Darren Baker
Editor
posted on 1 month ago — updated on 4 weeks ago
345
views
Pen & Sword Books
Publications
Fay Baker takes a look at a Pen and Sword offering covering the RAF Brüggen in War and Peace and titled ‘Seek and Strike’. 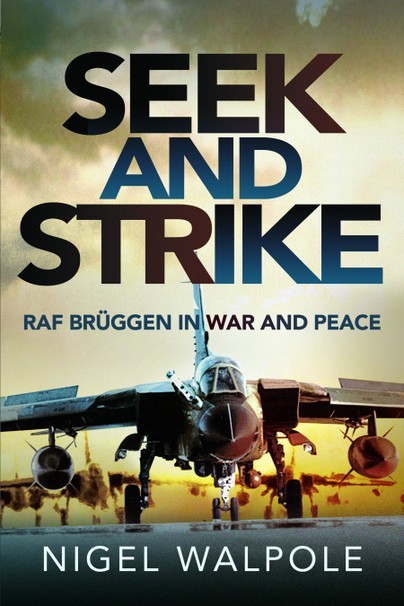 The following is taken from the Pen and Sword website:

Seek and Strike – RAF Brüggen in War and Peace is an anecdotal history of the largest RAF station in Germany. Optimized for a new breed of aircraft, and to NATO requirements, this huge airfield was cut out of the Elmpt Forest, on the German border with Holland, and completed in one year to become operational in 1953. First occupied by a fighter wing equipped with Vampires, Sabres and Hunters, its ‘Seek and Strike’ motif took on real meaning when the station re-equipped with strike, attack and reconnaissance Canberras, followed by strike/attack Phantoms, Jaguars and finally Tornados.

RAF Brüggen was at the forefront of the Cold War, during which innovation and determination brought it many accolades. It further distinguished itself in the Gulf War and continued to play its part in subsequent monitoring operations in that theatre; it was also the only Tornado Wing to operate directly from its home base during the Kosovo campaign.

This is the story of a station at war, of the men and women at the sharp end and in support. At work and play, it was they who made Brüggen what it was, excelling in all things and justifying a claim to have been RAF Germany’s ‘jewel in the crown’. With its closure in 2001, the RAF relinquished its last main operating base outside the UK. Brüggen was indeed ‘last and best’.

This offering from Pen and Sword is written by Nigel Walpole, looks at the history of RAF Brüggen. This is a soft backed book, of 356 pages. The paper has a satin finish, that display both text and images well. Contents of this title are covered as follows:

Chapter 1    Before the Beginning

This book is presented with a good mix of text and images, text is written in a good script that I found easy to read, despite being an older person who wears glasses!!. The story of Brüggen is covered in a logical manner, which prevents a lot of back and forth, if you are looking for a specific portion of history. The text provided covers an in depth history of the airfield, perhaps one of the aspects of the writing that will appeal most, is that the author has not stuck strictly to the story of the airfield, and has instead has tried to tell the life and times at Brüggen.

While this offering from Pan and Sword covering RAF Brüggen in war and peace provides little information that would be beneficial to the modeller, a number of the photographs do provide some reference for those wishing to display a model aircraft in a way other than flying or on its undercarriage. As there are a good number that show aircraft in a “How did you walk away from that? ”condition there are a great selection of photographs provided covering every aspect of life in the RAF. The result of all this is a book, that goes a long way to aide the reader to understand what it was like to serve with the RAF in Germany during the golden age of jets.