JPTRR
Editor
posted on 2 weeks ago — updated on 2 weeks ago
211
views
SBD DAUNTLESS vs A6M ZERO-SEN PACIFIC THEATER 1941-44 is a new book from Osprey Publishing LTD, examining the effectiveness of the SBD dive-bomber in the face of a Zero fighter attack, and the ability of a Zero to stop a Dauntless attack. 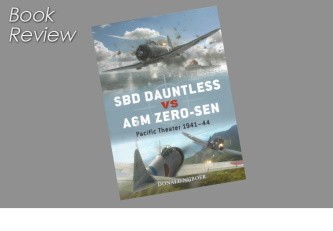 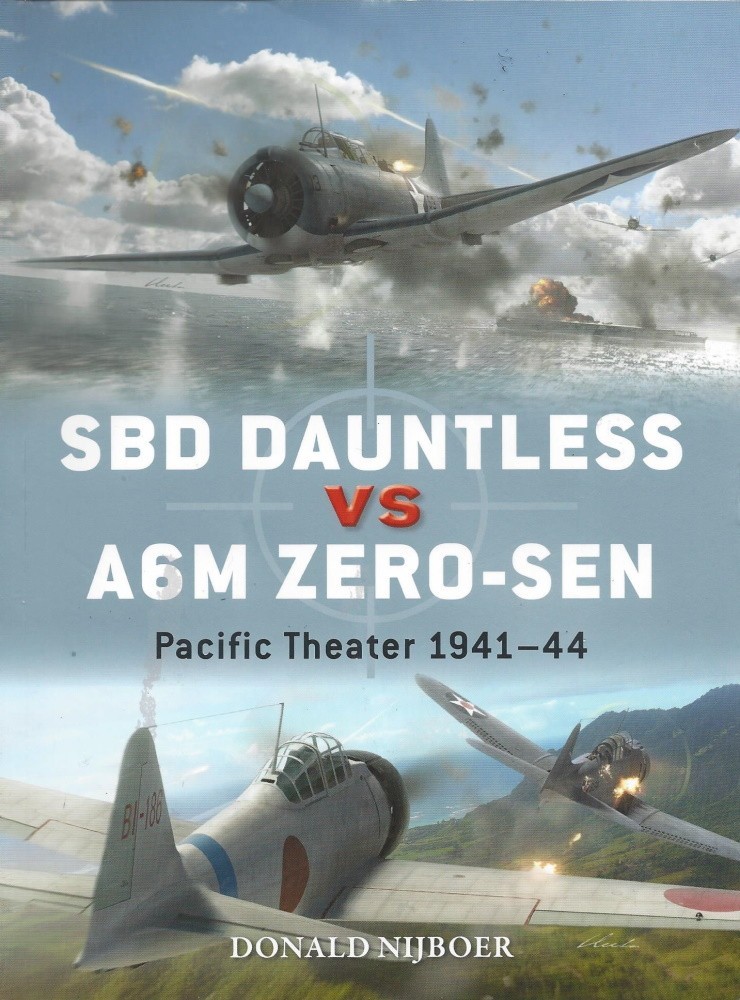 SBD Dauntless vs A6M Zero-sen is a new book in the series Duel, title number 115.  Authored by Donald Nijboer and illustrated by Jim Laurier and Gareth Hector, the book is 80 pages of content, including color and cutaway artwork.  You can find it catalogued by the Osprey Short Code DUE 115 or as ISBN 978-1-4728-4633-4.  While this review examines at the softcover book, it is also available in PDF and ePUB formats.  You can find this book on Osprey's website here:  SBD Dauntless vs A6M Zero-Sen.

If you have read much about Second World War fighters, you know that Japan’s Mitsubishi A6M Zero fighter blazed a legendary swath through Allied airpower in the first half of the war.  If you have read about early carrier battles, you have probably read that individual Dauntless dive-bomber crews racked up multiple Zeros kills in some fights.  Through first-hand accounts and after-action reports, the author navigates through generations of legend and myth to present a true account of these two pugilists’ record against the other.  Osprey writes of this title:

The SBD Dauntless dive-bomber was a key cog in the US Navy's aerial arsenal throughout the Pacific War. Although a product of aviation design in the mid to late 1930s, the type soldiered on even as more advanced aircraft were appearing from American factories as the war progressed. Despite its classification as a dive-bomber and rather dated appearance, the SBD Dauntless could more than handle its own against the feared A6M Zero-sen - a regular opponent, especially during the first 18 months of the campaign in the Pacific. The SBD was credited with 138 victories in aerial combat (principally in 1942), 107 of which were fighters and the rest bombers. Seven SBD units claimed five or more aerial victories, with future ace Lt(jg) John Leppla of VS-2 being credited with four victories while flying from the carrier USS Lexington during the Battle of the Coral Sea in May 1942. The Zero-sen came to symbolise Japan's military prowess during the early stages of the war in the Pacific, and it quickly became the world's premier carrier-based fighter - a title it would hold well into 1943. The psychological impact of the Zero-sen was so great that all Allied fighters were judged by the standards set by it. The aviators flying the A6M in 1941-42 were amongst the most experienced fighter pilots in the world, and they claimed a significant number of the SBDs destroyed while trying to defend their carriers from attack during the Battles of Coral Sea, Midway and Santa Cruz in 1942. While one was a dive-bomber and the other a nimble fighter, both met in combat many times, with the Dauntless proving an elusive and deadly target thanks to the tenacity and skill of the pilots and gunners manning the Douglas aircraft. While the Zero-sen was credited with shooting down many SBDs, the rugged dive-bomber gave as good as it got and emerged, not surprisingly, victorious on many occasions.

This book examines these aircraft in detail, exploring their history and development and contains accurate descriptions of the combats between the SBD Dauntless and Zero-sen throughout the first four carrier battles of 1942 and the Solomons Campaign.

So what is in this book?  Read on.

SBD Dauntless vs A6M Zero-sen is told through 11 chapters and subsections in 80 pages:

Well written and detailed text presents this comparison of these icon aircraft.   Several first-hand accounts spice up the narrative, i.e.;

…an enemy plane caught me unawares.  I felt a heavy thud, the scream of a bullet, and a hole two-inches wide opened in my canopy, only inches from my face…then I caught a glimpse of an enemy bomber – not a fighter! – which had caught me napping.  The Dauntless hung on its wing, racing for cloud cover.  The audacity of the enemy pilot was amazing; he had deliberately jumped four Zeros in a slow and lightly armed dive-bomber.

The Combatants presents the subject of training for US Navy and US Marine Corps pilot and radioman/gunner training, and Japanese pilot training. Two biographies are included; for the U.S. Navy is Stanley “Swede” Vejtasa and for the Japanese Navy, Kenji Okabe.  Each are concise one-page biographies of their career during and after the war.

In the chapter air crew training, very interesting details are presented such as Navy scout pilots received training for air-to-air fighting. (Bomber and torpedo planes were just trained for those disciplines.)  It includes interesting data, such as the Navy’s estimate of how far of course even a perfectly navigated airplane would go per hour, and therefore why the Dauntless had such a large fuel reserve. The US Navy invested a lot in direction finding, and that paid great dividends throughout the war.

In the technical part, the author does a very good job covering the Dauntless and Zeros in all of their makes, marks and models. Obviously, it is not a full technical book on that subject but it is still very useful.   The Strategic Situation  is a staple of all Duel books and it does a very good job of setting the stage for the clashes between SBDs and Zeros.

Combat  is the main event of a Duel book. It starts out with SBD tactics.  Zero tactics and Japanese lack of radar is discussed as well.  Carrier battles and the epic campaign for Guadalcanal demonstrate the effectiveness and failings of both aircraft.

Several color photographs dating from the 1940s brighten up the useful gallery of black-and-white images. One shows a lineup of newly repainted Marine Dauntless’ at Air Station Key West just before Pearl Harbor. Another color picture is of a Navy training airplane.  Yet another is of Lieutenant David R Barry, twice winner of the Navy Cross, showing him standing in front of the vertical stabilizer of a Dauntless – 5 another picture is a color photo of a rear gunner in an SBD training his single AN/M2 .30-cal. machine-gun.  Of the black-and-white images, while most are fairly well published, some are remarkable, i.e., a gun camera still of a F2A Buffalo attacking a SBD.

2.    Engaging the Enemy: callout box narrating and showing a SBD gunner and his twin AN-M2 .30-cal. mount, armor plate and Mk 9 gunsight, taking down a Zero.

4.    Standard SBD tactical formation: viewed from above and head-on.

8.    SBD Bombload illustrates the ordnance loading for the SBD as seen from below.

Those graphic components do an excellent job of enhancing and supporting the text.  Many scenes are inspirational to me for building a model of a particular aircraft, as well as diorama ideas. 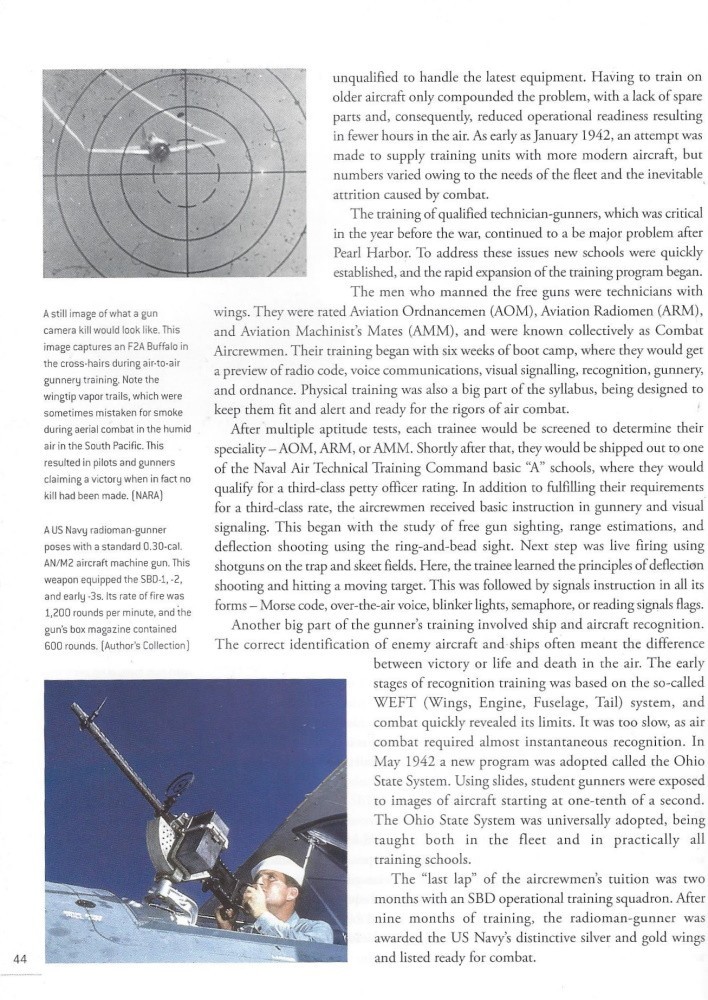 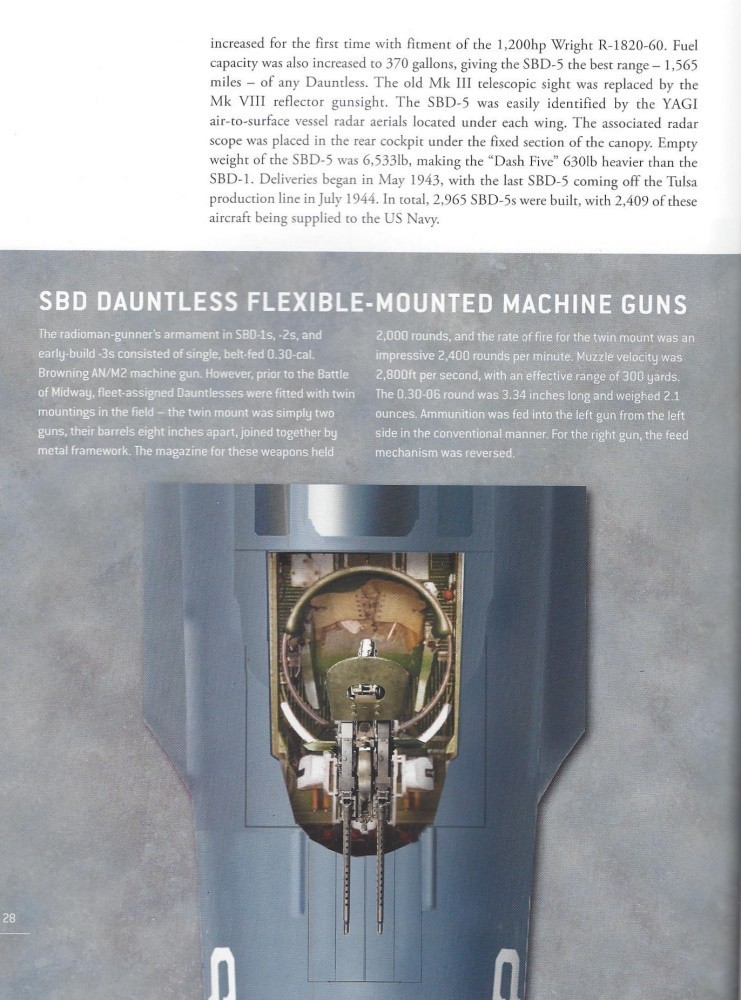 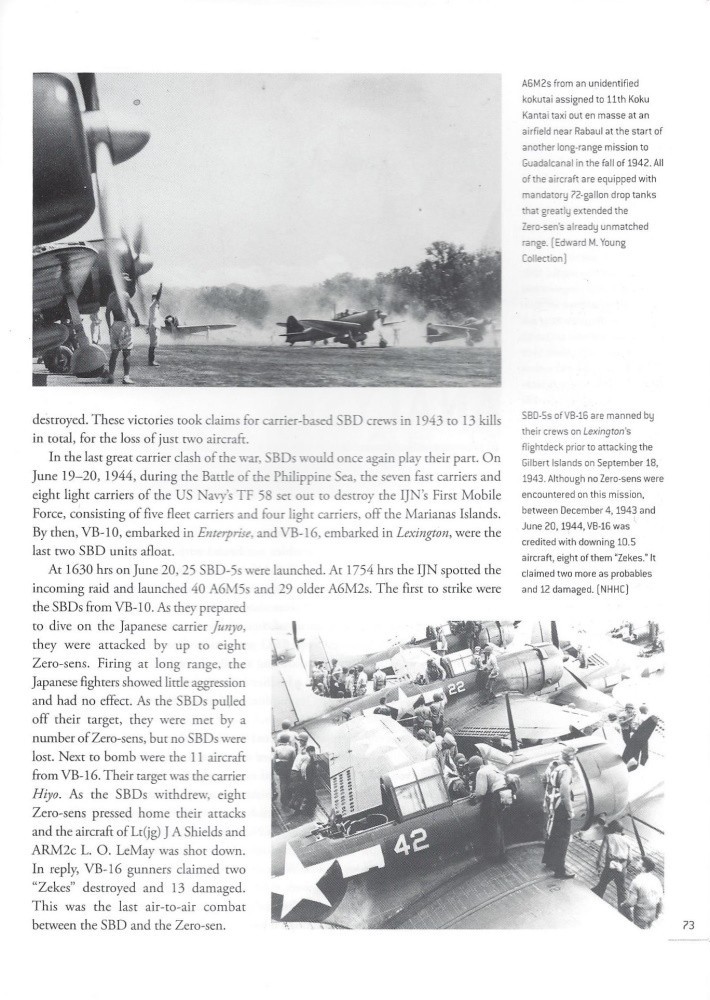 The Dauntless and the Zero - two legendary combat aircraft of the Pacific War - compared and combat records clarified.  What more could I ask for in a Duel book?  For decades I have read about individual Dauntlesses slaying numerous Zeros, and Japanese pilots describing all of their kills against SBDs.  This well researched book separates the fact from fiction.  The results might be upsetting to some readers.

Regardless, the text is thorough within the 80-page format.  The artwork and photographic component do an excellent job of enhancing and supporting the text.  I think that any modeler or historian with an interest in the Zero or Dauntless, or the 1942 carrier battles, will find this an essential addition to their bookshelf.  Recommended.