JPTRR
Editor
posted on 3 weeks ago — updated on 3 weeks ago
489
views
This volume by a renowned expert on wartime South West Pacific aviation covers all known land-based Corsair units operating in the Solomons from 1943-44, and features original color illustrations. 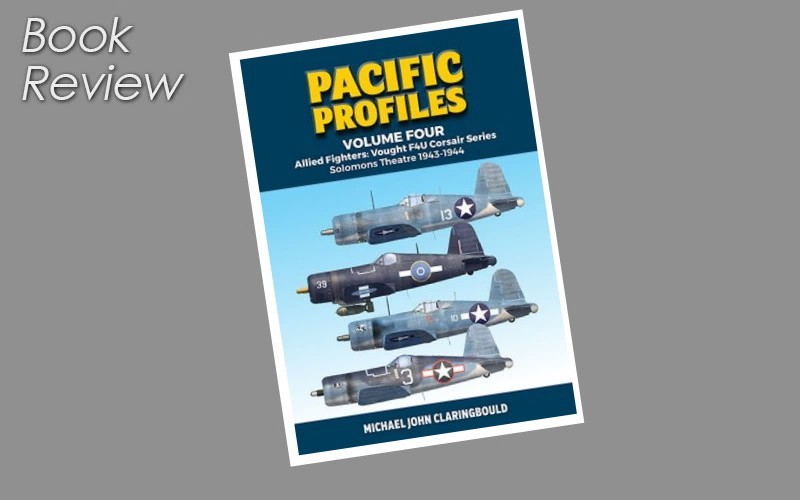 Pacific Profiles, Volume Four, Allied Fighters: Vought F4U Corsair Series, Solomons Theatre 1943-1944  is a new title from Avonmore Books, which specializes in high-quality printing of titles focusing on the early part of the air war in the South and South West Pacific.  It is authored and illustrated by world-renowned wartime Japanese aviation authority, former diplomat Michael John Claringbould, who was raised in Port Moresby.  Composed of 120 pages including the index, it is catalogued with ISBN 9780648926238.

This volume covers all known land-based Corsair units operating in the Solomons from 1943-44, and features original color illustrations. It addresses longstanding errors perpetuated for decades.  Fortunately, survivors of the era have emerged with a growing amount of original documents and relics.  An increasing cadre of modelers and researchers privy to such resources, dedicated to analyzing actual colors and markings, are establishing a more homogeneous consensus of the subject.

The seeds for author Claringbould’s passion were planted in 1976 when, "...an irritable priest at Alexishafen, on New Guinea's north coast, reluctantly allowed me to scour and photograph Japanese aircraft wrecks on the mission's land," where he found a Ki-43-II. "Curiosity caused me to start collecting all material on this arcane subject, but it was frustrating. Few publications, including Japanese-language ones, agreed on interpretations..." Thus he began decades of research to learn and clarify. Mr. Claringbould has authored 19 other titles. Most concern the South Pacific air war of which there are four volumes, focusing on Japanese Army fighters, Japanese Army Bombers, Transports & Miscellaneous Types, Allied medium bombers, and land-based Zero fighter  kokutai in the Solomons and New Guinea theaters. 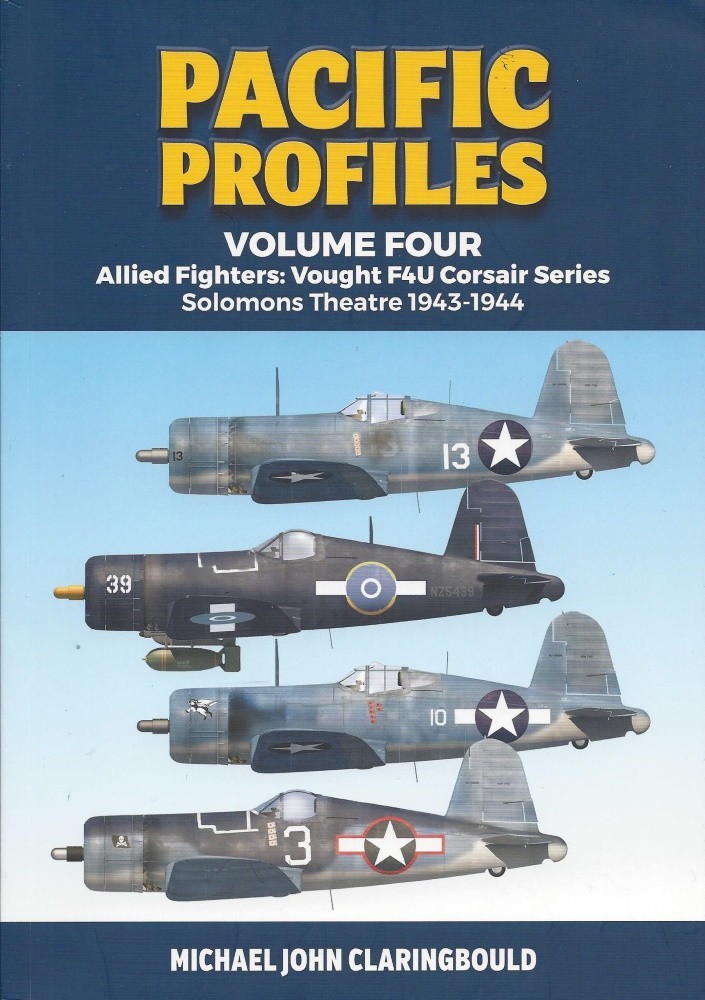 Introduction focuses on the Vought Corsair markings as found throughout the Solomons during the Rabaul campaign, beginning with its combat debut in the first year of combat starting in February 1943.  The author explains the lack of accurate color and markings knowledge of the 34 US Navy, US Marine Corps and RNZAF squadrons involved, as only two are well known, VMF-214 The Black Sheep, and VF-17 The Jolly Rogers.   In this he also addresses the Corsair mystique, examining the fact and fiction of its effectiveness, nicknames, and its performance against its main rival, the Mitsubishi Zero.

The chapter Technical Notes, Color Schemes and Markings is a full twelve pages, including color illustrations and tables.   We learn about the “birdcage” canopy, curing mechanical glitches and failures, VF-17’s and Brewster Aeronautical Corporation’s ingenuity to create a fighter-bomber, aircraft numbering, Buer (Bureau number), rotation of pilots and aircraft, squadron heraldry and emblems, and other topics.  The two common F4U camouflage schemes are explained as well as variations, as well as national insignia and aircraft identification markings.  Graphics include maps and two charts illustrating the buildup of Corsair squadrons from February 1943 through December 1944, relative to the date of the withdrawal of Japanese air power from Rabaul. It also includes a full-page glossary deciphering words, abbreviations and acronyms.

Twenty-one chapters of squadron histories begin with VF-17 The Jolly Rogers.  Each squadron history begins with a brief history of the unit, including commanding officers, training areas, base of arrival in-theater, date of commencement of operations, combat, and reequipping.  Each unit history includes the record of losses of pilots and aircraft, listing losses to aerial combat, ground fire and operational causes.   Each chapter continues with a treatise on the markings and colors of the aircraft.  Full-color profiles with accompanying captions and commentaries round out each chapter.  Accounts of events enrich many histories and some are fascinating, i.e., a pilot descending in his parachute lost a foot to the propeller of a strafing Zero, a horrible incident between Corsairs and PT boats, and Pappy Boyington’s cynical revision of an aircraft name.

While a squadron’s losses are included, total victory claims are not.  The author may note kills claimed during a fight but will compare those to known Japanese losses.  The problem of inaccurate kill records is examined in earlier chapters.  For its size, this book offers a great deal of information.

Modelers, artists, vintage aircraft owners and historians will find this book a treasure trove of reference material.  An impressive gallery of photos supports the text.  They span the gamut of professionally exposed and developed images to amateur pictures.  Some are stills taken from motion pictures.  Most are black-and-white, although seven original color photos are included.  The author chose excellent images that visually confirm insignias and odd camouflage patterns.  You may be a fascinated by these as am I.  The publisher website states:

A wide range of reference material was sourced to illustrate each profile, including colour movie film, post-war wreck surveys, official records, diaries and hundreds of photos.

Perhaps the most impressive part of the book is the original color artwork by the author of select Corsairs – 92 profiles and six other illustrations.  Mr. Claringbould, a certified pilot, draws upon his personal experience with building and restoring aircraft, and finding and studying actual aircraft wrecks.   With such insight the artist portrays weathering and wear.  Several aircraft are unique, such as a New Zealand F4U-1 spliced together from Corsairs of mismatched camouflaged.  If the F4U had nose art or a nickname, those are reproduced in a separate image.  Each profile is authenticated with a wartime photograph of the aircraft.   Each profile is accompanied by a caption listing, if known:

Many profiles include a narrative of the history of the aircraft, i.e., fate of aircraft and pilot, pilot flying it at the time of a notable event, and previous ’owner.’

3.     Twenty-one squadron and service insignia, plus the US Navy, Marine Corps and Chance-Vought insignias.

Further graphics include charts and maps: 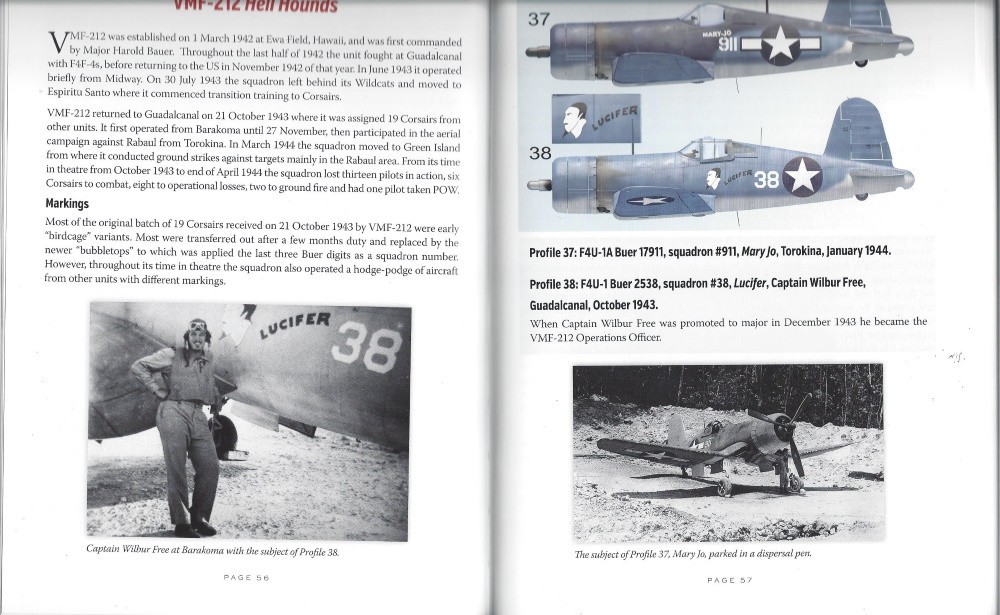 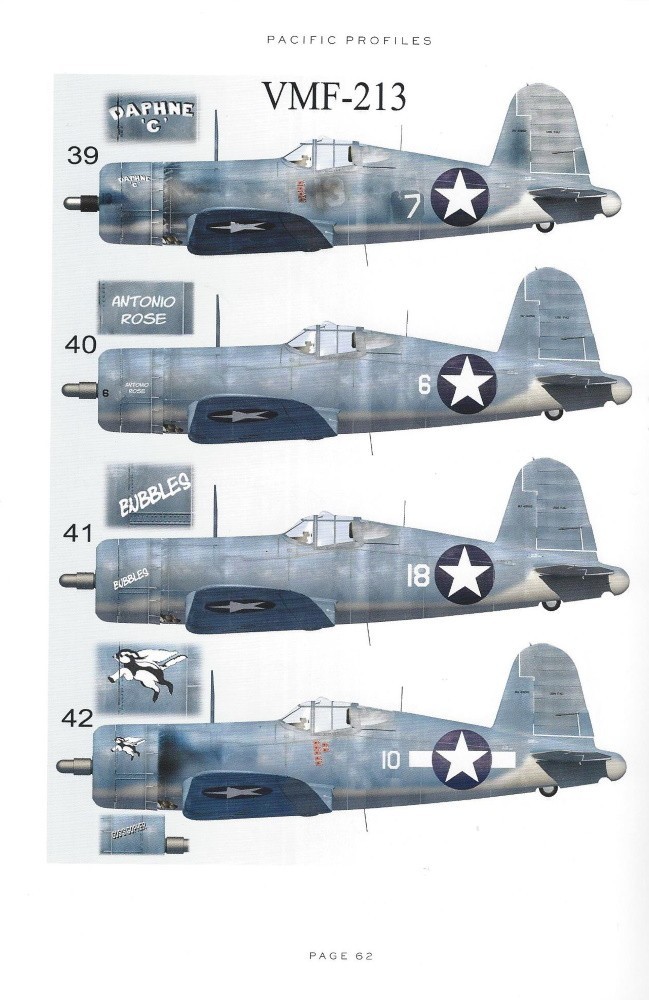 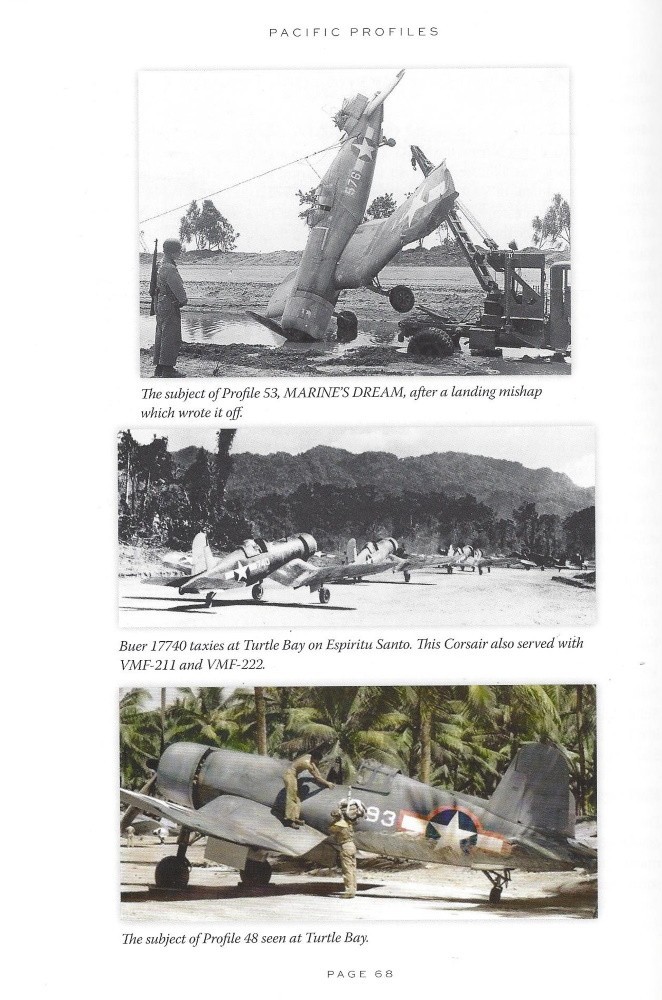 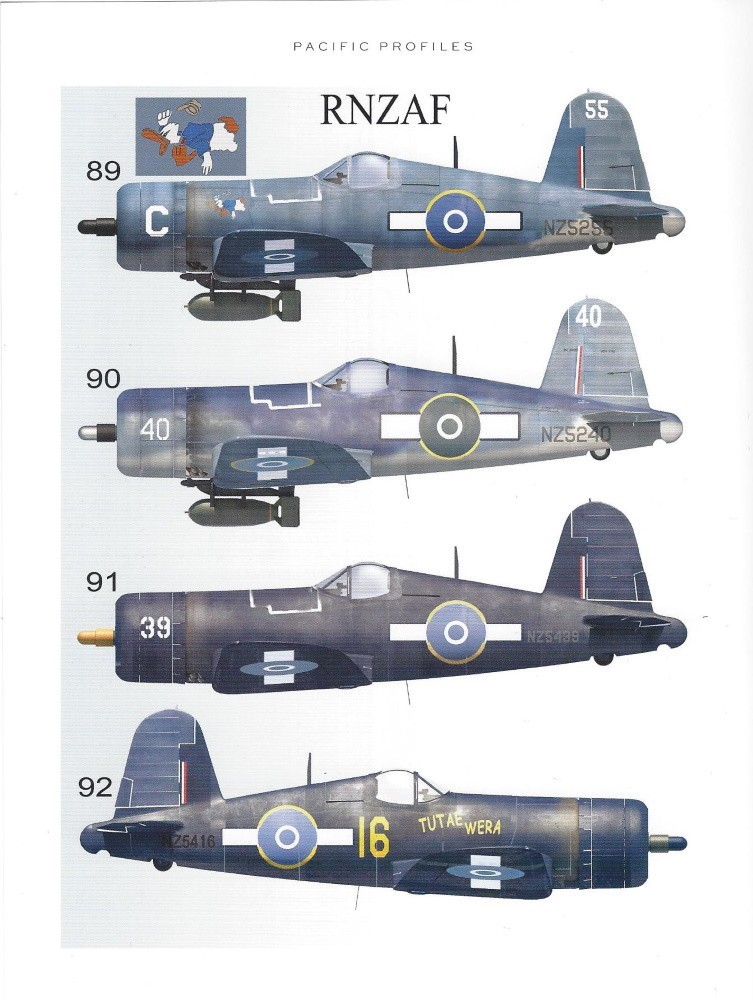 If you are a Corsair fan, Pacific Profiles, Volume Four, Allied Fighters: Vought F4U Corsair Series, Solomons Theatre 1943-1944 will be a valuable resource for historians, artists, and modelers.  This book is a highly researched objective overview of the F4U as deployed in the Solomons.  It does not attempt to promote nor detract from squadron combat records.   The authentic recounts of personal experiences and missions enhance the text.

The author brings us a fresh authentic and accurate look at color profiles and verifiable colors, patterns, insignias, and personal markings.  Personally, it inspires me to sweep my workbench clear and start building an early F4U with a unique camouflage pattern.

There are a few minor typos to be corrected in subsequent printings but nothing to mislead or confuse the reader.  Whether the reader is looking for information about a specific Corsair or generalities, this book will afford an increase in knowledge.  Recommended.

Many thanks to Avonmore Books for providing the sample for review.