JPTRR
Editor
posted on 1 year ago — updated on 5 months ago
1,583
views
From Avonmore Books, this volume by a renowned expert on World War Two South West Pacific aviation covers all known land-based Zero units operating in New Guinea and the Solomons from 1942-44, and features original color illustrations. It addresses longstanding errors perpetuated for decades, and includes new markings and information. 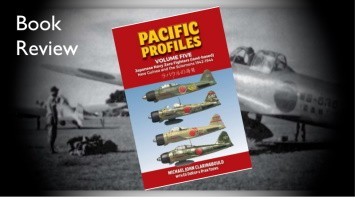 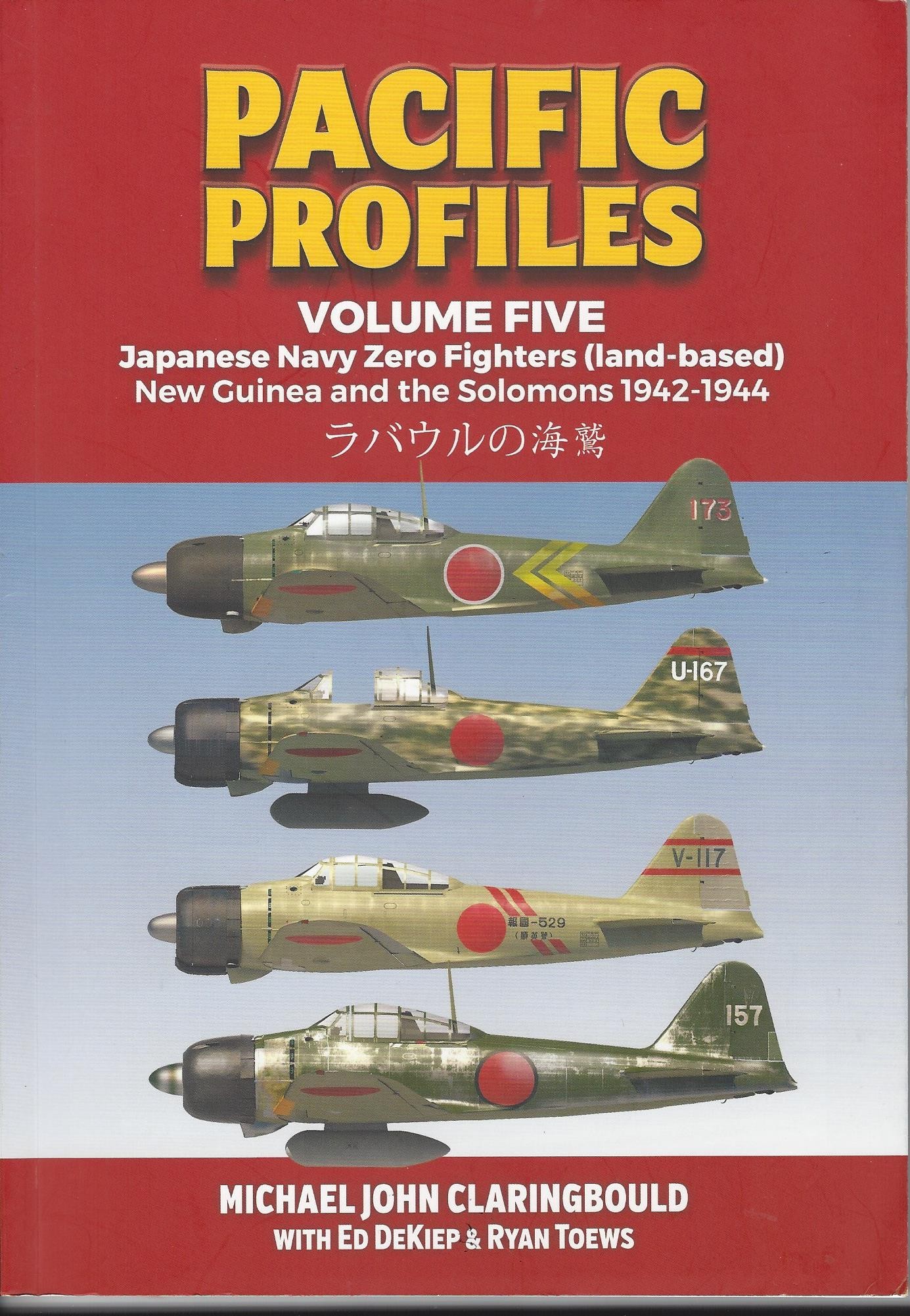 Fortunately, survivors of the era have emerged with a growing amount of surviving original documents and relics.  An increasing cadre of modelers and researchers privy to such resources, willing and able to translate from Japanese to English, dedicated to analyzing actual colors and markings, are establishing a more homogeneous consensus of the subject.

Pacific Profiles Volume Five Japanese Navy Zero Fighters (Land-based), New Guinea and the Solomons 1942-1944  is a recent title from Avonmore Books, which specializes in high-quality printing of titles focusing on the early part of the air war in the southwest Pacific. It is authored and illustrated by world-renowned wartime Japanese aviation expert and former diplomat Michael John Claringbould, who was raised in Port Moresby.  These subjects are a life-long pursuit of his.  Composed of 120 pages including the index, it is published by Avonmore Books and catalogued with ISBN 9780648926245.  In the author’s own words:

Each of the 101 profiles is supported by primary source material including colour photos, Japanese records, POW interrogations, technical reports, post-war wreck examinations and Allied intelligence summaries. These are accompanied by brief histories of each unit and notes on the changing nature of each unit's markings. How the late 1942Japanese Navy restructure impacted these units is also clarified, along with the rationale and meaning of the ensuing multifaceted markings systems.

The seeds for author Claringbould’s passion were planted in 1976 when, "...an irritable priest at Alexishafen, on New Guinea's north coast, reluctantly allowed me to scour and photograph Japanese aircraft wrecks on the mission's land," where he found a Ki-43-II. "Curiosity caused me to start collecting all material on this arcane subject, but it was frustrating. Few publications, including Japanese-language ones, agreed on interpretations..." Thus he began decades of research to learn and clarify.

Pacific Profiles Volume Five, Japanese Navy Zero Fighters (Land-based), New Guinea and the Solomons, 1942-1944  is brought to us through 13 chapters and sections in 120 pages:

If you have noticed writing on the fuselage of a Zero besides the usual military markings,that is a Hokoku aircraft.  Those Zeros were donated by patriotic organizations and featured legends painted on the fuselage.

Introduction focuses on the deployment of the Japanese Navy (IJN) Mitsubishi A6M Zero fighter to land bases throughout the “South Seas” theater of New Guinea, the Solomons, and their major base at Rabaul, beginning in early 1942.  Using a variety of sources, i.e., Admiral Kusaka Junichi’s diary, an order on 27 August 1943, the memoirs of Warrant Officer Iwamoto Tetsuzo to name a few, the author explains changes such as the November 1942 restructuring of IJN air power, the complex and confusing world of Zero markings, and the fact that gaps exist in the knowledge base.

IJN aircrew rank was indicated by their aircraft markings and those markings could change during transfers to new parent organizations.   IJN rank hierarchy is explained and accounts for some marking oddities.  Tail code assignments reflected which administrative organization a Kokutai belonged to, as well as tactical operational formations. Kokutai composition is also defined.  The fact that IJN deployed carrier-based Zeros to the land bases for temporary duty further confuses the marking and insignia subjects.  Zeros from a specific carrier had a unique camouflage pattern that has been attributed to land-based Zeros, and the same holds true for some fuselage markings.  Victory markings are addressed, too.  Who doesn’t like to be able to identify a particular Zero with a specific pilot?  The author also addresses this hot topic.

Mr. Claringbould has examined many Zero wrecks and addresses in detail the controversy of the correct color of early Zeros and the factors that create so many ideas concerning colors.  Climate effects on paint and field applications are examined.   FS colors are presented in the descriptions of Zero paints.  The author addresses that such problems are widely circulated in both Japanese and other language publications.

As if that is not confusing enough, four models of Zeros served in the area during 1942-44.  Some included sub-variants.  Some were repaired with cannibalized parts.  Many were transferred between units.

The chapter Technical Notes: Zero models in the South Seas is an excellent concise overview of the development of the iconic fighter.  Presented through eight pages, it contains color illustrations and tables.   We learn about the limitations of the Zero Model 21 and attempts to upgrade its performance.  New engines and apparatus, airframe redesigns, new weapons, all were tried: thicker wing skinning; greater ammunition capacity; clipped wingtips; field modifications not adapted.  Each model number is presented and the Japanese method of denoting changes is explained.  The effects on their performance are described, and well as the subsequent deployment of the models.  The author even includes a late 1942 order changing the nomenclature of the aircraft.  Common Zero camouflage schemes are explained as well as variations, as well as national insignia and aircraft identification markings.   Graphics include maps and charts illustrating the basing of Zero Kokutai. It also includes a two-page glossary deciphering words, abbreviations and acronyms.

Thirteen chapters of Kokutai histories begin with No. 2 Kokutai.  Each kokutai (“Ku”) history begins with a brief history of the unit including:

·       Date of commencement of operations

When available, each unit history includes the record of losses of pilots and aircraft (with name and cause when known).   Sometimes victory claims are mentioned, e.g., No. 201 Ku.  The author may note kills claimed during a fight but will compare those to known Japanese and Allied losses.  Each chapter continues with a treatise on the markings and colors of the aircraft.  Hokoku aircraft are identified by numbers and donors, when known. Interestingly, several were donated by Koreans and their legends, mistranslated for decades, are translated accurately.  While mentioned previously, chutai subunits and command markings for buntaichos and shotaichos are discussed.  Most Kokutai are presented through 1-3 pages of text and photos, with 4-8 illustrations.  The legendary Tainan Ku is presented through five pages documenting tail codes and colors with chutai and dates, and 16 profiles.

Full color profiles with accompanying captions and commentaries round out each chapter.  Anecdotes and information enrich many histories and some are fascinating, i.e., donation by a Korean fishery, the pilot who bellied in on Guadalcanal and escaped to Rabaul on a destroyer (providing us with a modern color photo of the wreck), detachments named for specific pilots.

For a book this size, it is a wealth of information.

An impressive gallery of photos supports the text.  They span the gamut of professionally exposed and developed images to amateur pictures.  Some are stills taken from motion pictures.  Most are black-and-white with seven color photos, including three modern photos by the author.  The author chose excellent images that visually confirm insignias and odd camouflage patterns.  You may be a fascinated by these as am I.  The publisher website states:

A wide range of reference material was sourced to illustrate each profile including post-war wreck surveys, official records, diaries and hundreds of photos.

One extraordinary image is a color photo taken in 2020; after turning over a Zero wreck, we see the original paint, protected from the elements for 78 years.

Perhaps the most impressive part of the book is the original color artwork by the author of select Zeros – 101 profiles and 15 other illustrations.  The artist portrays weathering and wear.  If the Zero had Hokoku or unique markings, those are reproduced in a separate image.  Many profiles are authenticated with a wartime photograph of the aircraft.  Each profile is accompanied by a caption listing, if known:

·       Hokoku inscription if present, both on aircraft and separate for clarity.

·       Assigned pilot, including the name in Japanese writing.

Many profiles include a narrative of the history of the aircraft, most consist of a line or two.  The famous Zeke thought to be flown by “the devil,” ace Nishizawa, is described with half a page.  Several illustrations are accompanied by photographs – some in color – of the subject aircraft.

1.     Fuselage Stencils, including placement on a profile of an A6M2:

a.     Center-of-gravity stencils (never seen this before)

e.     Spinner rotation markings for disassembly (never seen this before, either)

12. No. 204 Ku: 8 profiles and a planform showing unusual field camouflage.

18. Flight scene: A Model 52landing with Tavurvur volcano in the background.

Further graphics include charts and maps:

a.     Zero Airfields (including emergency) 1942-44 showing the South Seas theater with Zero bases and Allied bases.

I recommend this book solely for the visual galleries. 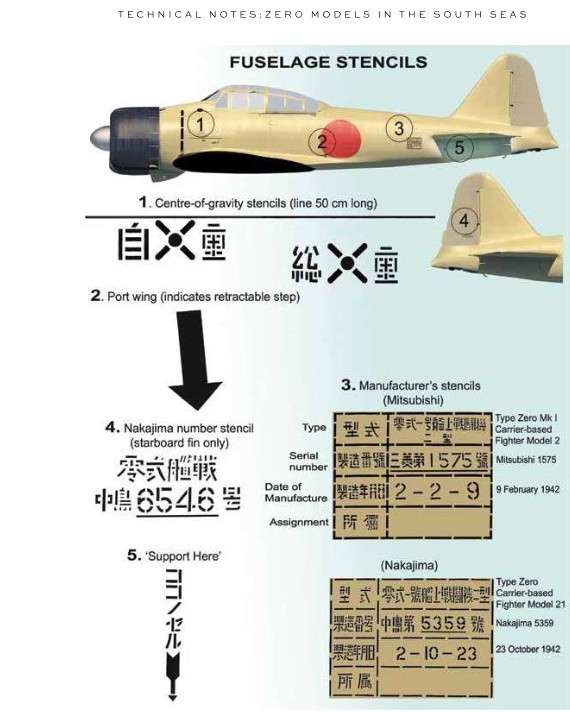 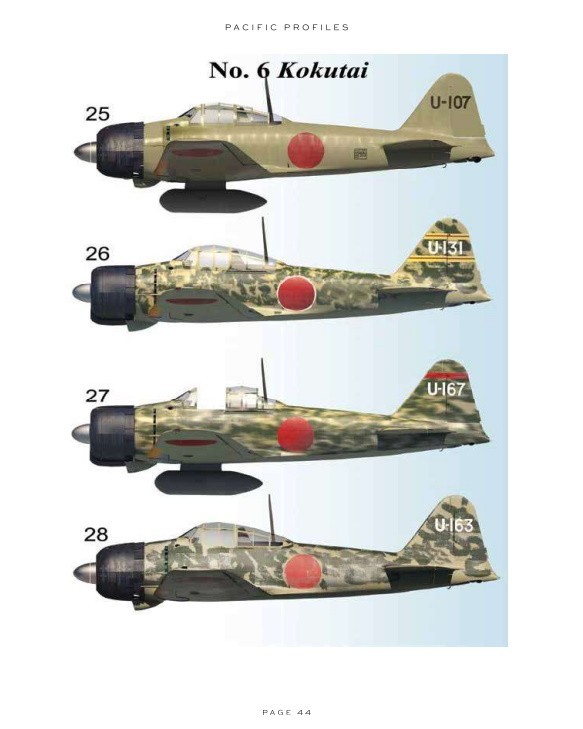 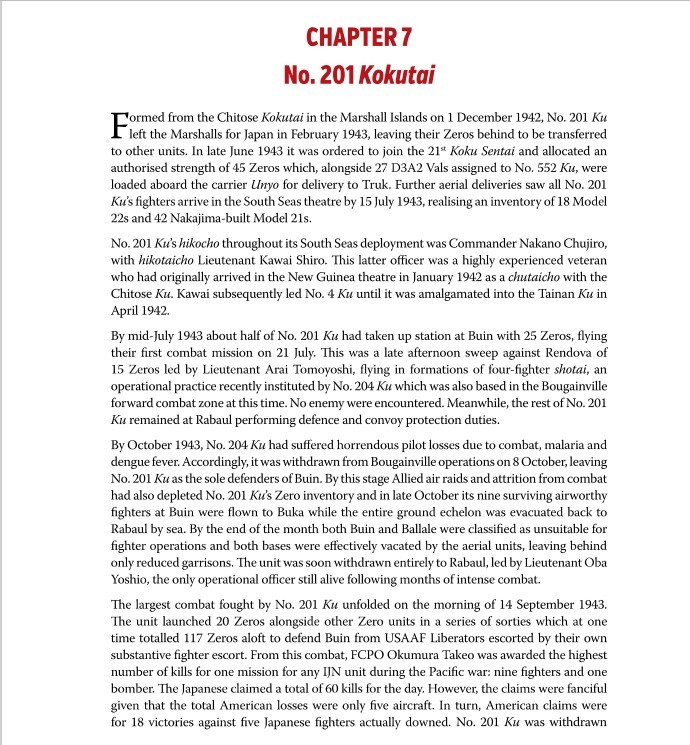 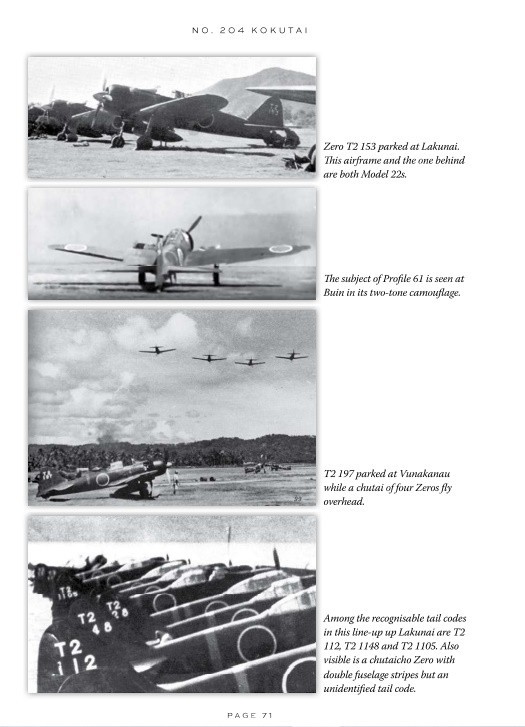 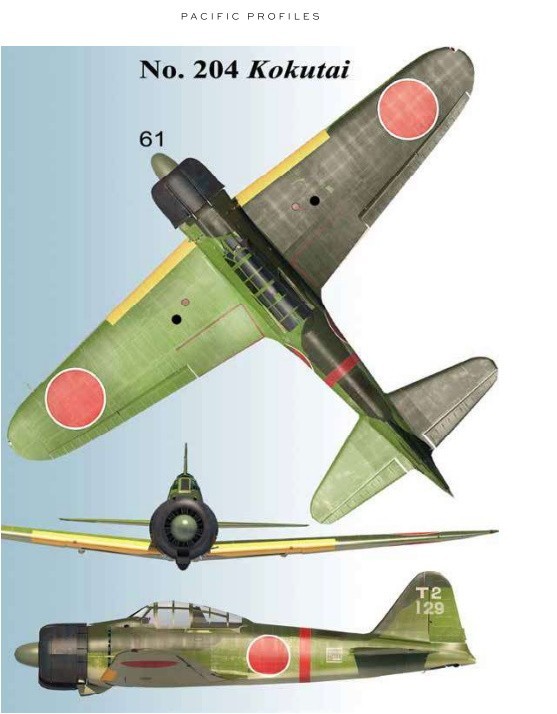 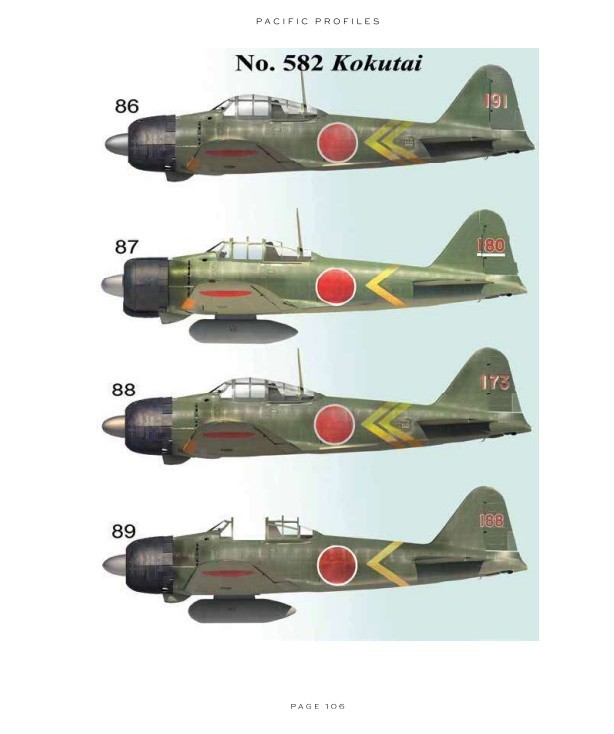 Pacific Profiles Volume Five Japanese Navy Zero Fighters (Land-based) New Guinea and the Solomons 1942-1944 is an exceptionally valuable resource for historians, artists, and modelers.  Highly researched through previously untapped primary sources, it provides an English language study of the complex and confusing deployment of Japan’s Zero fighters in the Southern Seas theater of the Solomons and New Guinea.  It does not attempt to promote nor detract from kokutai combat records.

Mr. Claringbould is a man on a passionate mission to clarify and discover the stories of the South Pacific air war.  Just like his previous profile on the F4U Corsair, the author brings us a fresh authentic and accurate look at color profiles and verifiable colors, patterns, insignias and personal markings, inspiring me to sweep my workbench clear and start building a Zero, with or without these unique camouflage or markings.

I cannot be more enthusiastic for this book and I believe students and modelers of the Japanese Navy fighter kokutai facing the Allies over the Solomons and New Guinea will be, too.  Highly recommended.

Many thanks to Avonmore Books for providing the sample for review.

Please remember to mention to retailers and manufacturers that you saw this book here - on AEROSCALE.