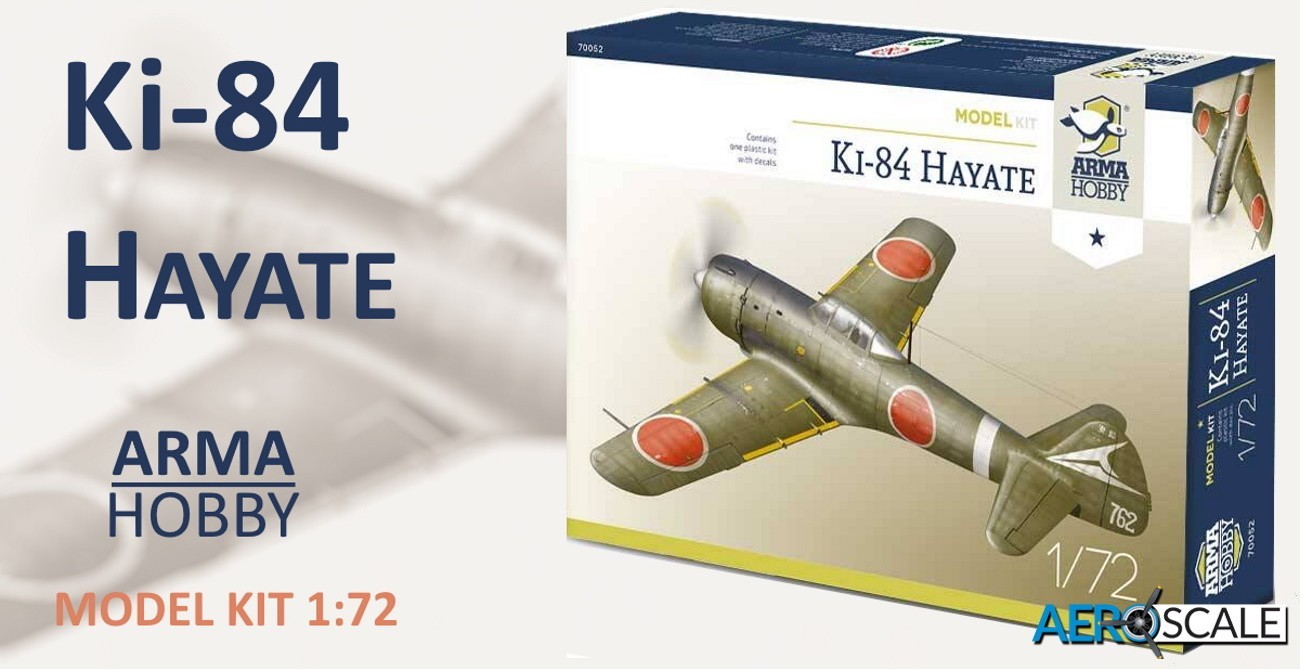 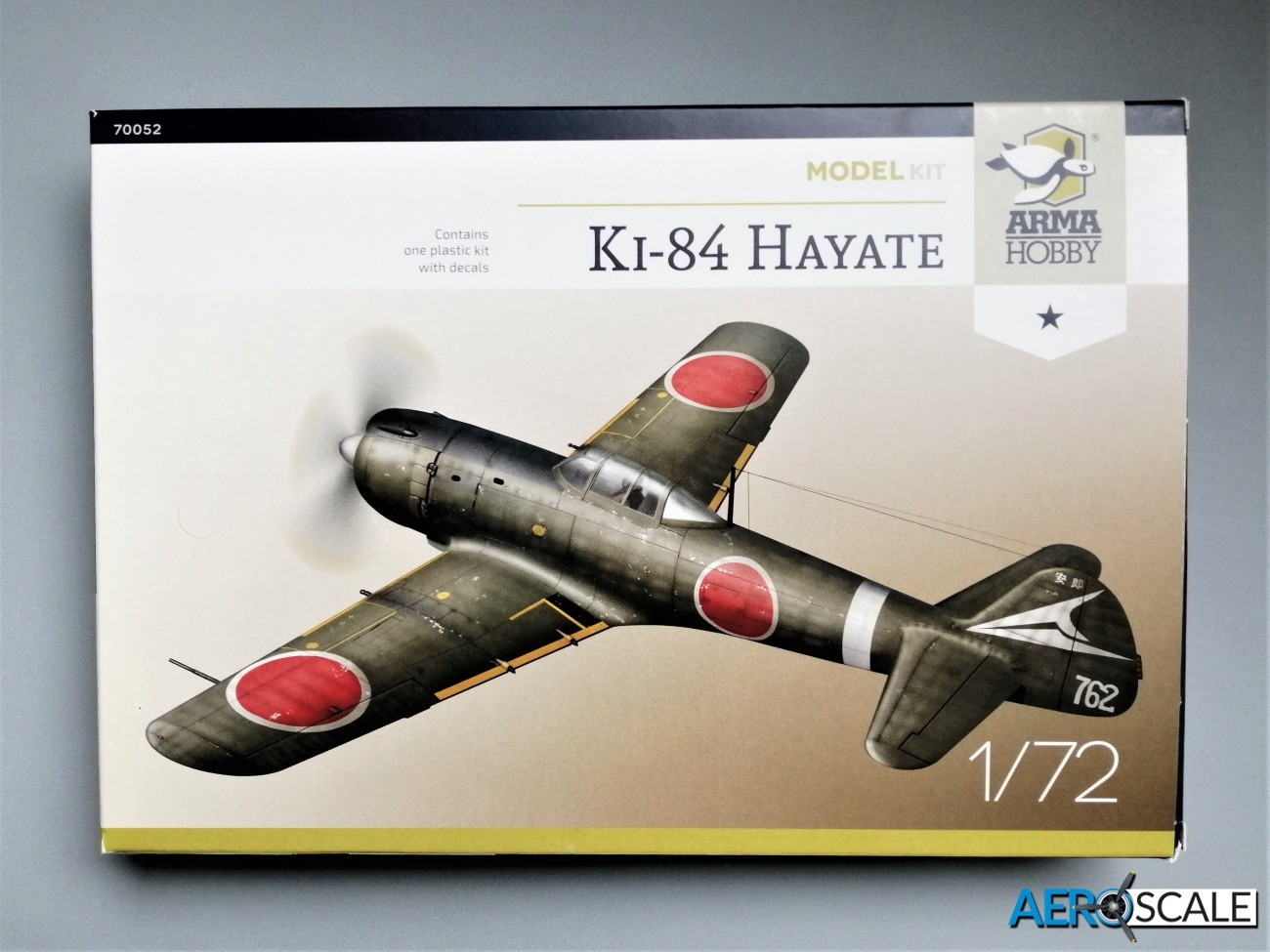 Nakajima Ki-84 Hayate was operated by the Imperial Japanese Army Air Service for the last two years of WWII. It was officially designated the Army Type 4 Fighter, though it was given the name Hayate, translated as ‘Gale’. The Allies designated its type as ‘Frank’. It was a progression from the Nakajima Ki-43 Hayabusa ‘Oscar’ in order to counter the superior performance of Allied aircraft. The Ki-84 boasted high speeds and excellent manoeuvrability with armament that provided quite a punch. Compared to its popular predecessor, the Ki-84 offered better climb rate, improved armament and armour and all gained at very little cost to its predecessor’s high manoeuvrability.  Acknowledged to be the finest mass-produced fighter the Japanese produced during WWII. The Ki-84 like many thoroughbreds needed care in handling and maintenance. The landing gear was not strong and could easily collapse in a heavy landing. The Ha-45 Homare engine needed constant maintenance to preserve its performance. The dwindling accessibility of quality fuel was a problem as well as a shortage of experienced pilots. Its performance at altitude was disappointing. There were numerous plans to address the problem, including the use of other radial engines and as well as superchargers. None of these possible solutions were ever tested. After the war Ki-84 with the Ha-45 Homare was tested in the States using 92 octane AvGas and methanol injection and it achieved a speed of 427 mph [687 km/h] at 20,000 ft, so it was no slouch. 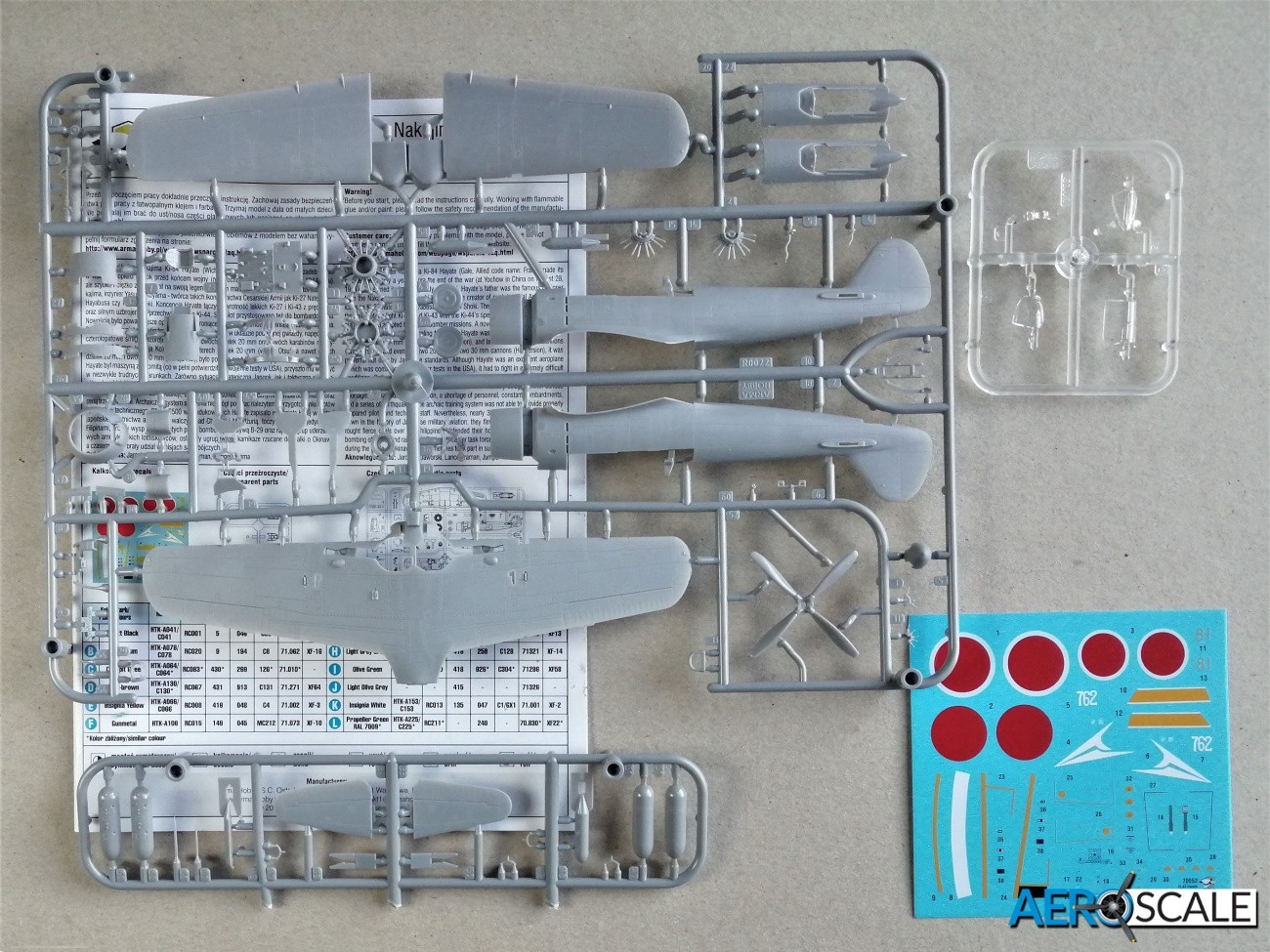 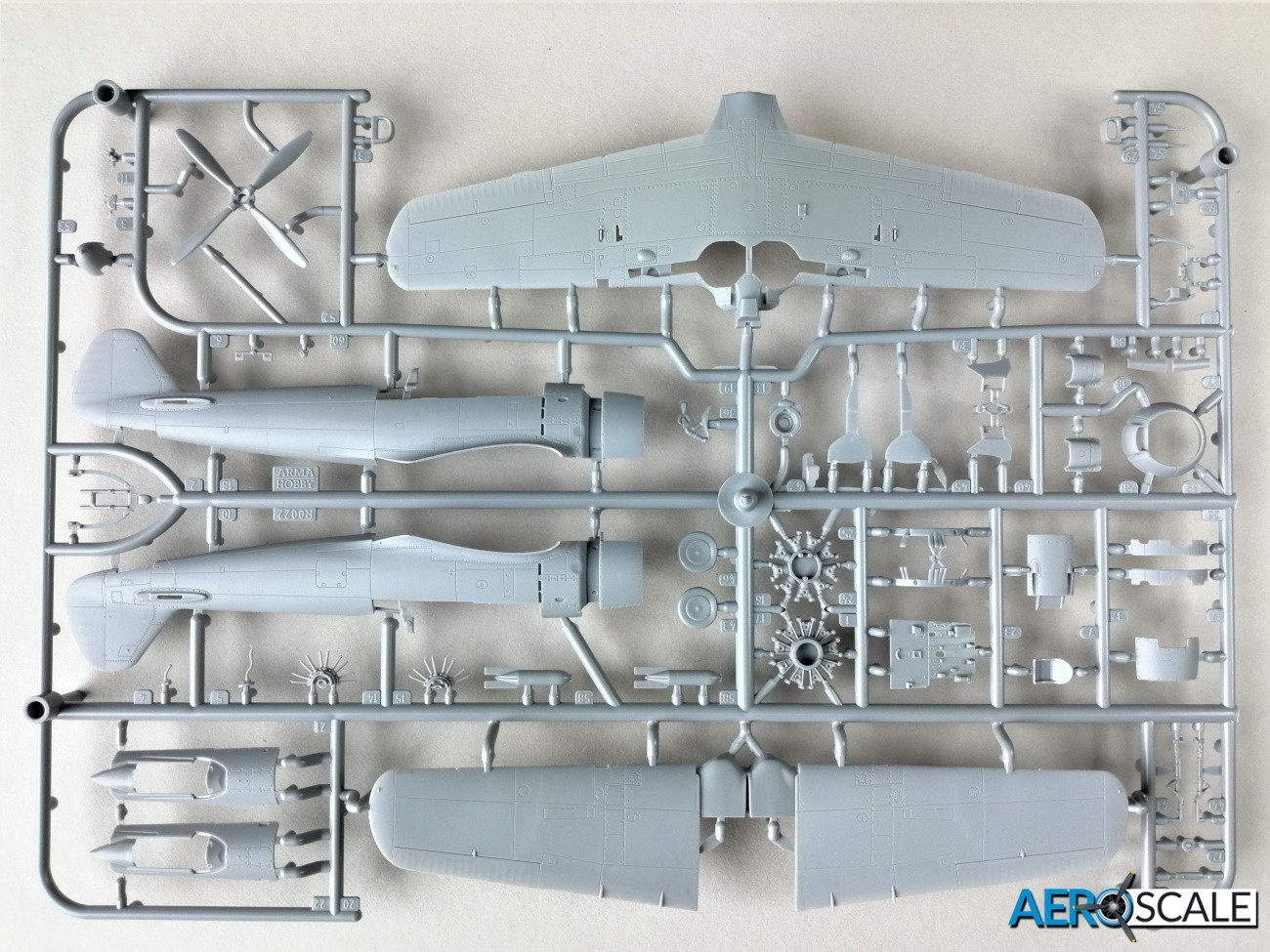 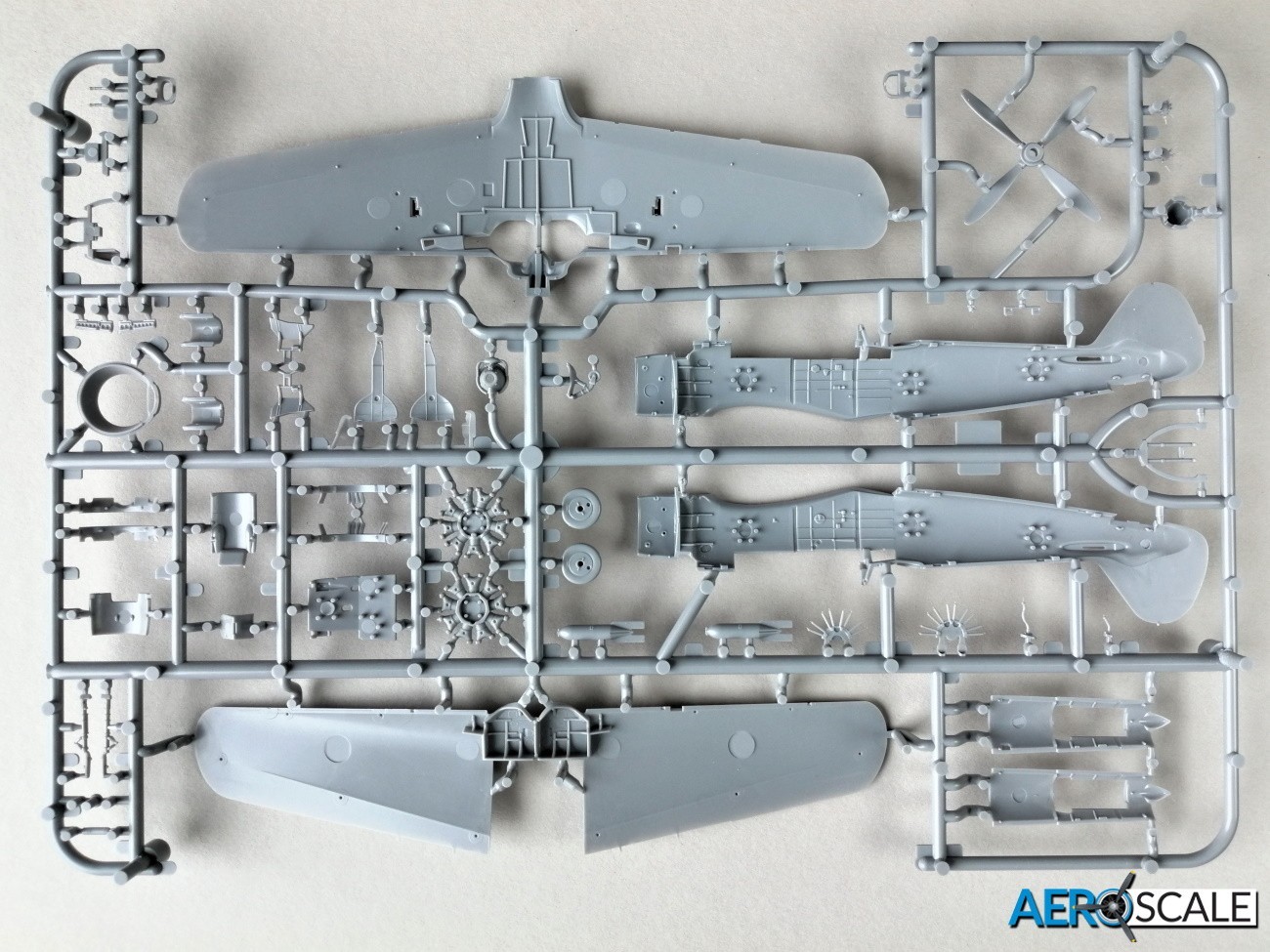 The Ki-84 Hayate saw a lot of action against the Americans in the Pacific. It was quickly realised it was a very capable fighter and not one to underestimate particularly at low and medium altitudes. As with all fighter the Ki-84 Hayate was adapted to carry bombs and used its excellent speed to good effect on hit and run raids against the advancing American forces. The final year of the war saw the Hayate in the ever-increasing desperate effort to protect the homeland. In total of 3,514 Ki-84 Hayate were built. 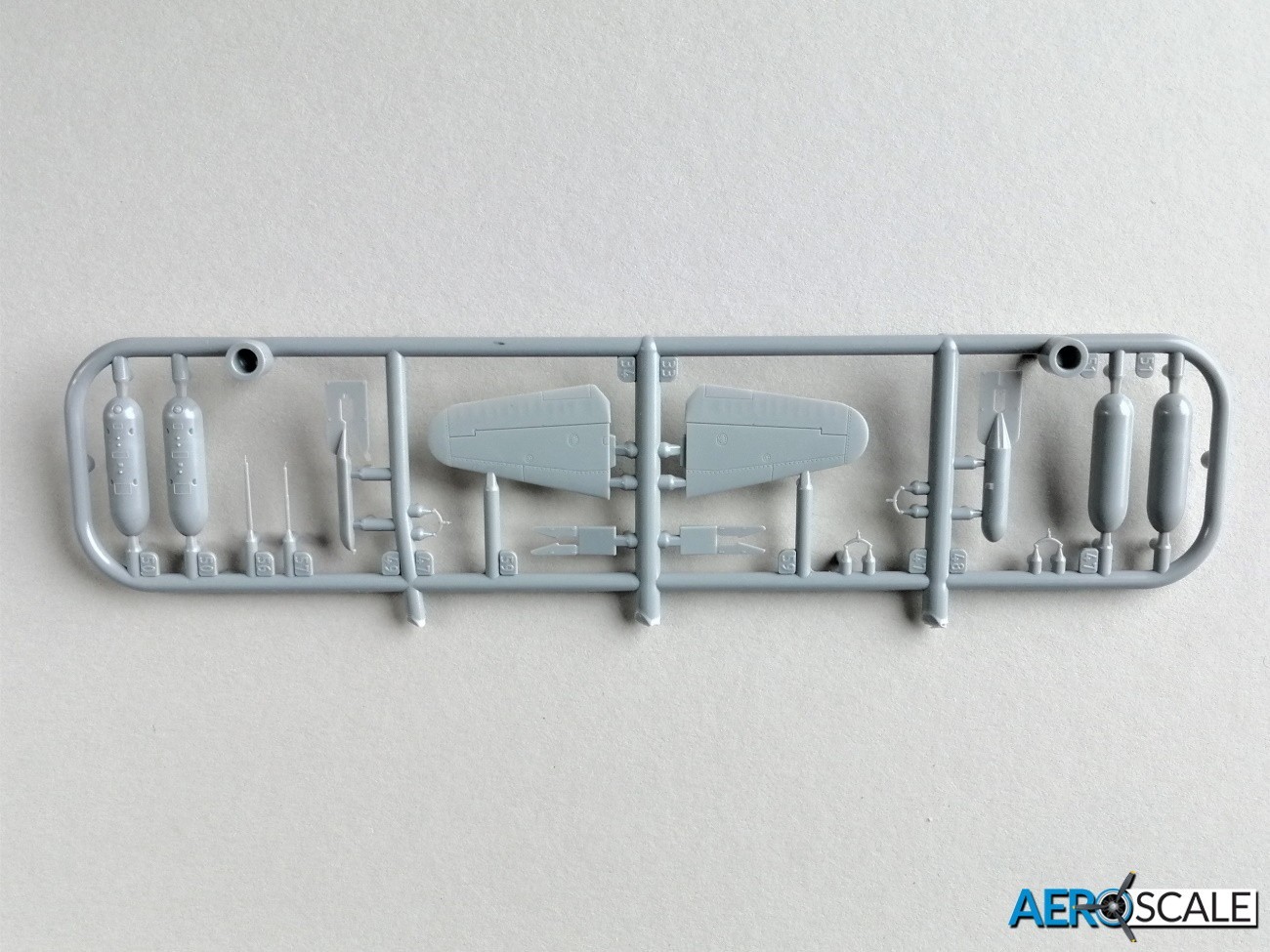 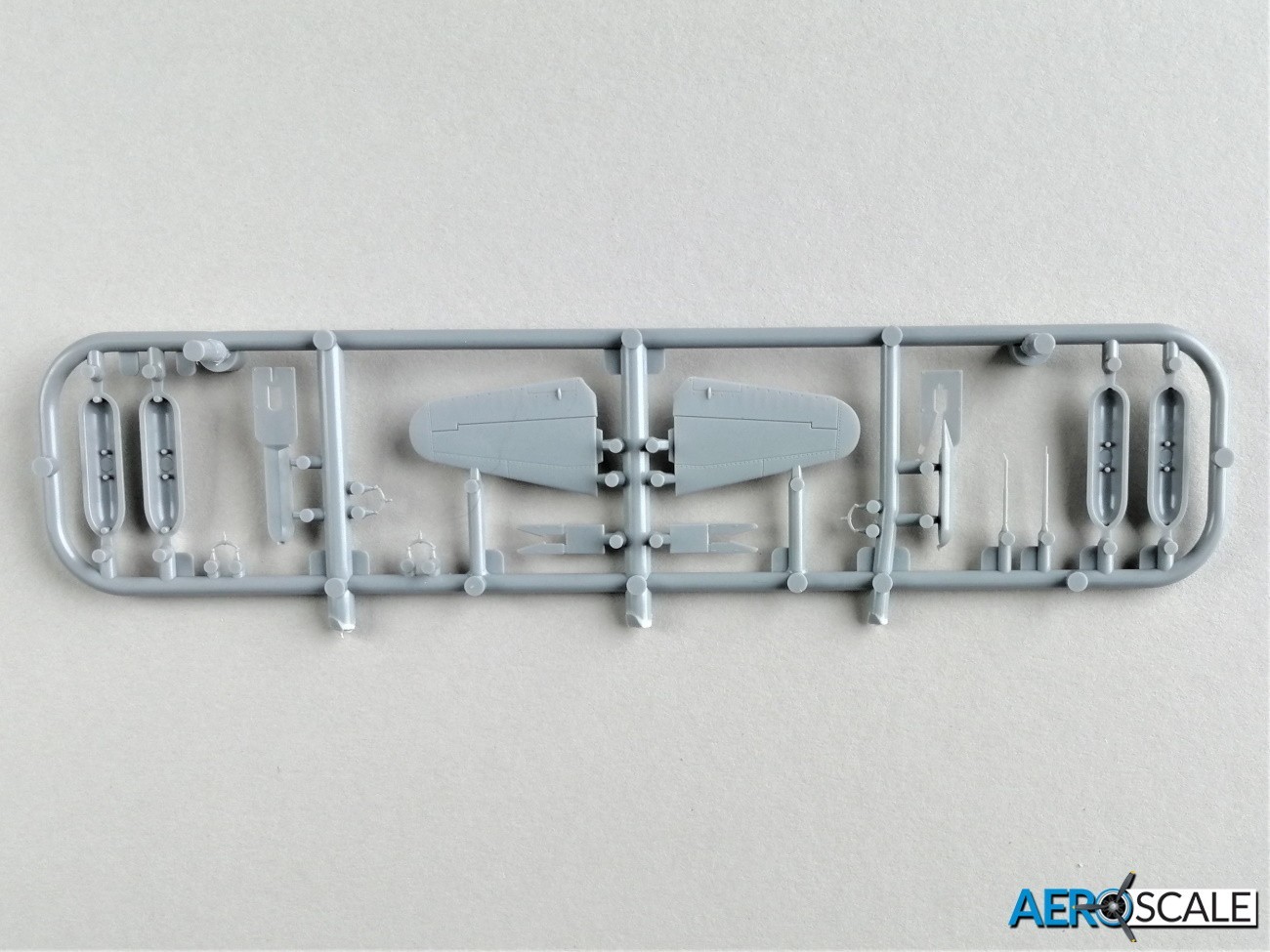 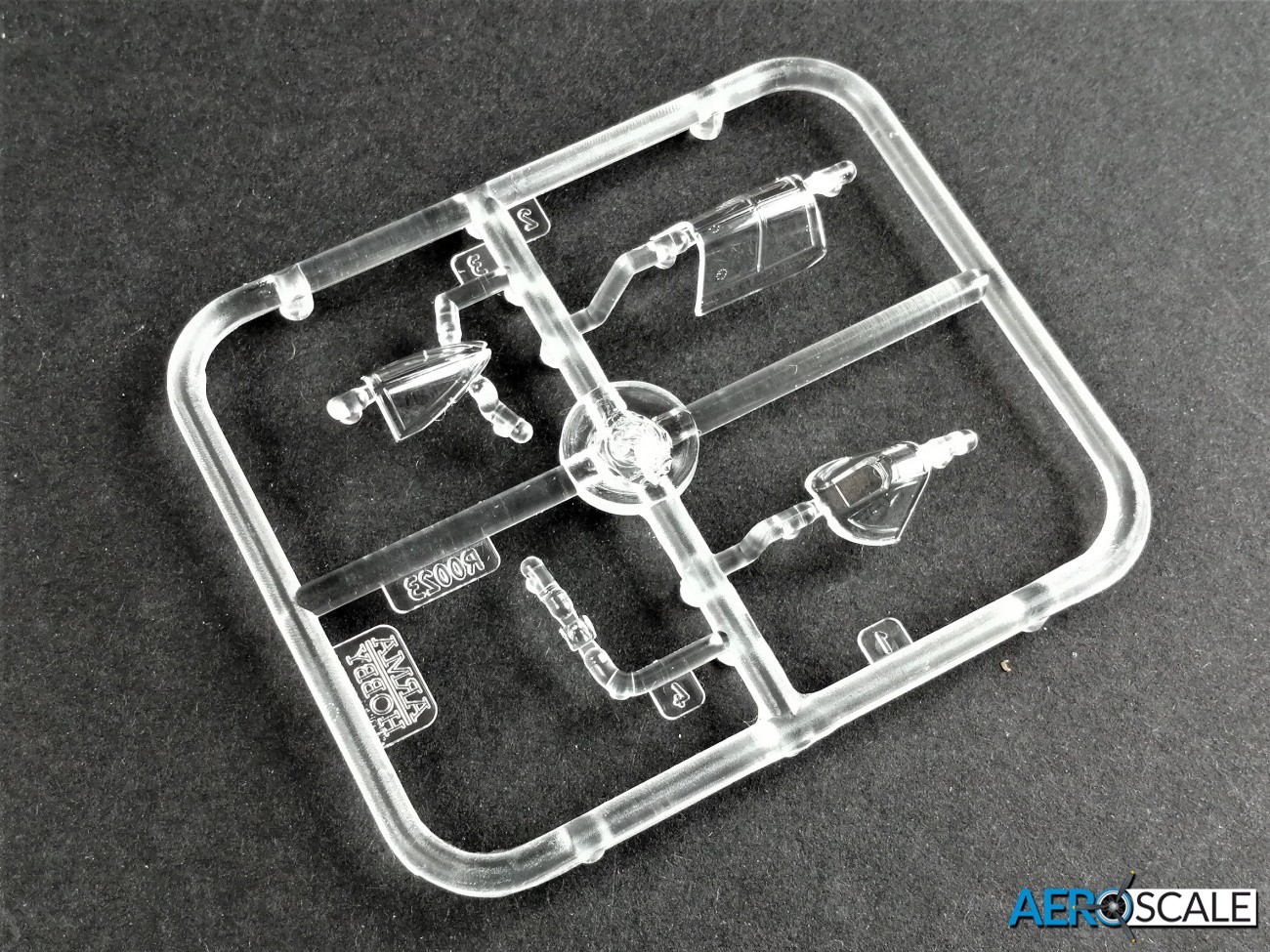 This edition by Arma Hobby features the Nakajima Ki-84 Hayate Ko. The Ko was the most widely produced Ki-84 armed with two 12.7 mm machine guns and two 20mm cannons all fitted in the wings. The other version of the Ki-84 Hayate is the Otsu which was fitted with four wing mounted 20mm cannons, though only a handful were built. This being a Model Kit version means there are only plastic parts, decals and instructions inside the box. 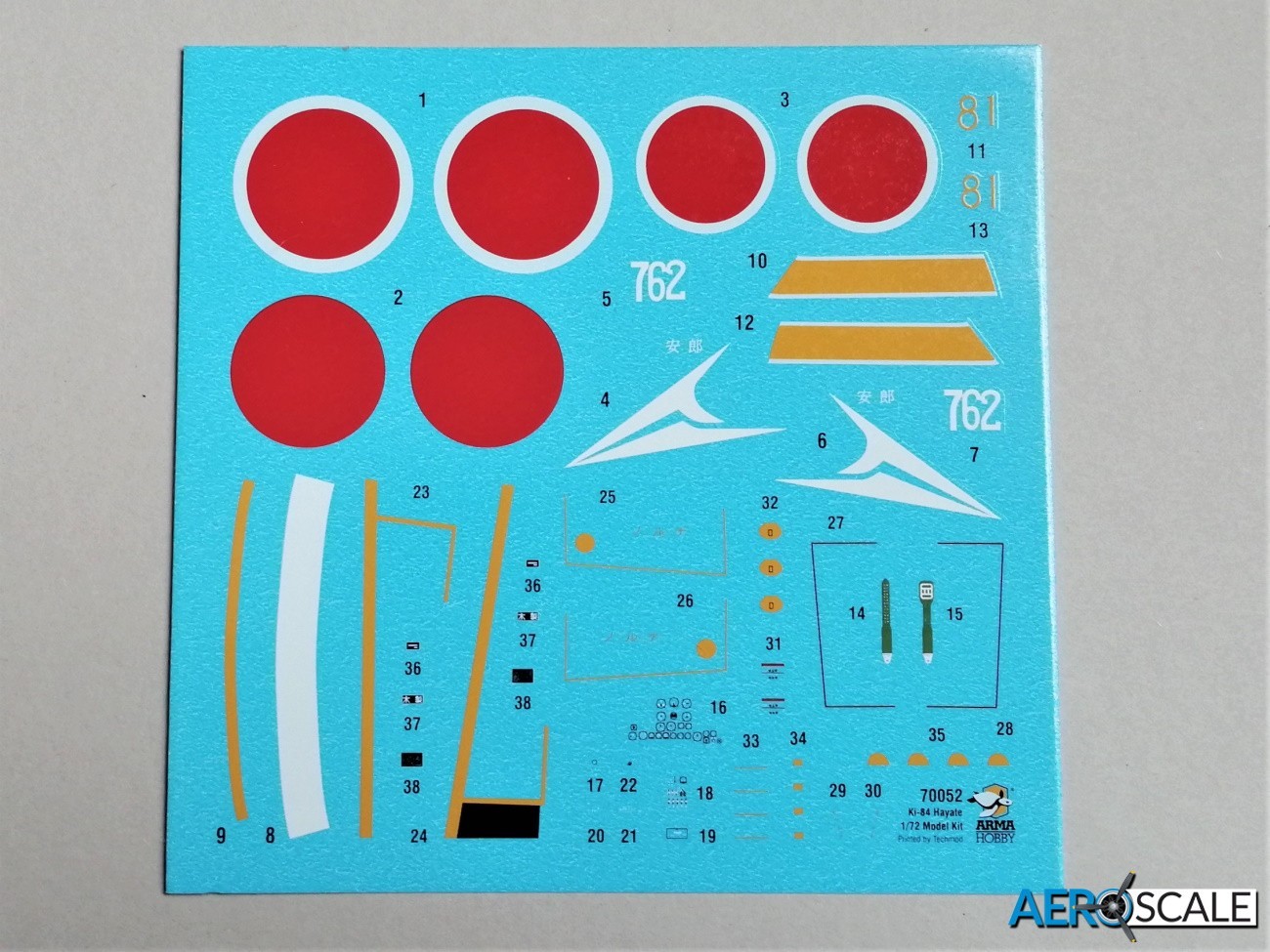 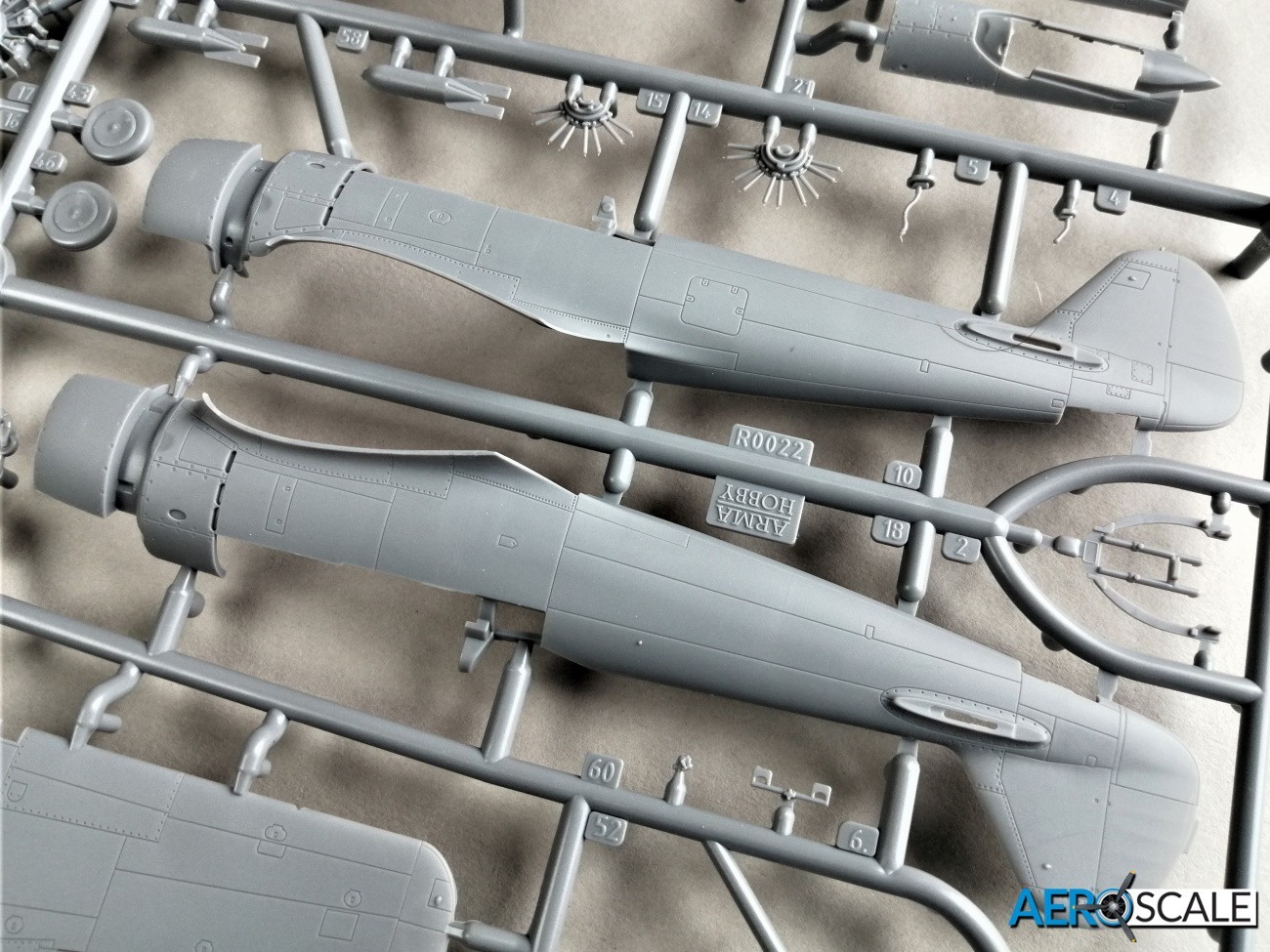 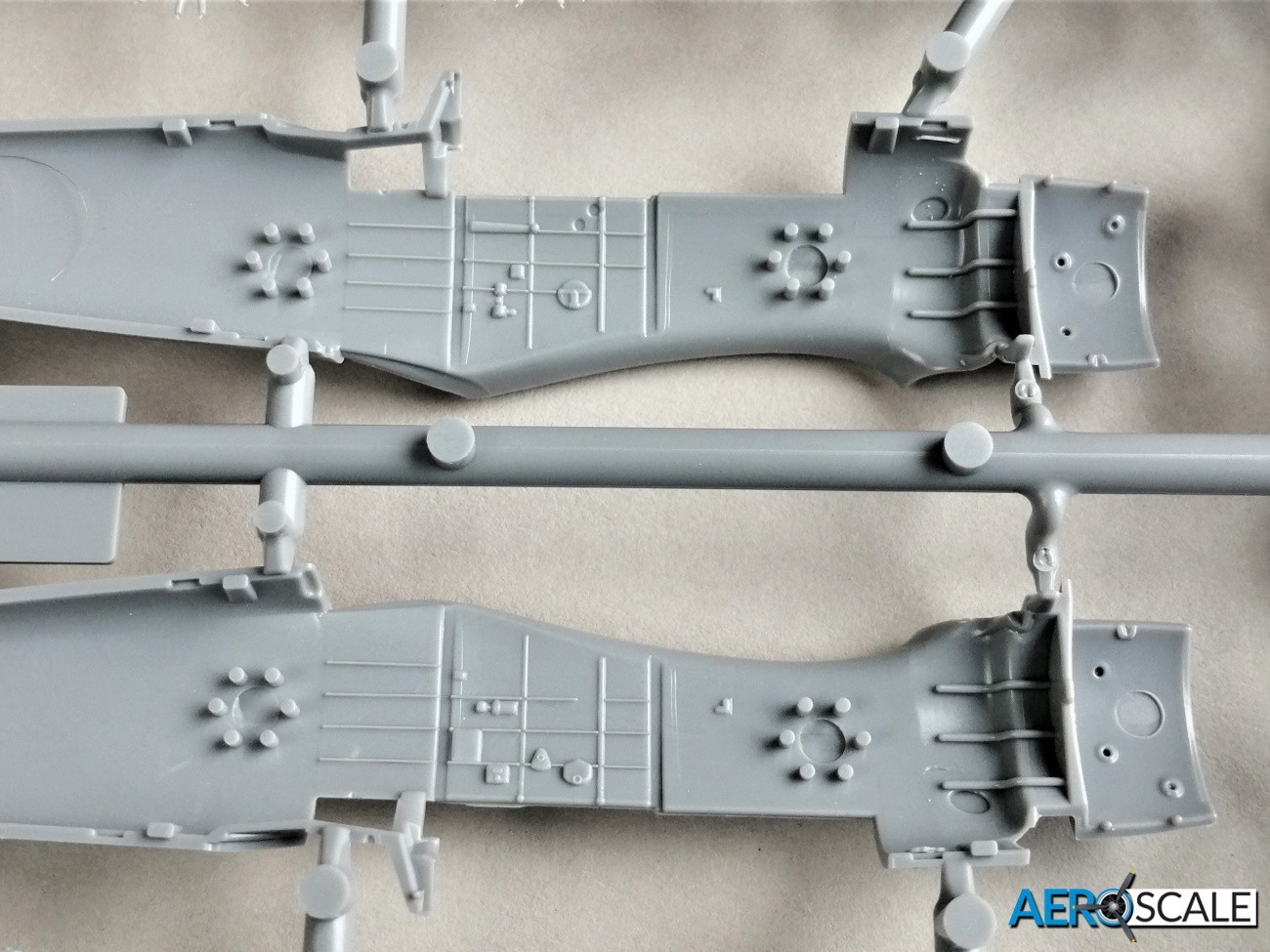 The contents of the kit are contained in a side opening box. All the contents are placed in a single bag and inside are separately packed clear parts with the decals placed inside the instructions. Taking the sprues out of the bag it’s clear that Arma Hobby is maintaining their excellent reputation with the quality of the raised and recessed detail. The panel lines are sharp, consistent and quite subtle. There are locating pins included on the main parts. 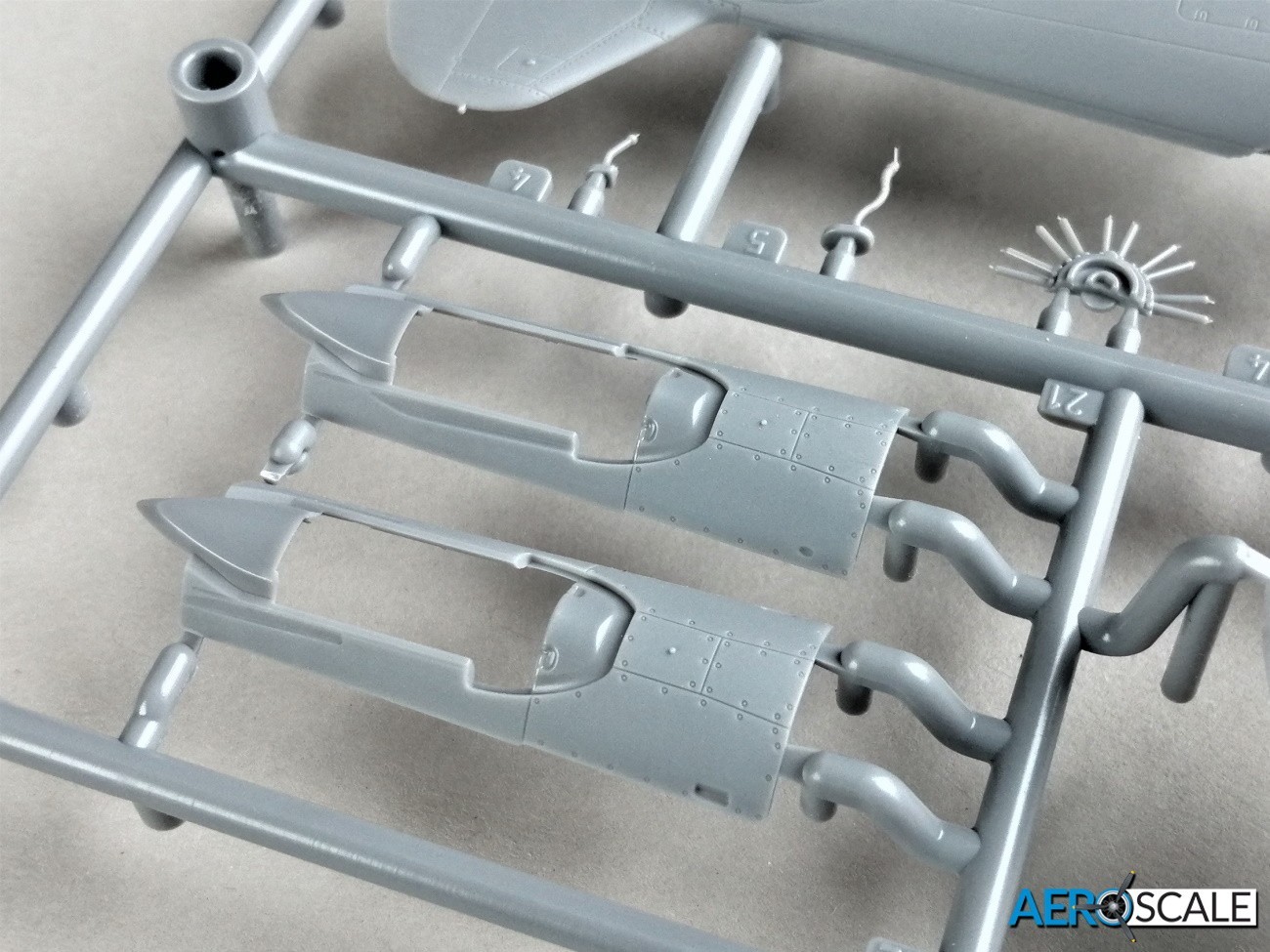 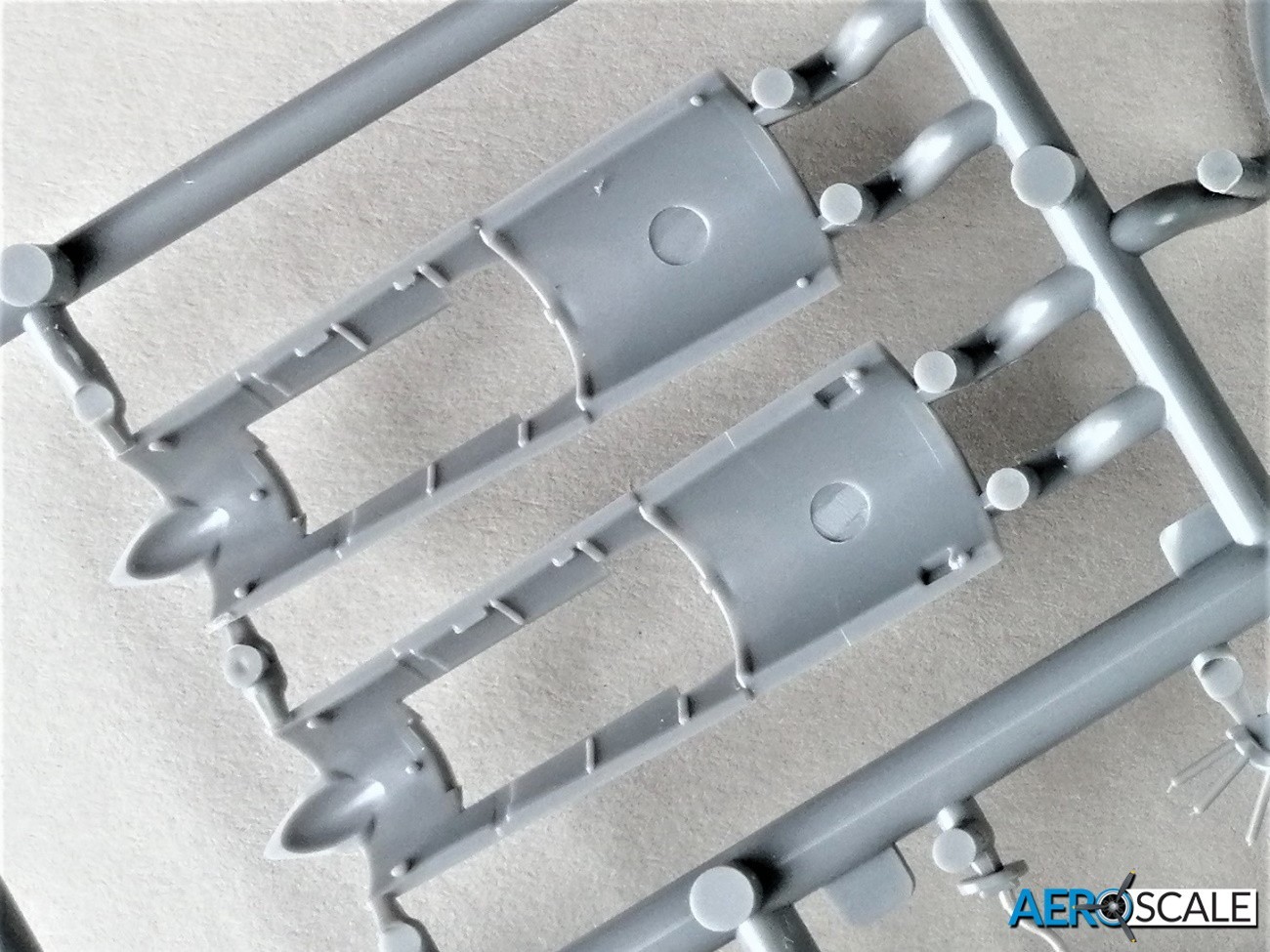 There are eleven detailed parts making up the cockpit. The raised and recessed detail on the instrument panel [IP] looks good, and a decal provides the detail for the instrument faces. There are a couple of other decals providing additional detail for the IP. The seat has a number of circles, representing weight saving cut outs. You may want to drill the seat out to represent the perforated look. Seat harnesses are provided as a decal. The attachment points on the plastic frame needs bending slightly. The detail on the sidewalls of the cockpit looks very good and will benefit from a light wash to further accentuate the detail. 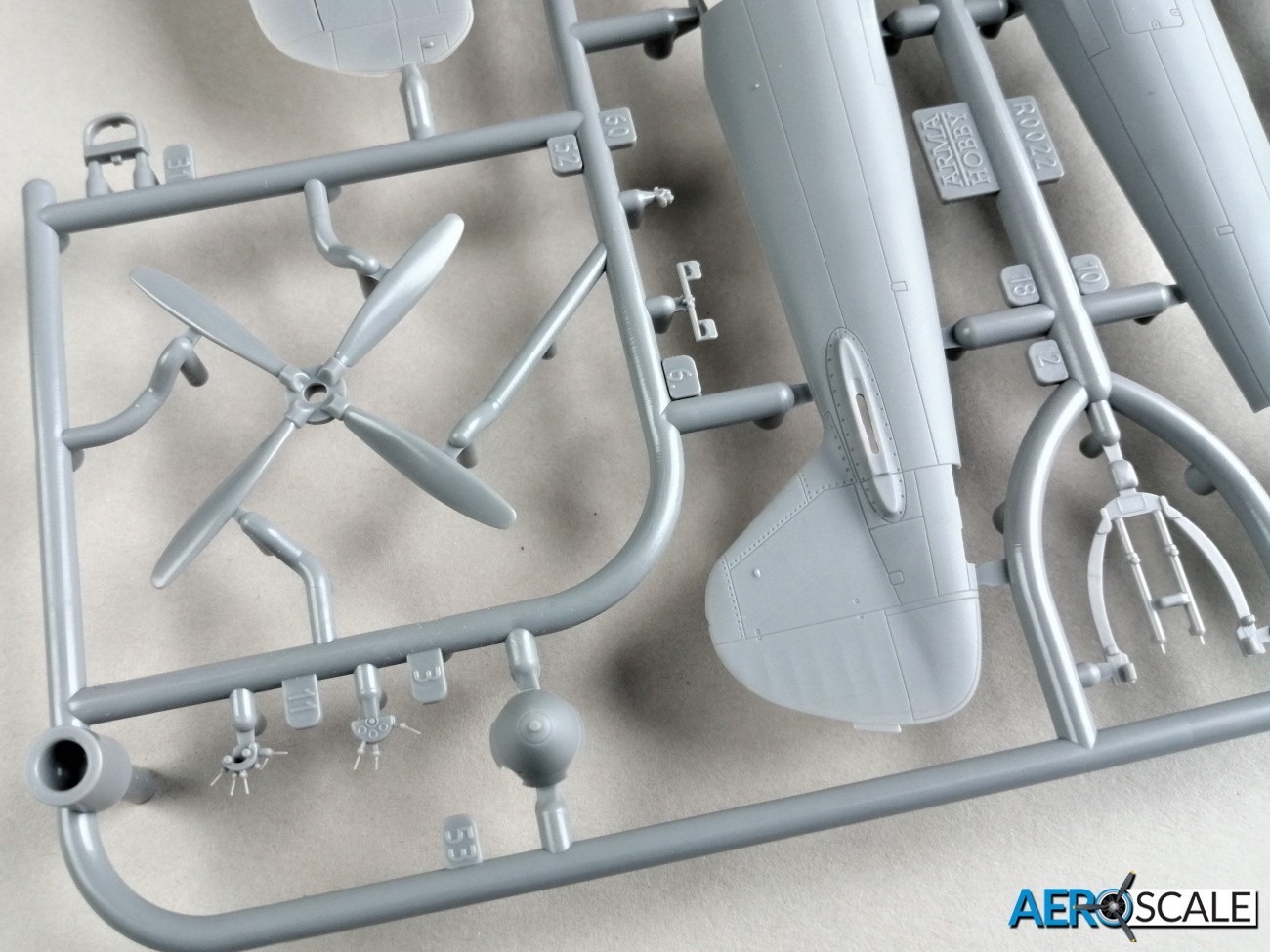 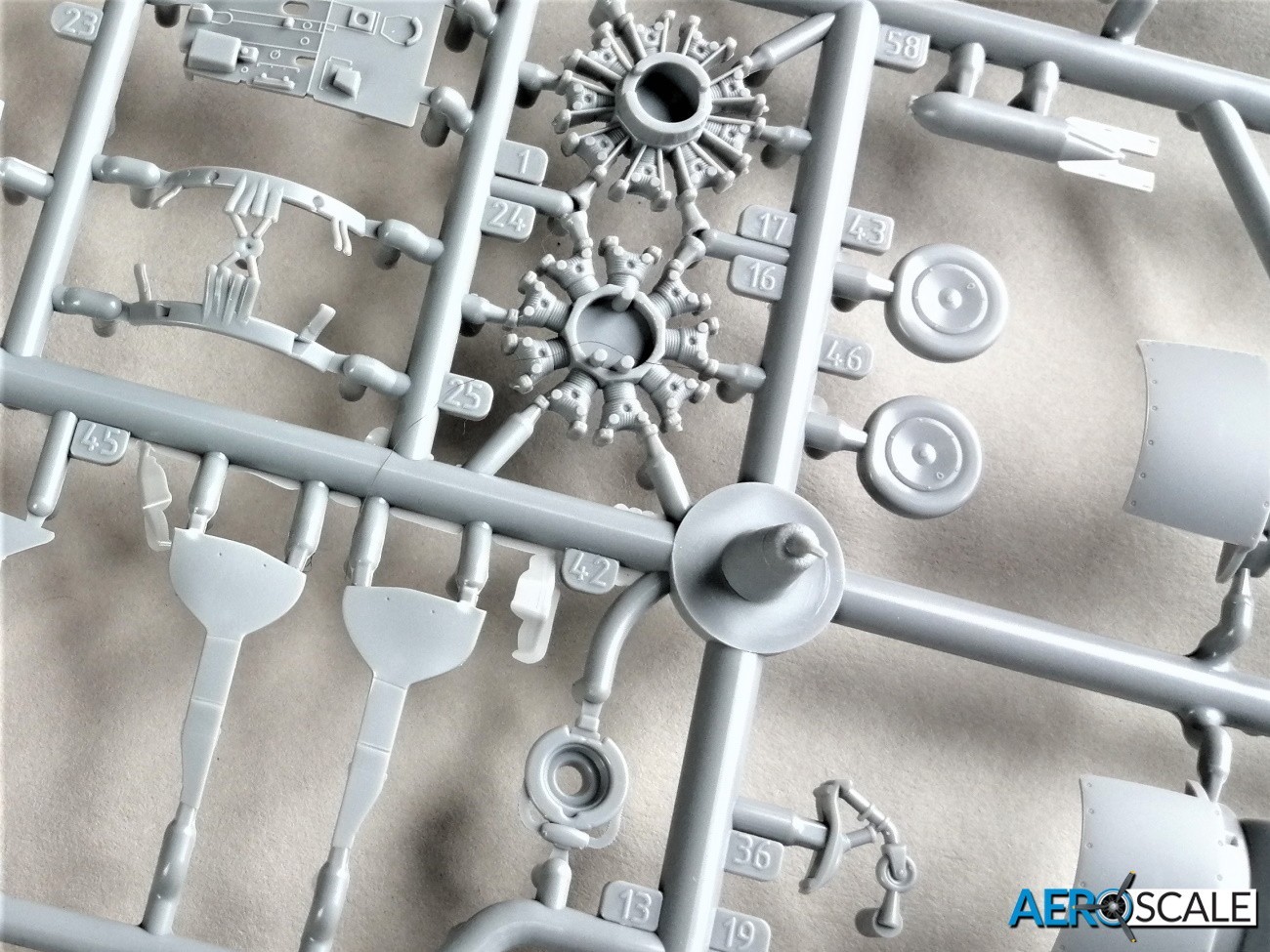 The canopy can be displayed open or closed. The three clear canopy parts are crystal clear. There are two alternate sections of the fuselage around the cockpit, onto which fits the canopy. One is for the closed canopy and the other is for open. 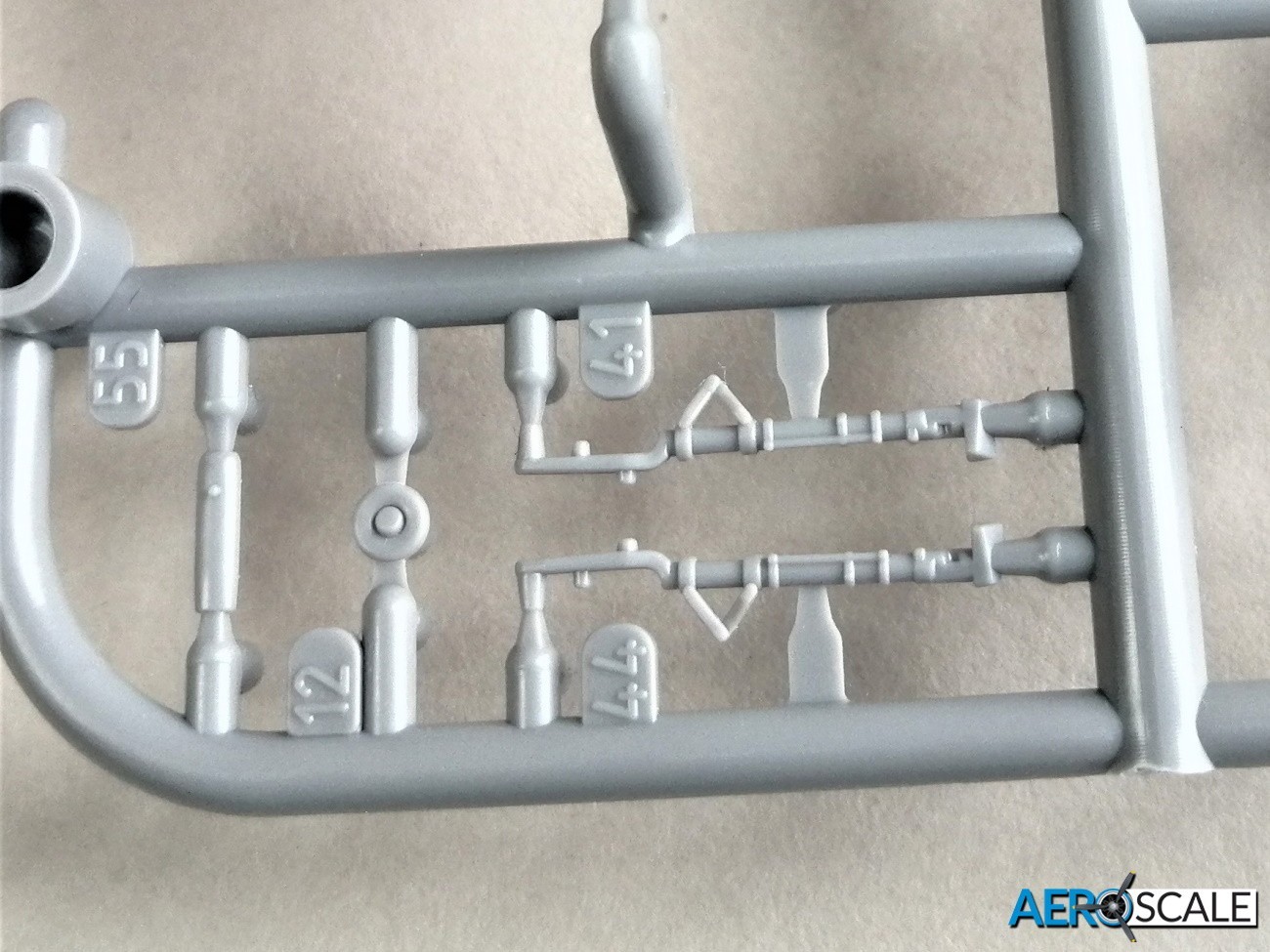 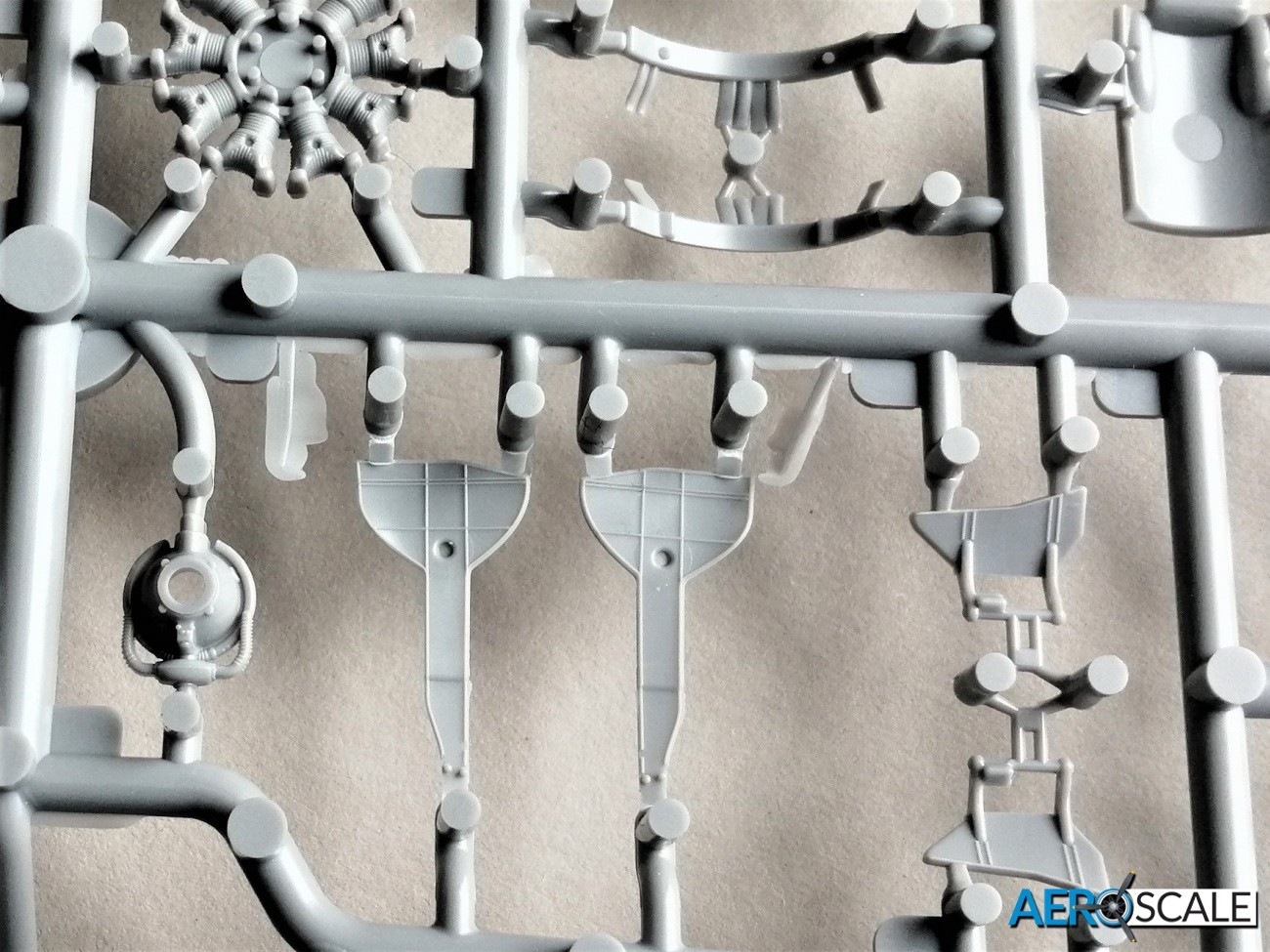 The two separate banks of cylinders and the separate push rods as well as the reduction gear housing will create an impressive looking Ha-45 Homare engine. I doubt you’ll see much of it as it’s a snug fit inside the fuselage. 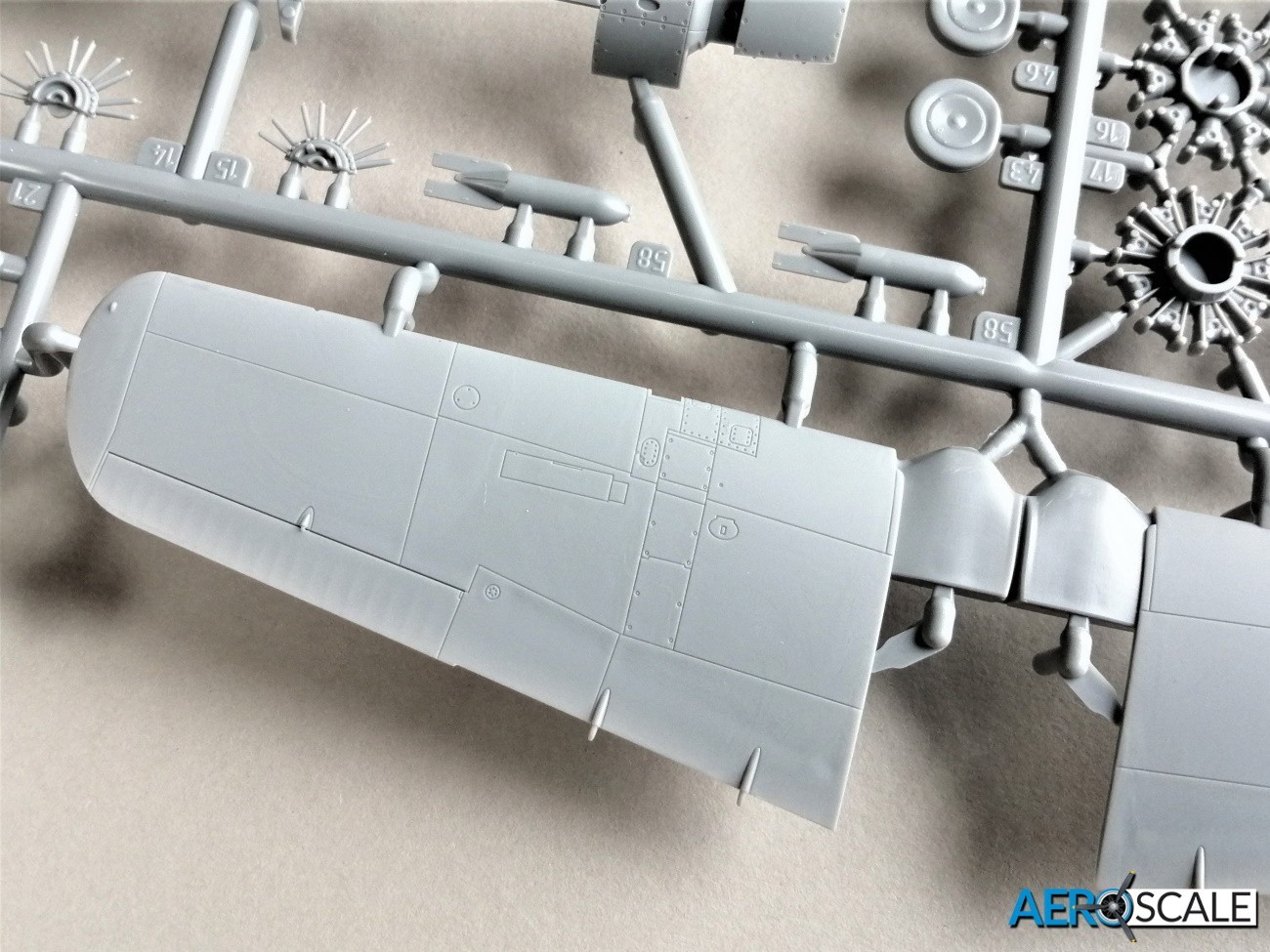 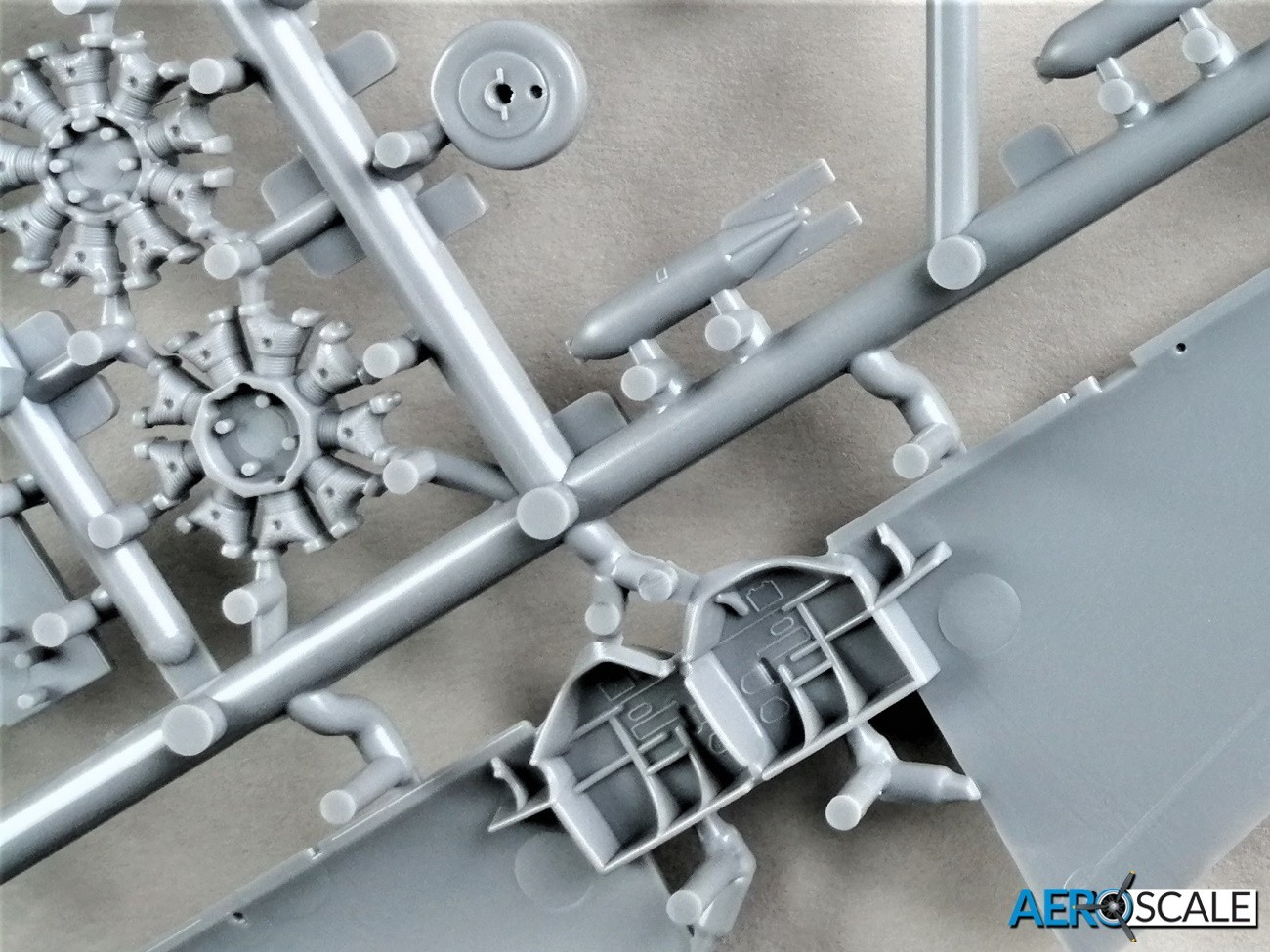 The fuselage halves are split tradionally with left and right halves. The hatches on the upper and lower part of the engine bay are separate as are the two radiator fairings. There are two different styles of fairing, so just make sure you fit the correct one applicable to the marking option. The cowl flaps are separate and moulded in the closed position. The exhaust pipes are attached to two semi annular piece of plastic making the fitting of such small fiddly pieces easy to do. The lip around the nose is separate and one piece. The four-blade propeller is one piece with a separate prop boss. At the other end the rudder is moulded in situ. 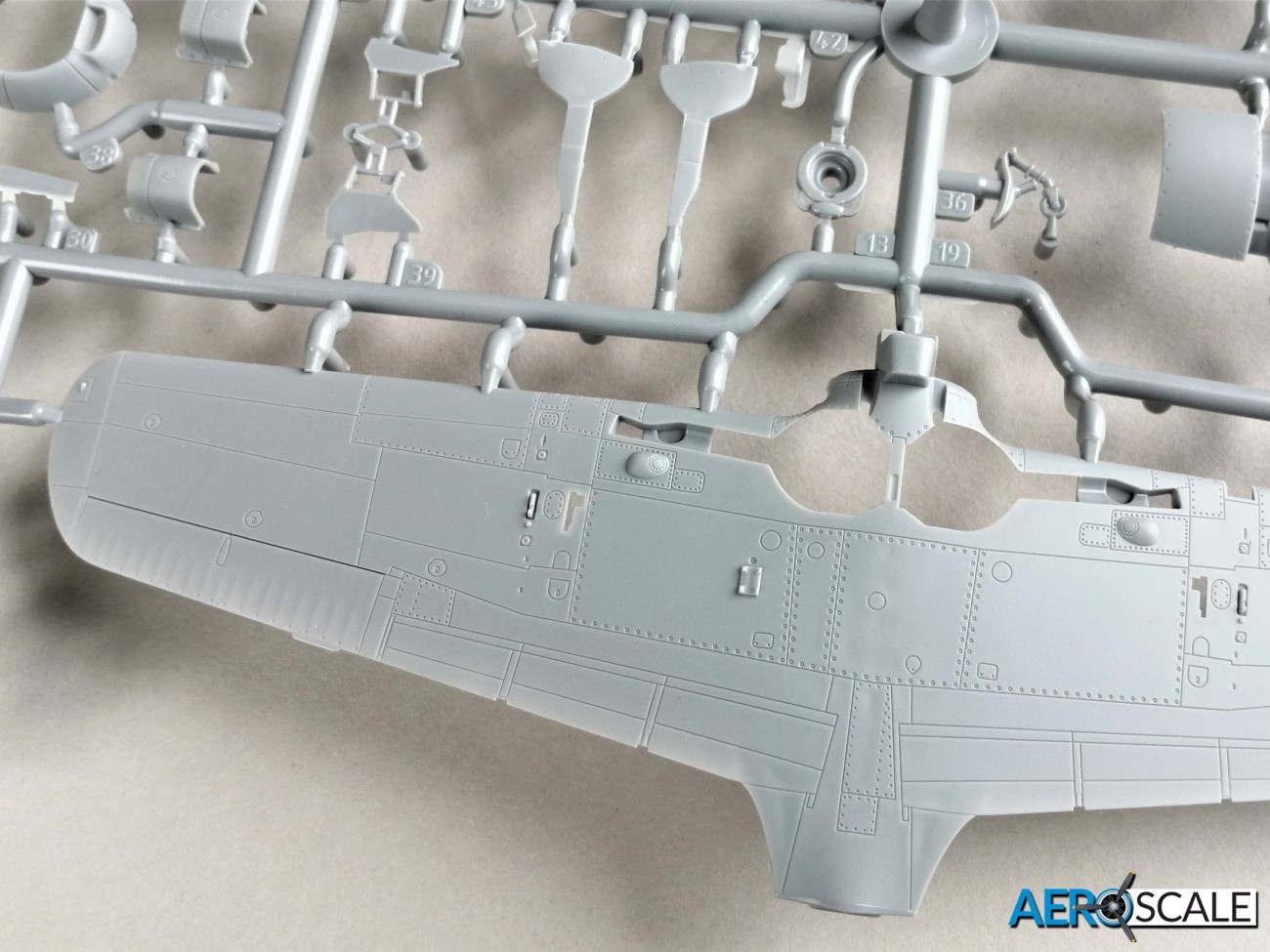 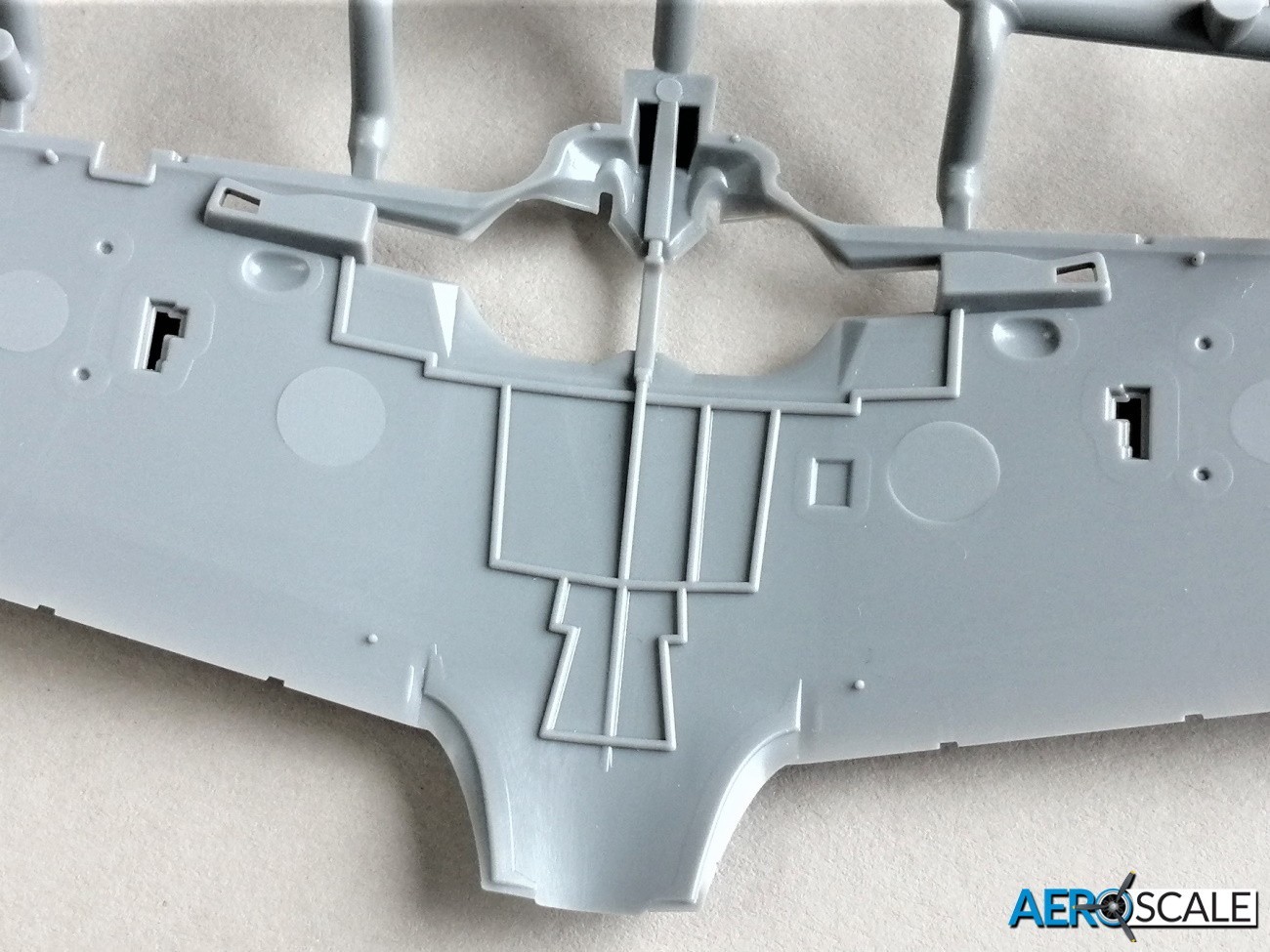 The wings are in two pieces with a one piece lower and unusually a one piece upper. The ailerons and flaps are moulded in situ. The walls of the undercarriage bay are moulded to the upper wing and there is some excellent detail in there. There are holes already in the wing to accept sway braces for carriage of the bombs or fuel tanks. There are a couple of gun barrels and a landing light cover to add. It’s great to see the canvas covered control surfaces represented accurately by Arma Hobby. No sagging canvas between the ribs, just rib tape on show. Both horizontal tailplanes are one piece with the elevators moulded on. 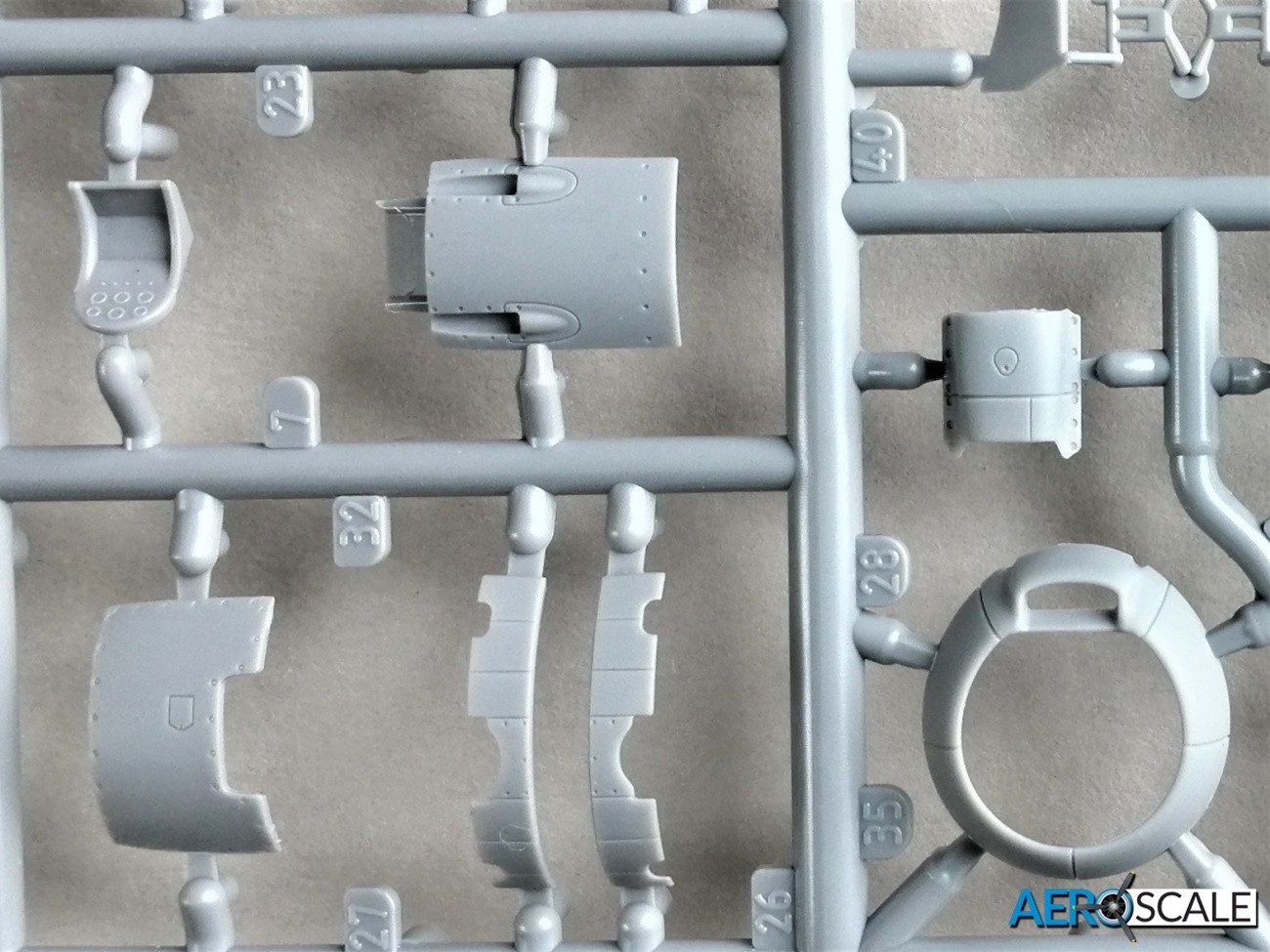 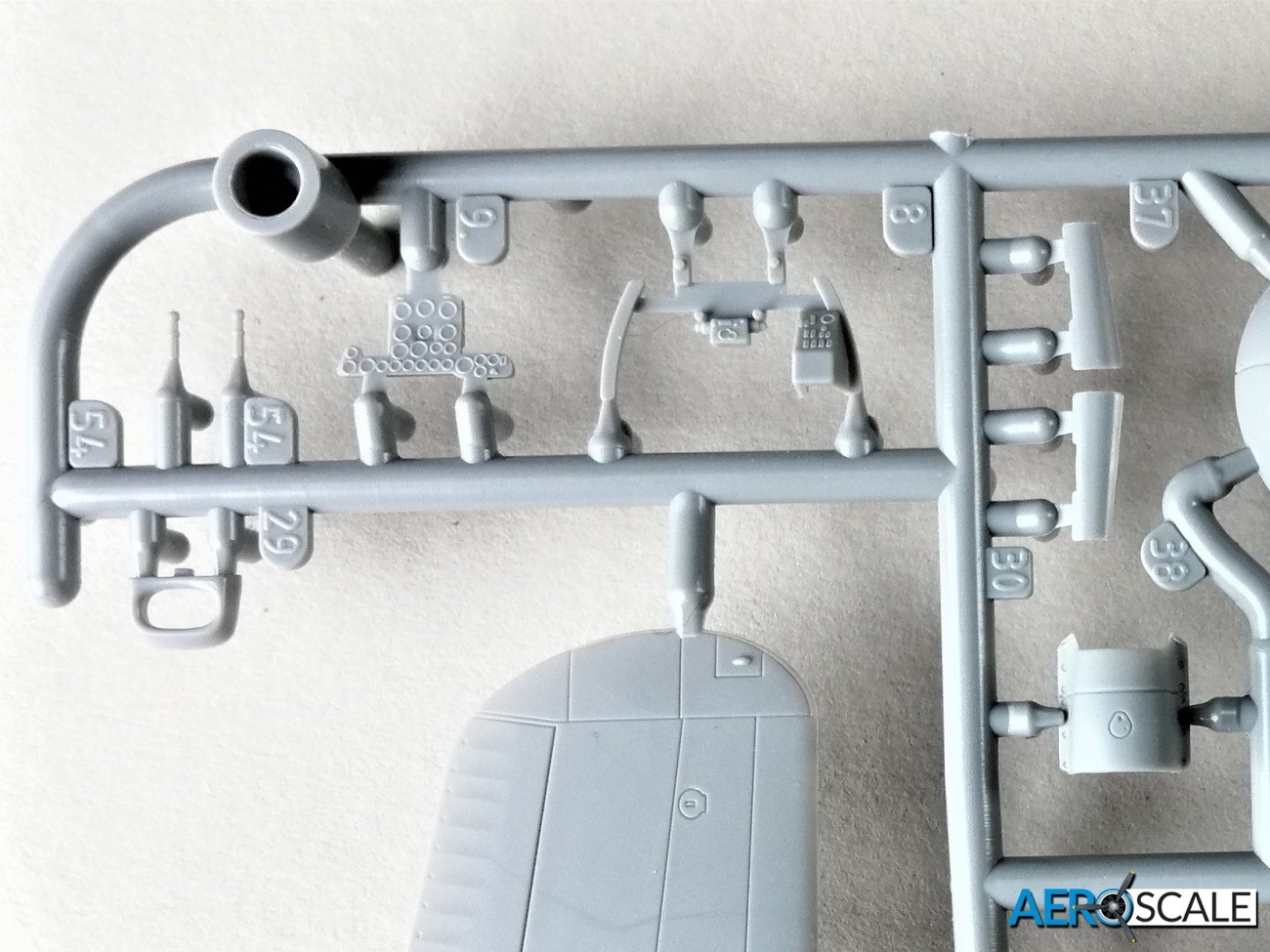 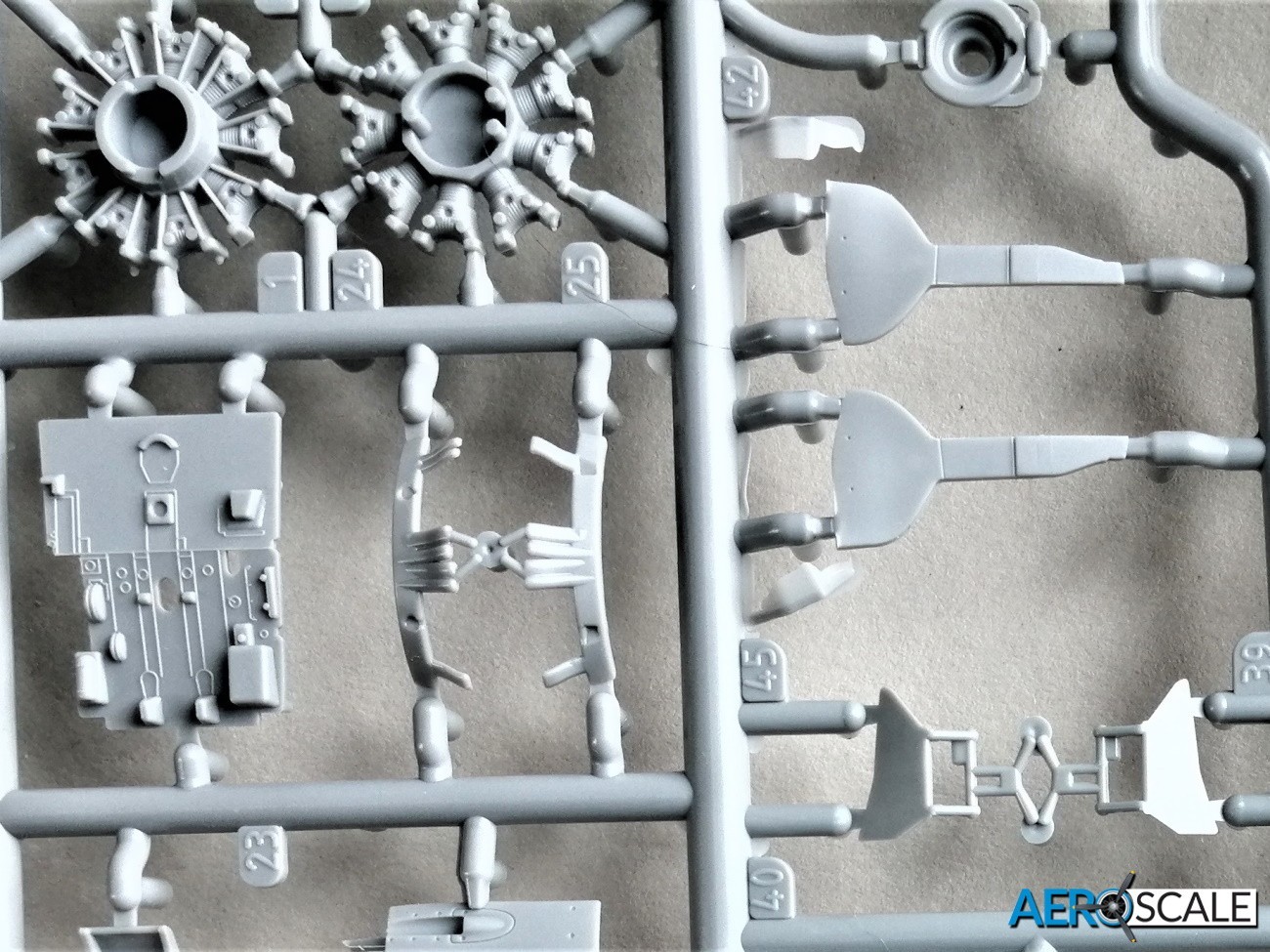 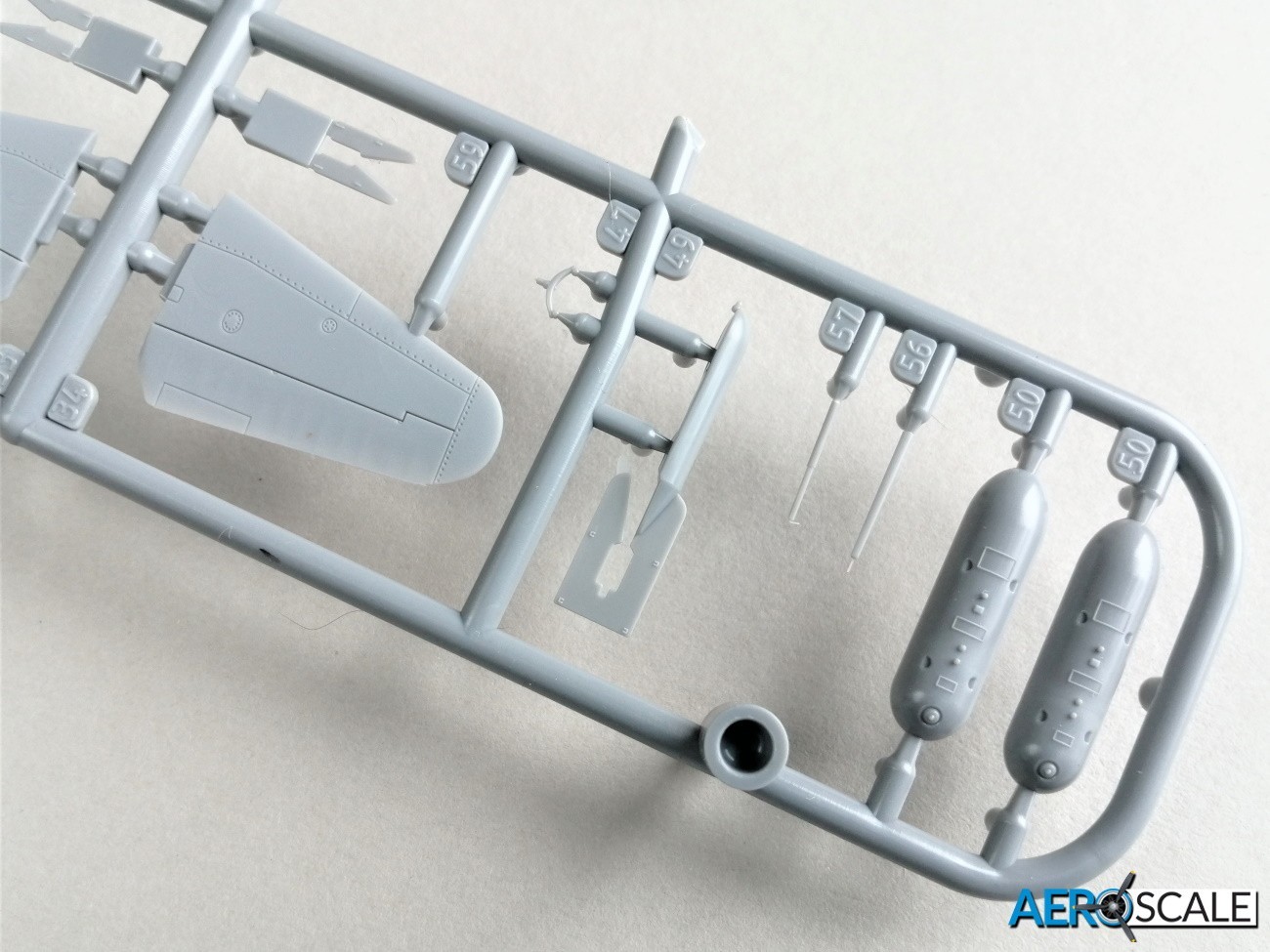 The kit includes a couple of wing fuel tanks and there are a pair of 100kg and a single 250kg bombs. The latter is slung under the left wing with a fuel tank on the right counter balancing the weight distribution. I like Arma Hobby’s novel approach to attaching the small fins to the 100kg bombs. A tab has two of the small fins attached. It’s simply slid into the rear of the bomb and when the glue is set, the tab is cut off. Shackles are included for the bombs and tanks. 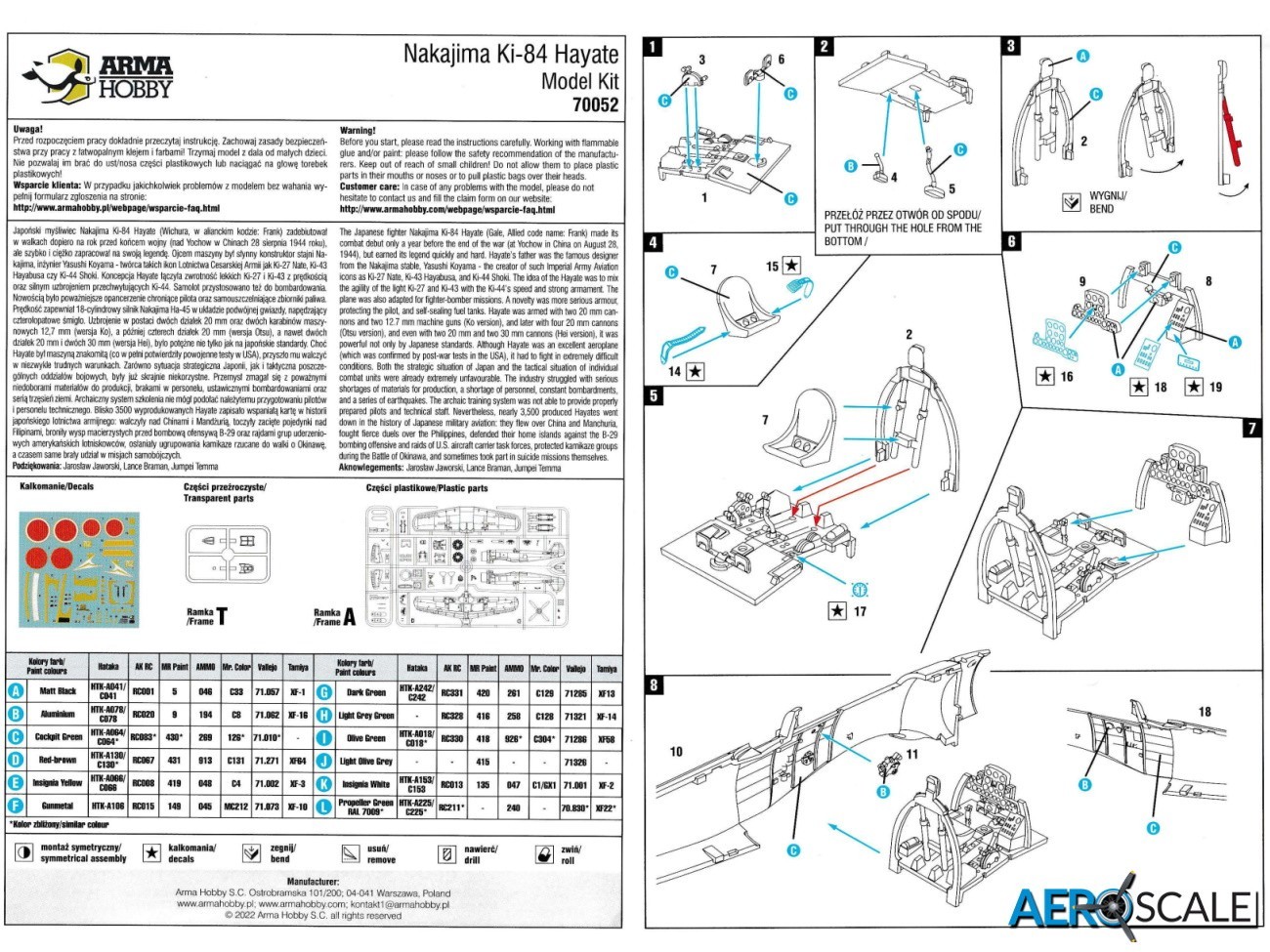 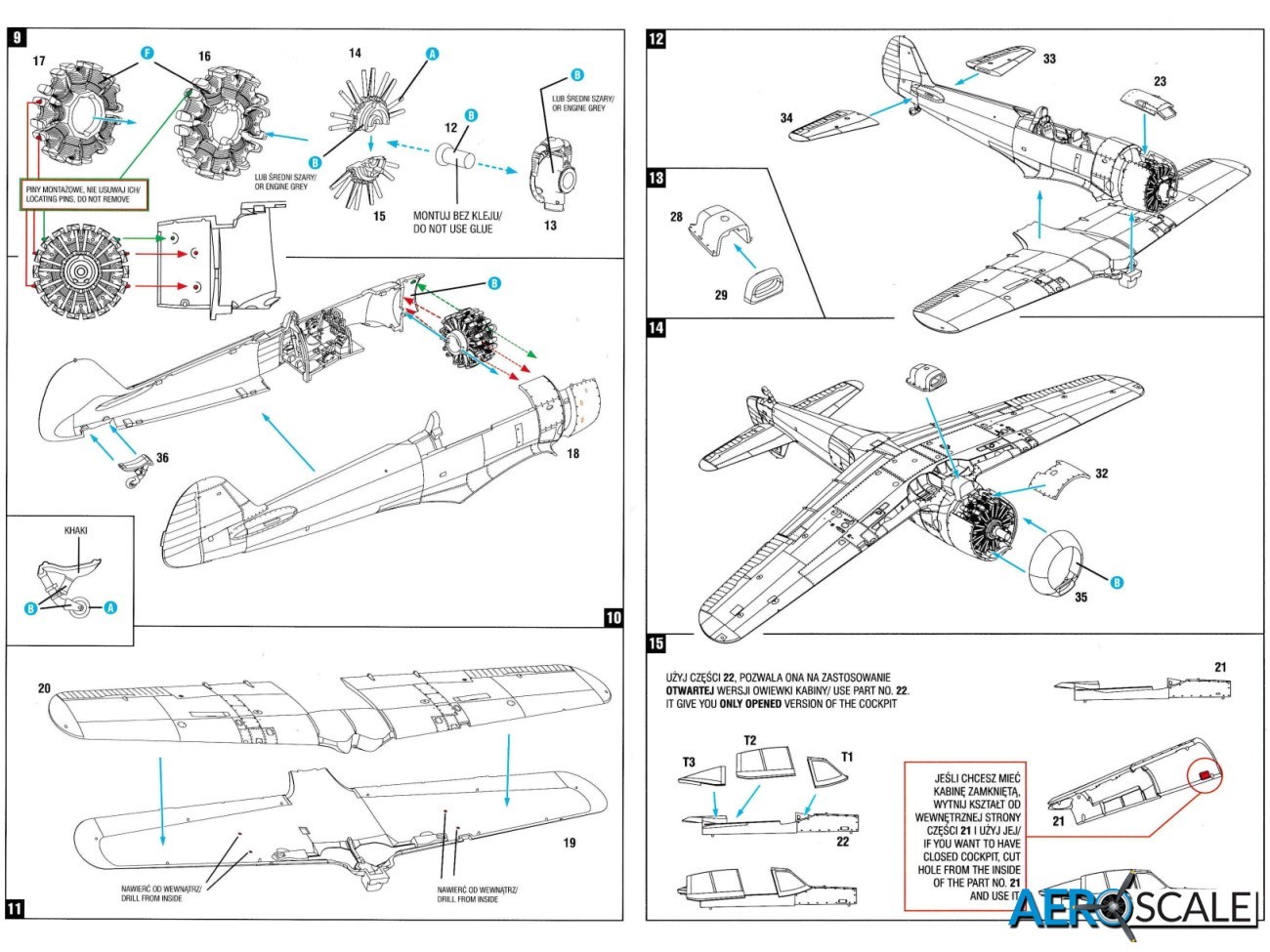 The decals printed by Techmod look superb: thin, glossy, with good colour density, the definition is superb and the carrier film is kept to a minimum. Included are all the various tail markings. Cockpit instruments and seat harnesses are provided. Unlike the Expert edition the decals feature only one set of stencils, cockpit instruments and harness. The Expert edition has enough additional decals for you to use on a set of overtrees.

There are two marking options:

These are a new set of marking and don’t feature in the first expert edition. Upper surfaces are olive green with light olive grey under surfaces. 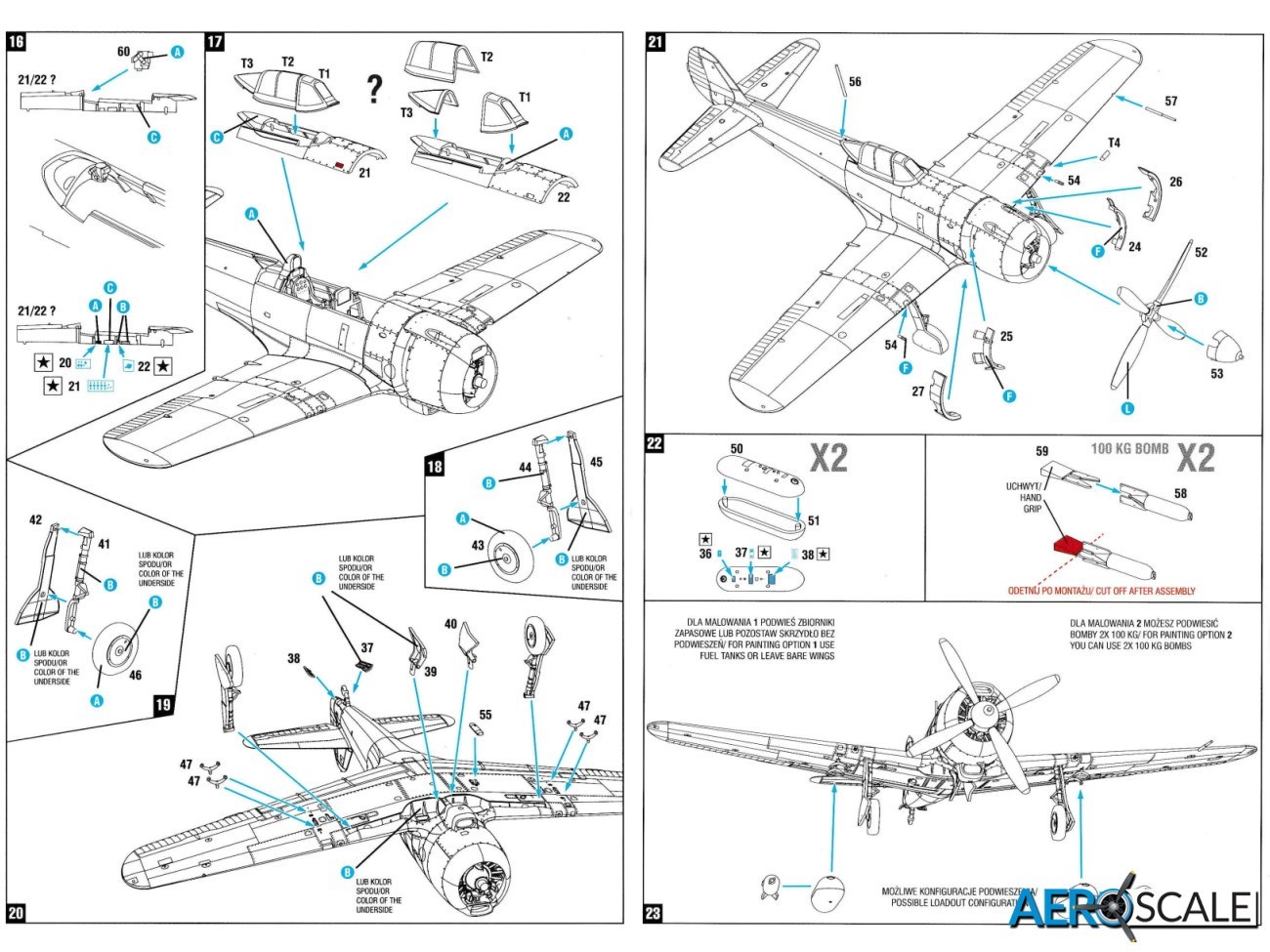 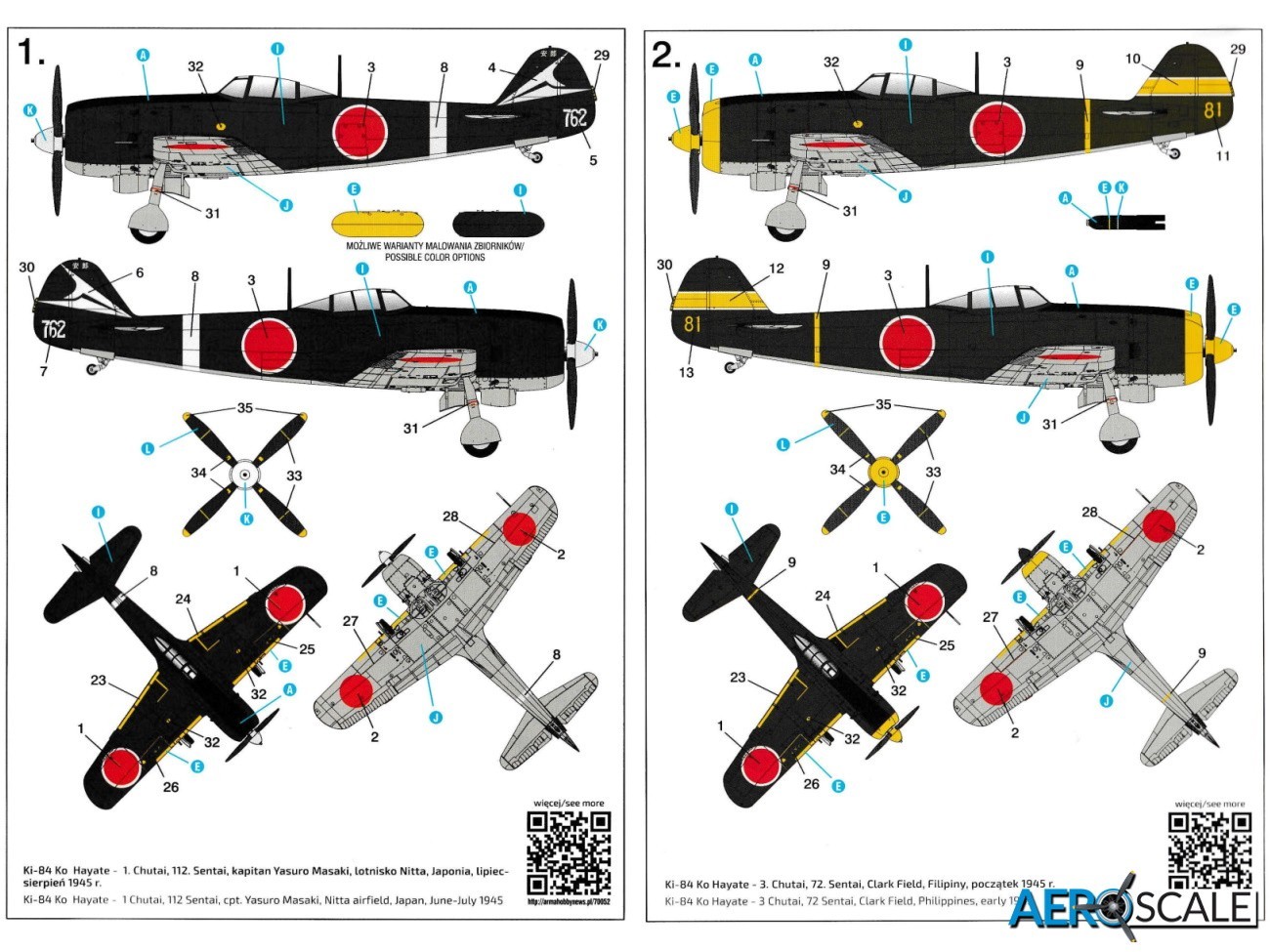 The instructions take the form of an A5 format eight-page booklet. Two of the pages feature the colour four view paint and decal guide.  The build process looks pretty straightforward to follow. There are quite an extensive range of paint manufactures as reference for the colours. They include Hataka, AK RC, Lifecolor, Ammo, Humbrol, Vallejo and Tamiya.

The Arma Hobby Model Kit Edition of the Nakajima Ki-84 Hayate is intended for folk on a budget or for folk that would rather not use PE contained in the Expert Edition. The quality of the detail on the plastic parts as you can see is superb. Instrument panel and other detail for the cockpit including seat belts are included on the decal sheet. A nice touch from Arma Hobby is selecting two new marking options with this Edition. They dont feature natural metal finishes, making life a little easier for less experienced modellers.

Many thanks to Arma Hobby for this review sample.