Jet Fighters of the U. S. Navy and Marine Corps Part 2: Mach 1 and Beyond

JPTRR
Editor
posted on 10 months ago — updated on 10 months ago
1,000
views
JET FIGHTERS OF THE U. S. NAVY AND MARINE CORPS PART 2: MACH 1 AND BEYOND is an information packed book for historians, modelers and enthusiasts of supersonic U.S. Navy jets, by DETAIL & SCALE. It covers USN supersonic fighters past and present, including the F-35B and F-35C. 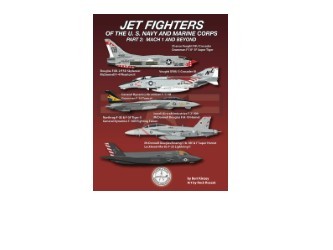 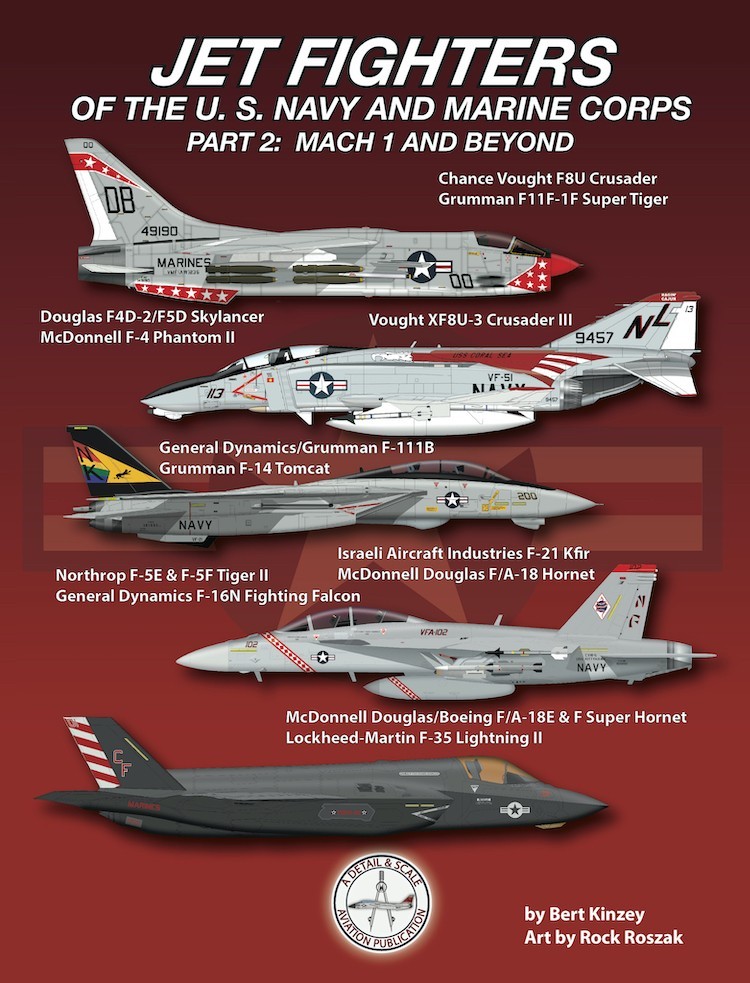 Jet Fighters of the U. S. Navy and Marine Corps Part 2: Mach 1 and Beyond

The several Detail and Scale books I have read are remarkably comprehensive.  Founders and authors Bert Kinzey and Rock Roszak bring some 60 years of first-hand military aviation expertise into their Detail and Scale brand.  Both authors are also modelers and although this is primarily a history of USN supersonic fighters, there is a wealth of information here for modelers.  Author Bert Kinzey has produced a thorough text and Rock Roszak, a retired career USAF aircrewman, illustrated the book.

But these are aircraft carrier jets and without a carrier, they would not exist.  D&S delves into the evolution and revolution of USN’s carriers, from modified World War Two Essex-class ships to the latest supercarriers.

D&S writes about this book:

Jet Fighters of the U. S. Navy and Marine Corps is a two-book series that describes the entire history of American Naval jet fighters, from the very beginning when many thought that the onset of military jets would mean the end of naval carrier-based aviation, to today when the fifth-generation stealth jet F-35B/C Lightning II has begun its service with both the Navy and Marine Corps. Both volumes cover every jet fighter that has ever been produced for the Navy and the Marine Corps, and not only those that were used operationally, but even the aircraft that only made it to the flying prototype stage are included. Also covered by the books is the history of how American aircraft carriers evolved from the ESSEX class ships that won World War II with propeller-driven aircraft to the mighty supercarriers of today.

In the first book, Jet Fighters of the U. S. Navy and Marine Corps, Part 1: The First Ten Years, author Bert Kinzey described the first and second-generation jet fighters that came on the scene at the end of or shortly after World War II. These jet fighters made their first flights between 1945 and 1954, and the book covers fifteen aircraft arranged according to the chronological order of the date of their first flight.

This concluding volume, Jet Fighters of the U. S. Navy and Marine Corps, Part 2: Mach 1 and Beyond, resumes where Part 1 left off and continues to the present day. The evolution of the United States Navy’s aircraft carriers is again picked up and covers continued modifications to the ESSEX and MIDWAY class carriers and to the initial supercarriers of the FORRESTAL class. The follow-on supercarriers of the KITTY HAWK, NIMITZ, and FORD classes are discussed to highlight the continued evolution required to handle the ever-increasingly sophisticated jet aircraft that have achieved operational status. 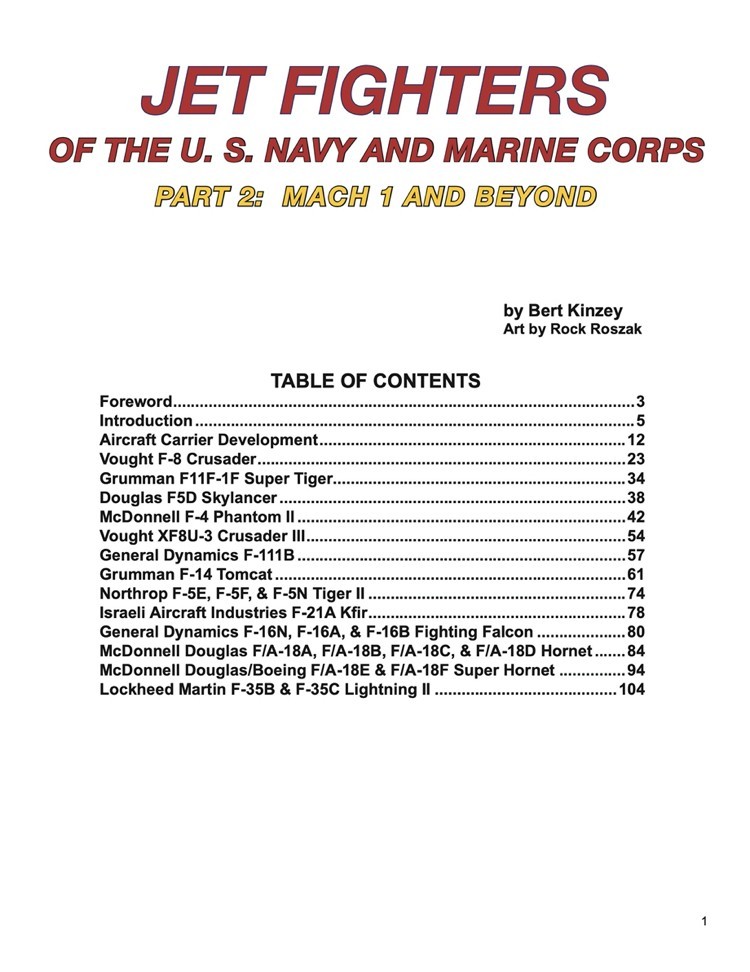 An aviation axiom is ‘an airframe is only as good as, and never better than, the engine that powers it.’  Some of the jets covered in Part 1: The First Ten Years were good designs but suffered from propulsion systems that just weren’t capable enough given the adolescence of jet engine technology of the time.   This book demonstrates how the maturing of engine technology offered some designs to achieve original performance desires.  Indeed, this book documents how, after re-engining, one of the under-performing jets examined in the first book became the first USN Mach 2 jet (only 13-months after the purpose-built Mach 2 F-104 did so).  Such history as that fills this book to make it far more valuable than just a “gee-whiz” treatise on cool Navy jets.

After a forward the book launches into seven pages spanning development of second-generation navy jet fighters. From the first wheezing naval jets – some of which were otherwise very advanced – through the mighty F-8 Crusader which put Naval Aviation (NAVAIR) on par with, and even superior to land-based fighters, through the super jets of today.  Essential to the increasing ability of USN’s new jets, Aircraft Carrier Development offers 11 pages of detailed descriptions and histories, with at least one photograph per class.  Covered are modification programs, and strengths and weaknesses of each class, and even decommissioning dates.  The ability of a class to operate certain aircraft is examined, too.  Unique characteristics of certain ships are presented, i.e., USS Franklin D. Roosevelt upgrades relative to her two sister ships.  Upgrade programs (SCB-27A, SCB-144, etc.) are covered, the scope including changes to catapults and elevators.  I appreciate that the author mentions that ships in a class may have differing details from their sister ships, even the carriers of today.   This chapter is particularly interesting to me as it contains information I have never heard of, e.g., A-4 Skyhawks deployed on certain specialty carriers as fighter-interceptors.

Next begins what you bought the book for – aircraft.  Eighty-Nine Pages Covering:

Each aircraft is examined and presented in detail, like the chapter about the carriers.  Important dates are included, as are modifications and upgrades, versions and variants, decisions to produce or cancel, units that flew the aircraft, weapon outfitting, and combat records, e.g., four pages of the F-4 Phantom II present design developments and records achieved.  Development histories are interesting, especially the saga of today’s F-35 family of aircraft.  Fascinating performance data is covered, like the top speed of the Crusader III being higher than the next-generation F-15.  A dizzying yet useful number of acronyms and abbreviations of engines, weapon systems, radars, etc., are included.  For those jets that existed during the contemptible Robert McNamara era, changes in designations are explained.

Further enriching the content are design failures and curiosities, such as mounting Sidewinder missiles in a fairing along a jet’s spine, to launch the rocket directly over the cockpit canopy!  (Aeronautical engineers, gotta love ‘em.)   Interesting development programs are noted.  One instance demonstrating challenges in aircraft design was the attempt to bring an aircraft within weight specifications that resulted in three programs for the aircraft - WIP (Weight Improvement Program), SWIP (Super Weight Improvement Program) and CWIP (Colossal Weight Improvement Program).  Design failures are noted including one that lead to a Deputy Chief of Naval Operations for Air Warfare telling a Congressional investigation, “Mister Chairman, there is not enough thrust in all Christendom to make a Navy fighter out of that airplane.”

A strength of D&S is the vast gallery of images in synergy with the text.  The book brims with photos.  It does not have as much artwork as other D&S books I have seen, perhaps because the recency of the subject matter provides the reader with a bounty of current visual resources.

Most aircraft chapters include images of the cockpit (esp. the F-18) and engine.  One really cool photo shows 30 years of NAVAIR development, a F-111B next to a FF-1 biplane fighter.  With most of the photos of aircraft being modern color images, modelers and artists can accurately discern camouflage and marking colors of aircraft, especially jets in the aggressor role, and specialty jets like the “Black Bunnies” of VX-4/VX-9.  They also afford the same scrutiny of aircraft carrier decks and jet engine components. 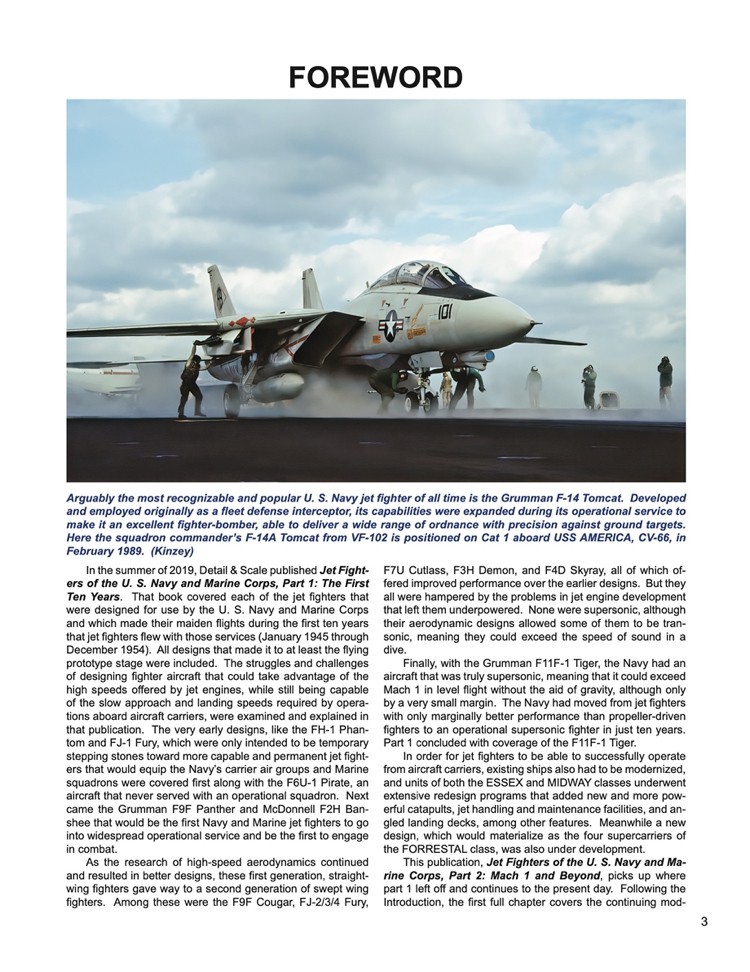 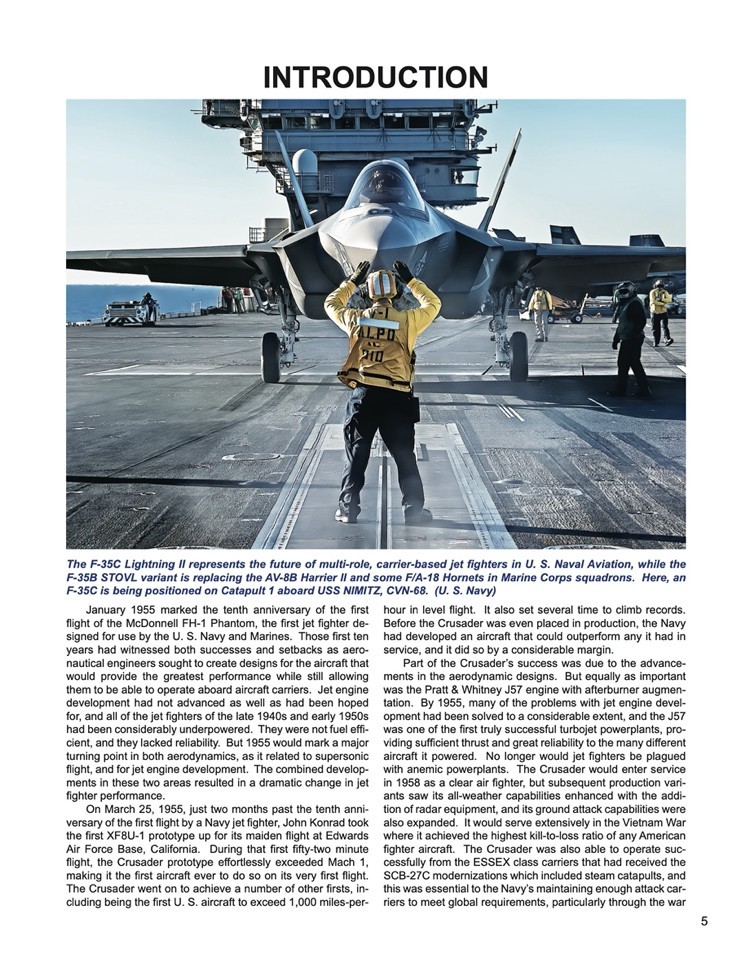 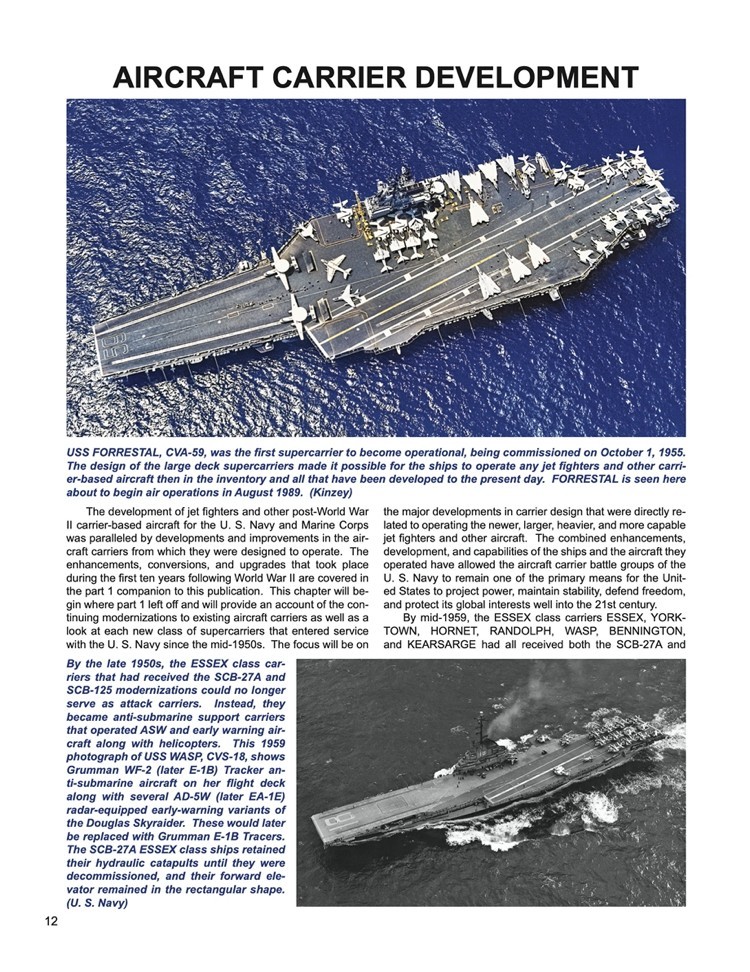 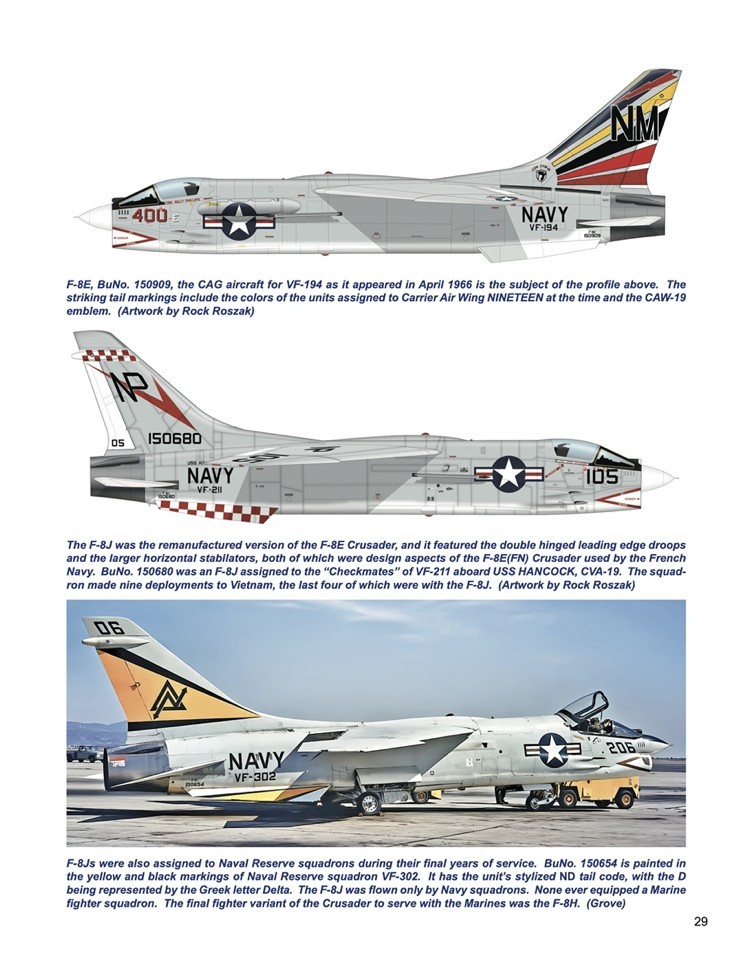 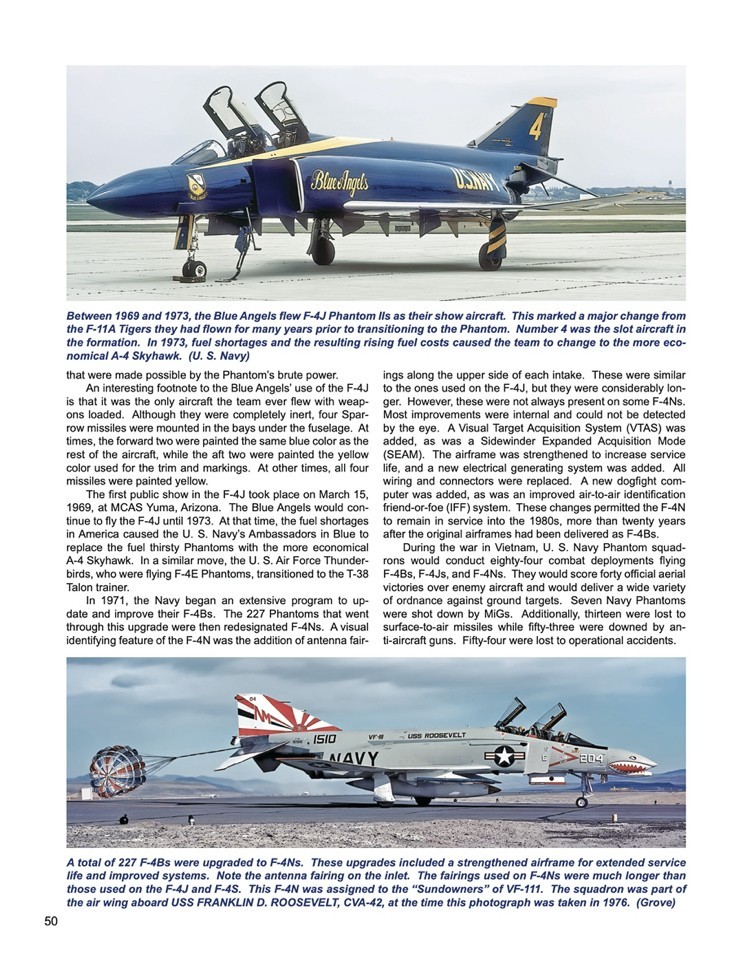 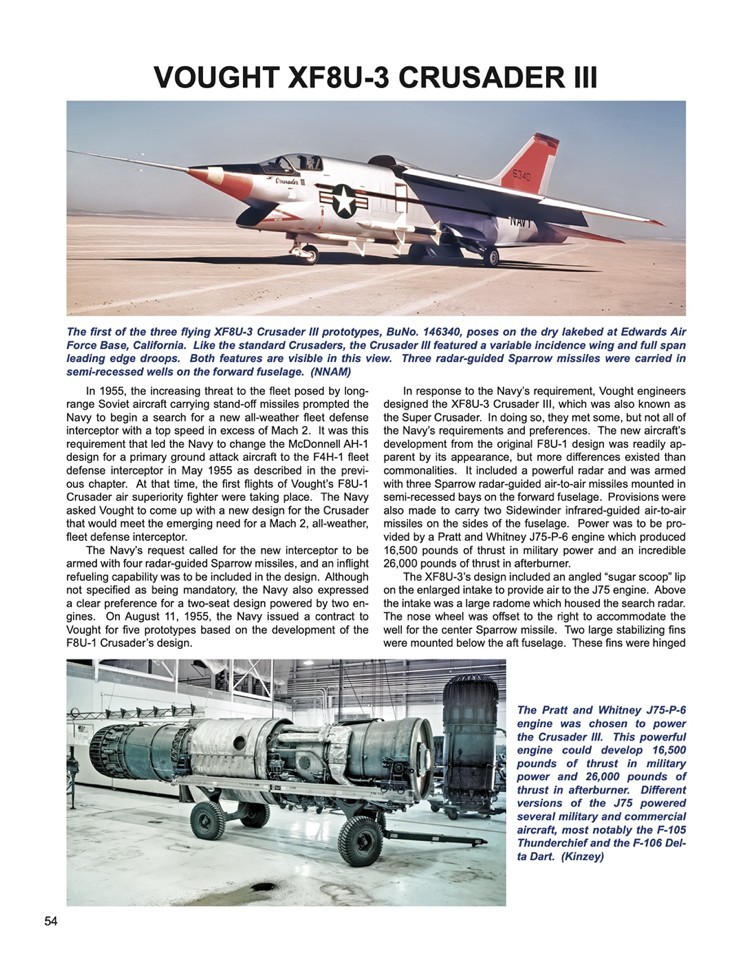 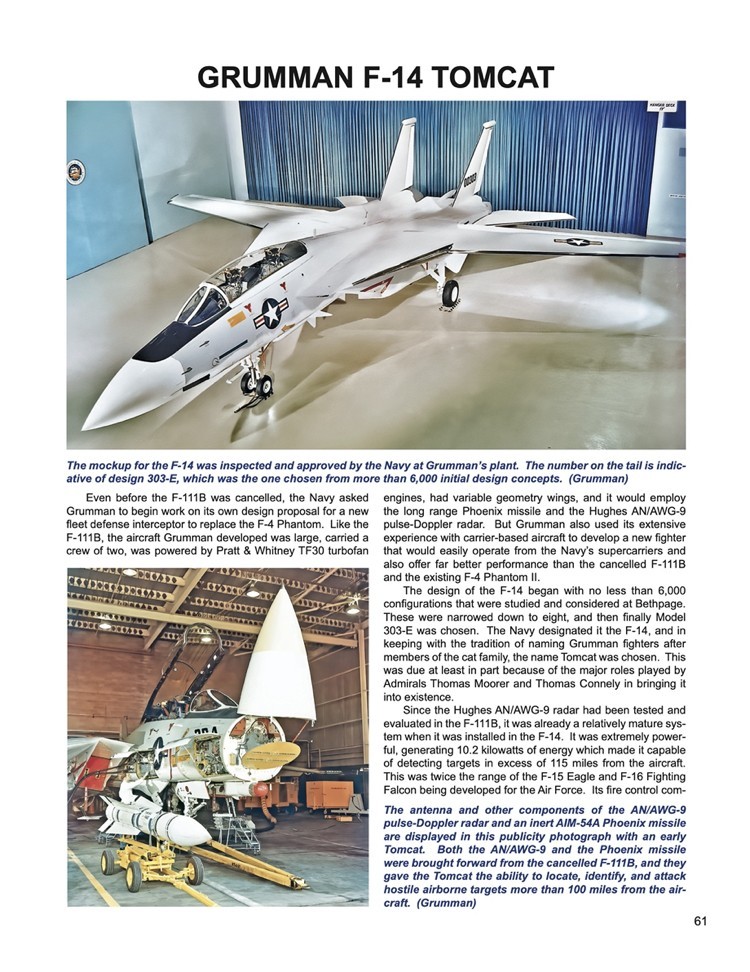 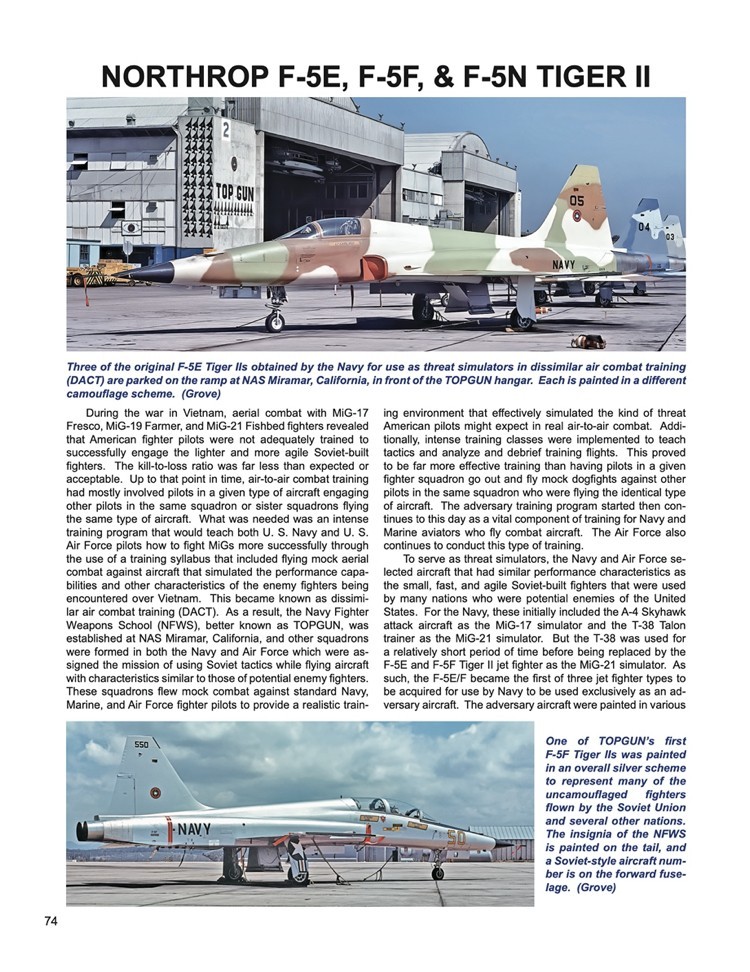 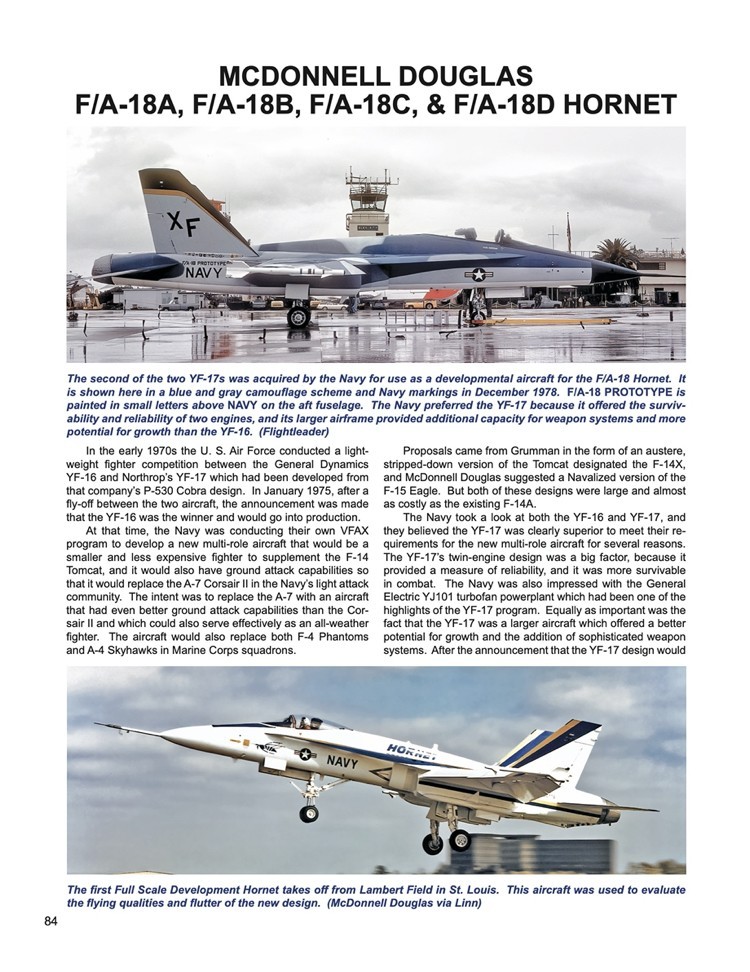 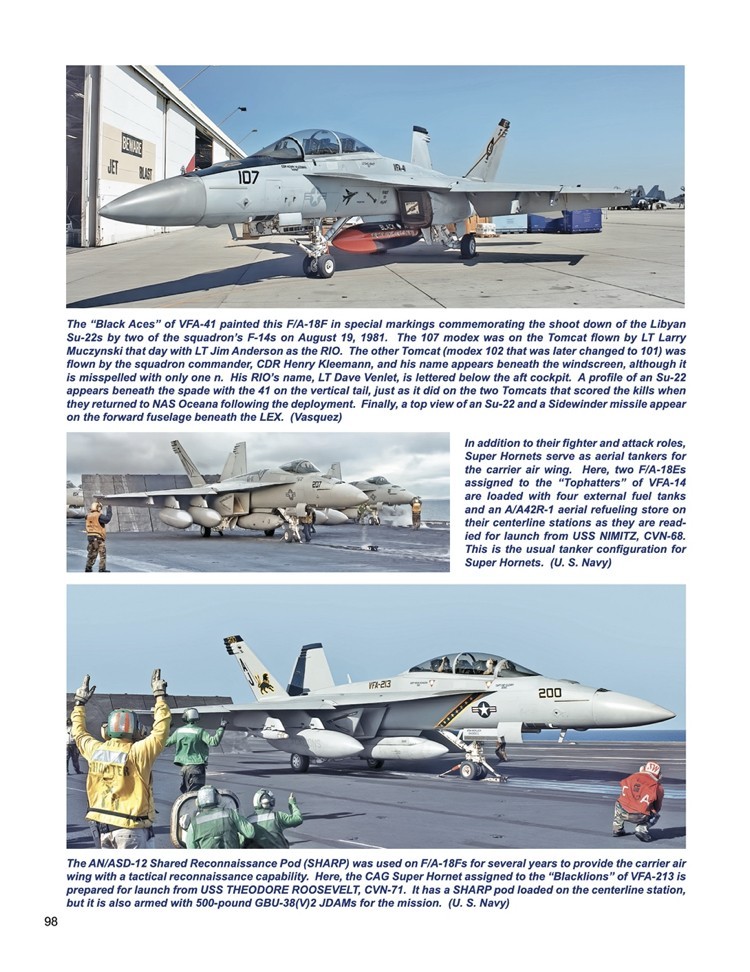 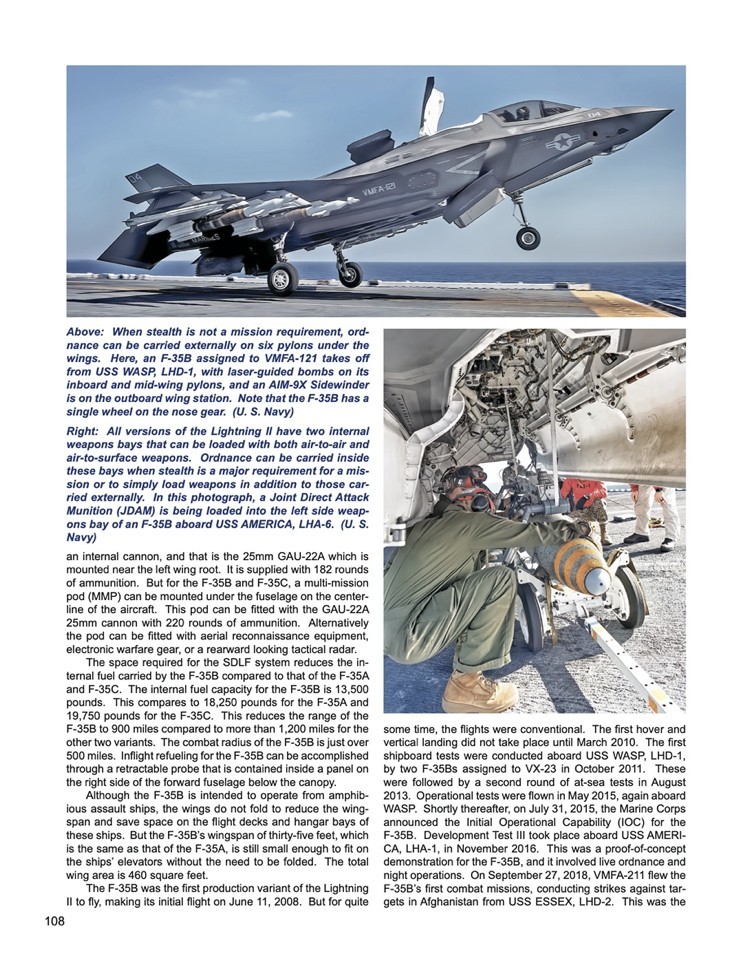 Jet Fighters of the U. S. Navy and Marine Corps Part 2: Mach 1 and Beyond is another great deal of textual and visual source material for modelers, artists, and historians.  Detail and Scale presents a concise yet detailed history of USN supersonic jet fighters spanning from the history books through today’s headlines.  The historical text by erudite military aviation professionals and scale modelers is exceptional, as is the supporting gallery of photos and artwork.   The fact that most of the images are color knocks it up several notches.

Modelers and historians of this fascinating evolution of early supersonic naval jets through today’s headliners, their impact on the Cold War and wars against rogue states and terrorists, should be enthusiastic for this book.  I have no complaints and happily recommend it.