Colors & Markings of the F9F Cougar in U. S. Navy & Marine Corps Service

JPTRR
Editor
posted on 1 year ago — updated on 4 months ago
1,788
views
Colors & Markings of the F9F Cougar in U. S. Navy & Marine Corps Service is an information packed book for modelers and enthusiasts of the early U.S. Navy jet, by Detail & Scale. It is volume 1 in their Colors & Markings Series. 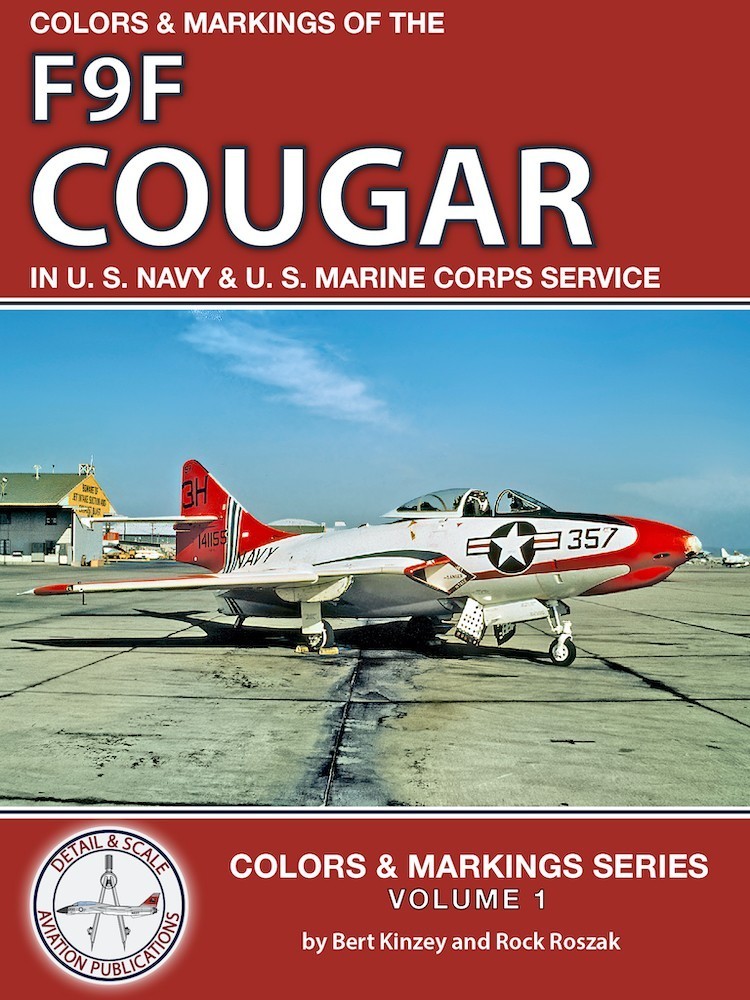 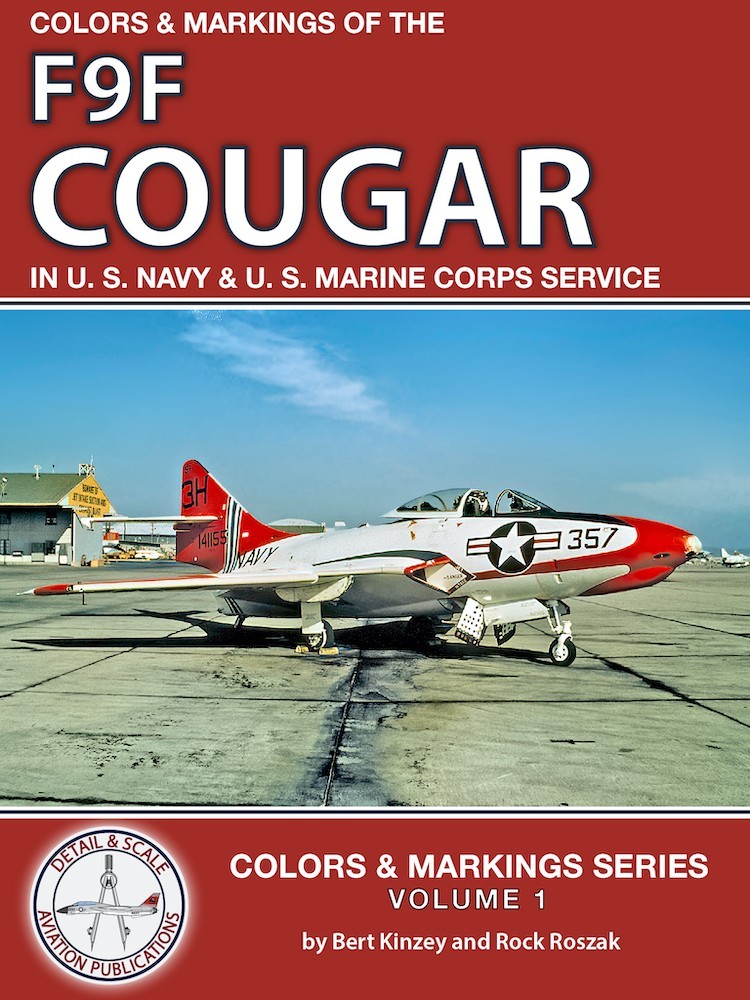 Colors & Markings of the F9F Cougar in U. S. Navy & Marine Corps Service is an information packed book for modelers and enthusiasts of the early U.S. Navy jet, by Detail & Scale.  It is volume 1 of their Colors &Markings Series.

Detail & Scale has chronicled the history of the Cougar in detail in their F9F Cougar in Detail & Scale—Revised Edition. They now complement that publication with Colors &Markings of the F9F Cougar in U. S. Navy and Marine Corps Service, a comprehensive look at the paint schemes used on this iconic Navy fighter and the squadrons that flew it.

Detail and Scale books are excellent sources for modeling and history.   They impressed me then and yet only recently have I comprehended just how comprehensive they are. Founders and authors Bert Kinzey and Rock Roszak bring over 60 years of first-hand military aviation expertise into their Detail and Scale brand. Roszak, a USAF navigator who retired as a colonel, creates illustrations for the books.   Both of the Detail and Scale creators are modelers, too. 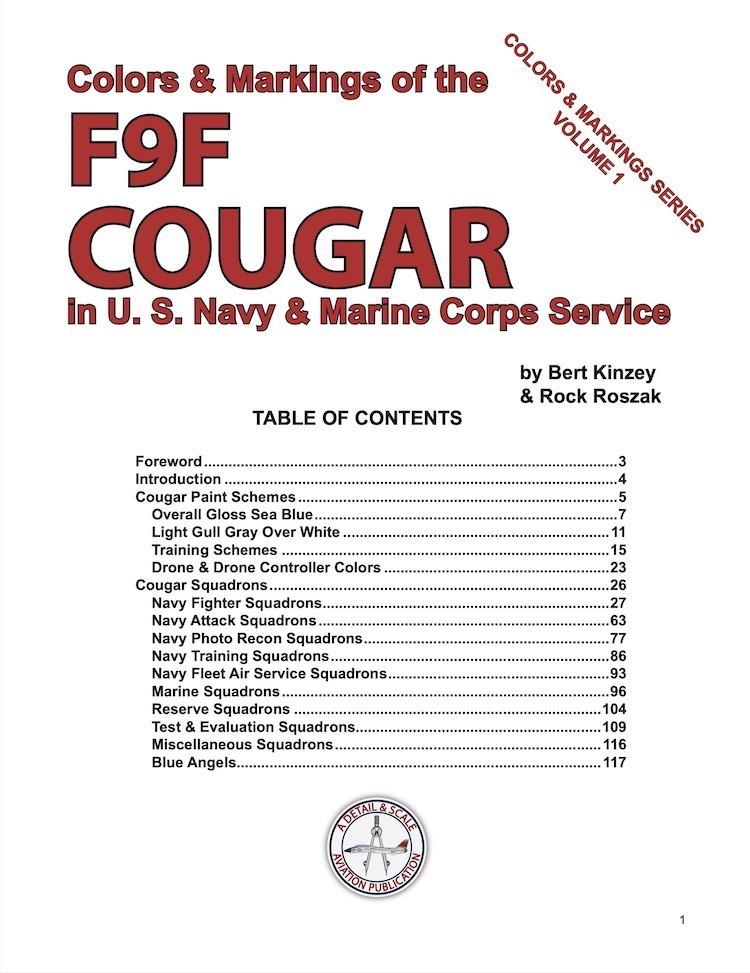 Colors & Markings of the F9F Cougar in U. S. Navy& Marine Corps Service subjects are:

Forward is an interesting page that tells the lineage of this book; from its first publication in 1984 the material has burgeoned to the point that it was deemed too big even for the digital format, and divided into the two books aforementioned.  Introduction discusses the book in relation to other D&S books, basic Cougar history, and the general overview of this content.  It explains how sweeping the wings of the F9F Panther did not result in a new aircraft type,just a new aircraft name: F9F Cougar.  It also notes the dumbing down of USN nomenclature in 1962 (because SecDef McNamara and his “Whiz Kids” couldn’t understand it).

Twenty-one pages present the previously listed Cougar Paint Schemes: Overall Gloss Sea Blue; Light Gull Gray Over White; Training Schemes; Drone & Drone Controller Colors.  It includes excellent information about the interior colors used for primer and corrosion control.  That subject is often contentious amongst modelers but the facts come straight from first-hand knowledge - one of D&S’ sources was a Navy aircraft mechanic.  Each sub-chapter gives a background and explanation of the subject color schemes, and lavishly illustrates the subject with well captioned photographs.  We learn about those silver leading edges of USN aircraft, when colors were gloss or flat, size of warning symbols, and unique walkways applied to some aircraft.  We are also introduced by name to military directives dictating paint schemes. For later reference a table lists the colors used on Cougars, by color name and Federal Standard (FS) number.

The93-page bulk of this book is eye-candy: Cougar Squadrons.  Each squadron type (Fighter, Attack, etc.) receives a basic history of the mission and other aircraft types in their community.  Herein we learn about each unit that flew Cougars, including the squadron nickname (some of which are headscratchers).  With a few exceptions, each unit has at least a page dedicated to it and its deployments, illustrated with at least one photograph and original artwork of an aircraft, and the armorial ensign (squadron insignia).  With 32 Navy squadrons flying Cougars on active duty, you can look forward to scores of fascinating images.

Units are presented with remarks about tail codes and Modex number series per deployment; aircraft used before and after the Cougar are often listed.  For simplicity I include what artwork enhances each squadron history.

VF-192 “Golden Dragons”: features their armorial ensign with aircraft to be shown in the Navy Attack Squadron Section

VA-214 “Volunteers”: armorial ensign but no photos nor aircraft profile

Interestingly, none of the following have armorial ensigns.

A brief description of FASRON units.

A brief description of the Reserve Squadrons that flew the Cougar.

The facilities Cougars were assigned to for special purposes.  There were three test and evaluation units, VX-2, VX-3, and VX-5.

NACA/NASA Cougars, and those in roles that don’t fit in above. 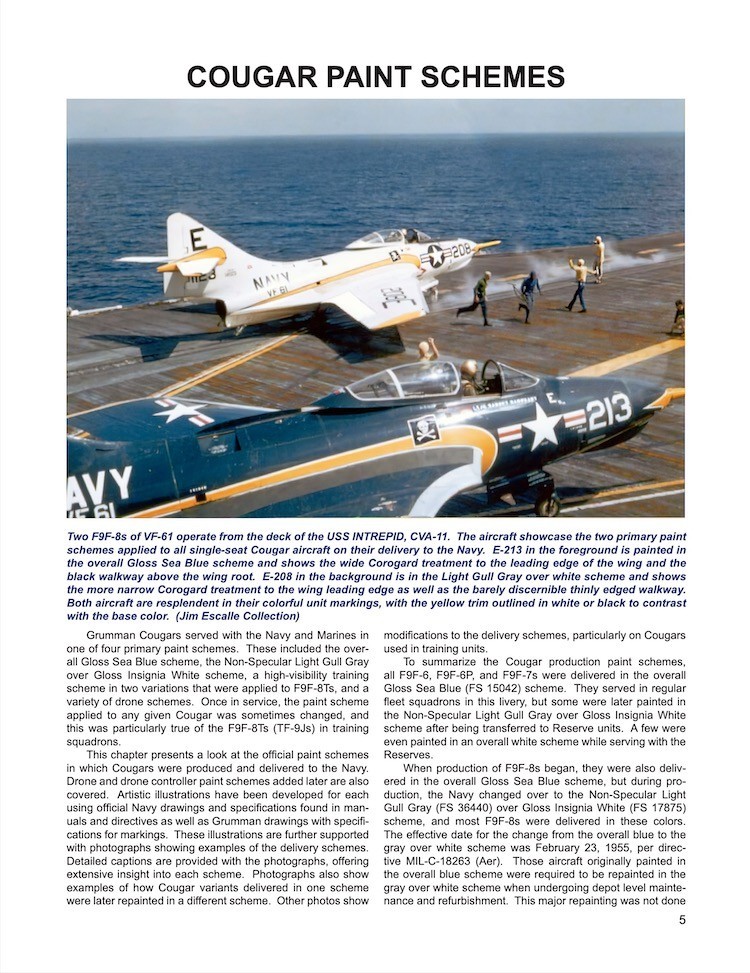 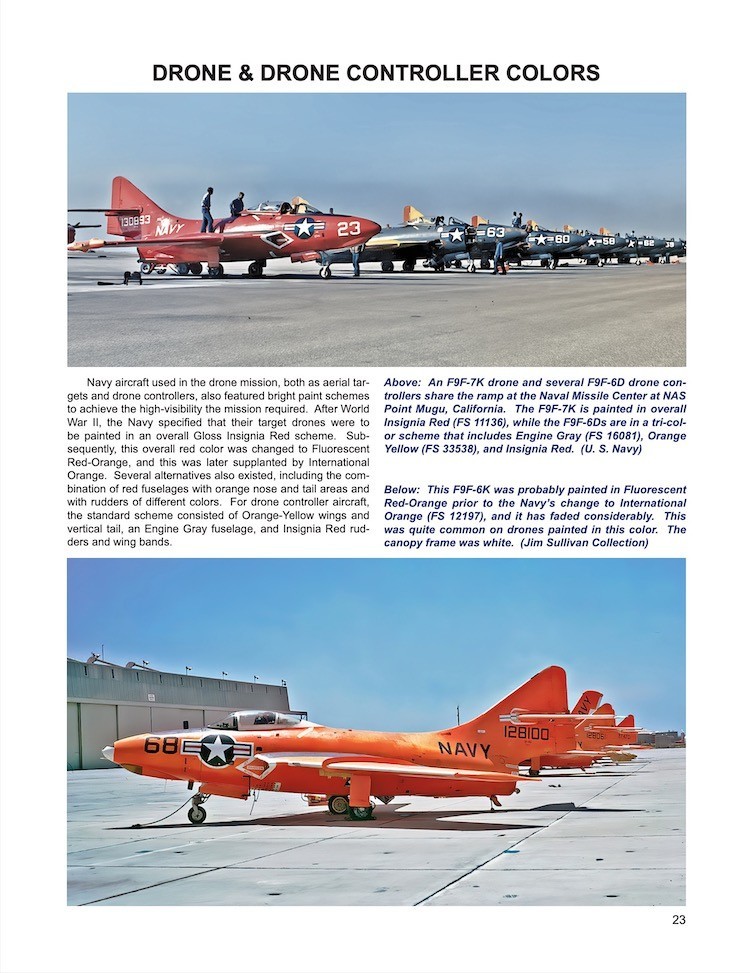 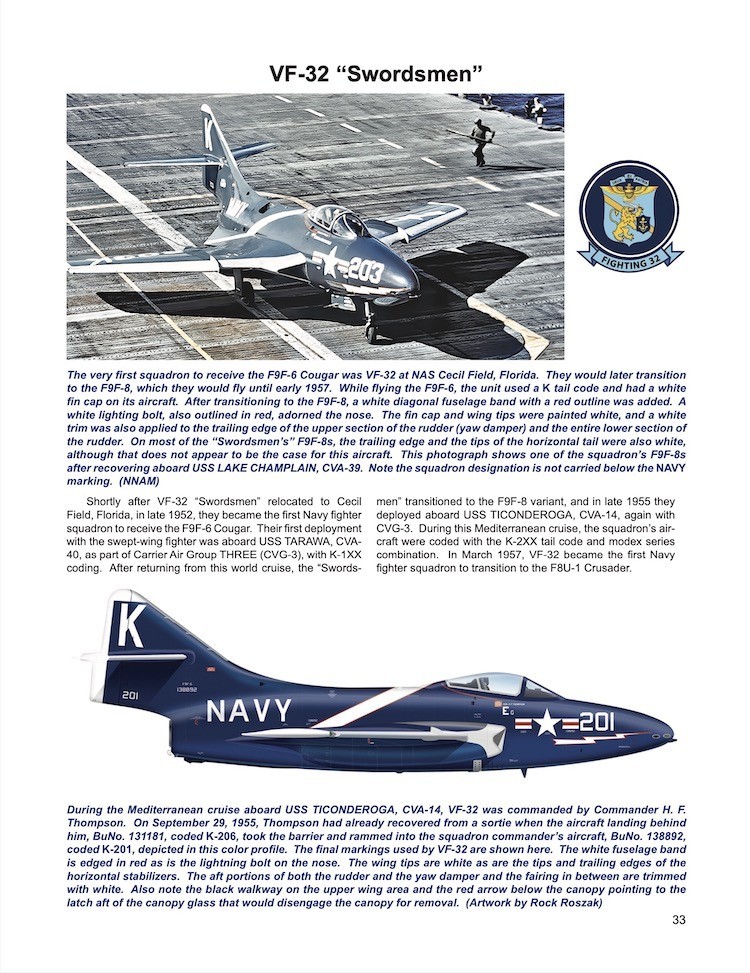 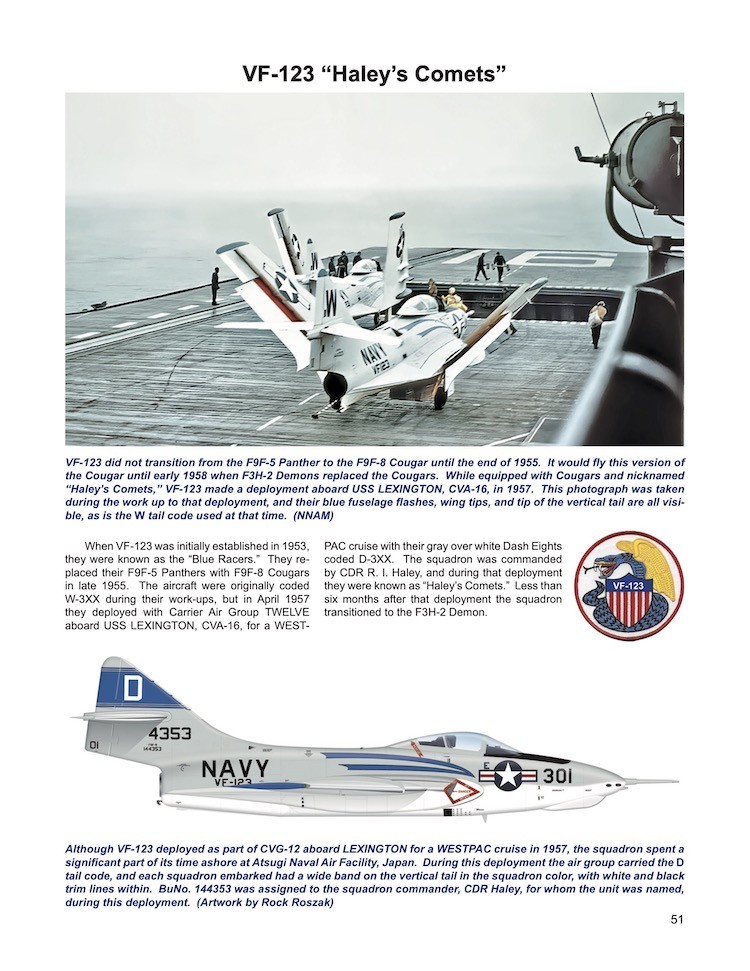 As with other D&S books I have reviewed, this text is richly supported with color and black-and-white photography.     D&S populates the book with a gallery of choice images, a signature strength of the series.   Each image in this book can be considered studio quality.  Such clarity affords the reader to see fascinating detail.  The authors point out that rescue and warning markings could vary widely in placement outside of fighter and attack squadrons.  USN's early jets were born in the era of Kodachrome and the revolution of easily obtained high performance color film.  Naval aircraft of the era were very colorful and this book vividly presents that fact.  So supreme is the printing that some color photos of trainers with florescent red-orange are incredibly intense and almost hurt my eyes!  You will also find excellent color views of carrier deck colors.

I was surprised to learn that a few Cougars lasted into the 1980s in unique roles other than drones.  Modelers and historians should find intriguing images in this book.  A notable few are:

·        An Essex-class flight deck, while stained brown, shows no sign of plank construction

·        Flight deck scenes with aircraft tugs and other equipment

·        A Cougar with the entire inner wing painted Corogard

·        Heavily weathered jets, both from the elements, and maintenance

·        Cougar being hoisted aboard an aircraft carrier

I deviated from my routine and listed each of the original color aircraft profiles with its respective squadron history.  All are profiles, most with landing gear up.   Artist Rock Roszak made them a standard size although there are a handful that are smaller.  They are clear, appropriately detailed, and show muted highlights and shading.  Other illustrations include:

Many tables present information and data in easily digestible formats.

Those tables are perfect for quick reference. The painting and marking diagrams show, clearly and easily followed, essential knowledge for properly painting and finishing your Cougar.  The photographs provide clear visual verification of standards and exceptions of colors and markings of this Grumman cat.  And of course, the numerous color profiles remove variations of color caused by lighting, film processing, and weathering to standardize the colors these cats wore.  These visuals support and enhance the text unequivocally. 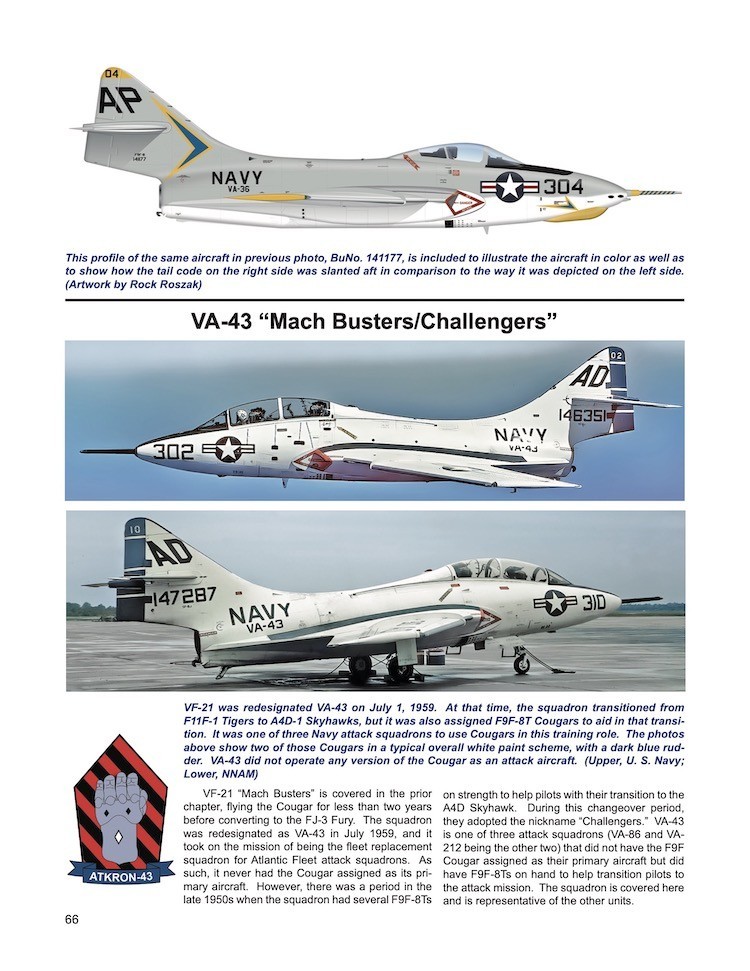 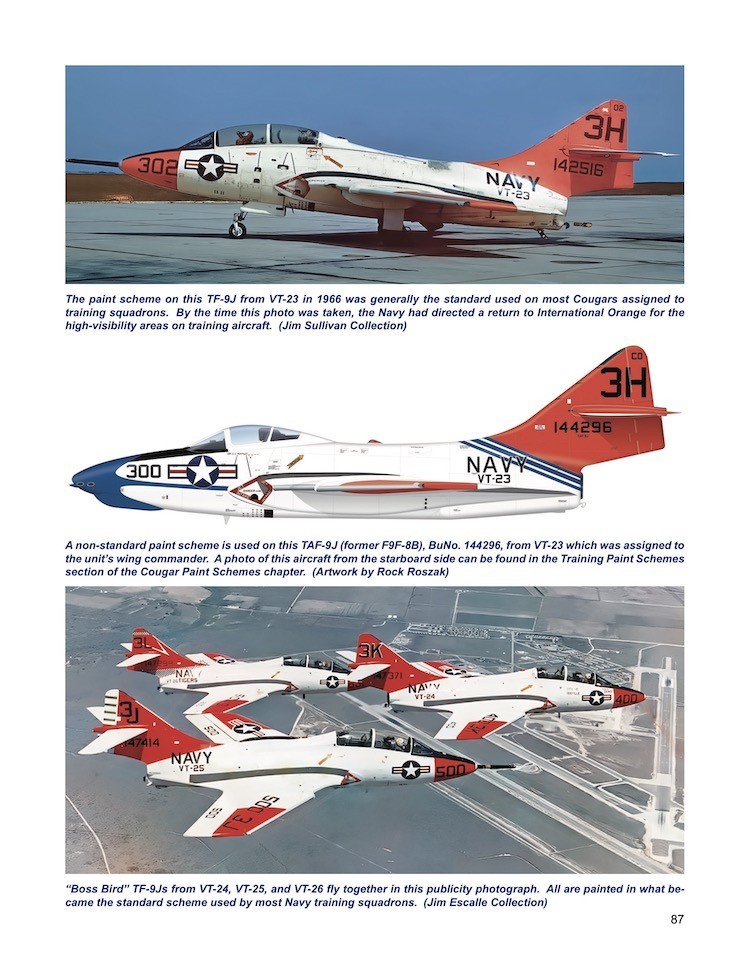 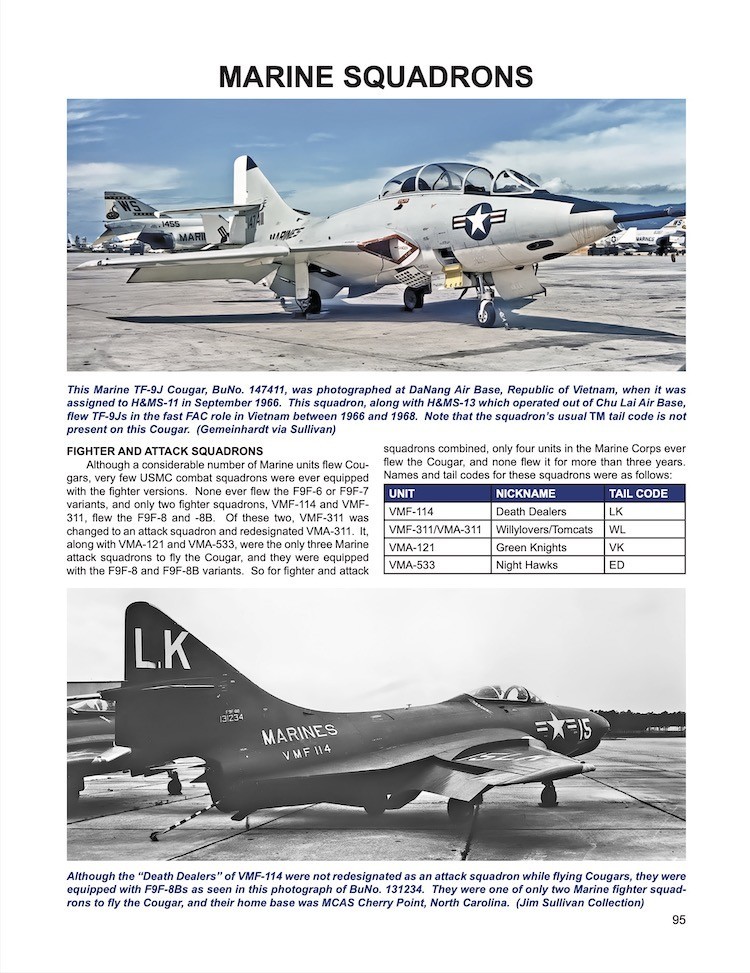 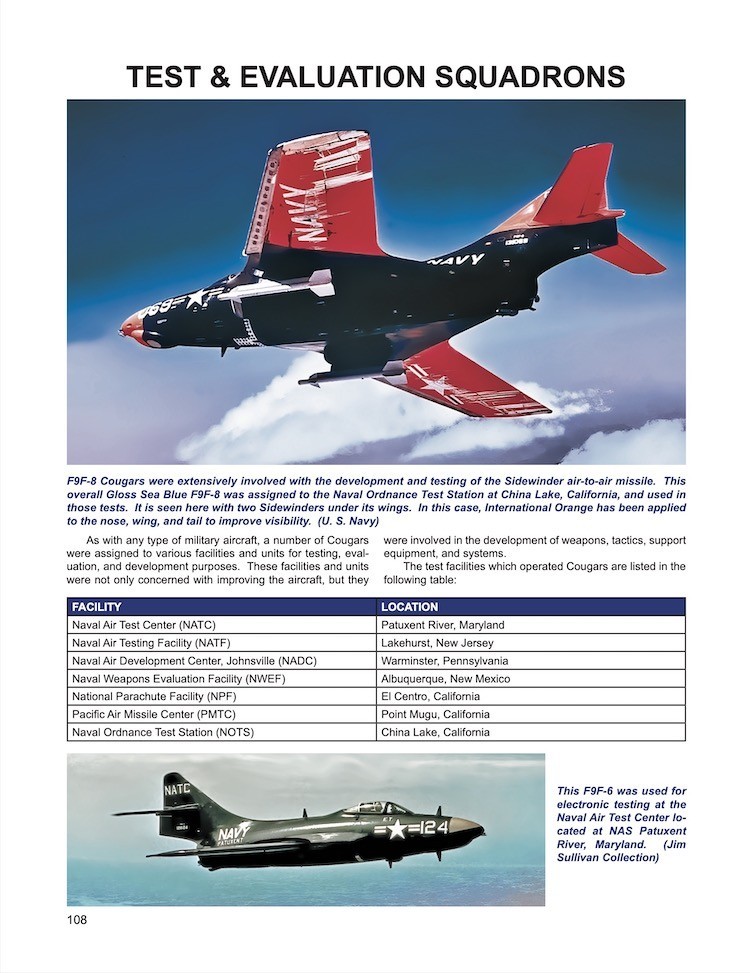 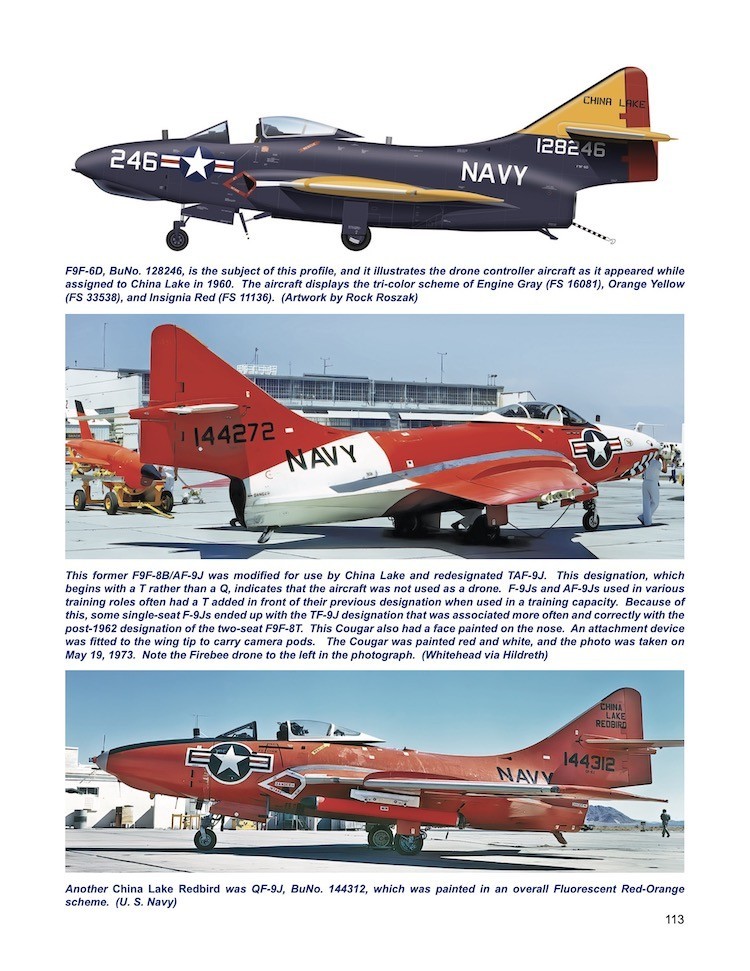 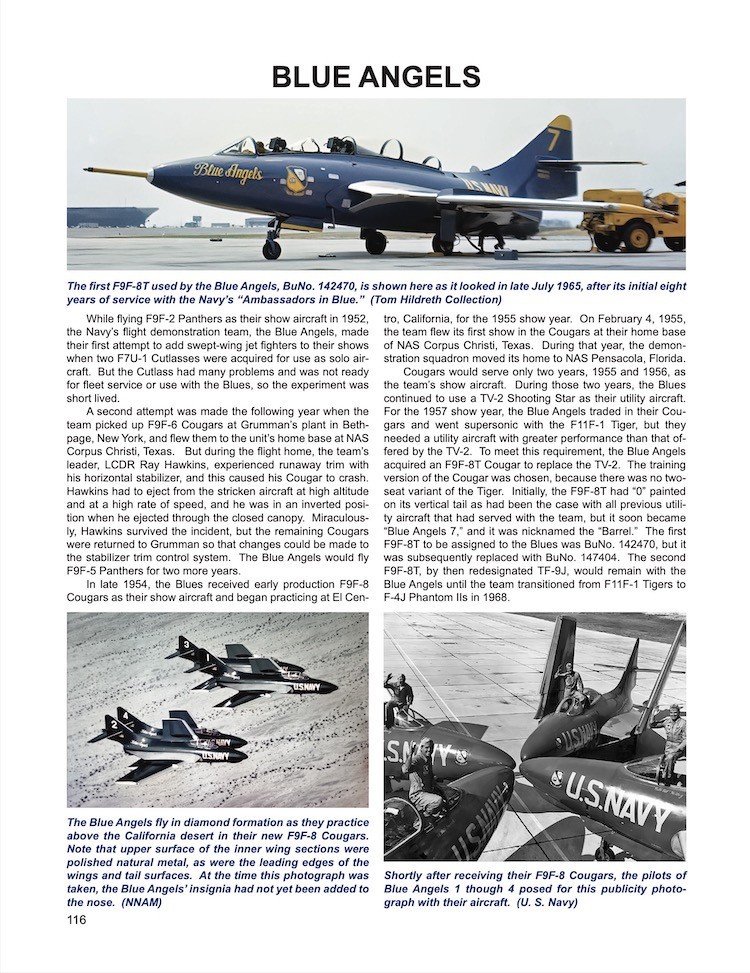 Colors & Markings of the F9F Cougar in U. S. Navy & Marine Corps Service is another exceptional aircraft presentation by Detail in Scale.  I do not know of every book about the Cougar but between this title and the nuts-and-bolts title, I haven’t found a more comprehensive history of Grumman’s first swept-wing cat.  In great detail the excellent text and an extraordinary gallery of photographs and illustrations bring the Cougar to life for modelers, artists, and historians. Tables present useful and interesting data effectively.

I can't think of any meaningful complaints about this book.  Modelers and students of the F9F Cougar, Cold War combat aircraft, and early Naval jets should be thrilled with this book.  Enthusiastically recommended.

Please remember, when contacting retailers or manufacturers, to mention that you saw this product highlighted here - on AEROSCALE.