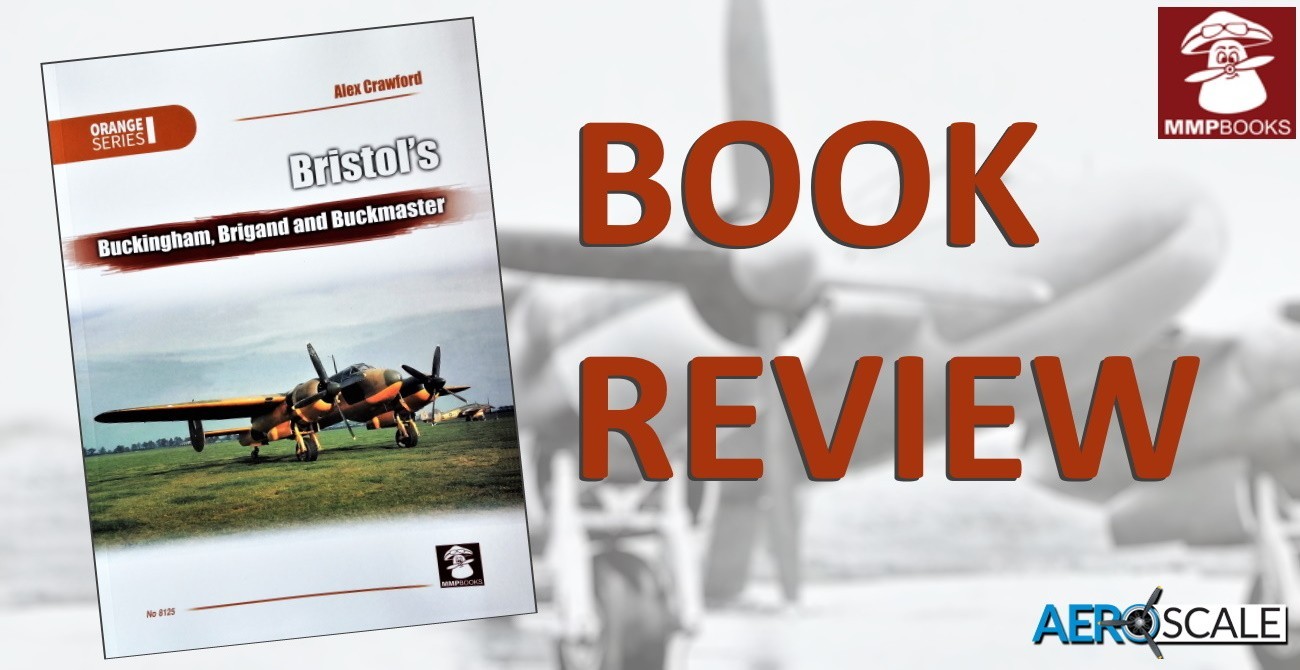 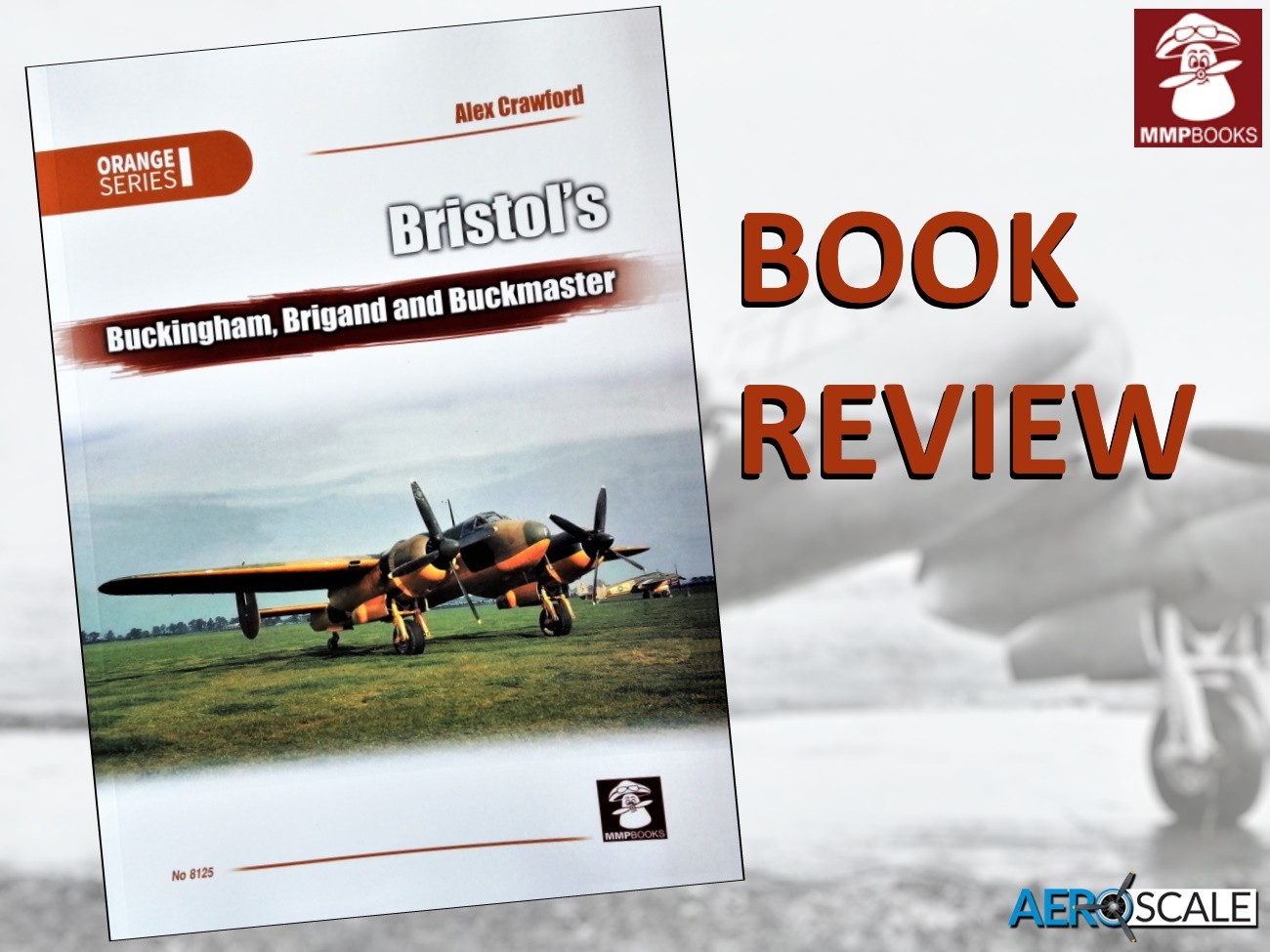 Bristol’s Buckingham, Brigand and Buckmaster would take on a similar evolutionary path, though a significantly more complicated one to the Bristol earlier combat aircraft: the Beaufort and Beaufighter.  Although the Buckingham, Brigand and Buckmaster  are not quite so familiar as the Beaufighter and Beaufort, its none the less a fascinating story. 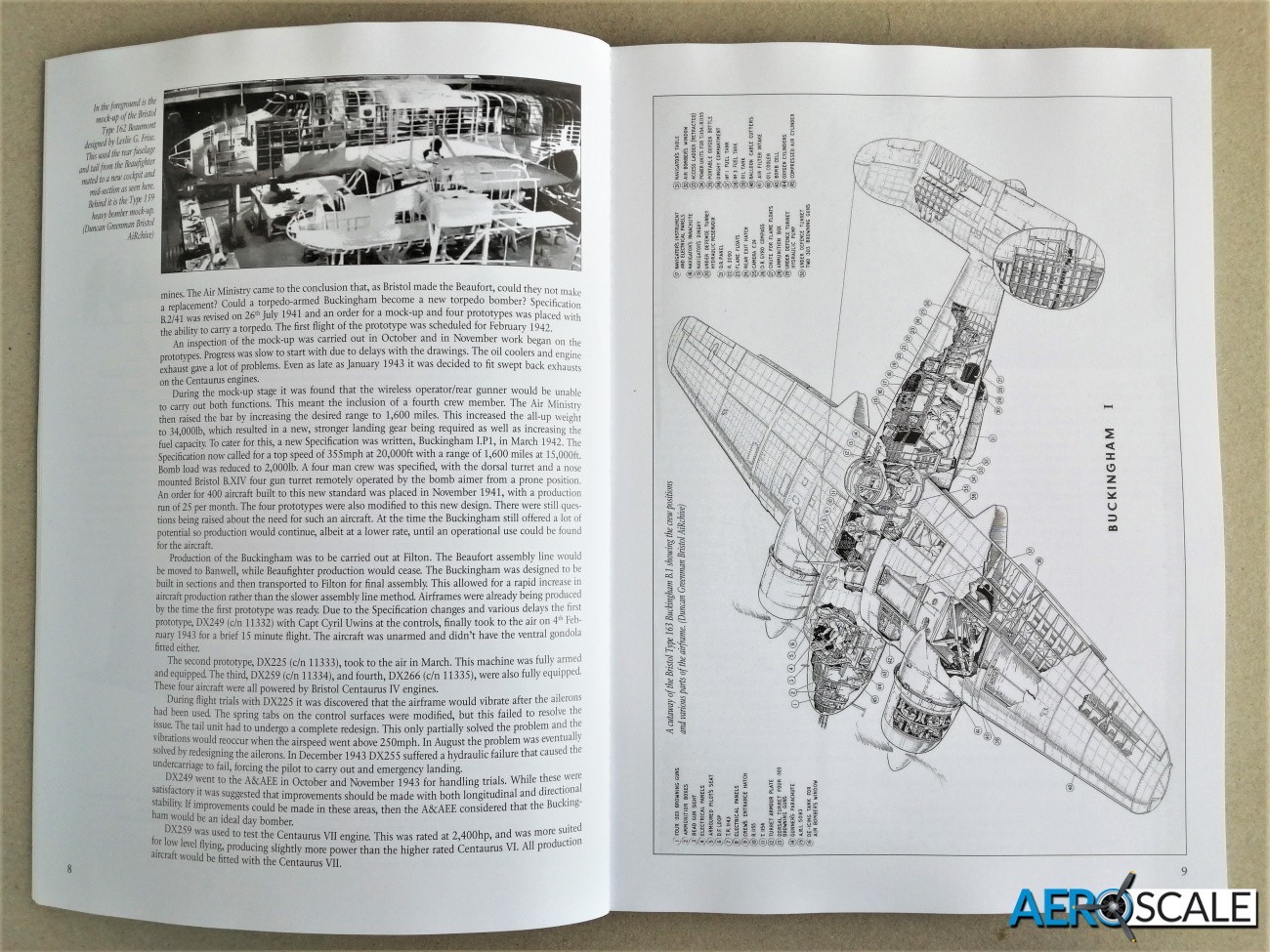 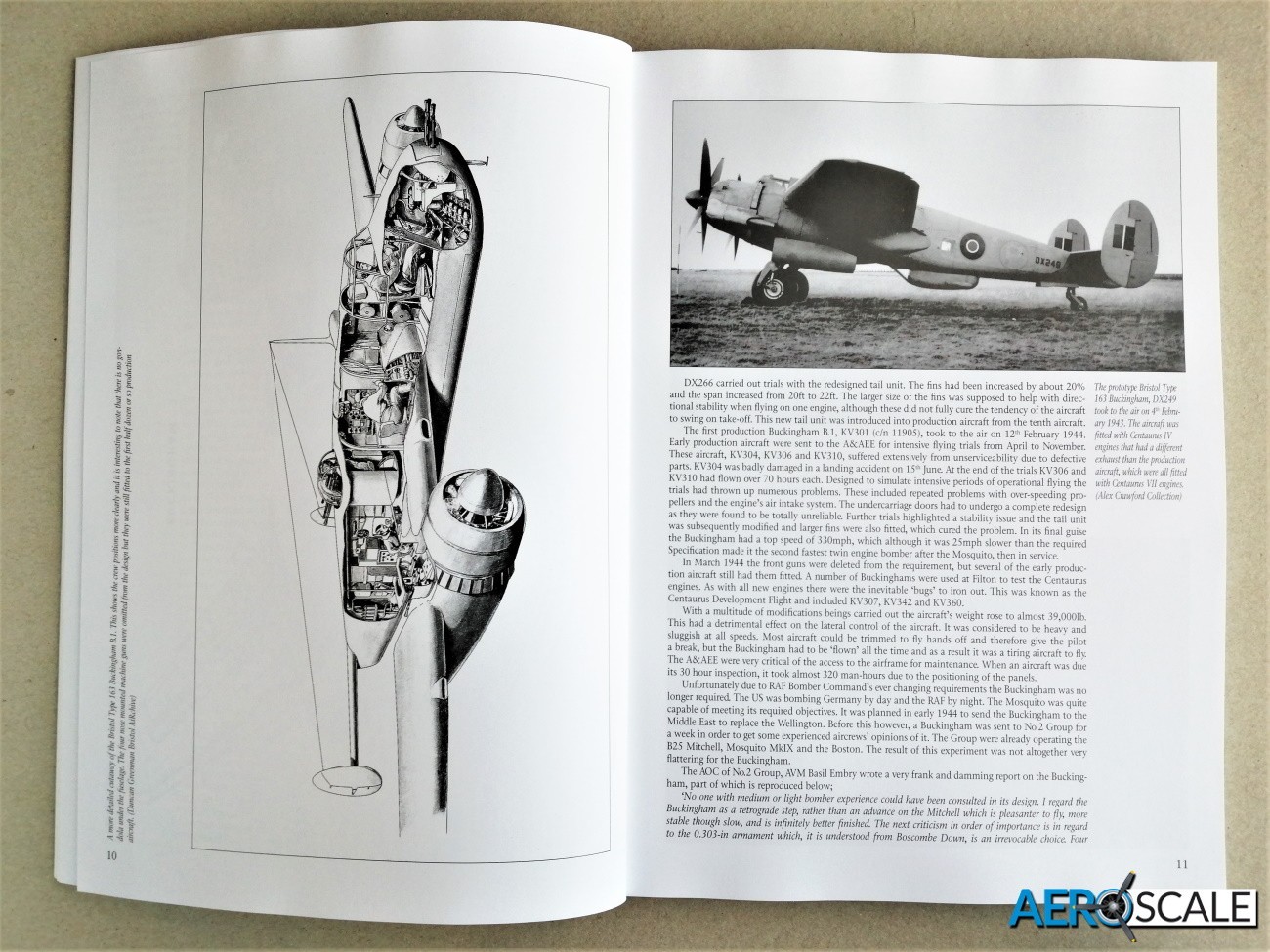 This book is divided into several well illustrated chapters: 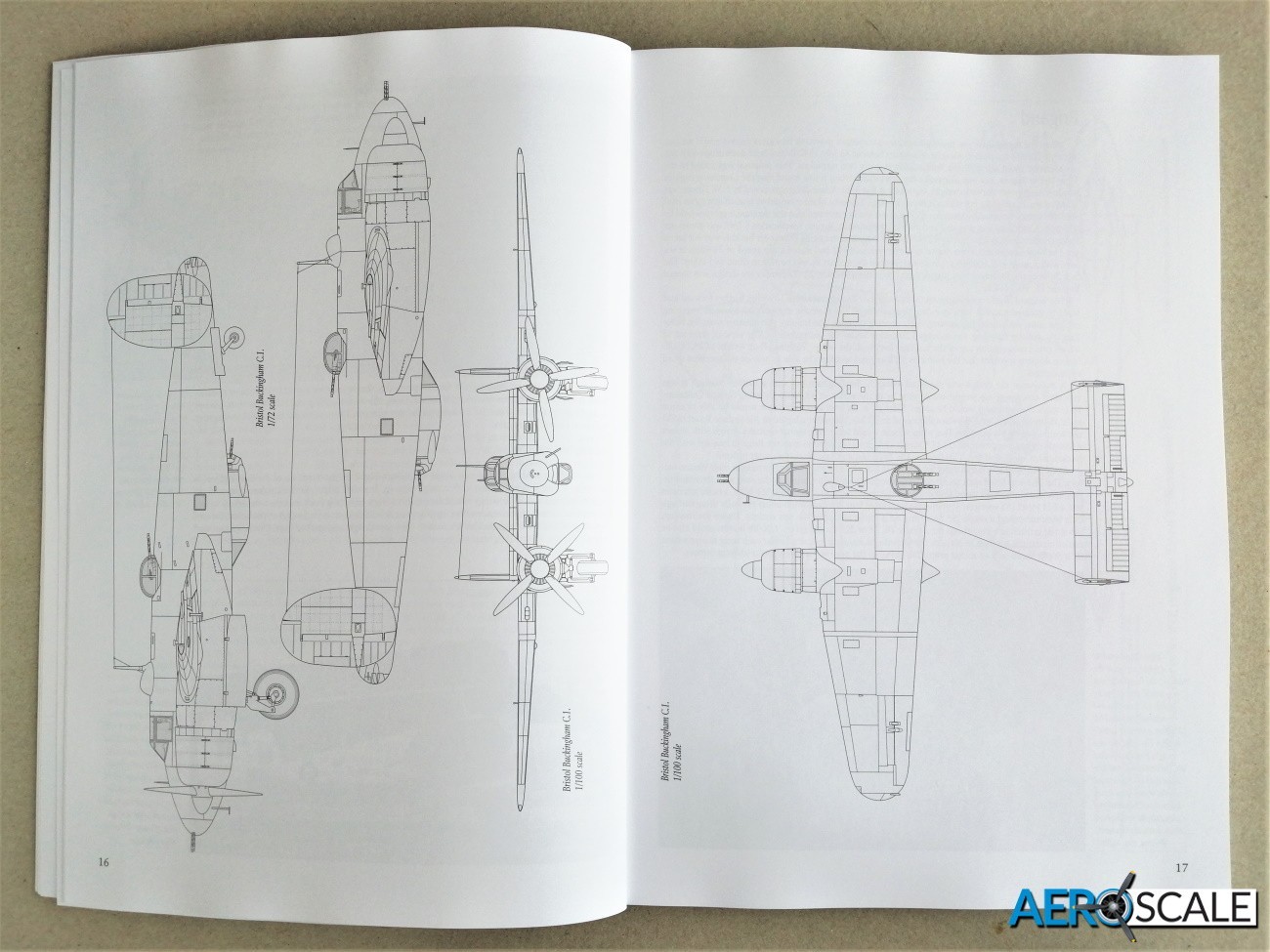 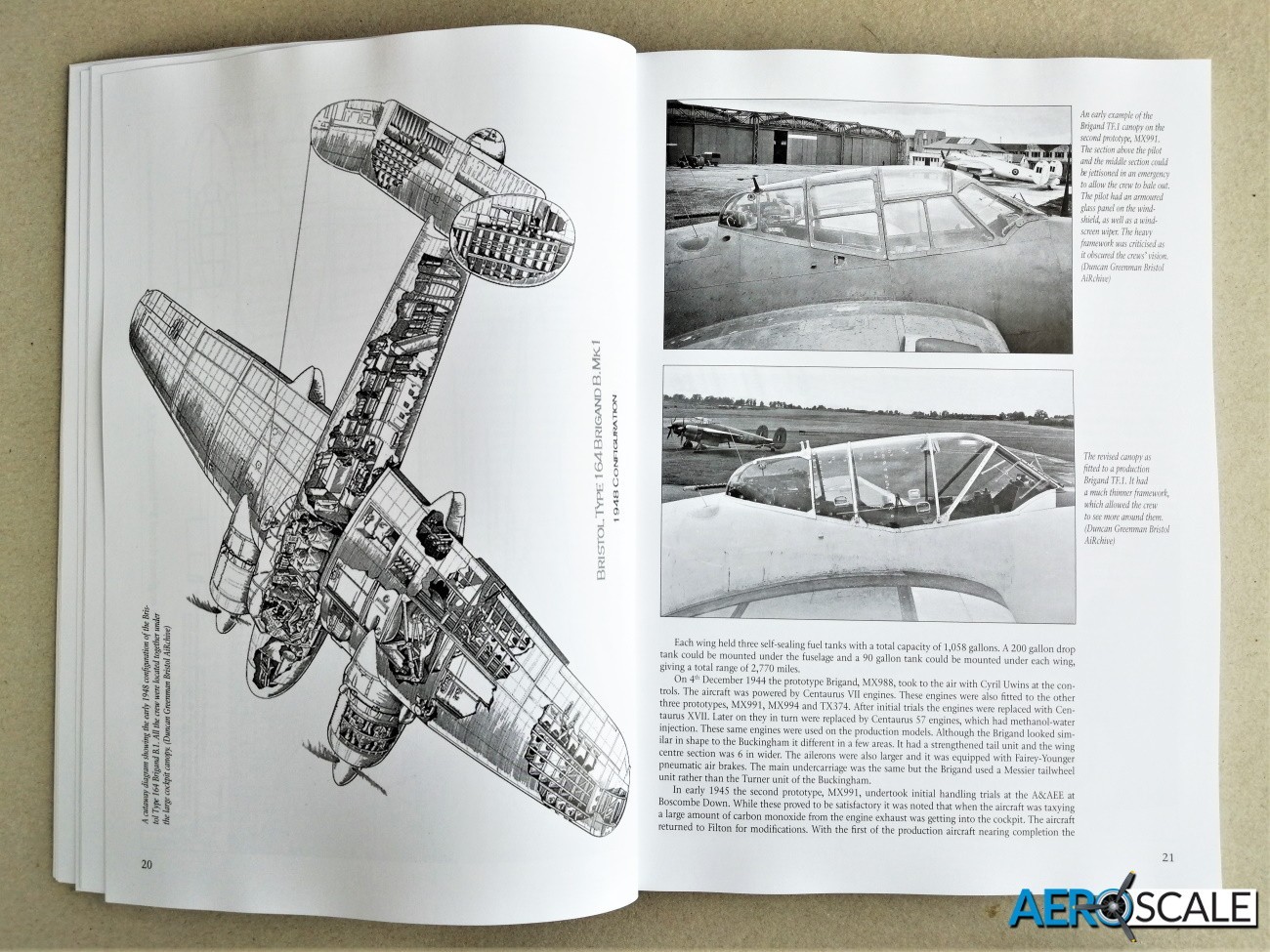 The introduction provides a brief description of the three aircraft and the roles they were planned to do.

Design and development of all three types is discussed in the first chapter. It tells a not unfamiliar tale of specification reviews and the resultant delays. The Buckingham was a classic case of delays due to significant redesigns. It went from a two-crew bomber to one with four. It was originally to utilise the wings, engines, and tail of the Beaufighter, though in the end a totally new set of specifications and redesigns were required. In the end 119 Buckingham’s of all types were built, though none saw service. The superior Mosquito was in service and the American built Boston’s and Mitchell’s were better suited to condition in the Middle east. 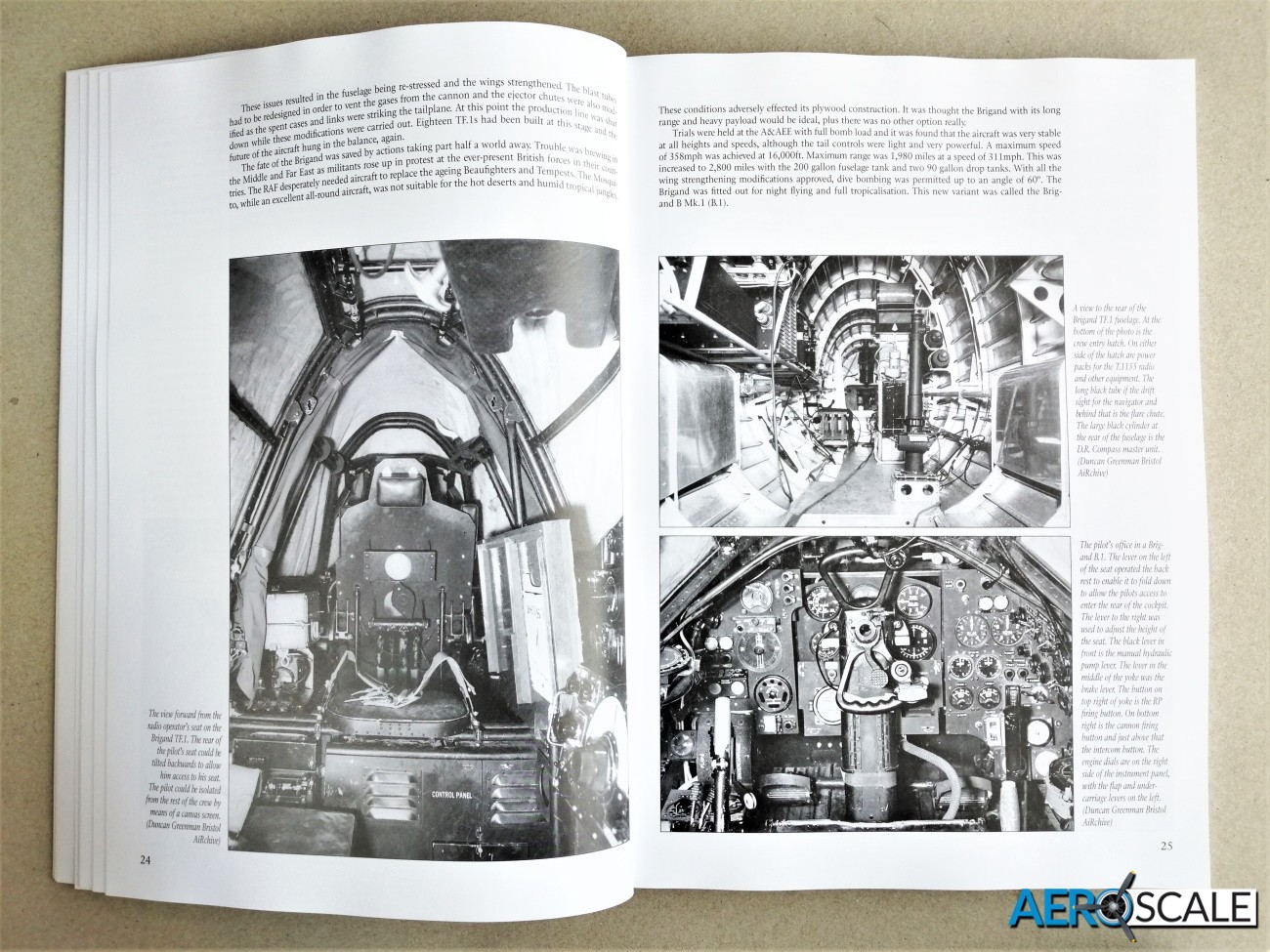 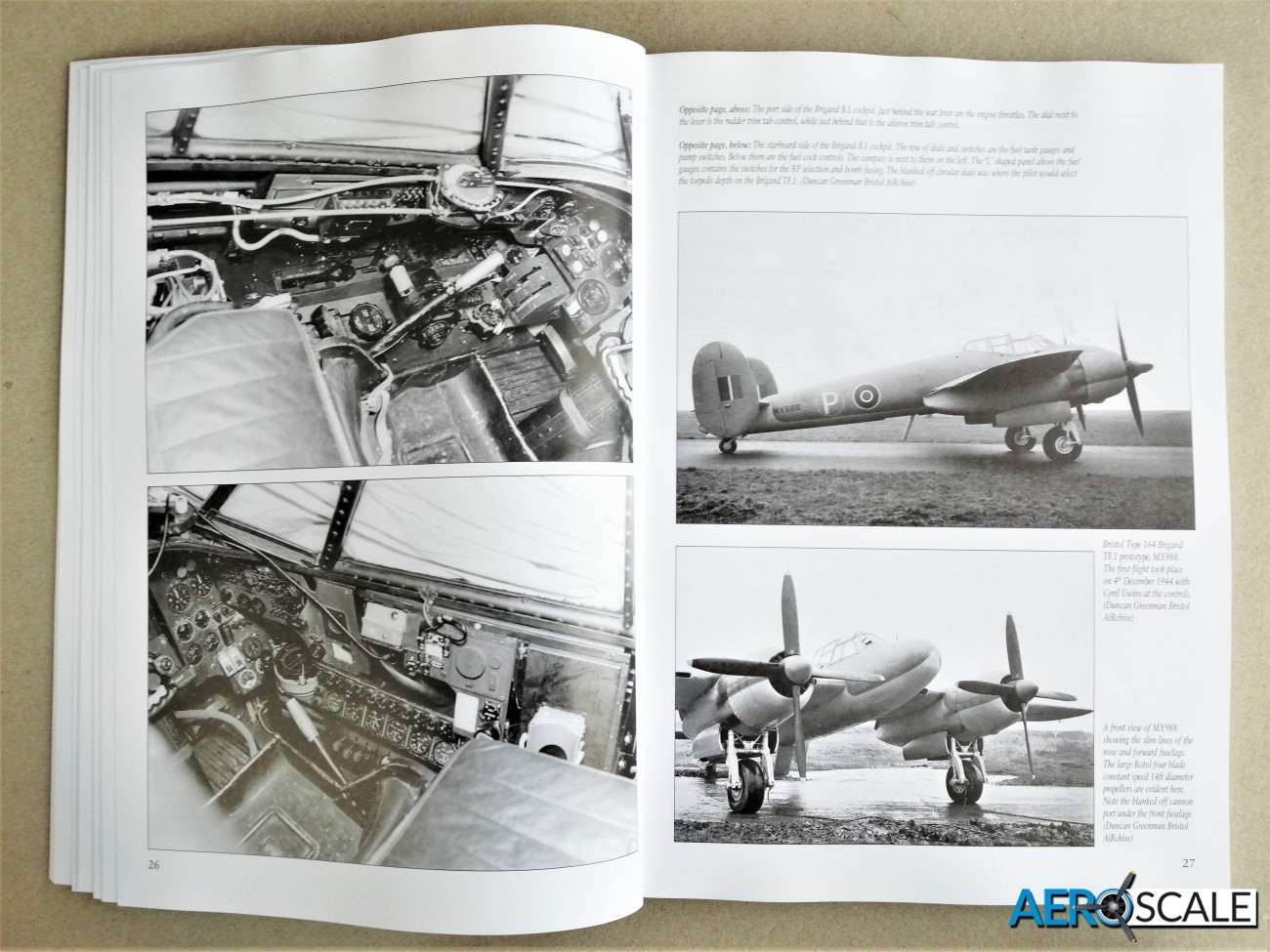 The Brigand originally planned as a torpedo bomber entered production too late for the war. It had a troubled flight development revealing structural and mechanical weaknesses. It was the post WWII conflicts in the Middle and Far East that led to the much-troubled Brigand seeing service.

The chapter is profusely illustrated with photographs, design and scale [1:72 and 1:100] drawings as well as cutaway illustrations. It’s interesting seeing the design philosophy of the crew set up of the Buckingham compared to the crew arrangement of the Brigand. 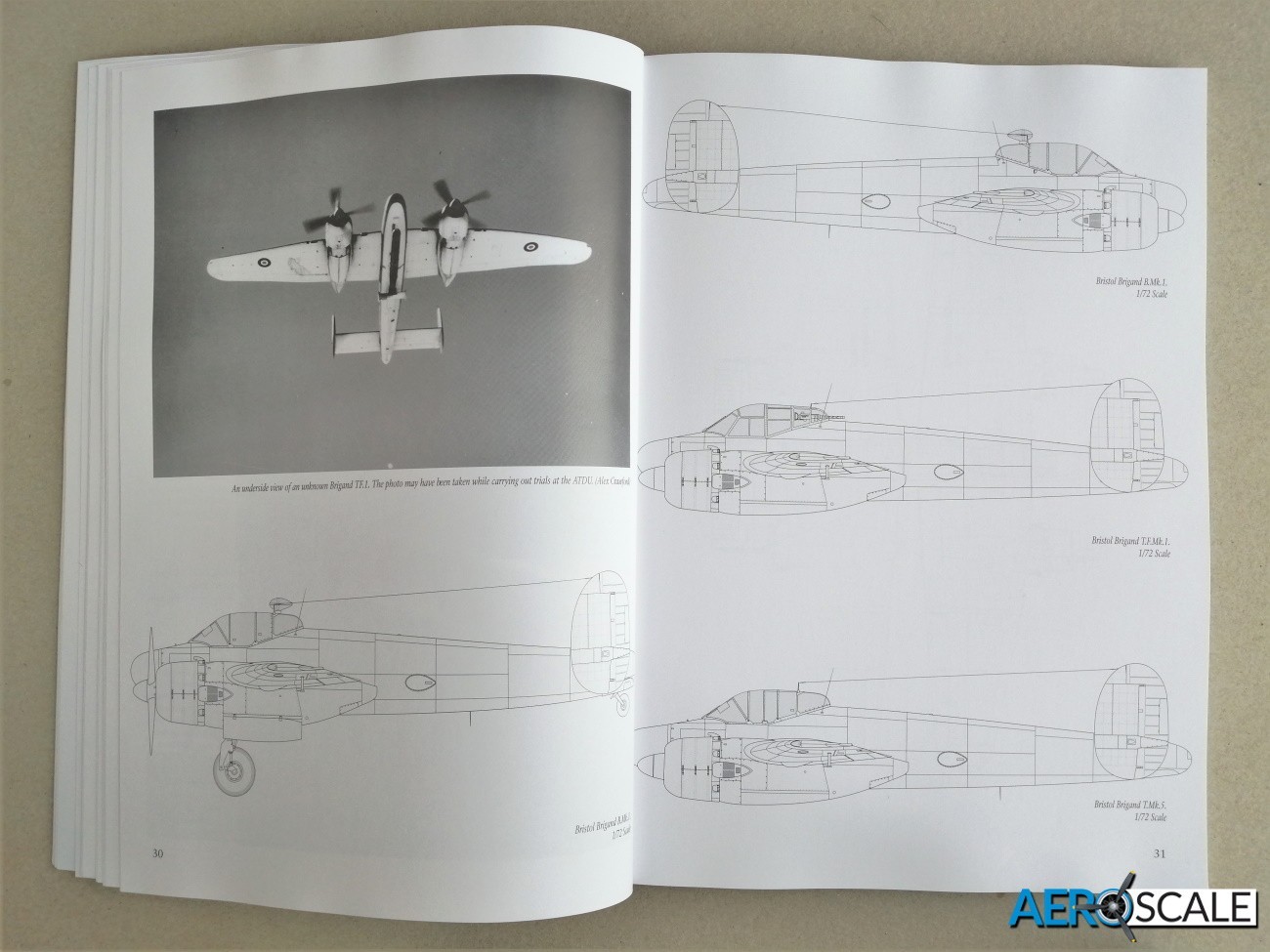 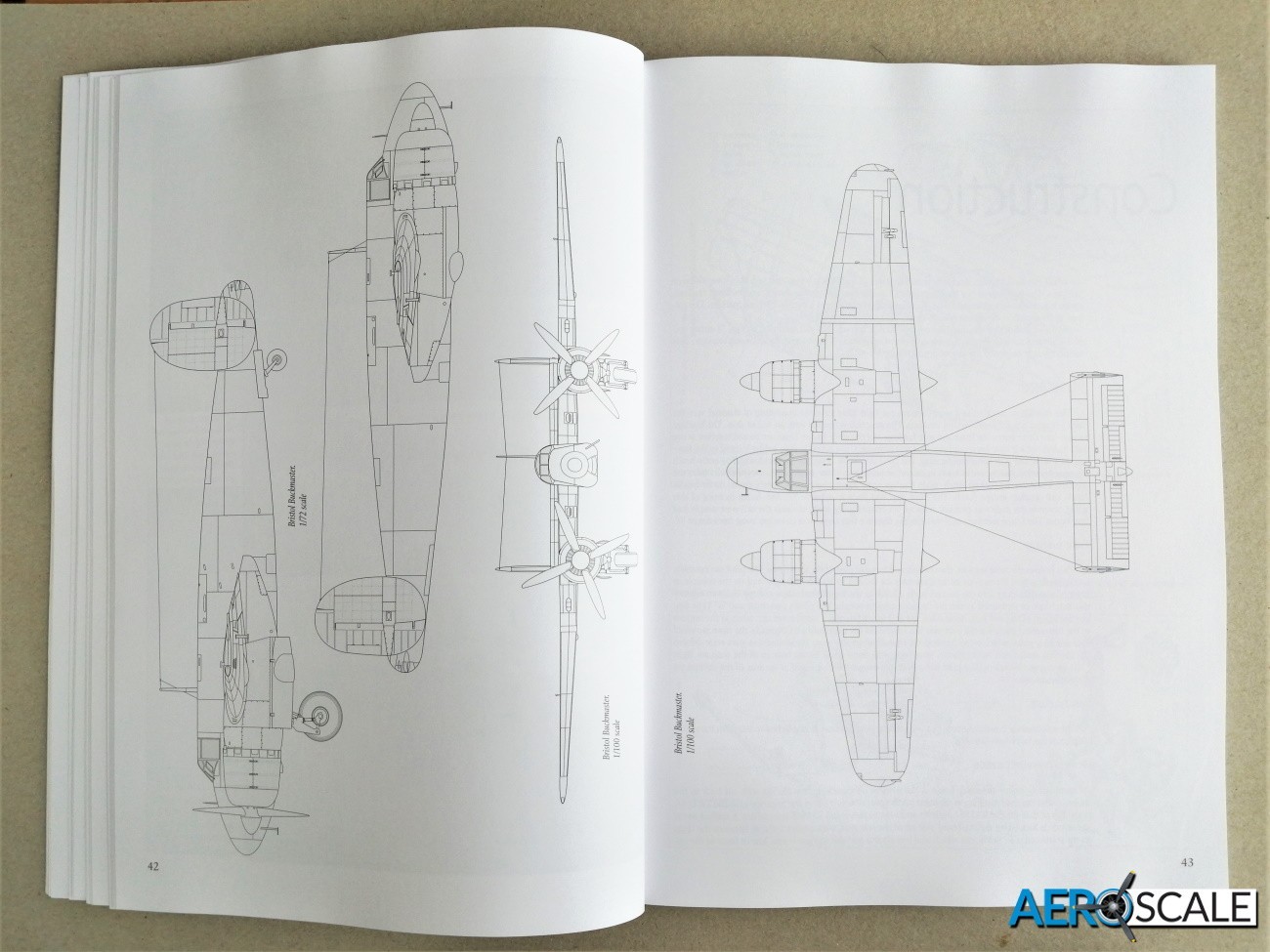 The description of the construction is detailed with written explanations of the build and layout of all three types. Essentially the wings and tail were similar on all three aircraft, but the fuselages were completely different. The inclusion of many design drawings and factory photographs of the various stages of the construction. 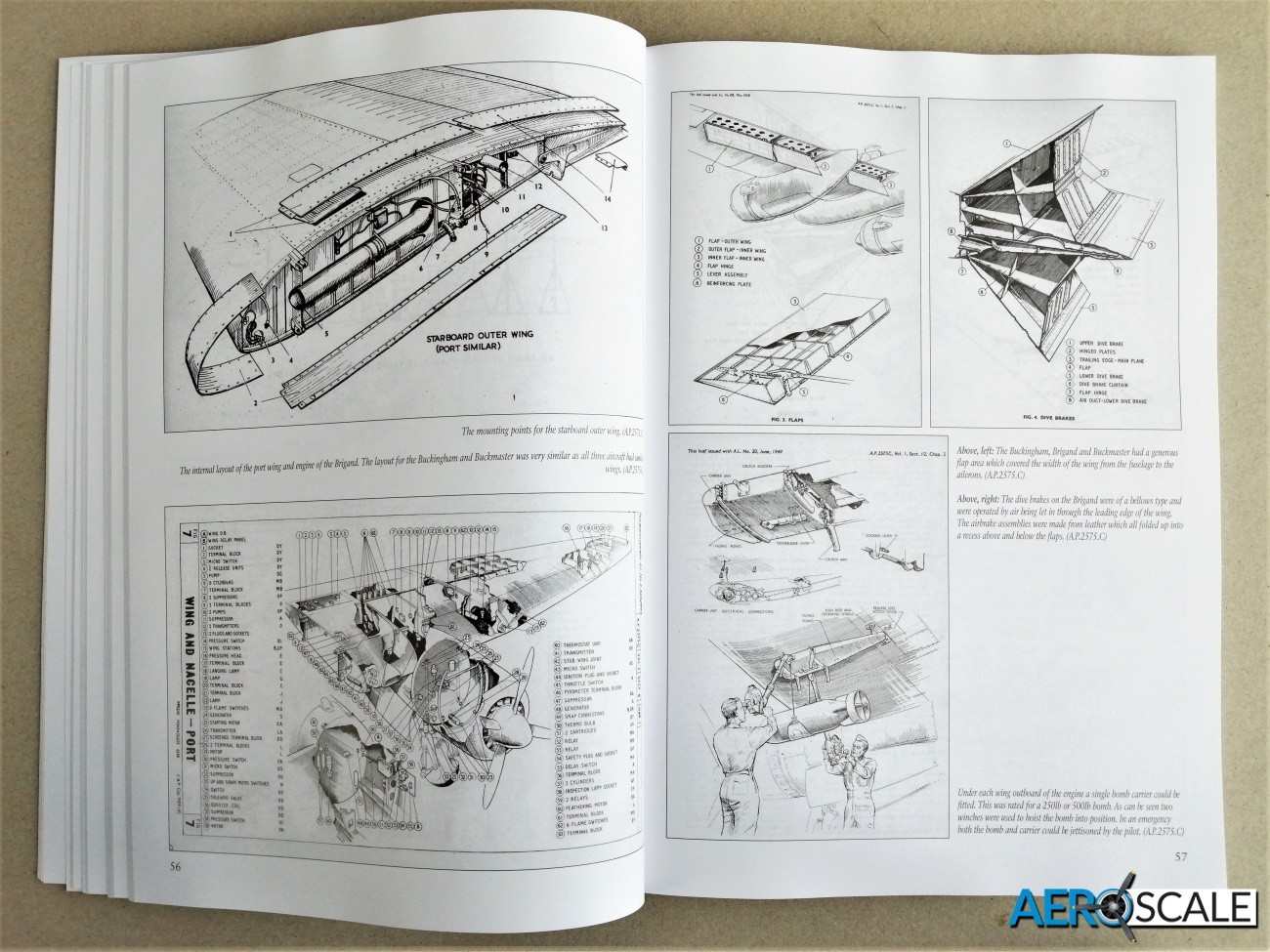 Service entry for the Brigand and Buckmaster includes training and operations with 228 OCU [training], 8 Squadron, 45 Squadron and 84 Squadron. Squadron Commanders are discussed as well as a general description of Squadron posting, the role and experience of operating the types. There is an interesting account of 8Sq operating the Brigand attacking Wadi Hatib, Western Aden on Operation Firework in July 1952. 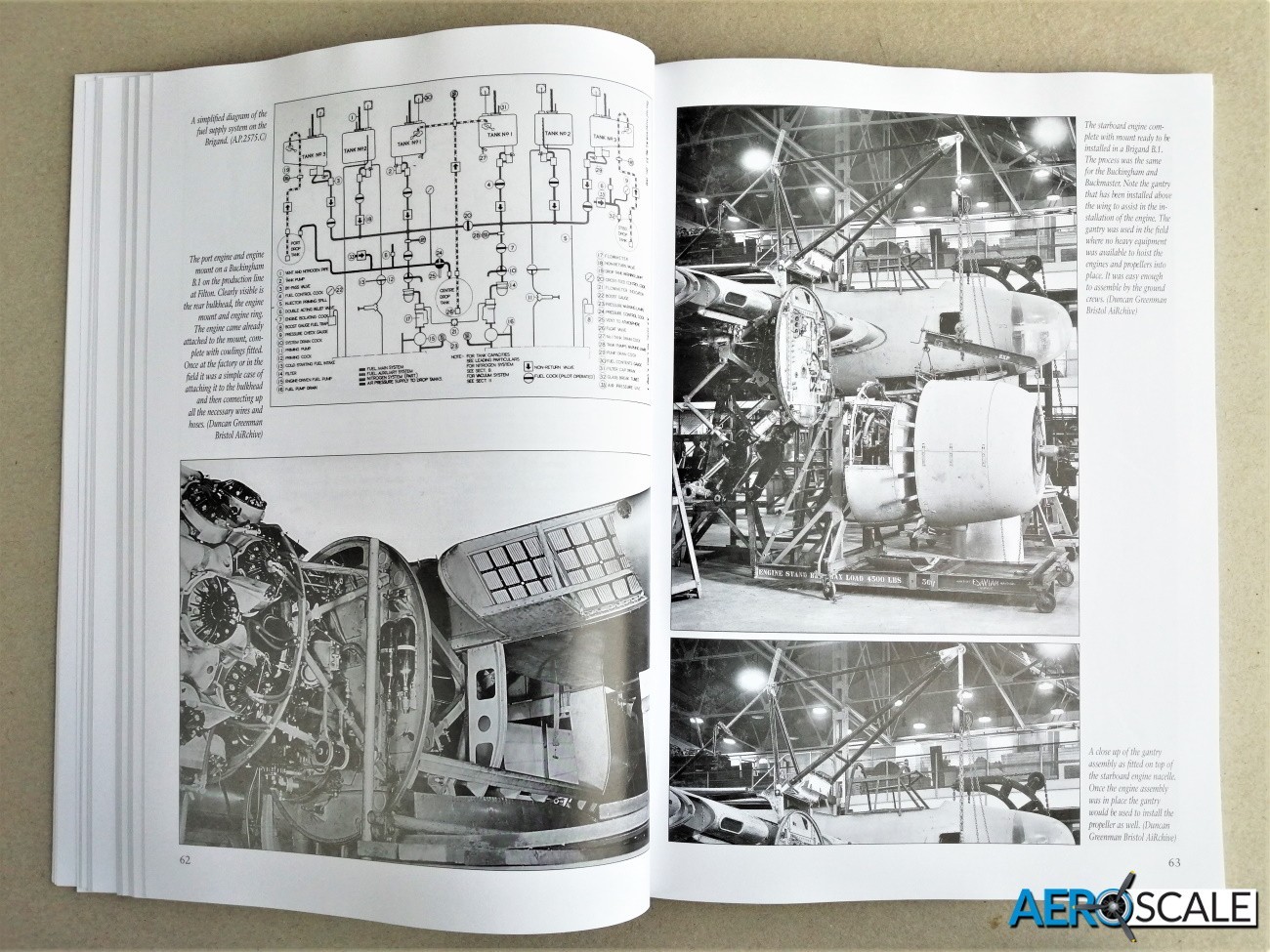 Operation Firedog is the codename for the RAF’s air operation in Malaya against the Malayan Races Liberation Army [MRLA] and the Communist Terrorists [CT] between 1948 and 1960. This was to be the swansong of operating radial engine aircraft in the strike role. The Brigand was withdrawn from the frontlines in December 1952 after a series of structural failures resulting in the loss of wings. Until its withdrawal it had performed for a role they were not intended for. The squadrons worked in conjunction with ground forces in the jungles and high ground. All the various operations are listed and there are detailed accounts written about each one.

There is a short chapter on the Brigand Met.3, Brigand TF.1 modified for meteorological work. Modifications include de-icing system, extra fuel tanks and auto pilot for the long flights. There is a fascinating account by Tony Fairburn of a typical ‘met flight’ around Ceylon [Sri Lanka]. 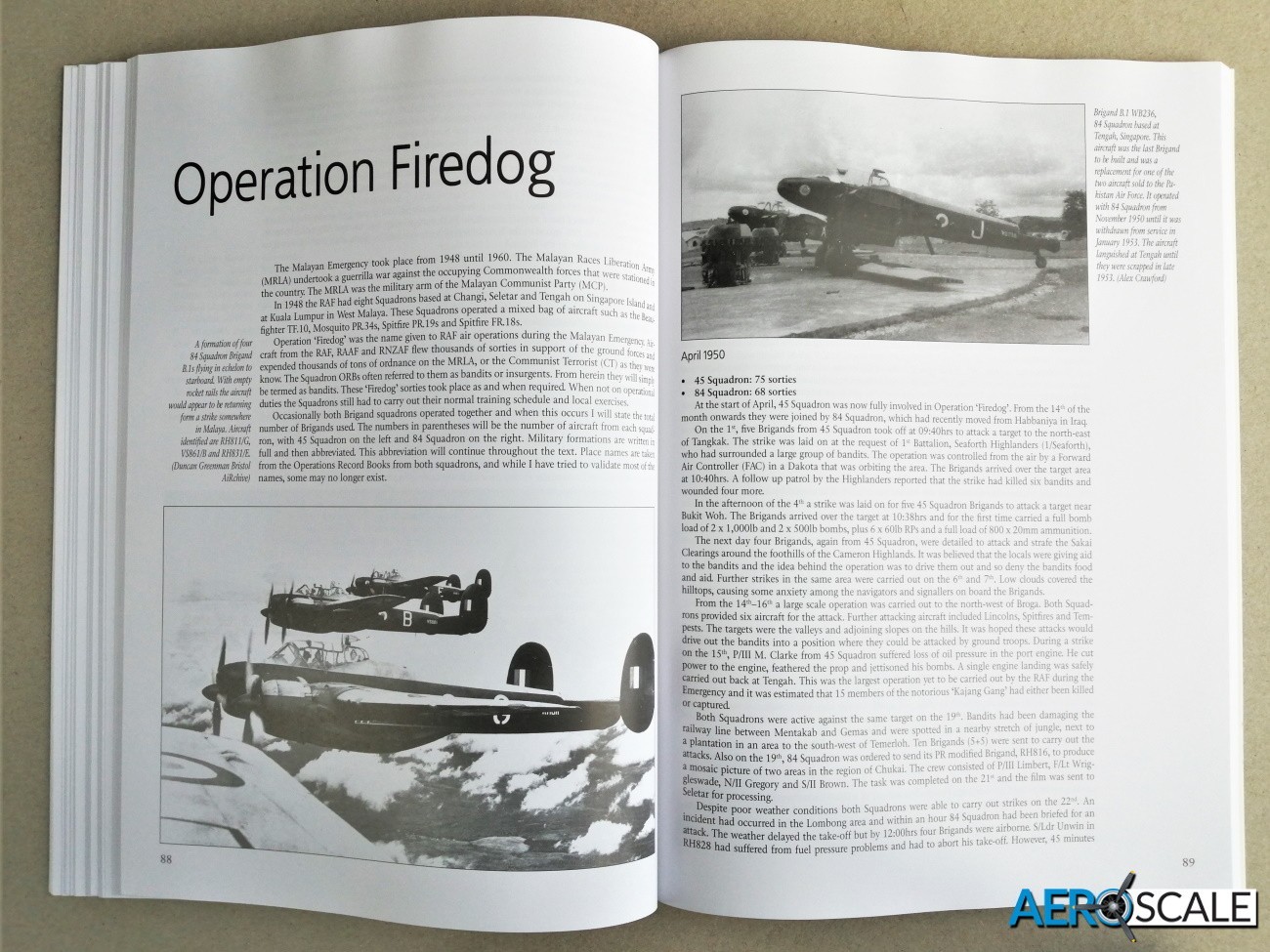 Brigand T.4/T.5 were used to train radar operators on the AI.10 radar, that were fitted to the Vampire, Venom and Meteor night fighters. There is a short description of the principles and operation of the AI.10 radar.

As there is just a page on the foreign operators of the trio you can surmise that they were not a great export success. In fact, the Brigand had trial with three Air Forces, without any sales. 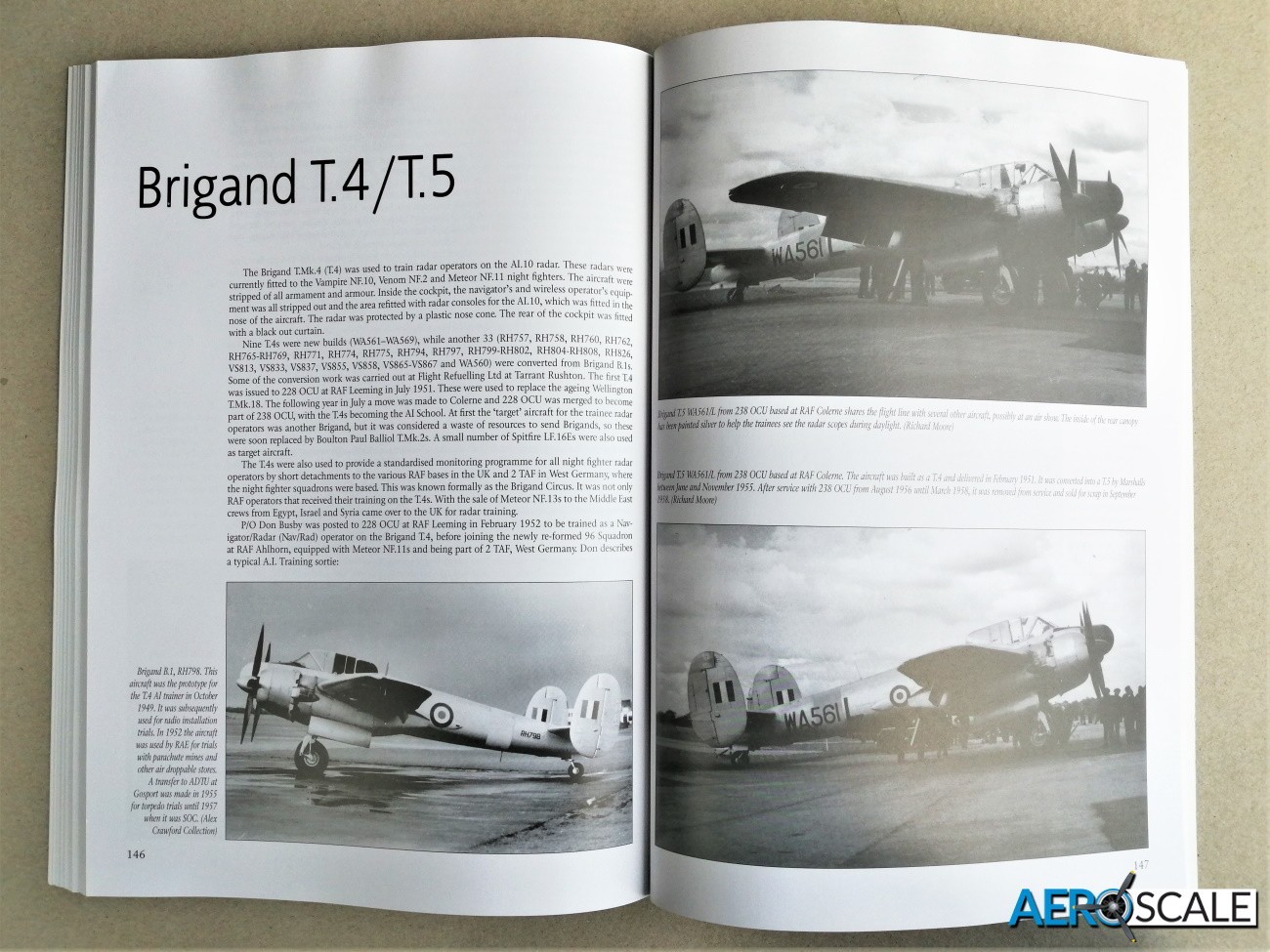 The section on camouflage and markings is backed up at the end of the book with six pages of fifteen colour profiles. A single Bristol Buckmaster has upper and lower colour plan views too. The type of roundels are also described. There is a table with some information on the specifications on the trio. The Buckmaster was no slouch with a cruising speed at 18’000ft of 325mph.

All the Buckinghams, Brigands and Buckmasters production details are listed, with marks and serial numbers listed. Plans for a photo reconnaissance version of the Buckingham never materialised. There are two pages and a bit on the losses suffered by the trio. Listed are the causes and any casualties. 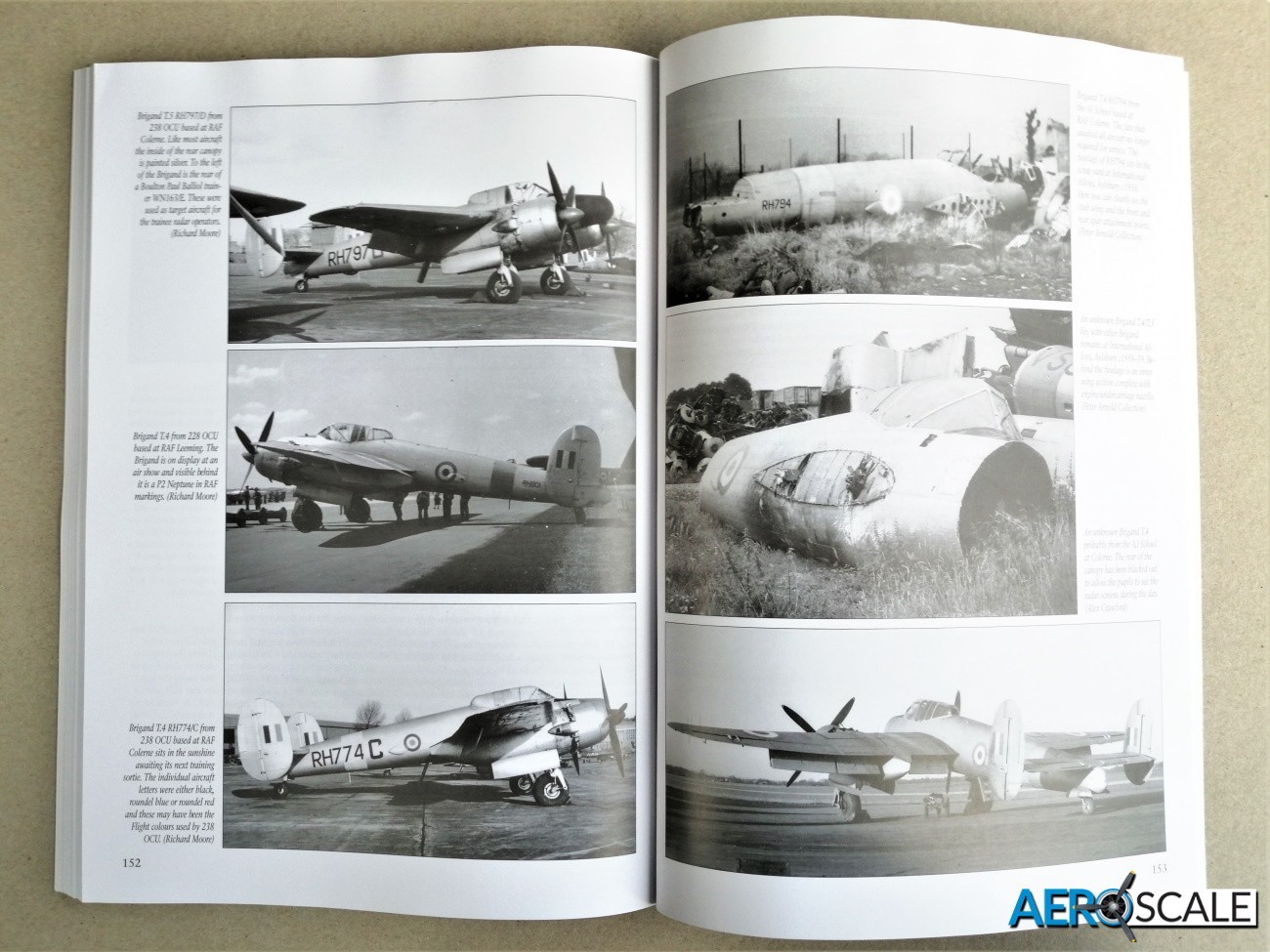 Of the 375 Buckingham’s, Brigand’s and Buckmaster’s built only one fuselage of a Brigand TF.1 survives and is in storage at RAF Cosford. There are five colour and one monochrome photos of what is left. Sad to see the state it’s in, but still, it’s a survivor of the RAF’s last radial engine strike aircraft

As mentioned, the book is profusely illustrated with many black and white photographs. There are line drawings and illustration as well as numerous scale drawings in 1:72 and 1:100 scales.

This is a superbly researched and detailed look at Bristol’s Buckingham, Brigand and Buckmaster by the author Alex Crawford. Although only the Brigand and Buckmaster saw service, it is still a fascinating looking at the Buckingham. The text, drawings, illustrations, and photos are hugely informative and a fascinating read. Highly recommended for both aviation historians and modellers alike.

Well, my creative juices are flowing after reading this book. So, I checked out what kits are available. Valom recently released a plastic injected 1:72 scale Buckingham C.Mk.I and a B.I, as well as a Bristol Brigand TF.Mk.I, B Mk.I [x 2], and a T.Mk.4. Valom also released a 1:72 scale Bristol Buckmaster T Mk.1 [x 2] 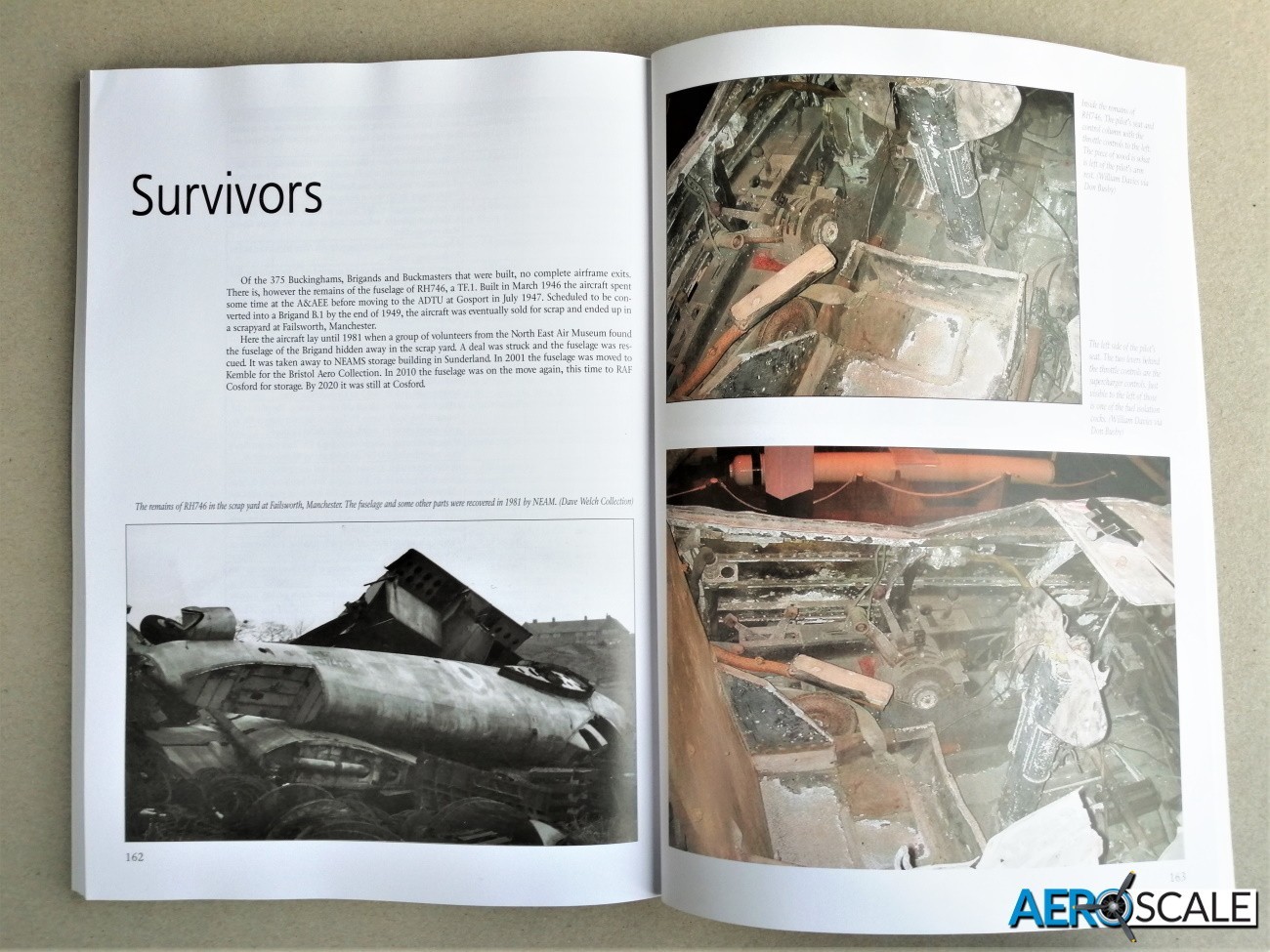 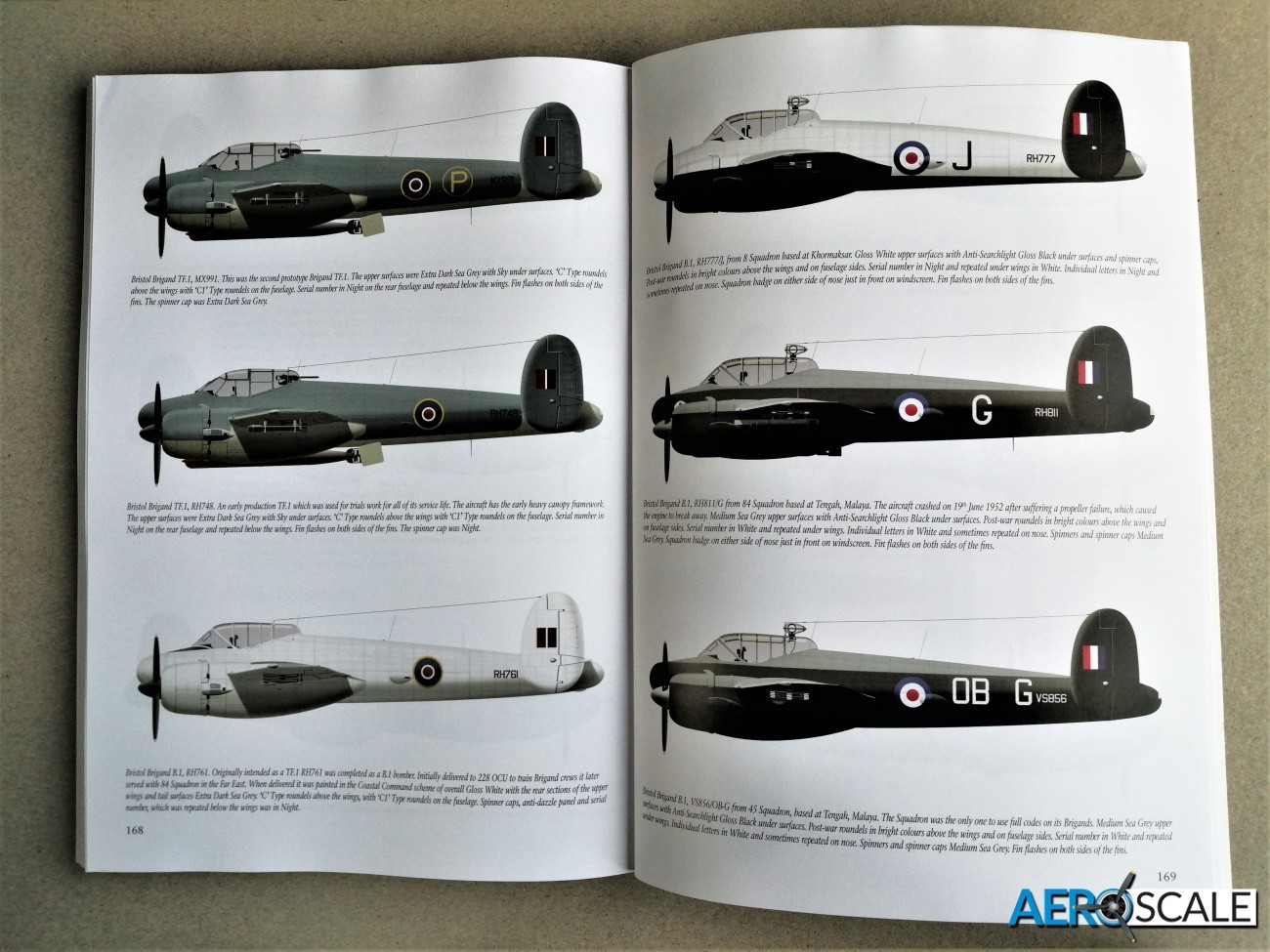 Many thanks to MMP for the review sample