Litespeed
Editor
posted on 1 month ago — updated on 1 month ago
483
views
Tim takes a look at Special Hobby’s release of the 1:72 scale Bf 109 E-1 with three marking options for the Legion Condor 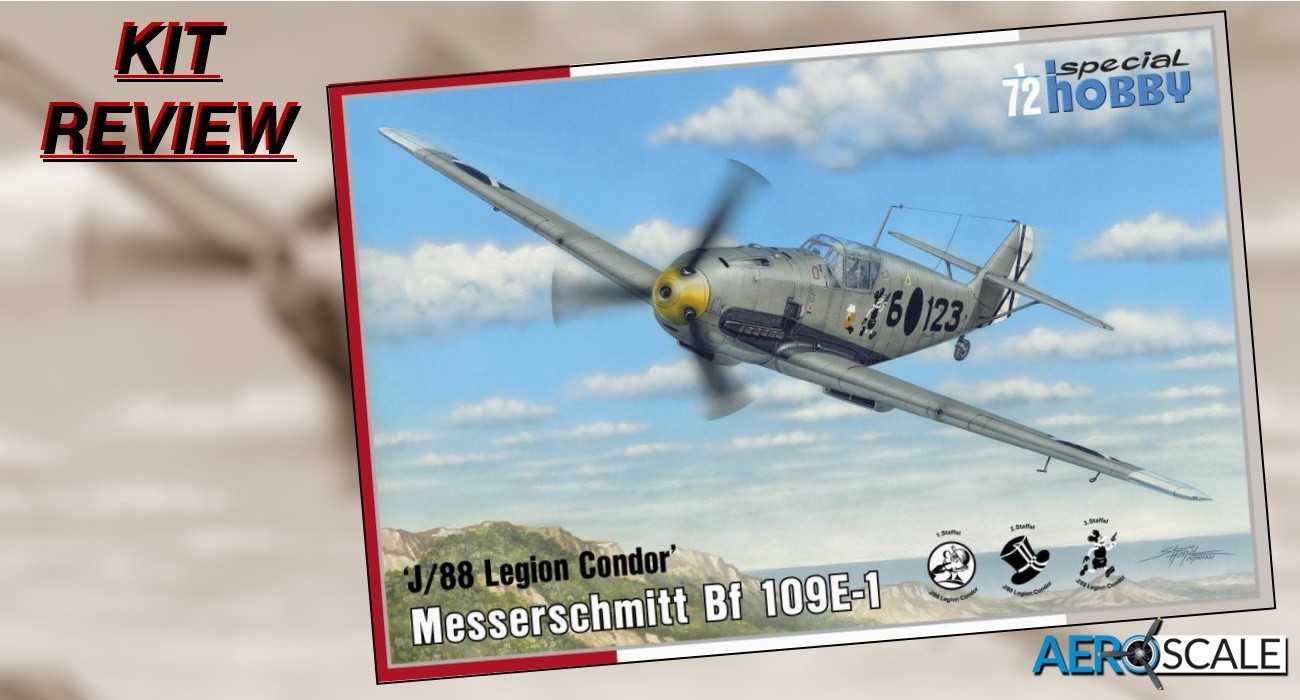 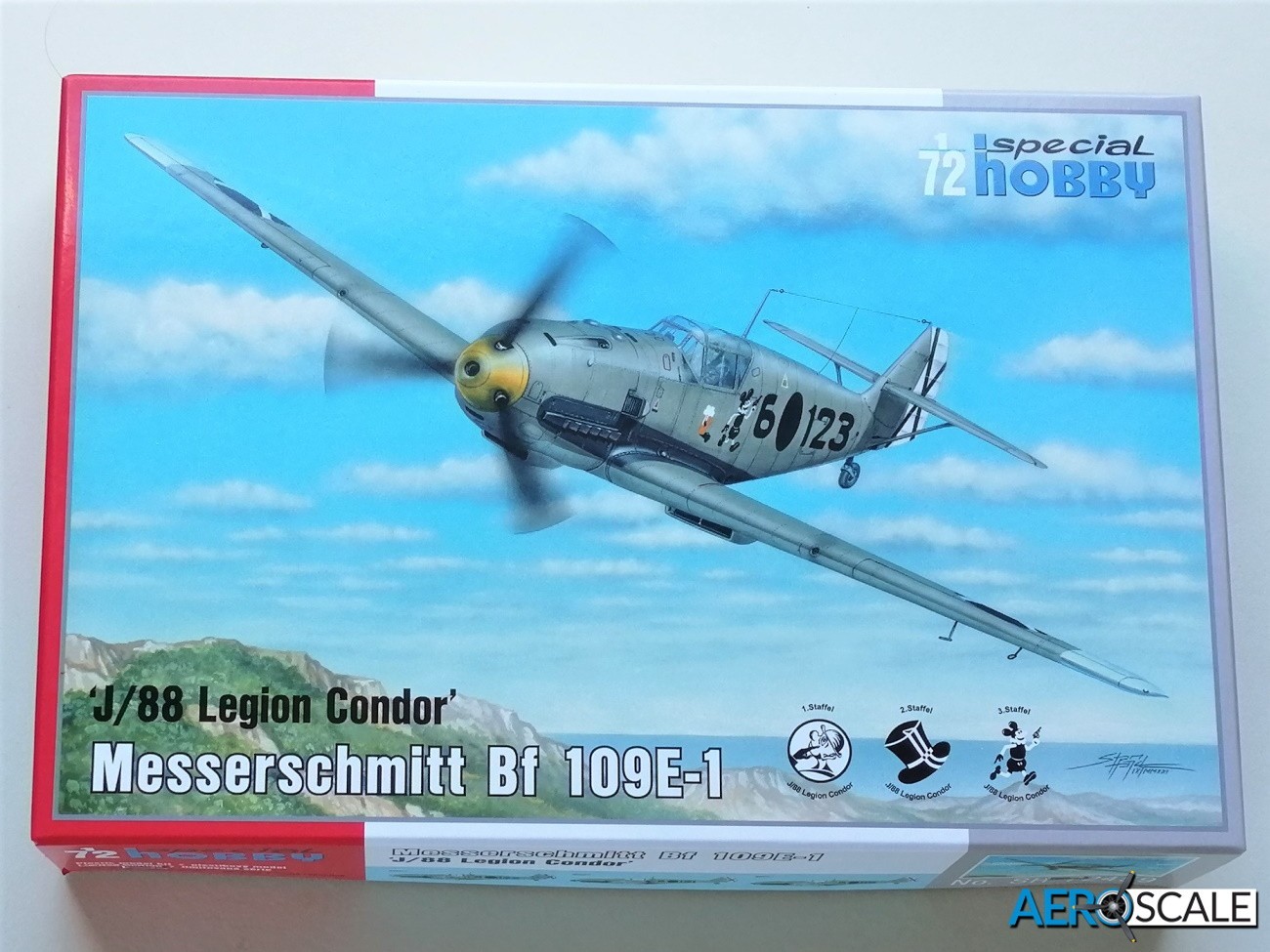 The Bf 109 E was the first major redesign of the airframe of this iconic fighter. The larger and more powerful Daimler-Benz DB 601A was fitted replacing the Jumo 210. The new powerplant required extra cooling so the radiators were relocated under the wings. The nose intake now housed the oil cooler. Two prototypes were built: V14 and V15 for the new DB engine and to test new arrangement of armament. The relocation of the radiators also had the advantage of counter balancing the larger and heavier engine and three bladed prop. To accommodate the new radiator positions under the wing, the wing had to be completely redesigned. The Bf 109 E-1 production version was armed with four 7.92 mm MG 17s two above the engine and two fitted in the wings. There were concerns about the vulnerability of all the new plumbing so the Bf 109 E-1 and as a result it was sent for evaluation to Spain with the Legion Condor during the last phase of the Civil War in December 1938. 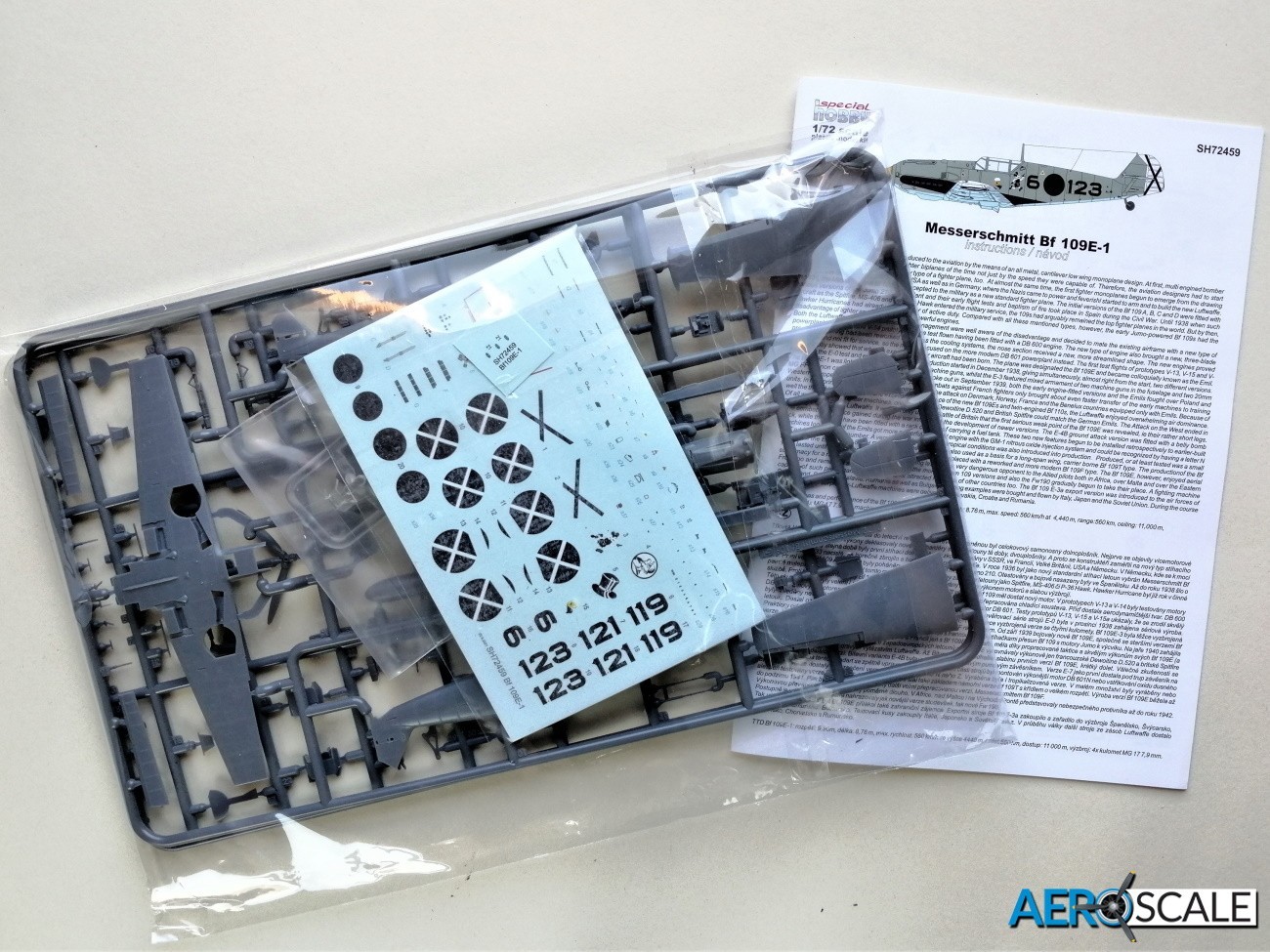 Special Hobby has plans to create a series of 1:72 scale Bf 109 E’s. They are working with Eduard to produce what will be hopefully the last word in the Emils. The first of which, the Bf 109 E-3 [SH72443] and Bf 109 E-4 [SH72439] which were released in 2020, followed this year with the ‘lightly armed Emil’ E-1 [SH72454]. This Edition: The Bf 109 E-1 has a top opening box and all the contents packed in one main bag. The decals and clear parts are packed separately within. The two sprues have quite a few parts that are not used with this particularly release. Recessed and raised detail looks superb overall particularly the panel lines and rivets. There is a little bit of flash here and there and the odd sink mark. Thankfully the two minor sink holes will be out of sight. 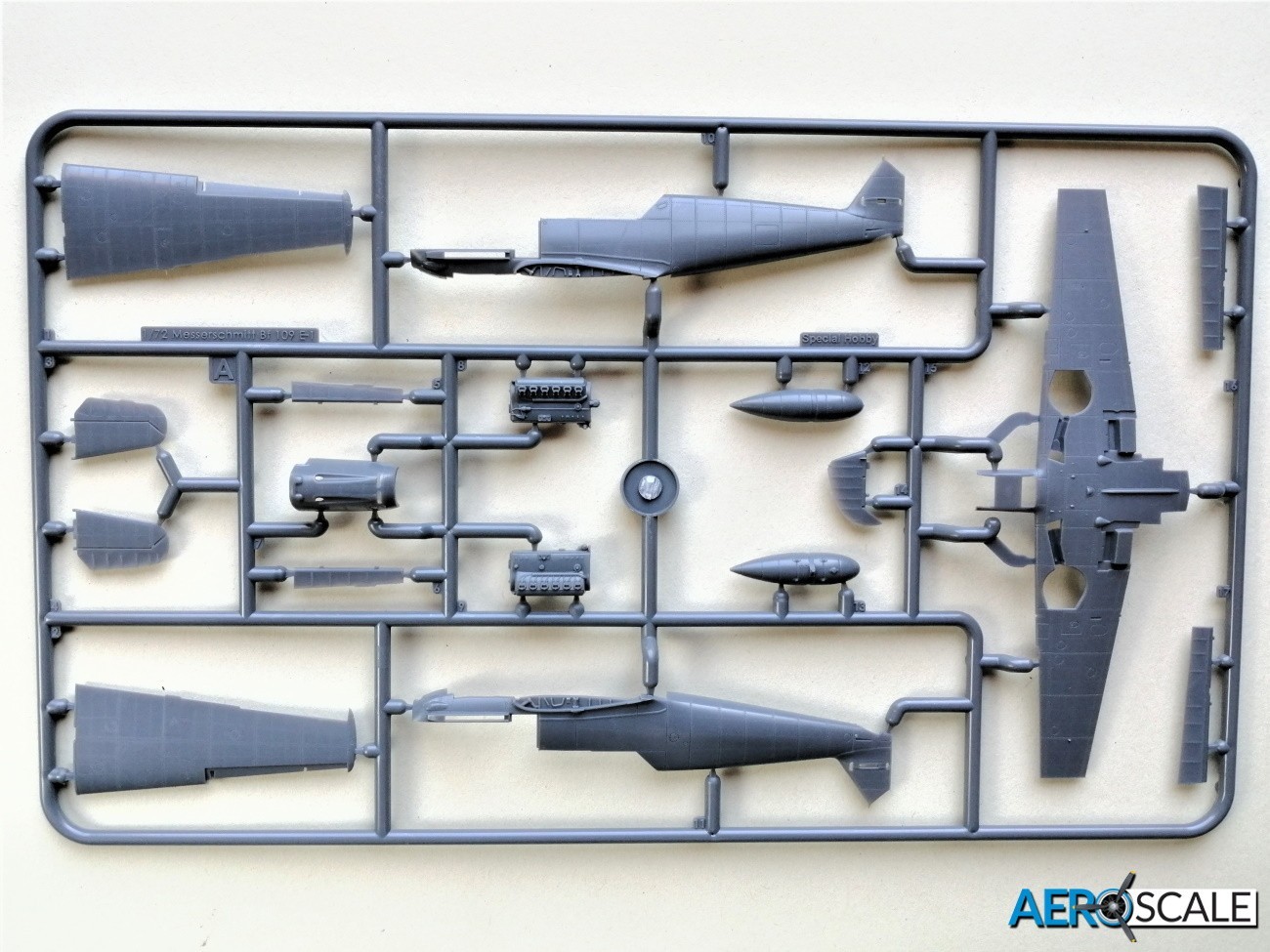 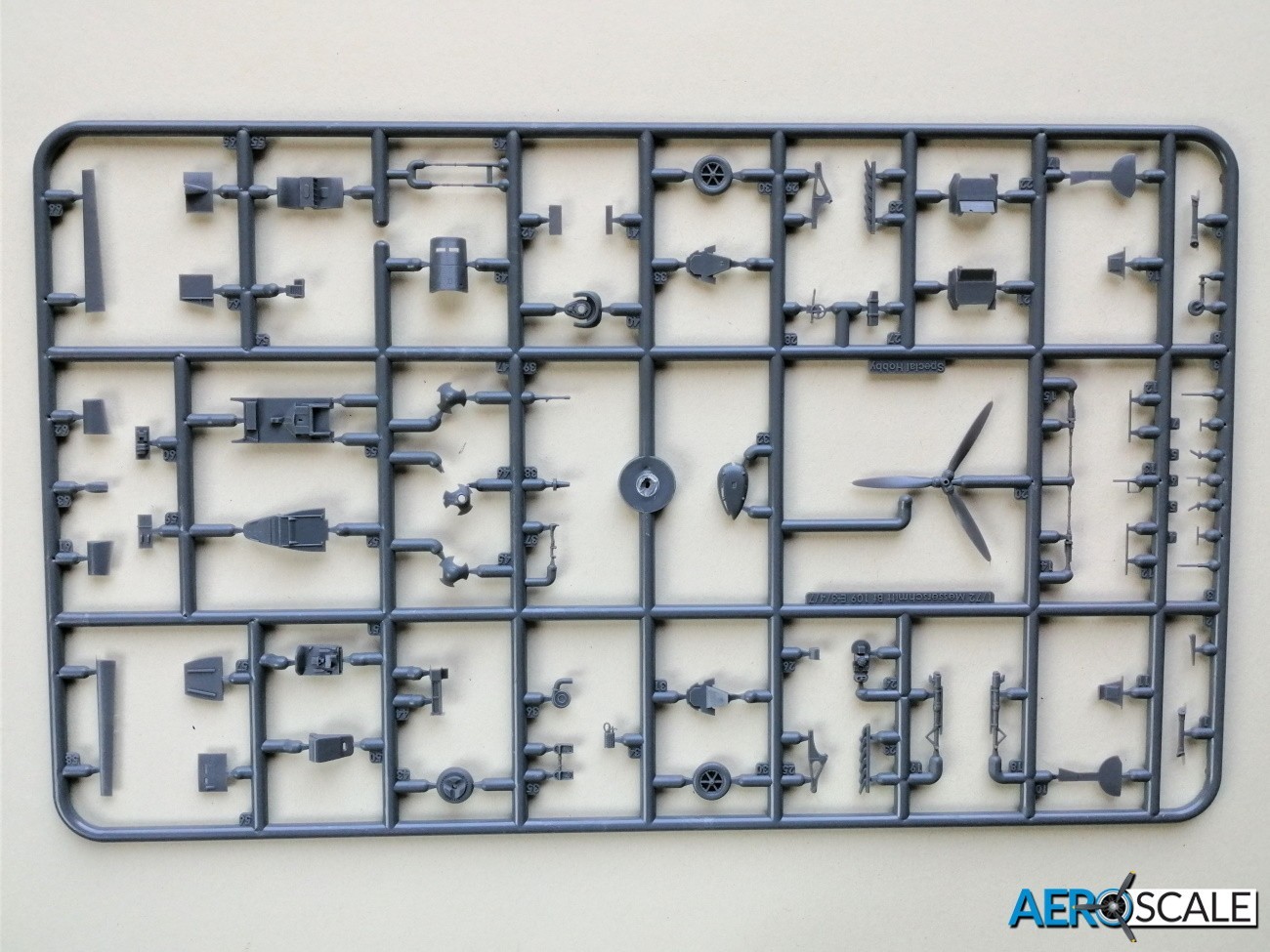 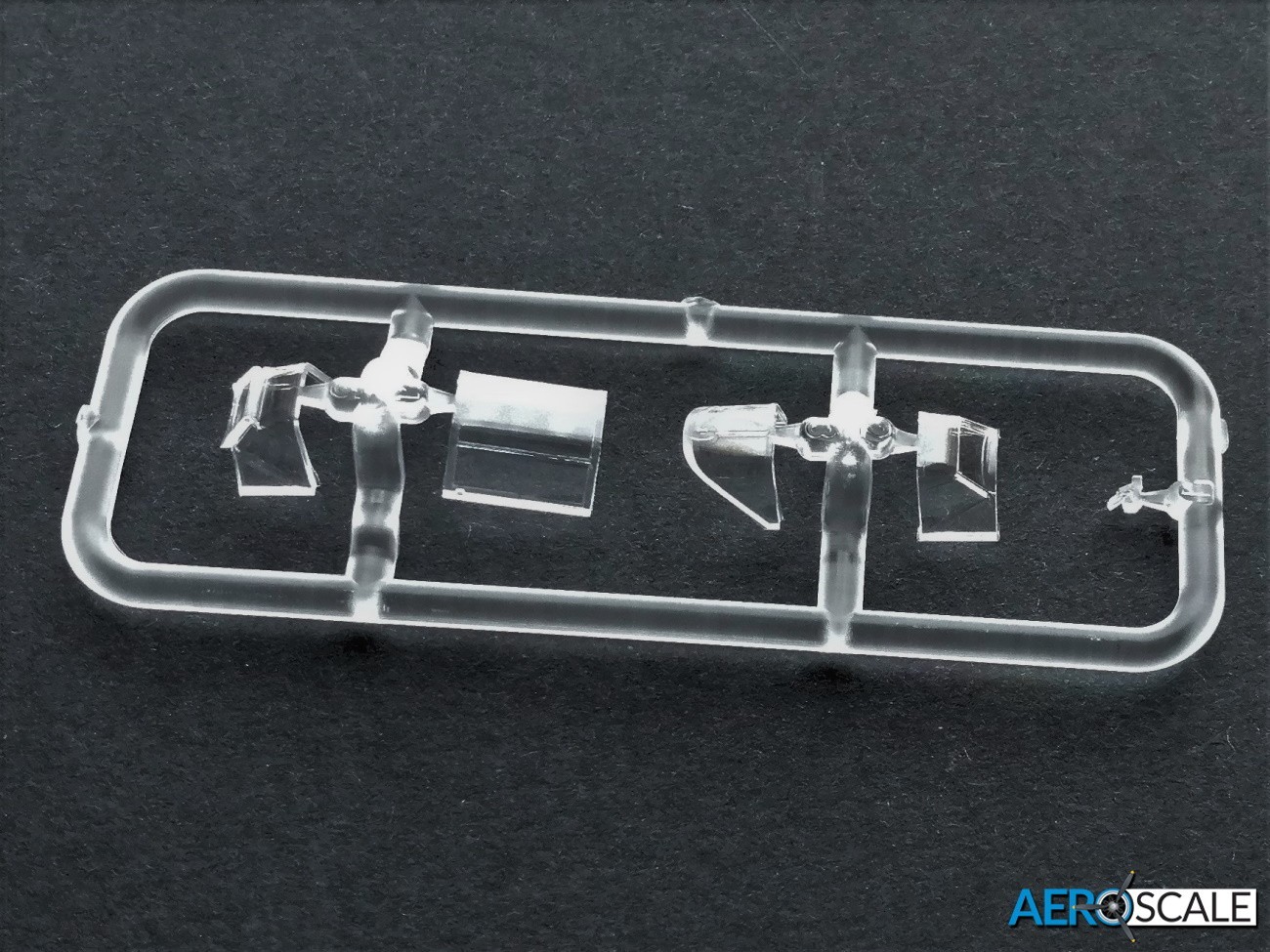 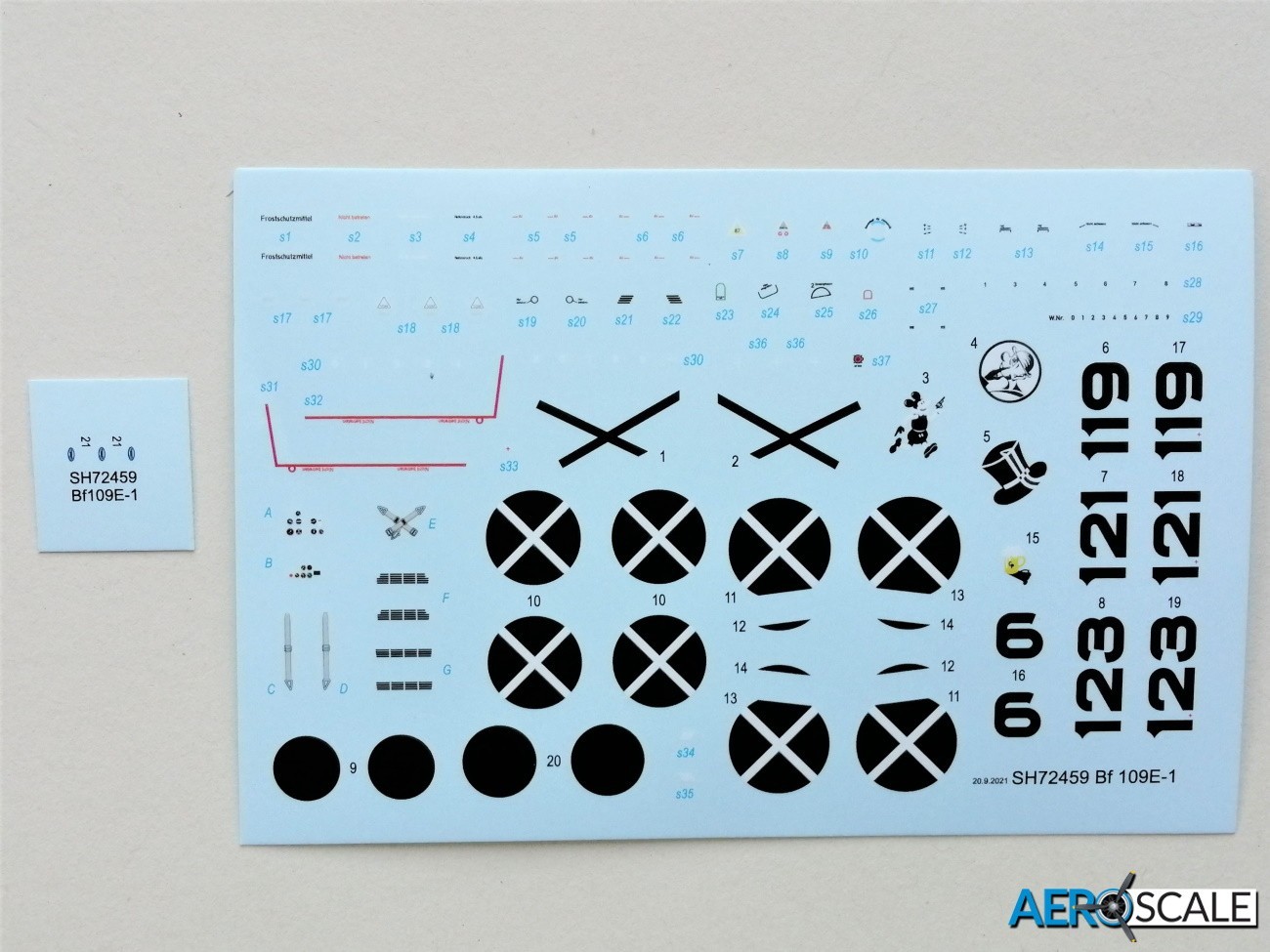 The cockpit is made up from around thirteen plastic parts, one clear part for the Revi gunsight and decals for the seat harness and instruments faces for the instrument panel. Detail is really nicely done and there is further raised detail on the inner fuselage walls. Separate detailed parts include bucket seat, rudder pedals, control stick, trim wheel, seat adjustment handle, oxygen supply, 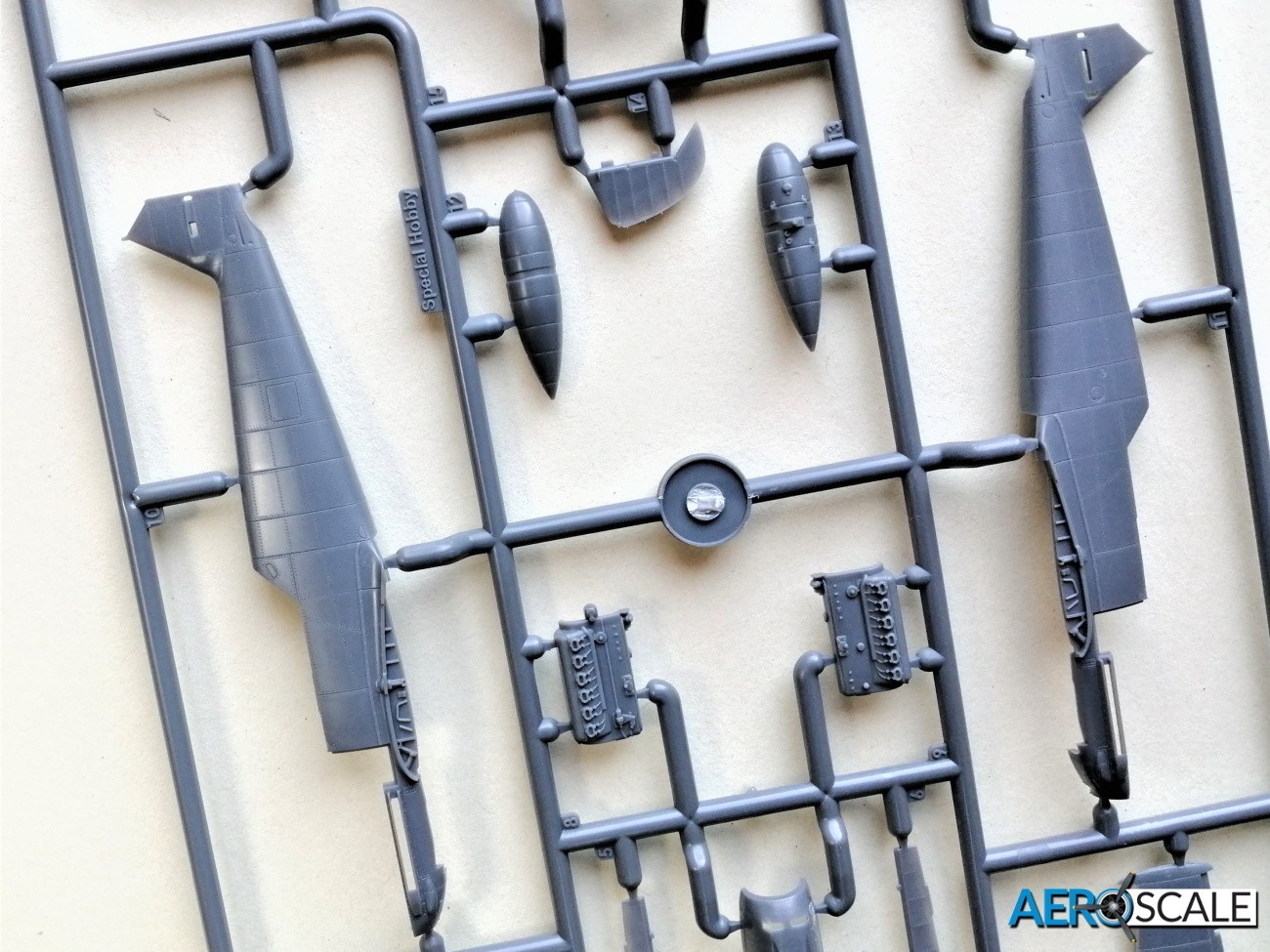 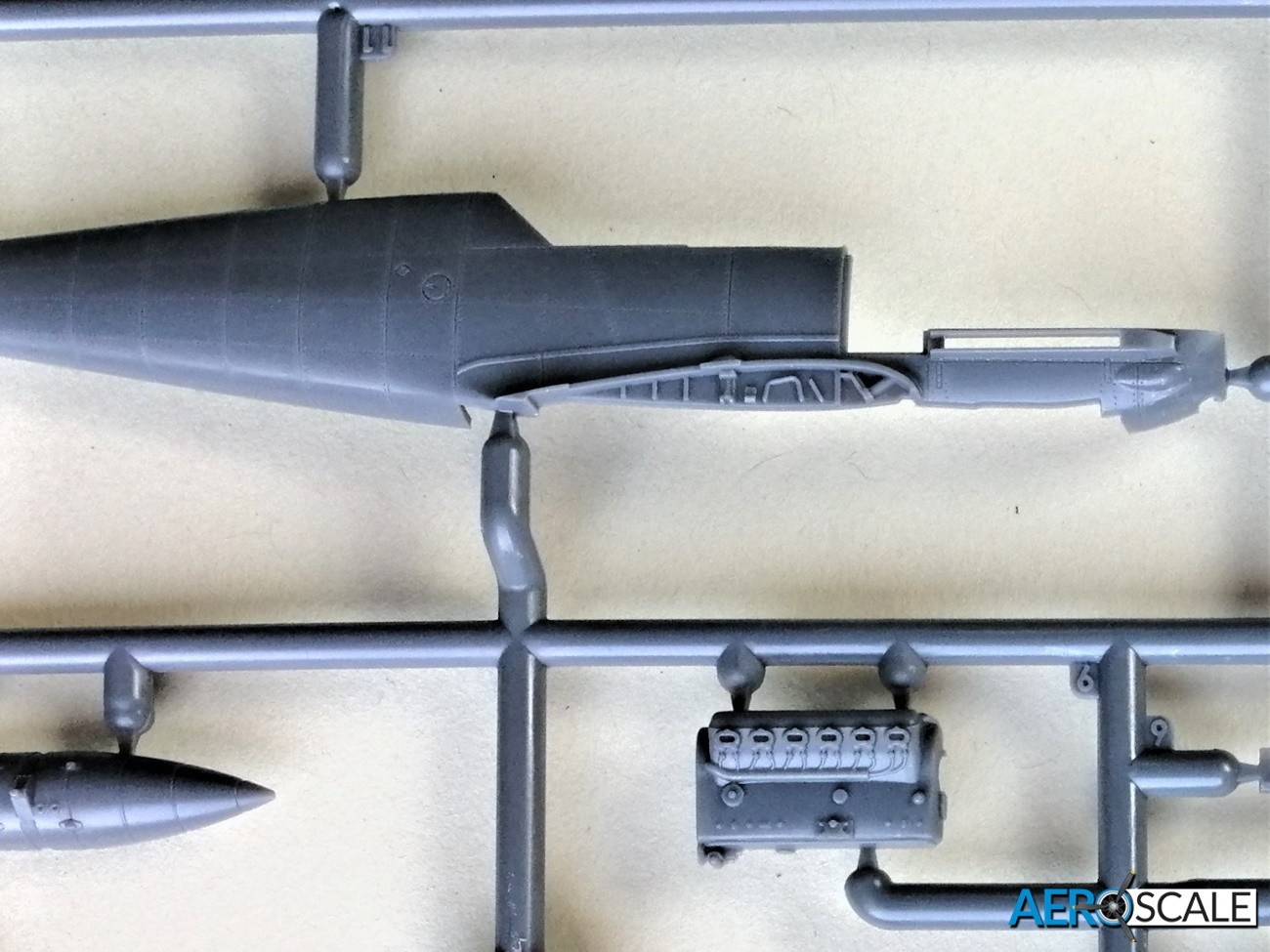 The canopy is built up from three parts all are crystal clear. The windscreen for the E-1 is the one without the armour. The canopy can be displayed open, while rear fixed part of the canopy has the aerial mast to attach to it. 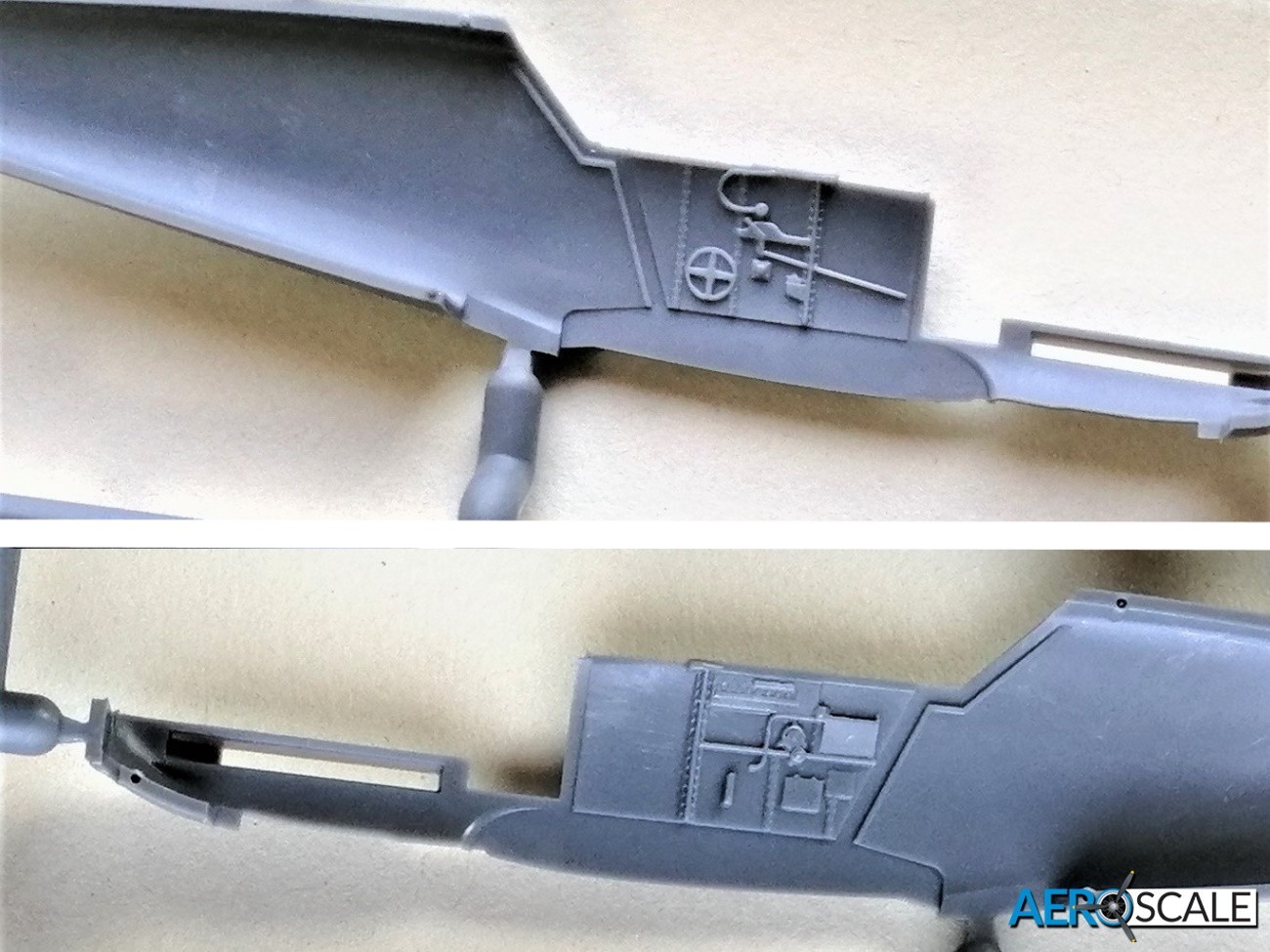 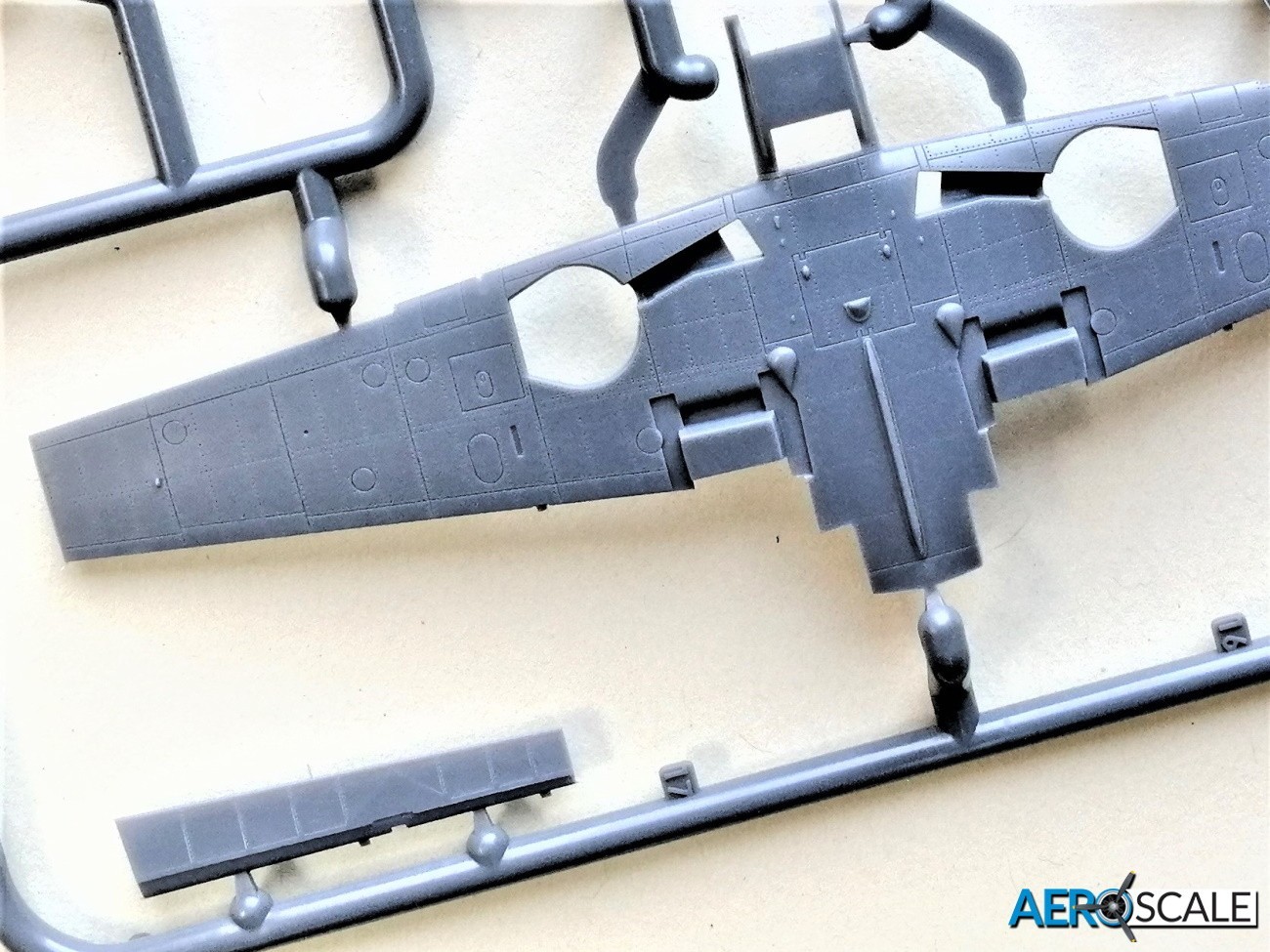 In the nose there are the two 7.92 mm MG 17s to fit. There are two versions of the MG’s to choose from: the full length highly detailed pair that includes the breech blocks for use if you want to display the bay open. Or the pair of highly detailed gun barrels lacking the breeches if you are not wanting to display the hatch off. The detail includes ammunition belt chutes and braces for the barrels. 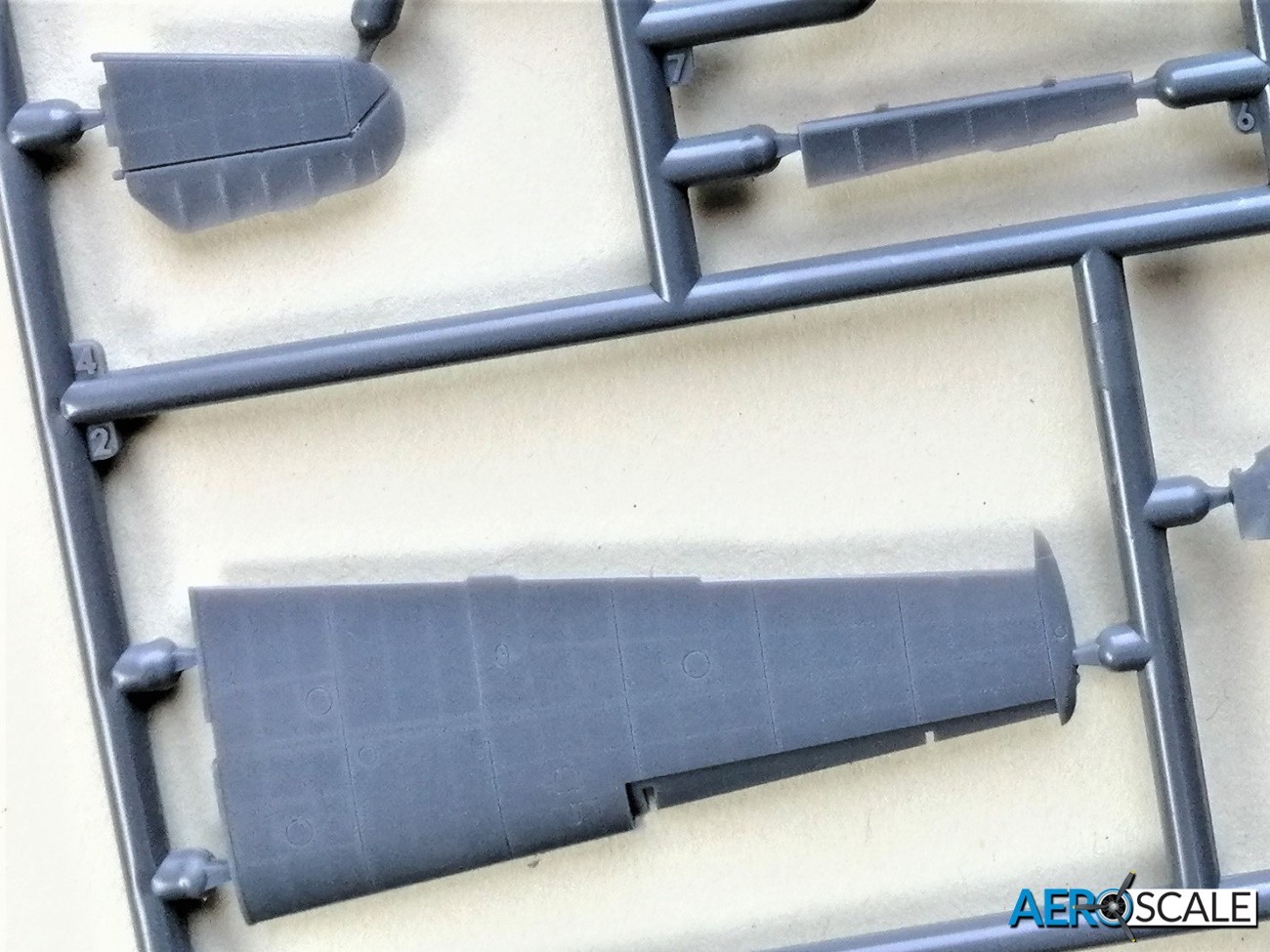 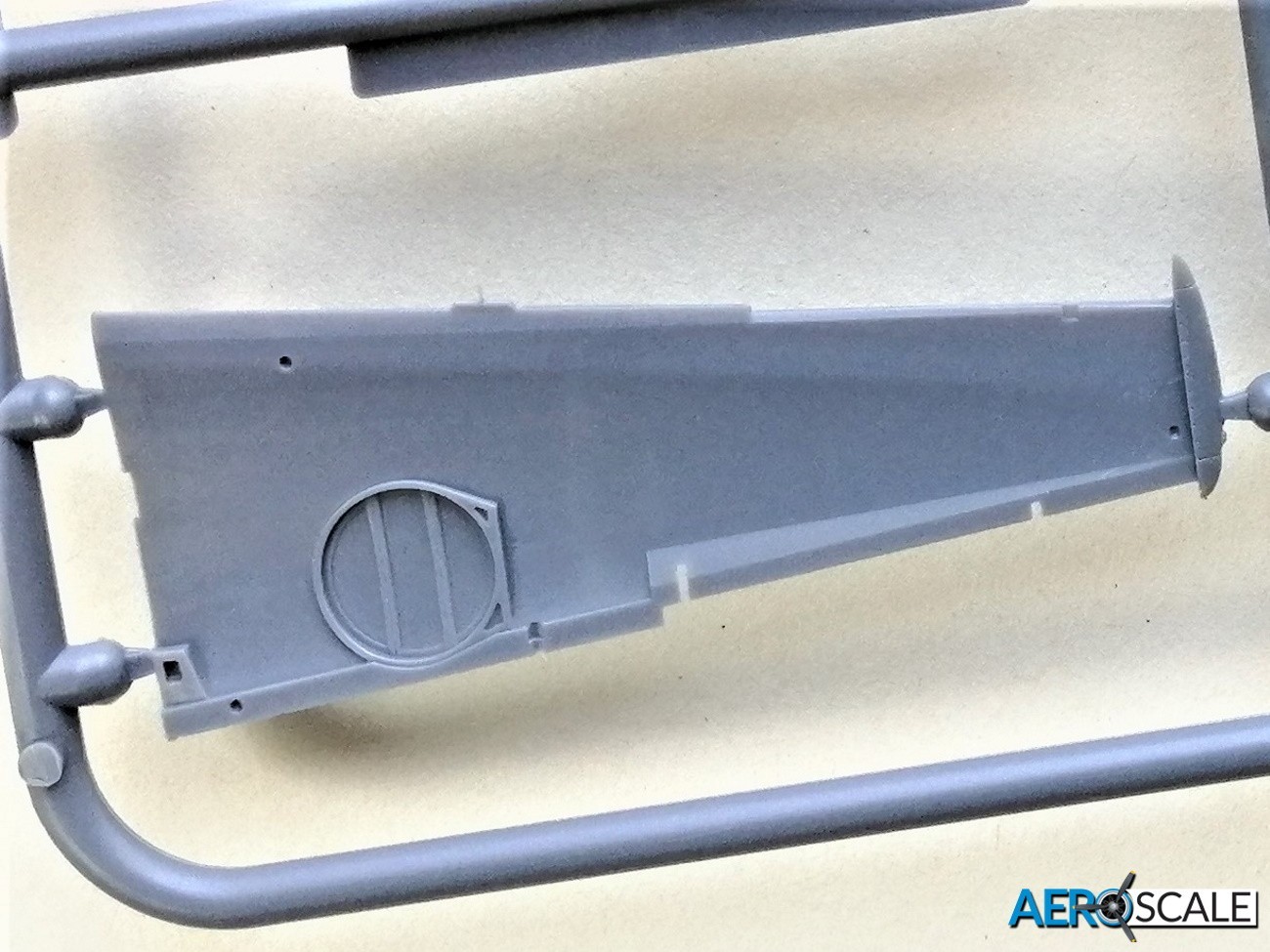 The engine is something of a gem and begs to be displayed. The DB 601 is made up from six plastic parts and there are a couple of engine bearers as well. Along with the cockpit definitely worth highlighting and weathering the superb detail. There are even decals with the engine block number, though the instructions advice you to check your references for authentic block numbers. The inlet for the supercharger is separate and one of the surplus parts looks like a sand filter. So expect a tropicalised version of the Bf 109 E in the future. There is an even more detailed resin engine available from CMK [7455]. There are four panels that can be left off to display the engine and fuselage armament in the nose. Of course, if you don’t want to display them, you can glue the panels in place. The three-blade prop is one piece with separate boss. The  rib detail at the wing root looks very good, buts its a puzzle why its there. It disappears once the wing is joined to the fuselage. 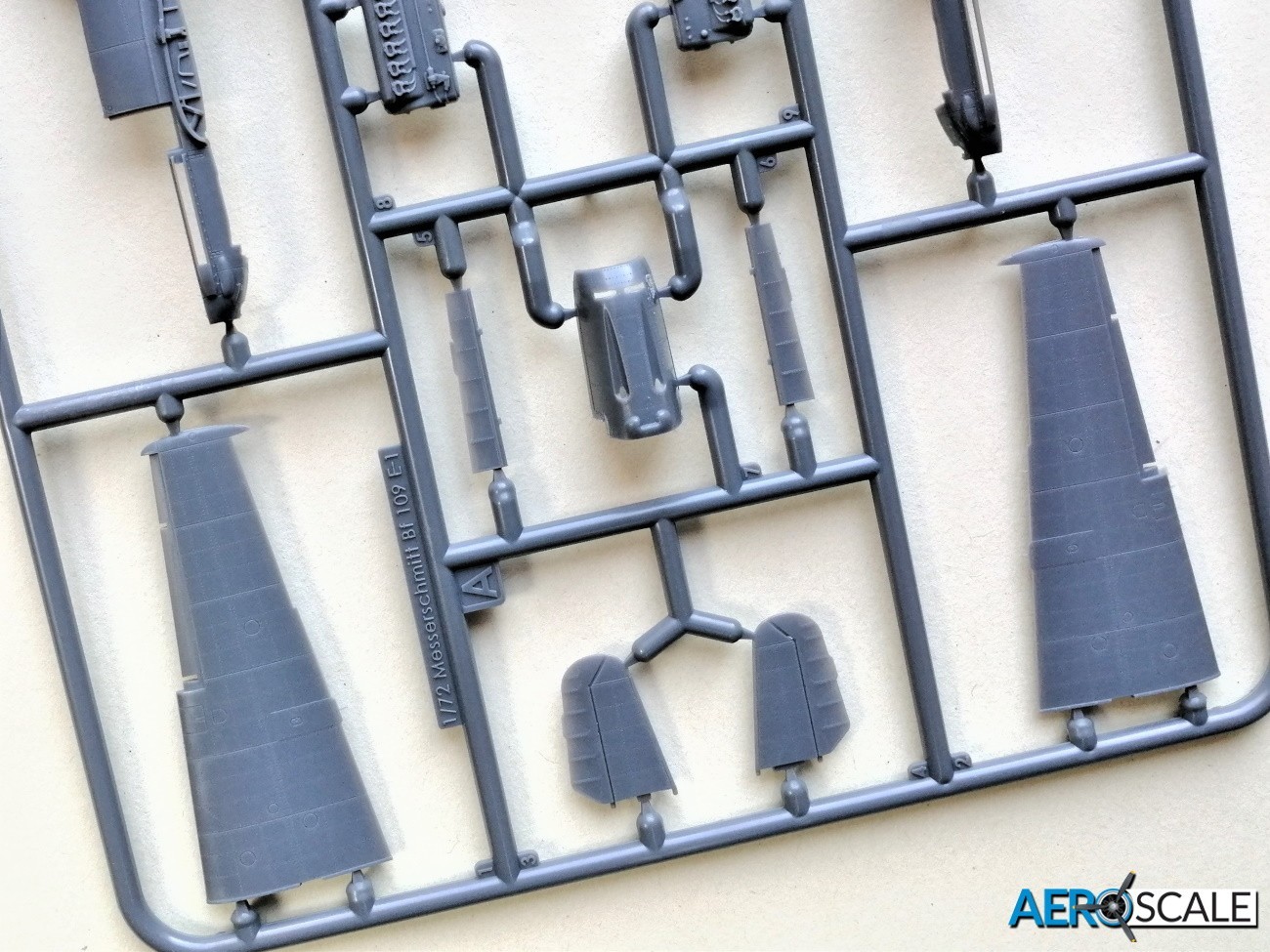 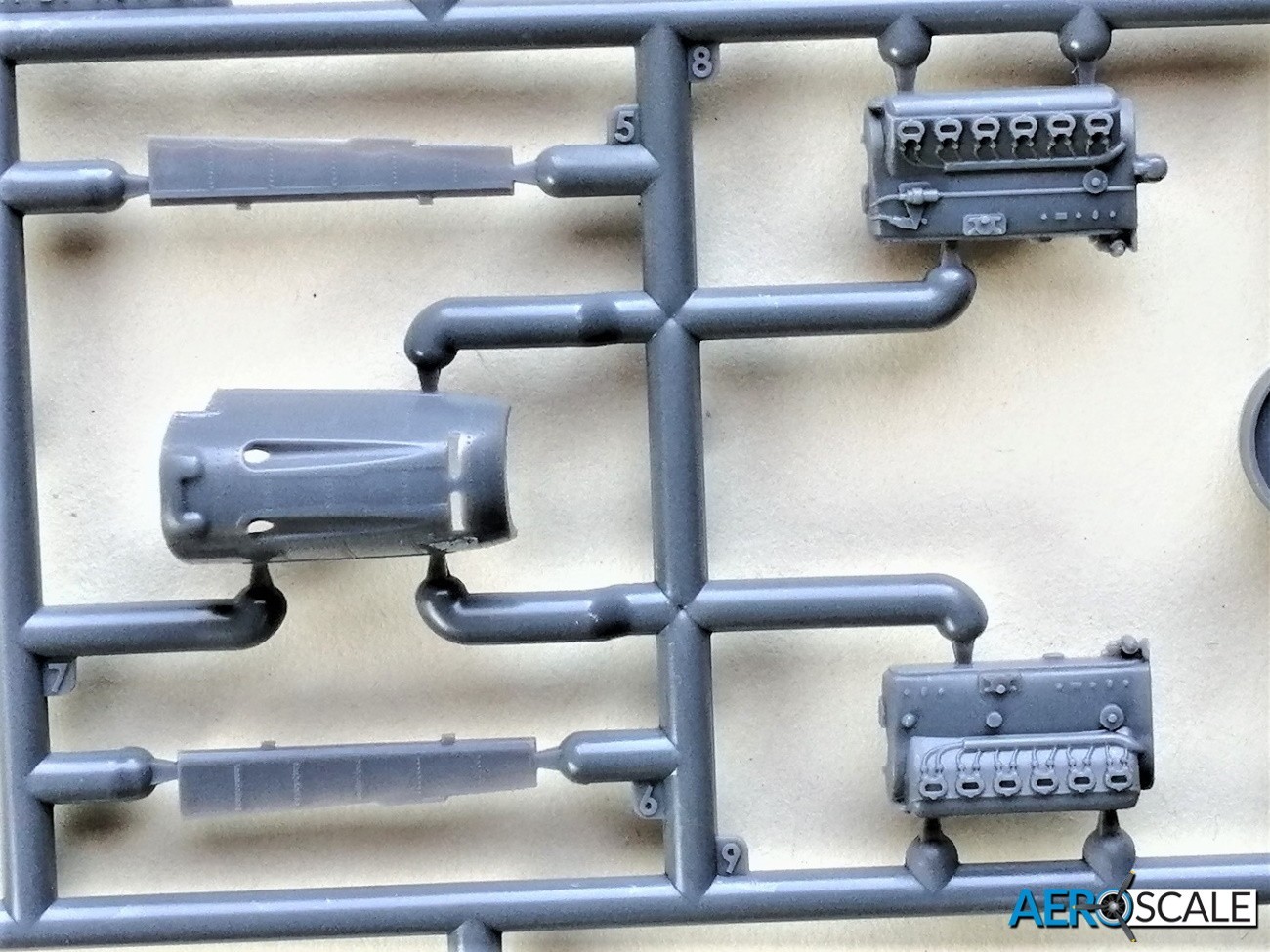 The wing includes a one-piece lower surface with the dihedral set. The slats, ailerons and flaps are all separate. The trailing edges of the control surfaces are wonderfully thin, so much so that they are translucent. There are very fine pieces of plastic similar to static wicks on modern aircraft attached to the trailing edges. I was a little concerned just how delicate they are, but I think they are just fine run offs for the molten plastic. The frames for the fabric covered control look very good, if a tad over emphasised in this scale. The undercarriage bay walls are moulded into the lower wing and there is well defined detail in the roof of the wheel bay. The under-wing radiator boxes are one piece with the rear doors moulded open. 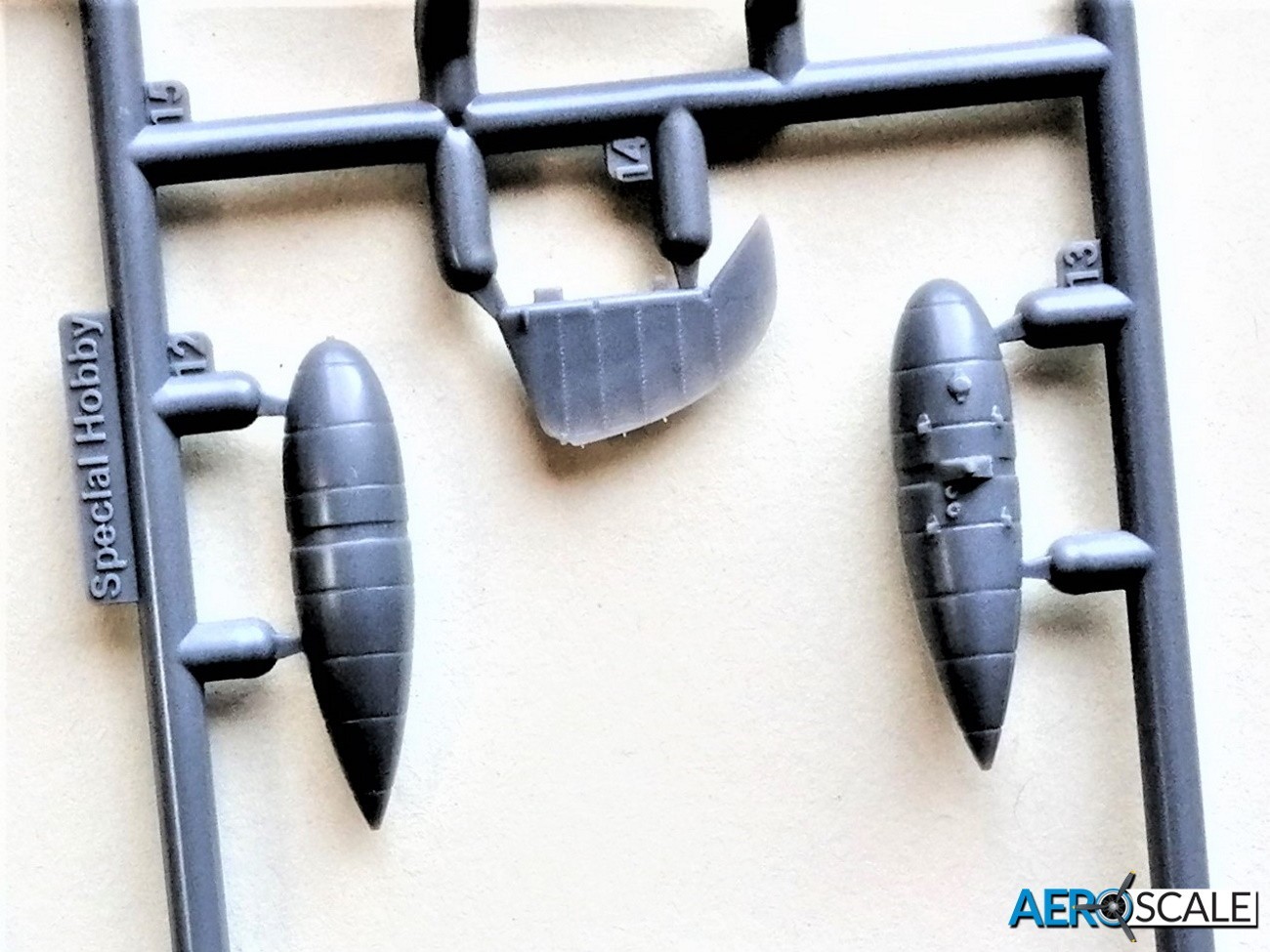 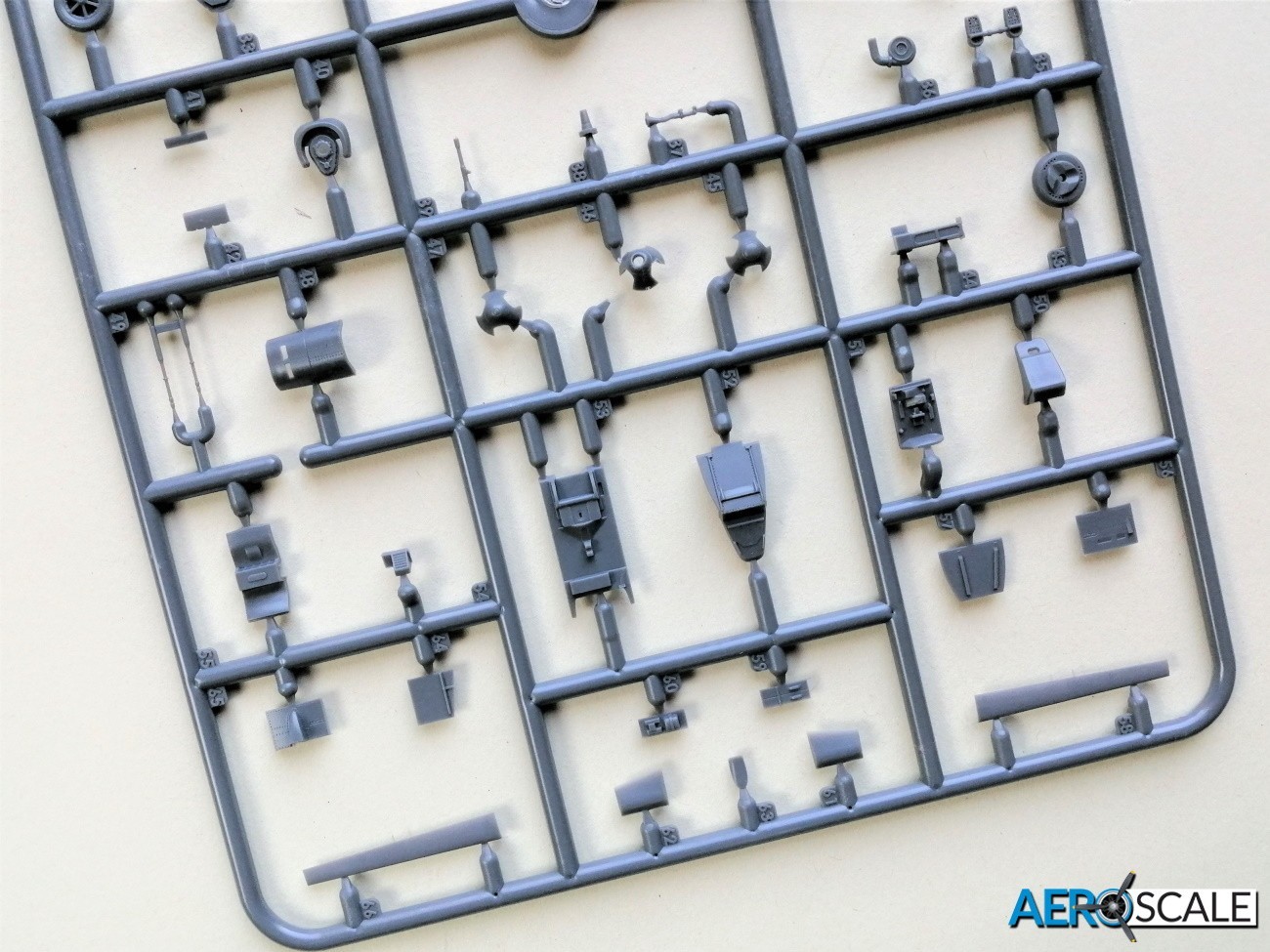 The main wheels are one piece and they have superb detail on them. As do the undercarriage doors and oleos. There a very useful diagram showing the set of the main undercarriage in the down position. 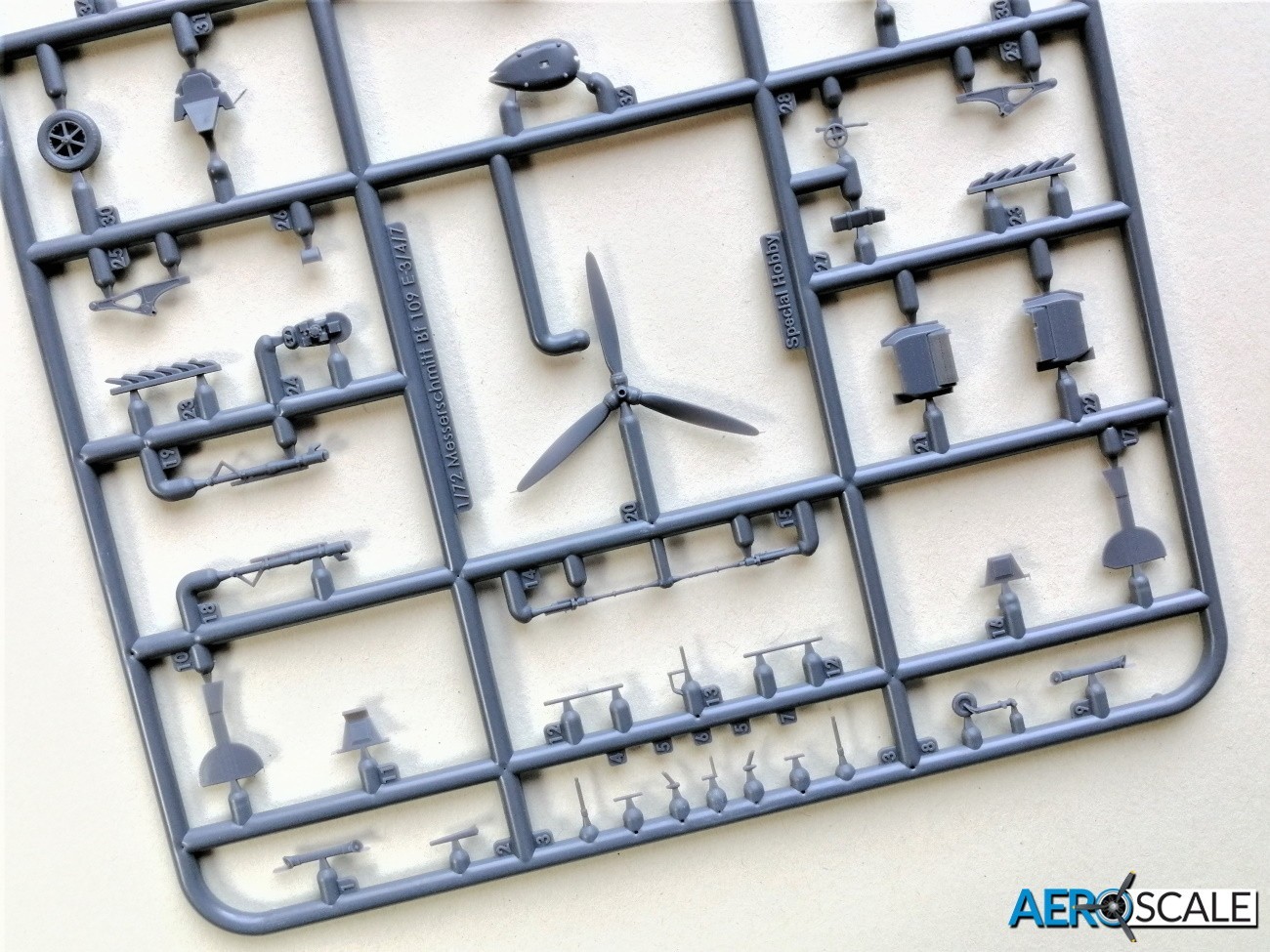 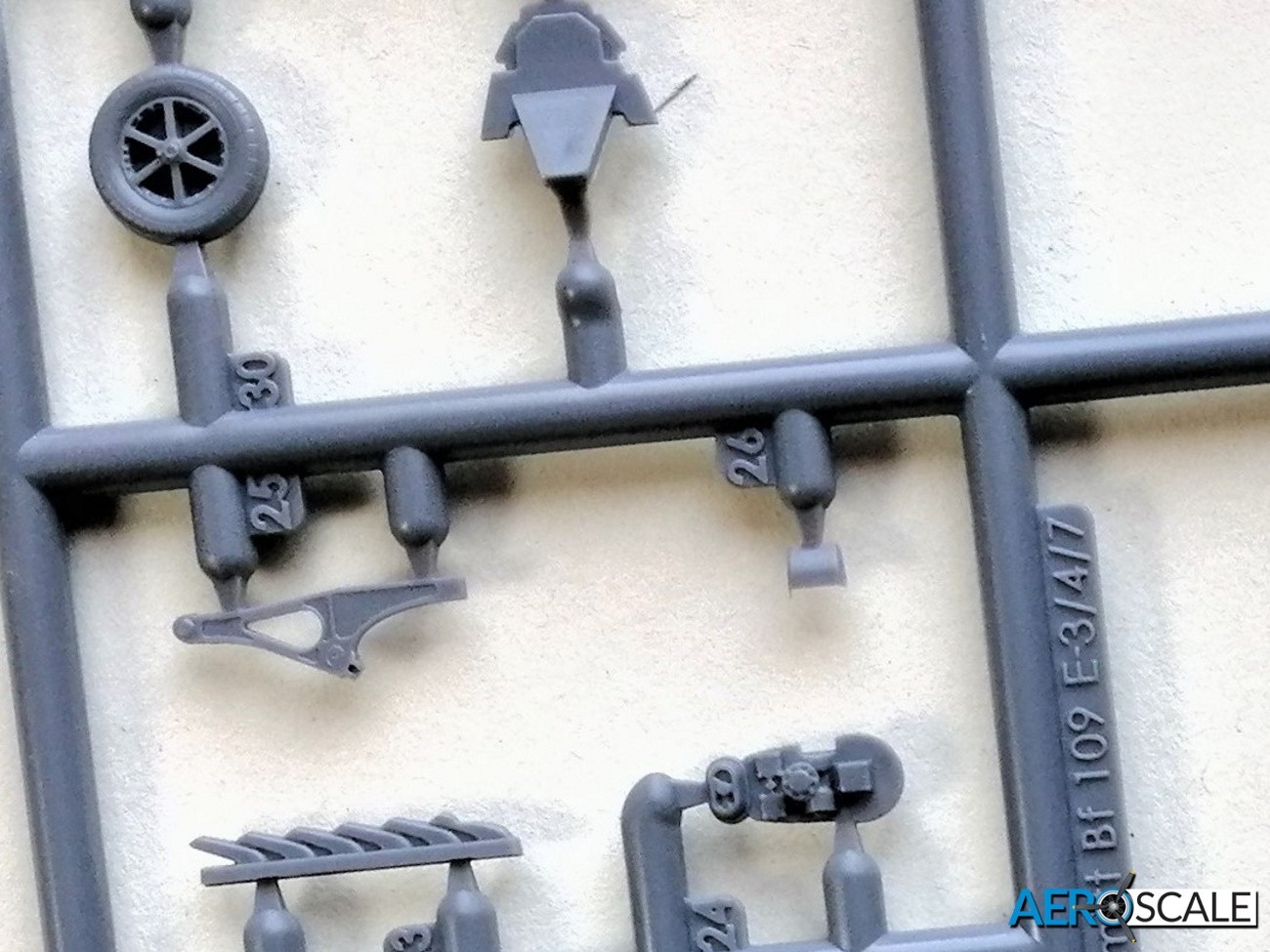 The horizontal tail surfaces are both one piece as is the rudder. The tail wheel and oleo are one piece and have four point locating pins to ensure its set at the correct angle. To finish off there are tailplane anti flutter braces, horn balances, pitot and even an engine starting handle to add. 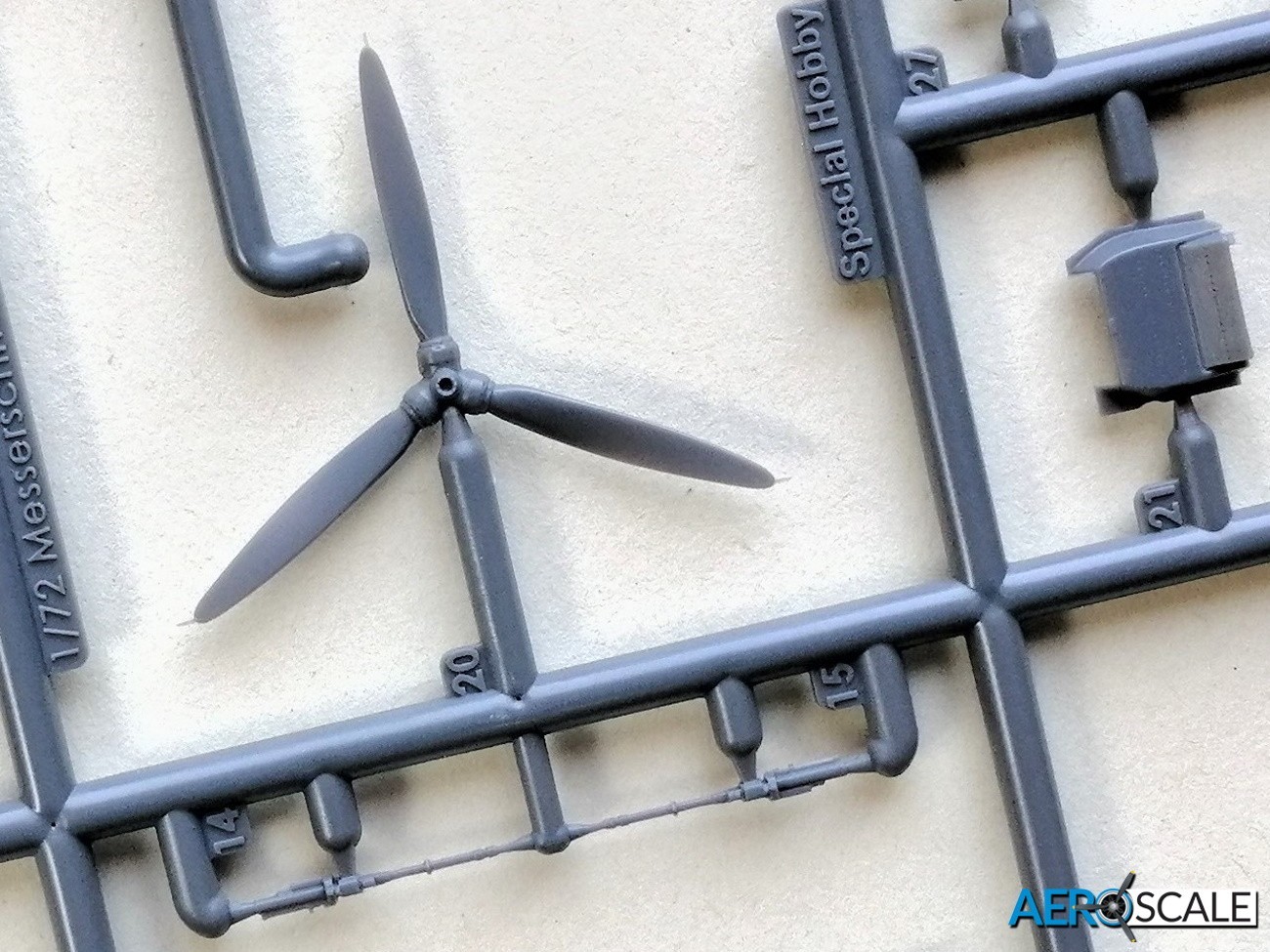 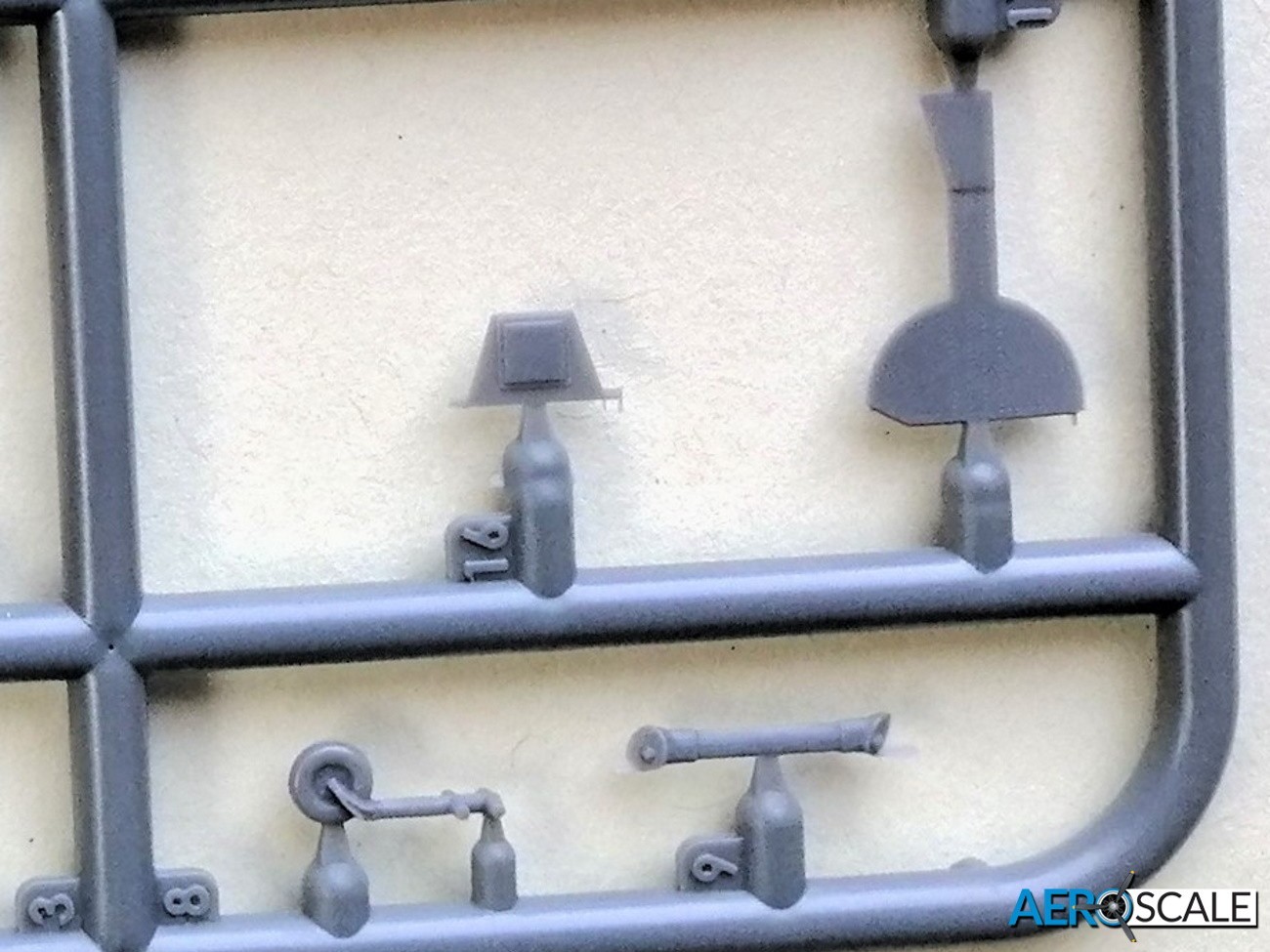 The decals look superbly printed and there are quite a few stencils to add. They are so comprehensive there’s even the tailplane angle gauge include. There is a small supplement sheet providing the stencil visible when the flaps are dropped. A nice touch are the underwing roundels that are two-part as they span the gap between the aileron and wing. 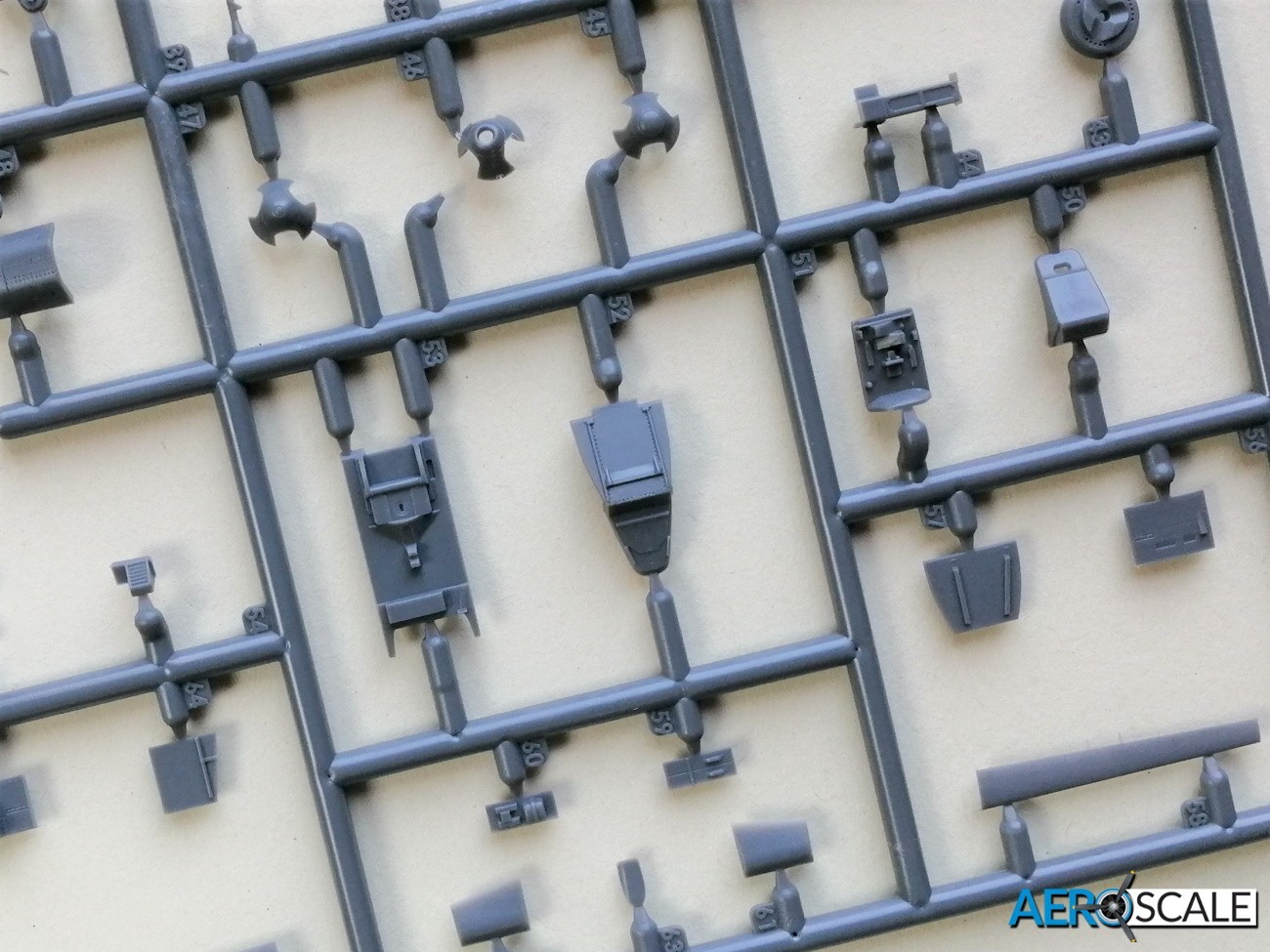 The twelve-page A5 formatted instruction booklet is in colour and has excellent drawings to aid with the construction. The scrap drawings providing additional detail are very useful. Paint schemes provide four view diagrams although the schemes are far from complex. 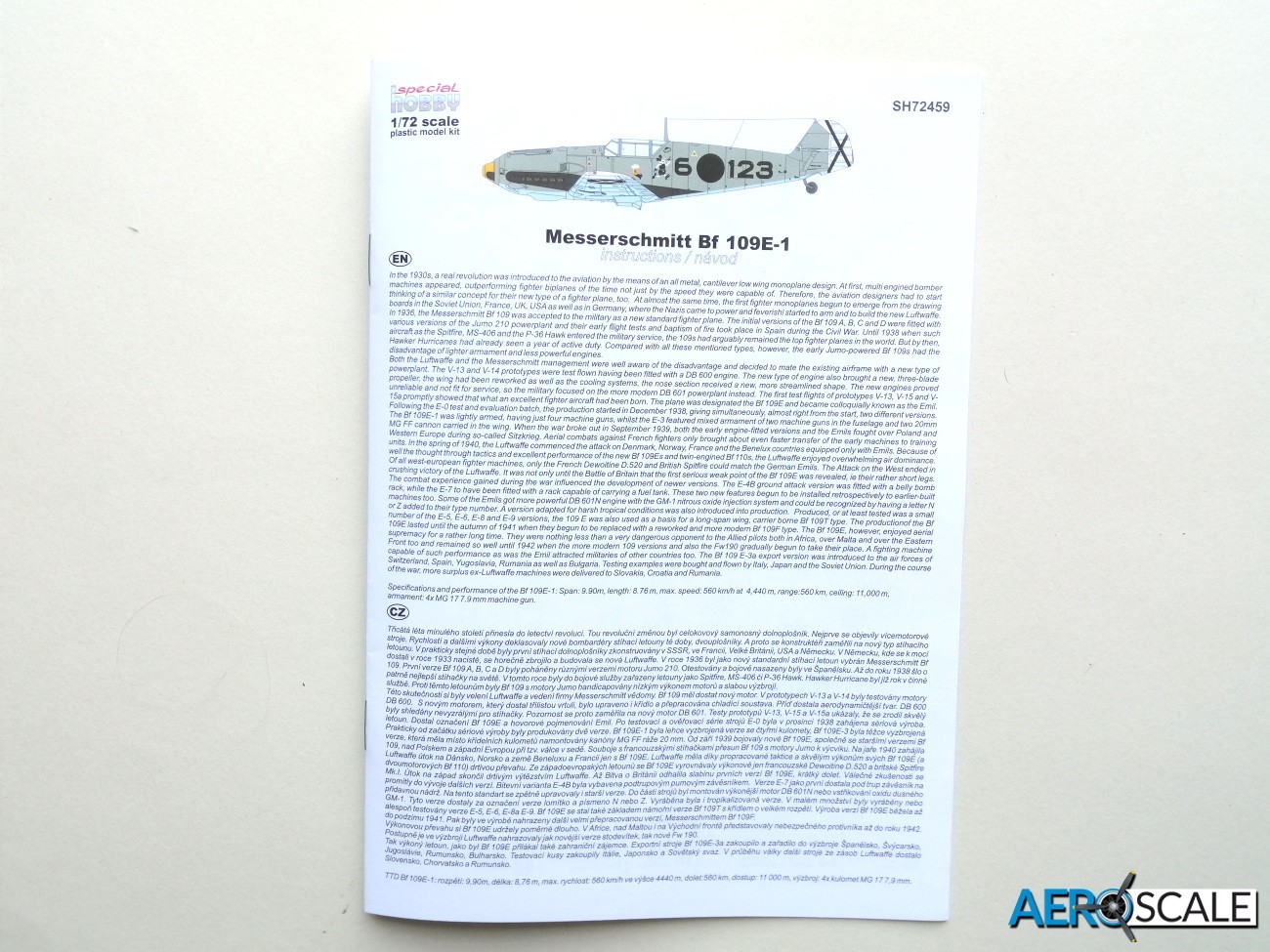 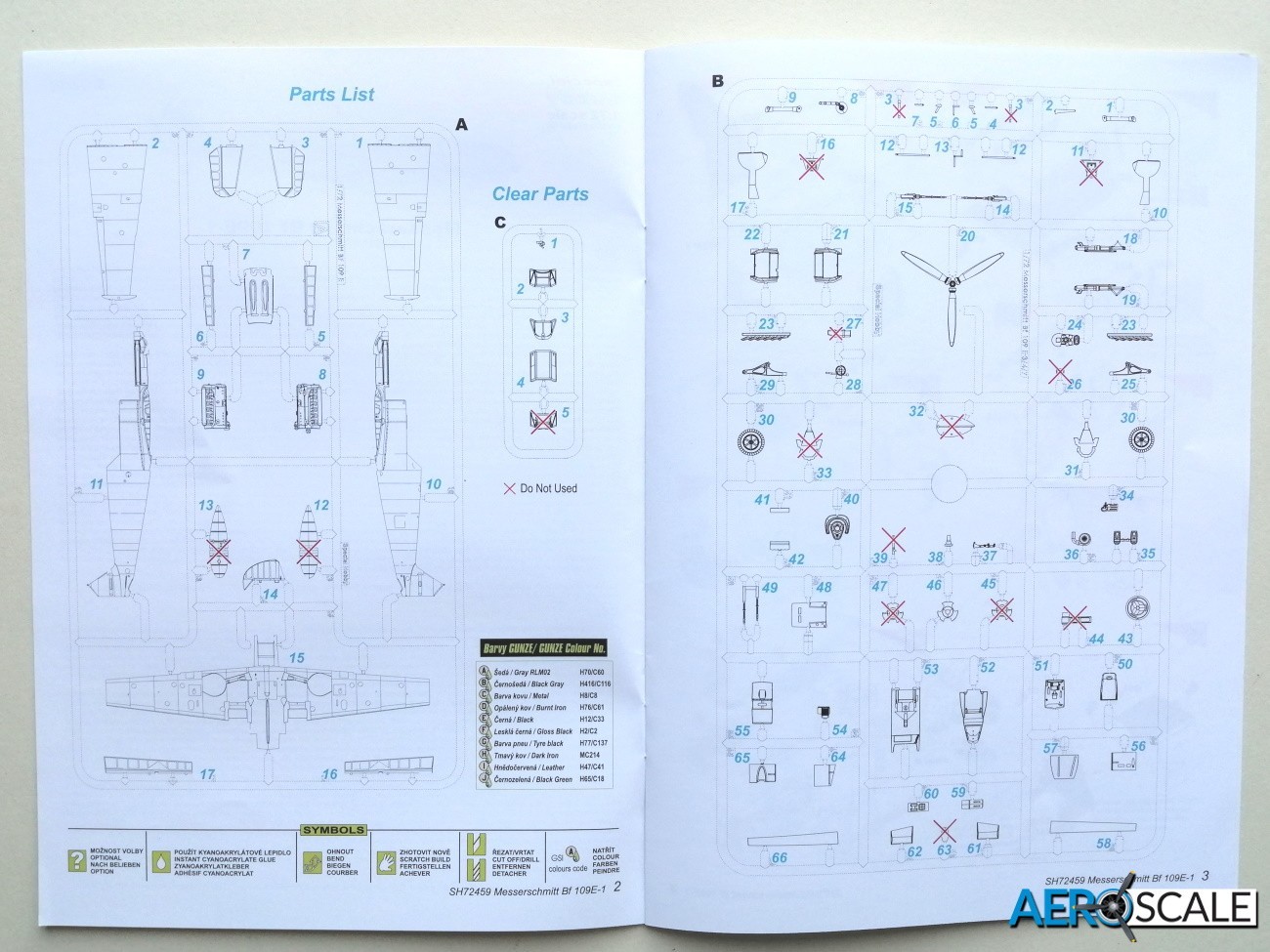 There are three marking options:

All three aircraft have upper surfaces and sides painted RLM 02 with under surfaces of RLM 065. There is a black stripe extending from just forward of the exhaust back just beyond the leading edge that needs masking. Wing tips and rudder are painted white.

Colour reference use Gunze Sangyo paints along with the relevant RLM numbers. 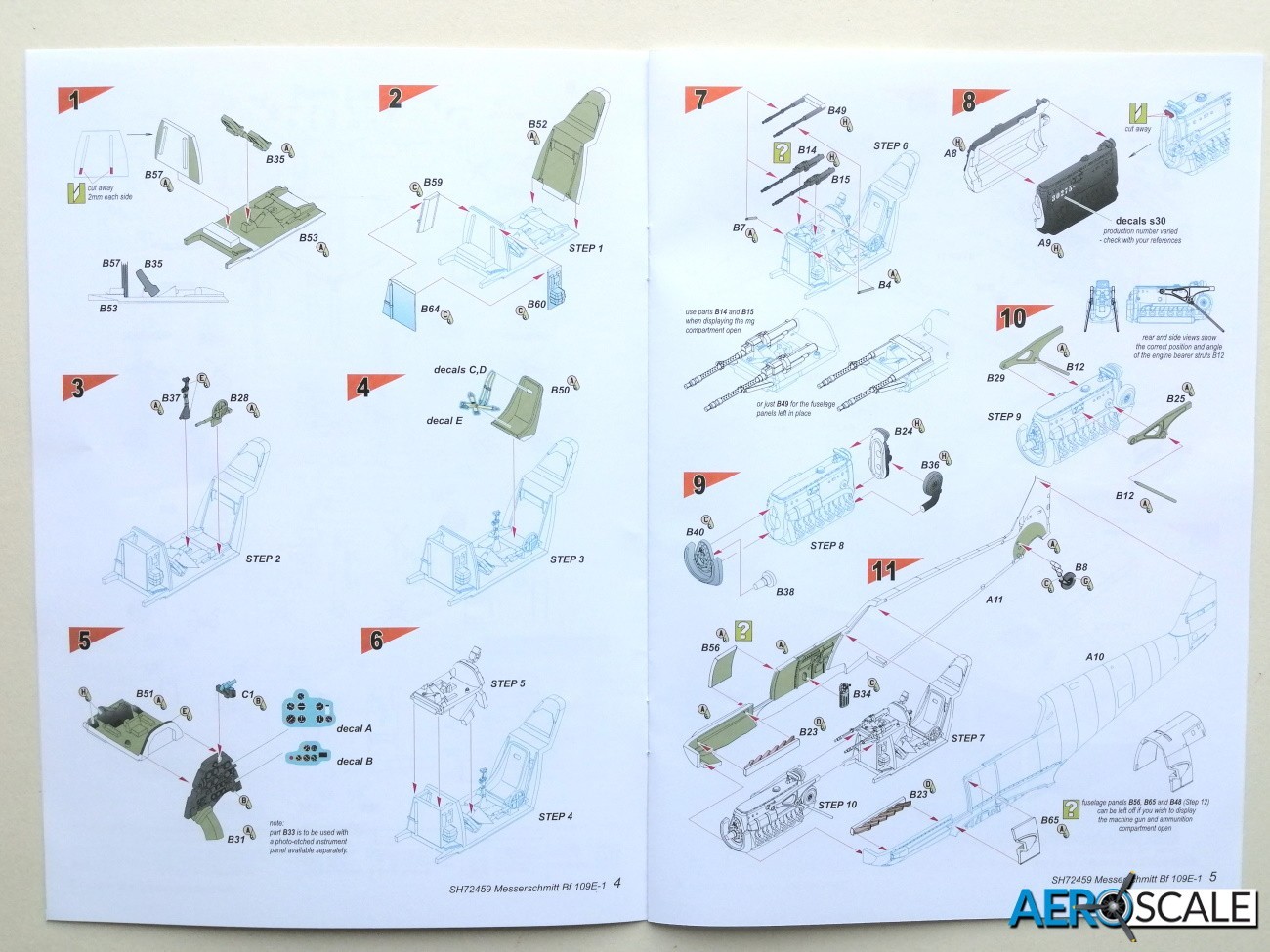 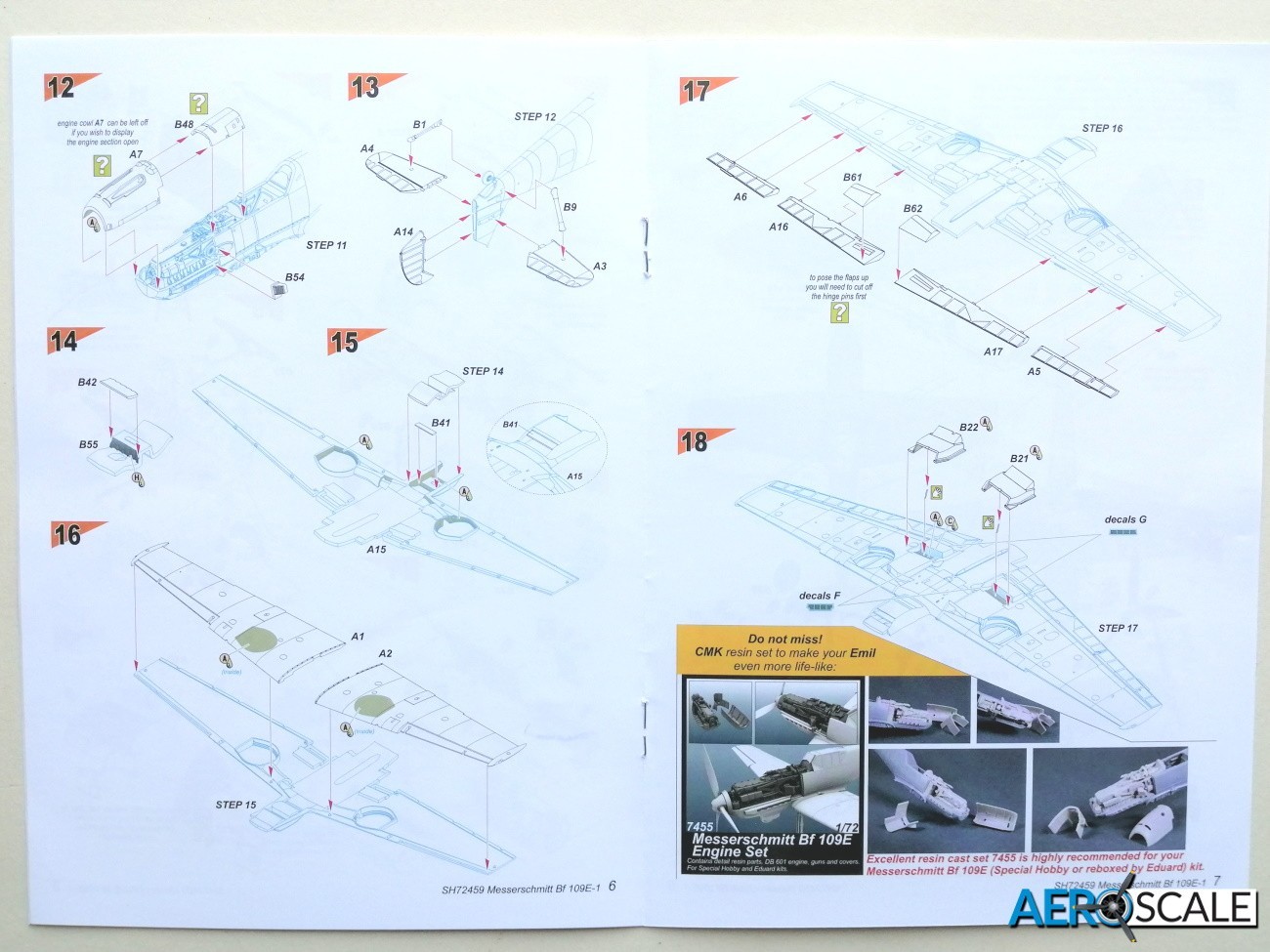 Special Hobby in collaboration with Eduard has set an extremely high bar with these new tool Emils. The planning, design and execution of this release is jaw dropping particularly as its in 1:72 scale. Its great to witness two great kit manufactures collaborating in this way and putting a smile on the modellers face. Highly recommended

Many thanks to Special Hobby for the review sample and to Rowan for passing it on to me. Rowan built the Bf 109 E-4 and you can find his excellent build log here: https://forums.kitmaker.net/t/special-hobby-1-72-messerschmitt-bf-109e-4/3047 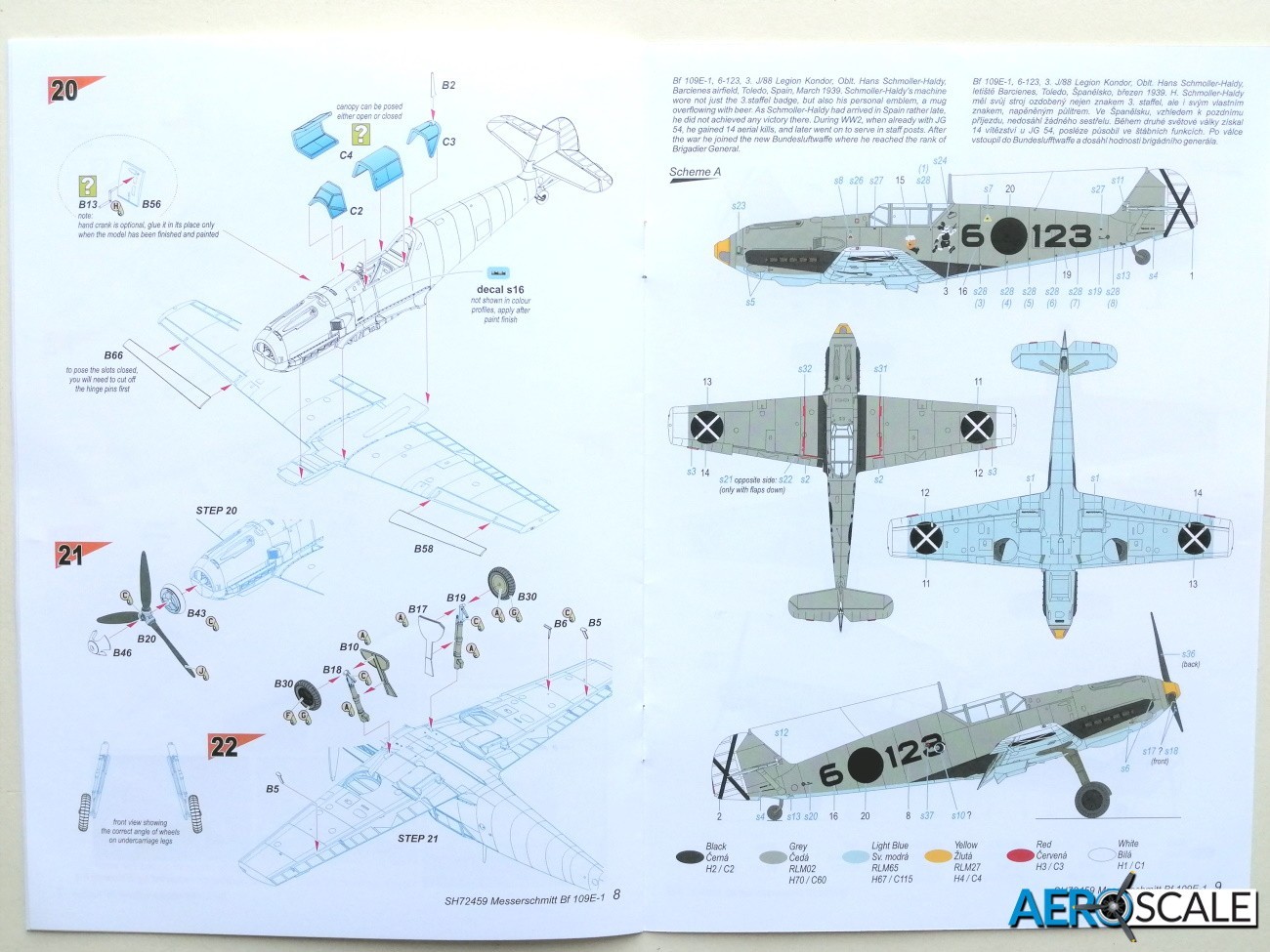 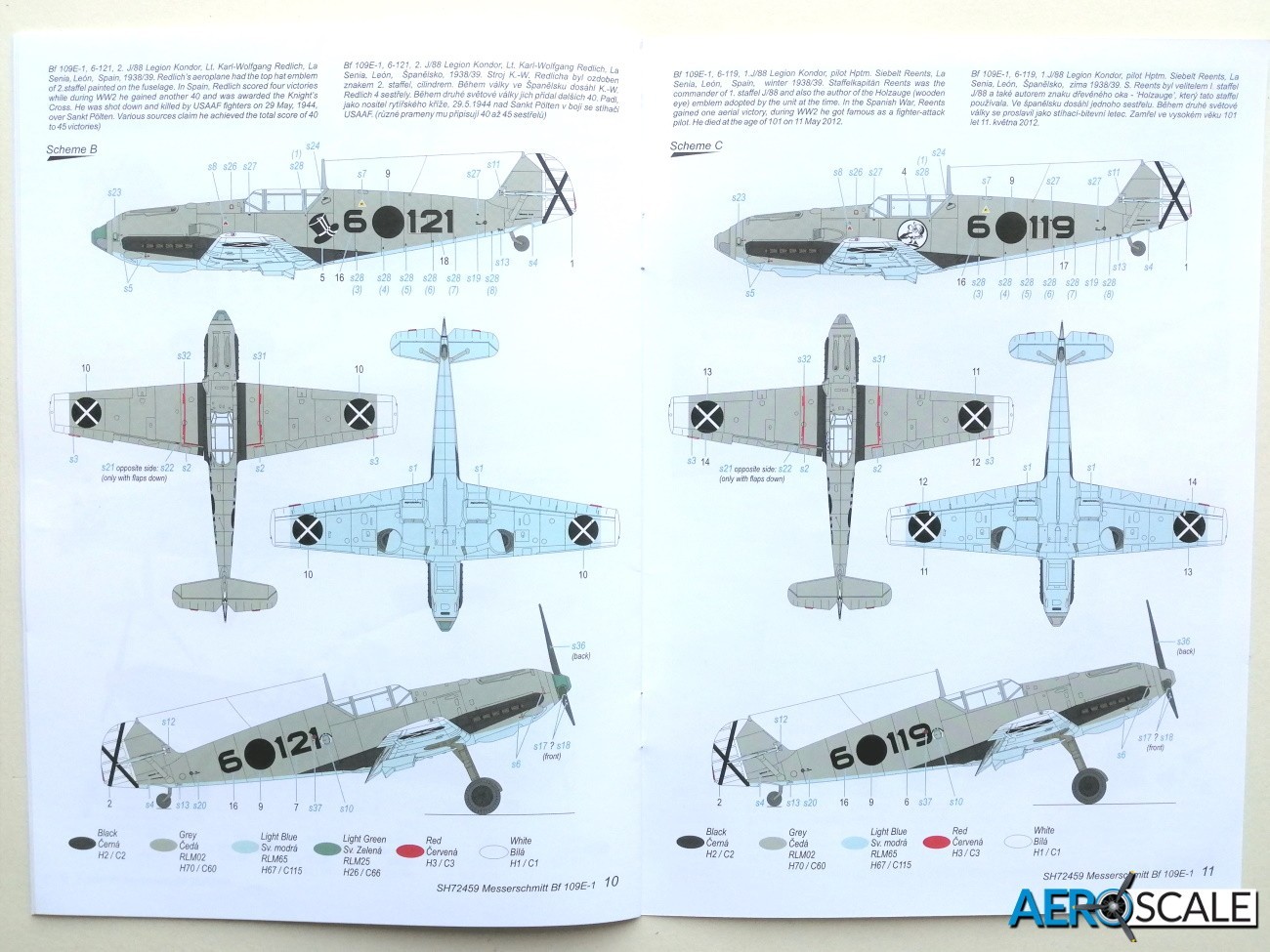