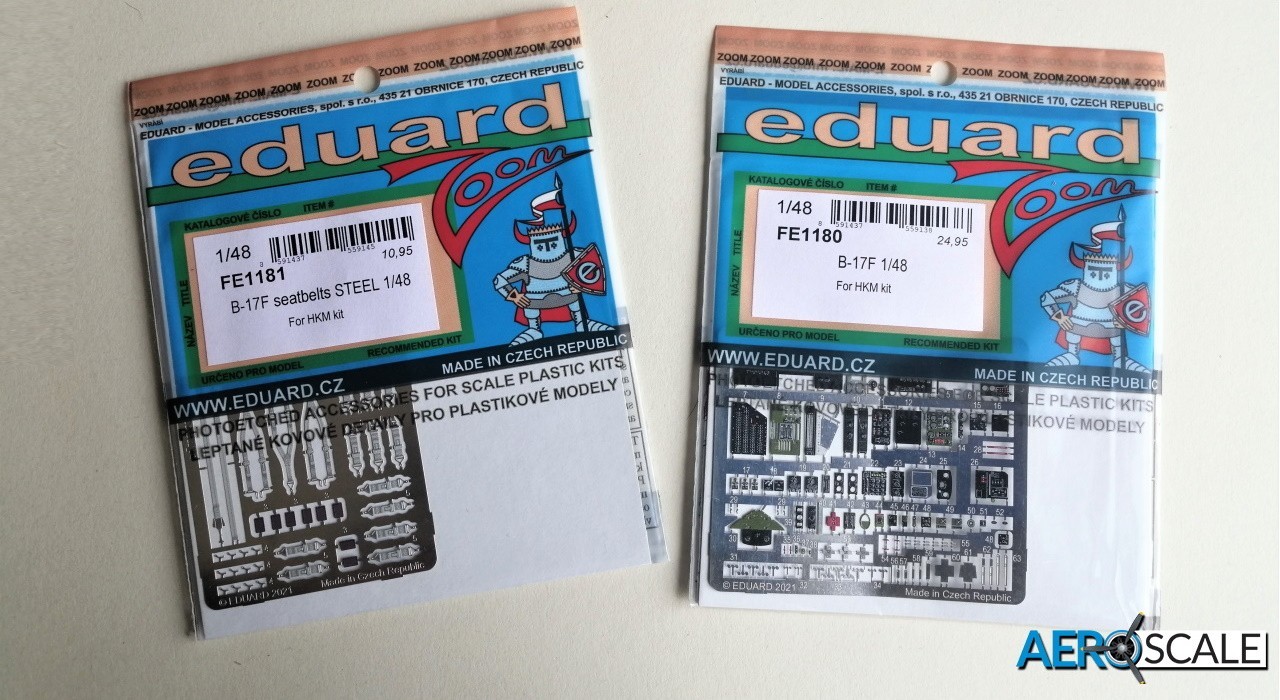 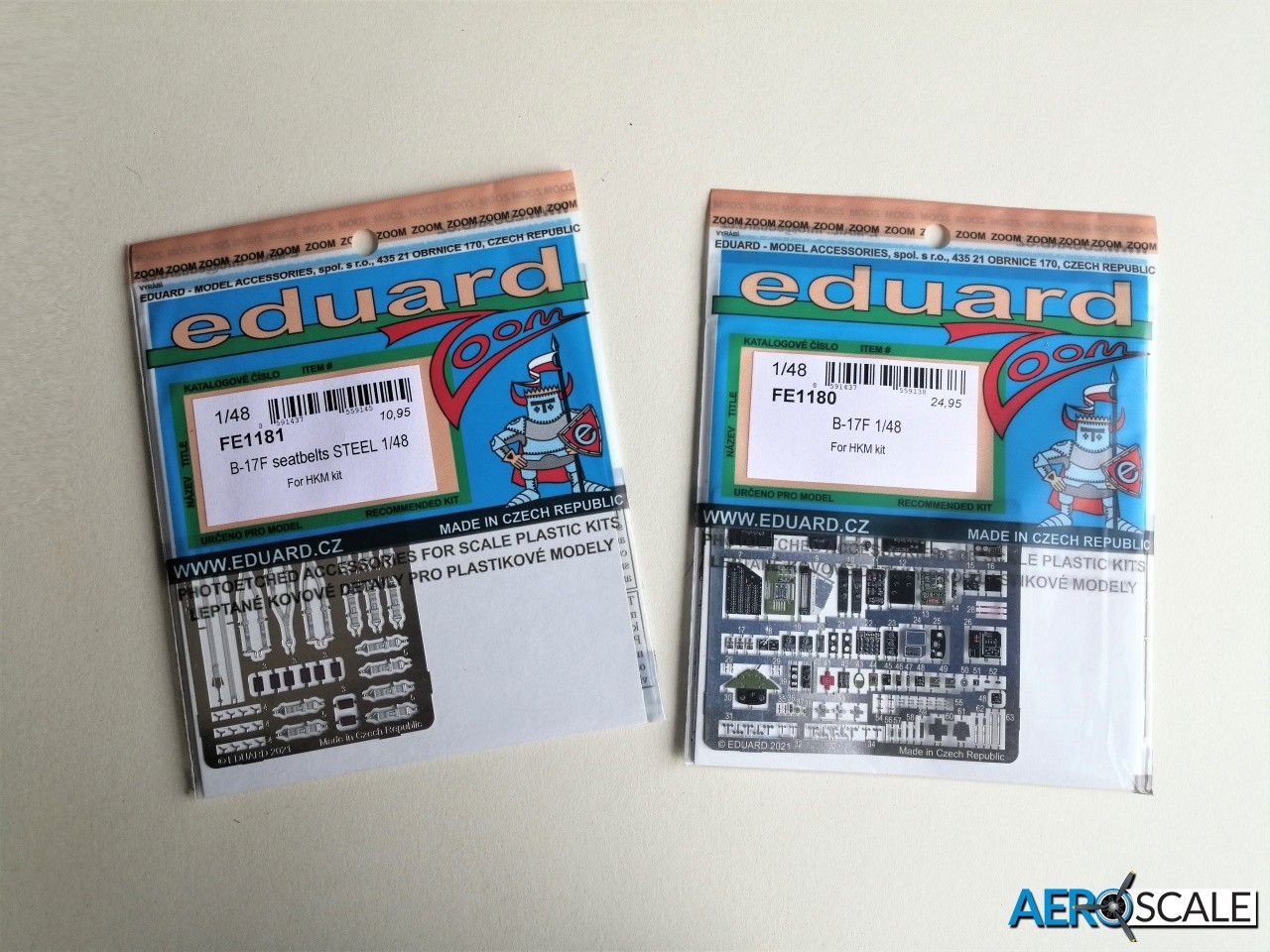 Eduard has produced a number of photo etched detail sets for the HKM Boeing B-17F and they have very kindly provided a couple of them for review. FE1180 is a Zoom pre-coloured set featuring instruments and controls and FE1181 another Zoom set provides pre-coloured seat belts. Although there is a fair bit of detail with the HKM kit a good dose of pre-coloured photo etched parts will really add the sort of detail that the majority of modellers struggle to reproduce. 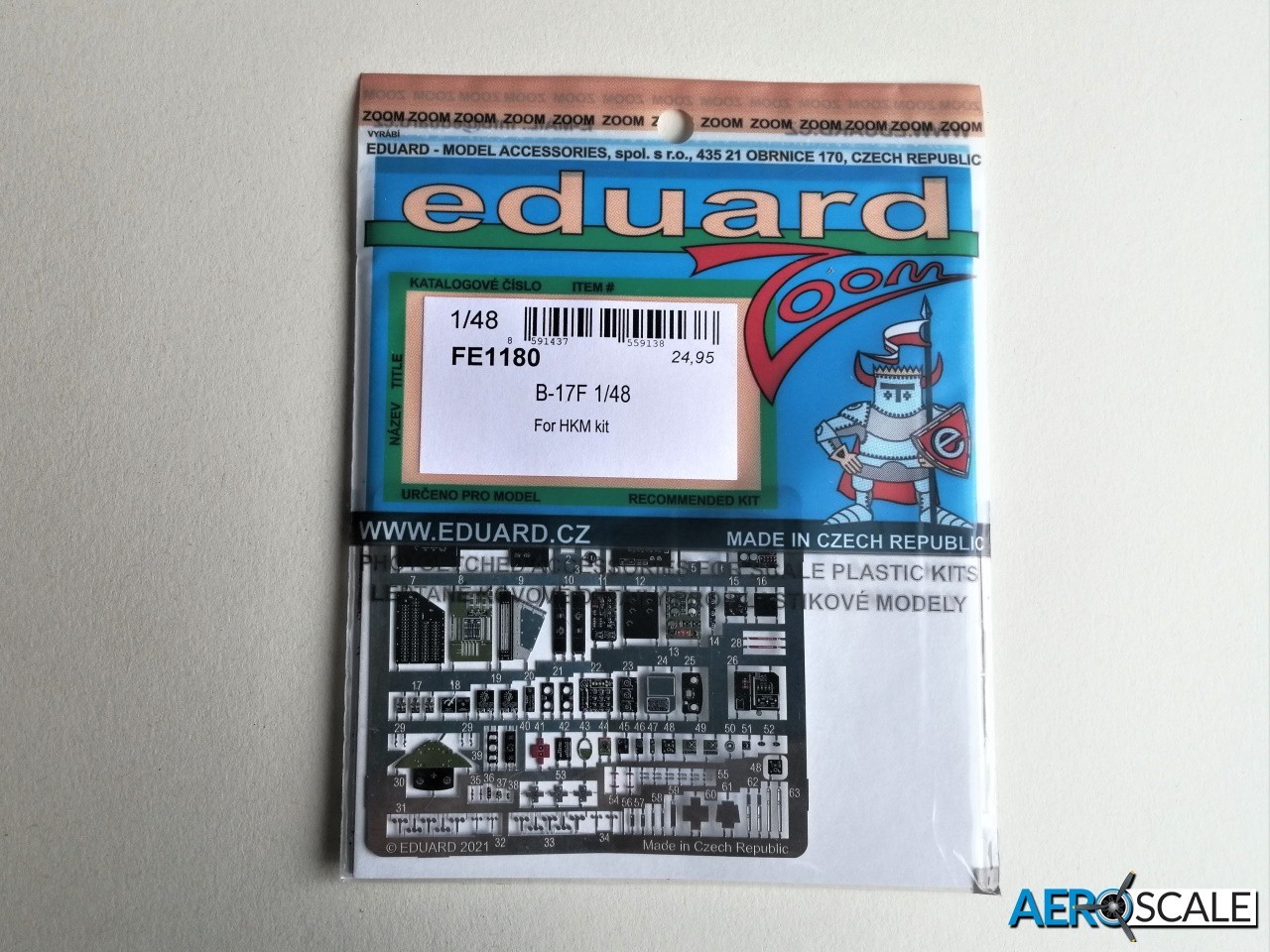 Oddly it’s not readily obvious from the title on the packaging this set is aimed at detailing the cockpit. Comprising of around hundred and four parts. There is a bit of texture on the black painted surfaces on instruments,but this is only obvious if you are looking close up. What you have with this set are finely detailed instruments and various levers and wheels. There is a bit of folding to build some of the parts up and also to give the levers a more three-dimensional look. 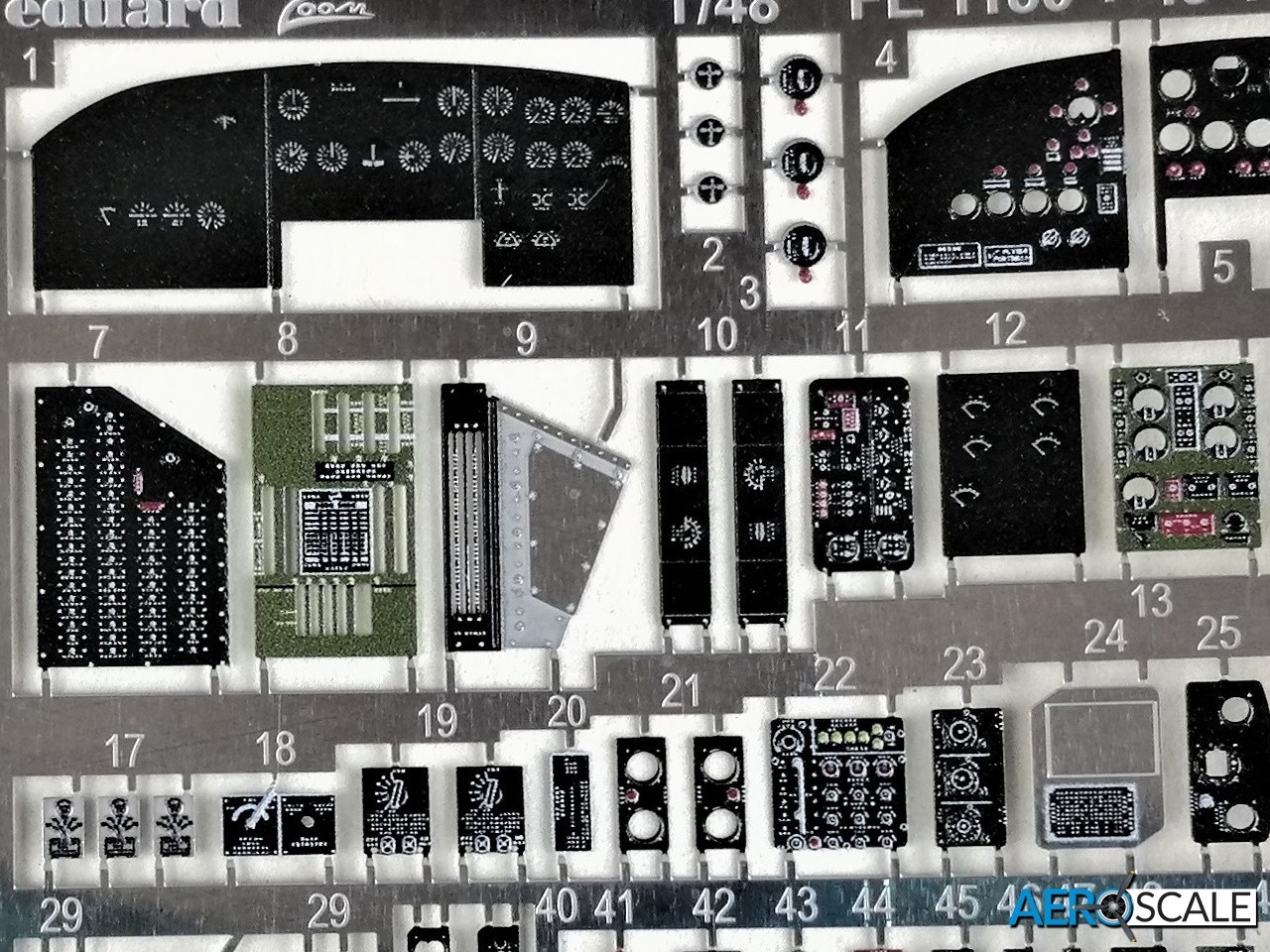 The type of detail  on the single fret include: 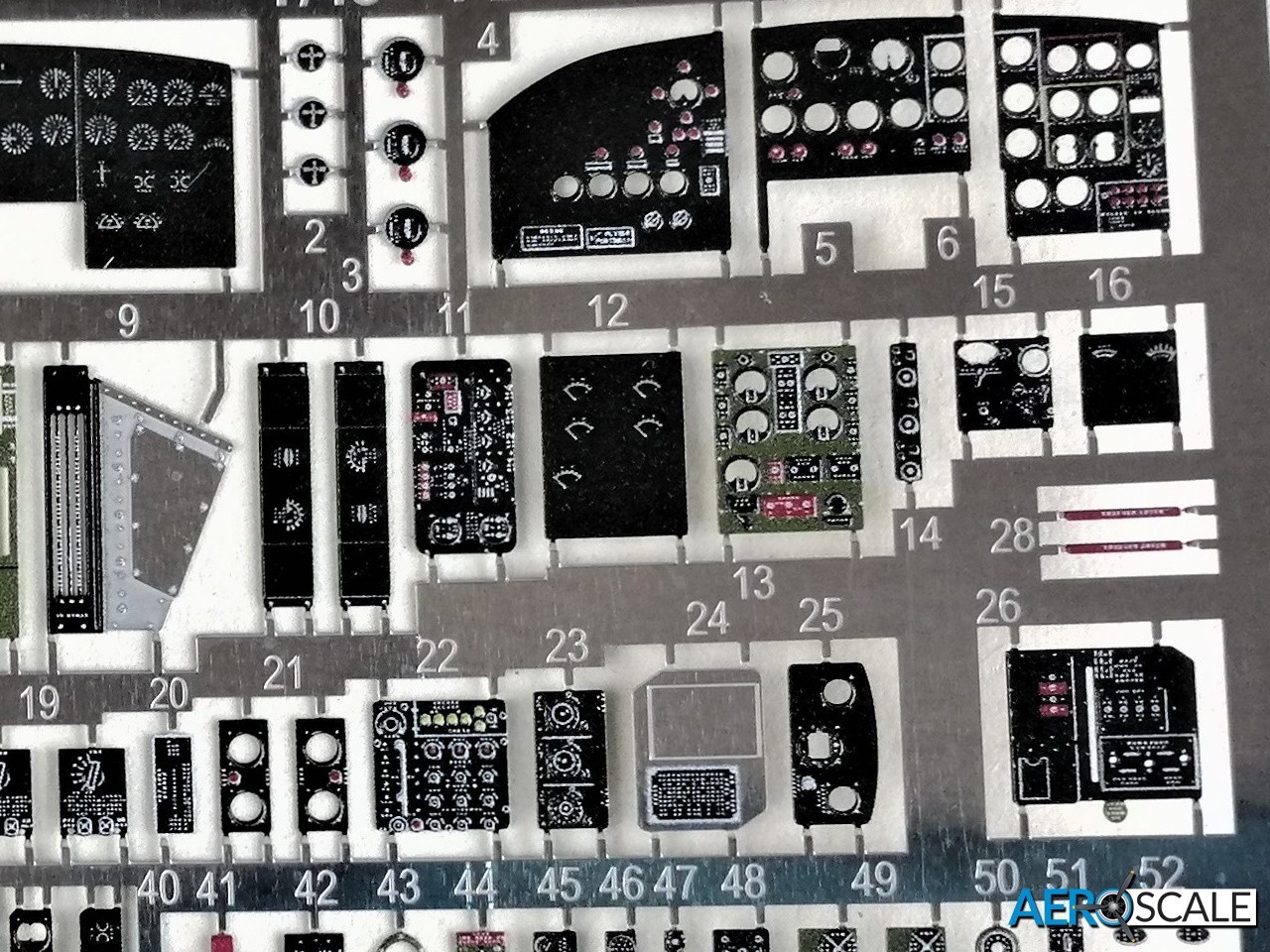 The Eduard instructions include the HKM kits part numbers to aid the construction. The main instrument panel is made up from seven parts. A lot of the HKM kits plastic detail needs to be removed before adding the PE. The instruments have a convex lens of clear varnish to replicate the glass. There are a few handles to attach including the fire suppression rocker switch. The throttle and mixture levers on the central console need thin plastic rod attaching [not included] to create the hand holds. Other levers here are for controlling the props. There are further details on the central console including fuel shutoff and prop feather buttons. There are separate pieces replicating the rocker switches for the cowl flaps levers here too. 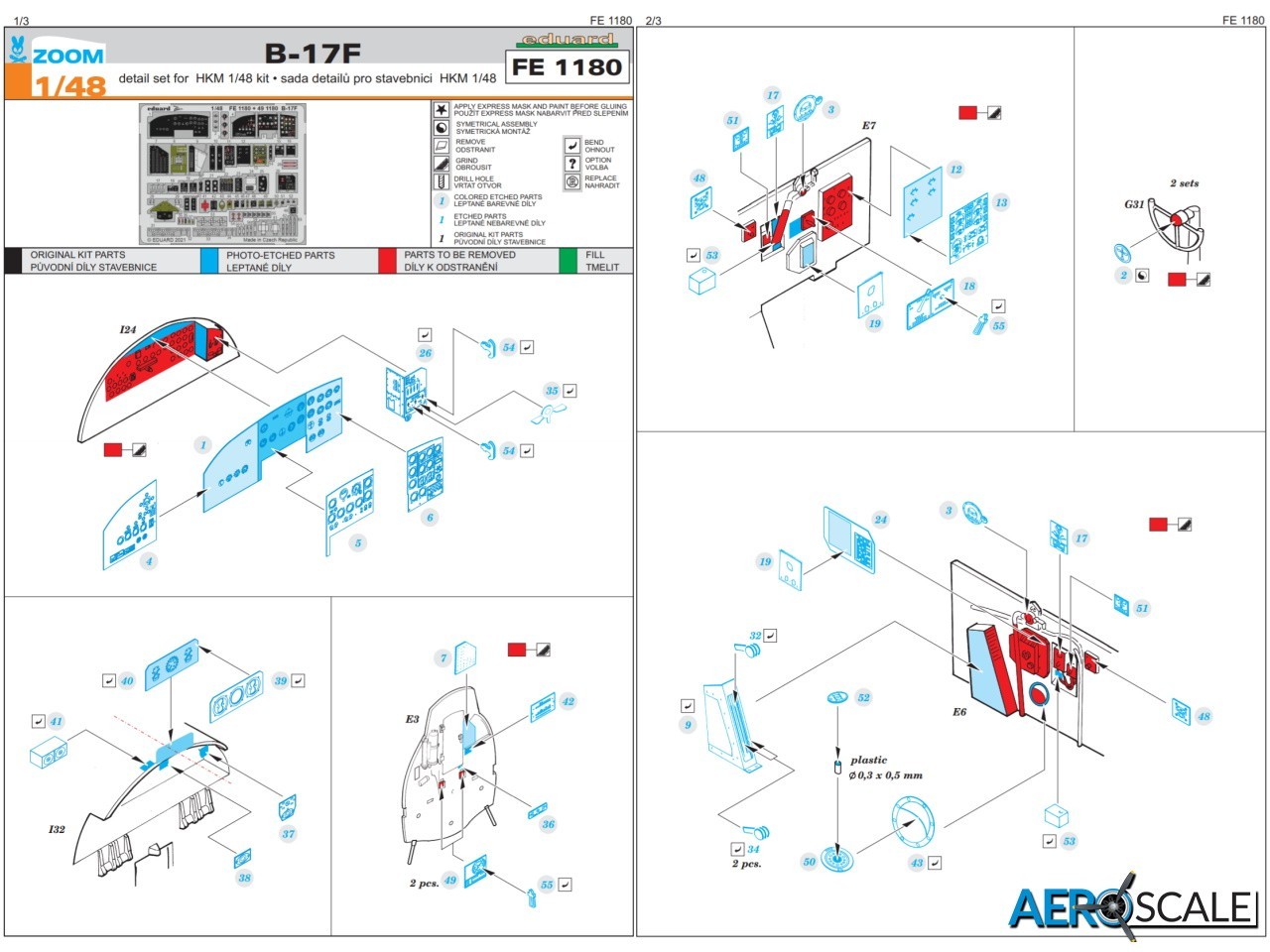 The instrument panel above the pilots is also included and the brackets for the grab bar are also included. The bar itself is made up from plastic rod that is not included.

On the pilots left side there is the electrical control panel. On the co-pilots right there is a panel and levers for the turbocharger inter cooler, engine primer control and various other details. Behind the pilot there is a fuse box to fit to the bulkhead.

This set will certainly create some superb detail as long as your comfortable using photo etched parts. 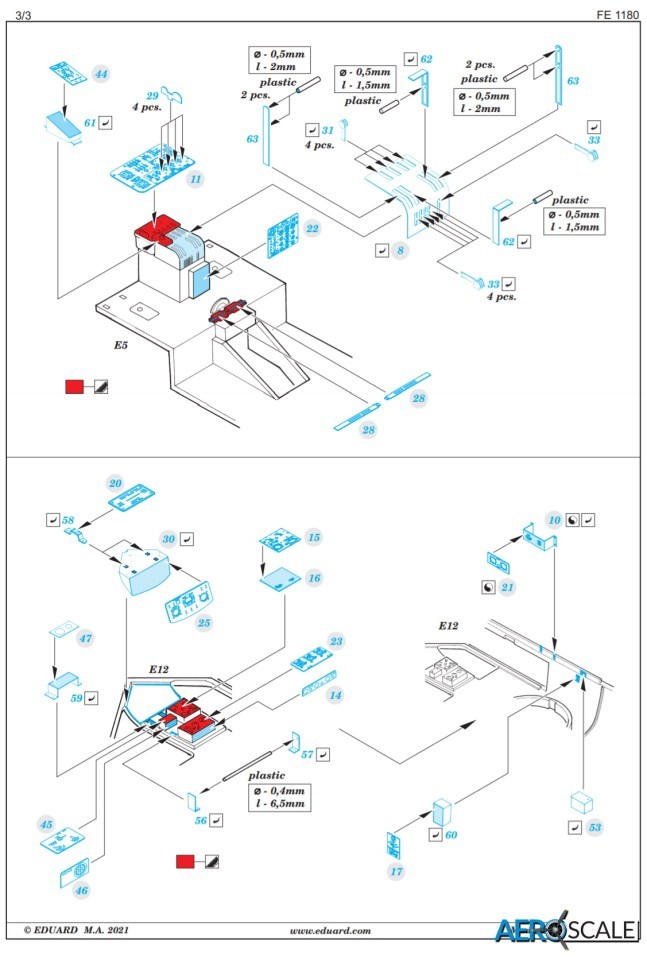 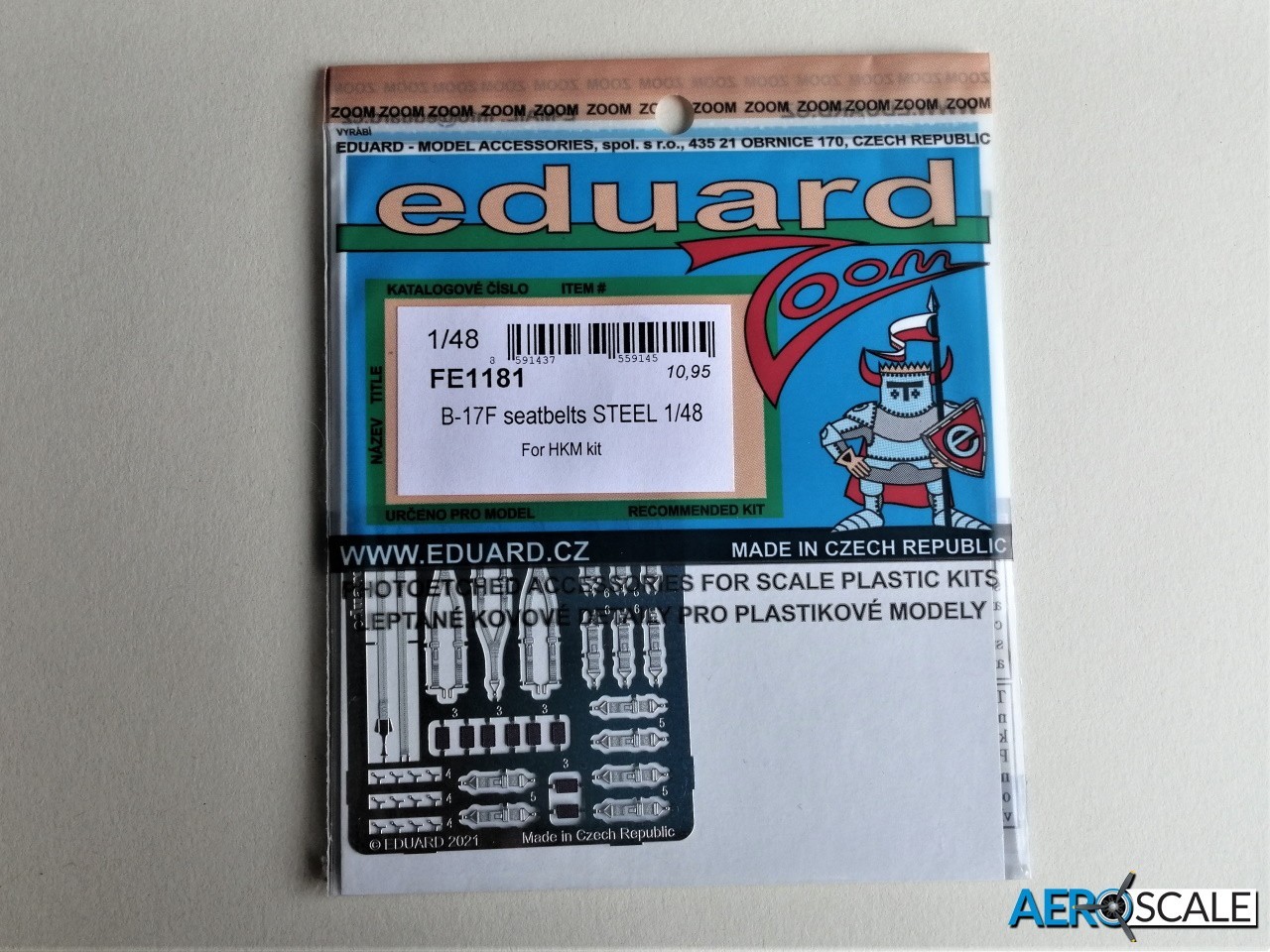 There are thirty-seven pre-painted parts to make up the seatbelts for five crew seats.  I would imagine it’s the ones that are more obvious. The pilots seat belts are made up from five parts. The instructions identify correctly the bombardier and tail gunners’seats, but the other seat I can only presume is for the navigator. Eduard has given the incorrect kit part number. The bombardier and navigators[?] seat belts are made up from five parts. Interestingly  Eduard accurately display the appearance of the bombardier and navigator seats in their instruction, but they bear no resemblance to the inaccurate kit seats. The rear gunners seatbelt is made up from four parts. The left-over parts including a spare shoulder harness for the pilot and a lap strap can be put in the spares box. As ever the fabric and stitched look of the straps is very good. 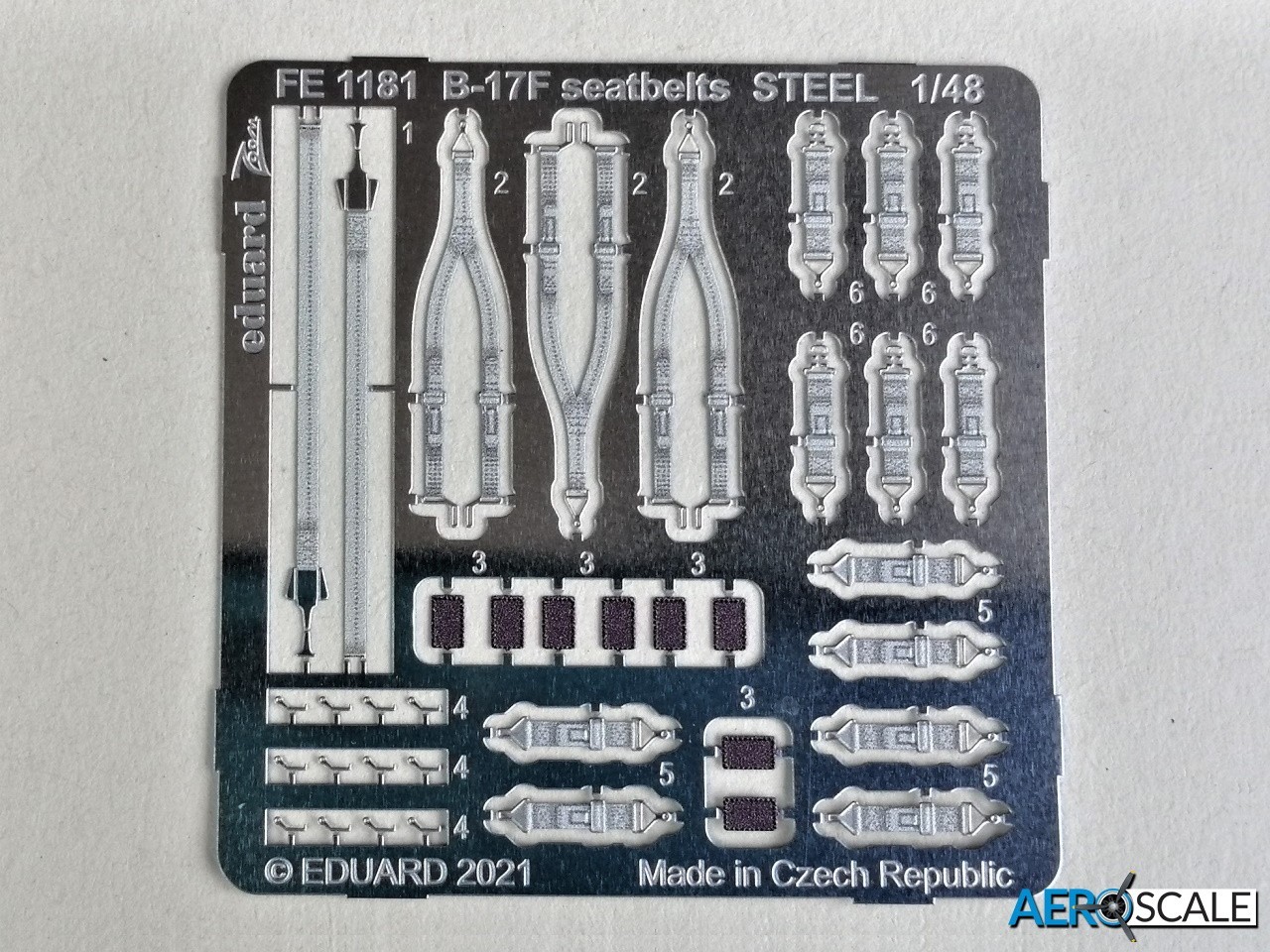 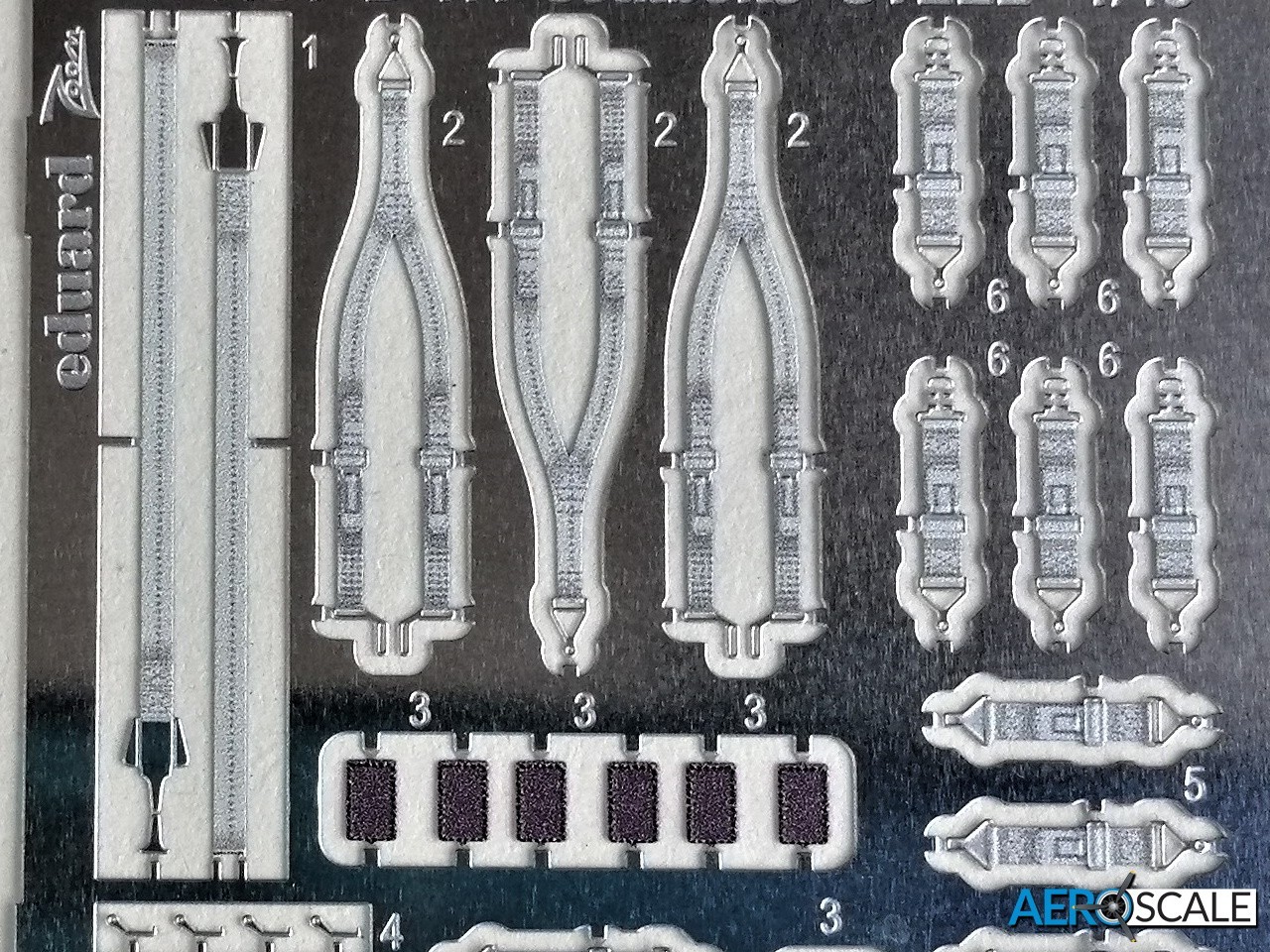 If your happy working with PE then these two sets will go a long way to supplement the detail already in the HKM Boeing B-17F. Instruments are always tricky to portray effectively and set FE1180 will certainly save time and effort, with outstanding results. 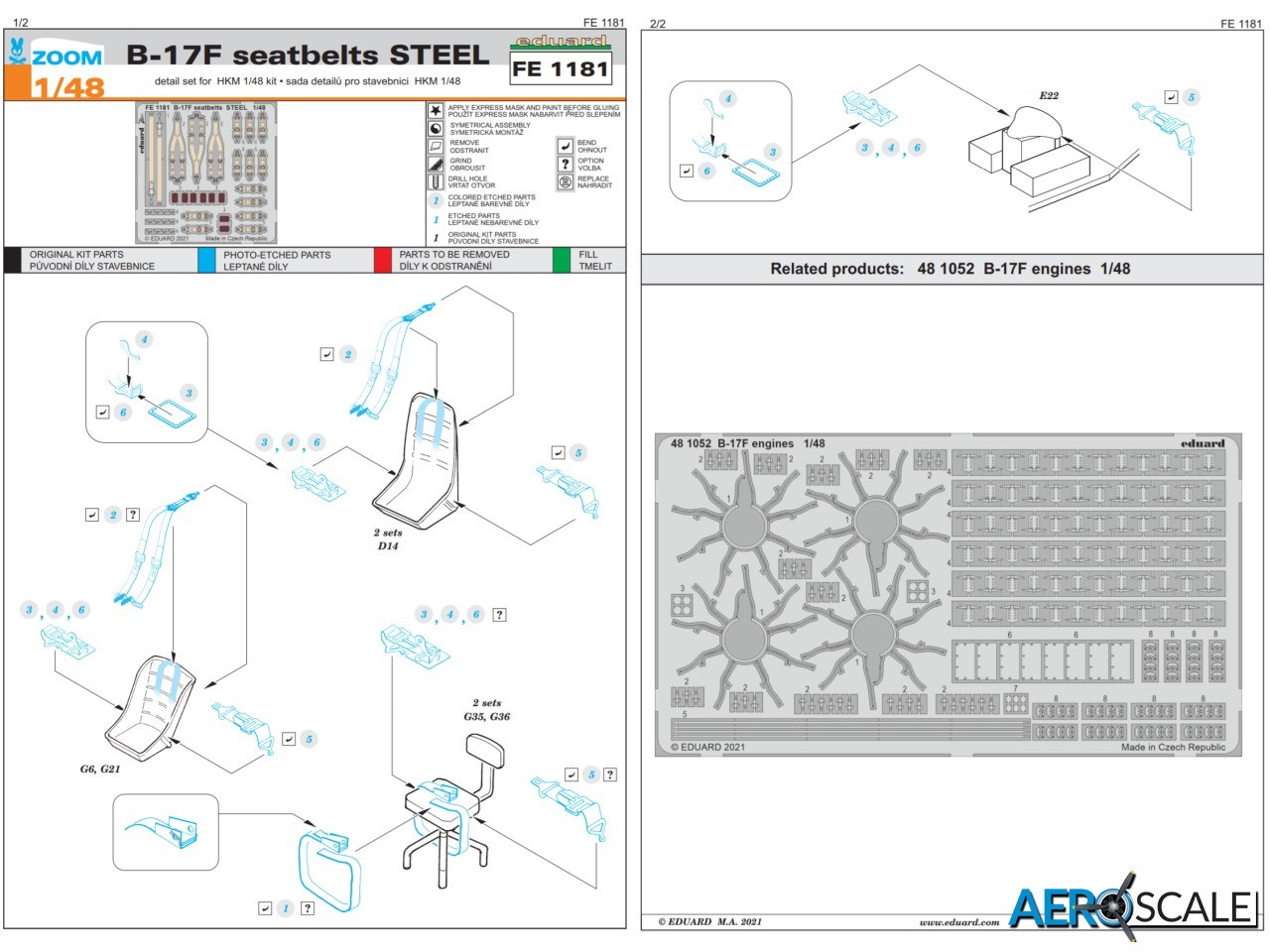 Thanks to Eduard for providing the two review samples.

Please remember, when contacting retailers or manufacturers,to mention that you saw their products highlighted here - on AEROSCALE