Litespeed
Editor
posted on 1 week ago
348
views
Tim takes a look at the new tool 1:72 scale Avia CS-199 trainer which Eduard has released a s a ProfiPACK 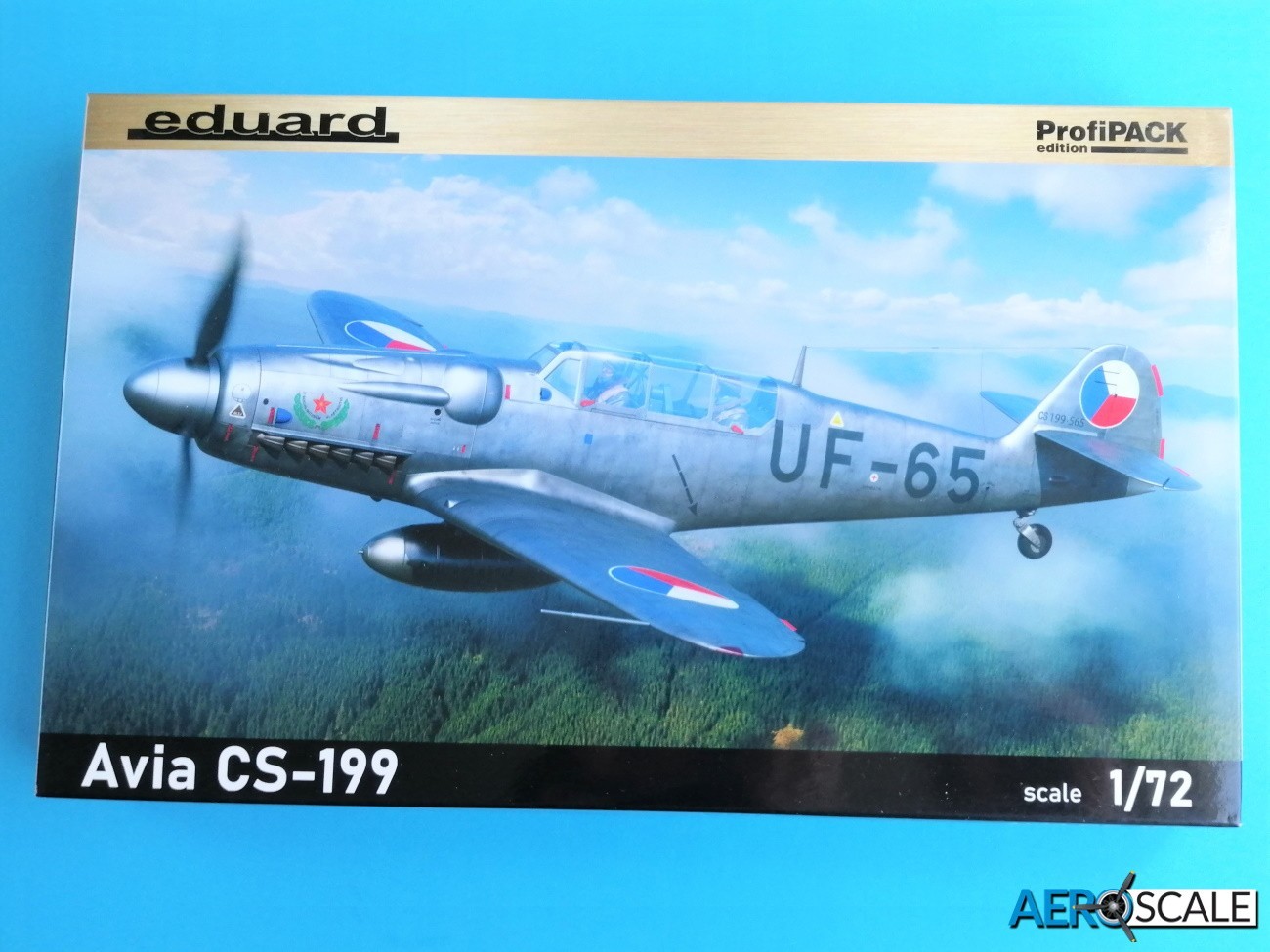 Like many ravaged and impoverished countries after WWII, Czechoslovakia needed to rebuild its Airforce.  The government were looking for ways to build the Air Force as cost effectively as possible. The original plan was for Avia to build a fleet of S-99’s using the airframe of the Bf 109G/K with the DB605 engine. An unfortunate blast at the Krásné Březno ammunition facility destroyed the stored engines. So only twenty-one S-99 were completed. As there was a good stockpile of Jumo 211 and 211F engines, it was decided to marry these engines to the airframe of the Bf 109G/K. this solution put the S-199 at a serious disadvantage compared with it contemporises. The Jumo 211 was the powerplant for the He 111 and was rated at around 107hp compared to the 426hp of the DB605. On top of that the Jumo 211 was fitted with bomber style Jumo VS-11propeller that produced a massive amount of torque. The torque was no problem on a two-engine bomber, but seriously dangerous on a light weight fighter with a narrow track undercarriage. Because of the torque the handling of the S-199 was difficult and as a result the s-199 was nicknamed the ‘Mezek’ or the mule. 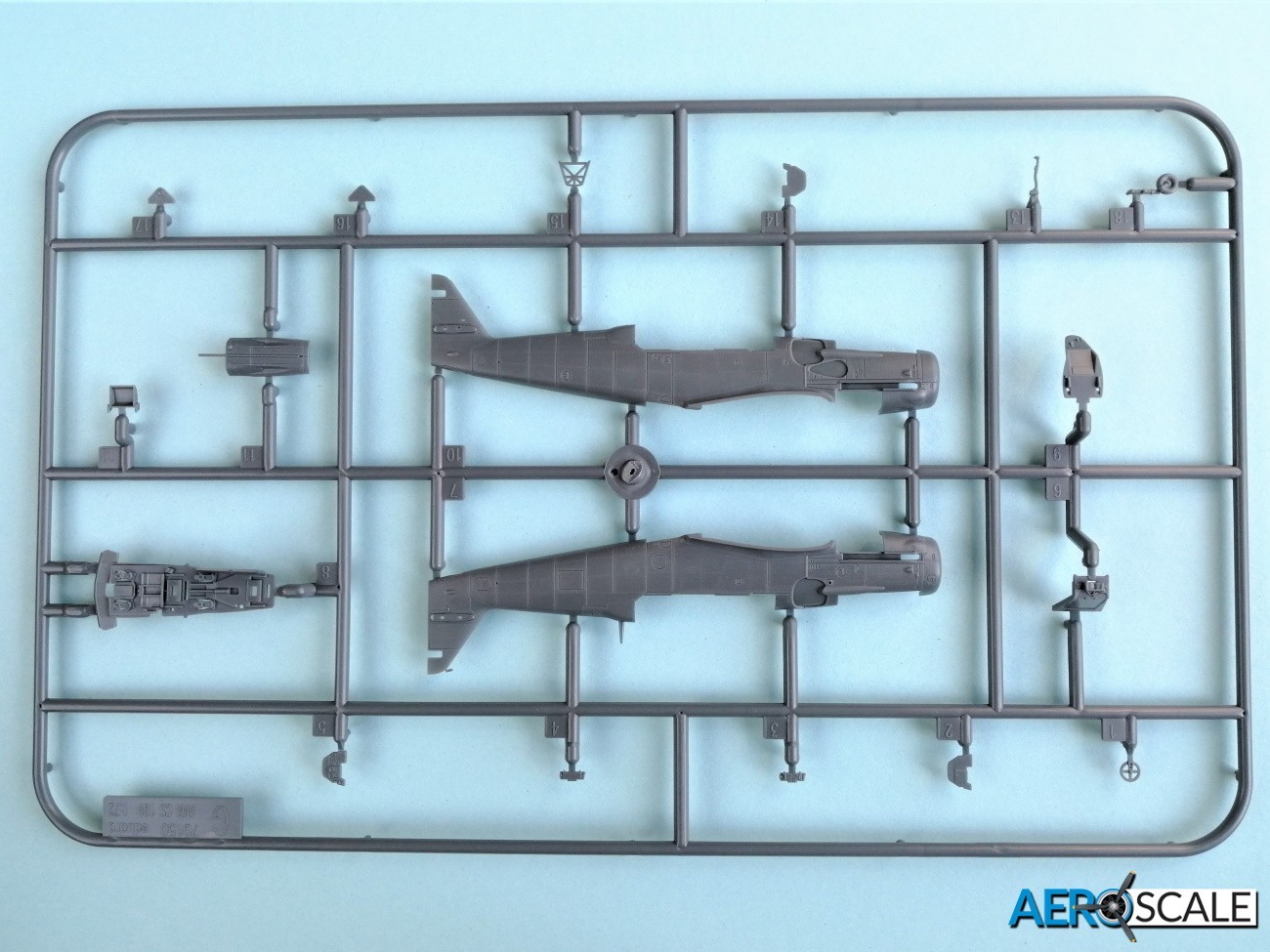 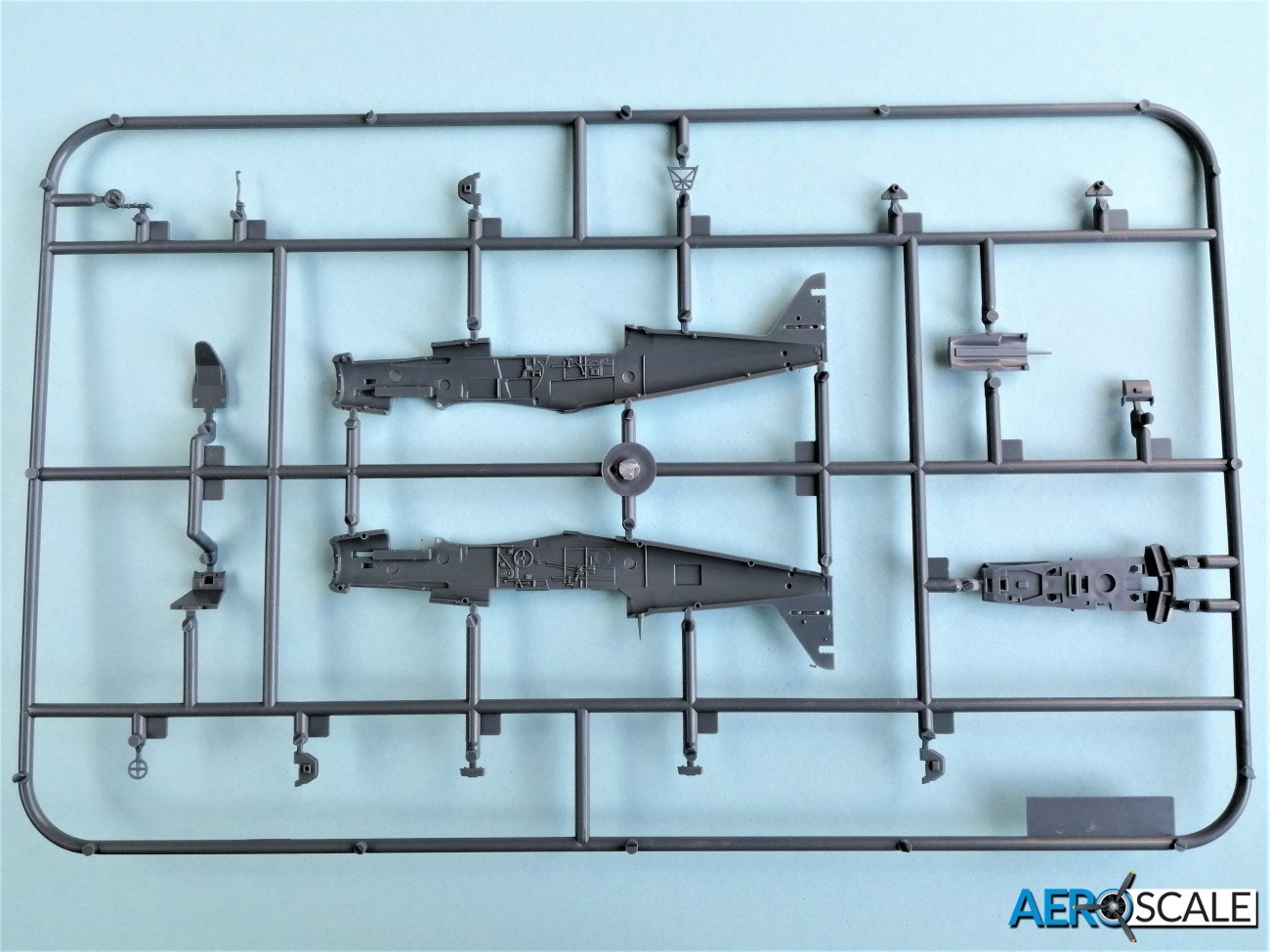 To help with training during WWII the Luftwaffe produced the two seat Bf 109G-12. Avia continued building the Bf 109G-12 first as the CS-99 [thirty-two built] with the DB605 and then as the CS-199 [eighty-two built] with the Jumo 211. To create the space for the instructor, the fuselage fuel tank was reduced in size. As a result, the belly fuel tank was pretty much a standard feature. Around twenty-four CS-99’s were converted to the CS-199. They were fitted initially with the hinged greenhouse style hinged canopy of the Bf 109G-12, before being replaced with a sliding canopy. Despite being introduced to the high torque of the CS-199 trainer many S-199’s were lost in accidents. 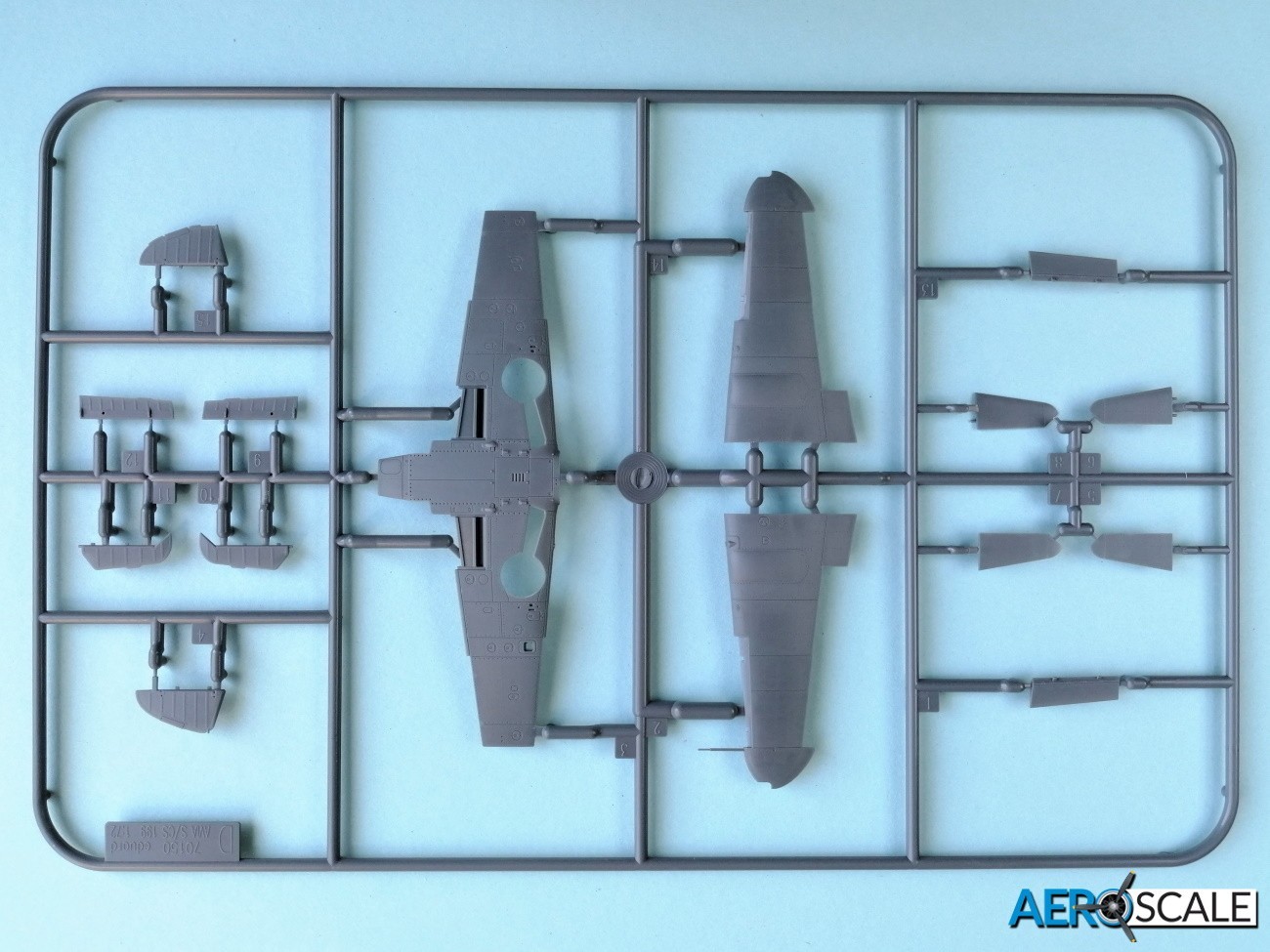 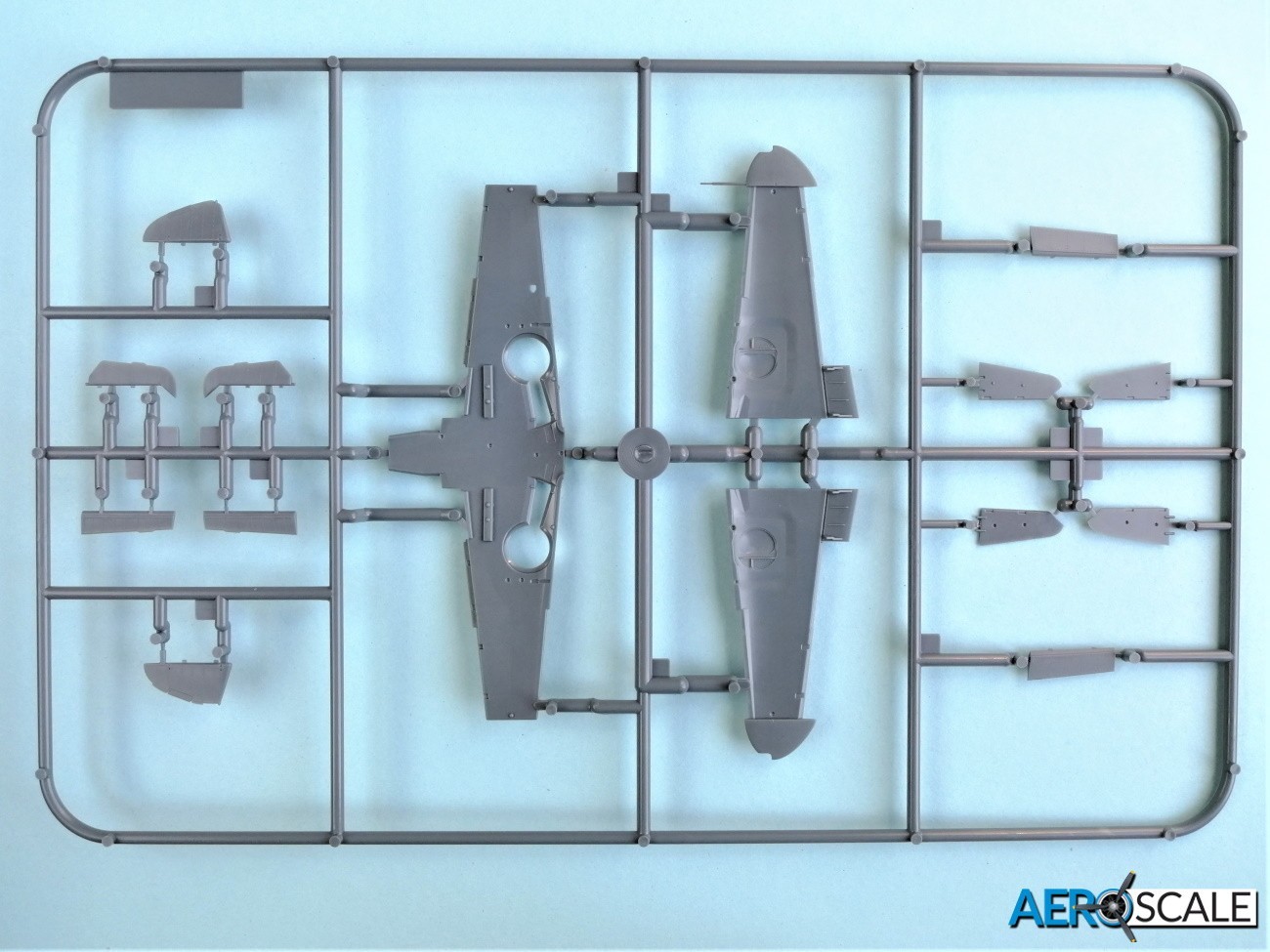 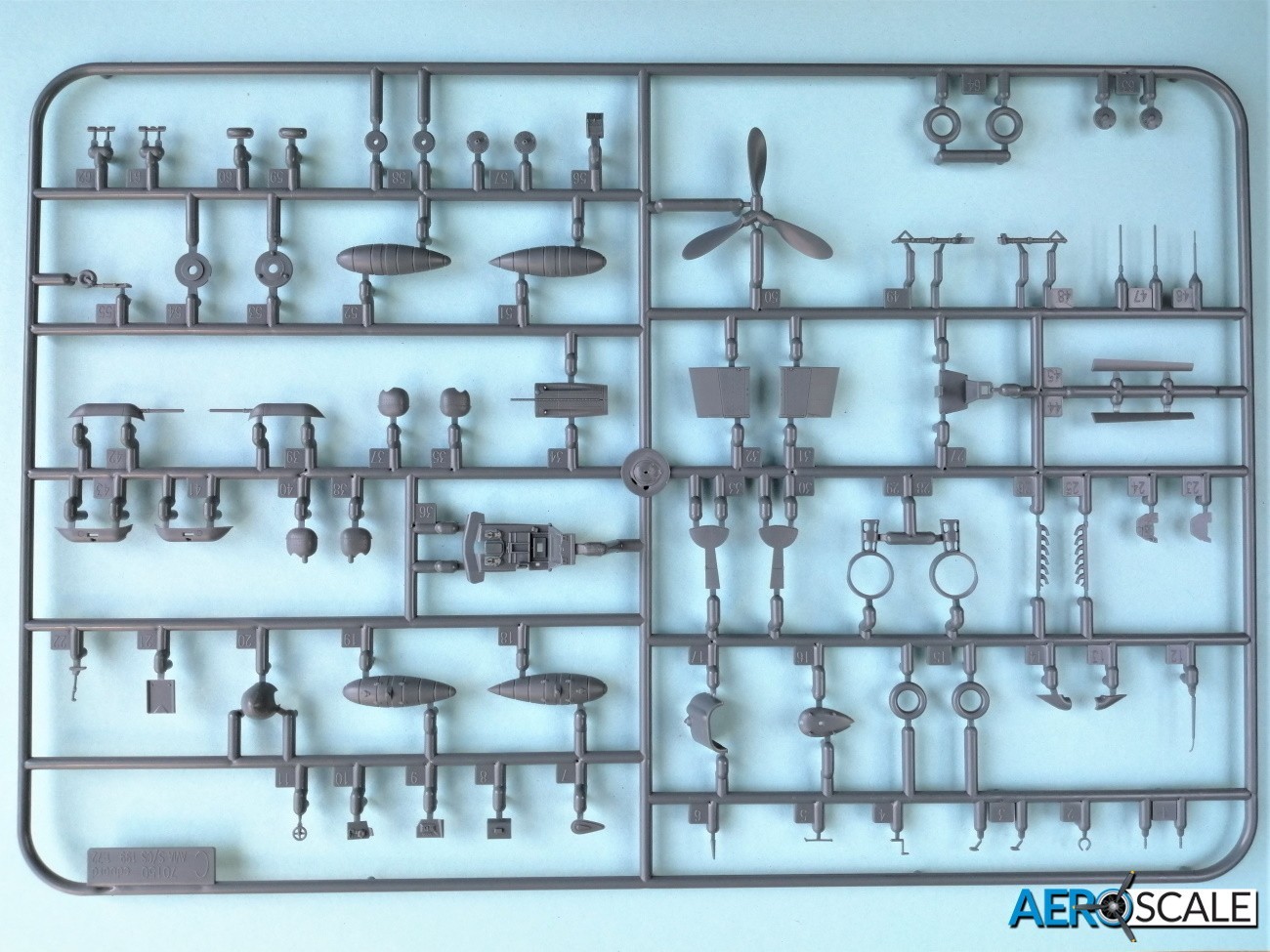 Eduard released the single seat 1:72 scale Avia S-119 Mezek last month and they have followed up with the two-seat version this month. Like the S-199, the CS-199 is boxed as a ProfiPACK with all of the additional pre-coloured photo etched [PE] detailing parts as well as kabuki paint paint masks. 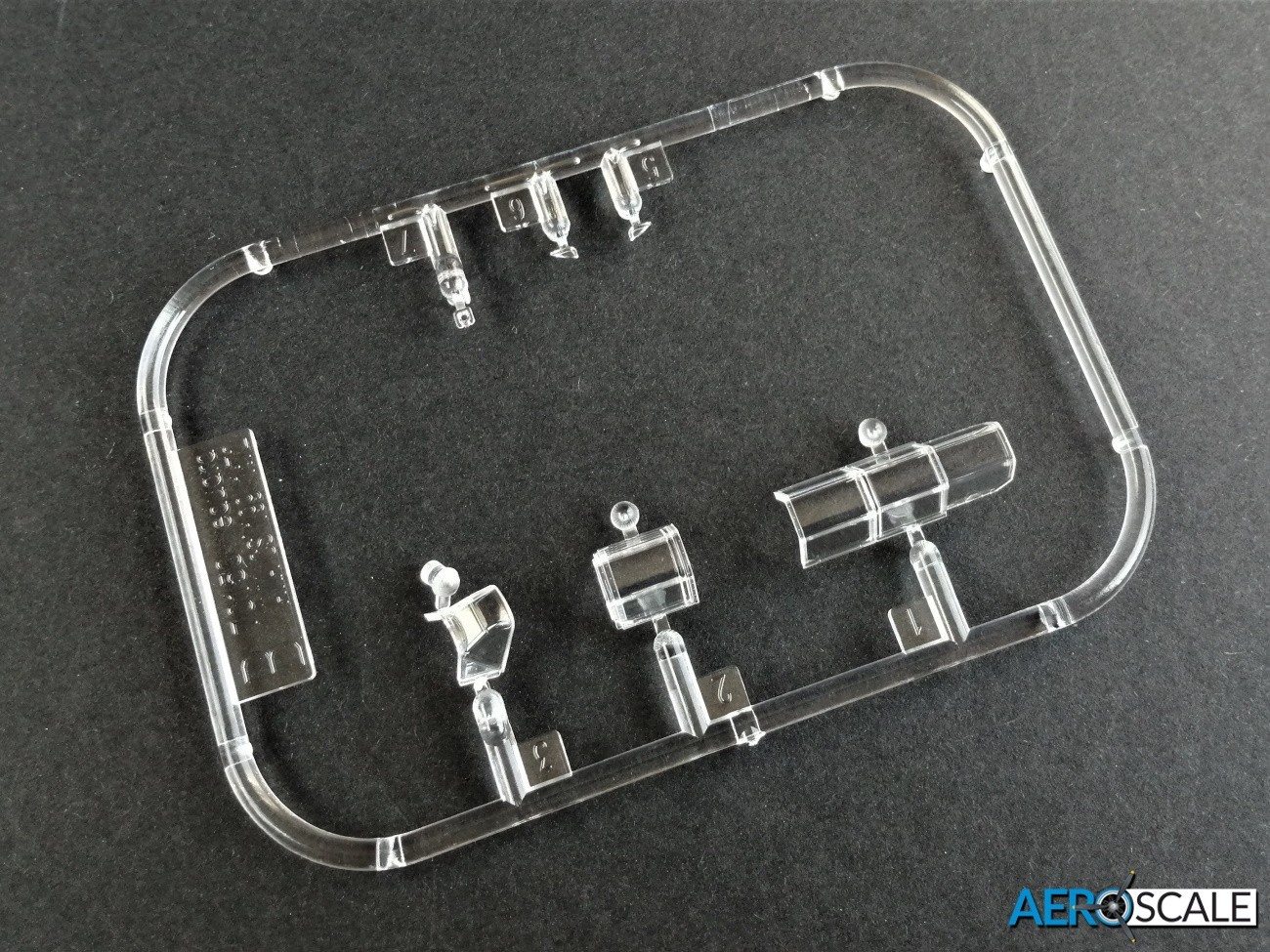 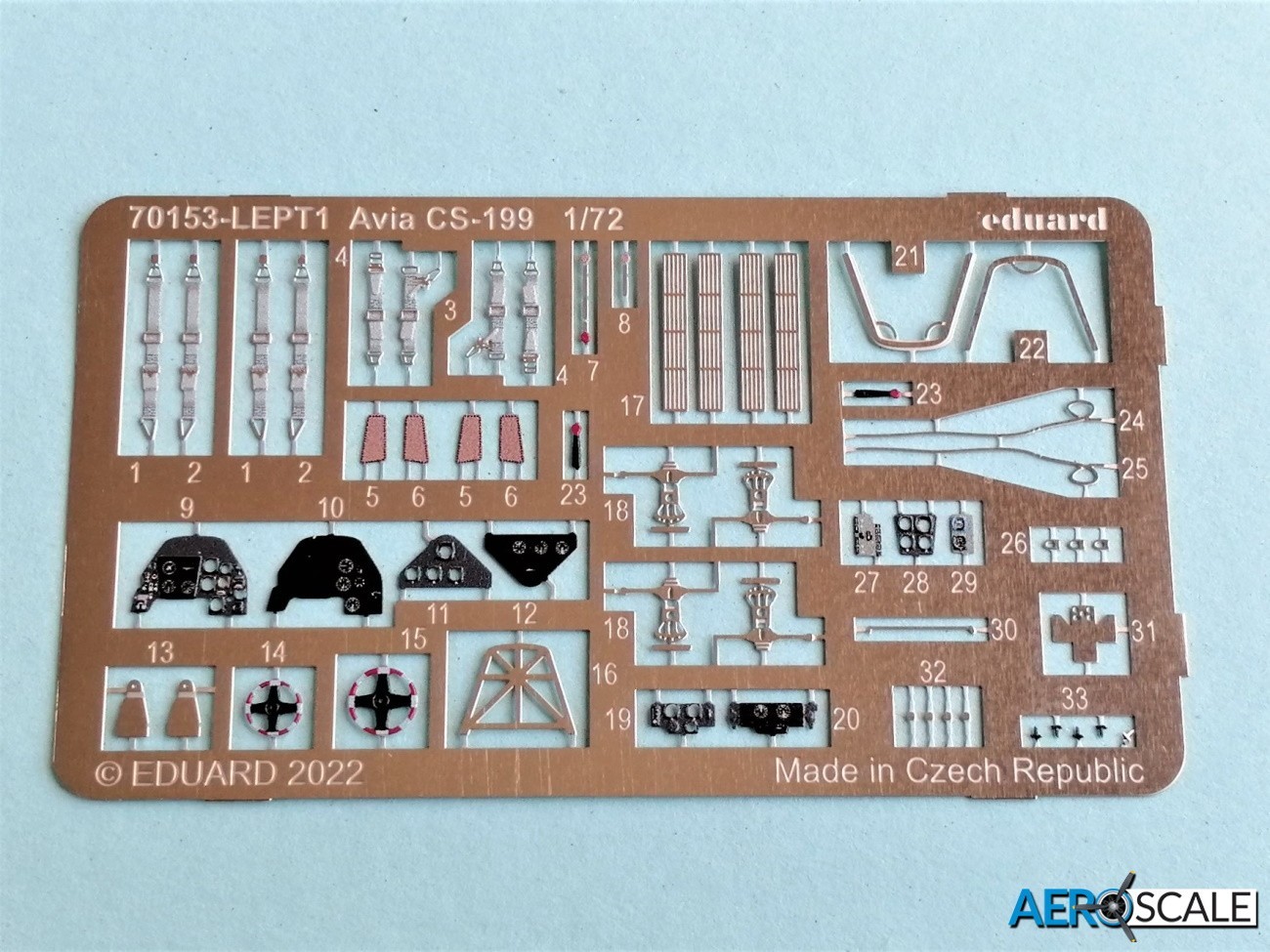 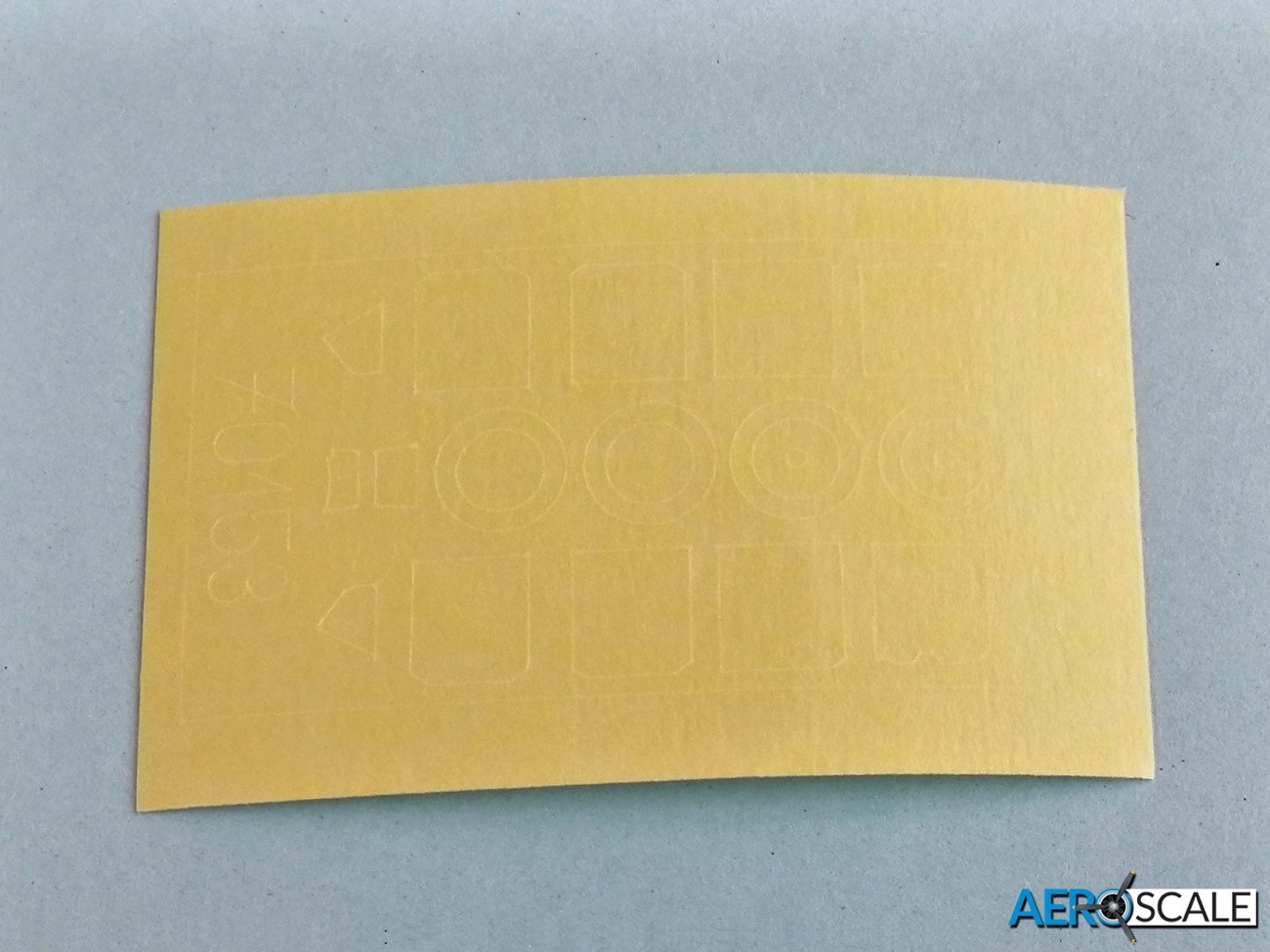 Inside the top opening box you will find: 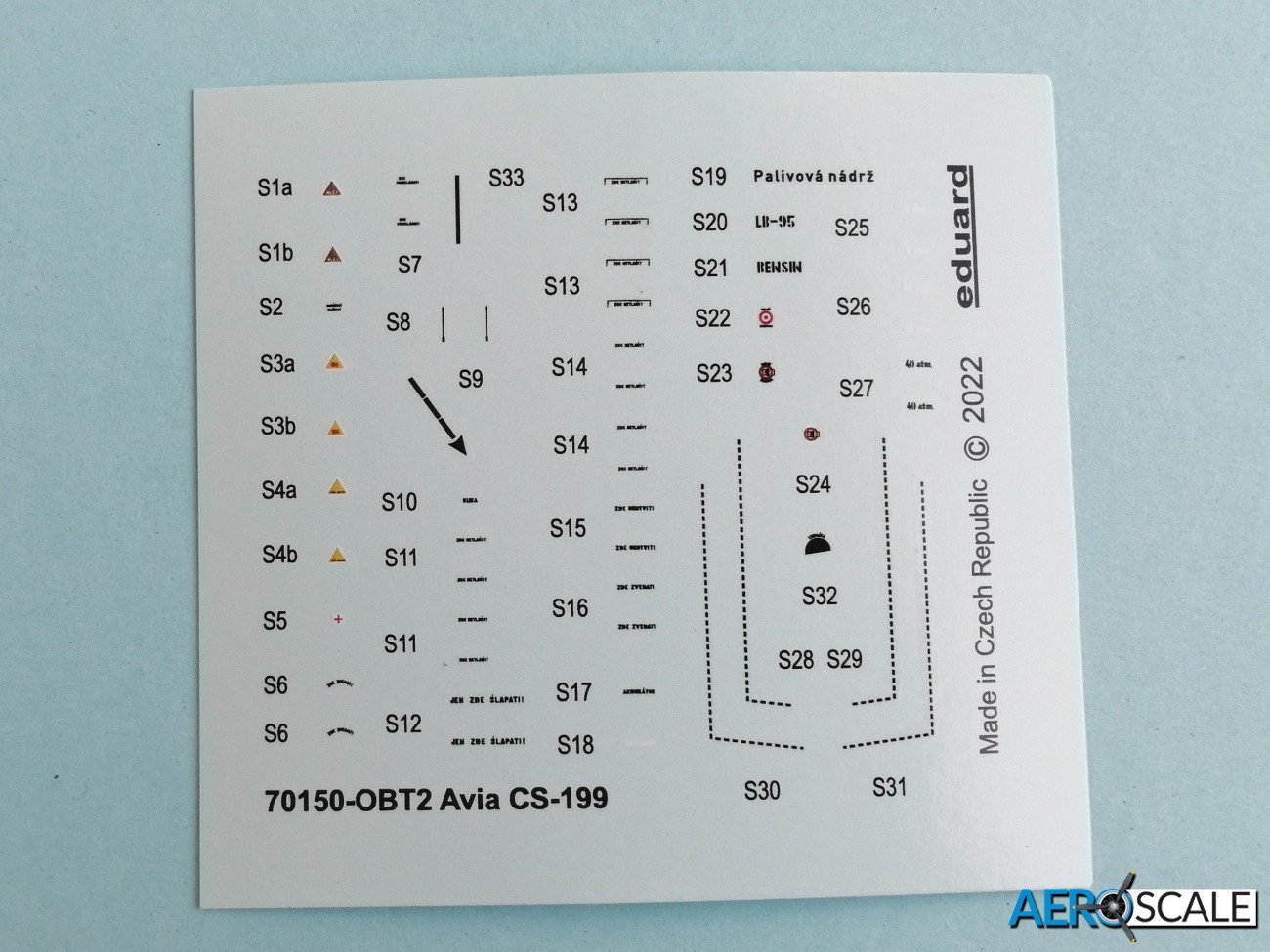 Opening the box, you will not be surprised to see some great raised and recessed detail. The panel lines, fasteners and rivets are superbly done. There does seem to be a low parts count on the sprues, with around a hundred and five grey plastic parts. Of that around twenty are not used. 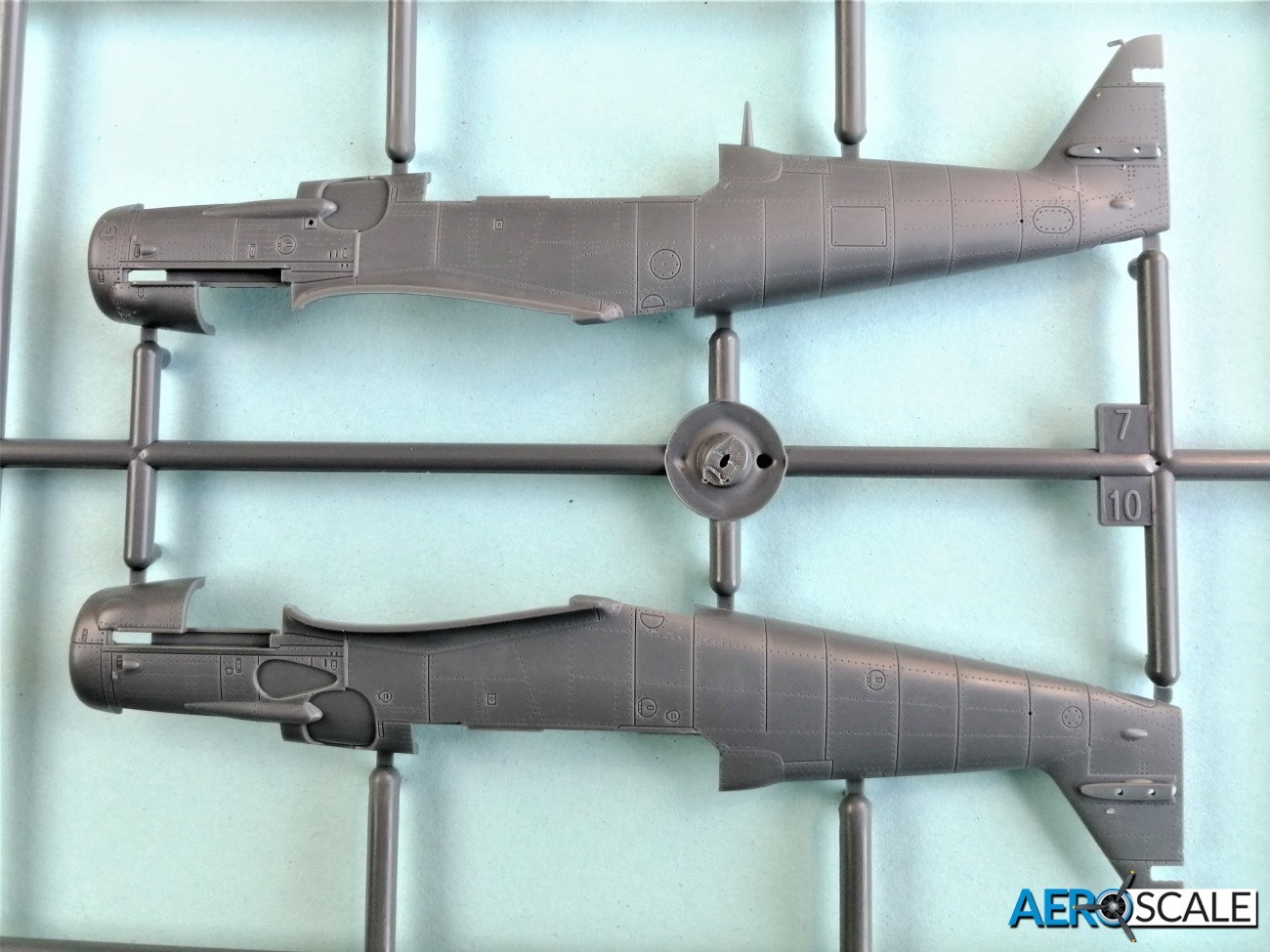 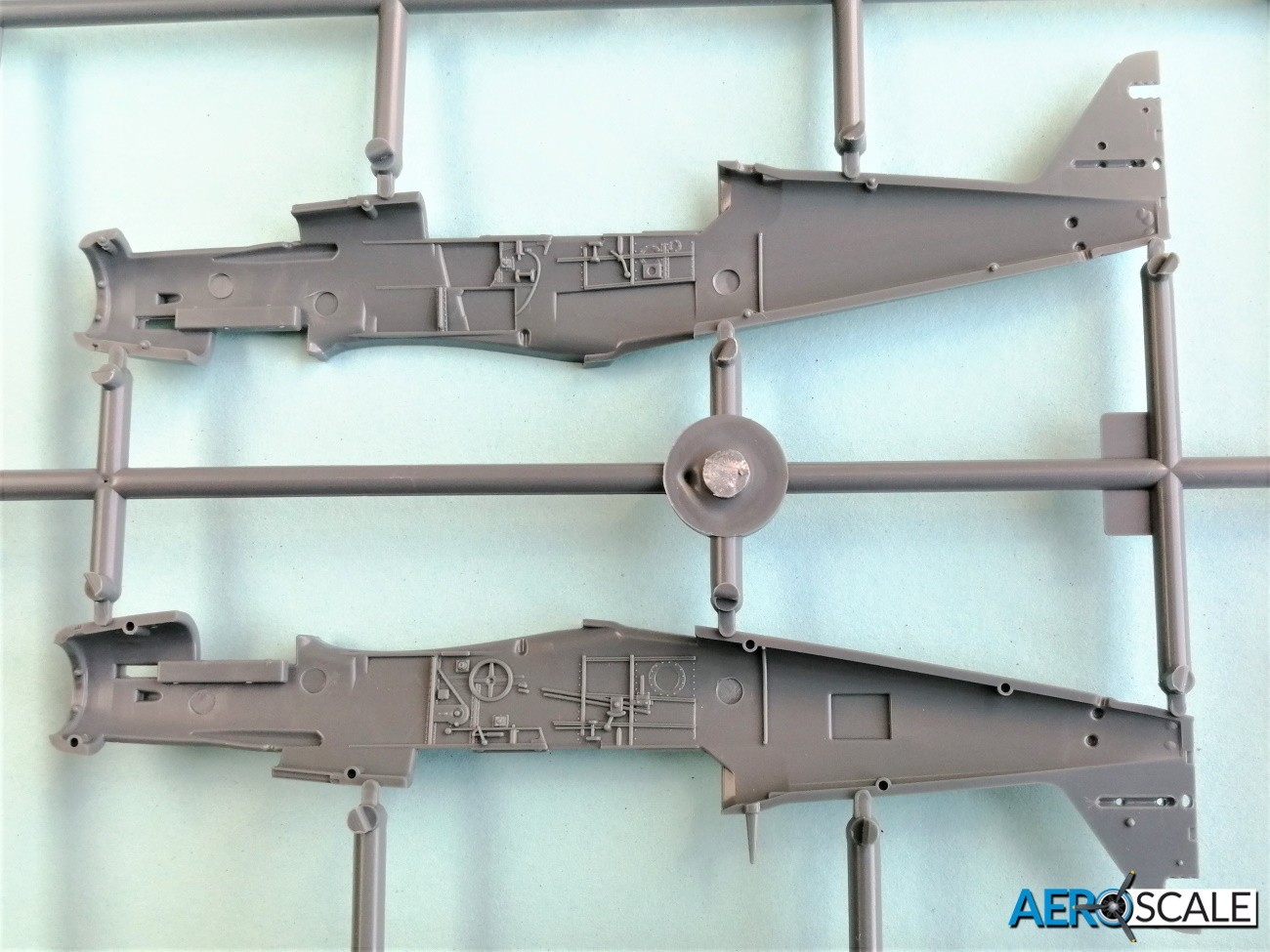 Eduard has incorporated quite a bit of cockpit detail onto the fuselage halves thus saving on parts. The raised detail will look good with some careful dry brushing. Even so there are around twenty-four plastic parts to detail the cockpit. Not to mention the pre-painted PE. Typically, with a ProfiPACK Edition Eduard provide three ways to portray the instruments: PE, decals or painting the detailed plastic parts. The floor of the cockpit has some good-looking rudder pedals moulded on, though there are PE ones with toe straps too. If using the PE pedals then the plastic ones need to be cut off. Bucket seats are both two part and there are PE seat belts to fit. The cockpit is finished off with control sticks, trim wheels [PE or plastic]. There are additional instruments in plastic, PE and decals to add to the right wall of the cockpit. All in all, the cockpits will be nicely detailed particularly for this scale. 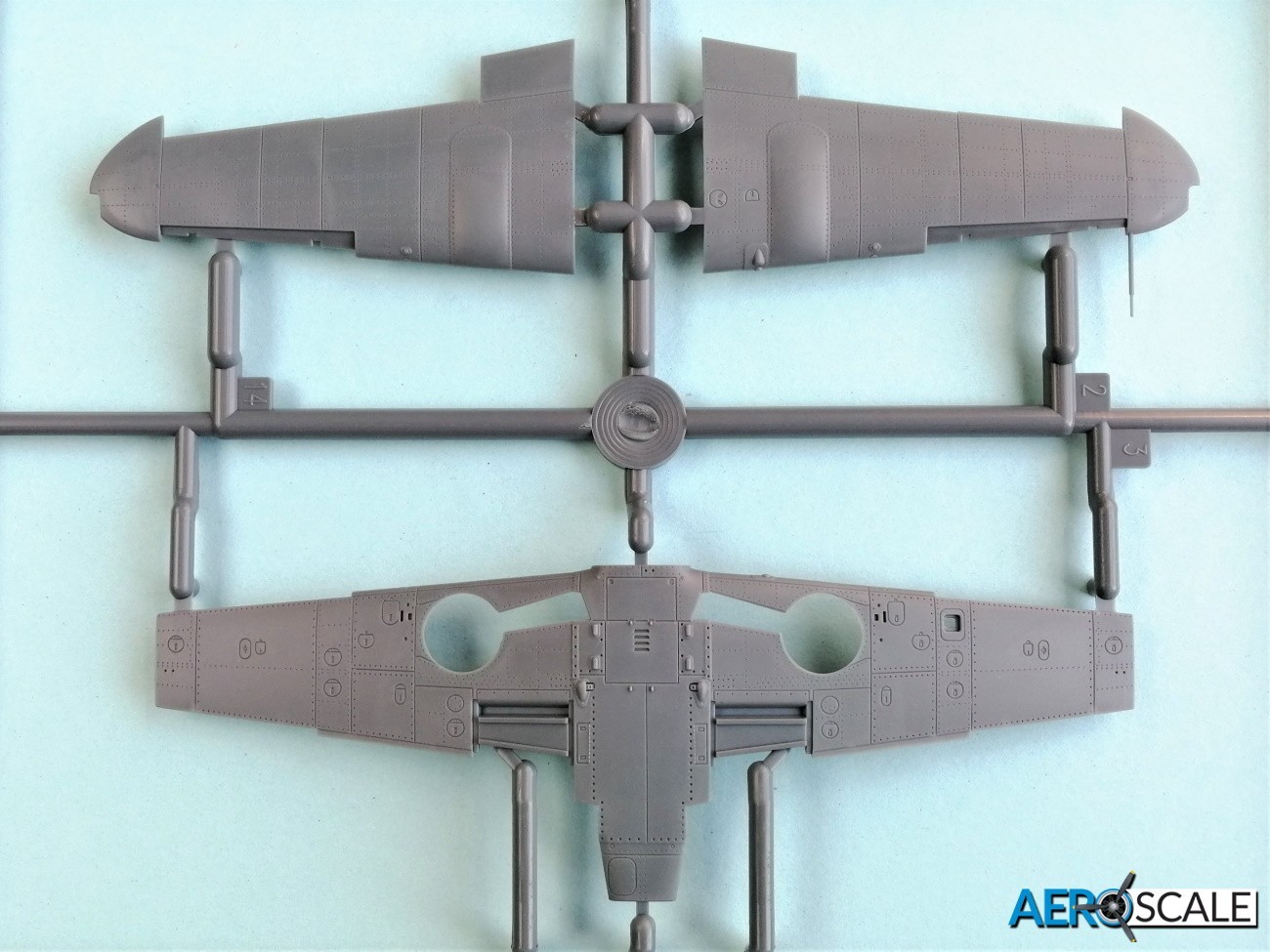 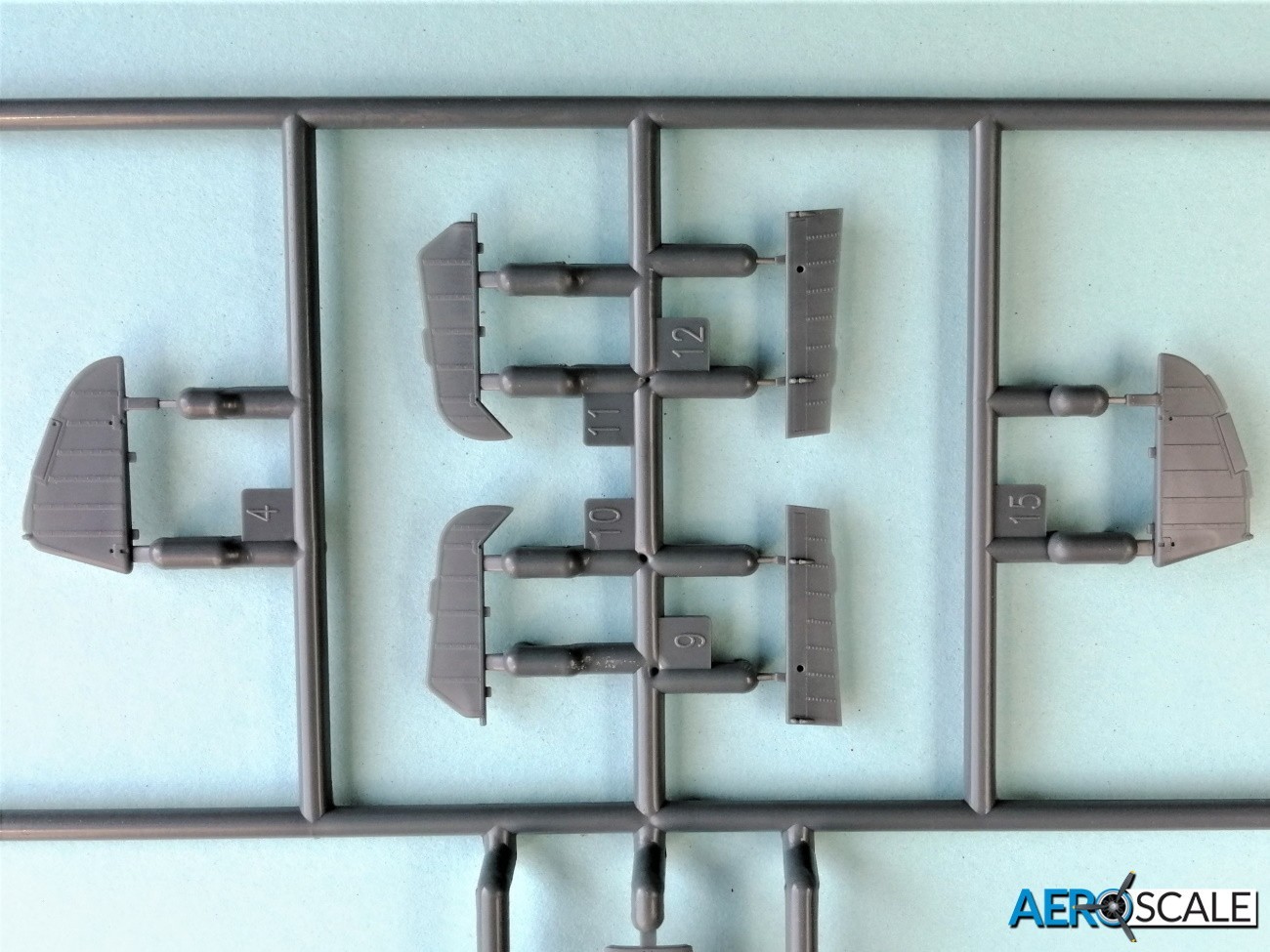 The canopy and windscreen parts are crystal clear. There are separate parts to display the canopy open or closed. The open canopy replicates the instructors and students’ canopies pushed into the centre. So, there is no need to cut the combined canopies. There is additional framing to add either PE or plastic to the inside of the canopies. There are paint masks for the canopy and windscreen. 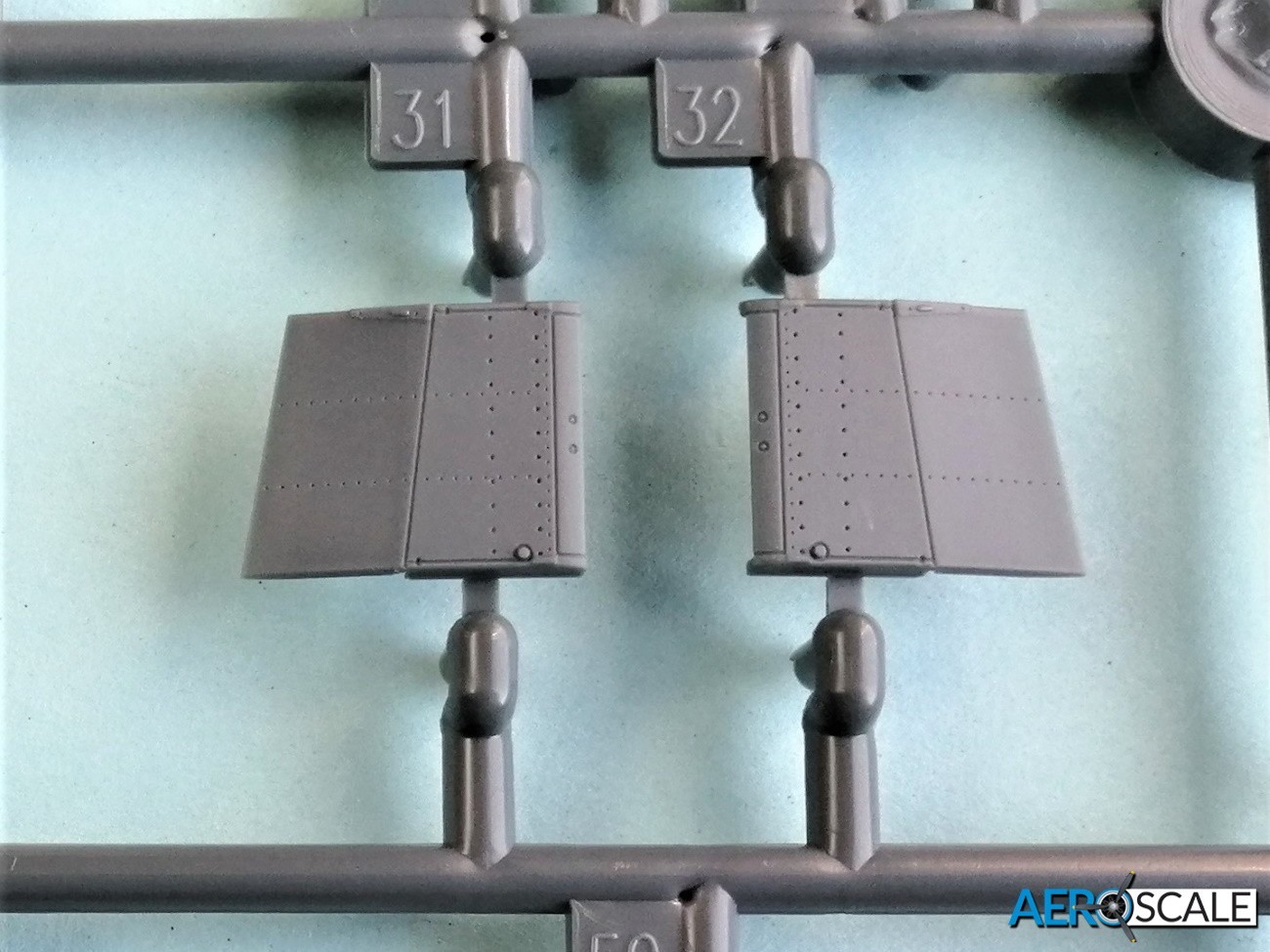 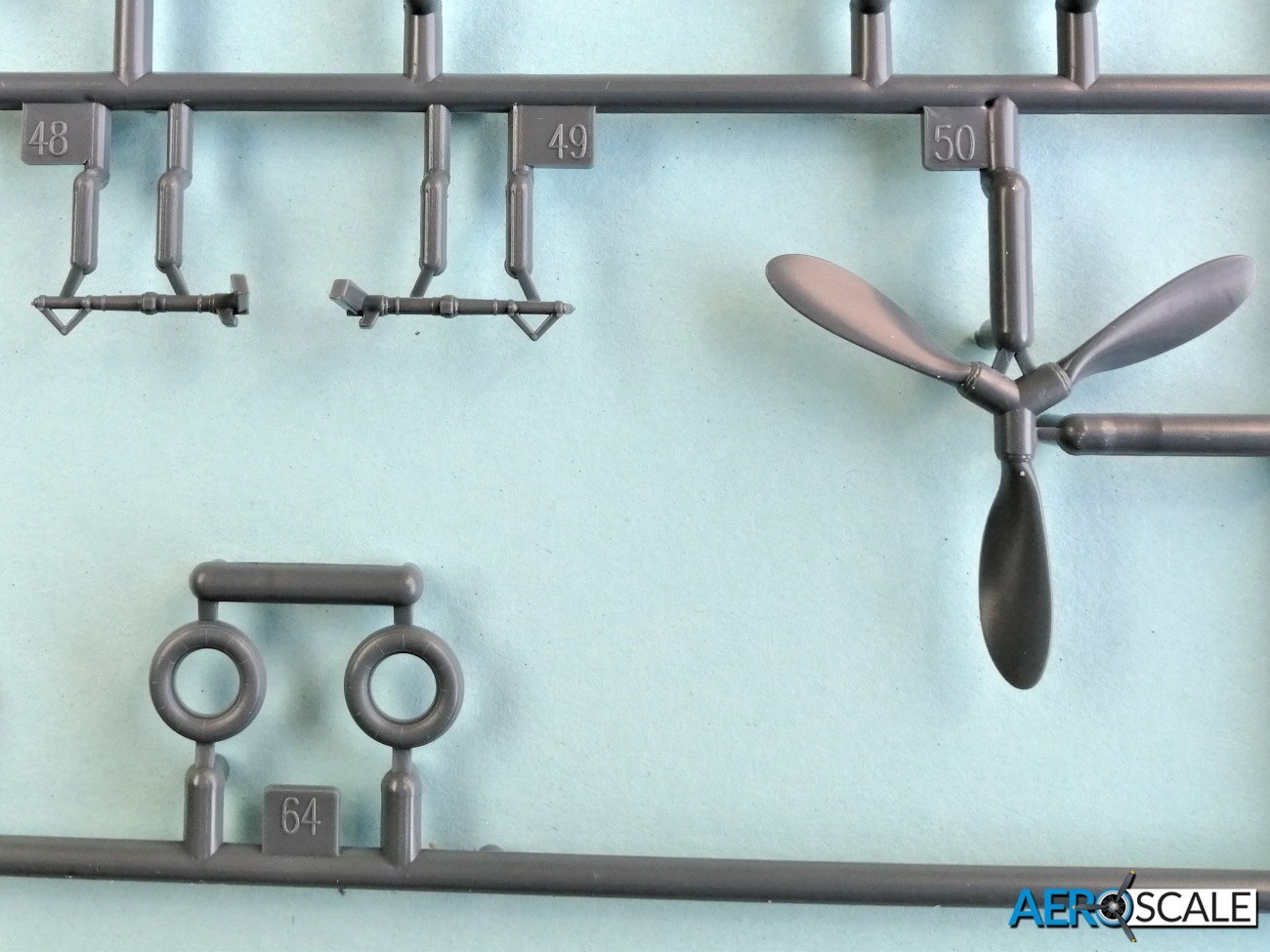 The fuselage is split left and right and there is a separate cover over the upper fuselage canons and another separate panel under the engine bay. The one-piece tailwheel needs to be fitted before the fuselage halves are joined. There is a choice of two one-piece rudders. One of them appears to have three trim tabs.  There is a choice of canon bulges on the side of the nose. The supercharger intake is two-piece. The impressive looking broad paddle propeller comes with separate boss and back plate. A two-part fuel tank fits onto a separate mount under the fuselage 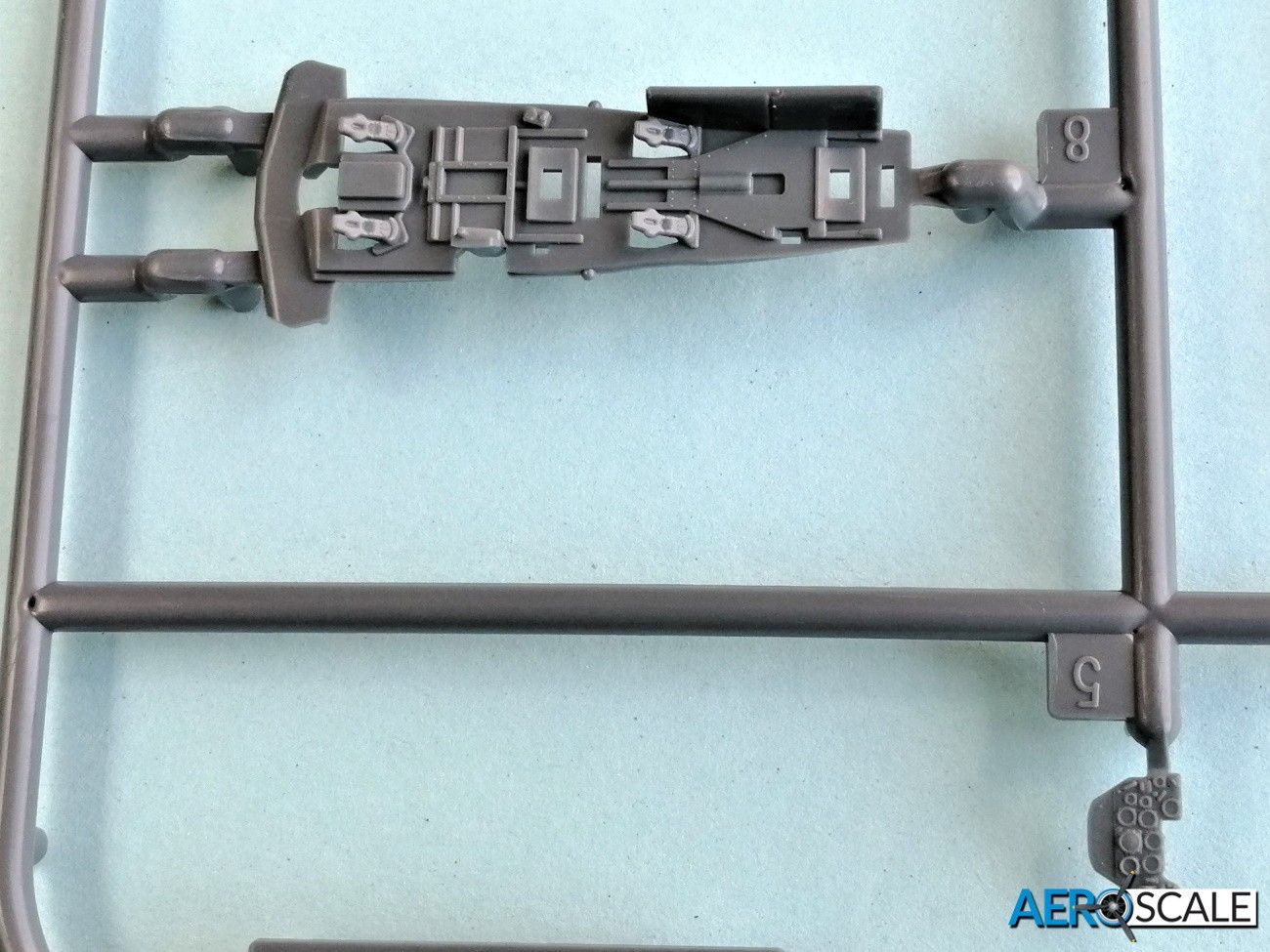 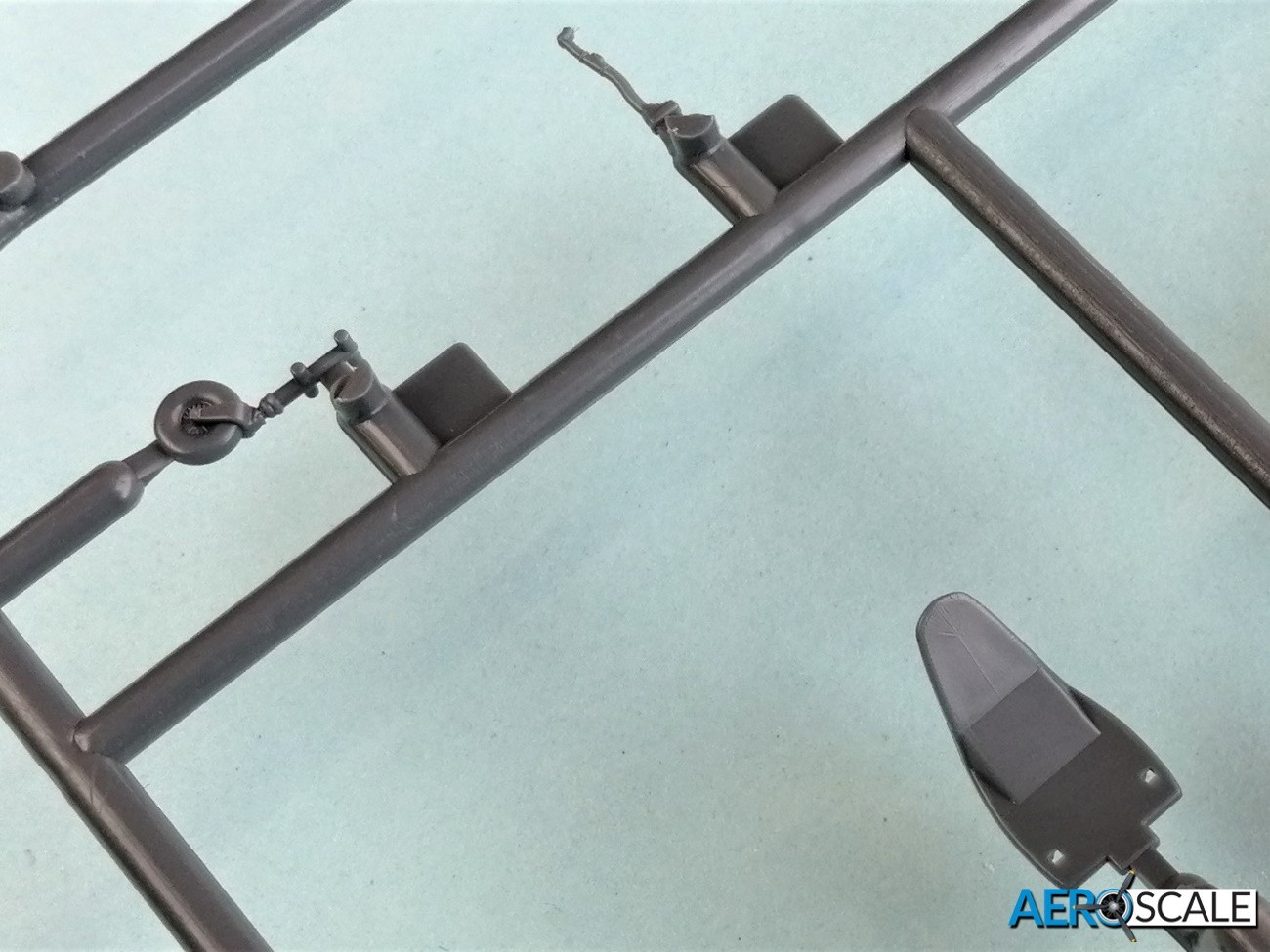 The main wings are three pieces with the lower halve being one piece. Its not quite full span as the wing tips are moulded with the upper halves. The walls of the main undercarriage are each one piece and must be fitted before joining the wing halves. The ailerons, flaps and slats are separate. The flaps are designed to be dropped. Also separate are the fairings for the radiators. Being a ProfiPACK means there are PE radiator faces fore and aft. Unusually the flaps to the rear of the radiator fairings can be positions simply by bending them to match the incidence of the wing flaps. No armament is fitted to the wings. 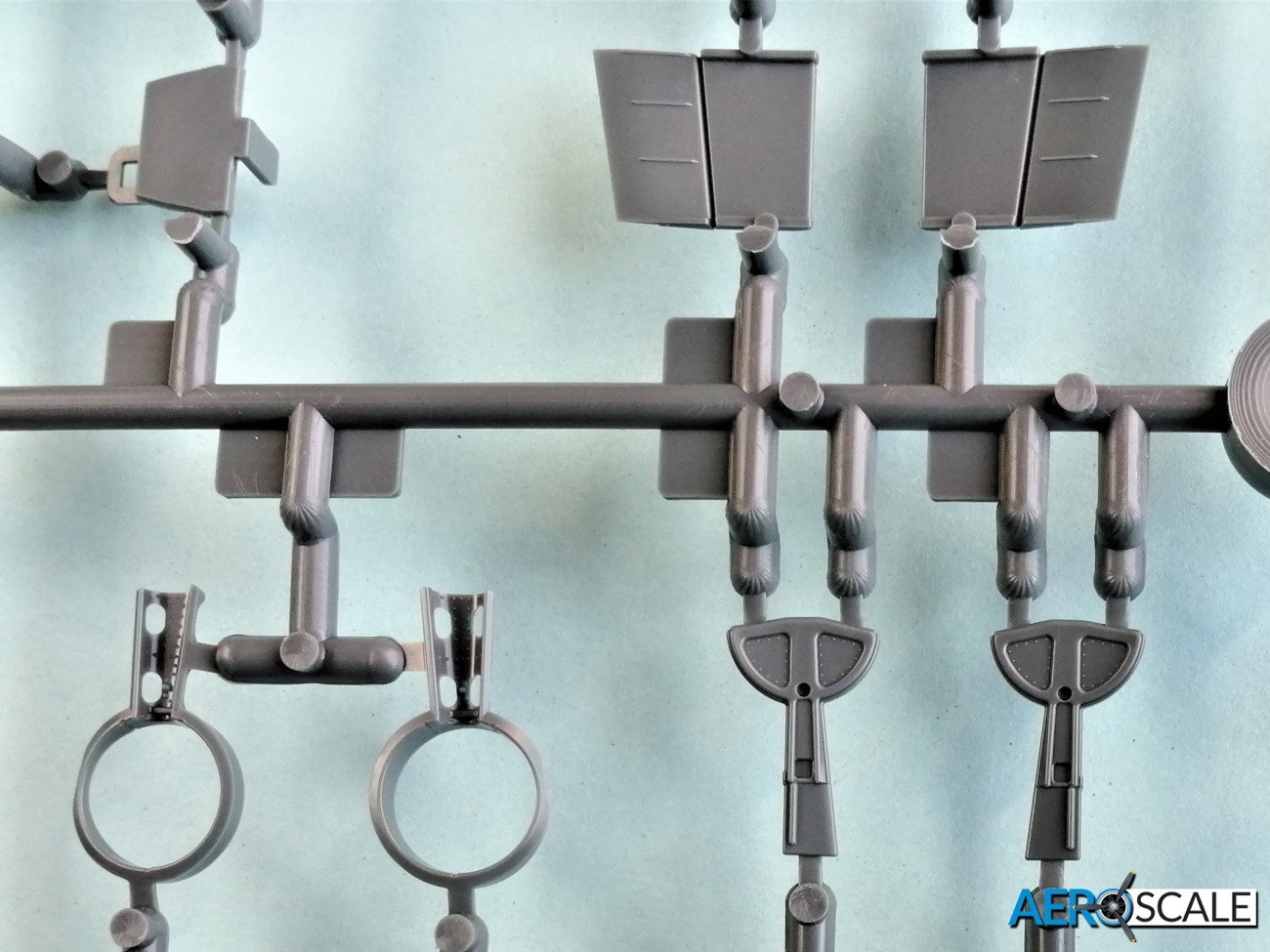 The tailplanes are each two pieces, with one-piece elevators. The control surfaces appear to be fabric covered, though the rib tape is slightly overdone. 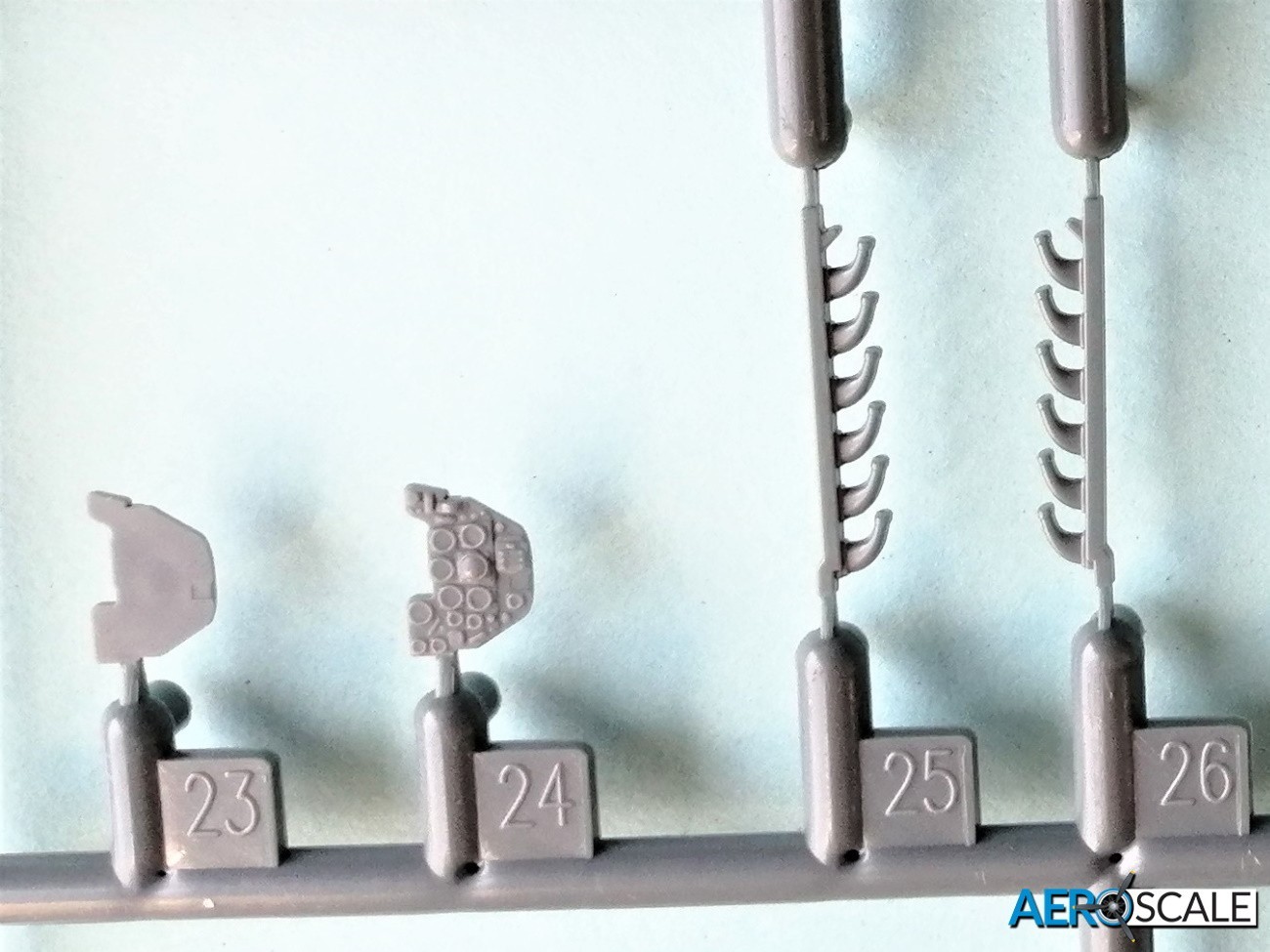 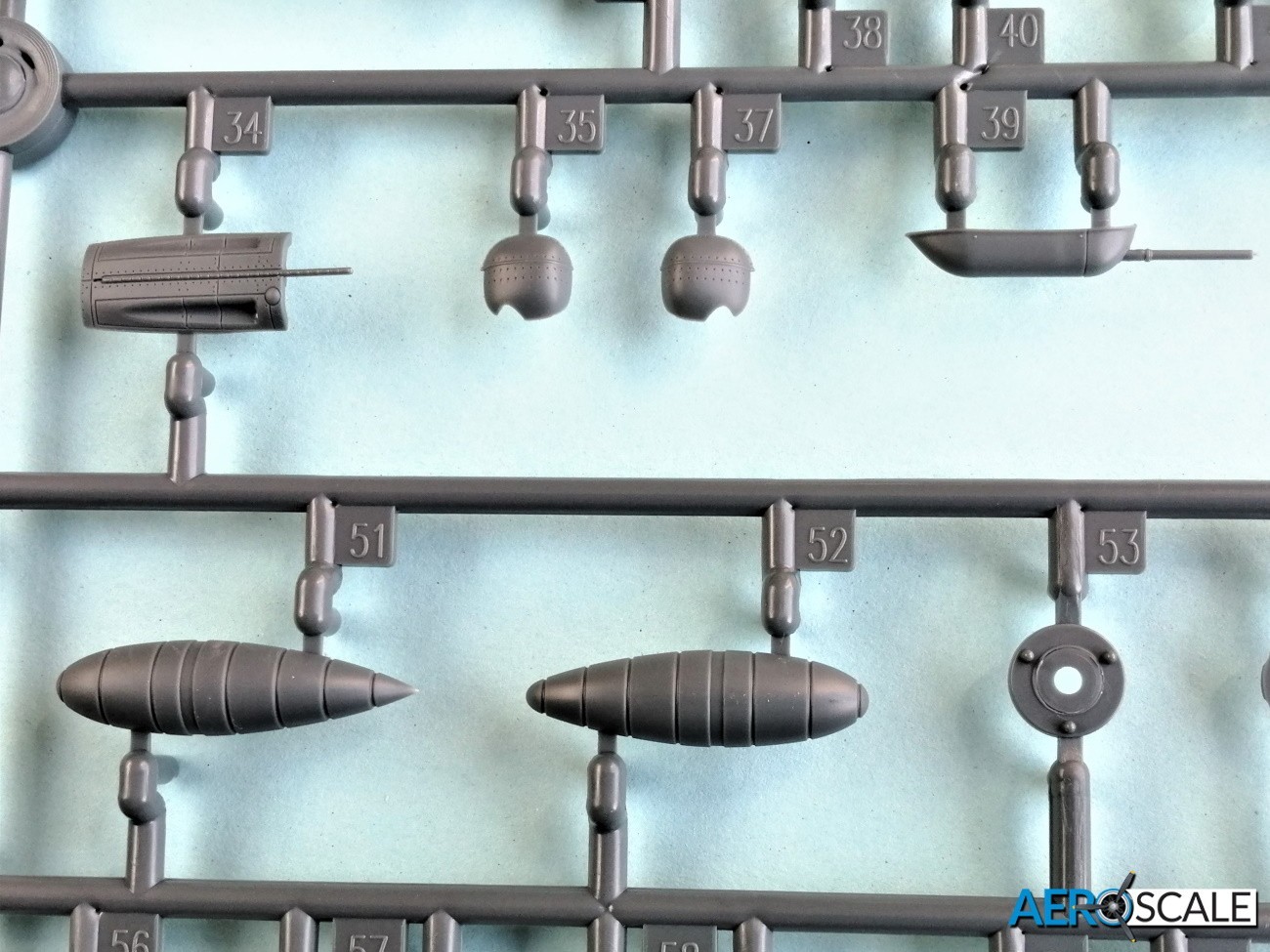 The legs of the main undercarriage has some nice detail and there is a large tab at the base. This slides into the fuselage providing a strong join and also sets the angle for the legs. PE hydraulic pipes are included for each leg. There are two choices of tyre: with tread or slick. There is a choice of hubs although it’s up to you to decide which ones you fit. The detail on the undercarriage doors is super particularly on the inside. Included are paint masks for the hubs. 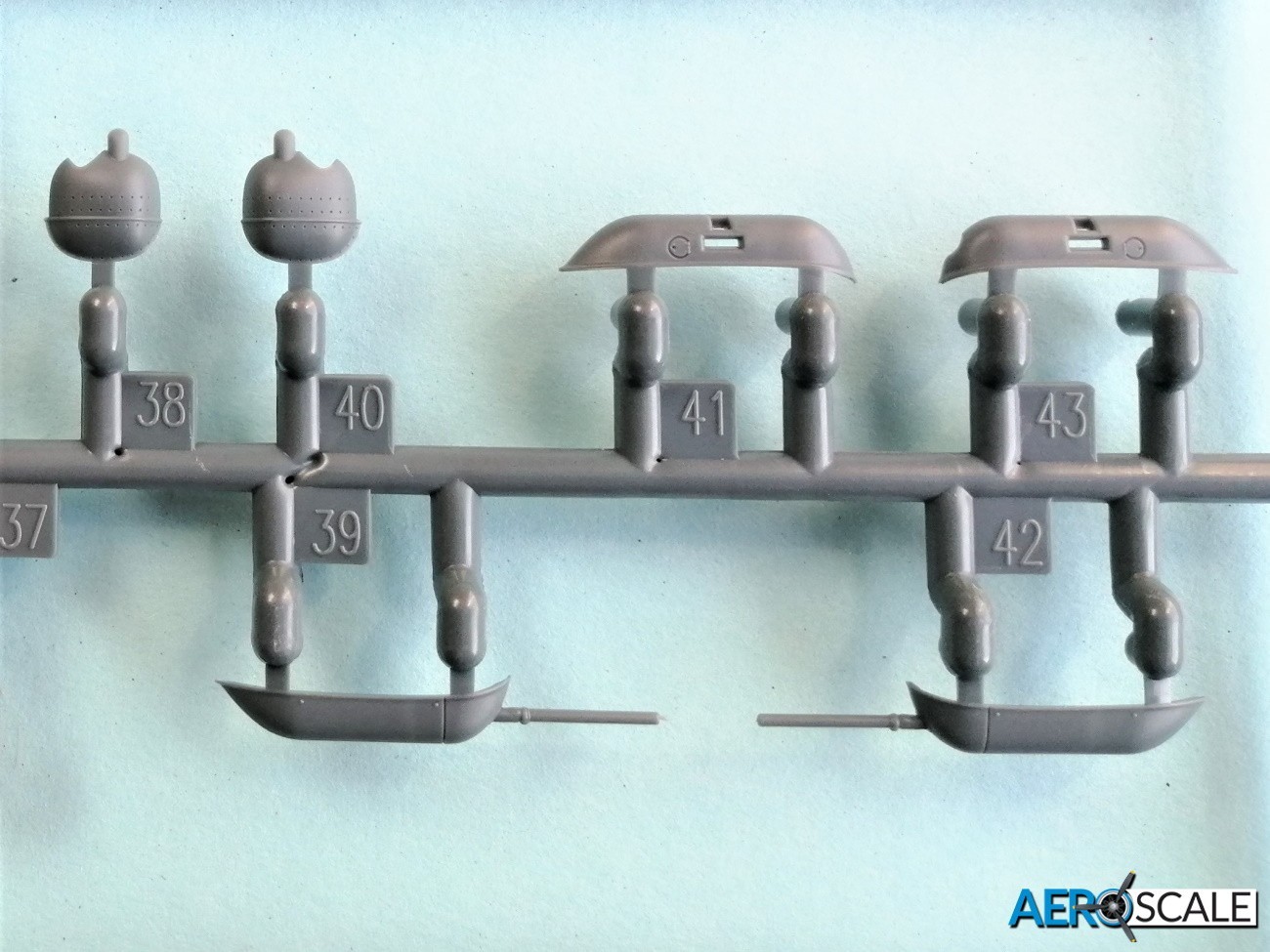 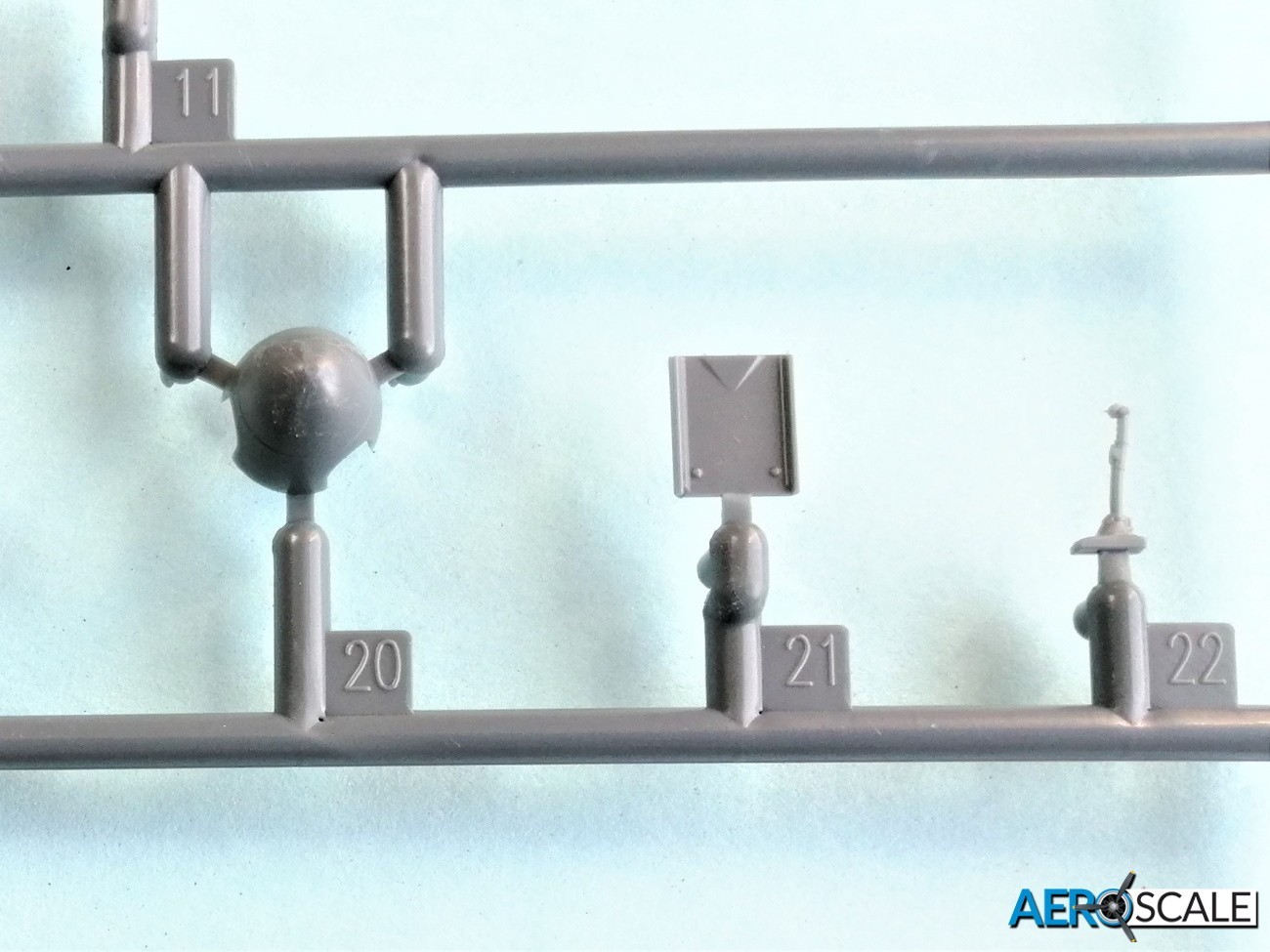 The vast majority of pre-coloured PE parts are intended for the cockpit. There are radiator faces rudder push rod and brake hydraulic lines for the undercarriage are also included.

Paint masks cover the clear parts on the canopy and windscreen as well as the main wheel hubs.

There are two small decal sheets produced by Eduard. The larger sheet has insignia and aircraft marking and the smaller sheet has stencils. The decals themselves are thin, glossy, with excellent registration and colour density.

All the aircraft were painted aluminium and they are not left natural metal. 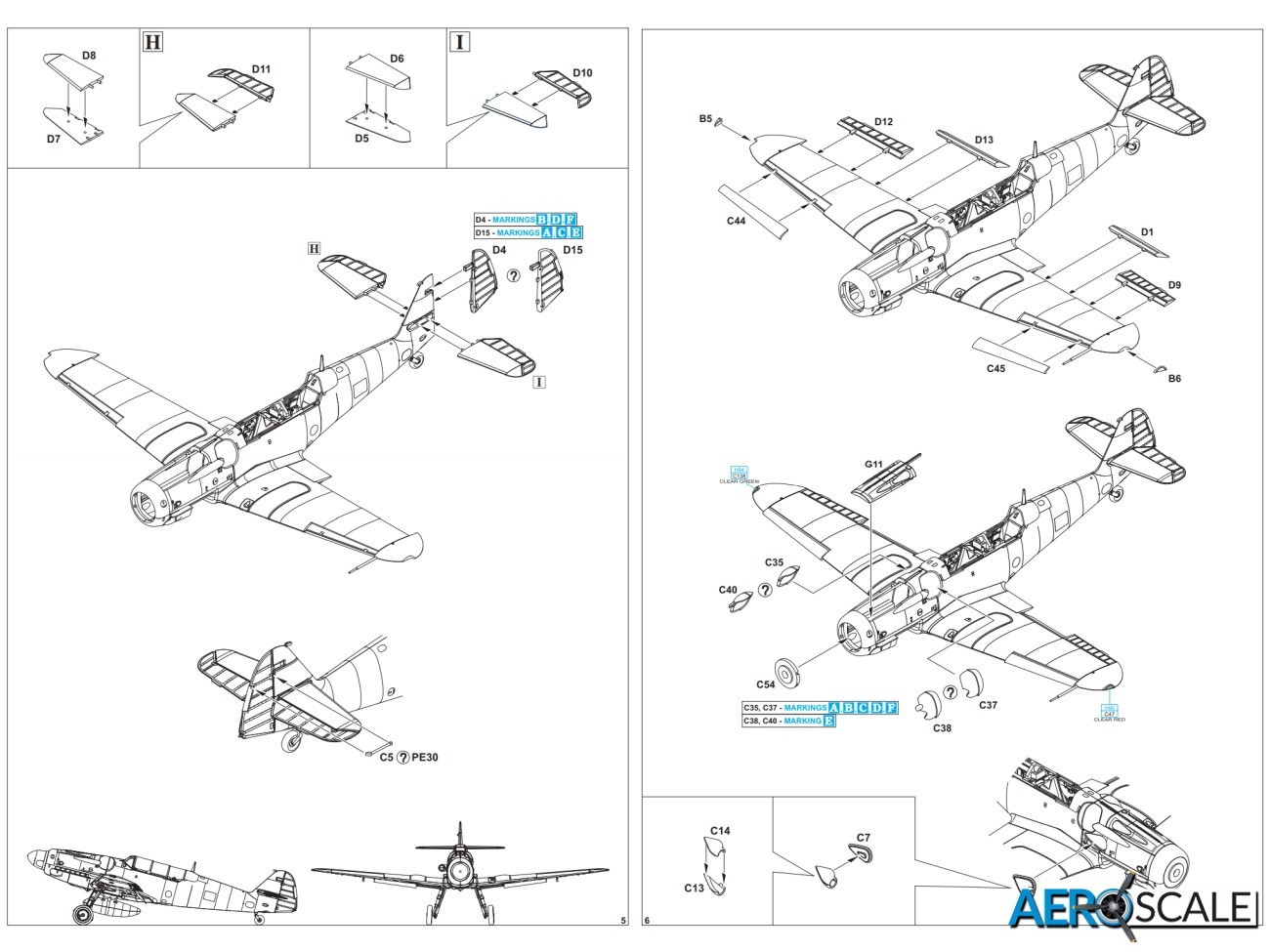 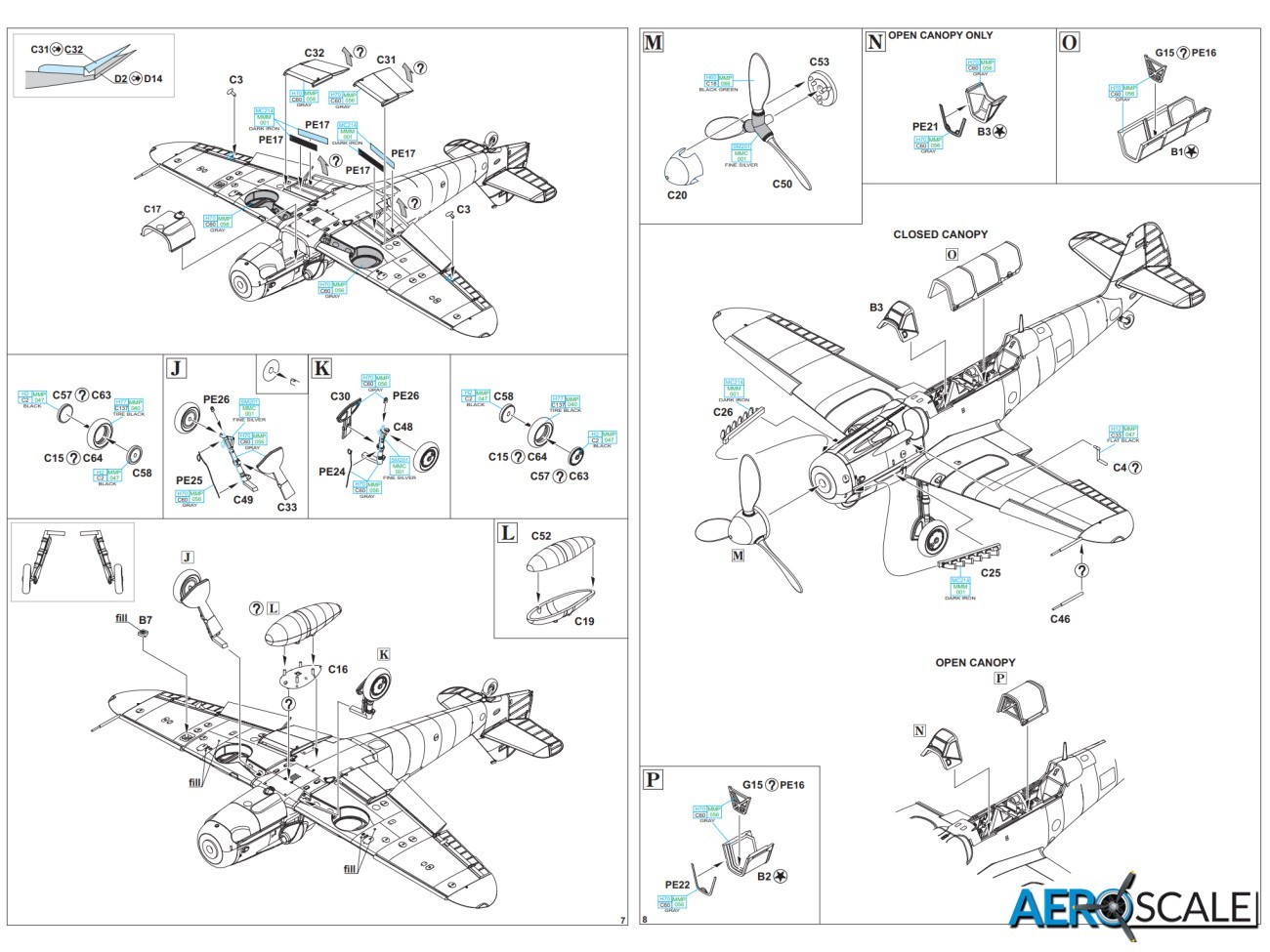 The sixteen-page construction guide is pretty straightforward. There are a few variations to watch out for during construction depending which marking option you go for. The paint guide features four views of each subject and there is a separate page stencil guide. Gunze Sangyo and Mission paints are used for reference, but it is simple enough nowadays to cross reference these with your favoured paints. 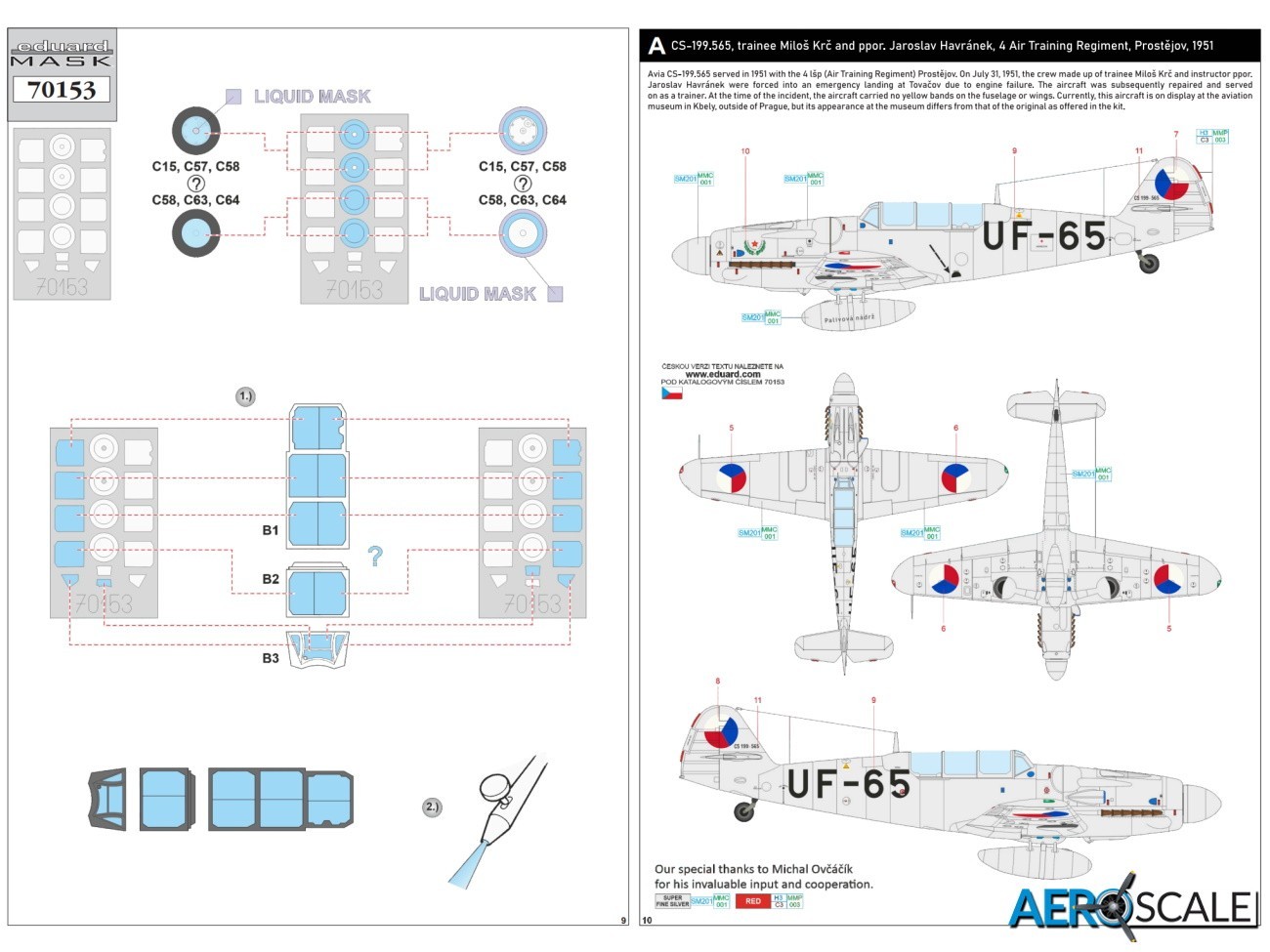 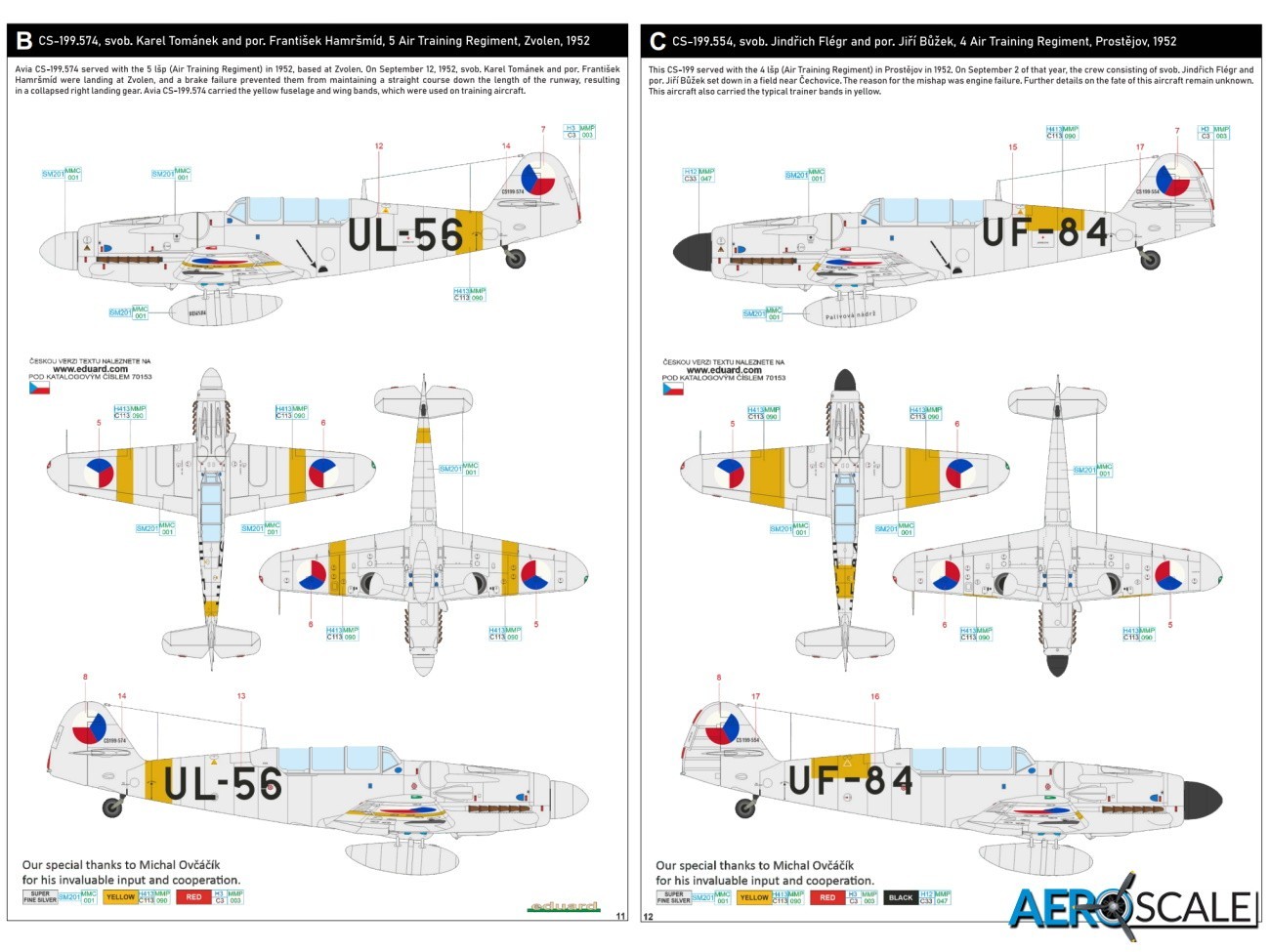 The 1:72 scale Avia CS-199 trainer is another stunning release from Eduard and is a natural follow on to the release of the S-199. The detail in the plastic is right up there with Eduard’s high standards and there is also the bonus of the pre-painted PE too. There were a few murmurs on social media about the lack of 1:72 scale releases from Eduard recently. This has been worth the wait. Highly recommended. 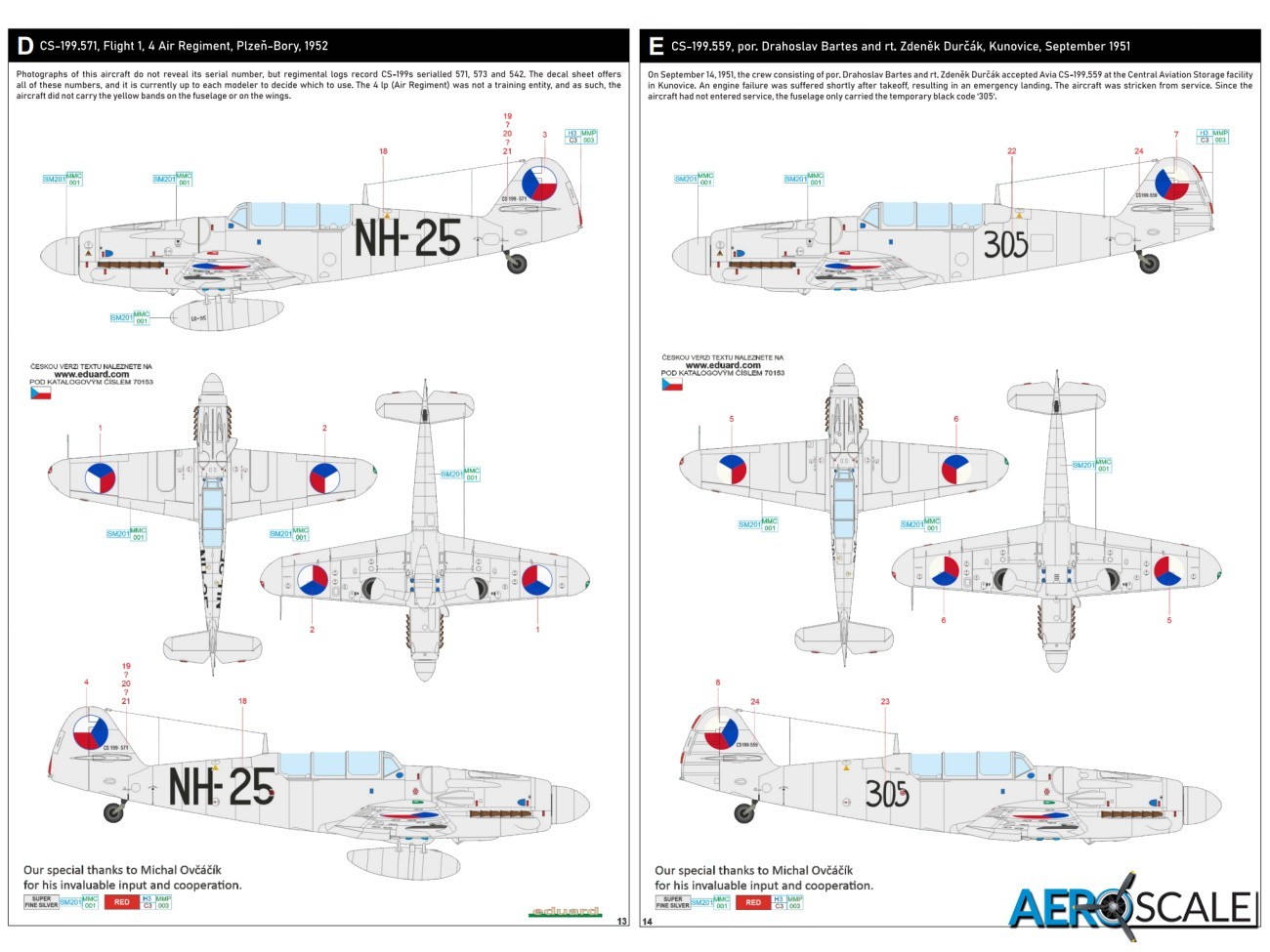 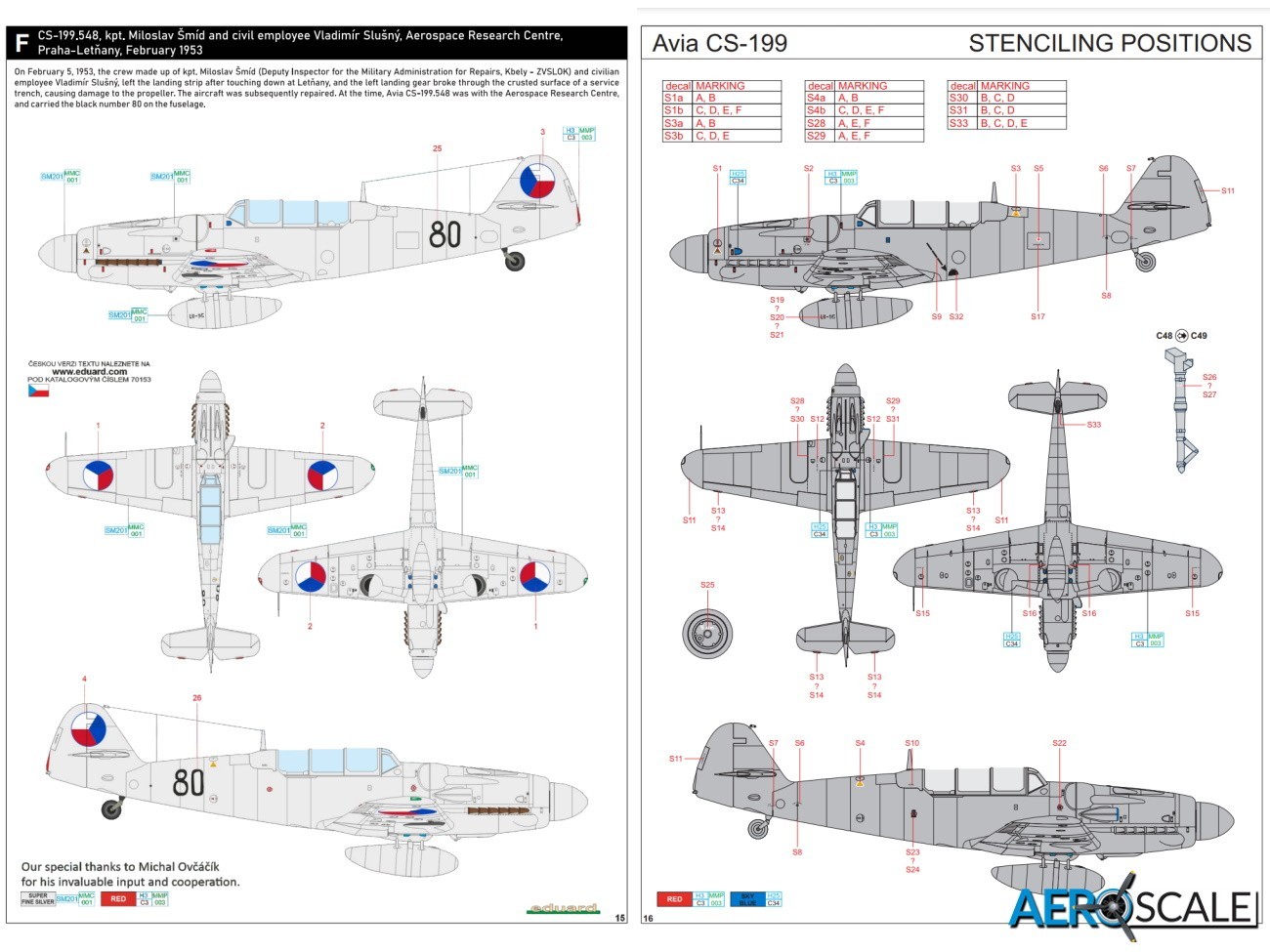 Our thanks to Eduard for the review sample.