Darren Baker
Editor
posted on 1 month ago
367
views
Here we take a look at a World War II Allied Pilots in the Cockpit (British, American and Soviet) from ICM in 1/32nd scale. 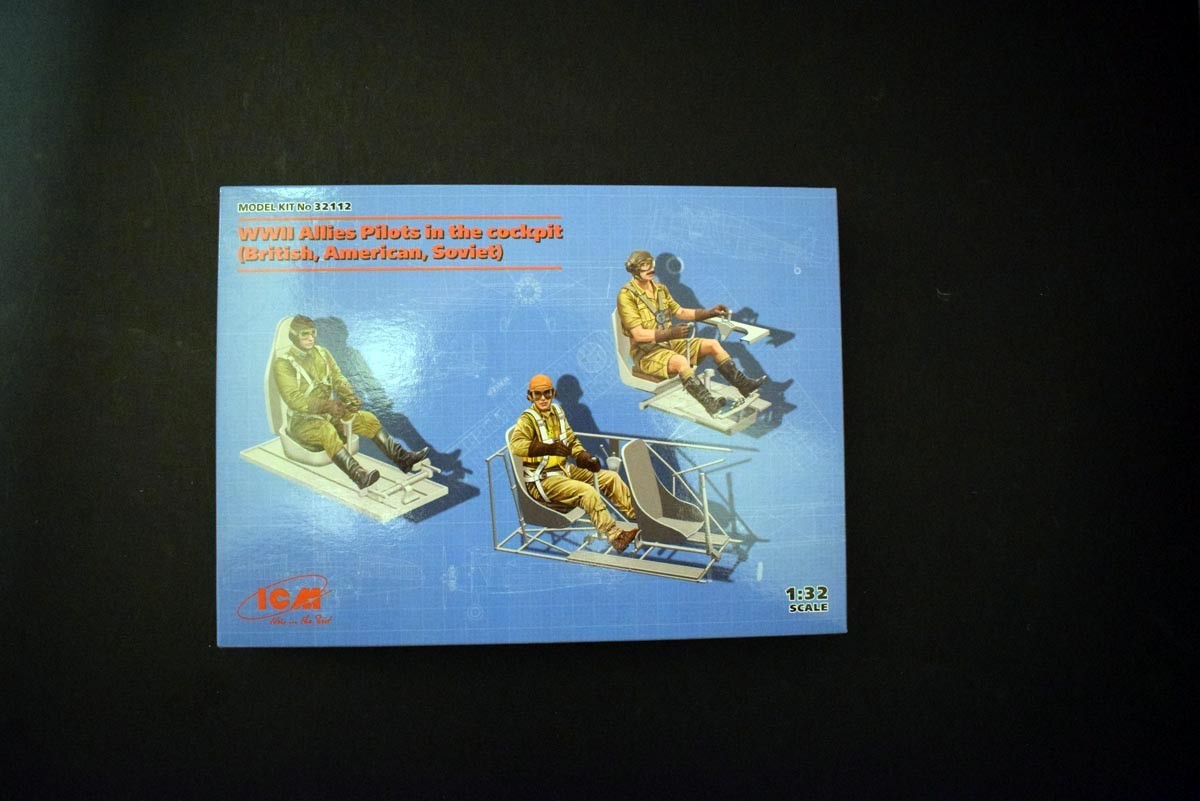 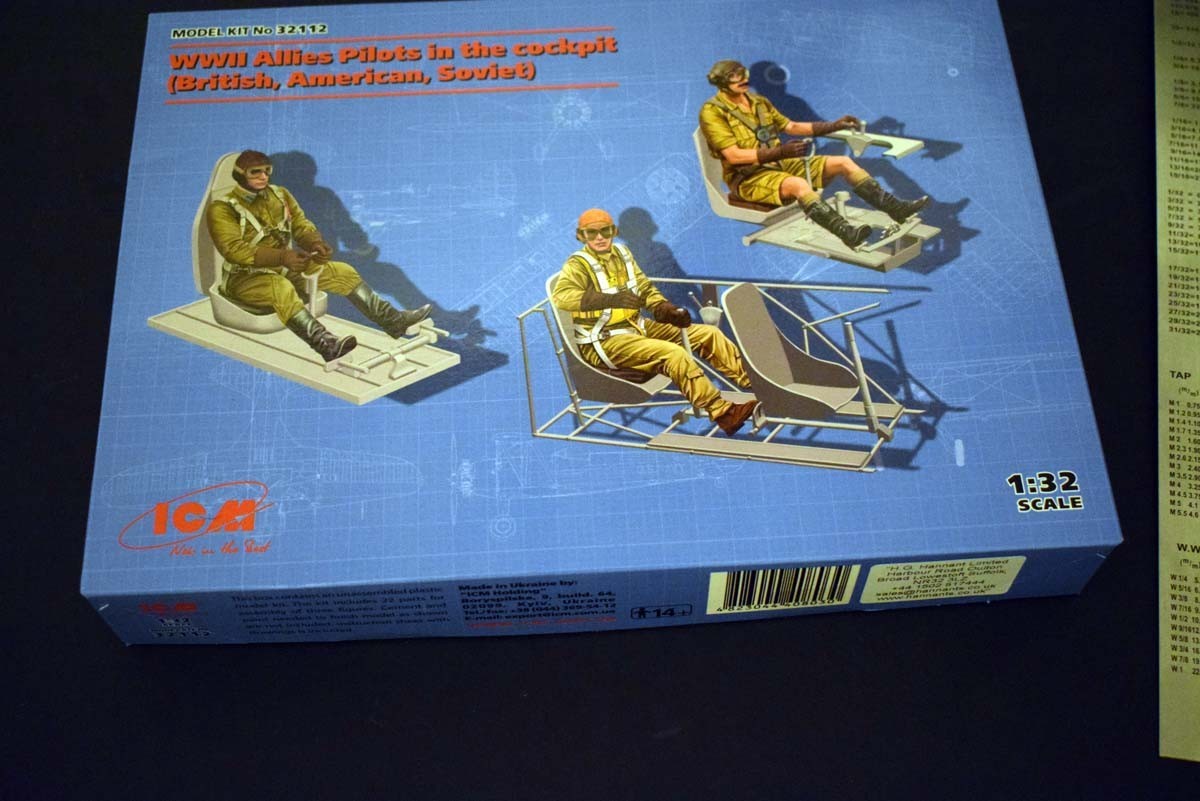 ICM has released a number of 1/32nd scale aircraft covering many different national air forces during WWII. A common issue with ICM 1/32nd scale aircraft kits is the lack of harness detail in the cockpit that really stands out in this scale. To overcome the issue, you either need to be looking at aftermarket sets, or sourcing a pilot to place into the cockpit. A new release from ICM presents a possible answer to the harness issue, where WWII Allied air craft are concerned. So let’s take a look at this offering from ICM.

This offering from ICM is provided in a typical flip top cardboard tray, with a card lid showing the artwork for the contents. Inside there is a single plastic bag containing a grey sprue, and loose in the book is an assembly and painting instruction sheet. An examination of the sprue reveals very cleanly moulded kit parts, without obvious moulding seam lines.

The figures provided in this release are intended for the Gloster Gladiator for the British pilot, for the Stearman PT17 for the American pilot, and I believe the I16 in the case of the Soviet pilot. The British pilot is wearing tropical gear, and it should also be stated that the figure could represent a British or Commonwealth pilot of the period in the region indicated. Looking at the pilots as a whole, I cannot see any obvious issues with the detail, with good crease detail and so far as I am able to ascertain uniform detail. The parachutes provided for each figure and which are sat on are all different and while I am no expect in parachutes, I appreciate the detail even though it will not really be seen.

Moving on to the hand and face details, the hands are very good with excellent detail, especially when you consider that all of the pilots are wearing gauntlets. I do not believe that any modeller will have an issue with these aspects of the kit. Moving onto the heads, the flying helmets are moulded in situ, and so are the goggles which if I am honest, I would have liked to have seen offered in clear plastic and so providing a better representation of the face. With that said, nose, mouth and general facial features are very good, with the moustache being especially well done, in the pilot indicated as being British.

This offering from ICM covers up ones of the biggest weaknesses with ICM’s aircraft kits in 1/32nd scale, with that being the lack of seat harness detail. The moulding quality of the figures is very good, especially in the case of uniform detail, and the hands that are in gauntlets. I will say that I am disappointed in the goggles on the figures, not having been provided in clear plastic, but what is seen of the face is very good, especially the moustache. One thing that I finally have to congratulate ICM on, is the cleanliness of the moulded parts. 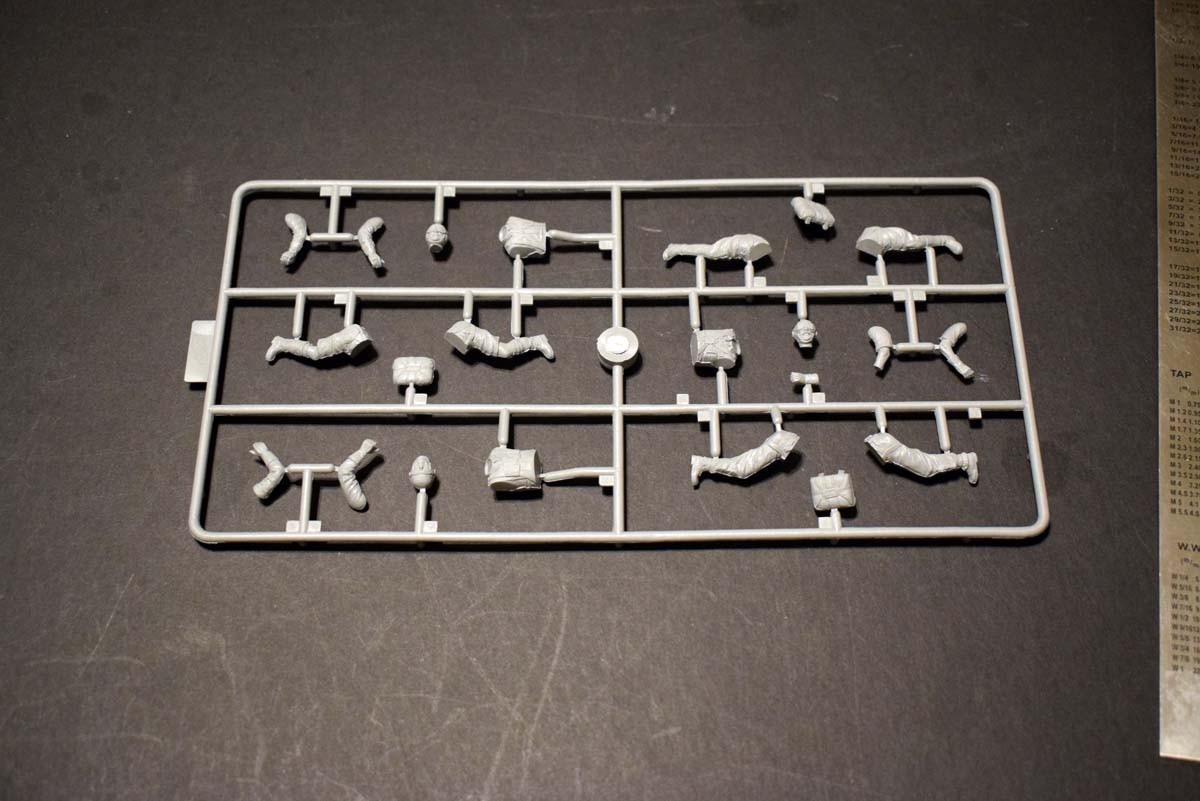 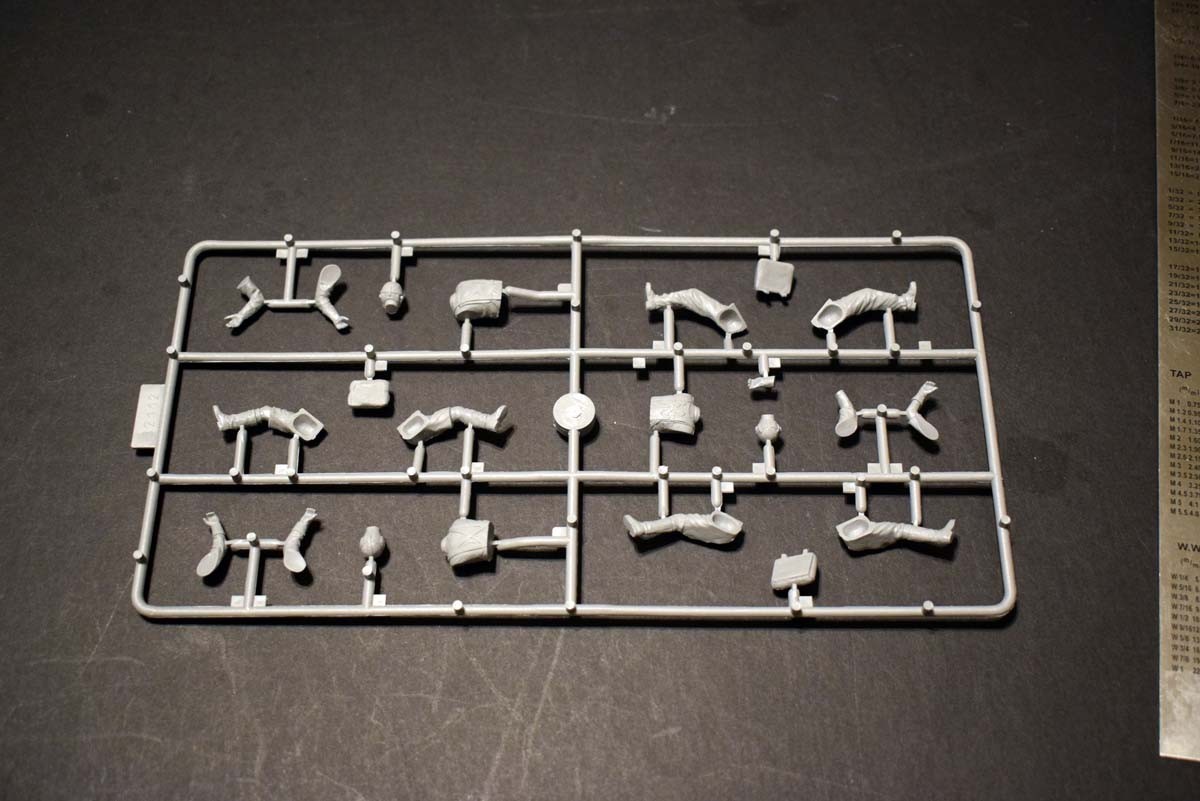 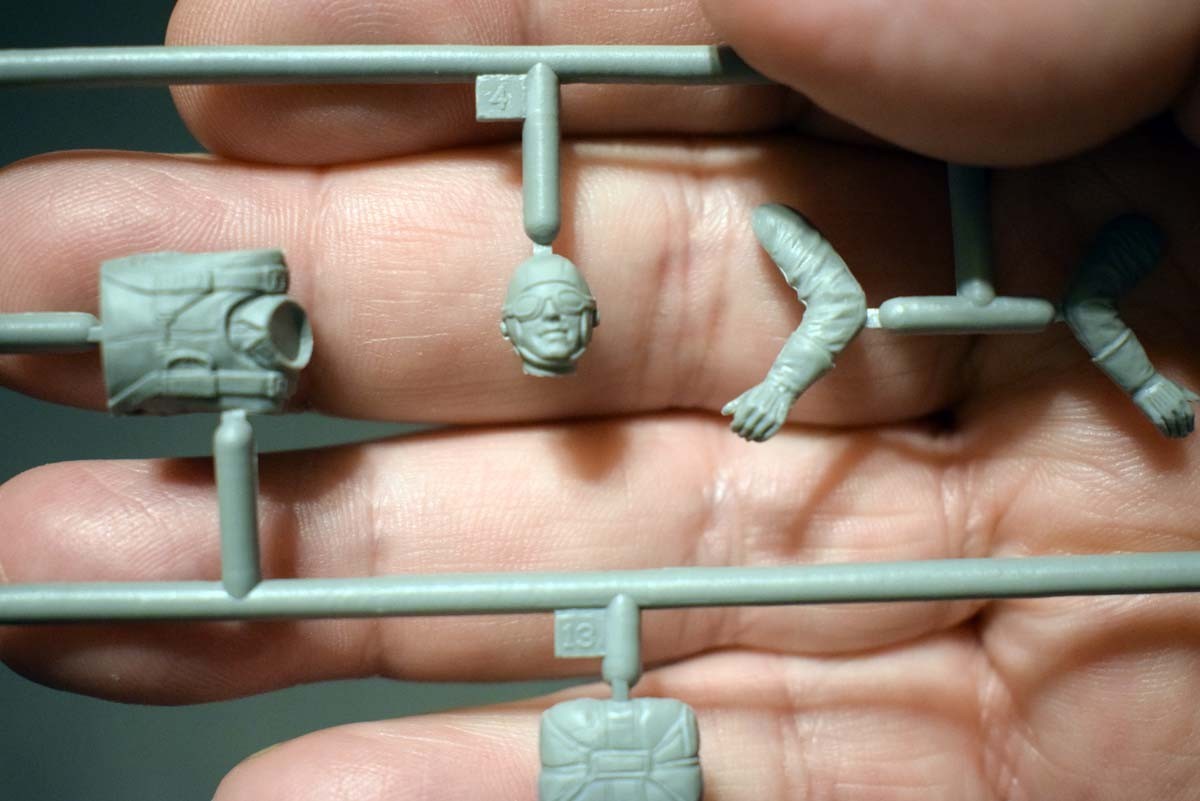 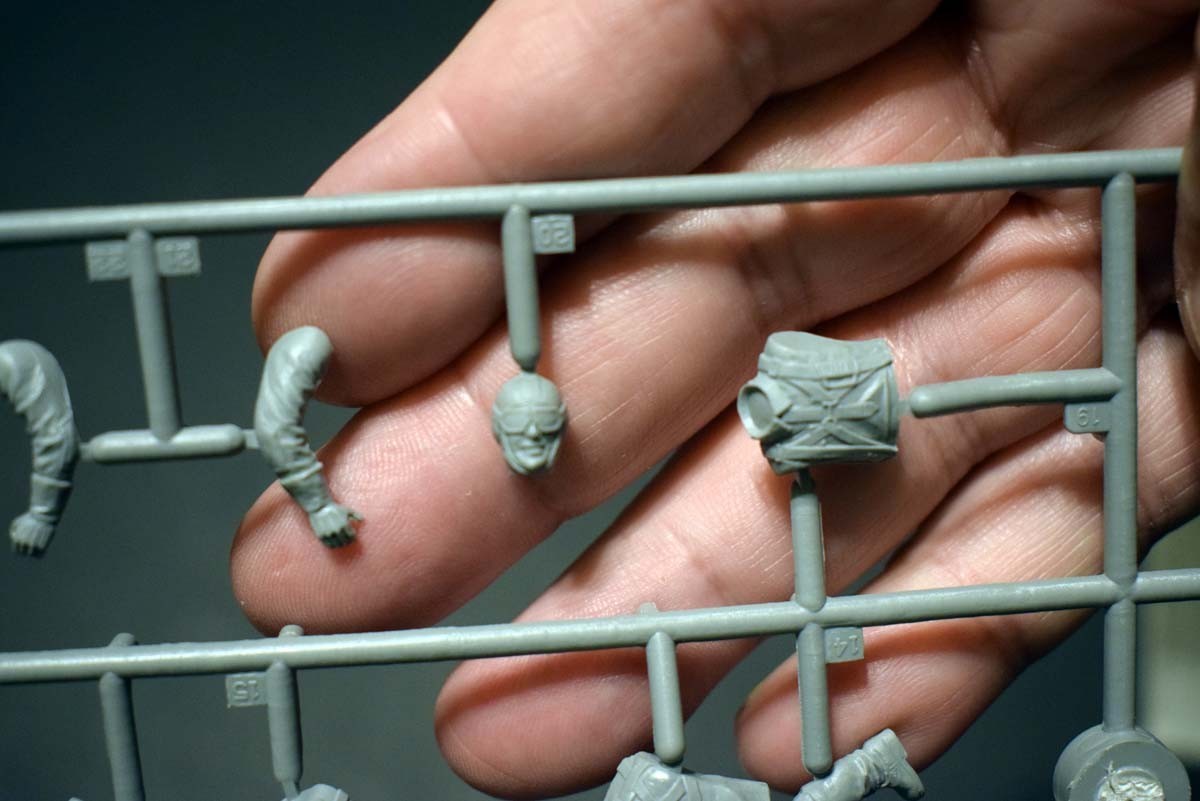