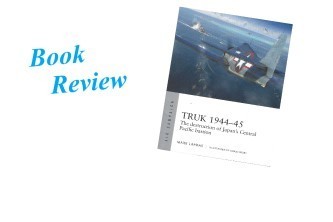 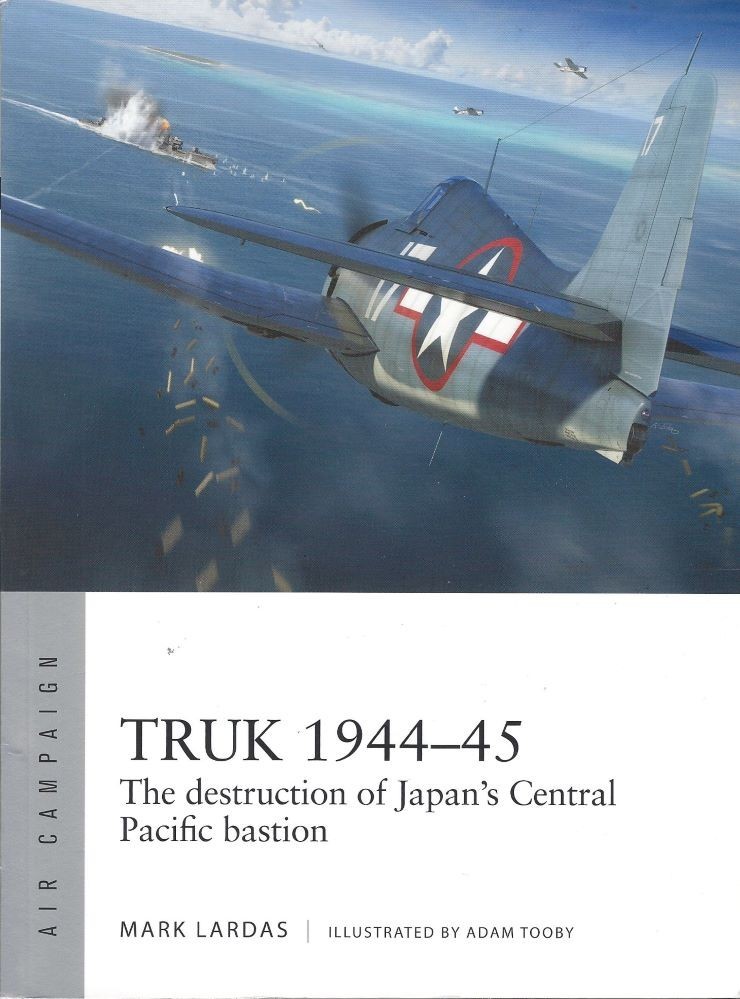 Authored by Mark Lardas and illustrated by Adam Tooby, this softcover book is cataloged with Osprey’s short code ACM 26, and with ISBN 9761472845856.   It is also available with different ISBNs in PDF and ePUB formats.

Truk.  A name that tormented Allied planners until the last phase of the Pacific War.  “Japan’s Pearl Harbor” or the “Gibraltar of the Pacific” was the belief.  Little was known about Truk since Japan took possession of it after the First World War, and the expectation was that Japan developed Truk into a heavily fortified major naval and aviation base.  Indeed, Truk hosted a significant garrison, multiple air fields and was the home away from home of the Japanese fleet, with super battleships Yamato and Musashi frequently staging there.   Most of Japan’s naval offensives and support of their war for the Solomon Islands and New Guinea staged through Truk.

My knowledge of Truk was basic.  I knew it was a bugbear and when the US Navy attacked it, success was not considered assured.  This book has expanded my understanding of Truk as an anchor of Japanese conquests in the Pacific, its potential and capabilities, facilities and bases, and the campaign to remove it as a keystone of Japan’s defensive perimeter.   Osprey introduces the book as;

A fully illustrated history of how the US Navy destroyed Truk, the greatest Japanese naval and air base in the Pacific, with Operation Hailstone, and how B-29 units and the carriers of the British Pacific Fleet kept the base suppressed until VJ-Day.

I have looked forward to this title since first finding it on the Osprey site.   Let's delve into it.

Truk 1944-45 is expatiated through 96 pages with over a dozen chapters, sections, and sub-parts:

The ‘Gibraltar of the Pacific'

The book is well organized in Air Campaign’s standardized format.  After seven pages of Introduction and Chronology, this Air Campaign book launches into Attacker’s Capabilities and Defender's Capabilities, 20 pages for this book.  Those focus upon facilities and infrastructure (including aircraft carriers), weapons and tactics, and the main aircraft deployed at, and against, Truk.  Technical data for ships, aircraft, ordnance and other military equipment is frequently included, i.e., size, performance and compliment of HMS Implacable.  Strengths and weaknesses of the opposing forces are recited.  Fifteen aircraft are presented and described in relevant detail.  The importance and capabilities of the US Navy’s aircraft carriers are discussed, as are the natural and man-made features of Truk that led Japan to consider the bastion to be safe.  Next, Campaign Objectives explore and explain why Truk was significant to Japan, and why the Allies feared it and what they planned to do about it.  Truk’s importance to Japan’s defensive perimeter and efforts to protect it removes any doubt of Truk’s value.  The Pacific war was about distance, and the author notes how distance affected Truk’s operations.  This chapter also briefly discusses Truk’s command structure.

The Campaign is the heart of the book, presented through 46 pages.  It is interesting to read about Truk, the League of Nations and Japan's administration of the atoll.  We learn of Truk’s history from 1939 to just before significant Allied attacks began.  It explains Allied preparations to position to attack and occupy Truk, and the stronghold's’s important to Japanese outer bases fighting back against Allied advances.  The main offensive was USN’s Operation Hailstone with air and sea attacks in February 1944.  The waves of attacks are well described, as is damage and losses to both sides.  The long-term campaign to keep Truk beaten down is its own sub-chapter.  USN was perfecting air-sea rescue and almost an entire page details the mission in a callout box.  Truk’s subsequent resilience and affect on the remainder of the war is recounted in Aftermath and Analysis. That chapter also particularizes participating aircraft that survive today.

Overall, the book recounts the neutralizing of Truk in enough detail for one to decide if one wants to read an in-depth account of Truk in the Second World War.

However, the book is rife with typos and mistakes, some minor ( neglecting the OS2U rear machine gun) and some subtle, others serious enough to confuse readers without a fair knowledge of the subjects, i.e., stating the F4U Corsair as armed with eight .50 caliber machine guns, inflated top speed of a bomber.  These include perpetuating the myth that the F6F Hellcat ‘was designed to fight the Japanese Zero - work on the Hellcat began before the war started and significant modifications had been decided upon before the first Zero was captured and inspected.

Substantial mistakes credit the 7th Air Force with destroying Japanese air power in New Guinea (it was the 5th A.F.) while the 11th A.F. in Alaska is named improbably as part of the bombing campaign against Truk.  (If they actually did, please inform me.)  The map Pacific Theater 1944 depicting bases mislabels the status of most of the bases, and even shows Kure, Japan, as being captured by the Allies in 1944.  Some more than others, these errors can confuse and misinform readers.  There are other issues that I just can’t put my finger on or don’t feel like typing up.  I sympathize with the author as I know that my descriptions of some technical terms outside of aviation must bring chagrin to armor and naval experts.  Whether the problems discourage potential readers’ confidence in the rest of the content remains to be seen.

An excellent gallery of photographs enrich the text and only a handful of pages lack an image.  The author enhances the text with original wartime drawings, e.g., original wartime US intelligence drawings of a Japanese pillbox showing a frontal view, cutaway, and plan view, keyed with parts and components. Several combat shots are included.

3. The Sinking of the Oite, February 17, 1944: two-page battlescene illustrating destroyer Oite as she takes a torpedo hit, from the vantage point of a strafing F6F Hellcat.  Narrated with a half-page callout box.

4. The Empire strikes back, February 17, 1944: two-page battlescene illustrating carrier USS Intrepid as she takes a nighttime torpedo hit as seen beyond the B5N “Kate” attacker.  Narrated with a half-page callout box.

B. Truk Atoll: detailing the islands, reefs, bases, passages, and bases and facilities.

Maps orient the reader and the artwork offers views the photographs did not capture. 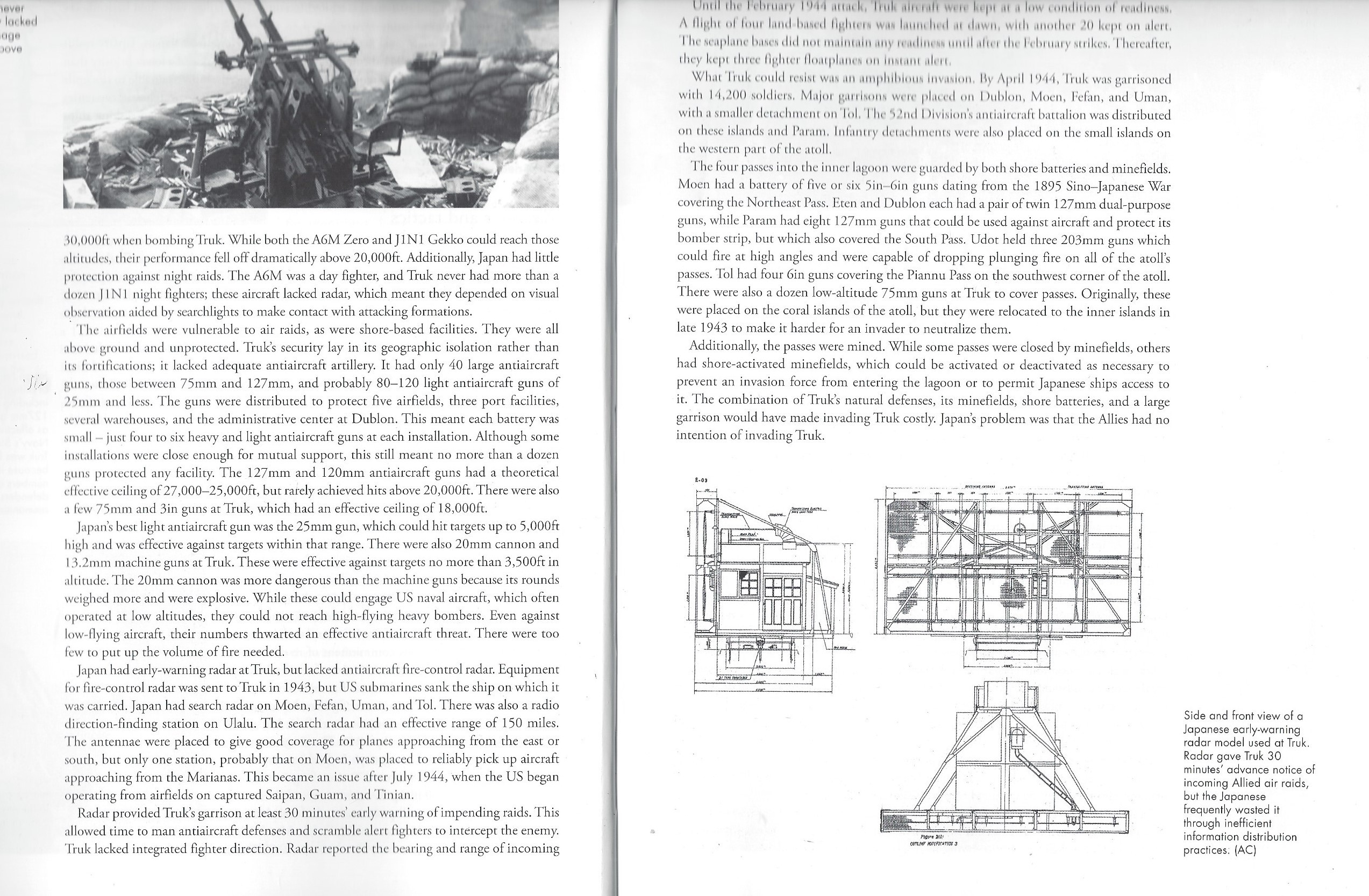 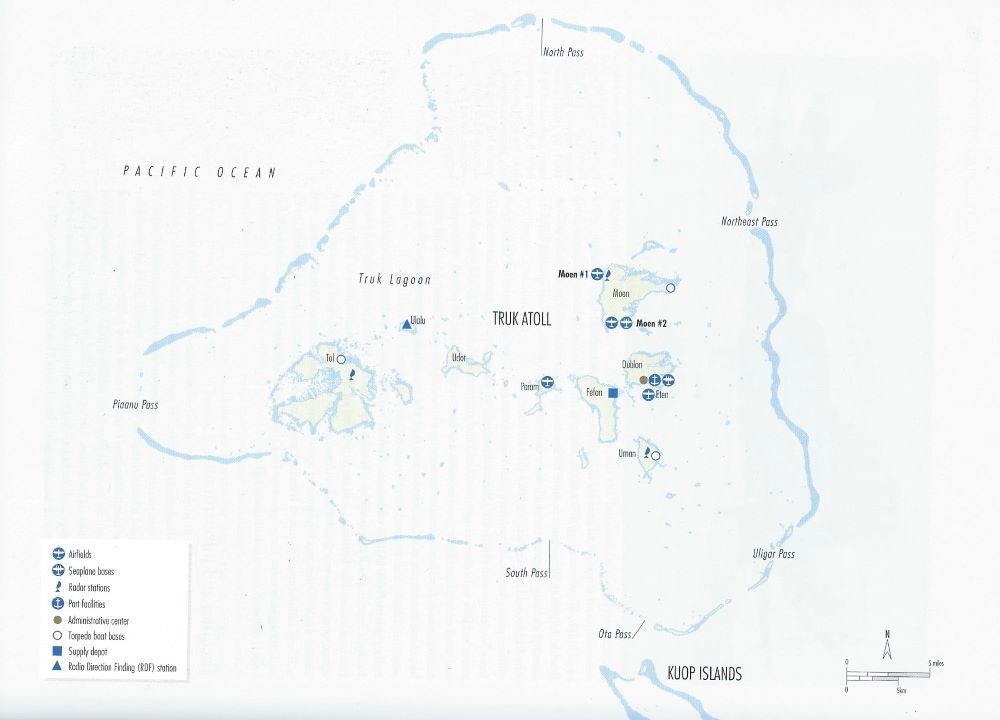 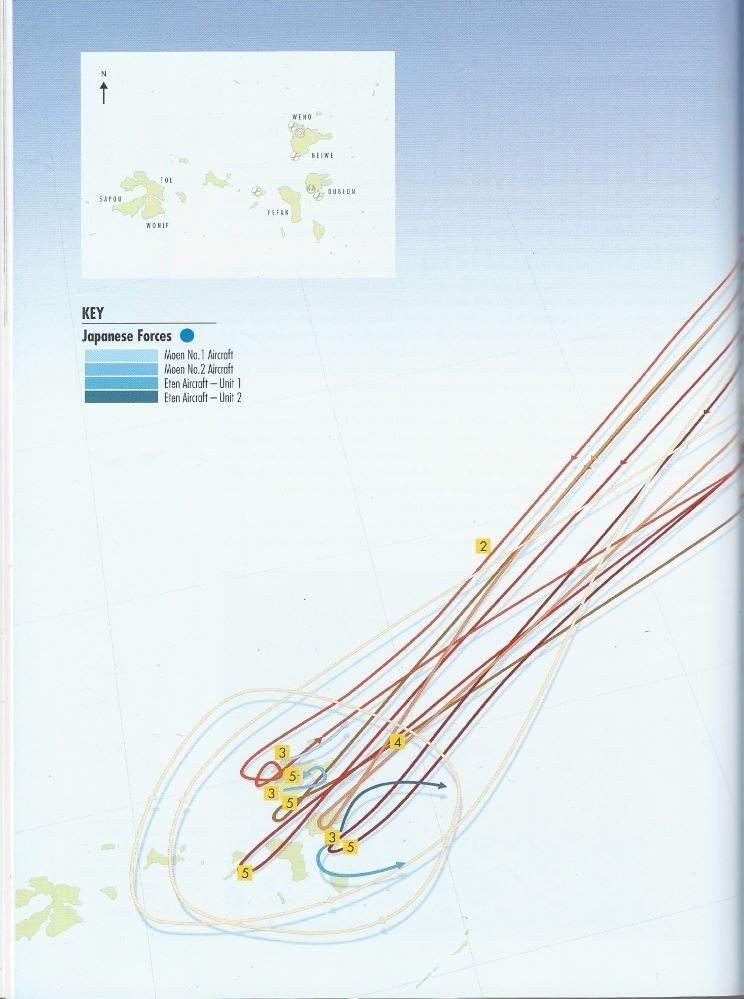 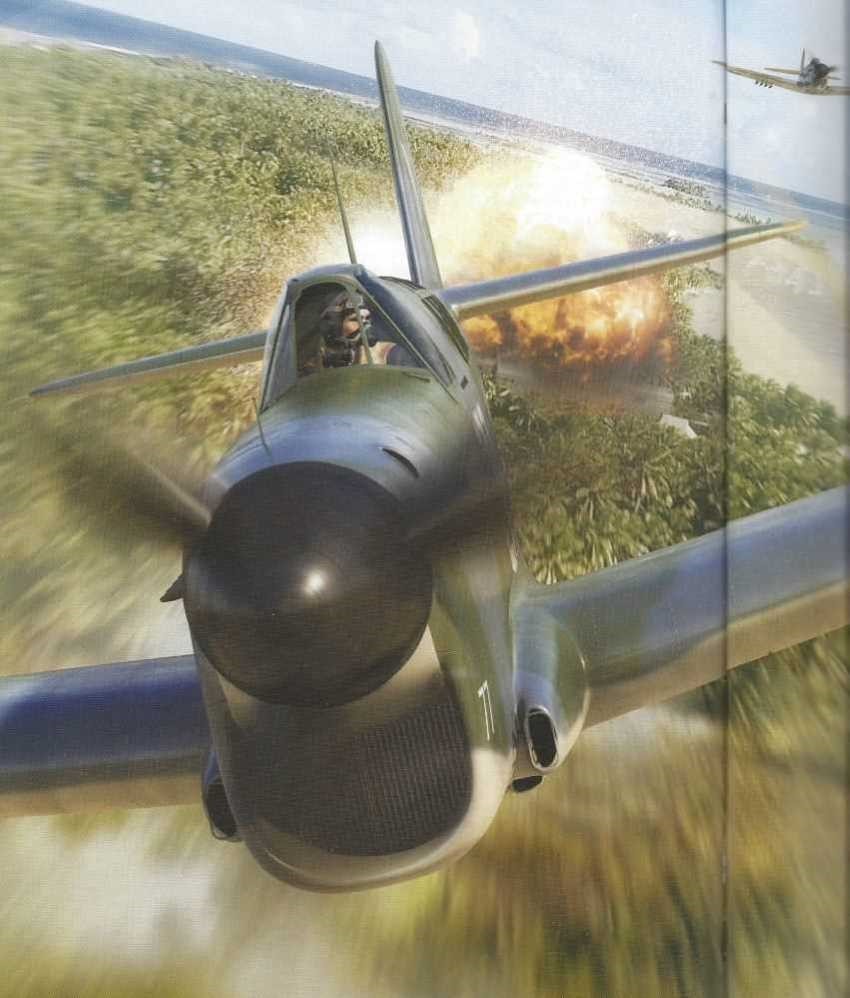 Truk 1944-45 was an interesting and informative read for me.  Its level of detail makes it more than an overview of the campaign, perhaps more of a primer.  Osprey enhances the detailed text with a fine collection of photographs, artwork, and other graphics.  For those qualities of this book I am enthusiastic.  As for the disappointing errors noted, they can not be glossed over or excused.  I am not playing "gotcha," just being objective; I certainly want to do my part to improve this historical knowledge base and help Osprey produce excellent products.  Most of the errors are technical that should not sully the rest of the text, i.e., the exaggerated speed of a bomber, the incorrect number of guns in a fighter, a non-standard abbreviation.   Mistakes such as confusing which air forces were involved and the severely inaccurate map cast doubt upon the confidence of the research and subsequent accuracy of the text.  The general facts may be correct but the details are bedeviling.  Do those mistakes change the overall accounting of the general history of the campaign?  Not really, but I fear that they will harm the confidence in this book, if not the reputation of Osprey.

Please remember to mention to vendors and retailers that you saw this product here - on Aeroscale.