The Darkest Hour Volume 2: The Japanese Offensive in the Indian Ocean 1942

JPTRR
Editor
posted on 2 weeks ago — updated on 2 weeks ago
328
views
THE DARKEST HOUR from HELION & COMPANY is a two-volume systematic account of the Japanese carrier campaign to secure Japan’s western flank of their Pacific war by destroying the offensive capabilities of the Royal Navy Far Eastern Fleet. This second volume presents the combat phase of that Japanese navy offensive. 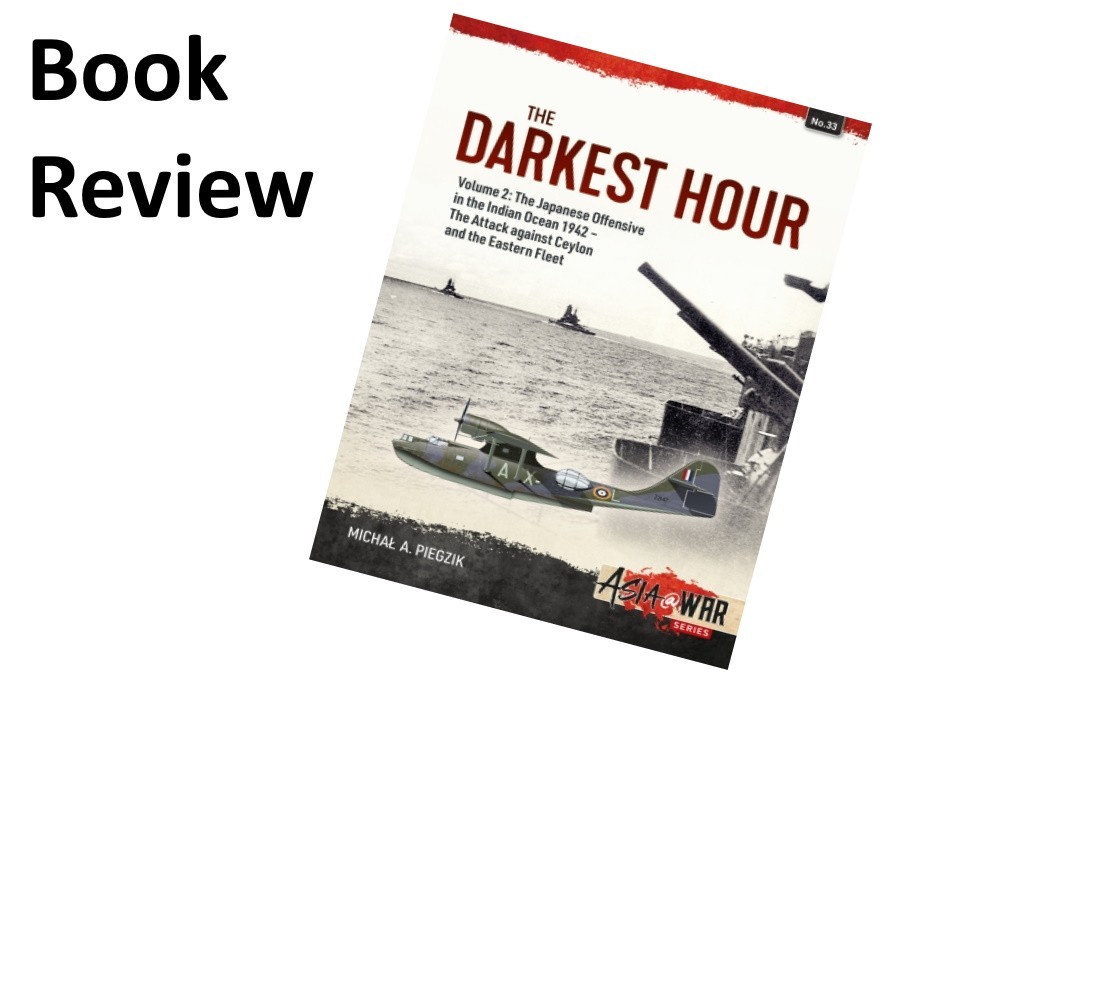 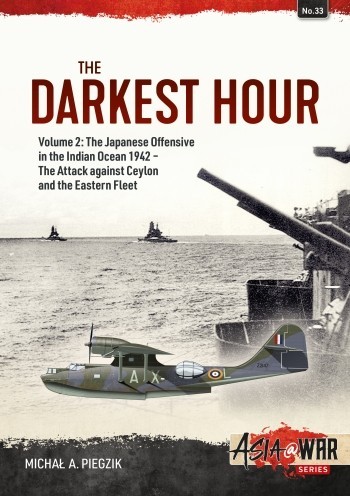 The Darkest Hour Volume 2: The Japanese Offensive in the Indian Ocean 1942 – the Attack Against Ceylon and the Eastern Fleet is the 33rd title of the Helion & Co. series Asia @ War.  Authored by Michal A. Piegzik, this 72-page A4 format softcover is catalogued with ISBN 9781804510230.   It features 47 black-and-white photographs 16 color illustrations, 6 maps, and 18 tables.  Artwork is by artists Tom Cooper, Anderson Subtil and Goran Sudar.

Volume 1 of The Darkest Hour described the strategic planning and opening moves of both sides in February–March 1942.  Volume 2 covers cat-and-mouse moves and countermoves, and combat.

Despite being detected by a British flying boat, the first attack against Allied facilities was practically a surprise.  RAF fighters did get airborne, and later land and carrier-based scouts and bombers did find the Japanese.  However, despite a surprising defense, the Japanese inflicted significant damage on land and at sea, including the sinking of an aircraft, two heavy cruisers and a destroyer.

This volume details the planning and execution of Japan’s awesome carrier strikes that distressed the British off the coast of India. You can view the book on Casemate’s site here.

This book wastes no time nor space - the title page is immediately inside the cover.  From there to the end of the appendices we have 62 pages of content with another 10 pages of bibliography, organized thus:

2. The Sinking of HMS Cornwall and HMS Dorsetshire

4. British Counter-attack and the Sinking of HMS Hermes and HMAS Vampire

6. Malay Force in the Bay of Bengal

I. Composition of the Kidō Butai striking group during the raid on Colombo on 5 April 1942

III. The composition of the Special Striking Group during the attack on the Cornwall and Dorsetshire, 5 April 1942

V. Composition of the Kidō Butai striking group during the raid on Trincomalee, 9 April 1942

VI. Composition of the Special Striking Group against Hermes and other British ships, 9 April 1942

VIII. Kidō Butai’s losses during the operation in the Indian Ocean, 4-9 April 1942

IX. Operations of Ryūjō’s air group against Allied shipping in the Bay of Bengal, 6 April 1942

This volume begins the same as Vol.1, with a content page featuring a map of the western Pacific, from New Guinea to Africa, and an introduction noting sources and terminologies and standards.   Personal quotes and accounts enrich this text, too.  The author cites numerous Japanese command orders and directives and their contents, e.g., Operational Order No. 71.  He explains Japanese pre-planned attack groups, i.e., the air group makeup of “composition No. 1” or “No. 2”, and weapons loadouts, i.e., “variant No. 2,” types of those offensive weapons, bomb types and weights.  He describes which scout planes were launched based on their ranges, and relates search patterns.  Ship latitudes and longitudes, courses and bearing are also noted.

Raid on Colombo begins the history of the attacks.  Aircraft claims and losses are mentioned, as is damage on the surface.   For readers primarily interested in the combat aspect of this campaign, The Sinking of HMS Cornwall and HMS Dorsetshire is ripe with information.  It details Japanese and British ship movements (with latitude and longitude listed), plans, signals, scouting aircraft sorties, detections and pursuits, and vignettes of the campaign.  It reveals in detail the tragedy of the two cruisers and the incredible accuracy of Japanese dive-bombing, and the British plans for a night torpedo counterattack.  One of the most valuable and enlightening tidbits of trivia for this, and subsequent Kido Butai operations, e.g., Midway, is Table 4 – definitely look at it in Tables and Lists, below.

Kidō Butai retreats is a short chapter and chronicles its retirement from the Indian Ocean and progression to subsequent duties, including the battles of the Coral Seas and Midway.  Malay Force in the Bay of Bengal recounts that key element of the Indian Ocean raid.  It describes deployment of forces and damage inflicted upon the Allies.  To adequately narrate the havoc rained upon the Allies the author separates the actions of the task force into three different groups.  The raid was successful and substantial, with the author describing each vessel sunk by each part of the task force.  Finally, Epilogue and Japanese Summary and Reaction distills the failures, victories, affects - short and long-term, lessons of the operation, and future plans.   The shock of the operation upon England and Churchill is shown through excerpts of the letter he wrote to President Roosevelt explaining the peril.  Japanese analysis is supported with the detailed after action reports from Hiryū and the 5th Carrier Division, including a post-war report by CMDR Fuchida.  Another valuable bit of trivia is a Japanese evaluation of their Type 98 and 99 No.25 bombs.  One further interesting part is a 1992 Japanese simulation of a potential carrier battle between Kido Butai and the Eastern Fleet.

I found this book to be informative, organized and detailed.

Detailed as the text is, this book is enhanced by the excellent gallery of photographs.  I admit that I have not read a fraction of the books about Nihon Kaigun available and the Pacific War but most of the photographs are new to me.  Incredible images of IJN carrier decks or ships in formation present exciting views of fleet.  Not all are studio quality but obviously many were exposed ‘in action.’  Some appear to be genuine scenes of life with Kidō Butai, e.g., crews moving aircraft on the flight deck, posing pilots.  This volume could stand alone without images, or as a photo book with limited text.

This book contains many maps, most in color.  Similar to volume 1, a profile and planform recognition drawing (HIJMS Tone) from the Office of Naval Intelligence or similar agencies are noted even though not being original artwork.  No Japanese aircraft are illustrated, only British.  The color artwork is high-quantity with researched colors and markings.  Some captions include commentary of colors and descriptions, with British numbers, i.e., dark earth BS381C/350.  The aircraft profiles include a selection of aircraft in overall paint liveries, camouflaged aircraft and markings.  Unit victory claims and losses are included in the captions.  Modelers should be interested in these references:

Modelers and historians should find these tables highly informative and interesting.

1. Main targets of the First Striking Group in Colombo, 5 April 1942 lists the aircraft from which carrier and their targets.

4. Required weapon conversion time on Japanese torpedo bombers during the Indian Ocean operation: the time to change between six weapon loads based on whether bombs or torpedoes were, or not, in a magazine, even noting delayed fuses.

6. CAP pursuit of Round’s Catalina: by shotai; Pilot; take off and landing times.

9. A list of Allied merchant ships destroyed and damaged by Malay Force during 5/6 April during the operation in the Bay of Bengal: Ship; Tonnage; Flag; Sunk by.

10.  Composition of the Kidō Butai  striking group during the raid on Colombo on 5 April 1942: three pages of units; crewmen; notes of bombs on bombers or ammunition expended.

12. Composition of the Special Striking Group during the attack on Cornwall and Dorsetshire, 5 April: shotai; pilot; observer/navigator.

14. Composition of Kidō Butai’s  striking group during the raid on Trincomalee, 9 April 1942: three pages of units; crewmen; notes of bombs on bombers or ammunition expended.

16. Japanese CAP during No. 11 Sqn attack on Kidō Butai: shotai; pilot; take off and landing times.

18. Operation of Ryūjo’s air group against Allied shipping in the Bay of Bengal, 6 April: shotai; take off and landing times; type of aircraft; carrier; aircrew; notes. 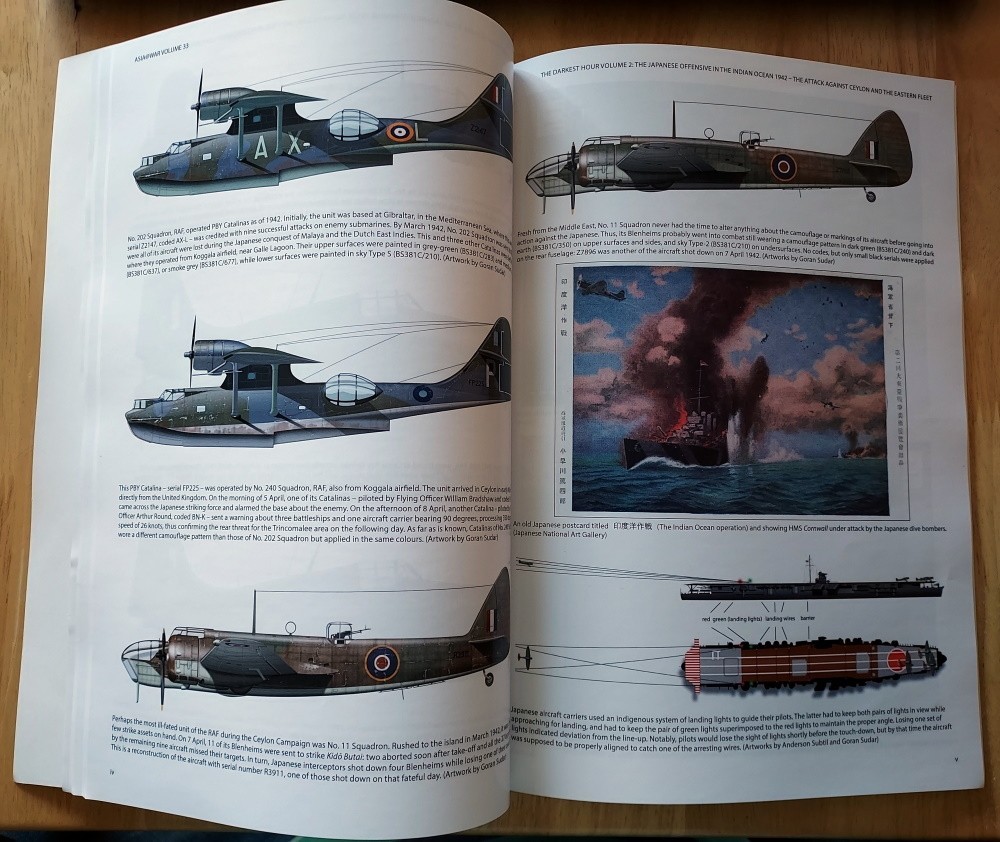 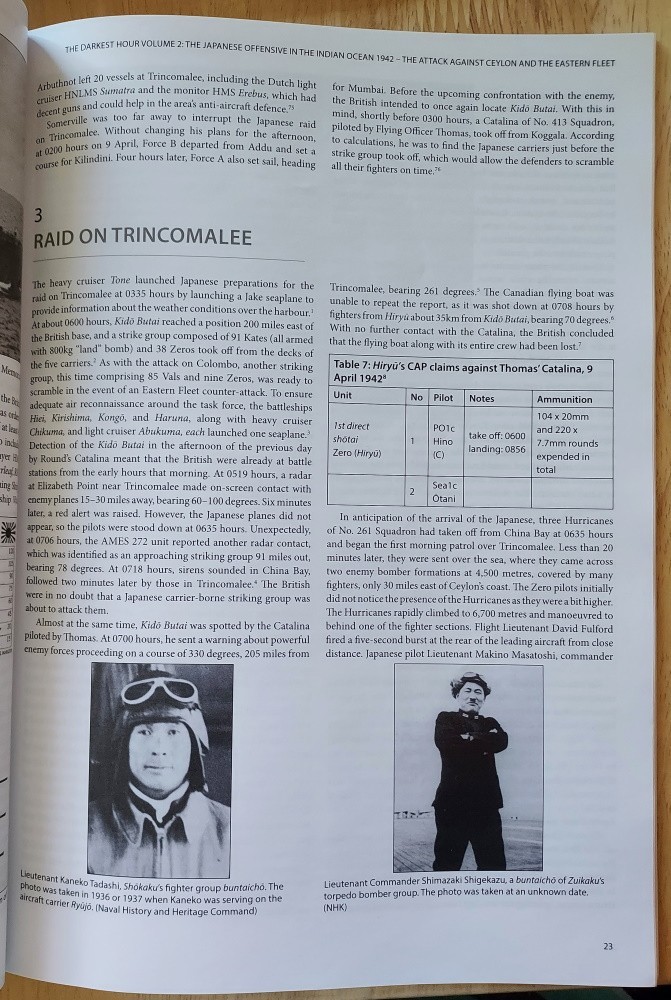 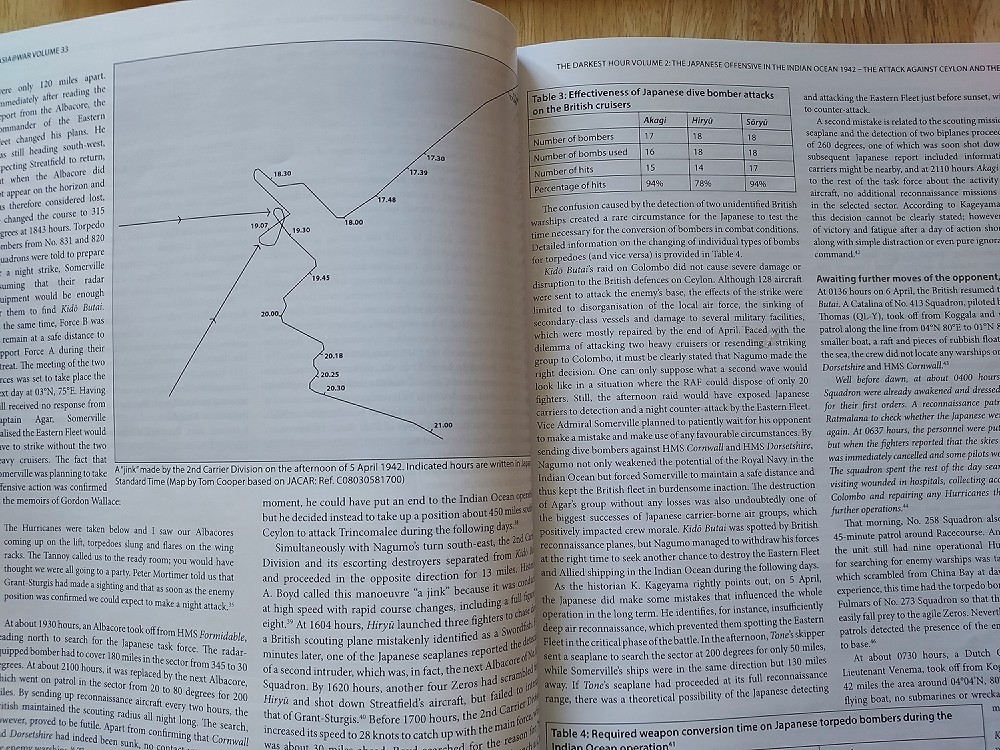 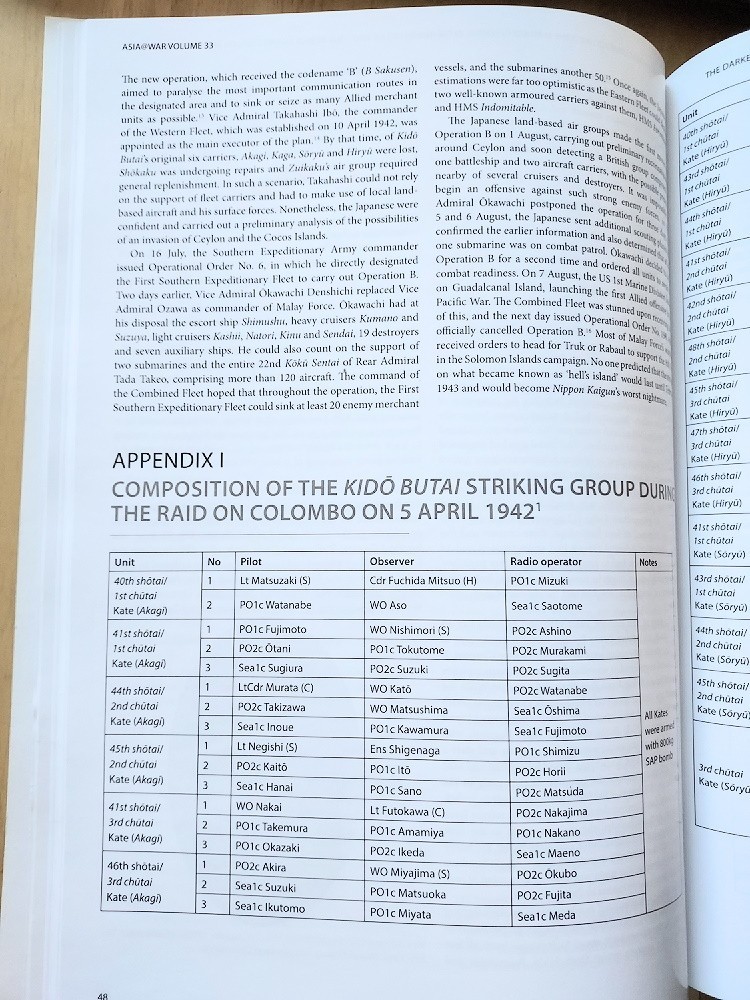 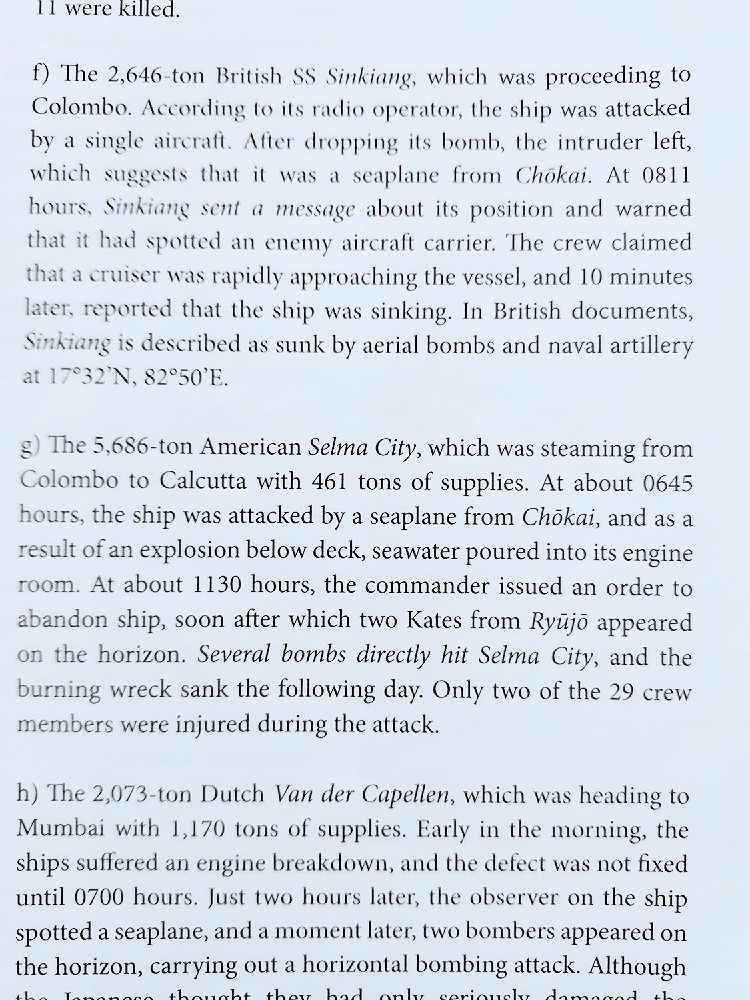 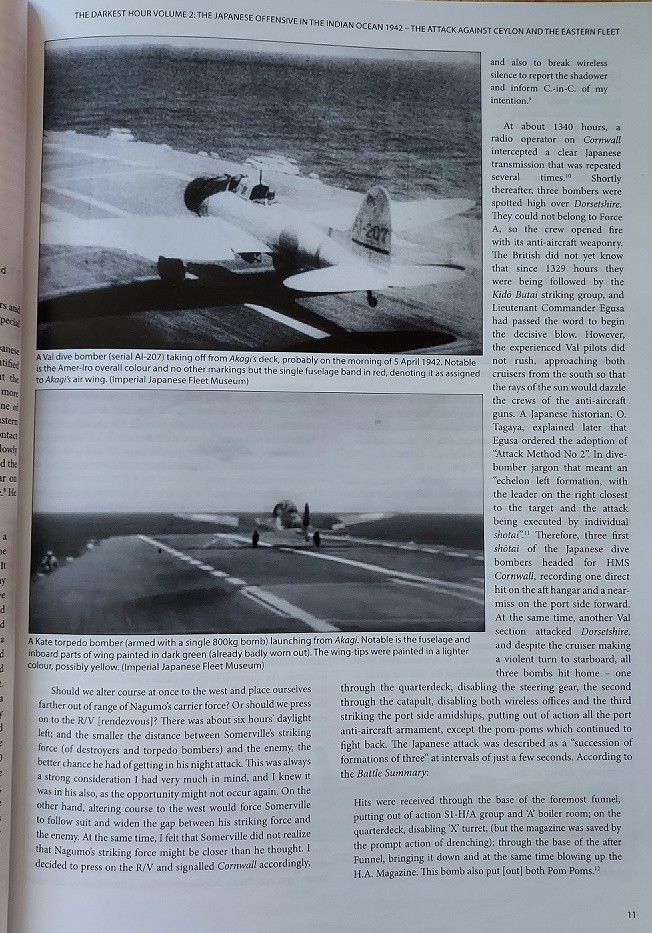 Helion and Company have provided modelers and historians another remarkable resource with The Darkest Hour, Volume 2.  While the back cover describes it as concise, it is filled with focused detail.  Sources and defined terminologies and standards, and personal quotes and accounts enrich the text.  As does the excellent gallery of photographs and artwork.  I believe it will provide the reader with a vast and clear knowledge and understanding of this aggressive operation.

This sample was provided by Casemate Publishers. Please remember to mention to publishers and retailers that you saw this product here – on Aeroscale.