Litespeed
Editor
posted on 2 months ago
596
views
Arma Hobby has released a new Edition of the 1:72 scale North American Mustang, this time it is dedicated to the P-51B of the 8th and 9th Air Force based in Europe 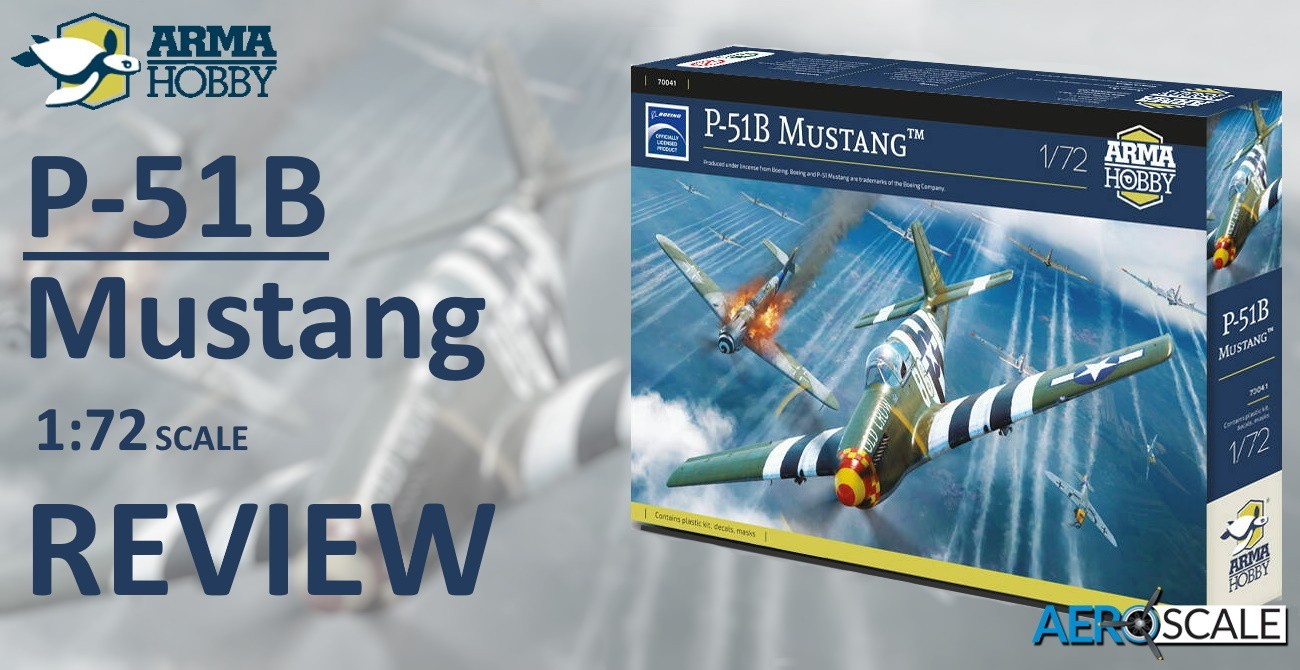 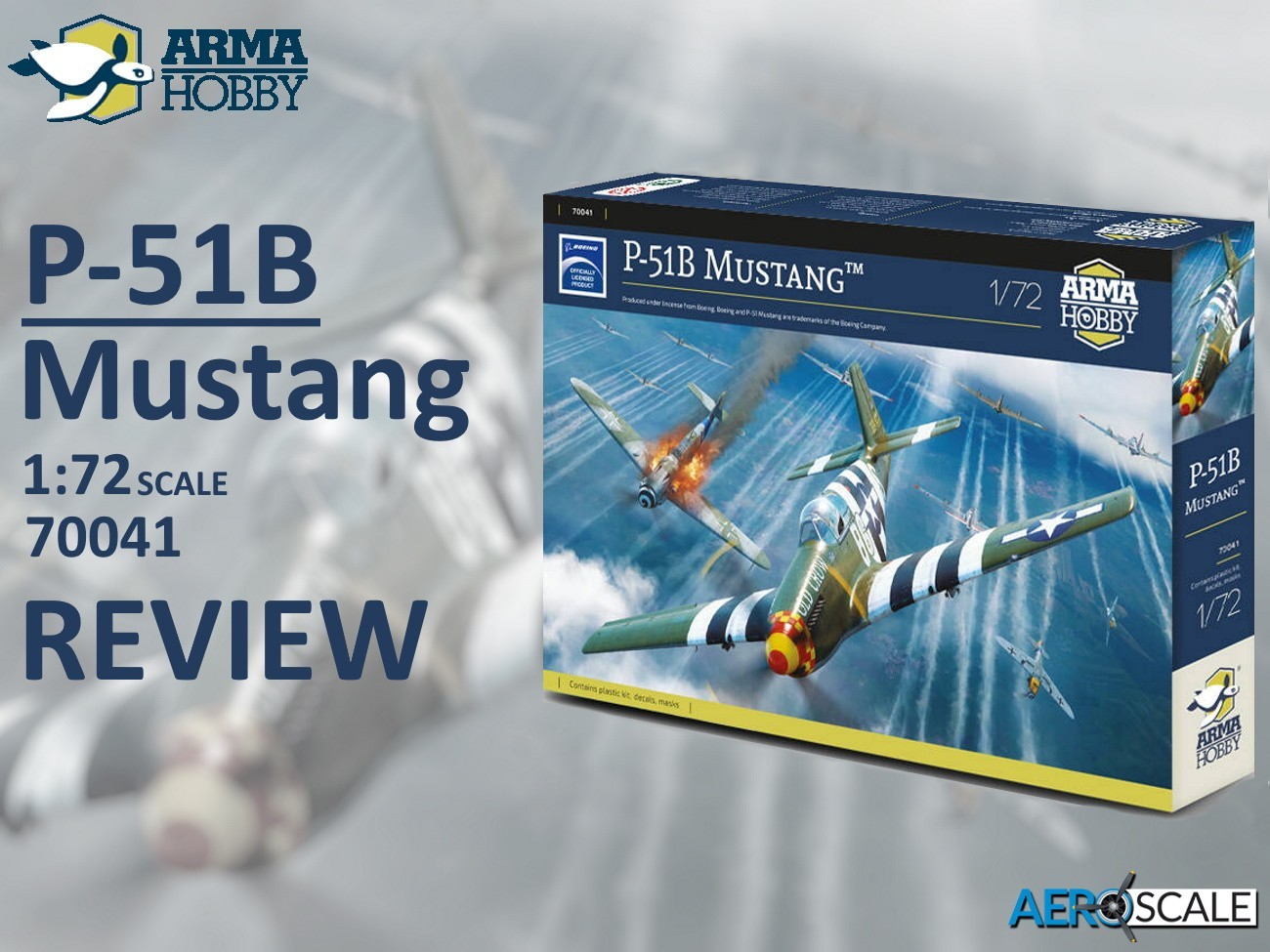 The British Purchasing Commission approached North American Aviation [NAA] to build Curtiss P-40 under license for the RAF. NAA instead proposed the design for a higher performance fighter. Once the contract was agreed the prototype NA-73X airframe was rolled out 102 days later [09/09/1940] with the first flight on 26th October the same year. The Mustang Mk.1 operated by the RAF was powered by the Alinson V-1710, similar to the engine of the P-40. So, the early P-51’s were affected by the same drop in performance with altitude as its predecessor. The P-51B/C (Mustang Mk III) was fitted with the Rolls-Royce Merlin transforming the aircraft's performance at altitudes. 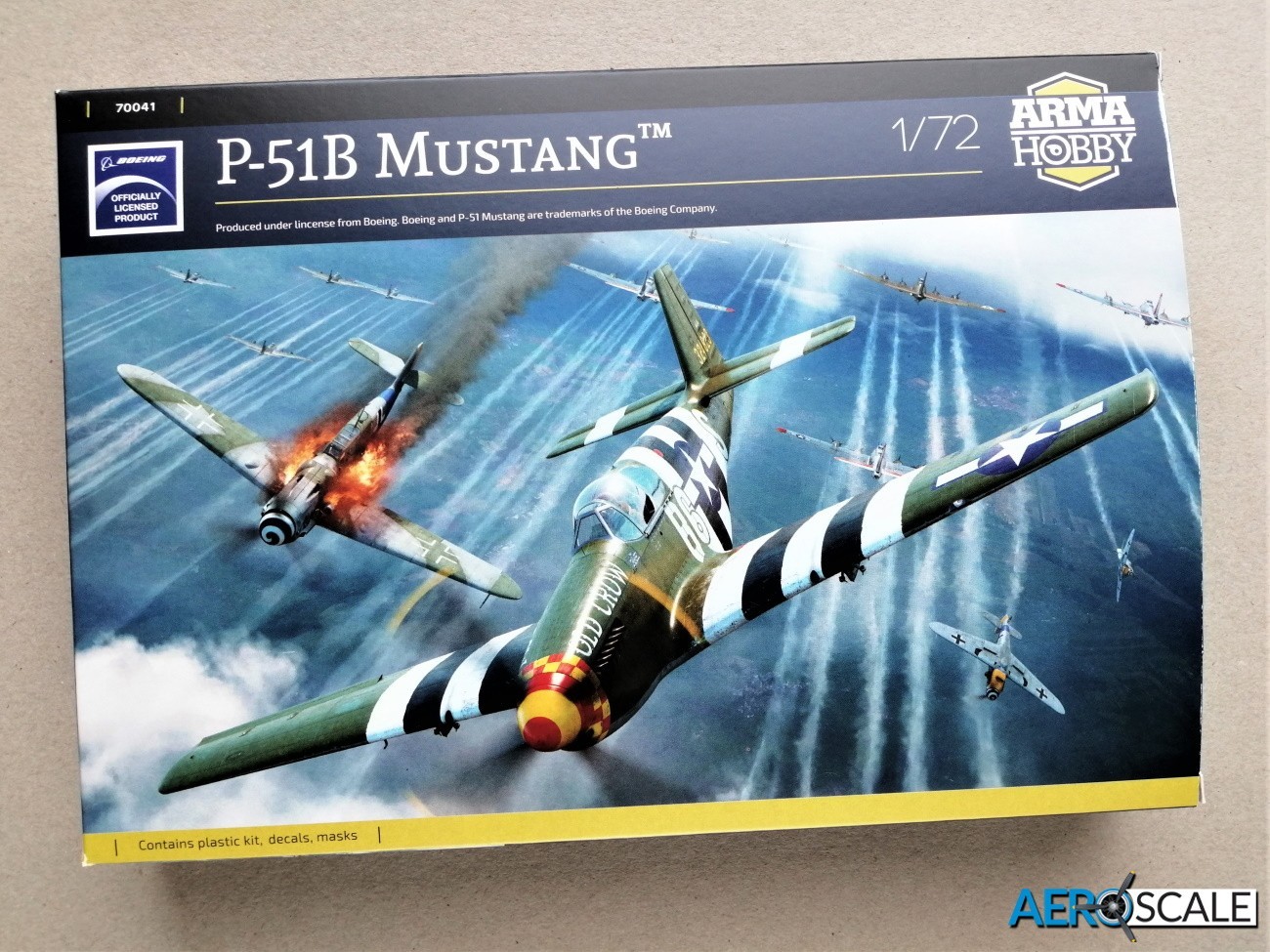 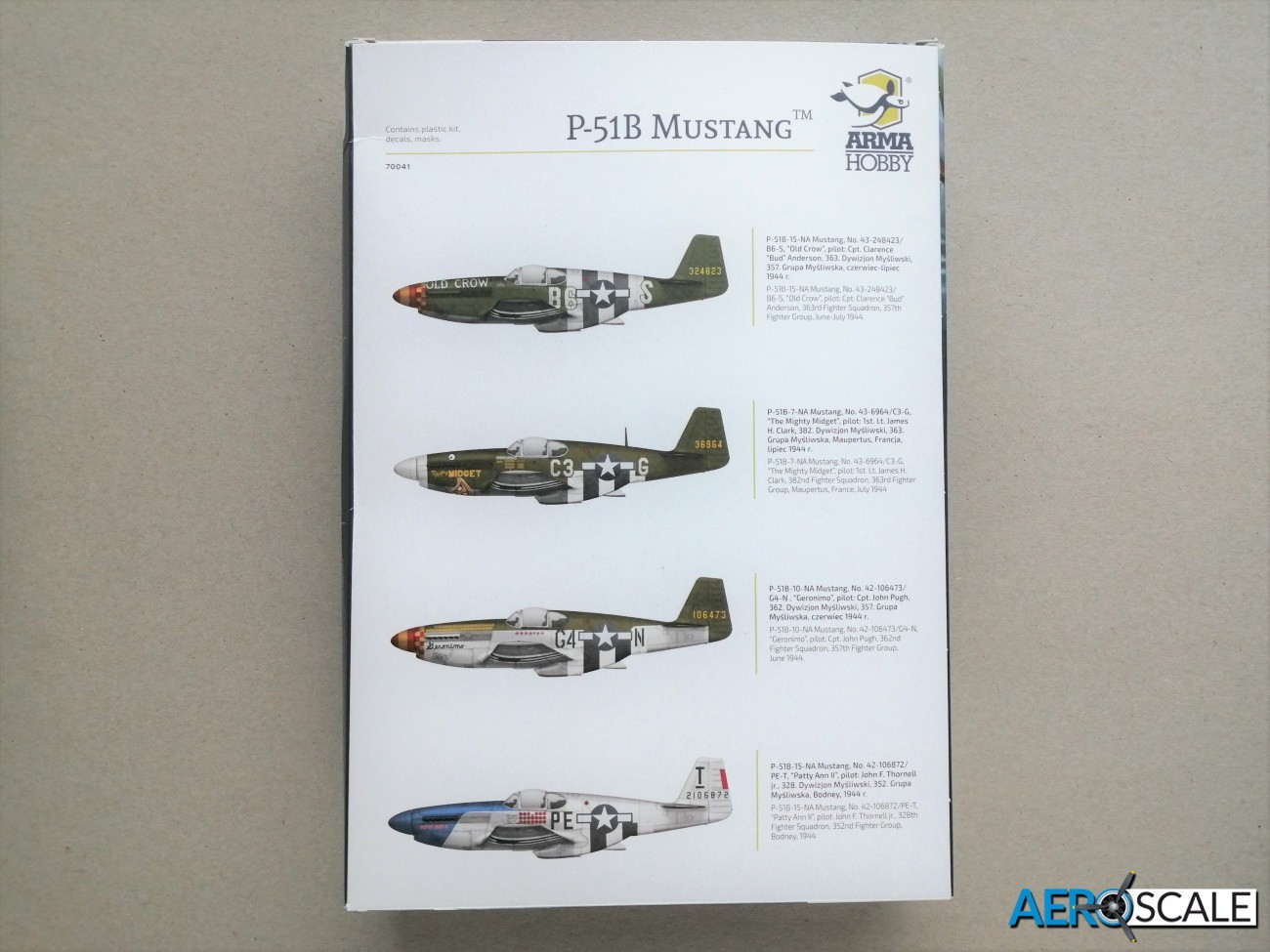 With the introduction of the US in WWII the USAAF's Eighth Air Force operated the Merlin powered P-51Bs and P-51Cs for escort duties while the RAF and the USAAF's Ninth Air Force Mustangs were used in the fighter bomber role. A number of the P-51B and P-51C aircraft were fitted with cameras and designated F-6C for the role of tactical reconnaissance. 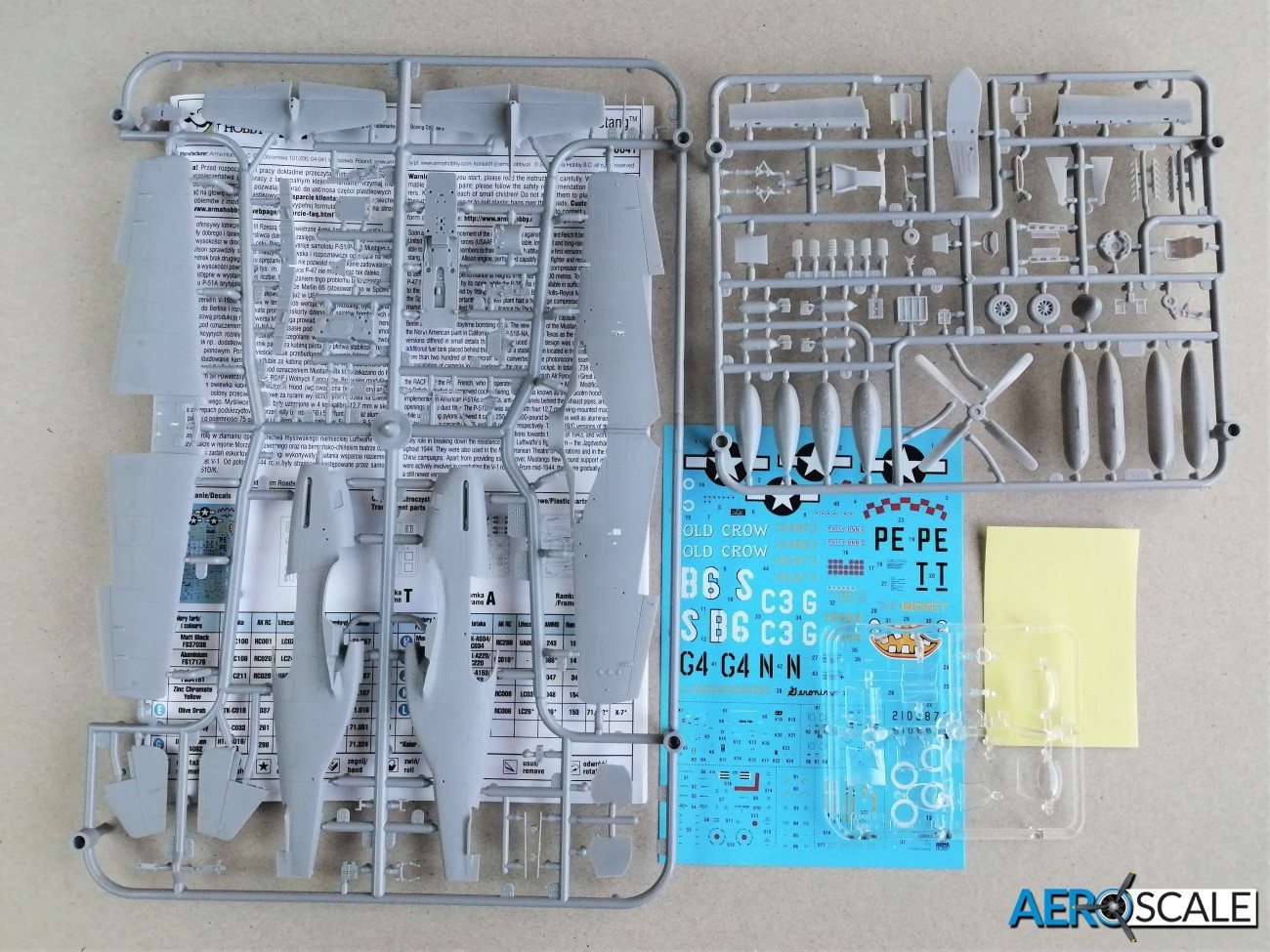 The parts for the Mustang are contained in a side opening box. All the contents are placed in a single bag and inside are separately packed clear parts. The Kabuki masks and decals are placed inside the instructions. The recessed detail is crisp, consistent, and quite subtle, highly suitable for natural metal finishes. The back of the box suggests there are four marking options though there is an additional marking options for 42-106473 ‘Geronimo’ in the instructions. 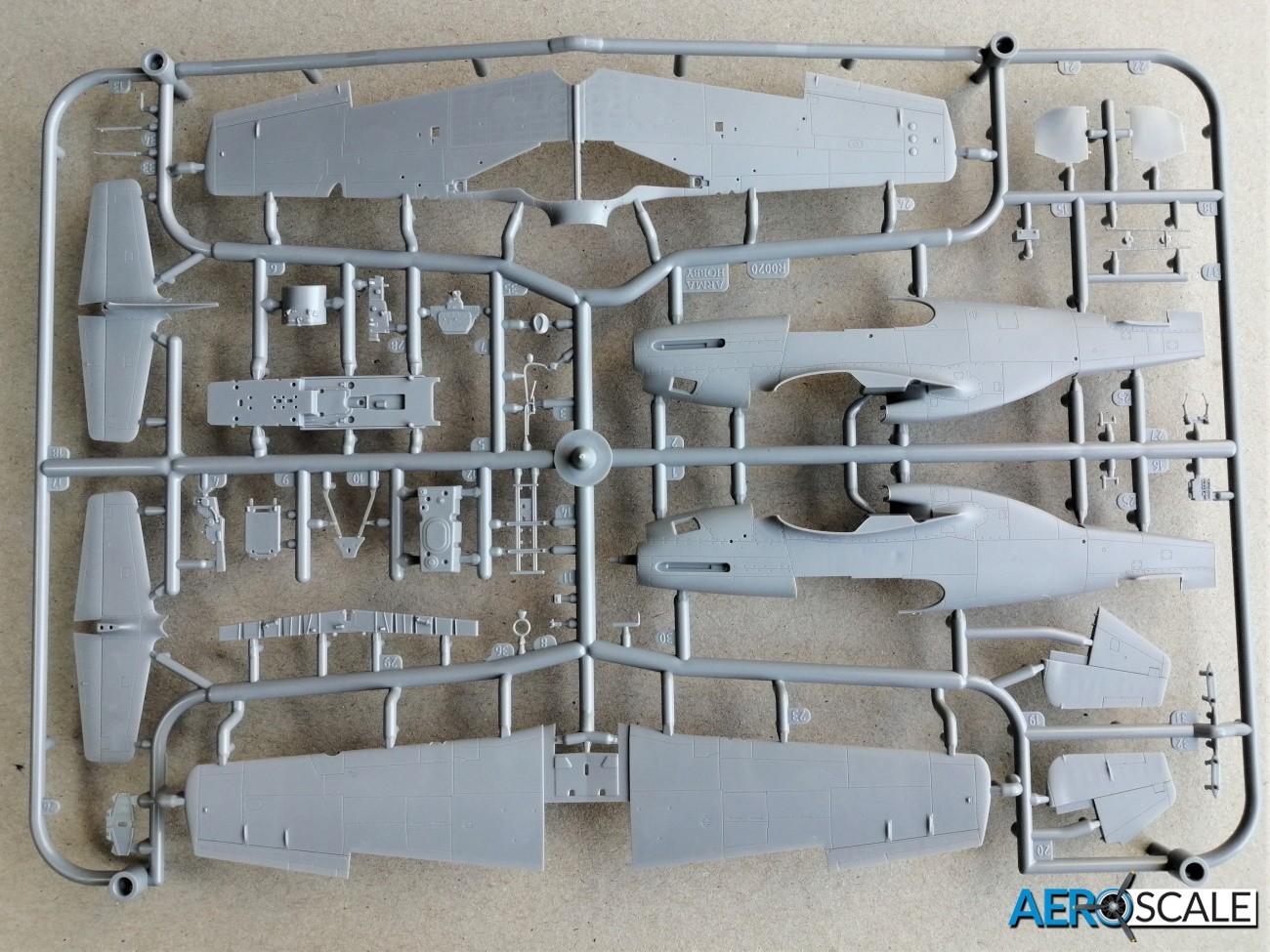 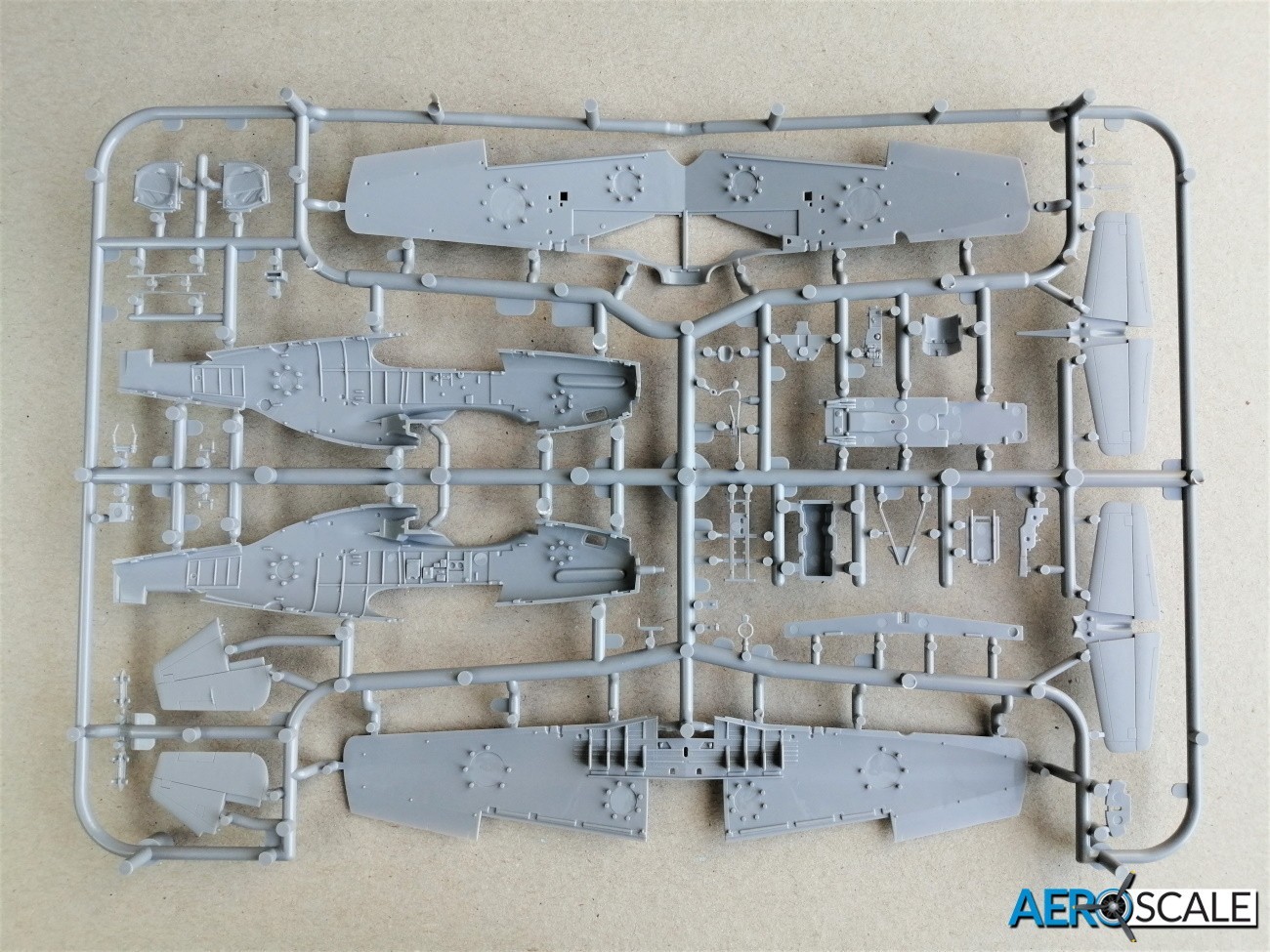 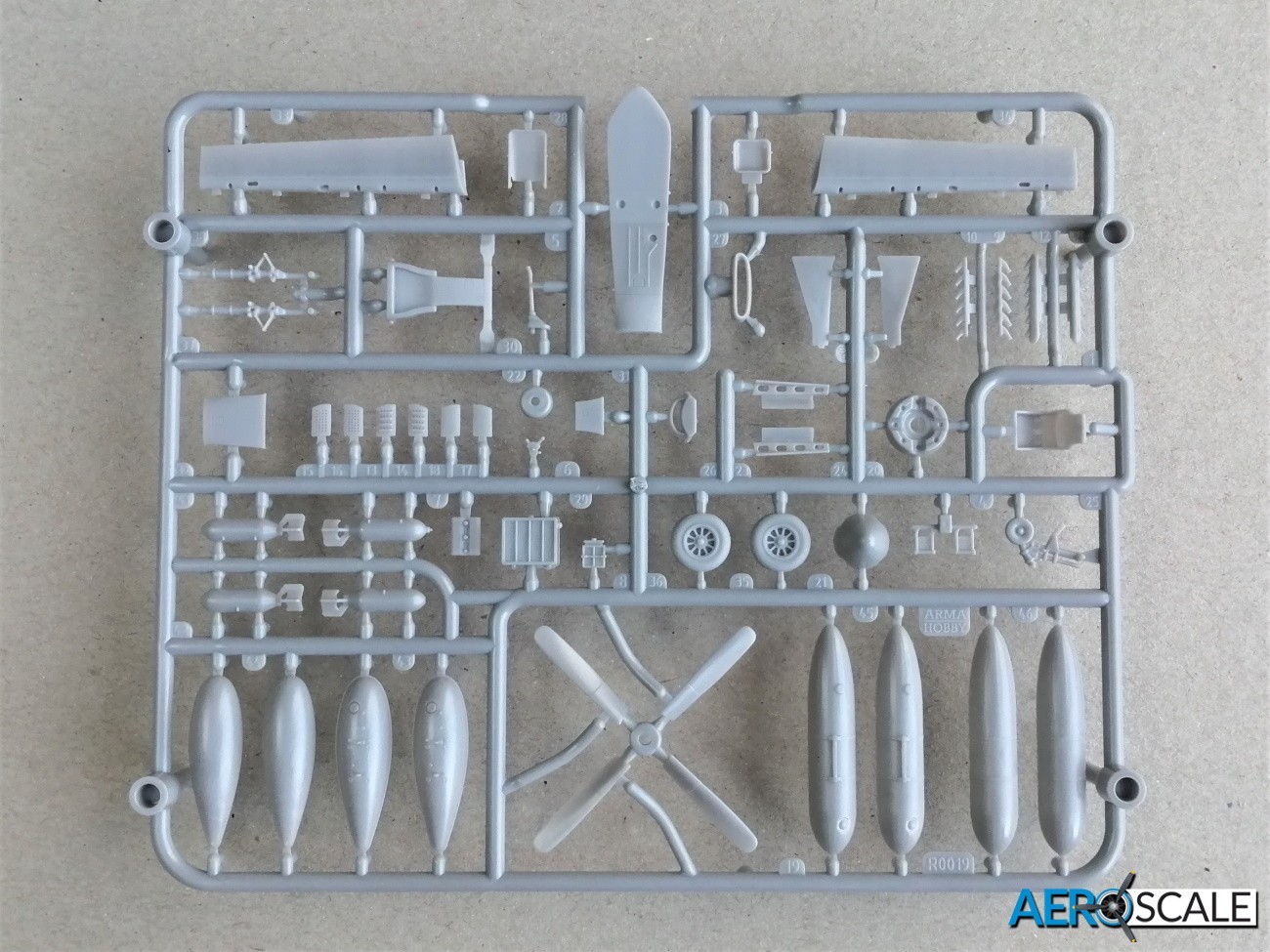 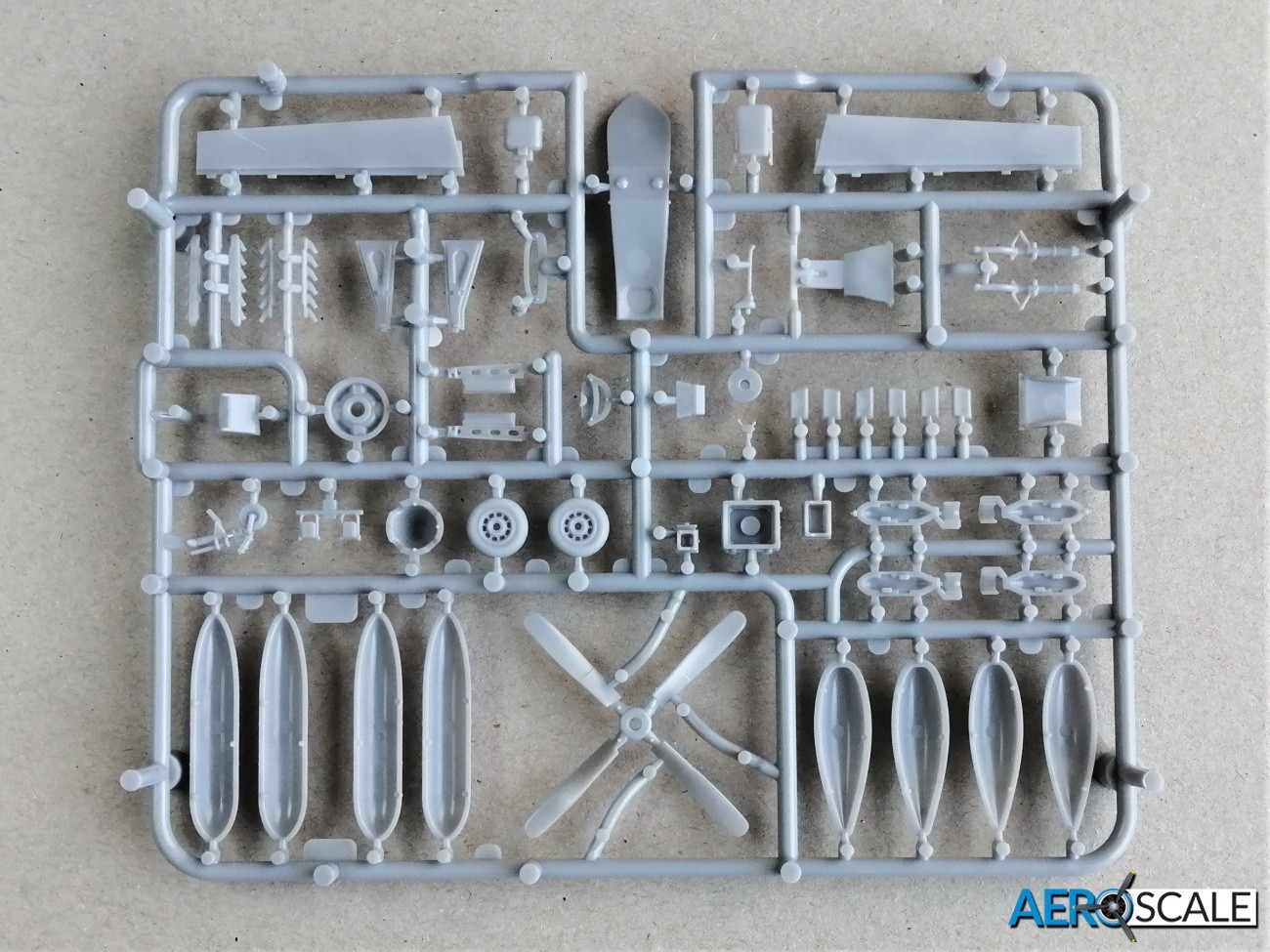 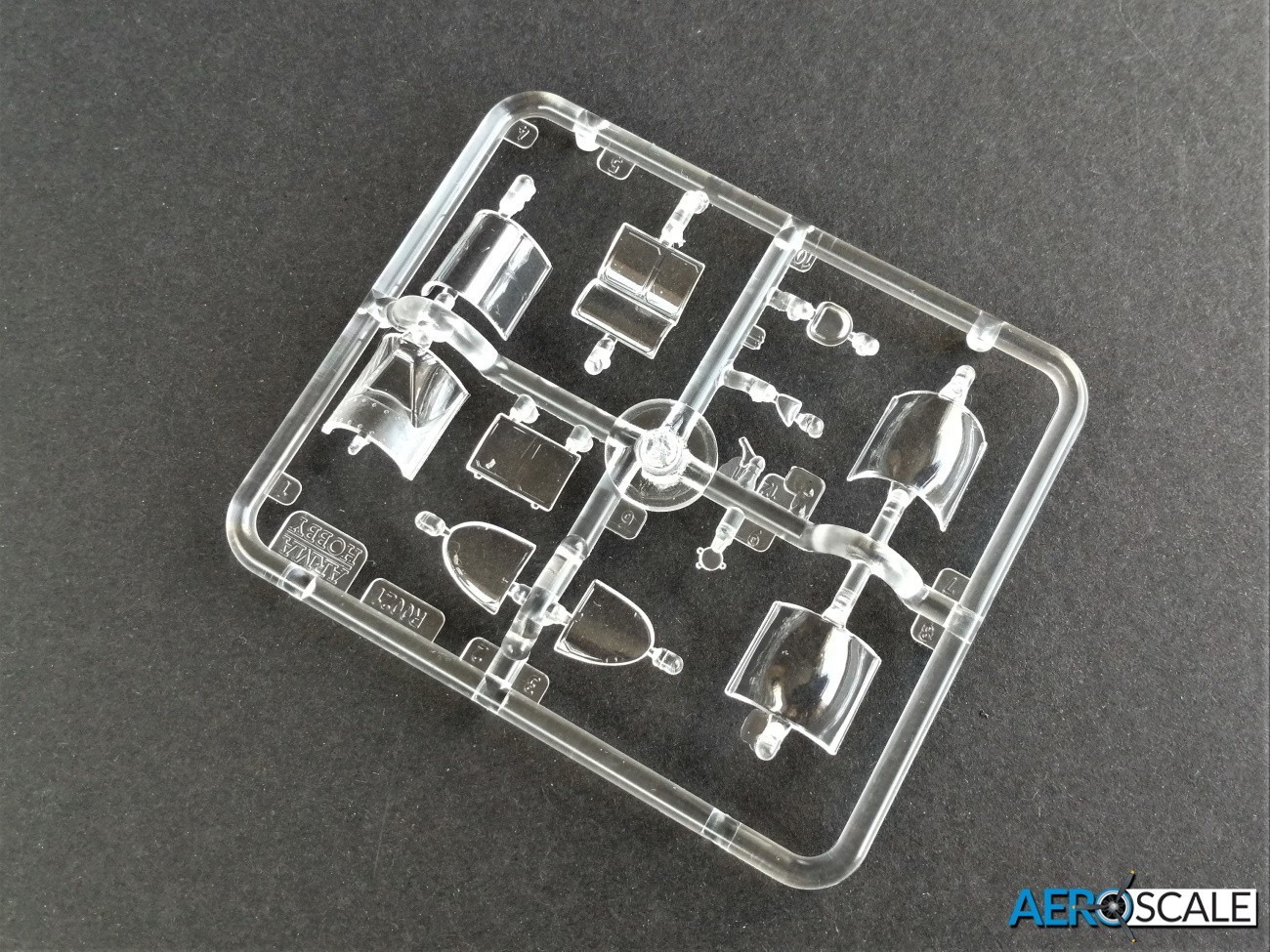 There is an excellent amount of detail in the cockpit and the bay behind the pilot. The detail on the plastic is impressive and this is backed up with quite a few decals replicating instruments, switches, and placards. The side walls of the cockpit and the tail wheel bay are detailed with raised rib work. Additional detail for the sidewalls includes throttle and electrical boxes There are two types of seats: Warren McArthur or Schick Johnson, depending which marking option you go for. Detail extends to the rear of the pilot with separate parts for the radio equipment, battery, and the fuel tank. Arma Hobby has included PE [unpainted] or decal seat harnesses. 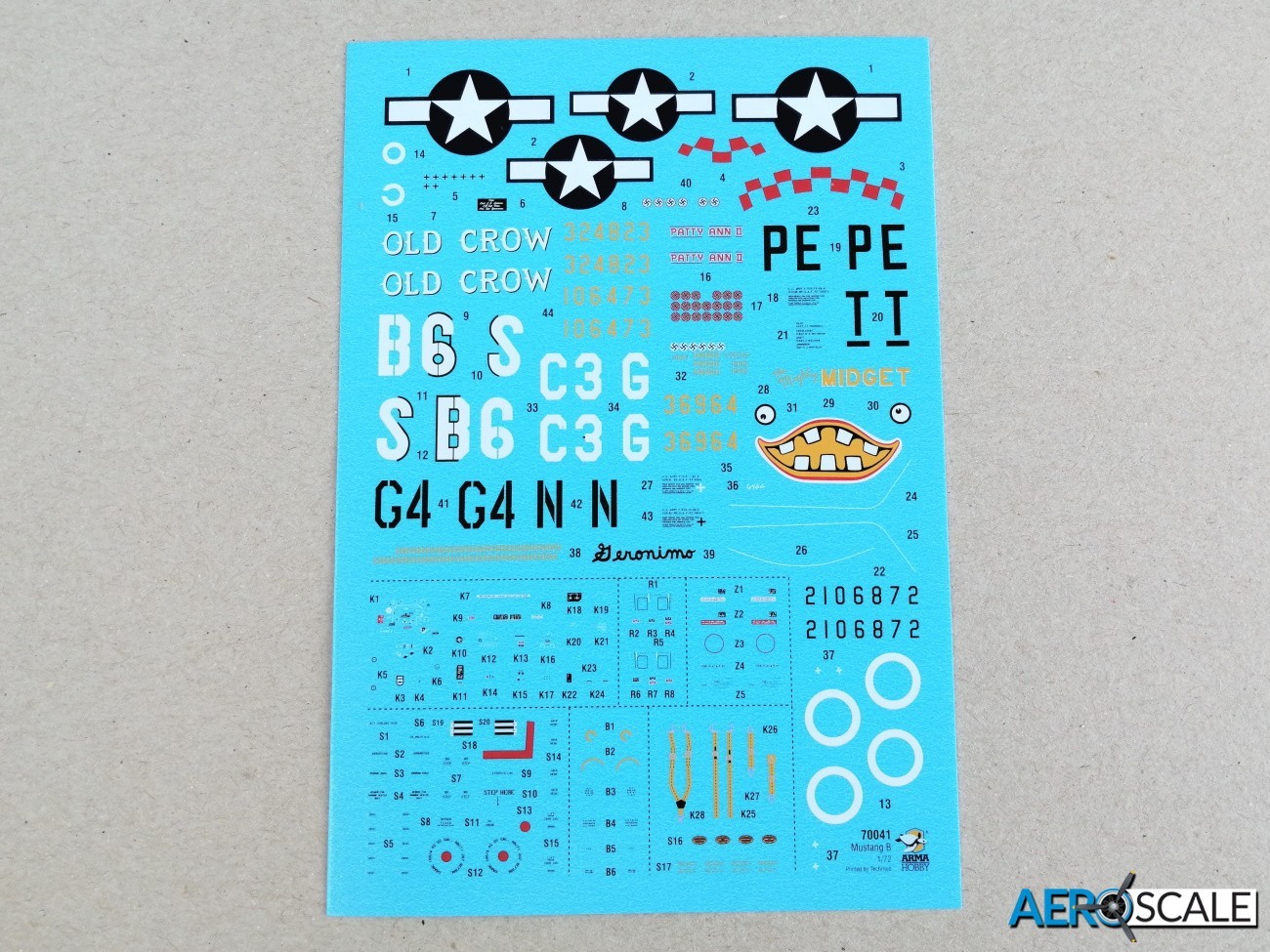 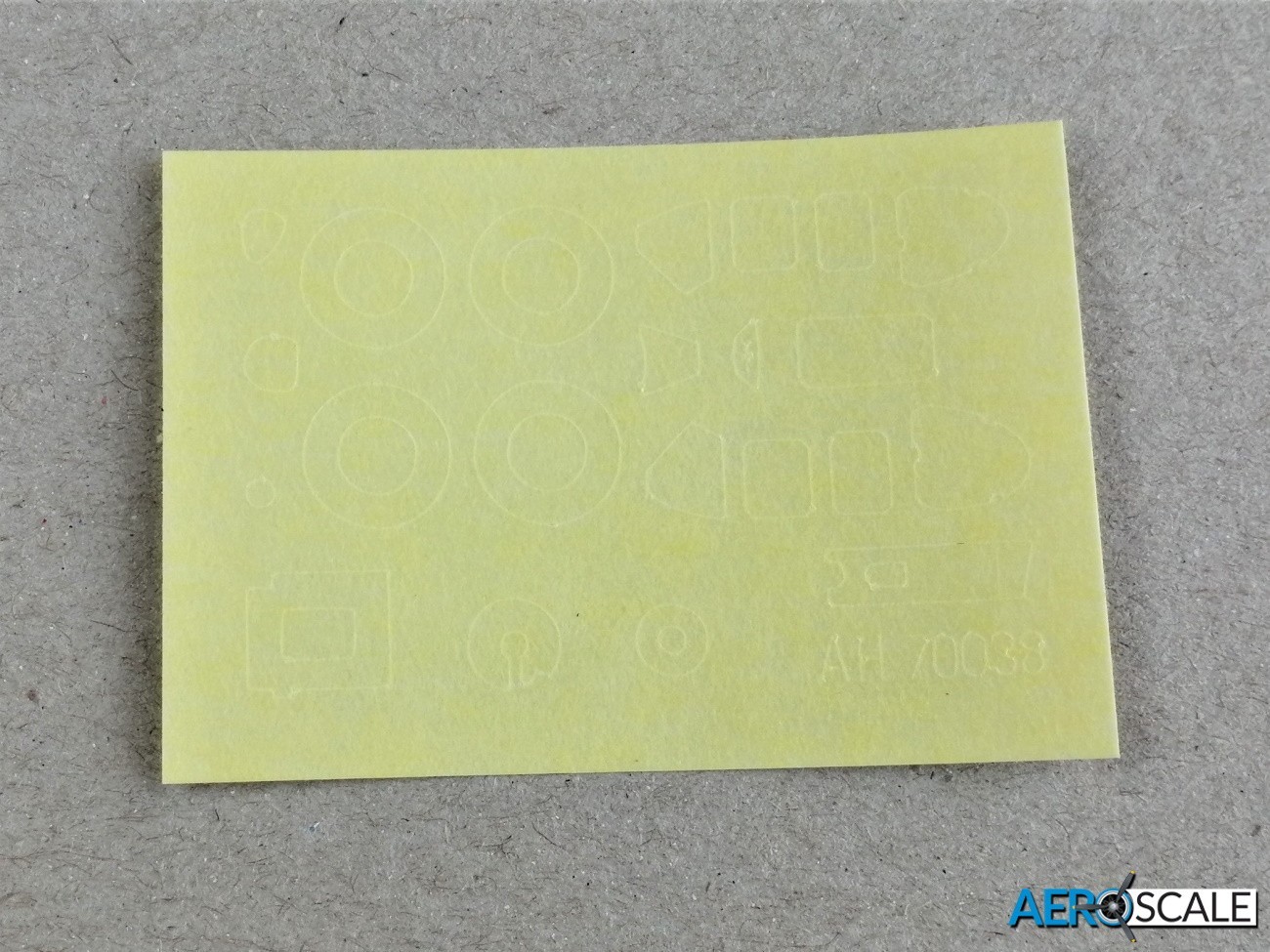 The kit provides both framed and Malcom hood options for the canopy. The open hatch moulded with the framed canopy is an excellent feature. There are two Malcom hoods one for open and the other for closed. 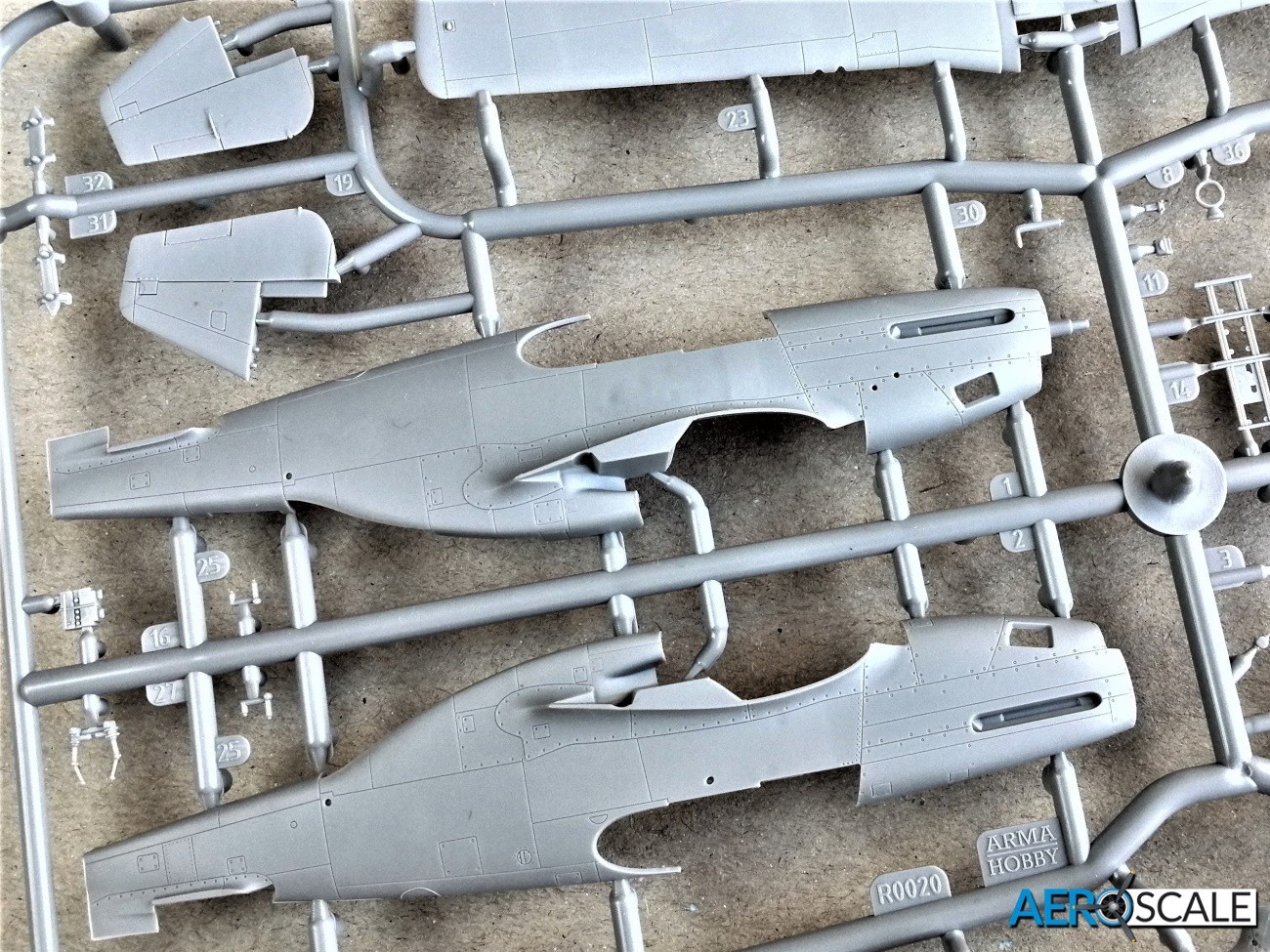 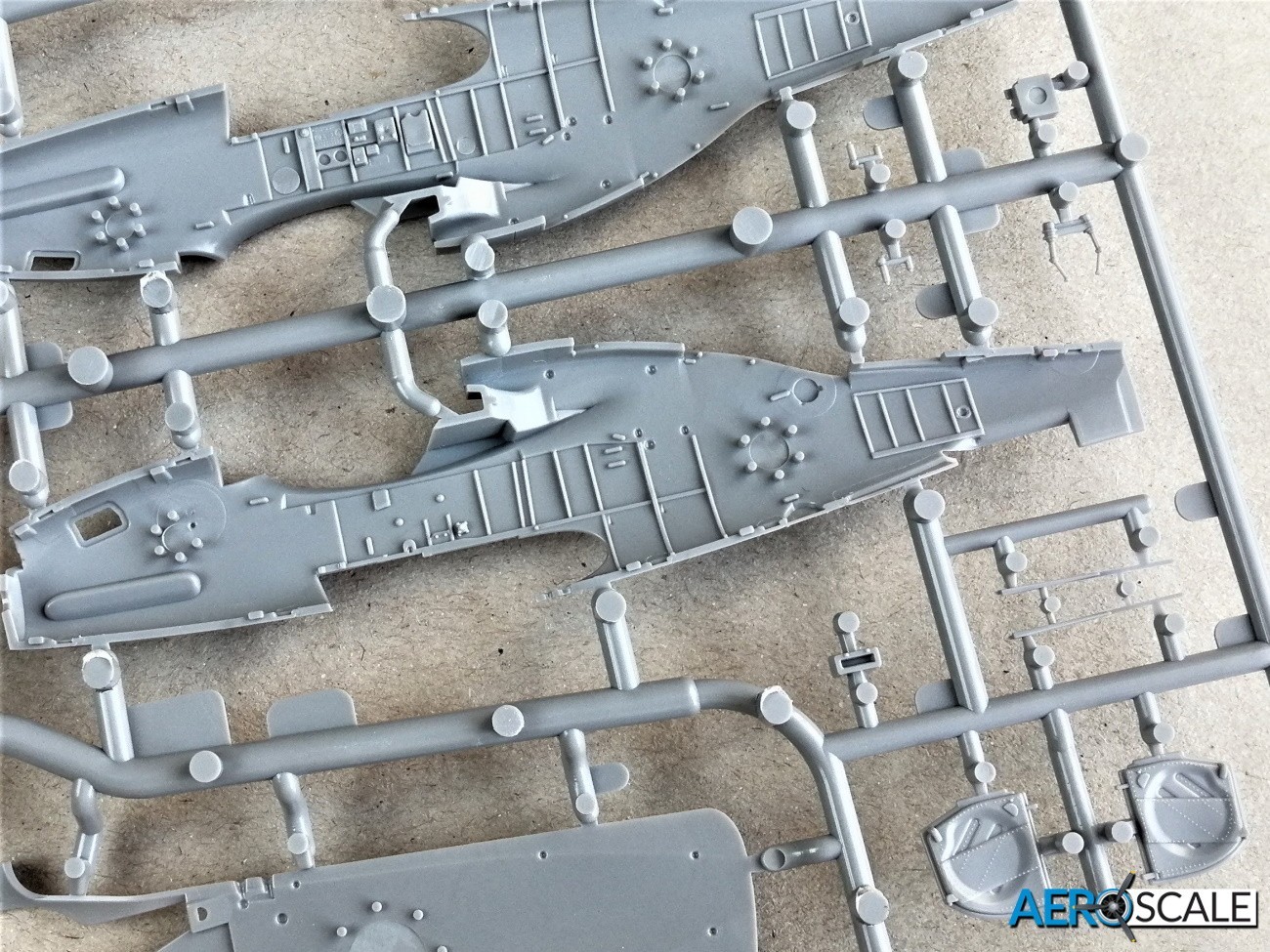 The fuselage is split traditionally in two halves and there are no annoying cut-outs revealing internal detail. The separate non-filleted tail is fitted for the five marking options. The vent covers for the carburetor intake are separate and with this edition you need to use the perforated set from the three types of cover. The kit comes with the Hamilton standard cuffed propeller and there is a choice of two styles of exhaust. One has the shielding protecting the pilot from glare of the exhaust. The air duct under the fuselage is also a focus for several detailed parts. This release features the filler cap for the self-sealing fuel tank aft of the pilot's seat that started with P-51B-5-NA or block 5. There is a fair bit of detail in the radiator housing under the fuselage. The face of the radiator has some fine mesh detail. The lip of the intake as well as the lip of the intake in the nose are separate parts. 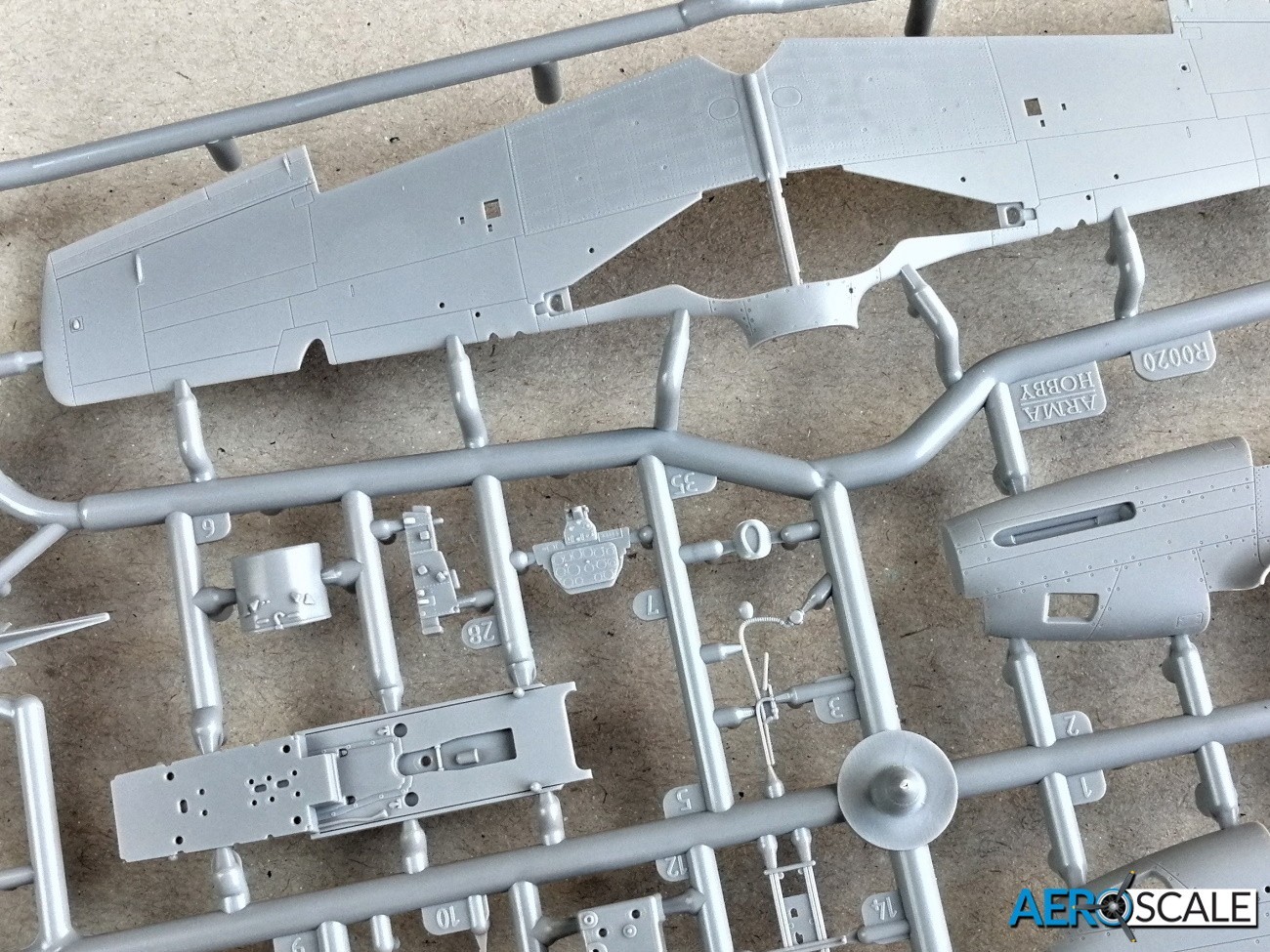 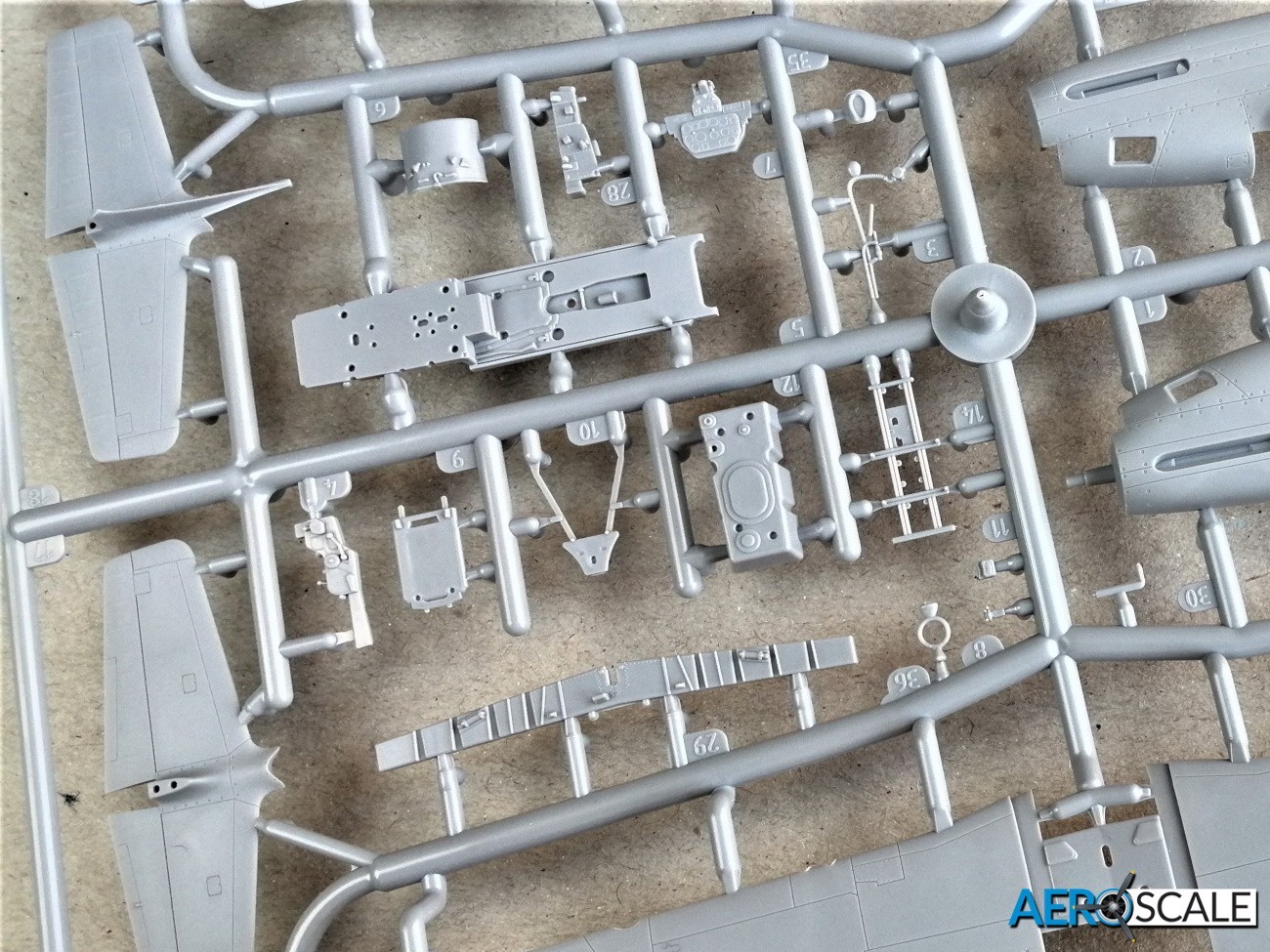 The wings are in two pieces with a one piece lower and unusually a one piece upper. The ailerons are moulded as part of the wing though the flaps are separate and can be fitted in the dropped position. The detail in the undercarriage [U/C] bay is moulded into the top wing and it looks superb. Normally the cost of such detail are signs of shrinkage on the other side, but there is no sign of it. There is a section of the wing spar to add to the U/C bay too. If you want to attach ordnance under the wing, then holes need to be drilled. There are guide holes to start you off. The kit features both filleted or non-filleted tail, though the latter is used on all the marking options. The horizontal tailplane is one piece with a separate with elevators moulded in the neutral position. The canvas covered control surfaces are represented accurately by Arma Hobby and rib taping looks subtle. The vertical tail has the neutral positioned rudder moulded on. Trailing edges for the elevators and rudder are very thin. 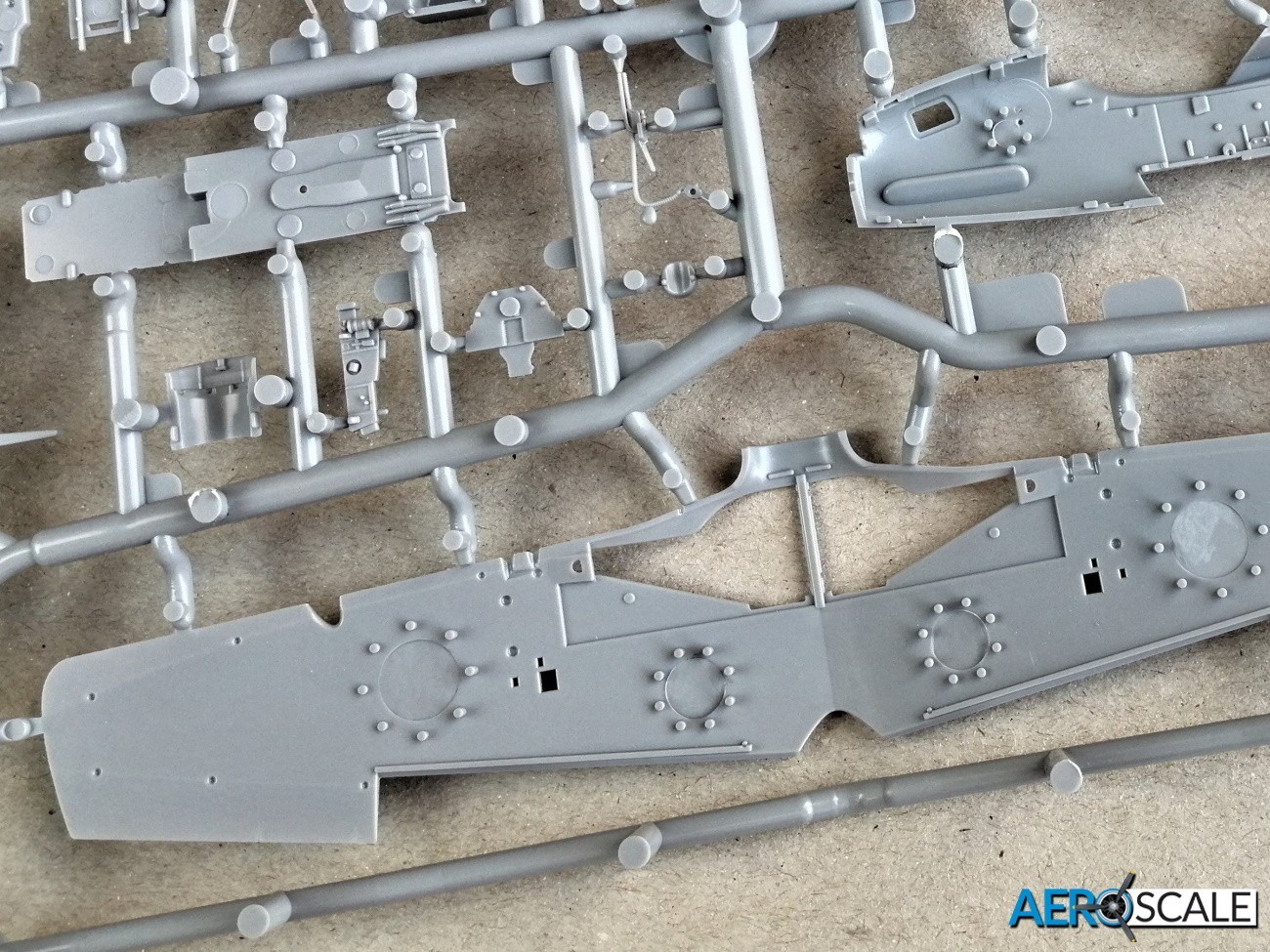 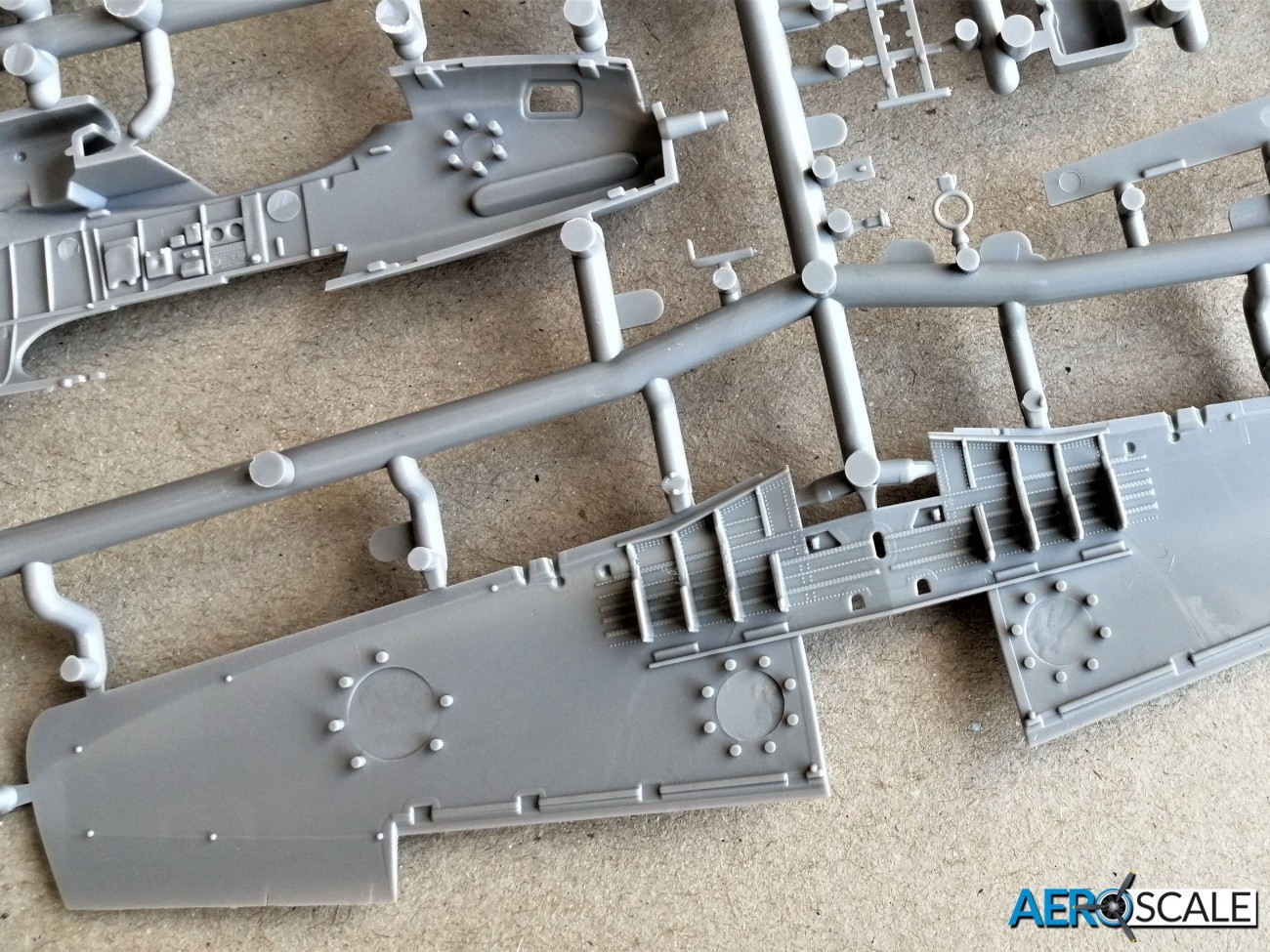 The main wheels are one piece with beautifully detailed hubs and diamond tread. The tyres are slightly weighted. The rear wheel unit is one piece and superbly moulded. The detail on the inner doors of the main undercarriage is well executed, replicating the pressed aluminium very well. The only area I can see any shrinkage because of all the detail is on the outer gear door. There a hint of shrinkage on the exterior surface of the doors attached to the U/C legs, although this will be easy to put right with a sanding stick as there is no surface detail. 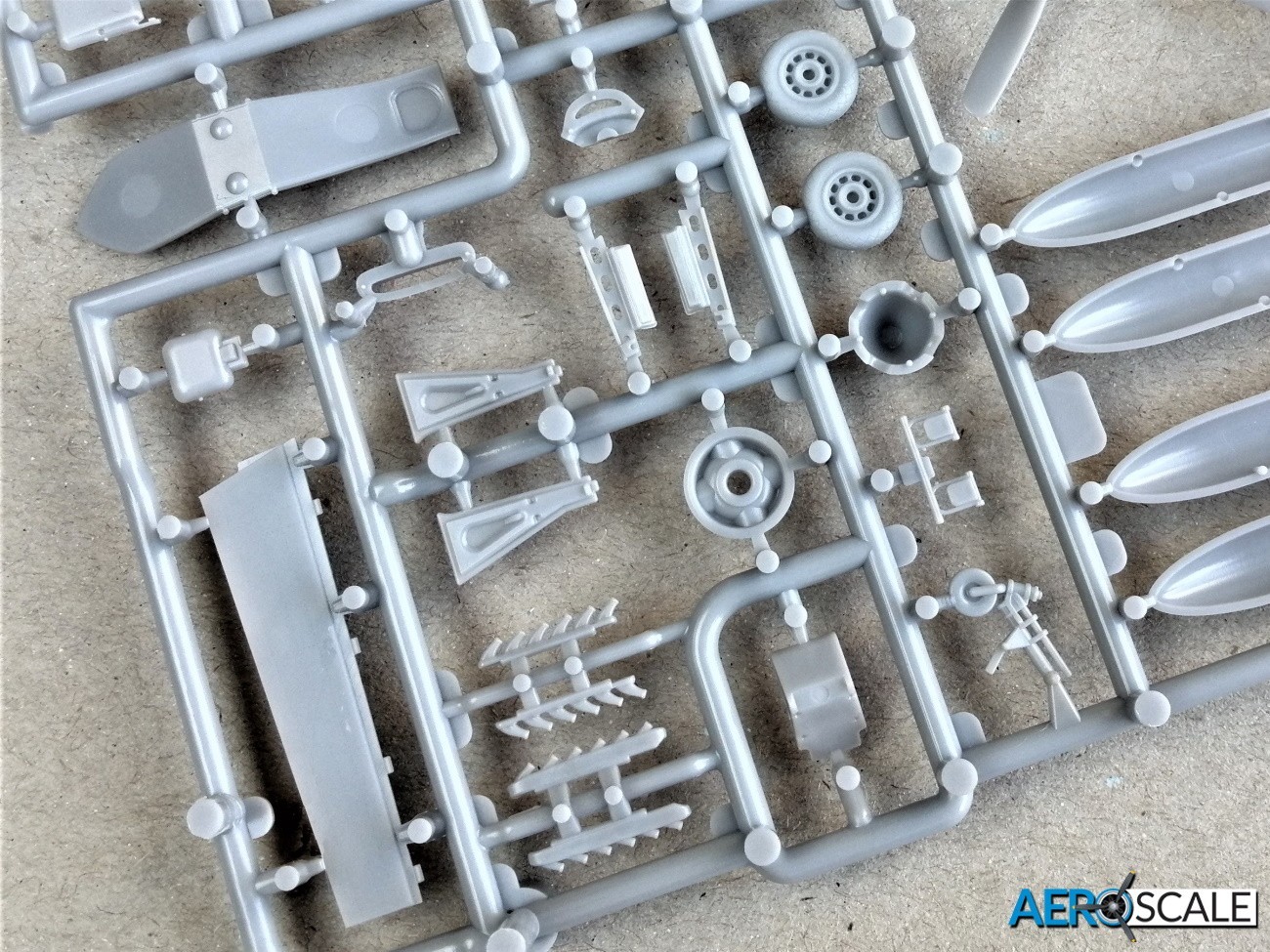 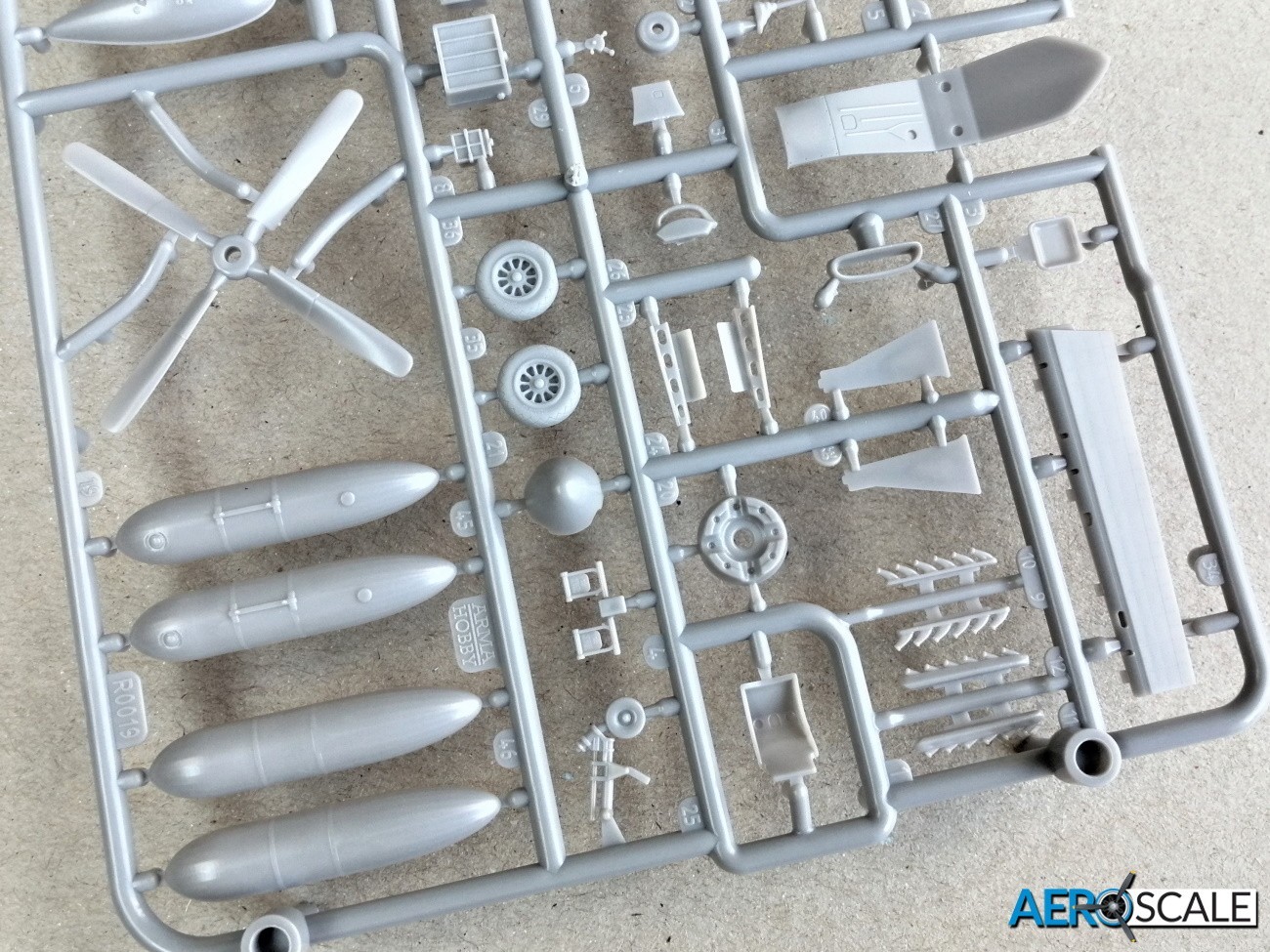 The kit includes the paper 108 gallon and aluminium 75-gallon fuel tanks. The ribbed construction of the paper tanks looks particularly good. Also included are two 250 lb bombs. The separate shackles are used for the fuel tanks and bombs. 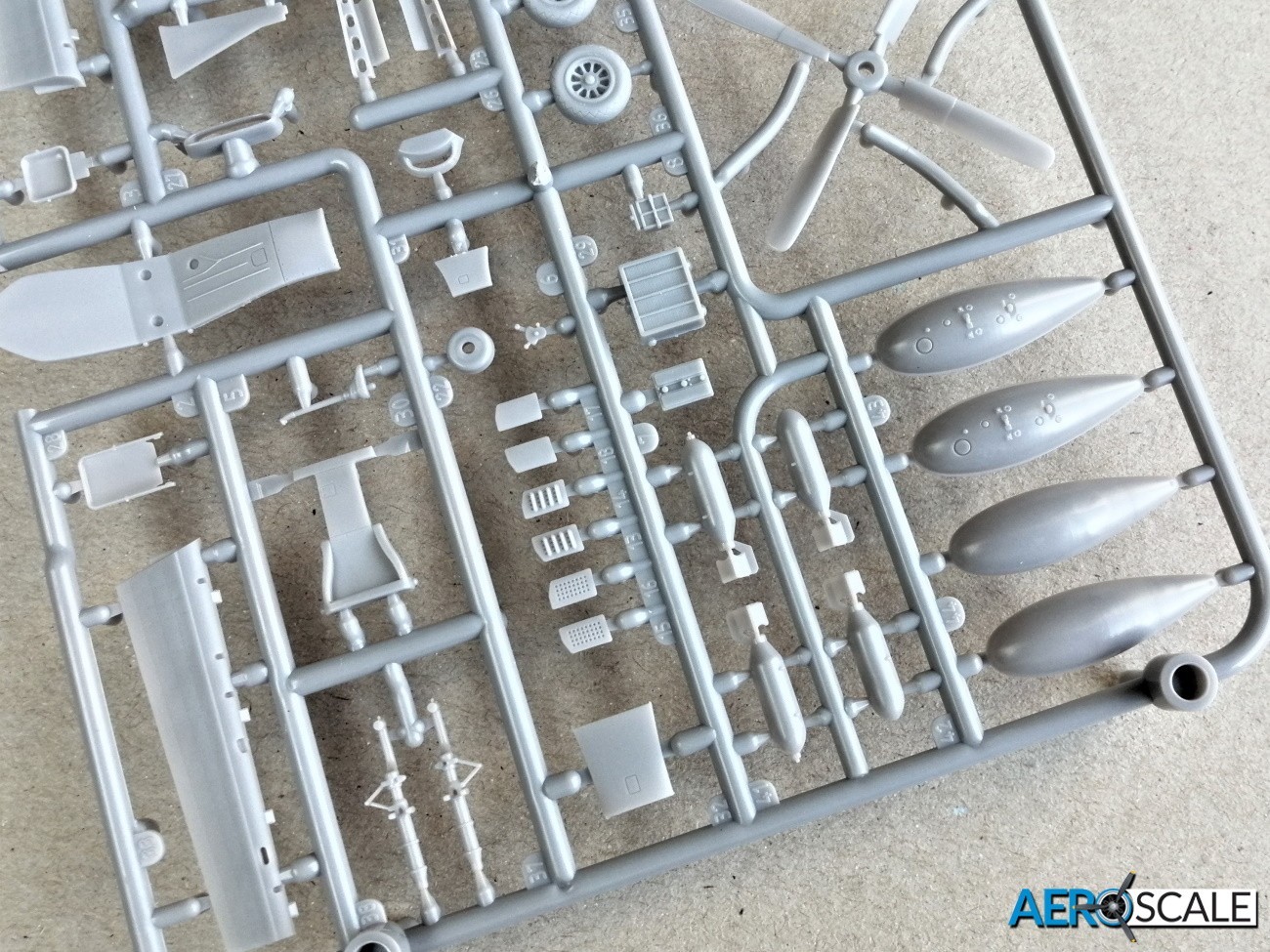 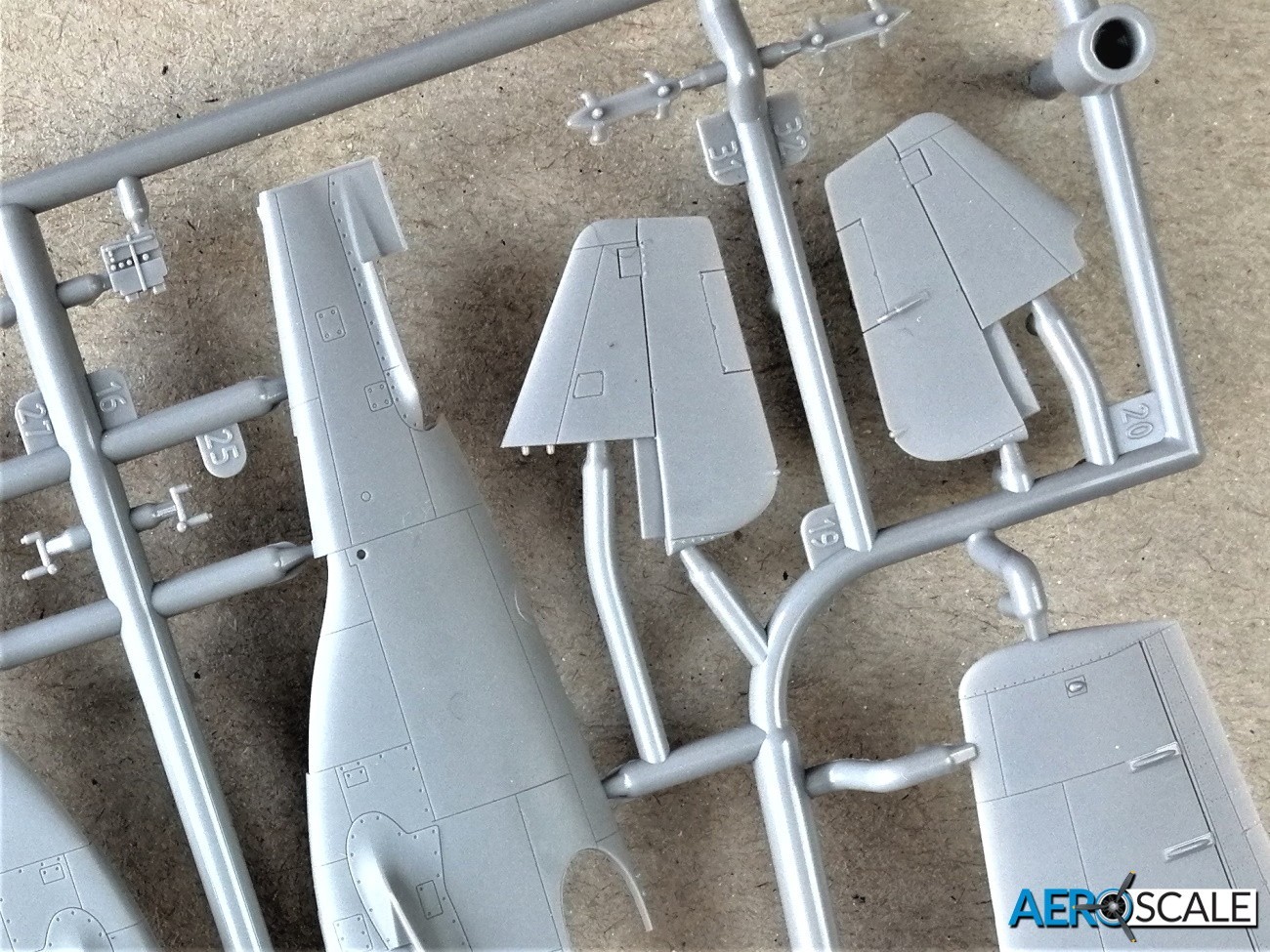 The Kabuki paint masks are for the glazed parts, fuselage fuel filler cap [?] and wheels. Oddly the instructions do not mention their use except for the mask for a tiny panel on the left side of the fuselage behind the exhaust. 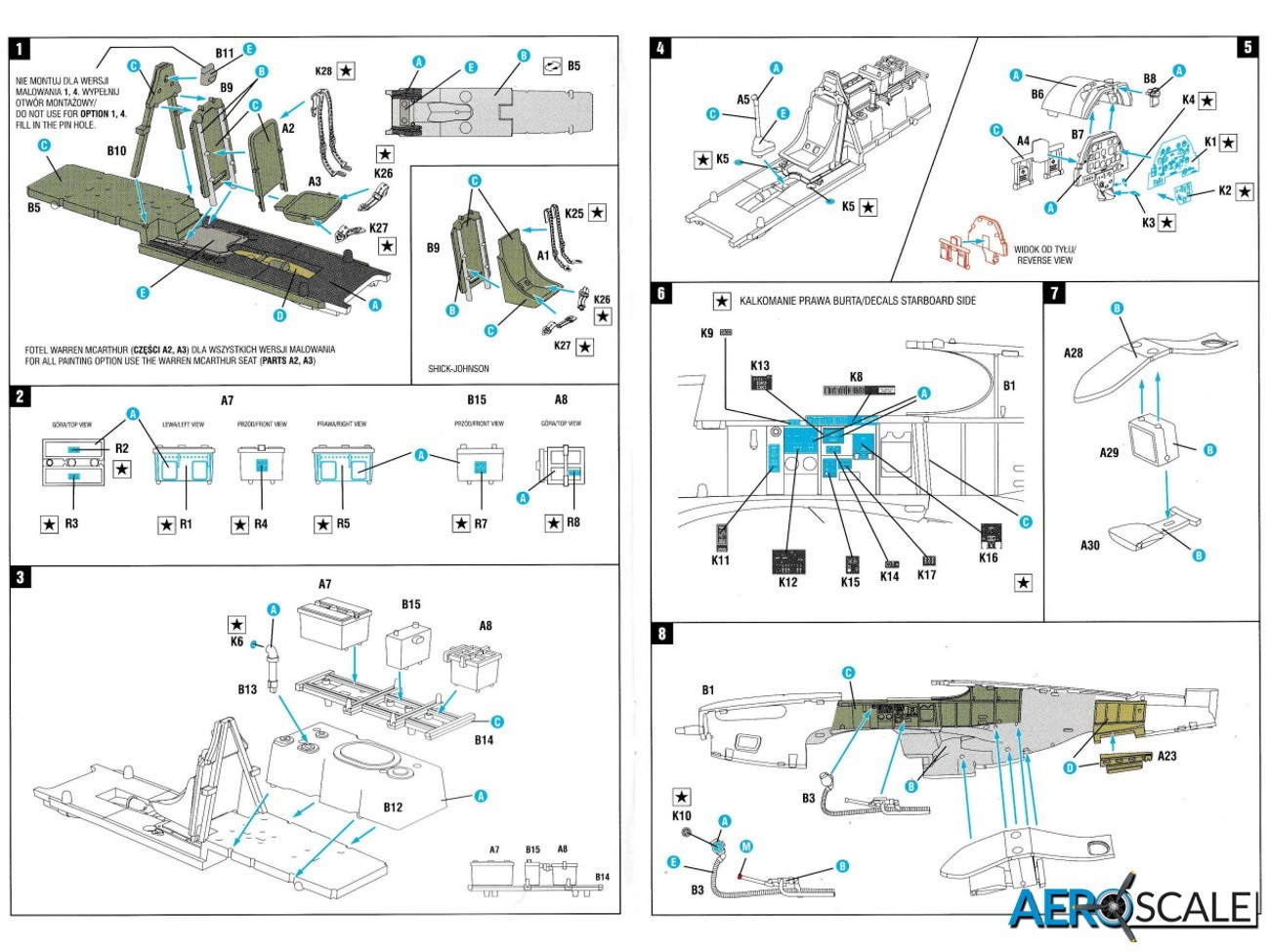 The decals printed by Techmod look superb: glossy, with good colour density and the definition is superb. Option ‘1’ and ‘3’ features checkerboard patterning on the nose and you will be pleased to know that it’s included on the sheet. Option ‘1’ has white walled main and tail wheels that are included as decals. There are no ‘invasion stripes’ included in the decals. 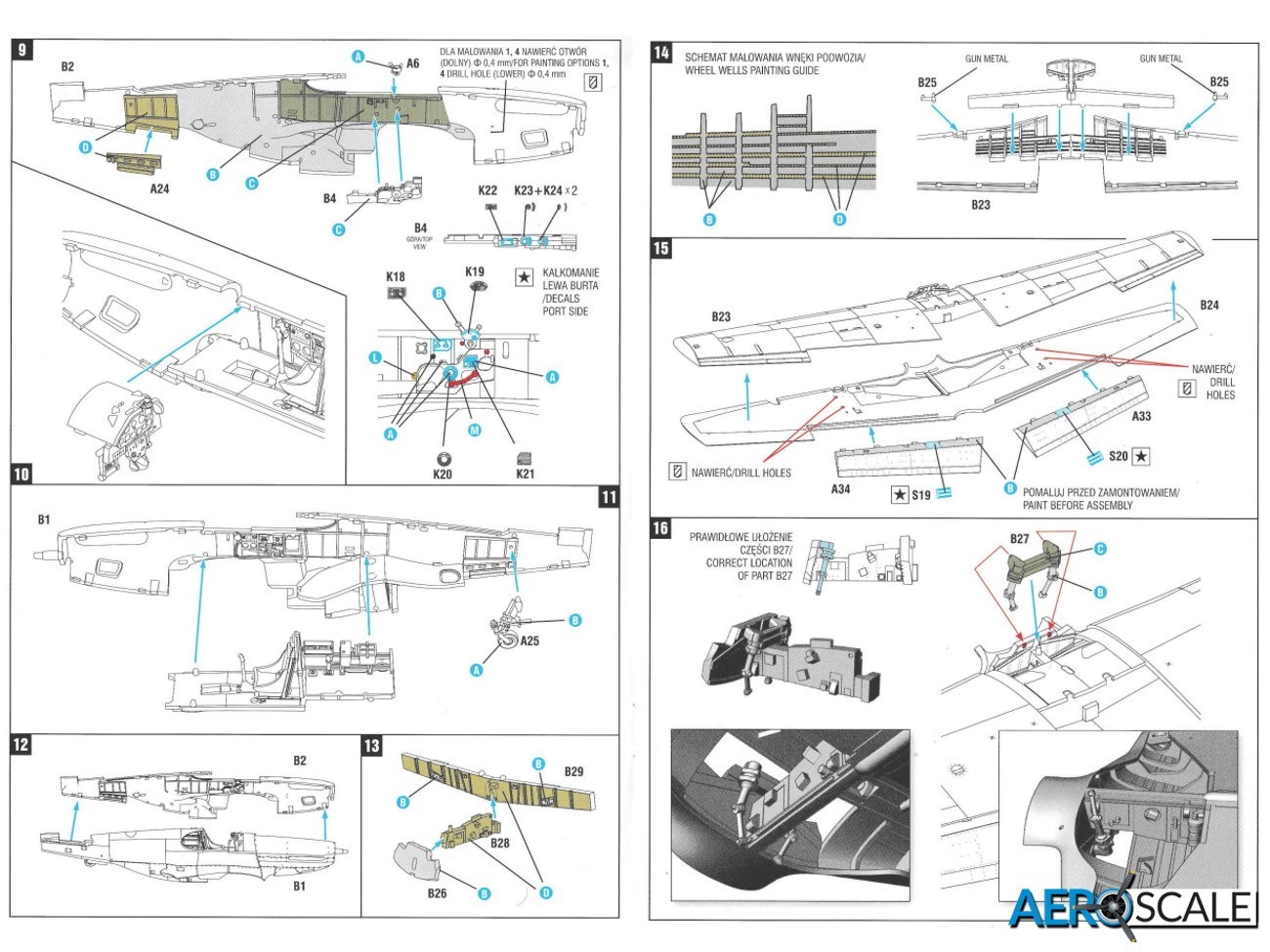 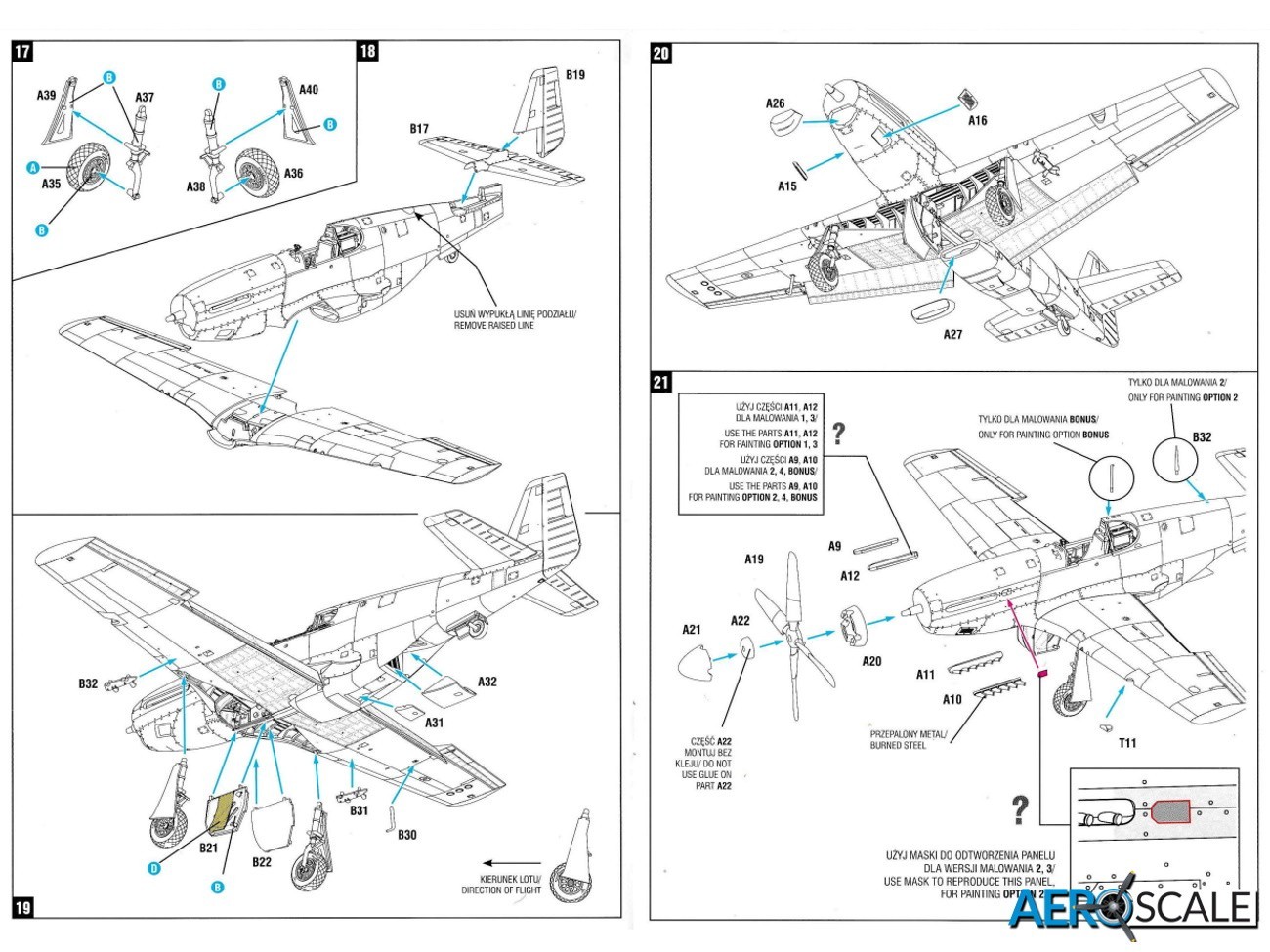 There are five marking options all for the 8th and 9th Air Force based in Europe. 42-106473/G4-N appears twice one with the nose entirely painted in red and yellow cheques.  The choices reflect well the Mustangs use as an escort fighter and fighter bomber. There is a good mix of camouflaged and natural metal subjects. As well as being personalised with names and artwork. Option ‘2’ has a rather scary toothy smile. 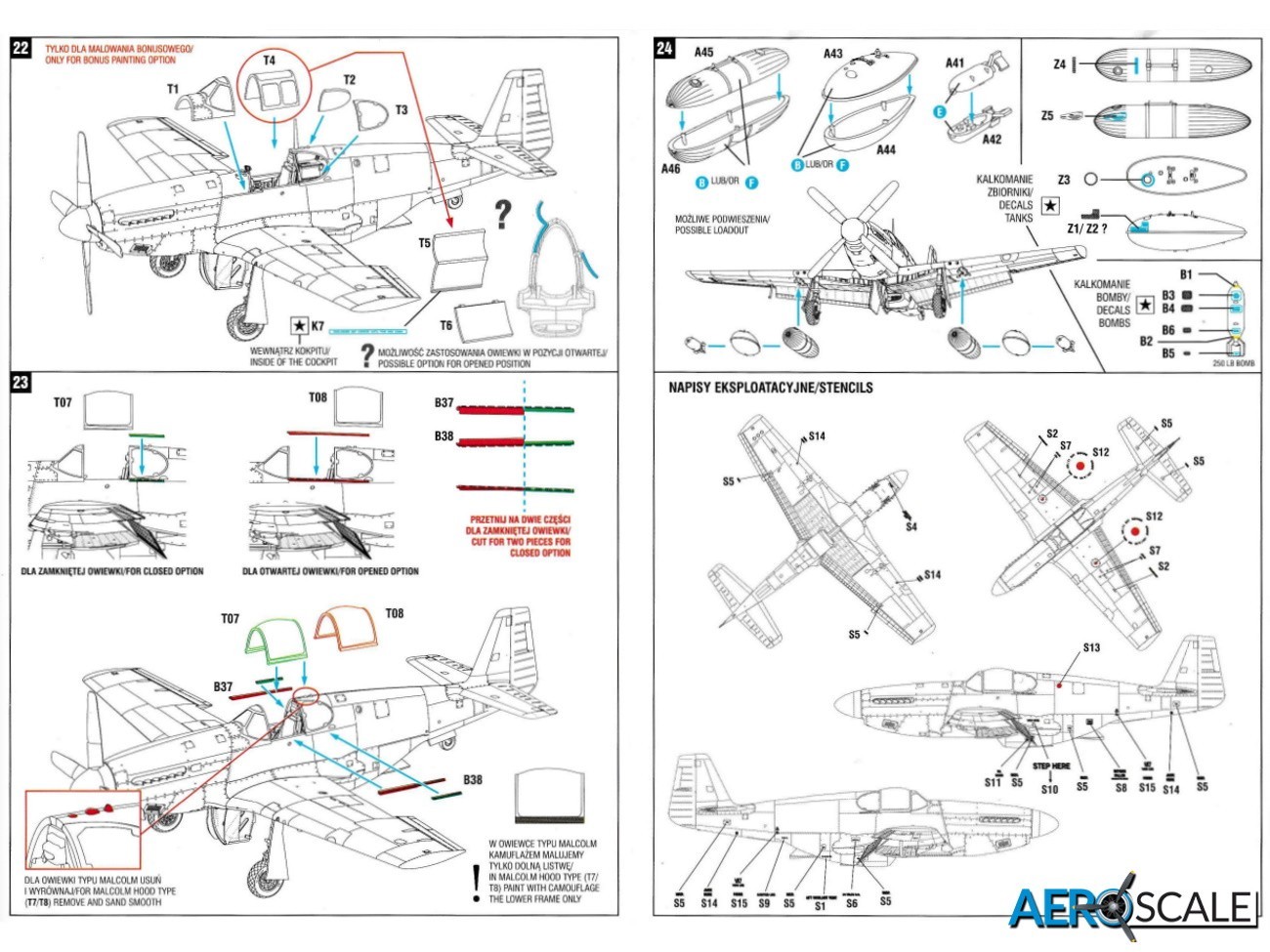 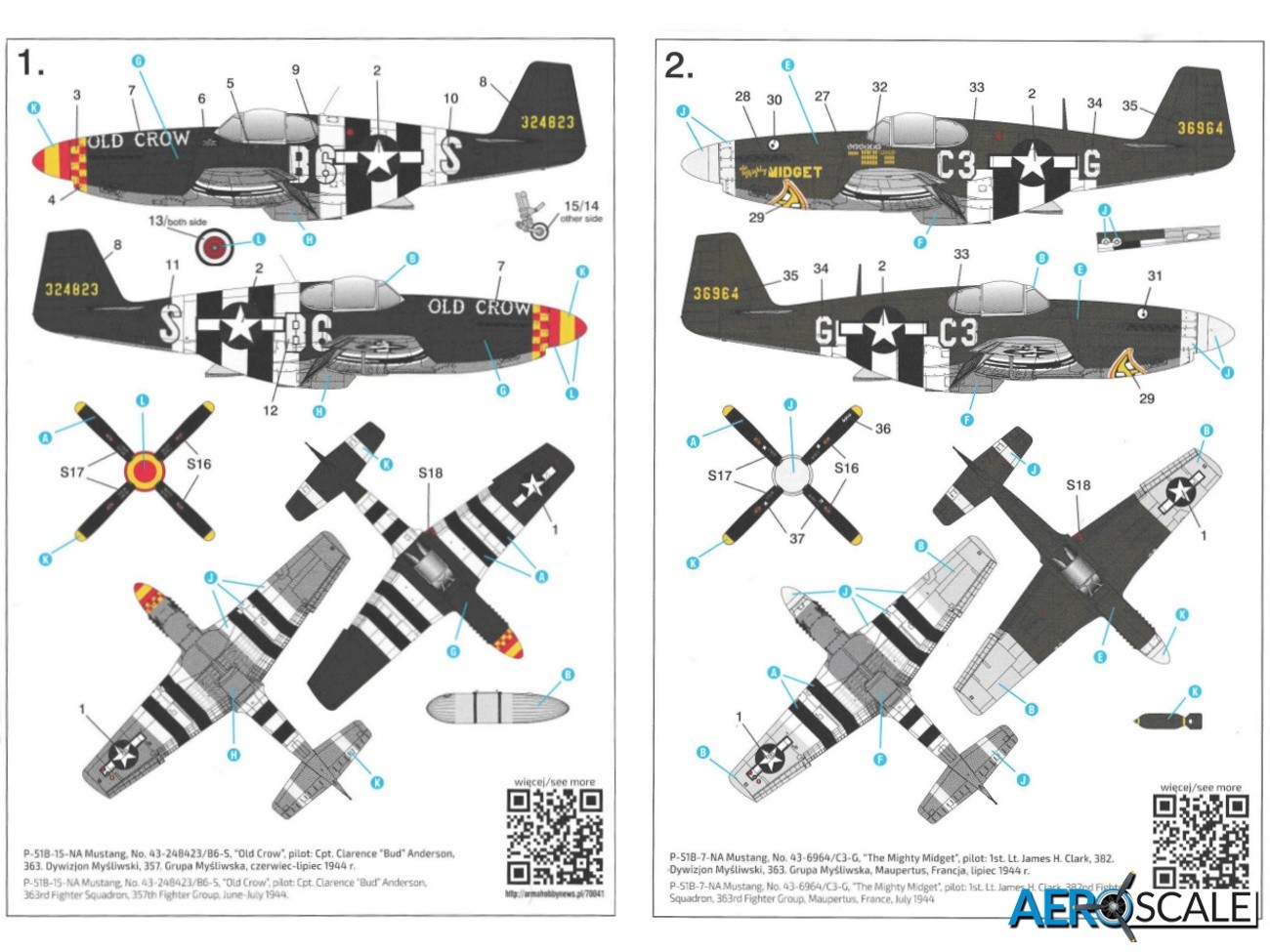 As previously mentioned, 42-106473 appears twice with significant differences in the paint scheme. The aircraft selected have impressive number of mission and kill markings. 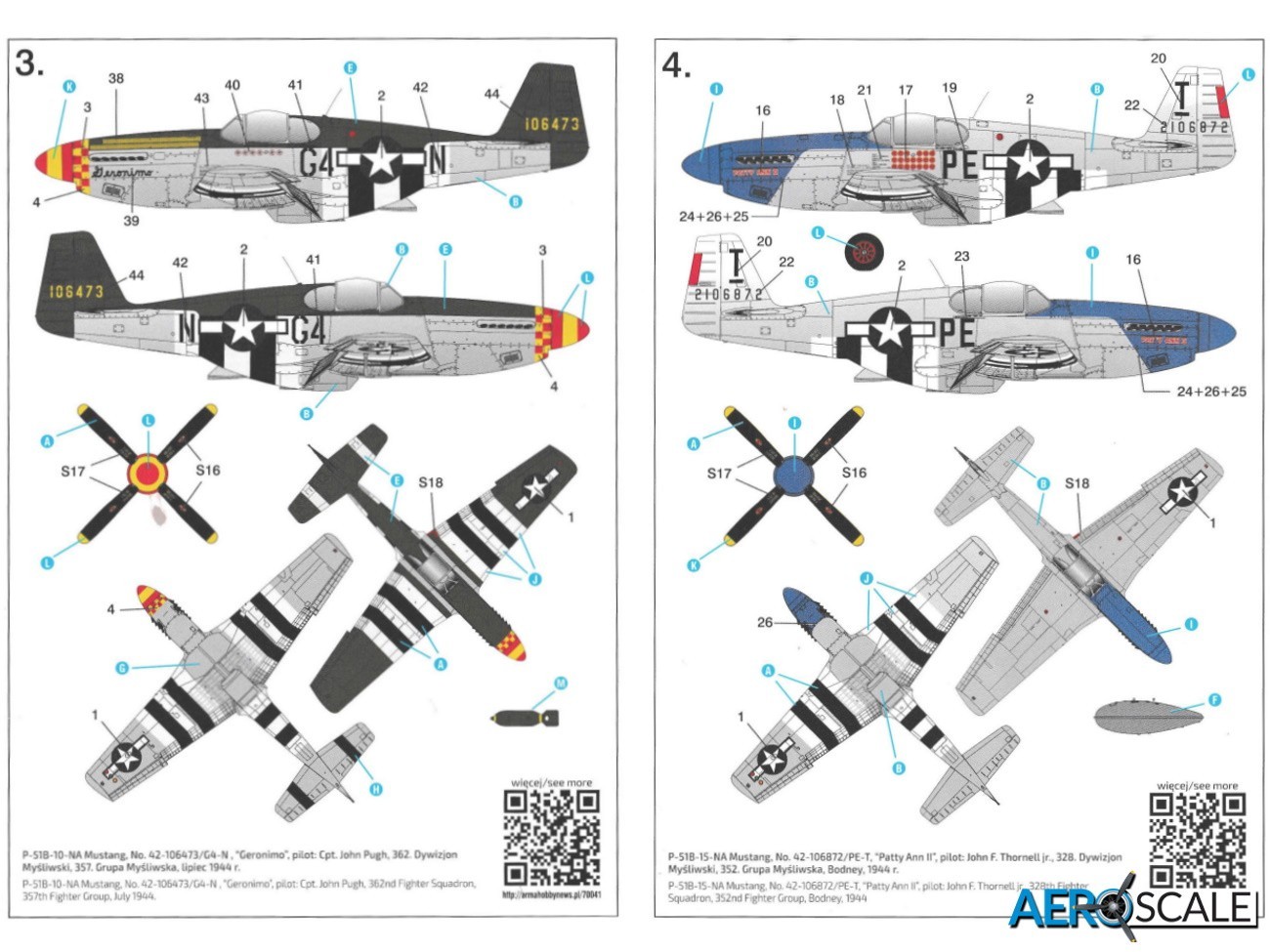 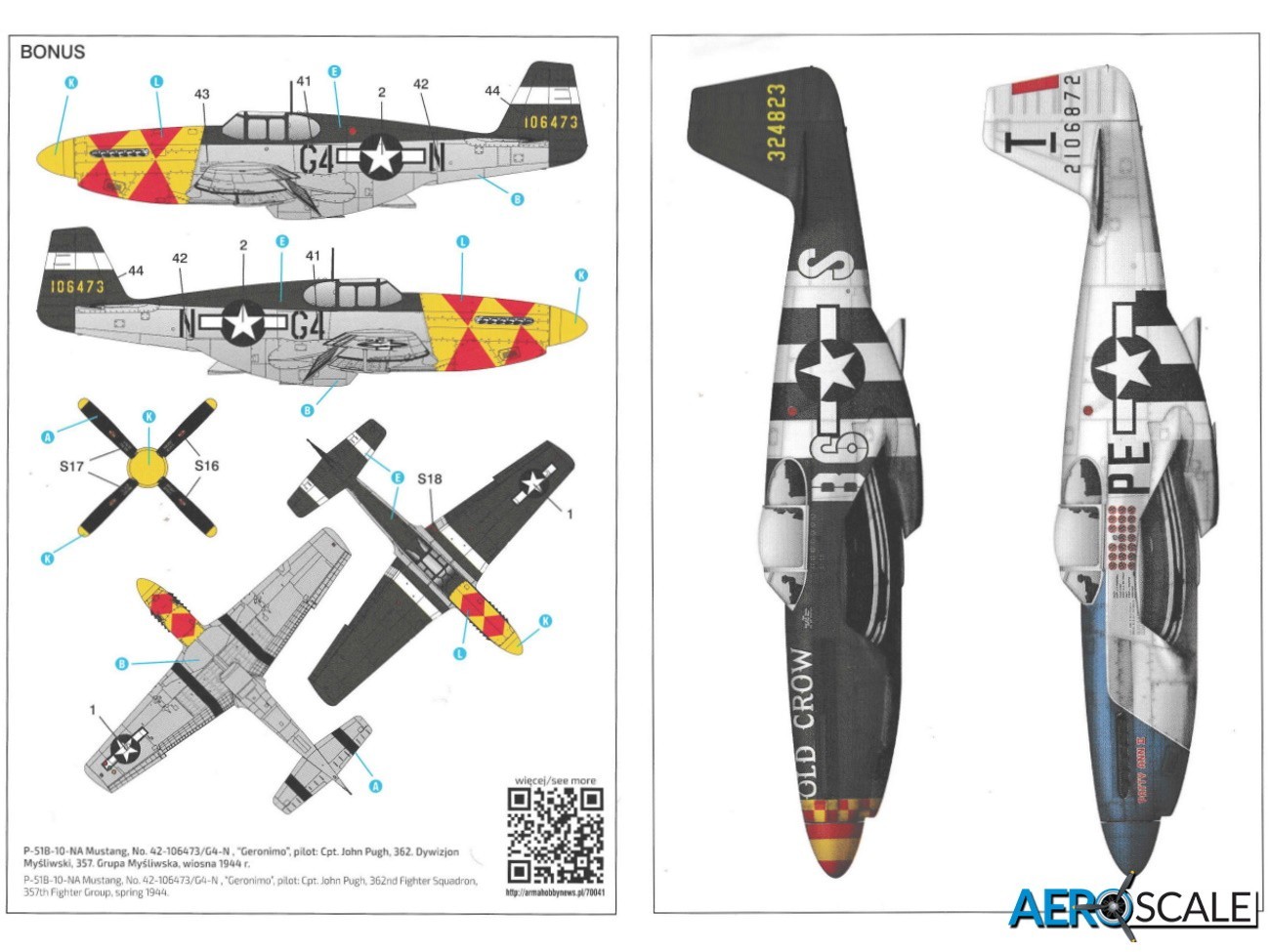 The instructions and painting guide is printed in a A5 16-page manual. Instructions look straightforward, just be aware of the various options for the aircraft you select markings wise. The painting guides are in colour and provide four view drawings of each aircraft. There are also smaller drawings for detailing the prop, wheels, drop tanks and bombs.

Its great to see this edition of the P-51B focusing on the USAAF operating over Europe. The amount of research and detail Arma Hobby has done in producing this kit is evident. The quality of the  detail is on a par with the likes of Eduard, which is very high praise.

Many thanks to Arma Hobby for this review sample.