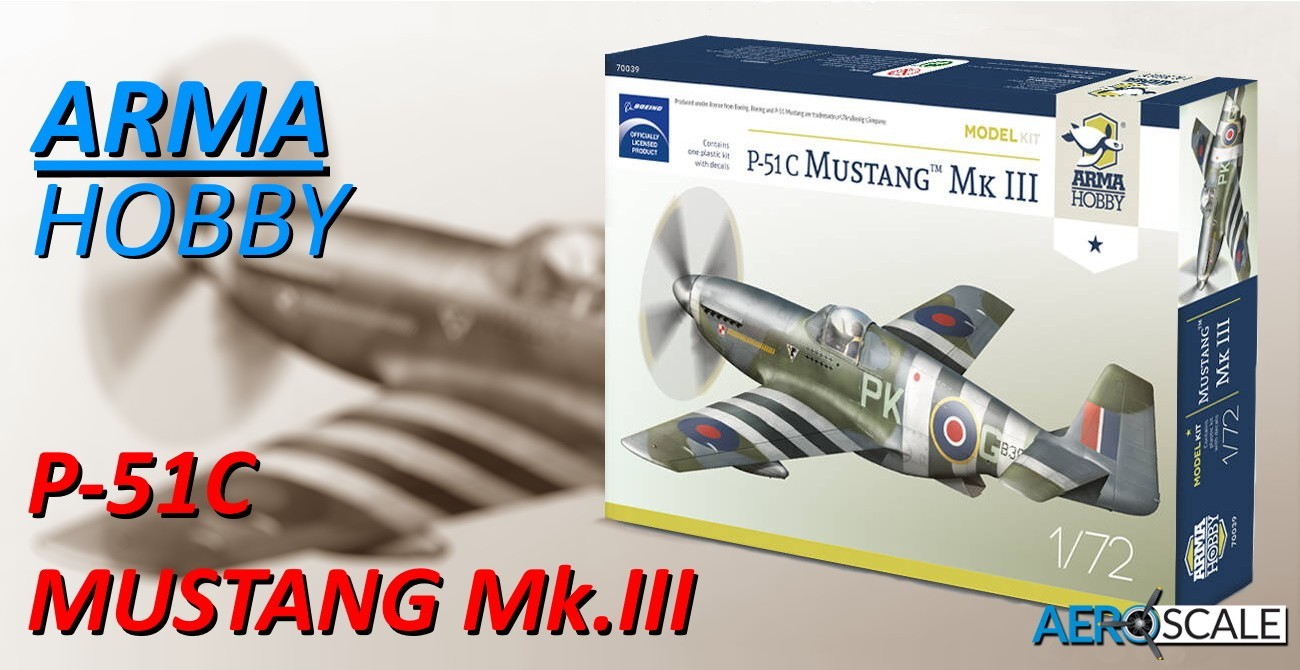 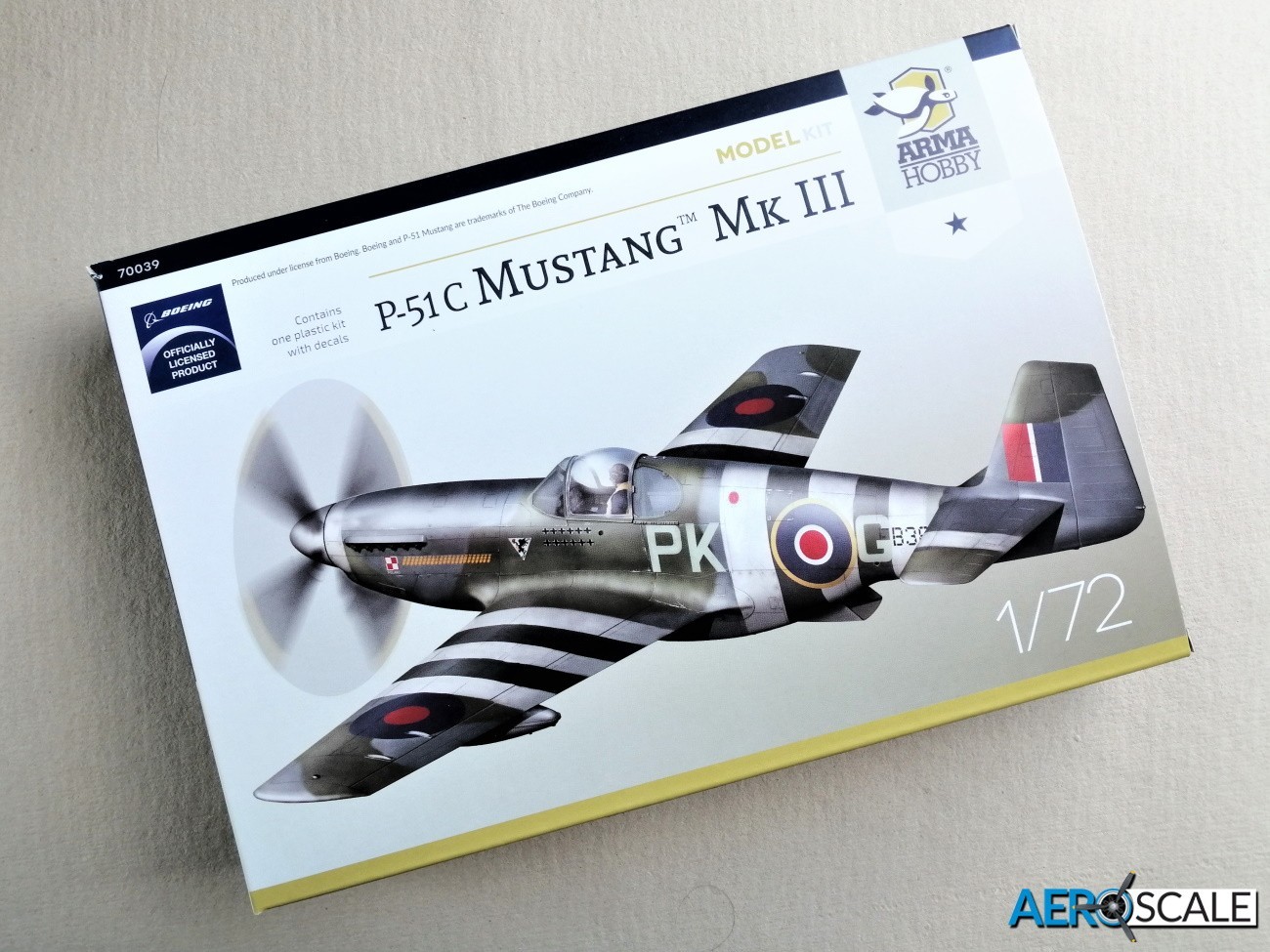 The Mustang Mk.III was basically the P-51B/C fitted with the Packard V-1650-3 Merlin, a licence-built version of the Rolls Royce Merlin 63 engine. This pairing transformed its performance at altitude compared to the earlier Allison V-1710 engine. This release is based on the P-51C-1-NT (NA-103), built at the Dallas, Texas facility. Ironically despite its improved performance at altitude, the RAF Mustangs used the medium-altitude rated Packard Merlin V-1650-7. It went into service with the RAF during the summer 1943.The RAF saw the Mustang as an excellent ground attack and tactical reconnaissance aircraft. It conducted many ‘Rhubarb’ missions over Europe destroying  targets such as railway locomotives, parked aircraft barges and road vehicles. Although the improved performance of the Mustang Mk.III was welcomed, the taller pilot found the experience of flying a great discomfort particularly on long mission. The Malcom hood was adopted not just for the taller pilot’s comfort, but also addressed partly another criticism, the poor rearward view. The sliding Malcom hood also made it easier for the pilot to escape a damaged aircraft. 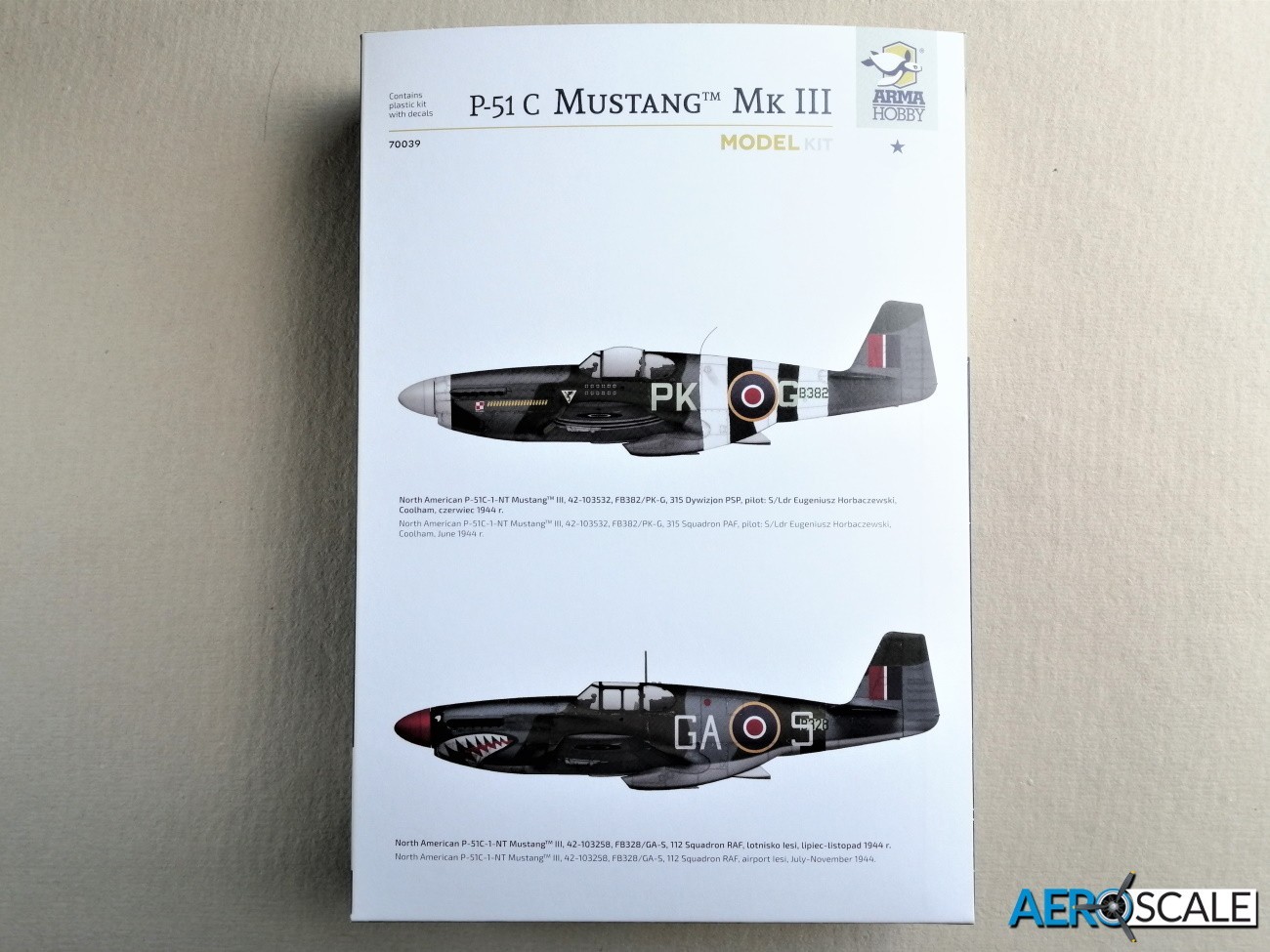 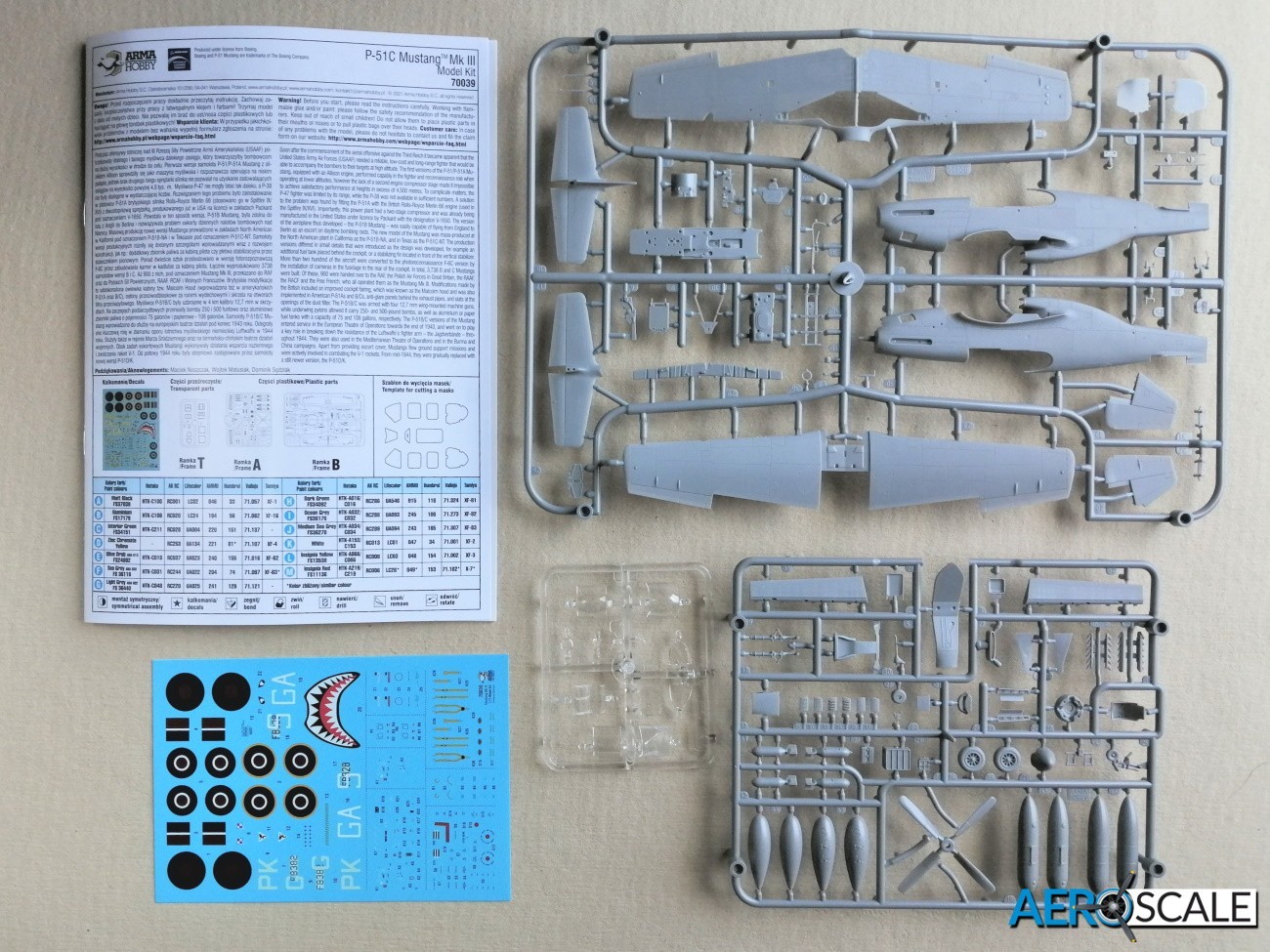 The contents of the kit are contained in a side opening box. All the contents are placed in a single bag and inside are separately packed clear parts with the decals placed inside the instructions. Taking the sprues out of the bag there’s a real wow factor looking at the quality of the recessed detail. Its crisp and sharp, consistent and quite subtle. 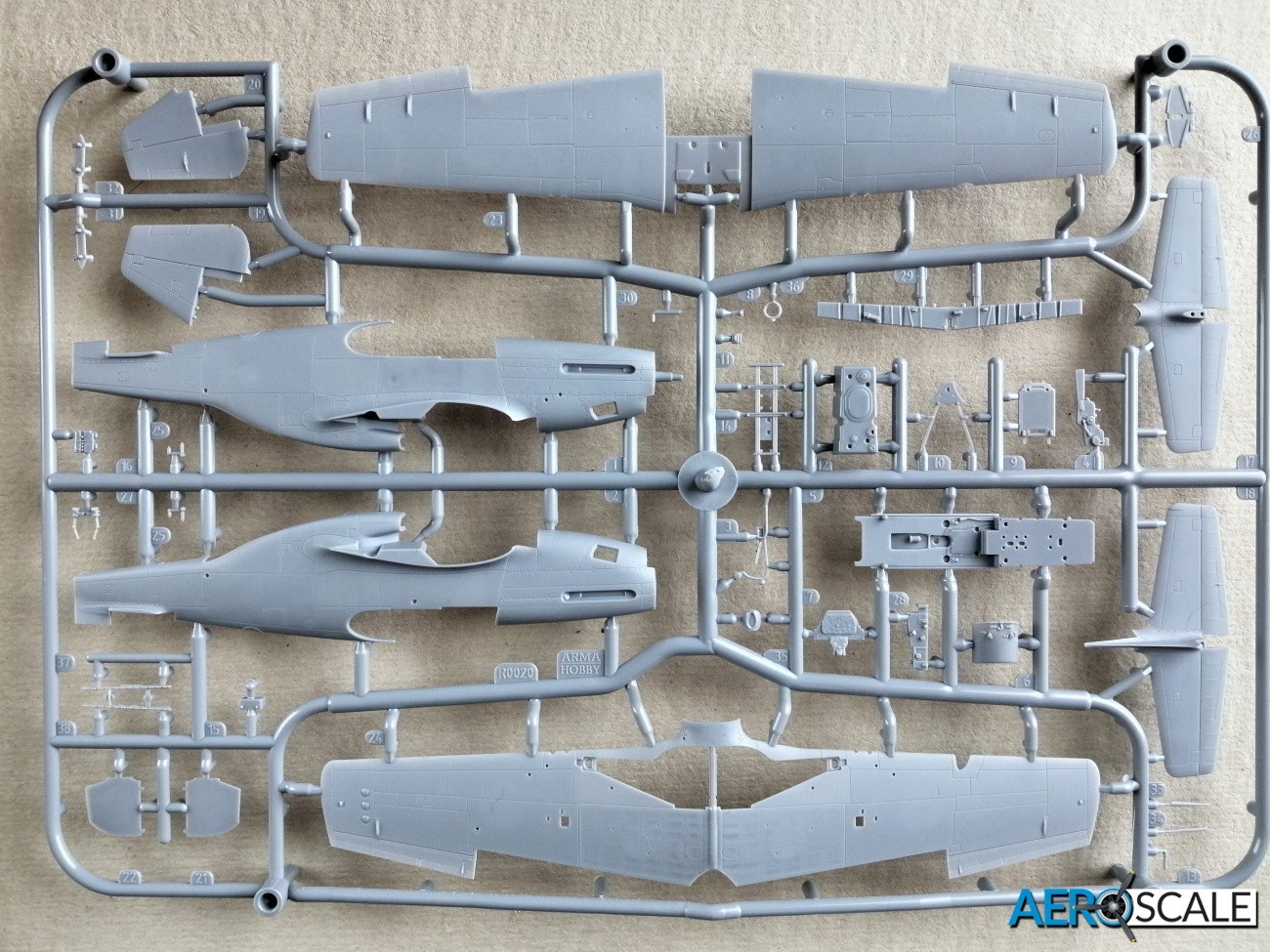 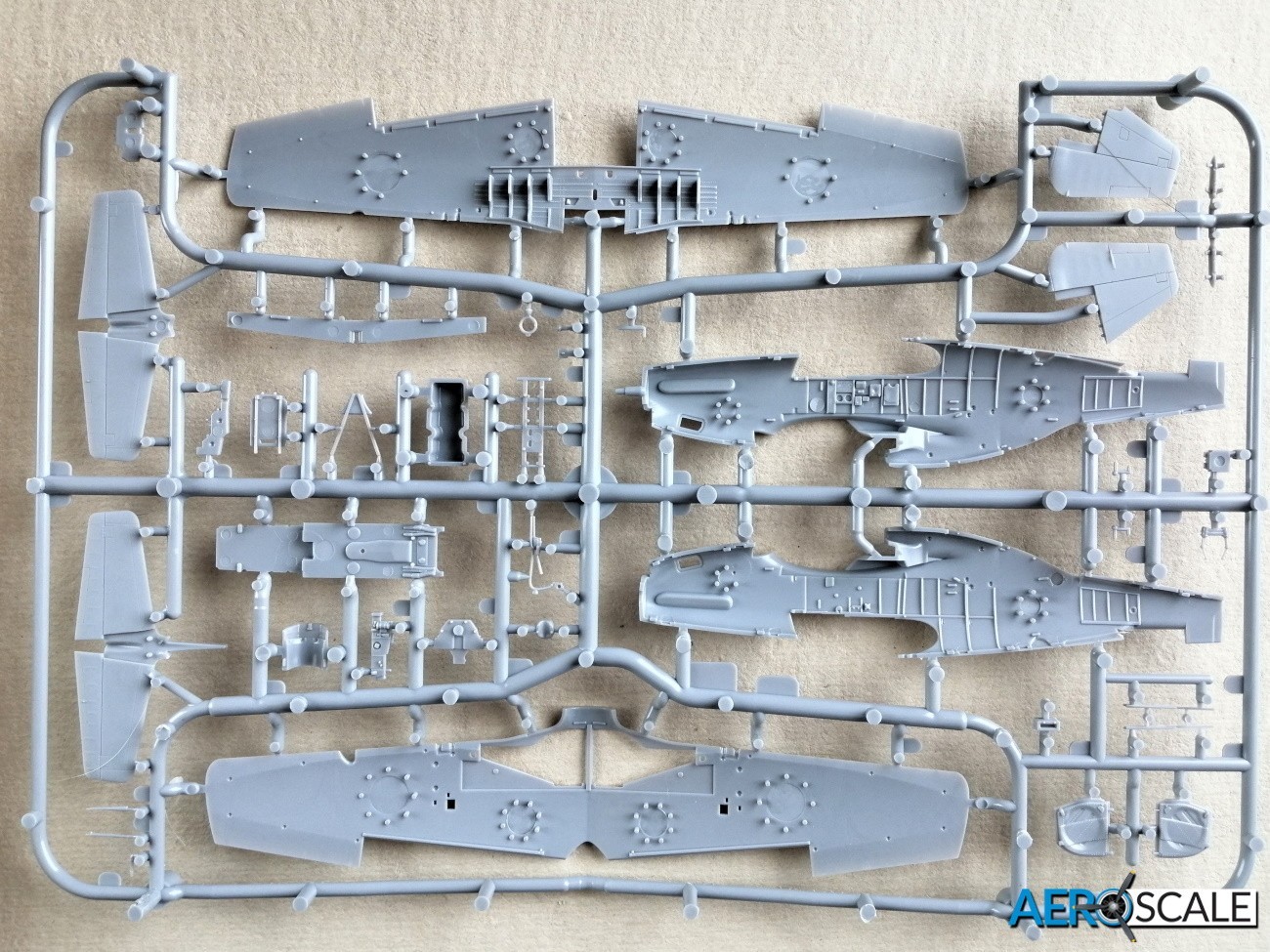 There is an excellent amount of detail in the cockpit. The detail on the plastic is impressive and this is backed up with quite a few decals replicating instruments and switches. The side walls of the cockpit and the tail wheel bay are detailed with raised rib work. There is a price for all the lovely detail though as is evident from very slight sinkage on the exterior of the cockpit area. It’s so slight it might be easier to sand it out rather than filling then sanding. Additional detail for the sidewalls includes throttle and electrical boxes. There are around fifteen decals making up the detail on the sidewalls. There are two types of seats: Warren McArthur or Schick Johnson, depending which marking option you go for. This means also that there are two different types of decal seat harness included by ARMA Hobby. Detail extends to the rear of the pilot with separate parts for the radio equipment and battery. Again, there are decals to add to the detail. 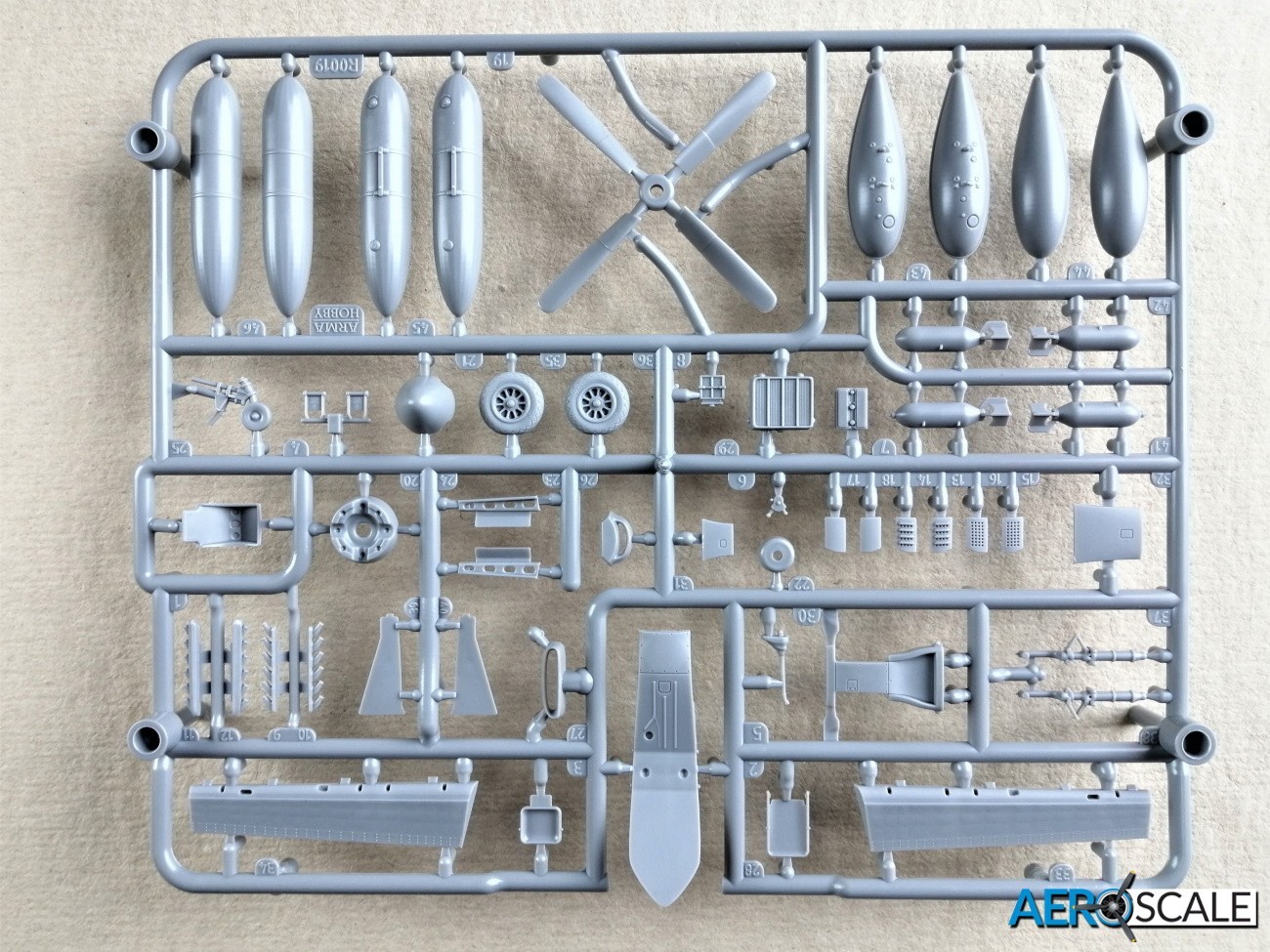 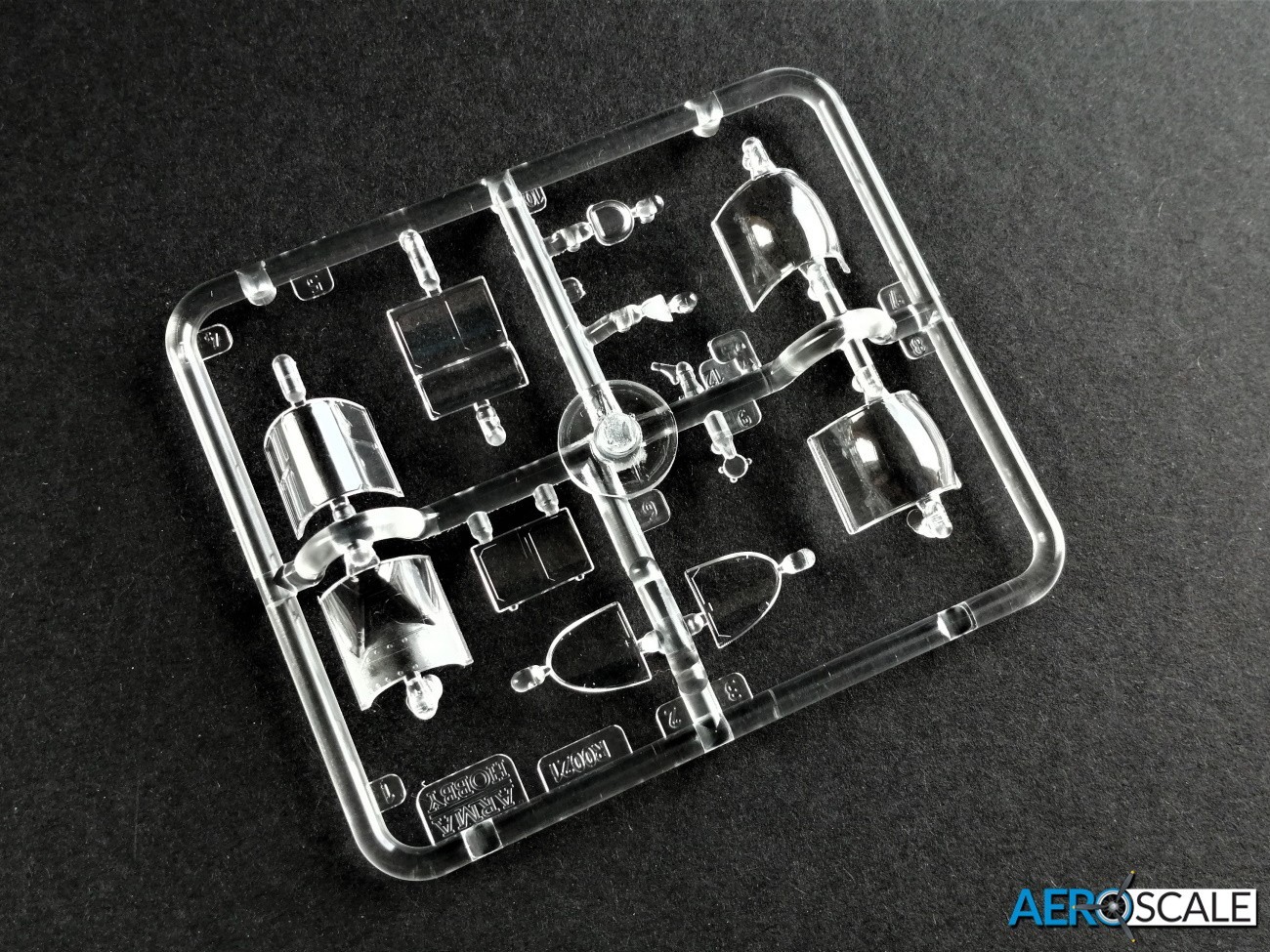 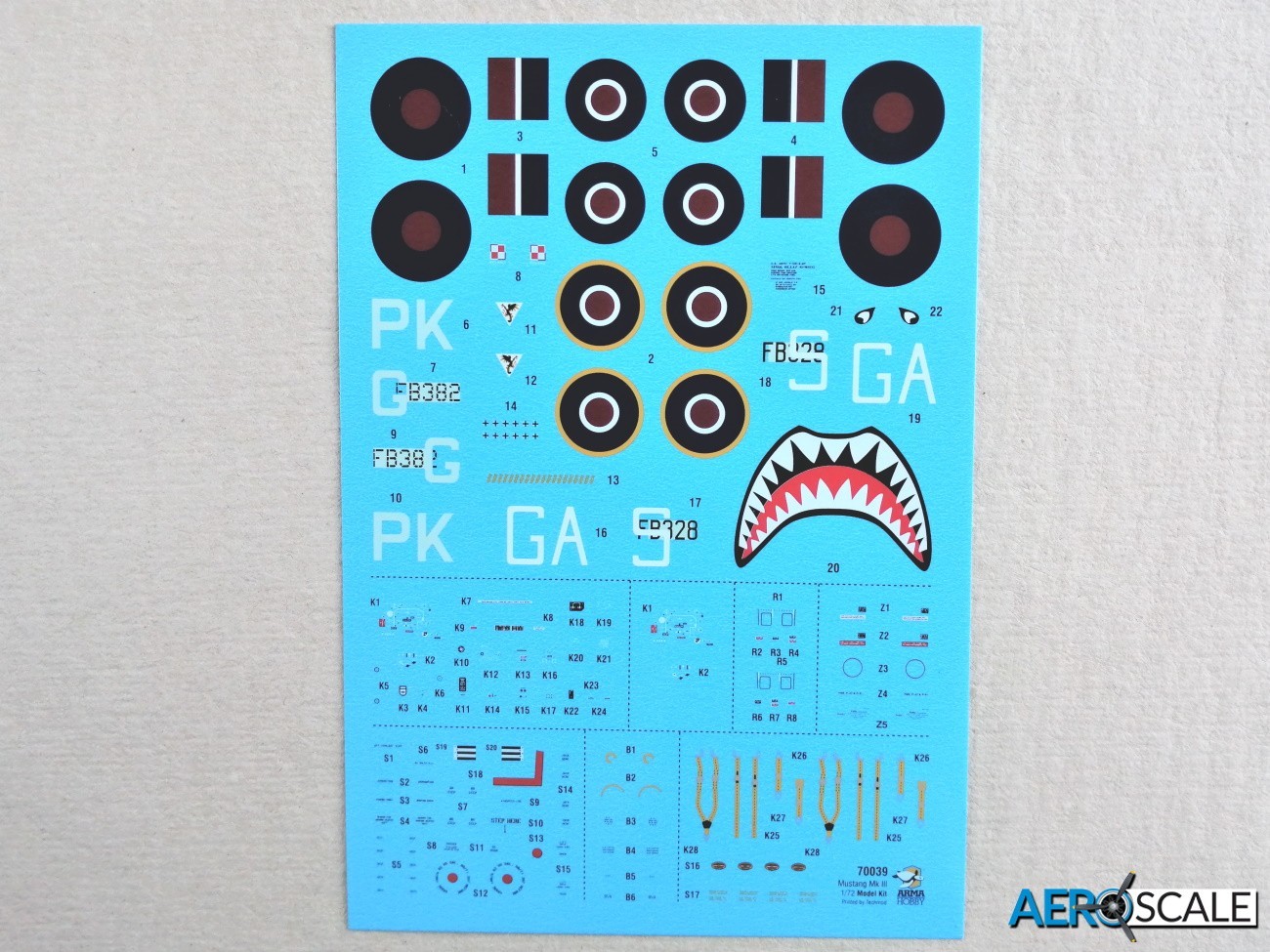 The kit offers two types of canopies: the hinged flat framed or Malcom hood. There are five clear pieces for both canopy types and both can be modelled open. The open position of the flat framed is moulded in one piece, making life much easier to fit. There are two versions of the hood rails, depending on whether you are modelling the hood open or closed. 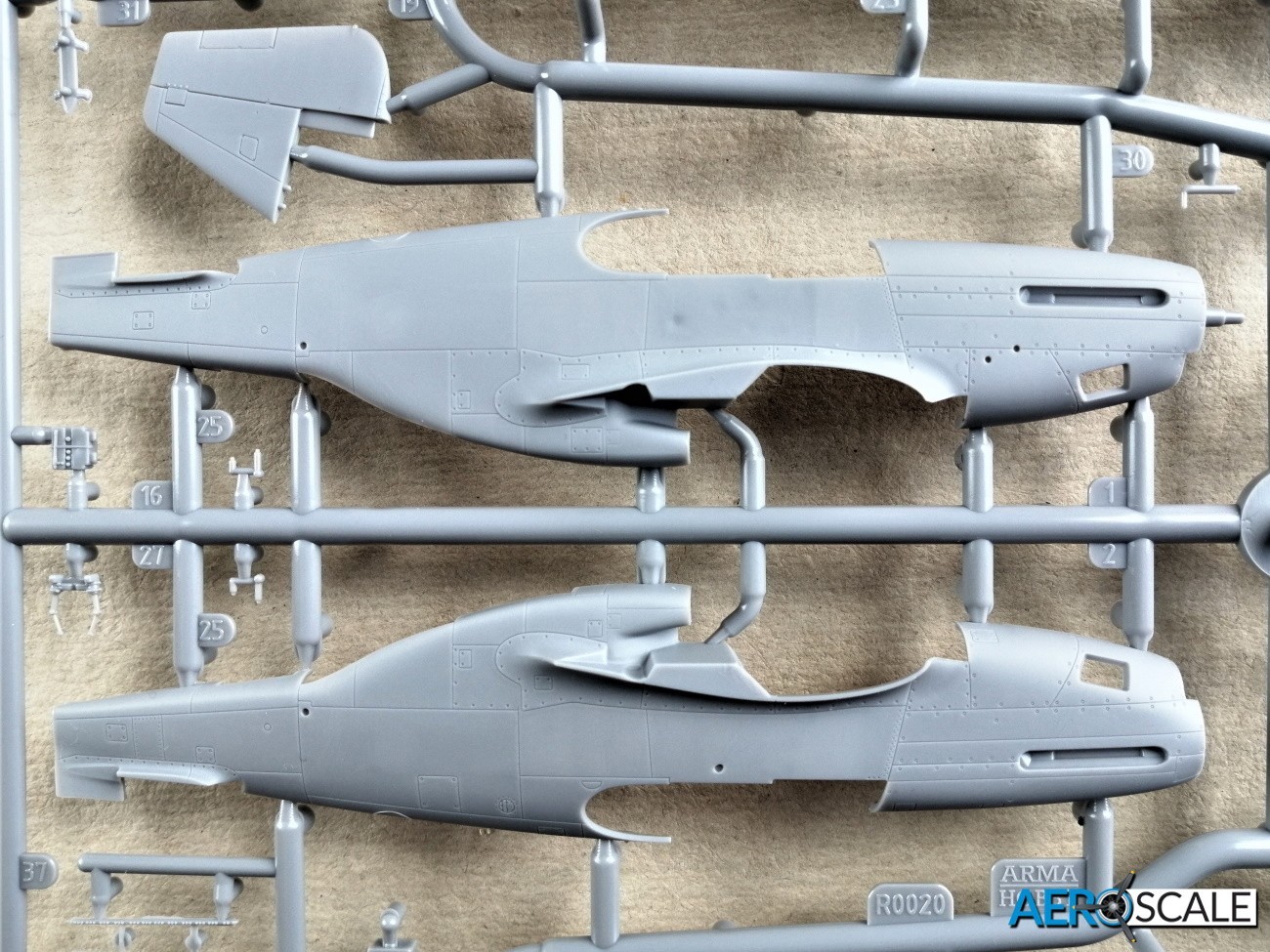 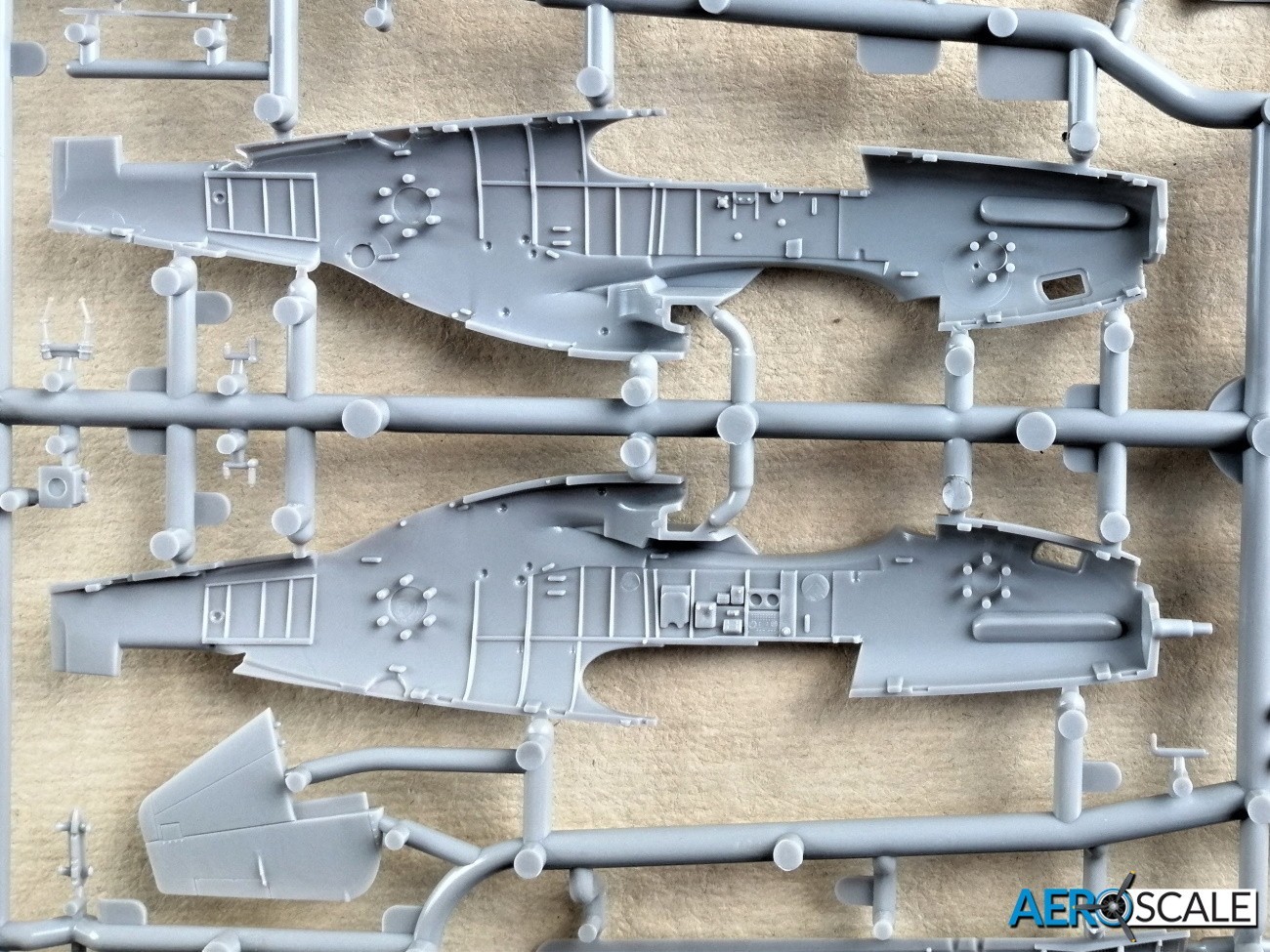 The fuselage halves are tailless as there are parts for the filleted or non-filleted tail. For this release only the early none filleted tail is used. There are two styles of vent for the carburettor air intake and there is a blank piece that was used in cold weather. The two marking options are fitted with the perforated style. The kit comes with the Hamilton standard cuffed propeller and there is a choice of two styles of exhaust. One has the shielding protecting the pilot from glare which was used principally on the RAF Mustang Mk.III. The air duct under the fuselage is also a focus for a number of detailed parts including two PE. This release features the filler cap for the self-sealing fuel tank aft of the pilot's seat that started with P-51B-5-NA or block 5. 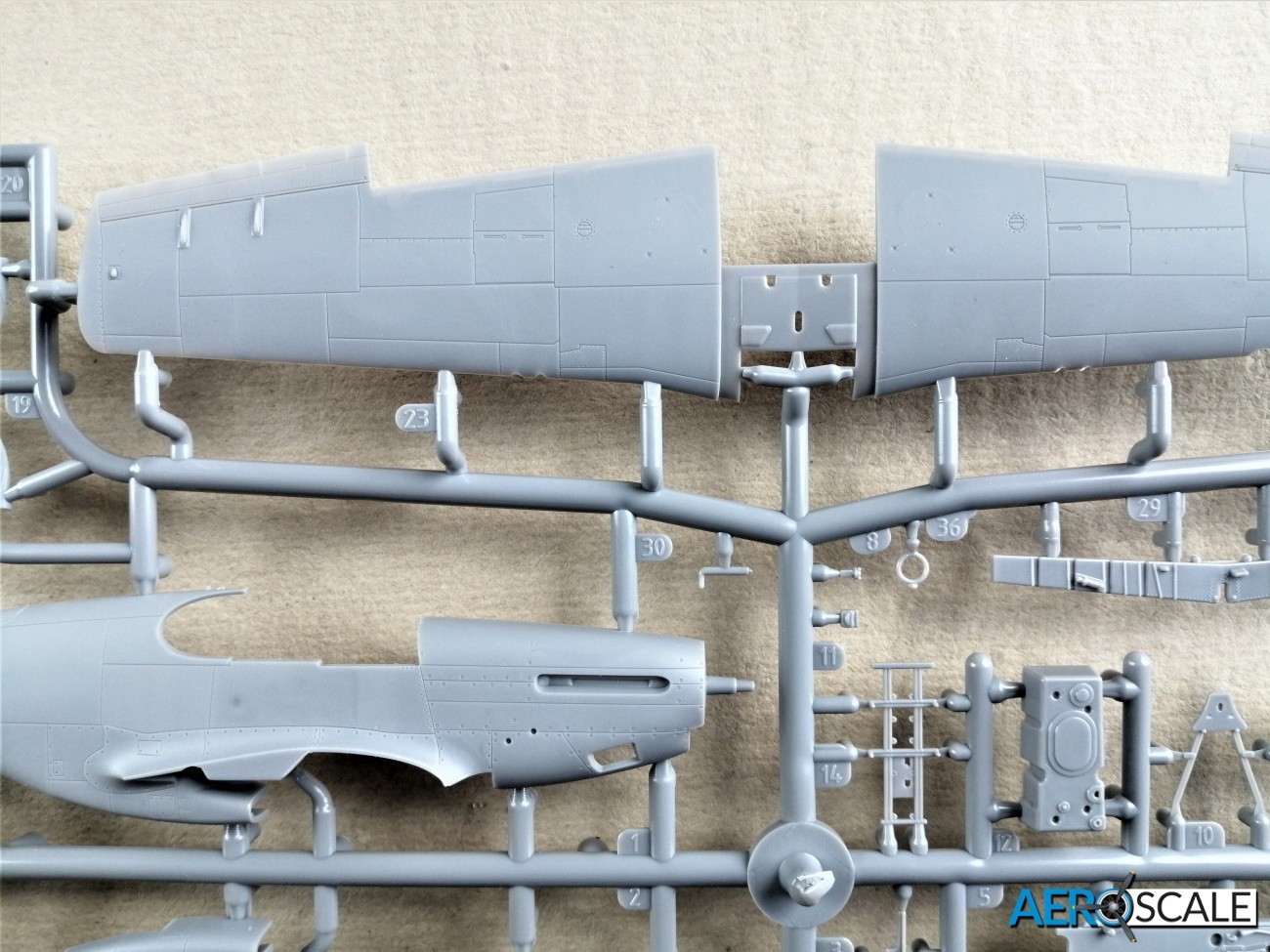 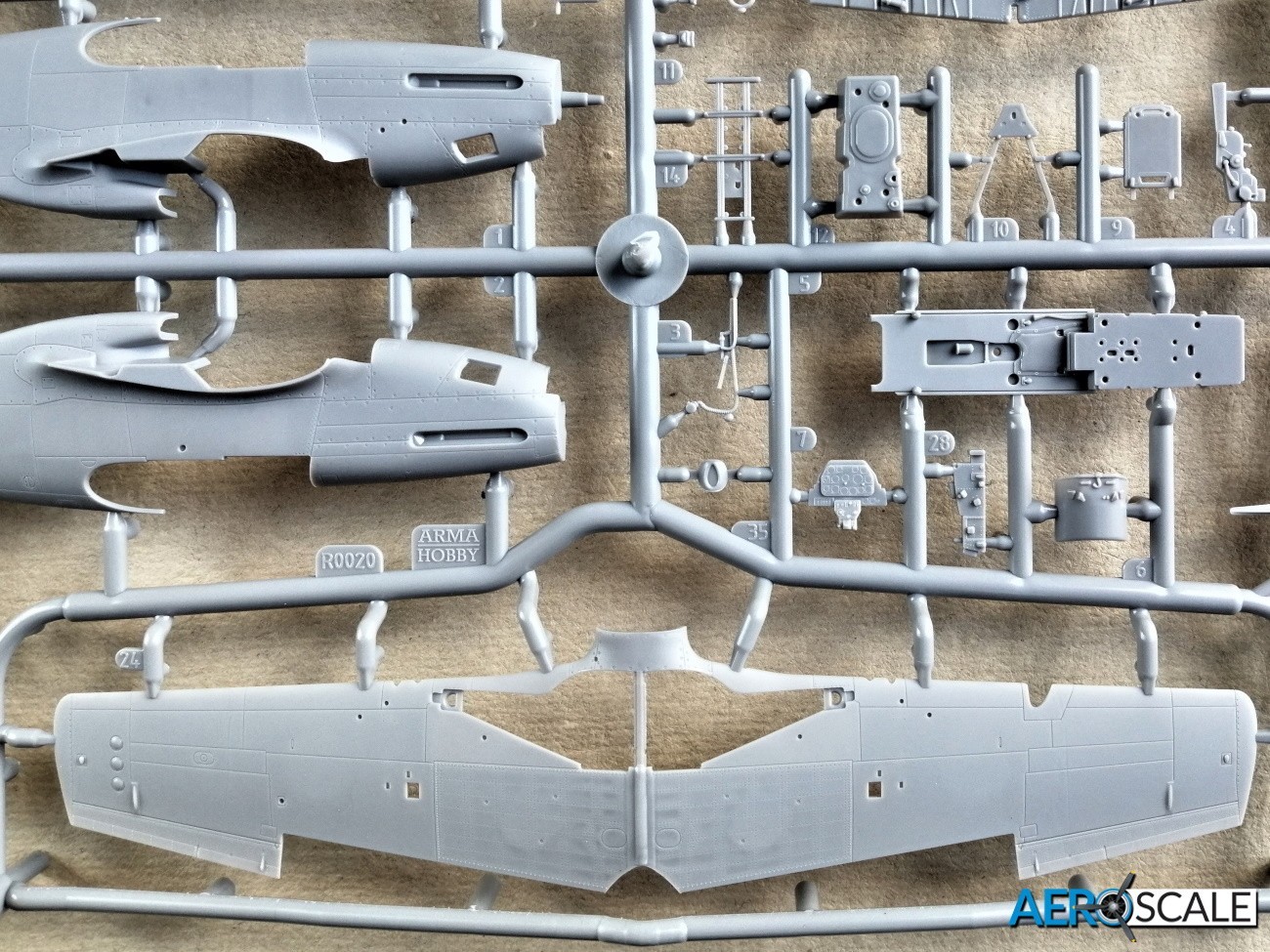 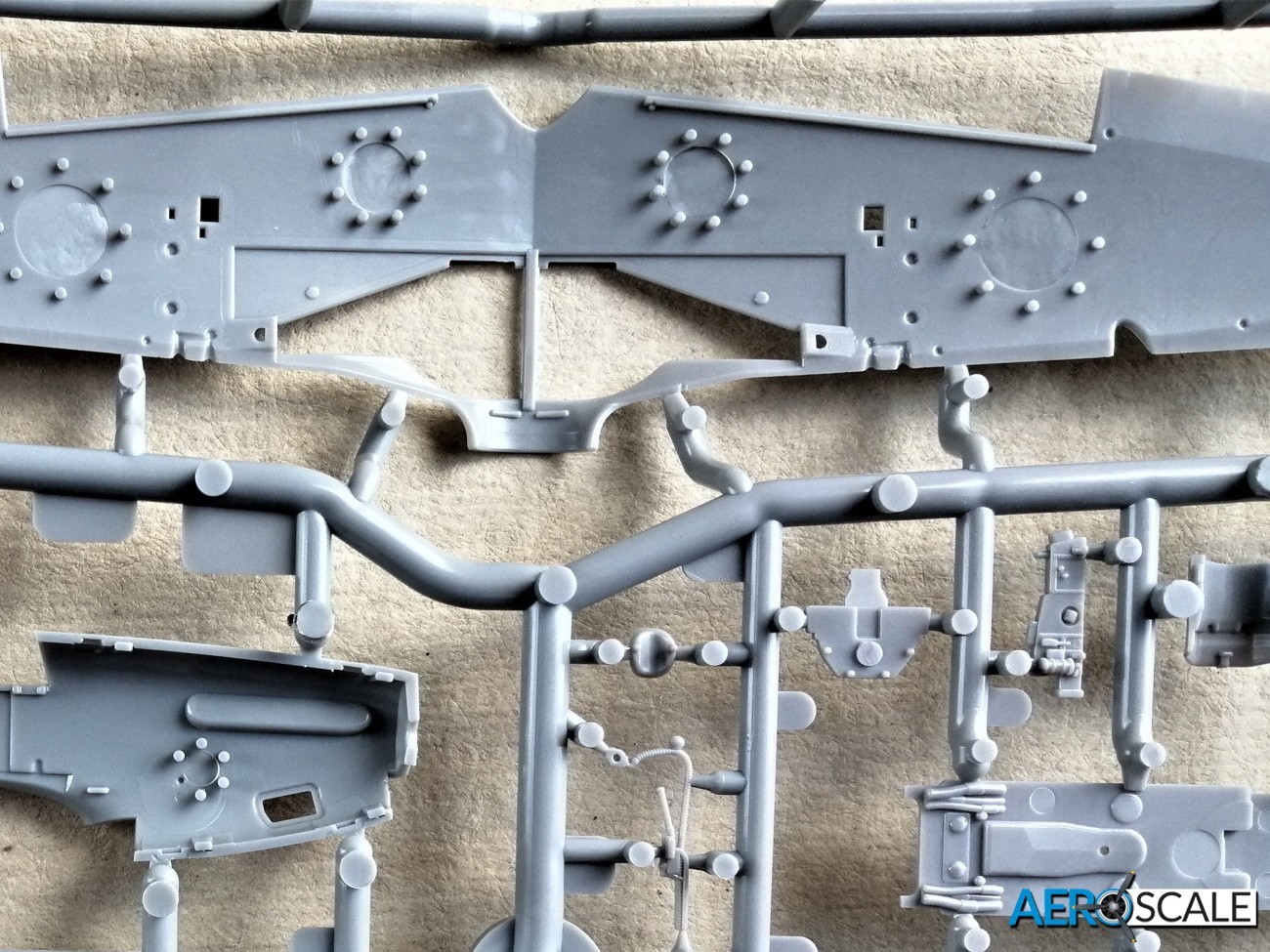 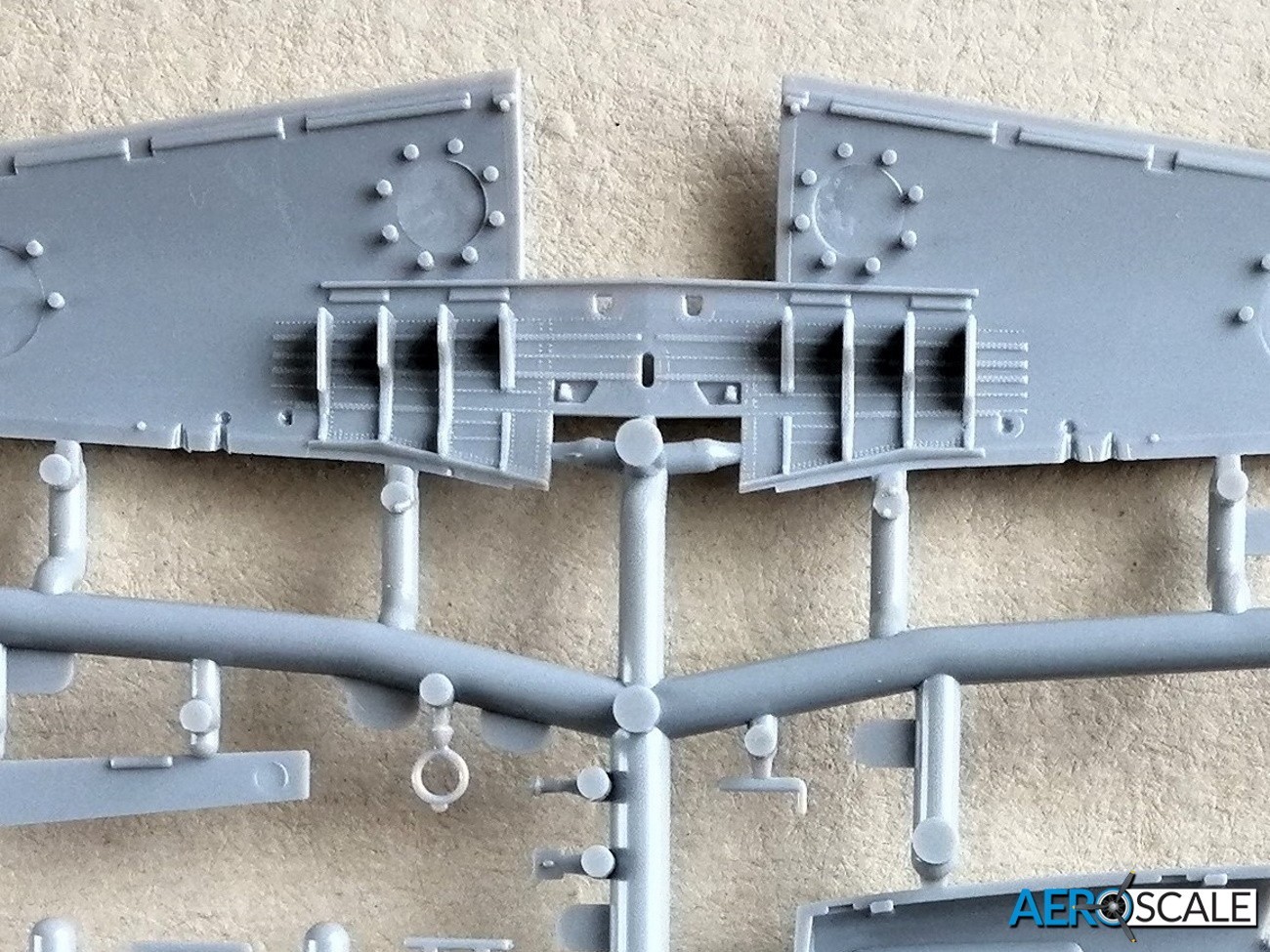 The wings are in two pieces with a one piece lower and unusually a one piece upper. A really nice touch is the slightly depressed panels on the underside of the wing where the rivet detail is. It’s very subtle [difficult to photograph] but it’s there. The flaps are separate and can be fitted in the dropped position. The detail in the undercarriage [U/C] bay is moulded into the top wing and it looks superb. Normally the cost of such detail are signs of shrinkage on the other side, but there is no sign of it. There is a detailed section of the wing spar to add to the U/C bay too. If you want to attach ordnance under the wing, then holes need to be drilled. There are guide holes to start you off. The non-filleted tail is attached to the one-piece horizontal tailplane. It’s great to see the canvas covered control surfaces represented accurately by ARMA Hobby. No sagging canvas between the ribs, just rib tape on show. 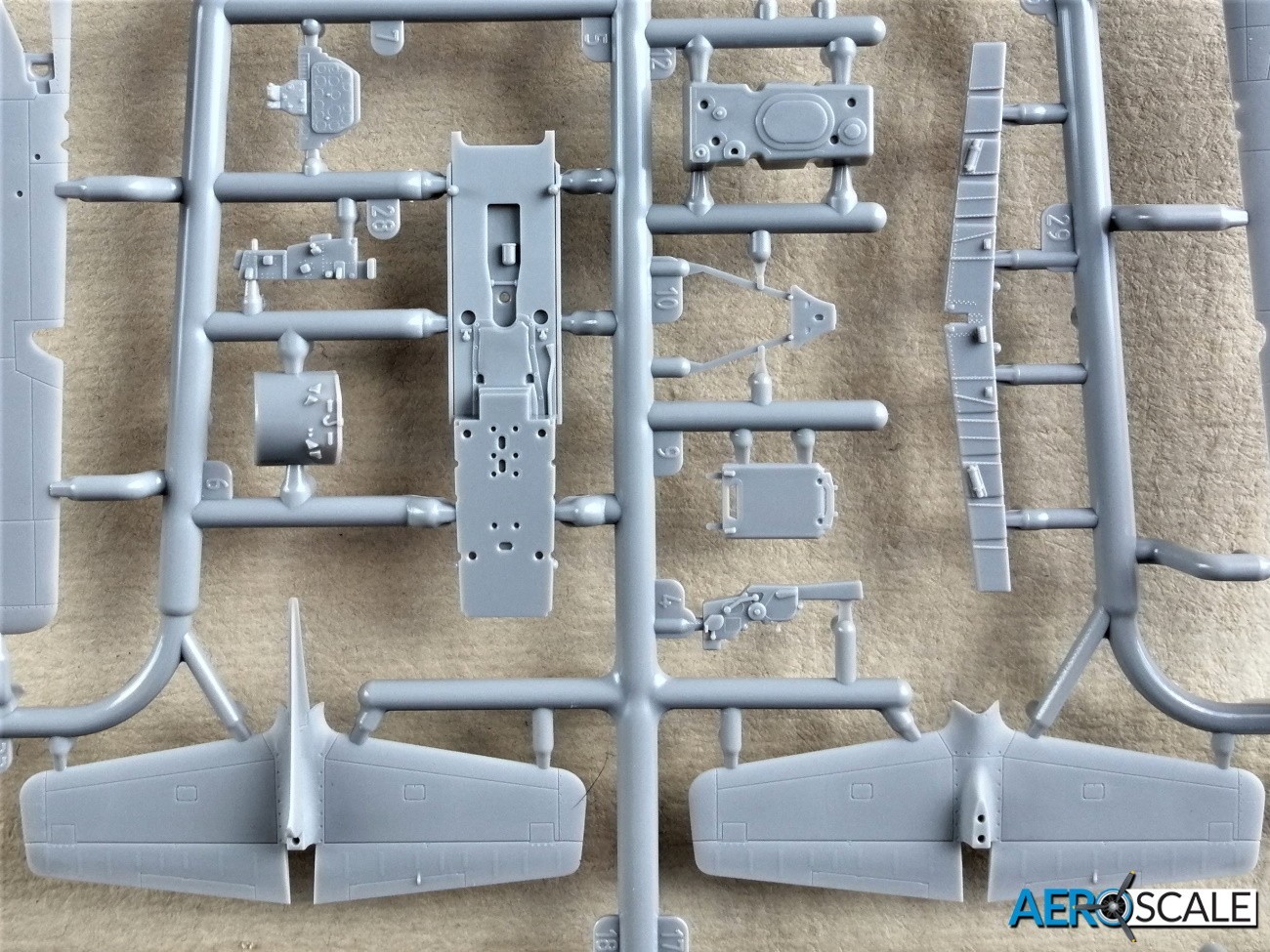 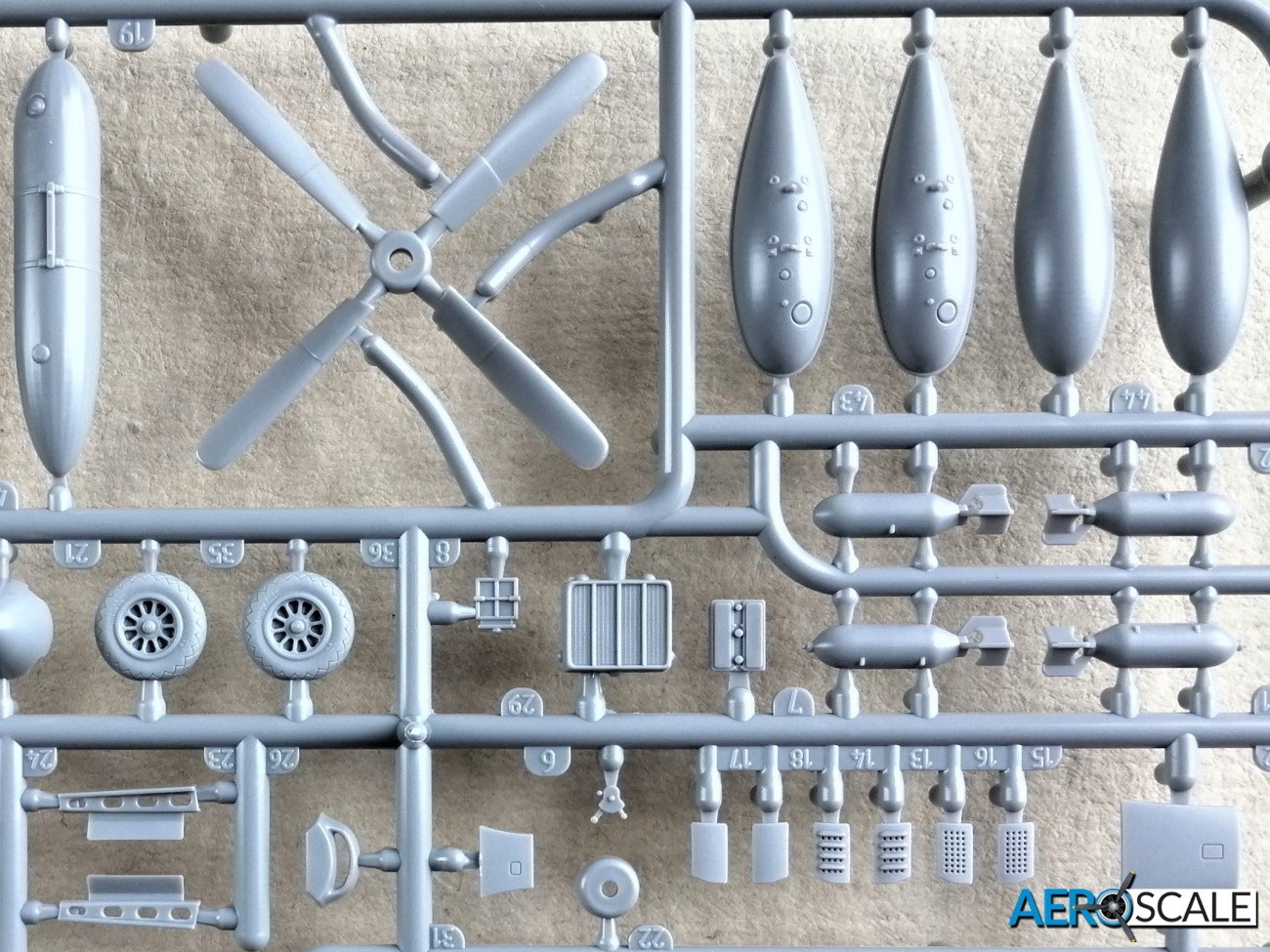 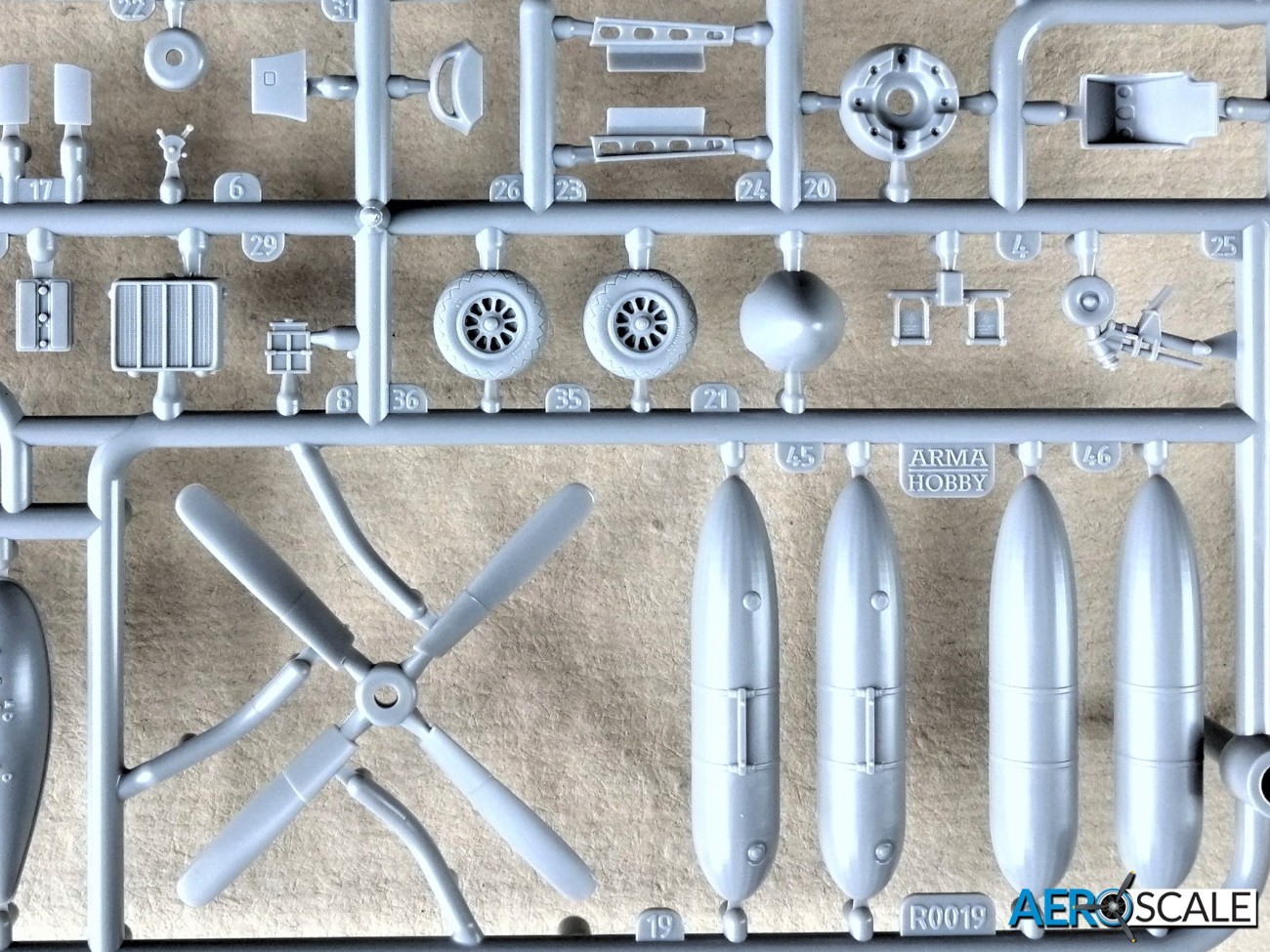 The main wheels are one piece with beautifully detailed hubs and diamond tread. The tyres are slightly weighted. The rear wheel unit is one piece and superbly moulded. Detail on the inner doors of the main undercarriage is really well executed, replicating the pressed aluminium very well. The only area I can see any shrinkage as a consequence of all the detail is on the outer gear door. There a hint of shrinkage on the exterior surface although this will be easy to put right with a sanding stick as there is no surface detail. 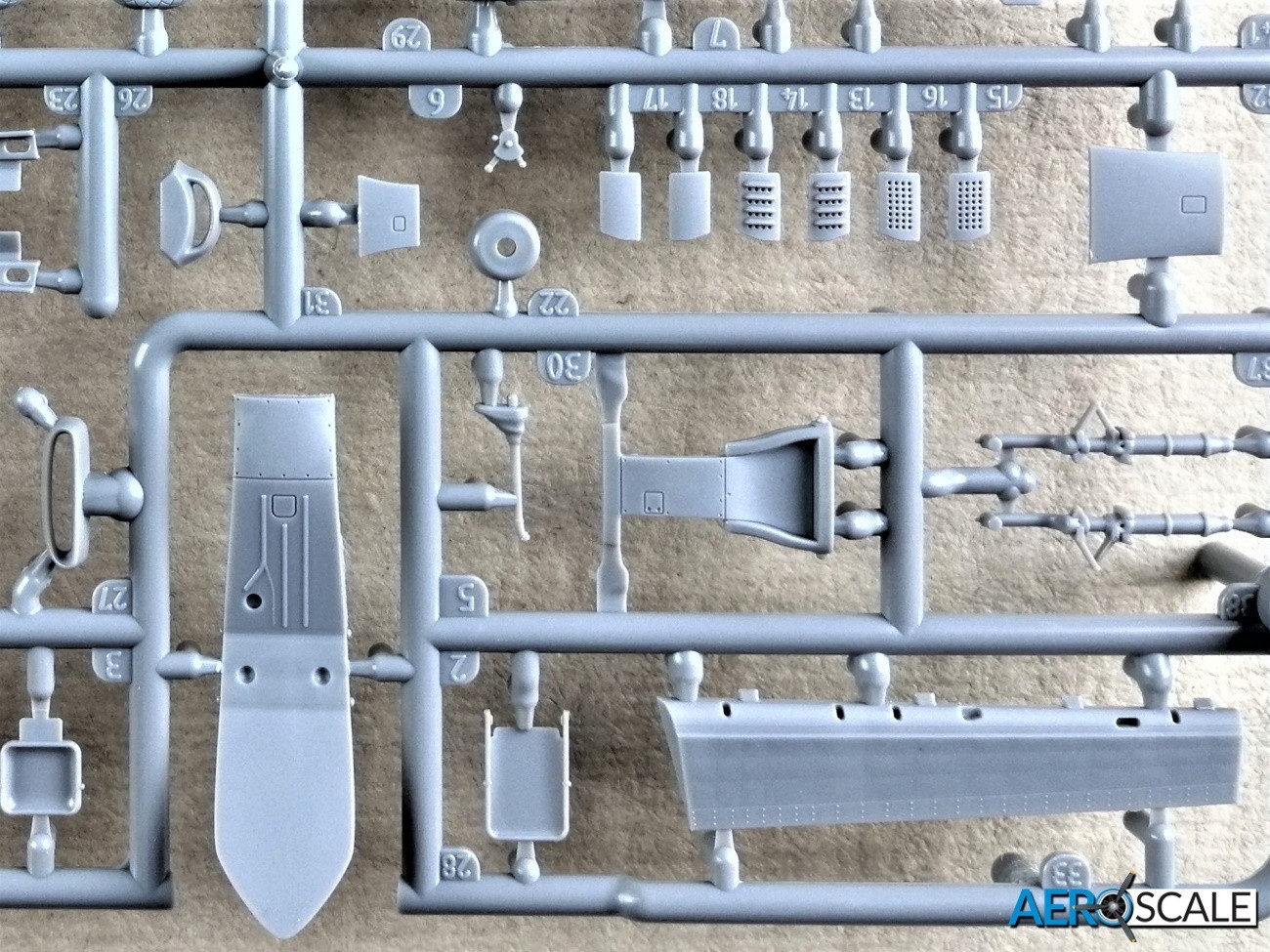 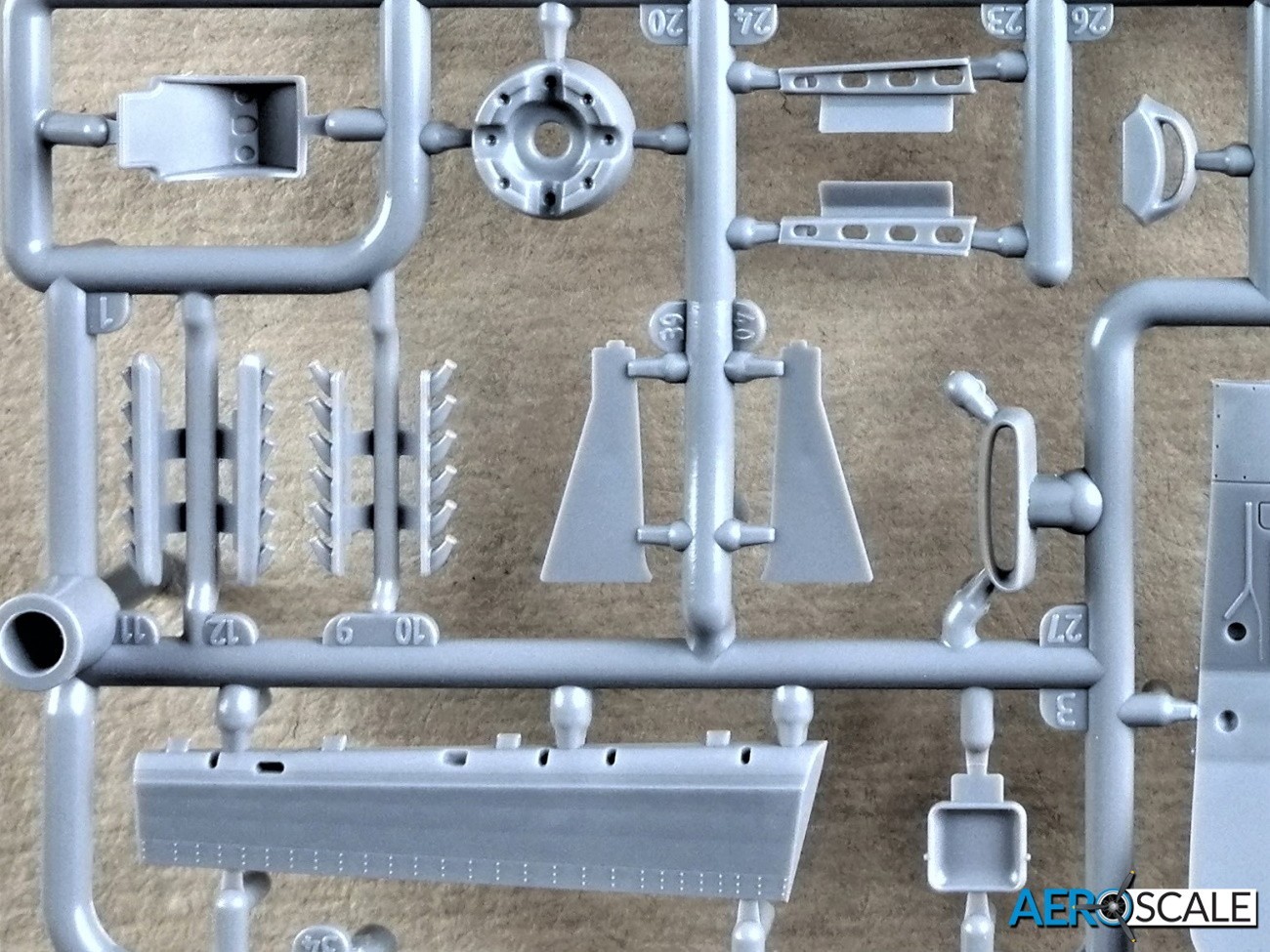 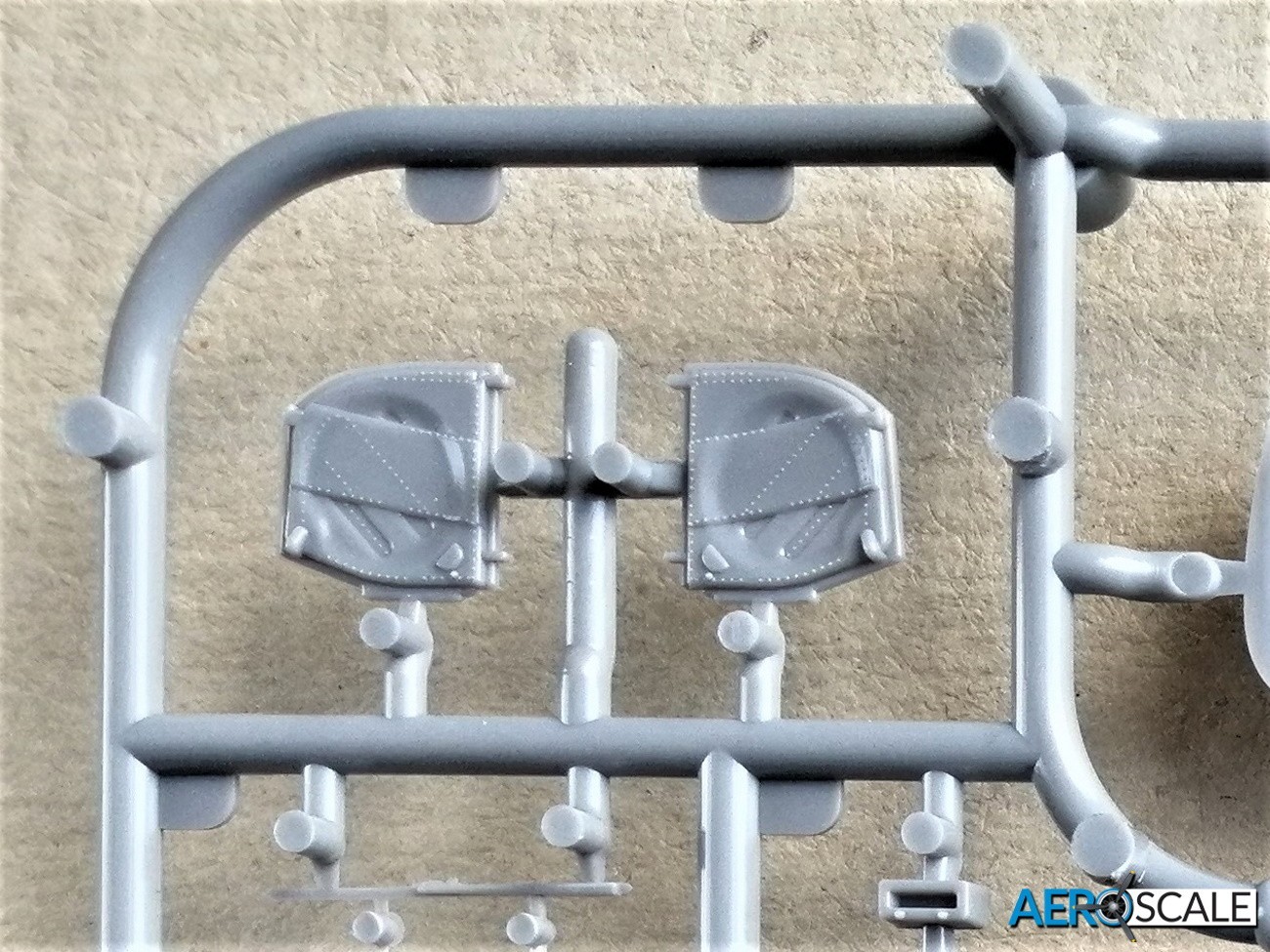 The kit includes the paper 108 gallon and aluminium 75-gallon fuel tanks. The ribbed construction of the paper tanks looks particularly good. Also included are two 250 lb bombs along with shackles. 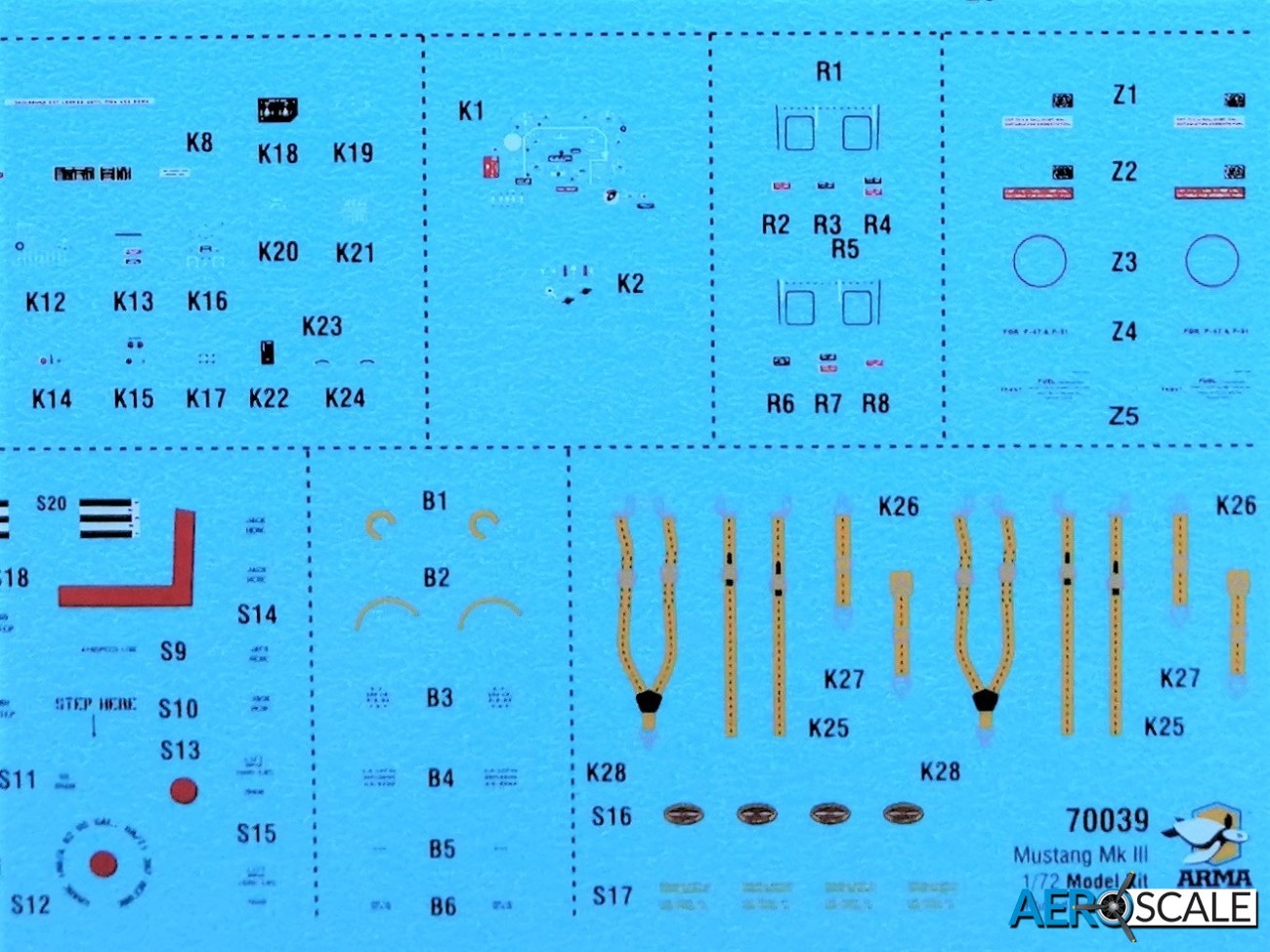 The decals printed by Techmod look superb: glossy, with good colour density and the definition is superb. The serial numbers of both aircraft are over painted with Squadron codes. These are printed as single decals making life a lot easier. 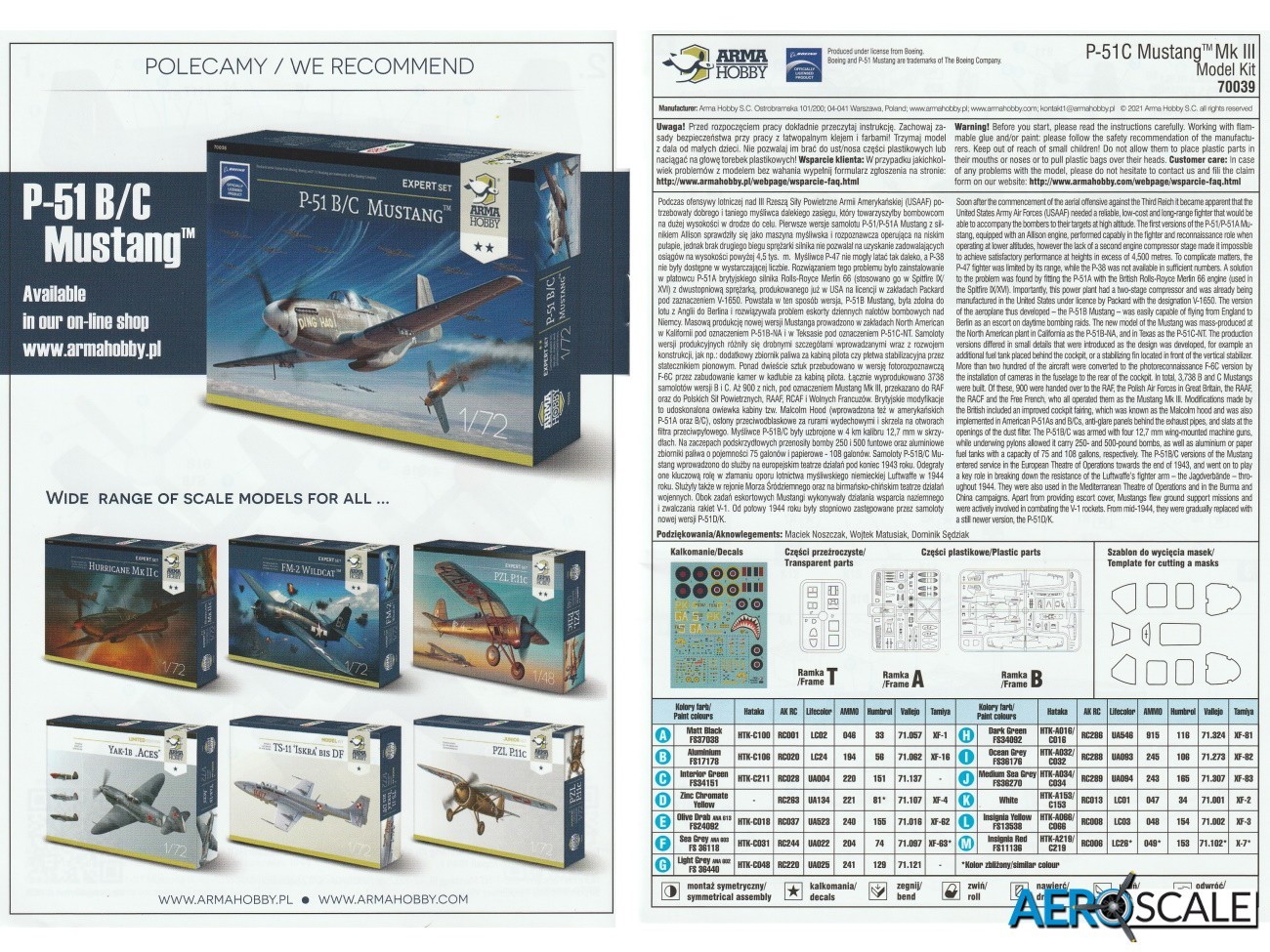 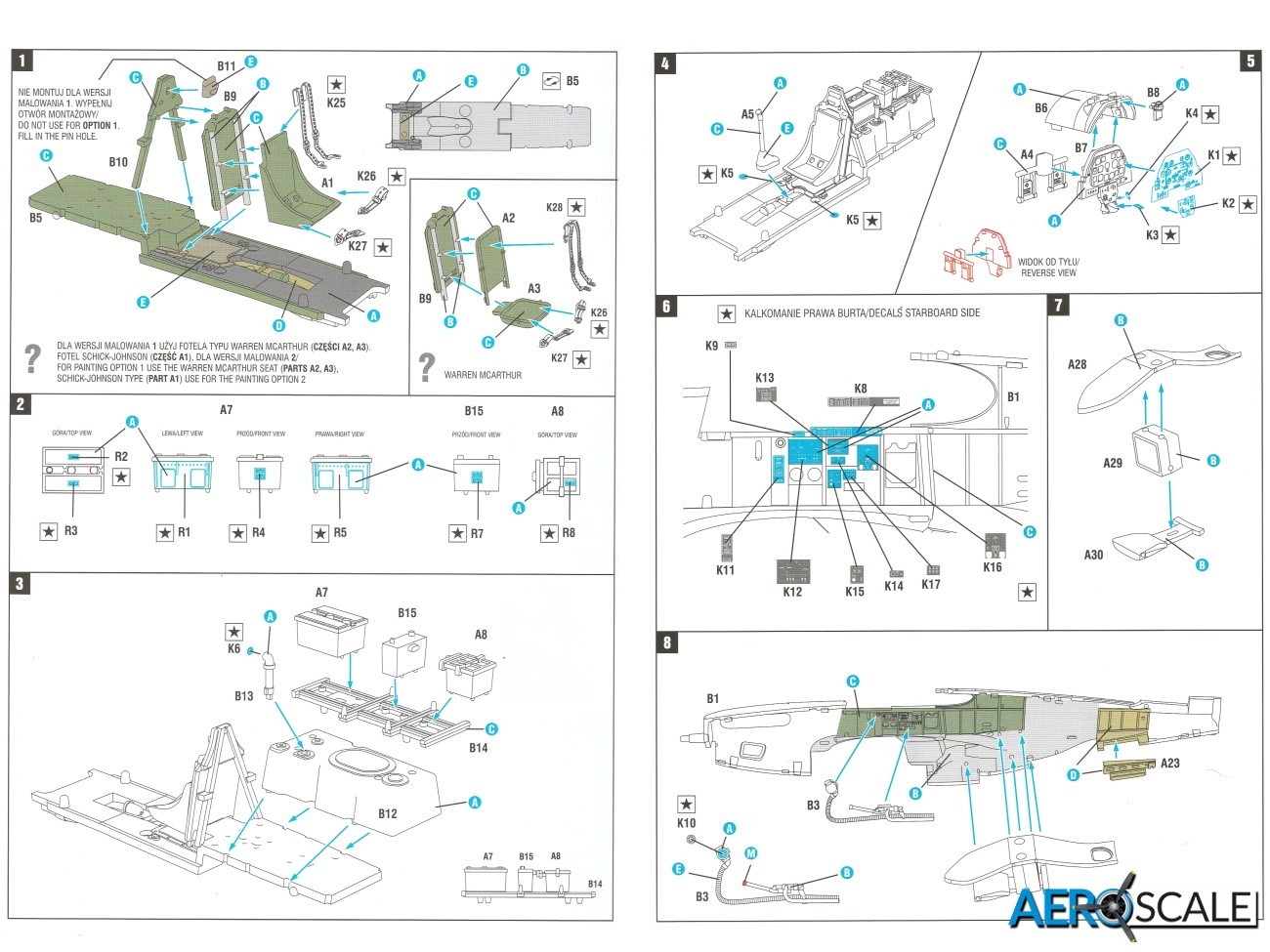 There are two marking options: 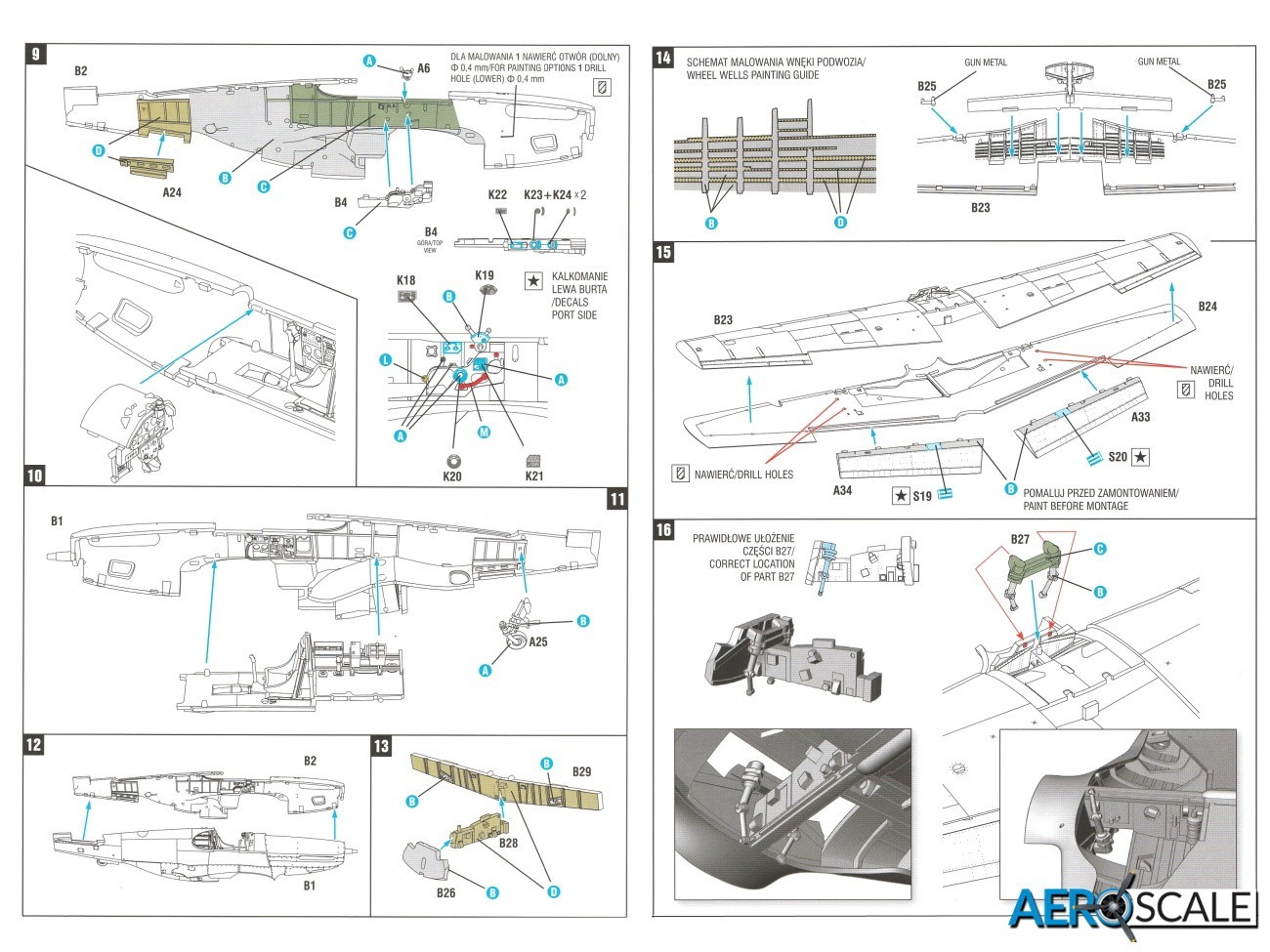 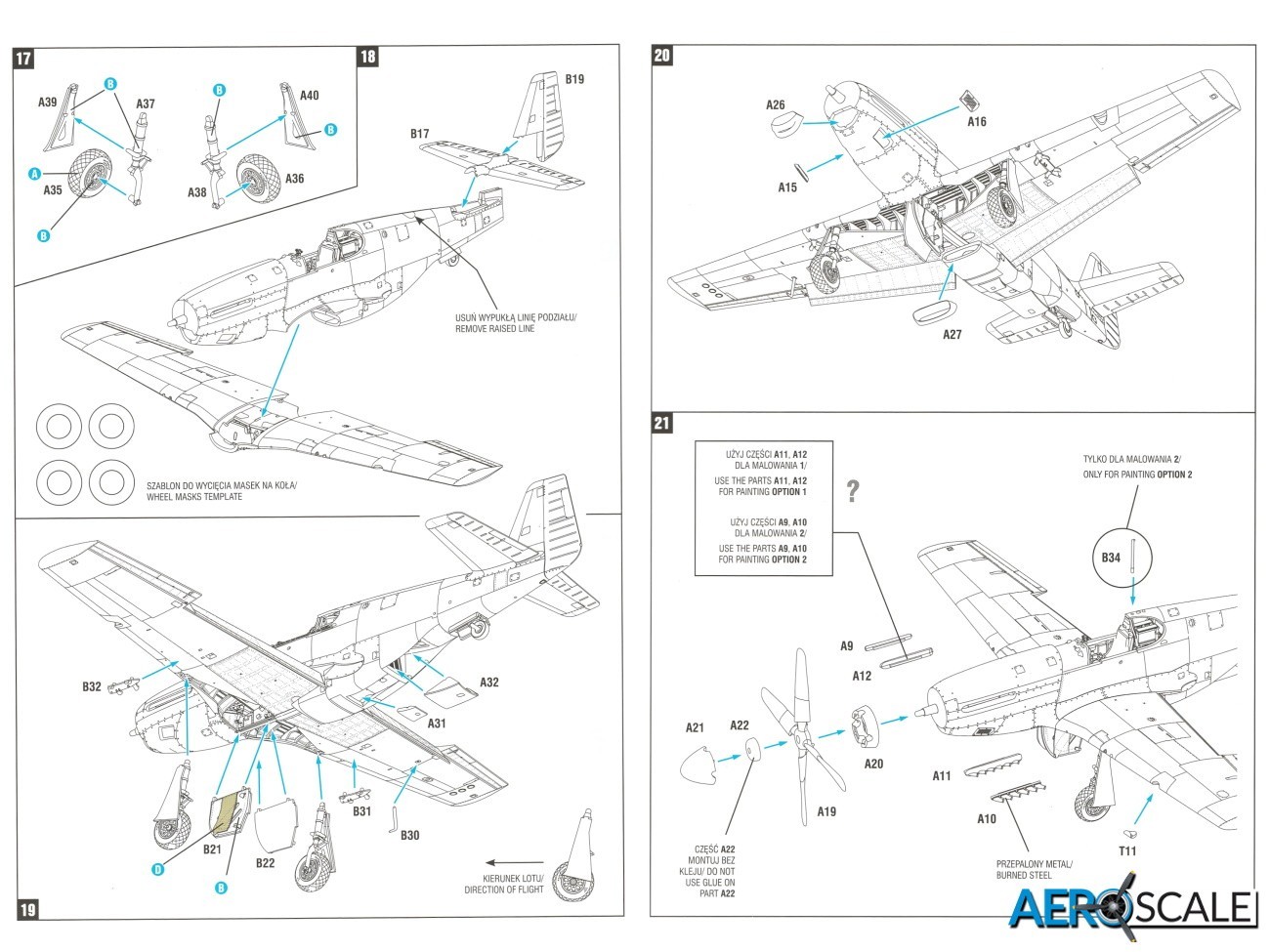 The instructions look pretty straightforward, just be aware of the various options for the aircraft you select markings wise. A nice touch are templates for creating masks for the canopy and windscreen printed on the front page of the instructions. There are also templates at stage 18 for making your own wheel masks. There is quite an extensive range of paint manufactures as reference for the colours. They include Hataka, AK RC, Lifecolor, Ammo, Humbrol, Vallejo and Tamiya. Also included are the FS numbers too. 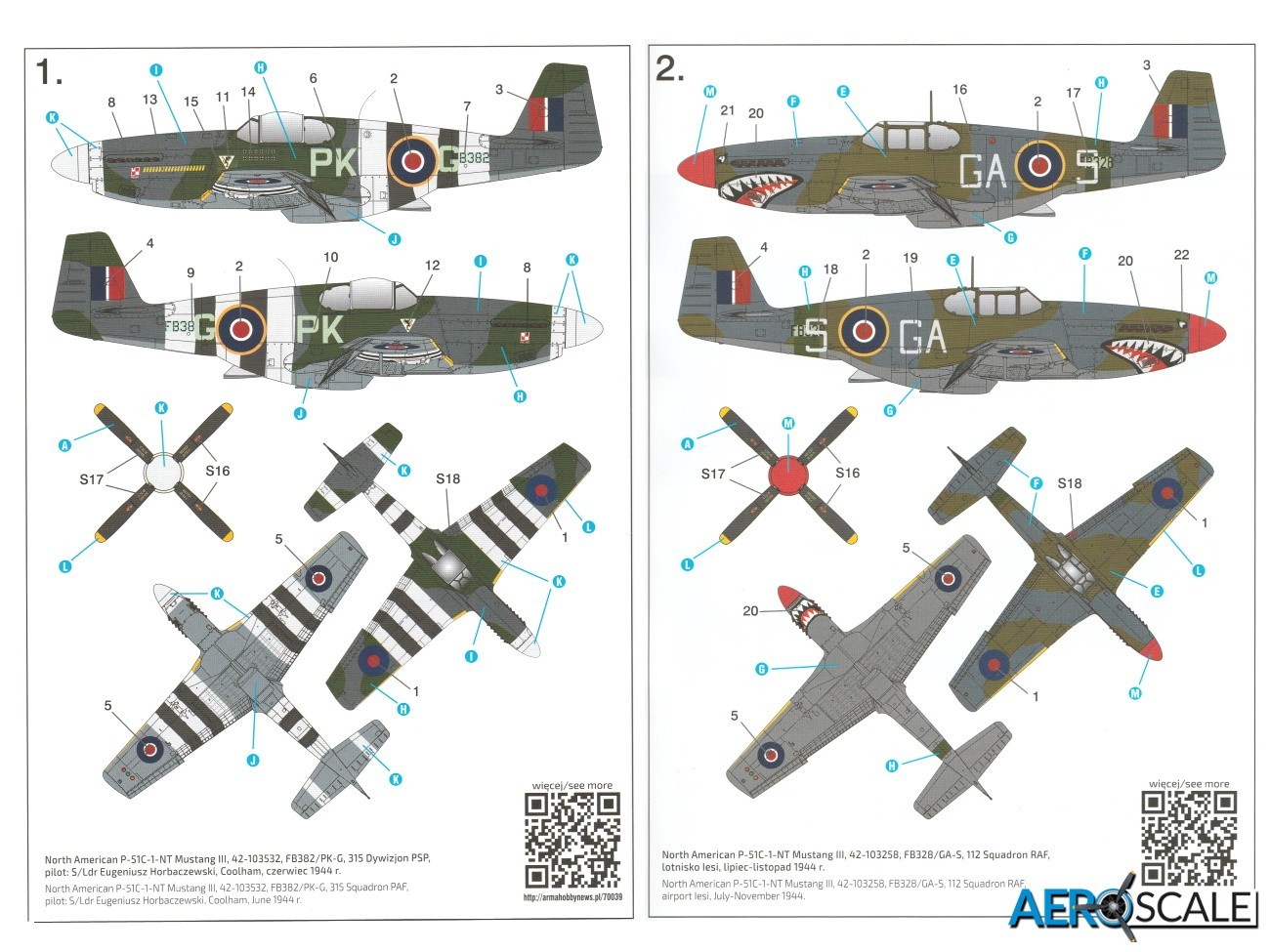 The amount of research and detail ARMA Hobby has done in producing this kit is evident. It’s on a par with the sort of detail that we have come to expect from Eduard, which is very high praise.  It seems to be a favourite for many 1:72 scale modellers as are evident from the numbers being built and displayed already.  Definetly up there as one of the best 1:72 scale Mustang Mk.III or P-51C. Highly recommended

Many thanks to ARMA Hobby for this review sample.