JPTRR
Editor
posted on 2 months ago — updated on 2 months ago
676
views
McDonnell XP-67 "Moonbat" is a new title in Osprey Publishing's series X-Planes. Using recently uncovered documentation and photographs, the story of this futuristic high-altitude, high-speed, long-range fighter is told. 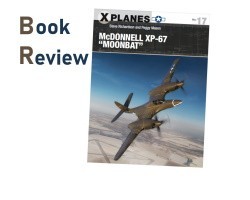 On the eve of the Second World War, the United States Army realized they were behind Europe in fighter aircraft performance.  Days after Nazi Germany invaded Poland the USAAC (United States Army Air Corps) issued Request for Data R40-A for engine proposals, and that led to Request for Data R40-C for aircraft.  Thus was the genesis of several ambitious and futuristic design proposals from several aircraft manufacturers.   One came from newly formed McDonnell Aircraft Company, the XP-67, designed as a "highly blended configuration."

This story is told in McDonnell XP-67 "Moonbat" from Osprey Publishing.  It is the 17th title in the series X-Planes.    Authored by Steve Richardson and Peggy Mason, and illustrated by artist Adam Tooby, this 80-page paperback is catalogued with Osprey's short code XPL-17 and with ISBN 9781472853004 for the softcover.  It is also available in PDF and Epub formats.  Due for release on November 24, you can view the book here on Osprey's website.

Cutting-edge engine technology paired with a bold conceptual airframe design promised a combat aircraft with undreamed of  performance.   The prototype P-67 was designed, built and tested, then refined, modified and retested.  Several times.  Until it was destroyed.  While this fascinating design spawned speculation and 'what-ifs' for decades, it's history has been nebulous until recently.  Osprey tells us:

The authors of this book have uncovered new sources of information and a wealth of photographs and line drawings that document not just the XP-67 but also its immediate precursors within the McDonnell Aircraft design community, as well as alternative configurations for unbuilt variants aimed at different missions. Packed with unpublished photos of all stages of construction including key airframe changes made after initial flight tests, showing in detail how the final configuration was evolved, this volume finally provides clear focus on a story that has long been shrouded in mystery.

Why was only a single prototype built?  Read on as we shine light on the XP-67 "Moonbat." 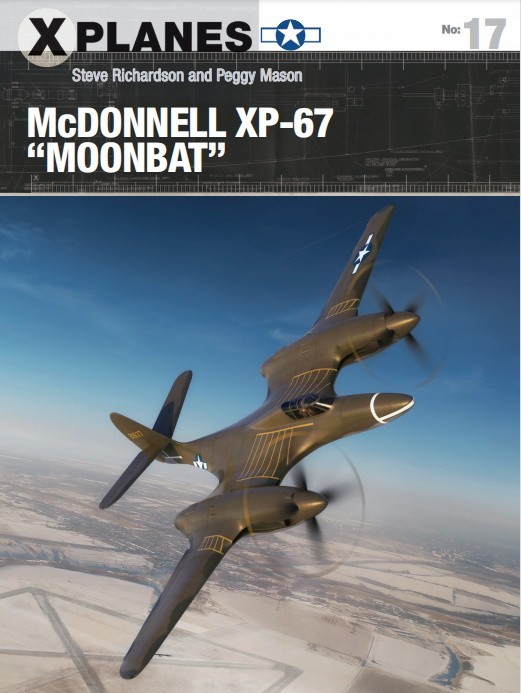 This book contains stories within stories, smidgens of anecdotes and trivia that are fascinating in regards to the aviation industry of the day.   McDonnell had been an employee of Glenn Martin and some of that company's culture followed McDonnell, along with McDonnell's notorious AVO: Avoid Verbal Orders.  It also brings up a security issue in that the aircraft companies of the day patented their designs, which allowed anyone to access what could be groundbreaking secrets.

The initial story of the XP-67 is a parallel story of developing advanced engine technology and the War Department's influence and their subsequent call for advanced fighter designs, i.e., R40-A, and R40-C, and the fledgling McDonnell Aircraft Company's first proprietary design.   This title chronicles those beginnings and the design, development, and testing of the XP-67 with impressive detail gleaned from primary sources.    I find the technical aspects of the book as absorbing as combat histories, which XP-67 never developed.  Origins traces and explains the Request for Data, different engine choices, production problems and shortages, origins of the blended airframe  theory, and numerous other influences.  Prototype Design delves into a variety of subjects, i.e., who actually came up with the blended design, propeller shaft designs, and other topics.  Technical data is freely included, i.e., drag increments, etc.  More trivia - McDonnell accidentally assigned the wrong X-designation and the confusion caused.   Primary sources include Inter-Office Memorandums, and Routing and Record Sheets among the official documentation.  These lead to tidbits such as an interpretation of the Handbook of Instructions for Airplane Designers  that led to the redesign of main landing gear retraction, with subsequent delays.  Amongst the myriads of revisions, design-and-proof or redesign examples is the decision to change XP-67's flight control mechanisms:

...No. 71 Sqn of the Royal Air Force had been asked to comment on the Brewster Buffalo fighters it had been issued with. Sqn Ldr Walter Churchill, had this to say about pushrodactivated flight controls, “While this is a positive method of operation it is feared that an explosive shell or even a bullet . . . may shatter or collapse it. Experience has proved how much punishment the twin cable can stand without breaking down.” When this report was forwarded to the US Navy’s Bureau of Aeronautics, it contained this further comment from an Ens George Gibson (USNR), “There are bullets in this war, and the more area occupied by any part, the greater is the possibility that it will be hit.”

As a rebuttal the authors offer;

One of the authors of this book spent several decades working in the field of combat aircraft opportunity, and would like to point out that both pushrods and cables are very lightly loaded, so both approaches can be equally survivable against most threats. It should also be noted that the P-47 Thunderbolt, universally regarded as a very “tough” and survivable aircraft, employed pushrods and bellcranks in its flight controls rather than cables.

That is an example of the technical and historical expertise supporting this book.

Test and Development begins with wind-tunnel testing and quickly leads into the amazing although frustrating world of flight testing.  The text is backed with test pilot reports and other project correspondence.  Those are fascinating because different pilots completely contradicted assessments by other pilots.   One example is:

“The take-off run is unusually long and gives the pilot the sensation that the airplane is under powered .

Initial climb is poor and immediately after take-off forward vision is considerably restricted.

After take-off the acceleration to minimum safe single engine speed is slow.

The rate of climb is low at all altitudes for fighter type airplanes.

At 22,000 ft. the airplane begins to feel mushy and response to controls is slow.

Cooling during all climbs was good.

All controls are effective from high speeds to the stall except the elevators may be blanketed out at high angles of attack near stalling speeds.

The rudder becomes somewhat ineffective at slow speed with the gear and flaps extended but aileron control is good throughout the stall.

Sub-chapter XP-67 Variants provides a look at other schemes for the "Moonbat."  Finally, lessons learned from the successes or failures of the XP-67 are explored in Influence on Frontline Types, and Conclusion.  We are seeing some of the fruits of McDonnell's vision in aircraft designs of today.

Visual support for the text is exciting.  Aside from photos of the flyable prototype, there are dozens of before-and-after images of airframe modifications, internal structures, and other views not usually covered in aircraft history books.  These can be of interest to modelers practicing "gizmology" or representing internal components without definite sources.   Numerous reproductions of primary source material are also used.

Illustrations by artist Adam Tooby brings color to an otherwise black-and-white image gallery.  Some illustrations are of the actual prototype.  Other artwork depicts "what-if" P-67s in action against the Axis, and several profiles:

Several data tables bring us technical characteristics of the "Moonbat."  Some are expansive.

Dimensions of four iterations up through 1943:

Dimensions of three iterations of the prototype and two speculative variants: 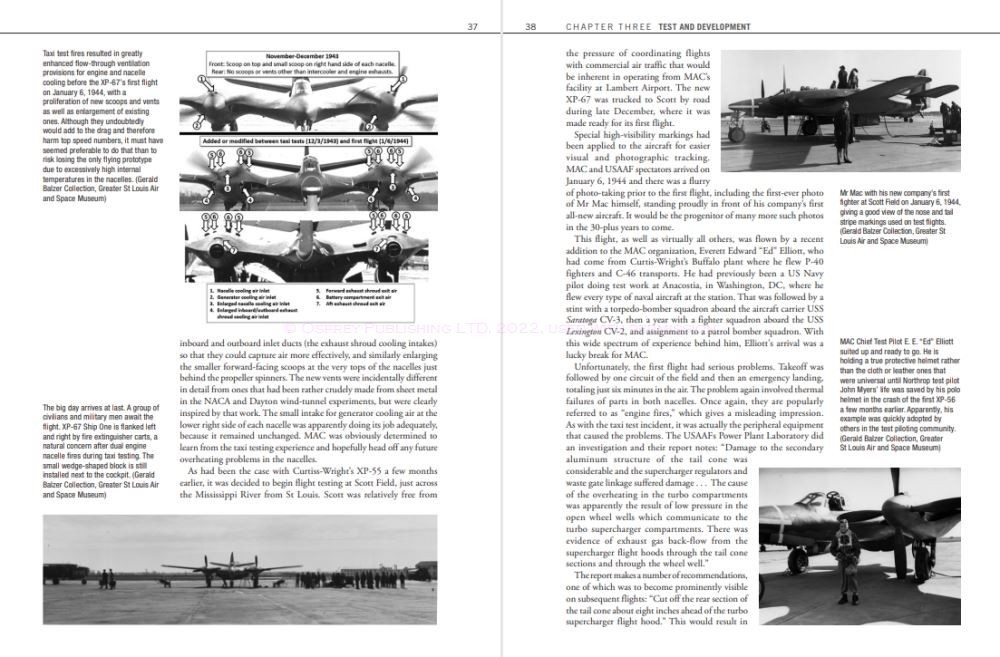 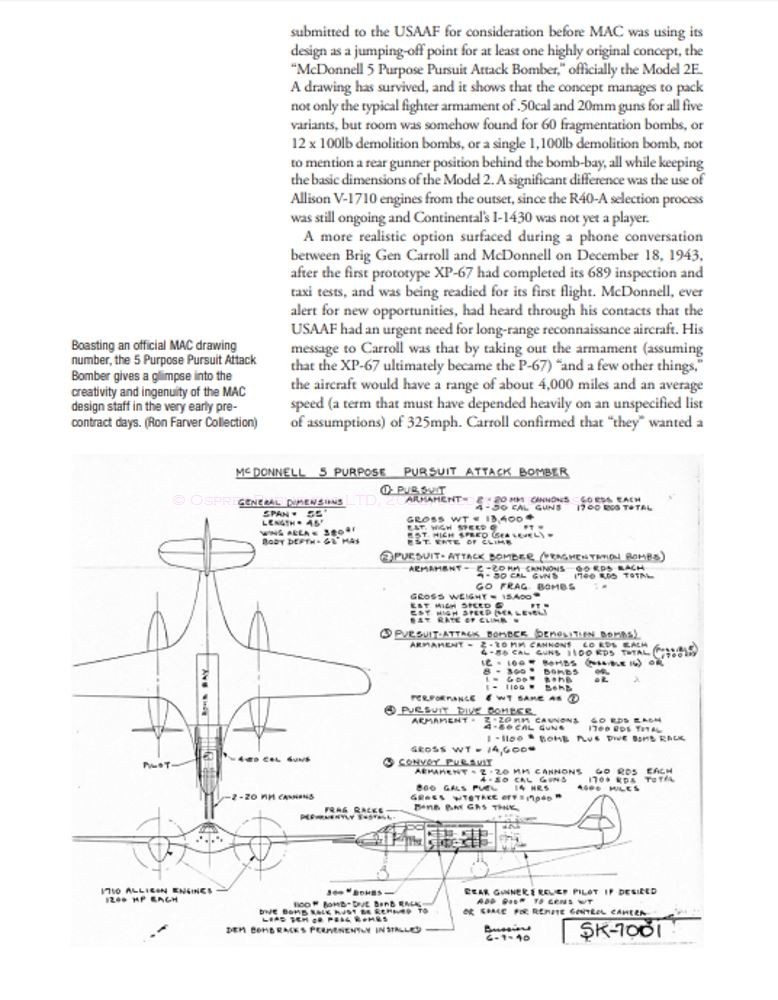 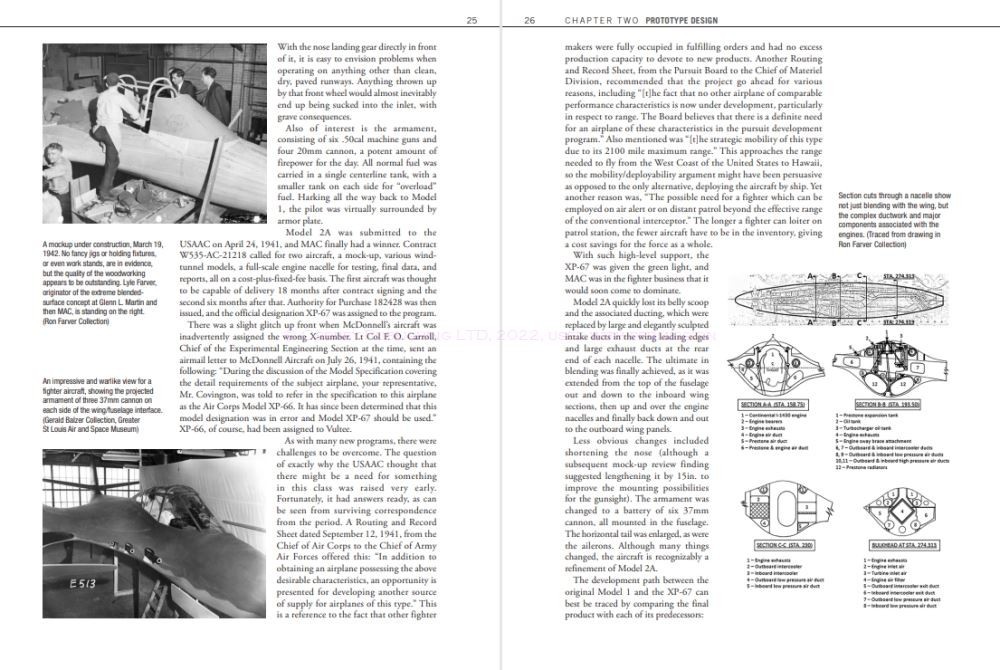 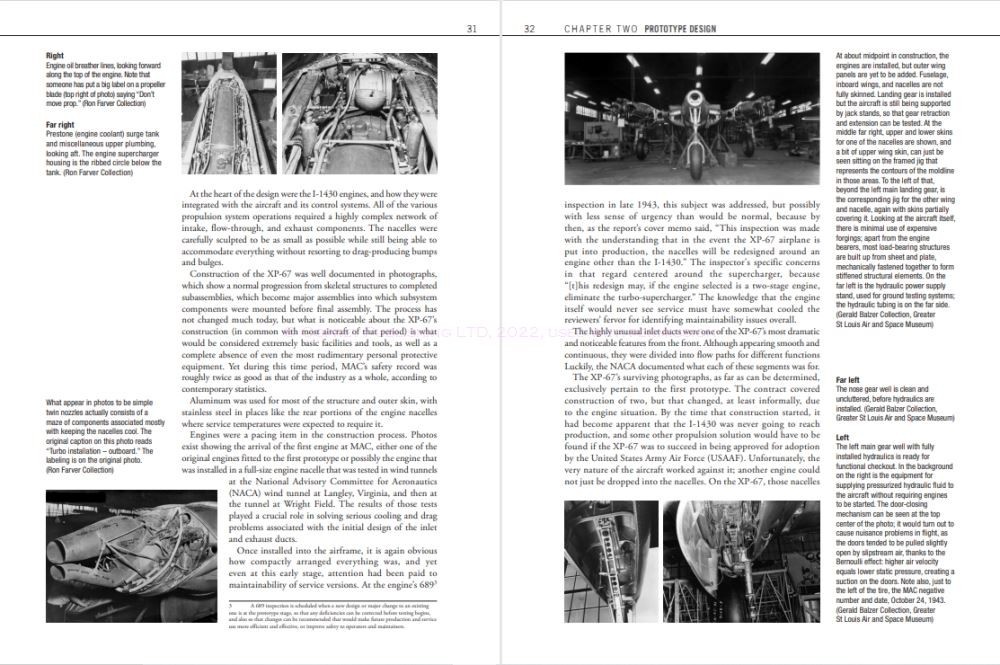 McDonnell's XP-67 is a fascinatingly designed aircraft that influenced subsequent McDonnell jets, and possibly the F-14, F-16, F-18, and B-1 and B-2.   Osprey's book McDonnell XP-67 "Moonbat" is an amazing book that sheds light on the process of designing and testing of  unconventional aircraft designs.  The reproduction of primary documents as source material is unique and unimpeachable for authenticity.  Artwork is first-rate and the speculative 'in-action' scenes are interesting.

Overall I enjoyed this latest title of the X-Planes series and I look forward to the next one.  Recommended.

Please remember to mention to Osprey and retailers that you saw this book here - on AEROSCALE.