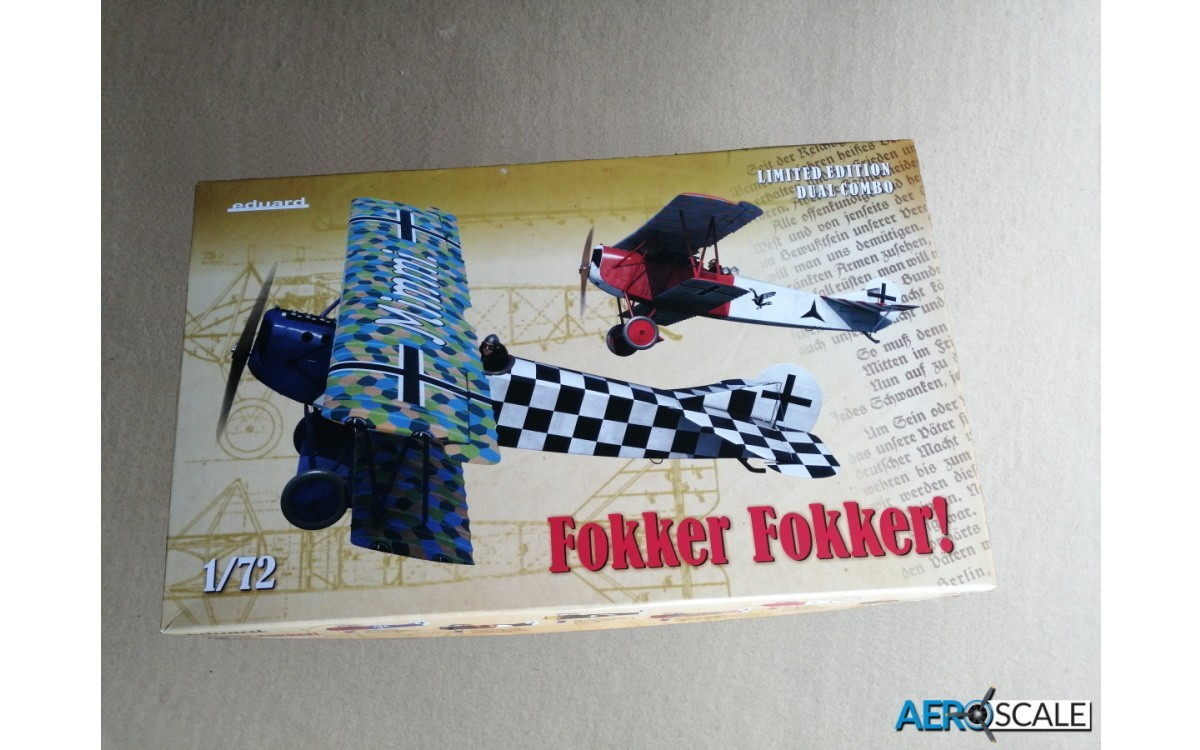 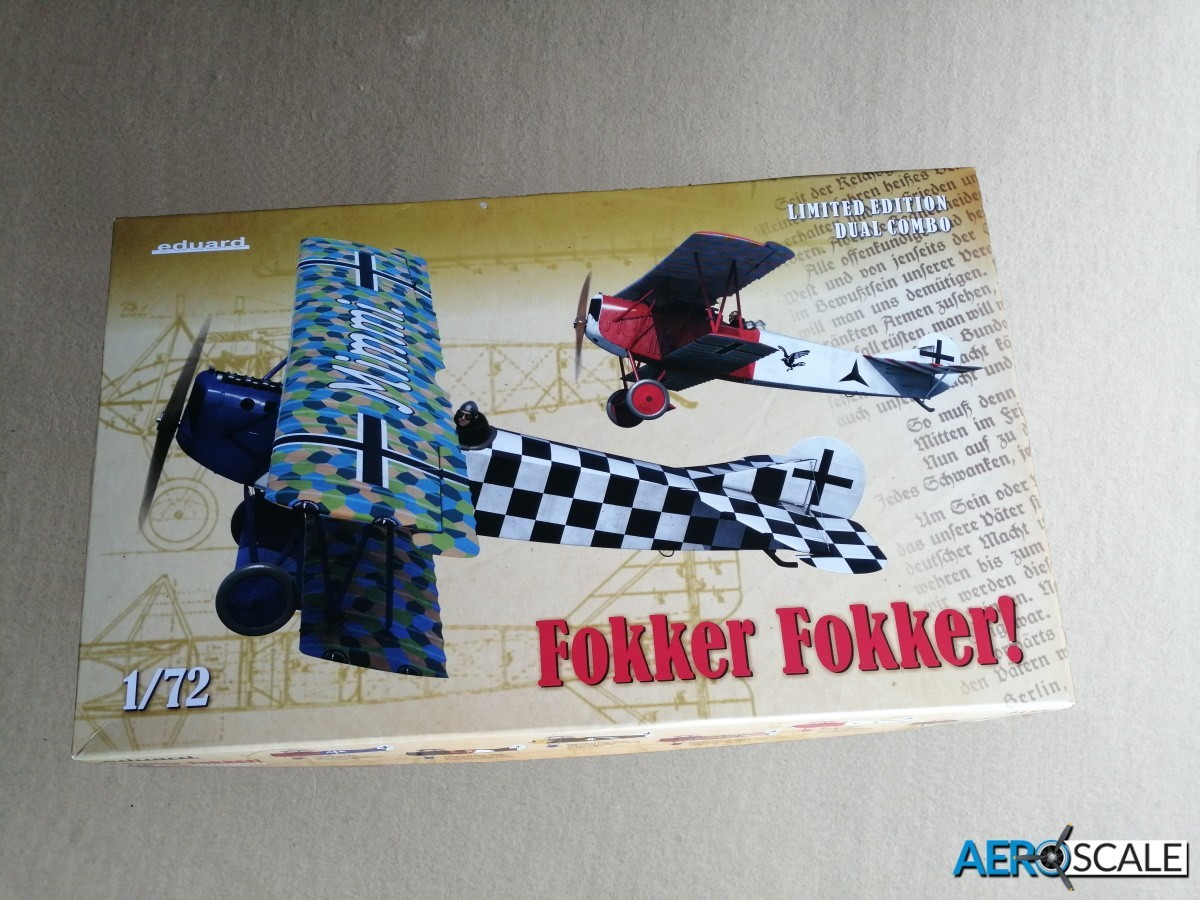 Inspectorate of the Germany Flying Forces (Idflieg) decided to invite a number of aircraft manufactures for a competition to decide the next choice of fighter aircraft. Fokker entered a few aircraft, but it was the two cantilevered prototypes V.11 and V.18 that garnered widespread approval from the pilots. Unsurprisingly the Fokker was deemed superior to the aircraft entered by Albatross and Fokker received an initial order for 300 D.VIIs, followed by four more contracts amounting to 1.000 aircraft. Production capacity was not deemed sufficient at Fokker to fulfil the demand, so ironically Albatross and its subsidiary O.A.W. were ordered to take up the slack.

The strength, handling, speed and durability of the new Fokker immediately impressed front line pilots. In late June 1918, the first batch of BMW IIIa powered Fokker VIIF reached the front. The engine was a significant improvement in performance over the Mercedes D.III. The D.VIIs were beginning to rule the air on the western front and the Armistice came just in time for front line Allied pilots.

Many D.VIIs survived the war,and served with many air forces well into the 1930’s. It became a star in many action movies inspiring many future pilots. 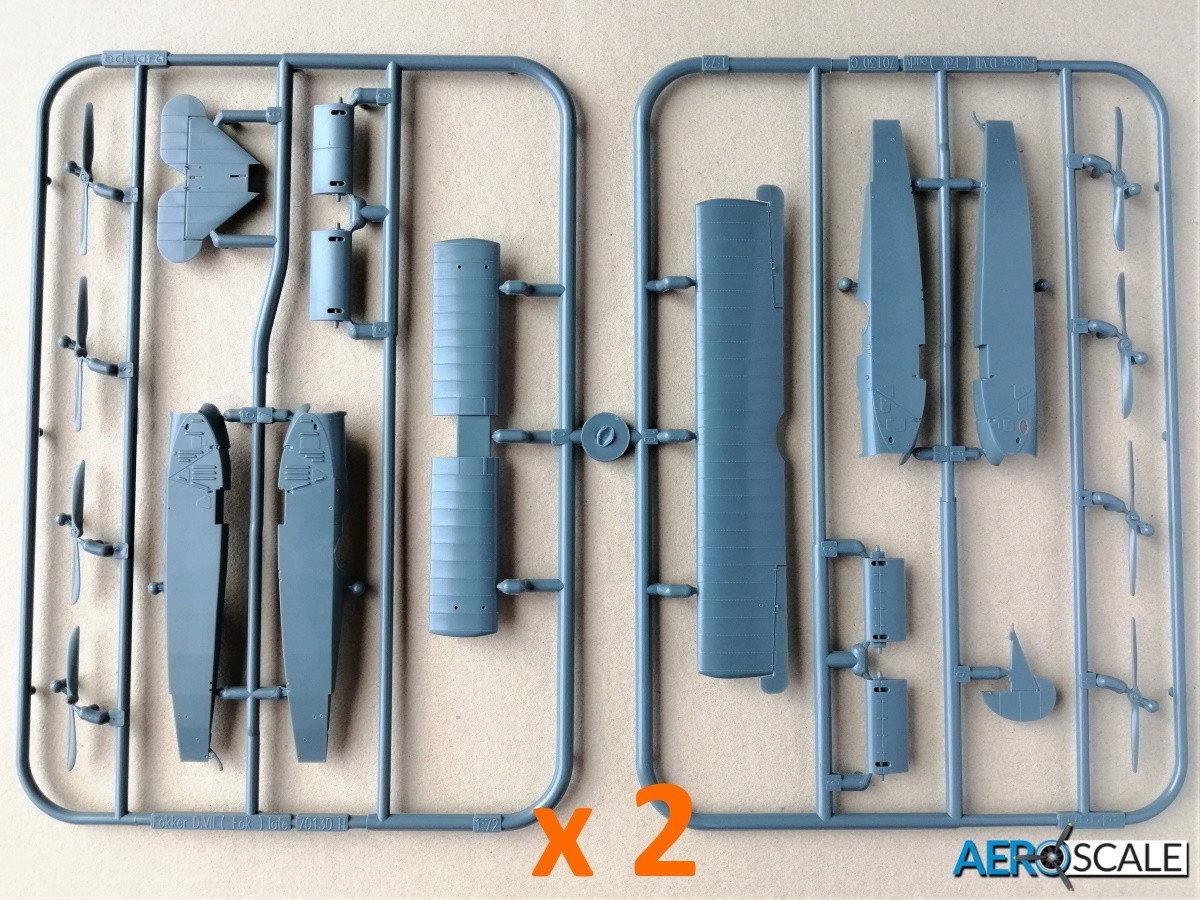 Inside the box of this limited edition duo combo you will find:

The amount of decal sheets is interesting and the inclusion of the polygon printed pattern on the aircraft skin is very welcome. This Limited-Edition kit includes resin BMW IIIa and Mercedes D.III engines 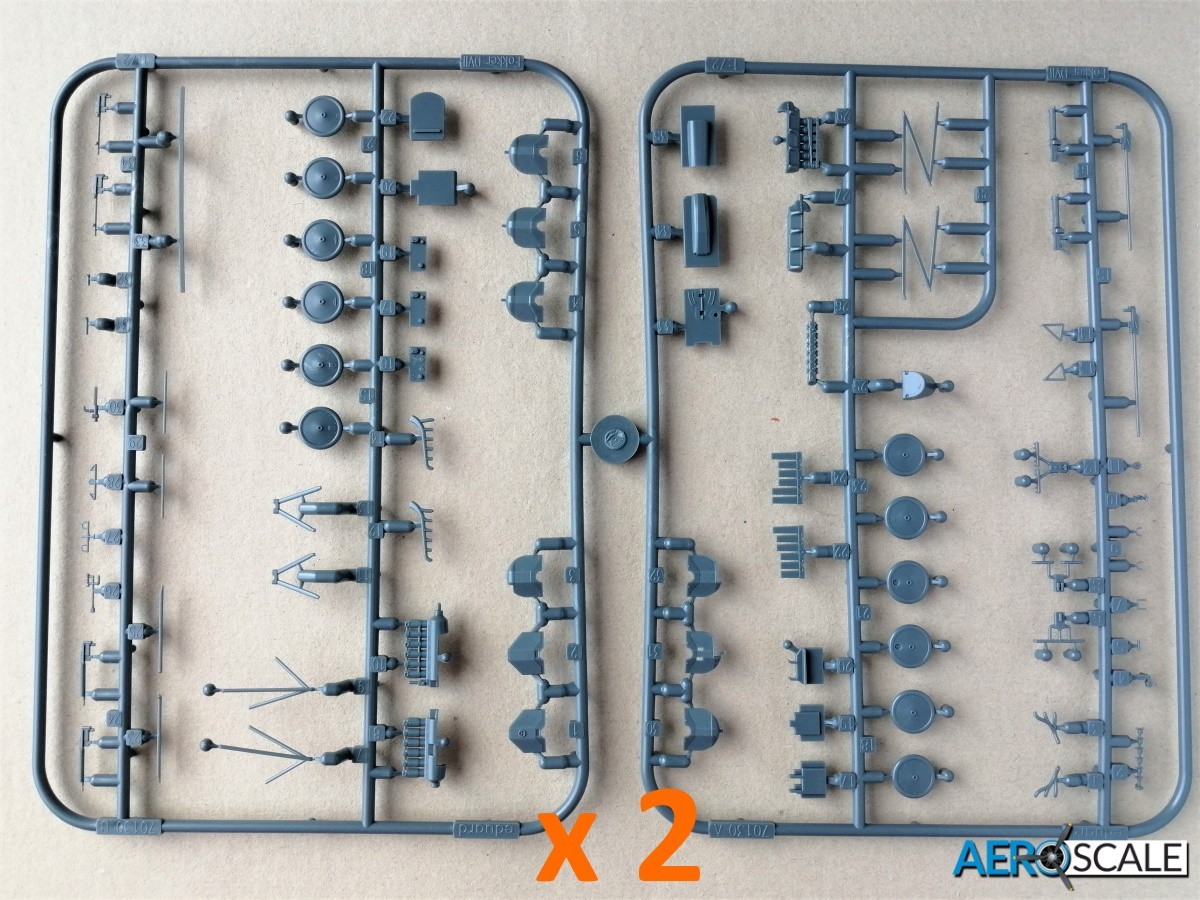 The cockpits are built up from a mix of plastic and photo etched parts as well as decals. A thoughtful touch from Eduard is the inclusion of two small decals with the polygon pattern printed on them for the inside walls of the cockpit. For authenticity you might want to tone down the colour somewhat as the printing was applied on one side of the canvas. The canvas surface on inside of the cockpit would have more muted colours. There are around eleven plastic parts and nine pre coloured photo etched [PCPE] parts that make up the cockpit area. There are decals for some of the instruments if you don’t want to use the PCPE parts. There are few bits of furniture that need to be removed from the plastic instrument panel to fit the PCPE/decal parts.The PCPE instrument panel looks like varnished plywood with the instrument already mounted on it. There is no decal substitute for the instrument panel.The primer pump requires you to find a 0.5mm dia length of plastic rod. The handle is supplied as a photo etched part. There is a primer moulded onto the right-hand wall of the cockpit which needs removing as this will be covered by the decal. The seat has some cushioning detail including leather tension buttons and there are PCPE set harness included. The instructions provide plenty of colour references for the inside of the cockpit and you will have to recreate the look of plywood on the floor. 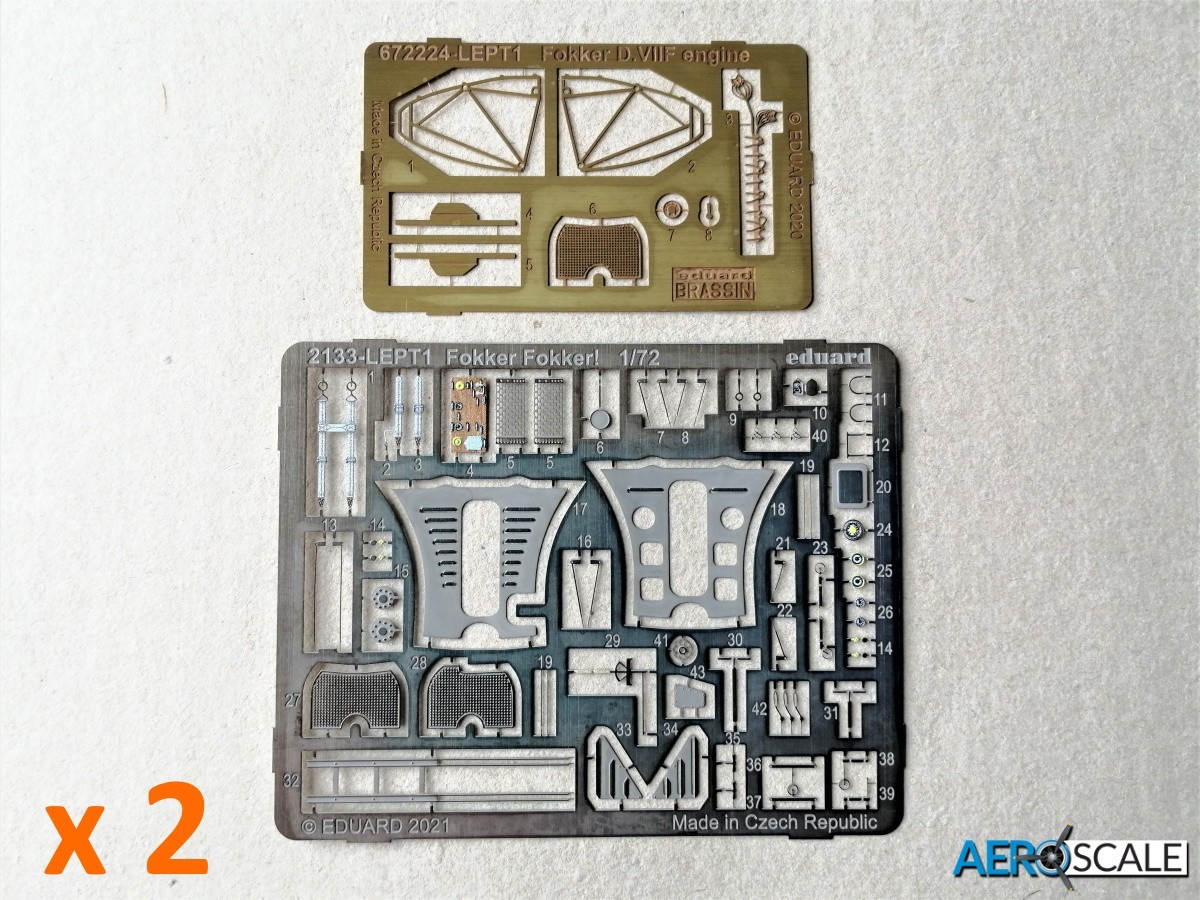 The pair of included MG 08/15 or ‘nullachtfünfzehn’  can be fitted with a photo etched [PE] perforated cooling sleeves. This will require you to lightly roll the PE sheet into a tube to fit around the gun barrel. It takes a bit of care to do it, but improves the look of the gun no end. If you can’t bare the thought of doing this there is a plastic sleeved version included. The cartridge ejection chutes are separate parts. 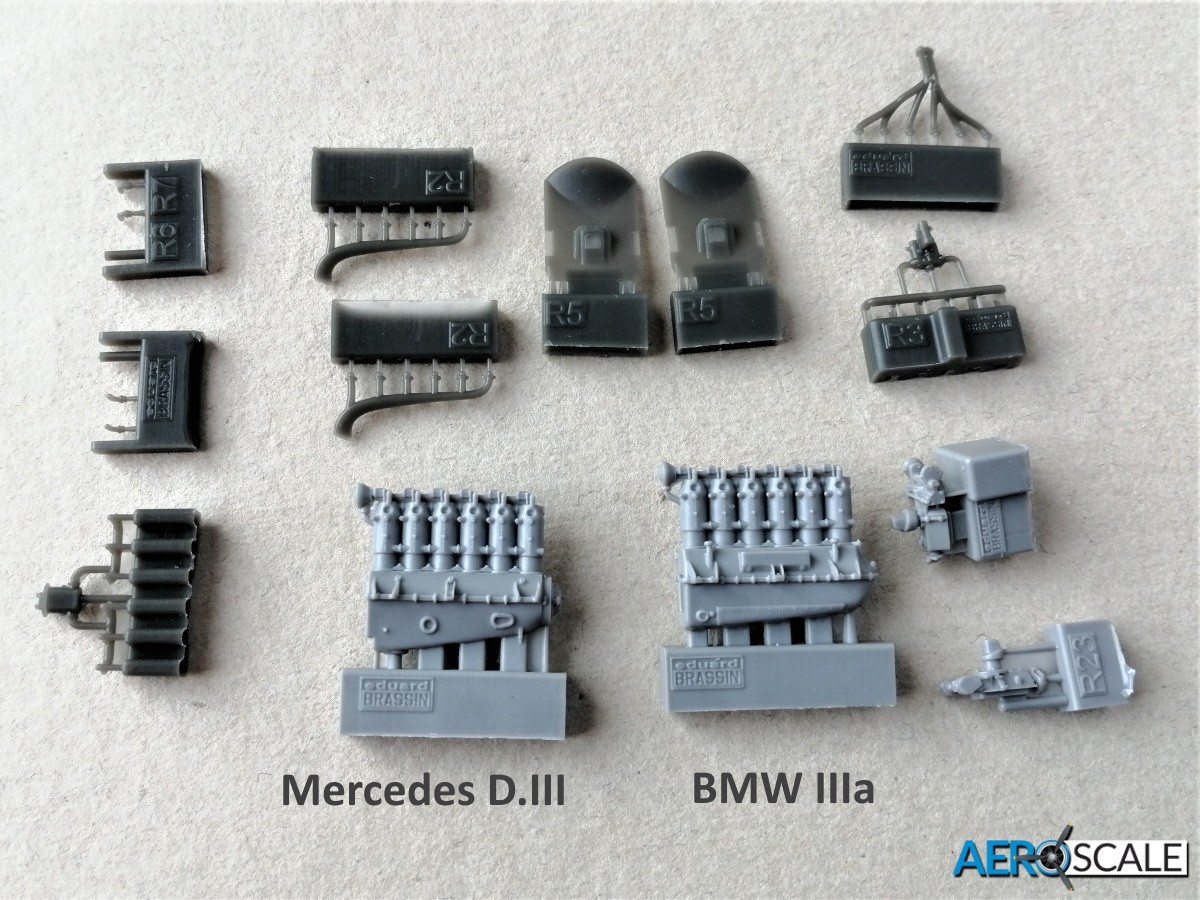 There are plastic versions of the two power units, but you didn’t buy this edition for those. The detail of the two resin engines look superb and there are some PE parts to add. The Mercedes D.III has eight resin parts and the BMW IIIa has seven.  There are photo etched parts to further detail the area around the engine bay. While we are in this area you become aware of the differences in look of the Fokker over time. There are two nose variations and this is accomplished by removing and adding parts as well as the filling in of one of the ports. The plastic radiators are exquisitely detailed, but there are even better looking PE replacements. There are a couple of PE panels for the area around the engine. The detail is superb and they need to be formed into shape. Surgery is required to remove the plastic parts the PE items replace, but this will be well worth the effort for the extra detail. With this release there is a choice of three propellers depending on which marking option you go for. There is a PE hub plate for the spinner. 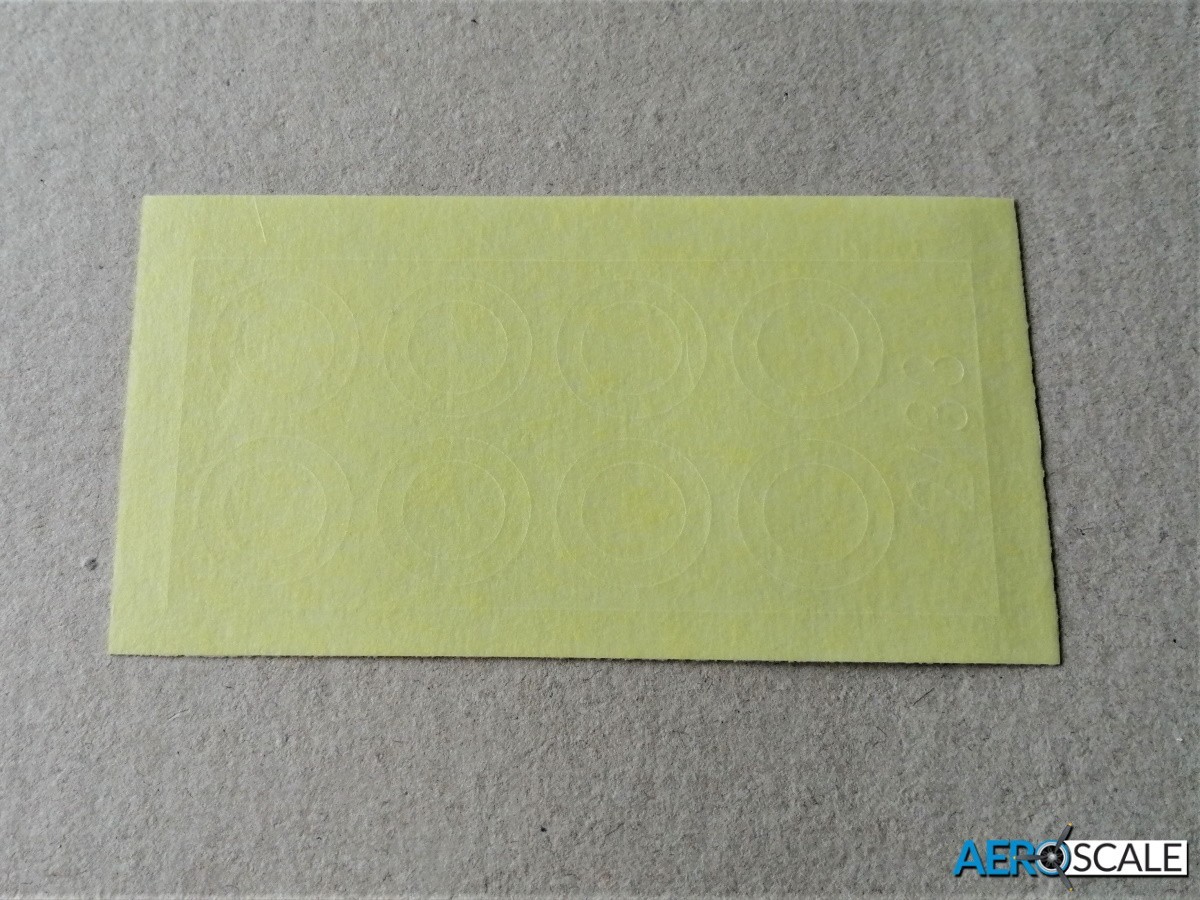 There is no hint of frames or the usual sagging stretched canvas to be seen on the fuselage halves. Eduard has correctly represented the doped canvas as being tight as a drum. The tail skid is moulded with the right-hand fuselage. There is a length of plastic included with stitching moulded on it which neatly fits over the lower fuselage join. The tail and rudder are a separate one-piece items featuring raised tape lines. The rudder has PE actuator including the cable. It’s good to see the amount of work that has gone into the smaller details. One example is the holes where the control cables emerge from the fuselage. They are not just holes; the holes have neat looking surrounds presumably representing the reinforcement so the cables would not rub the fabric. There are a few control cables to add 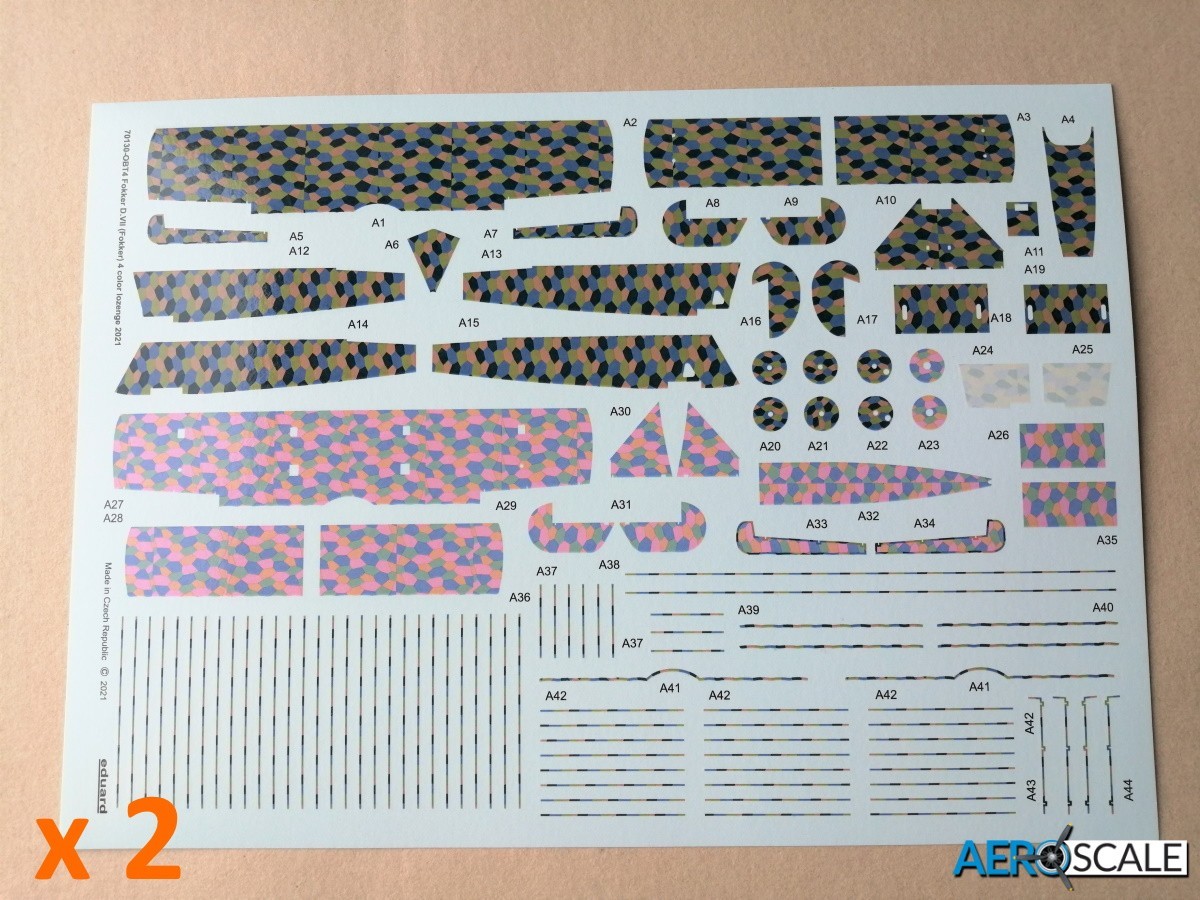 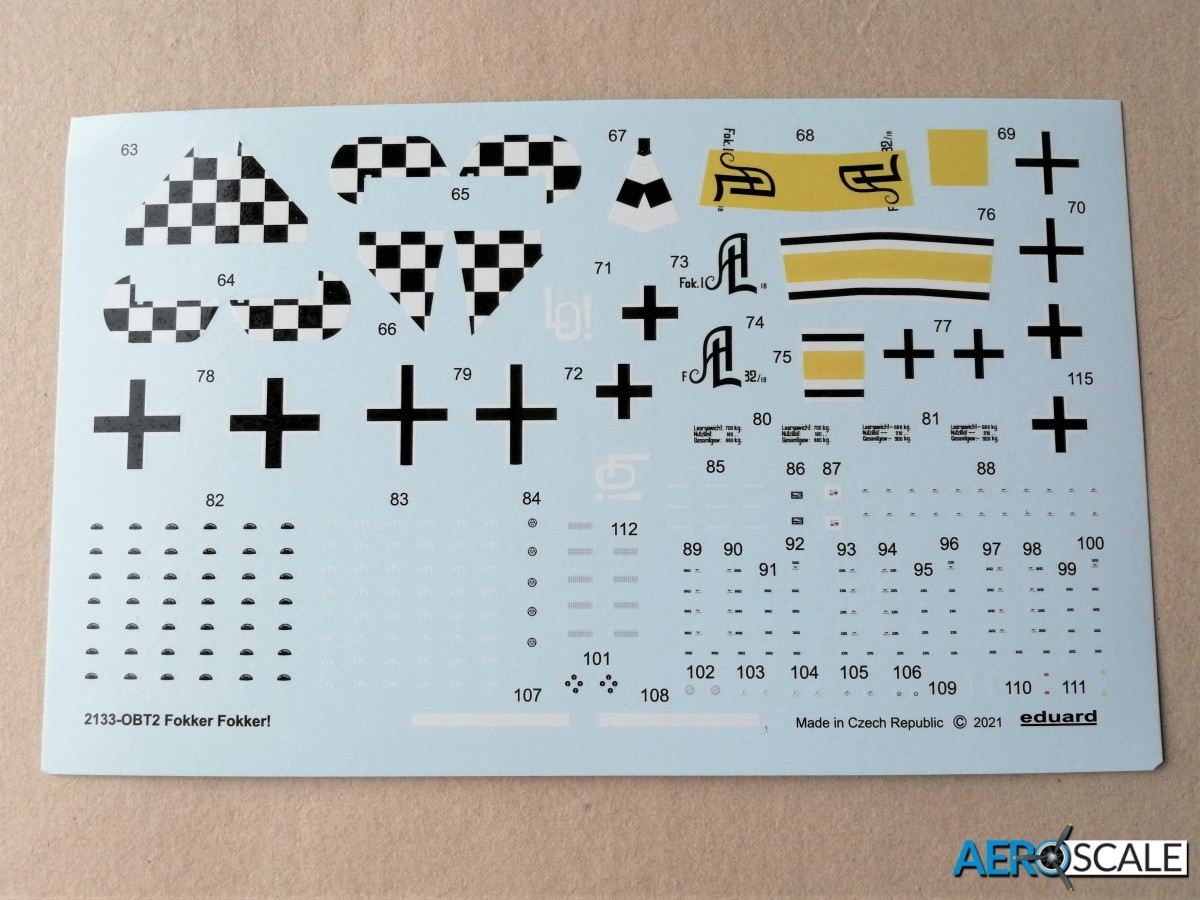 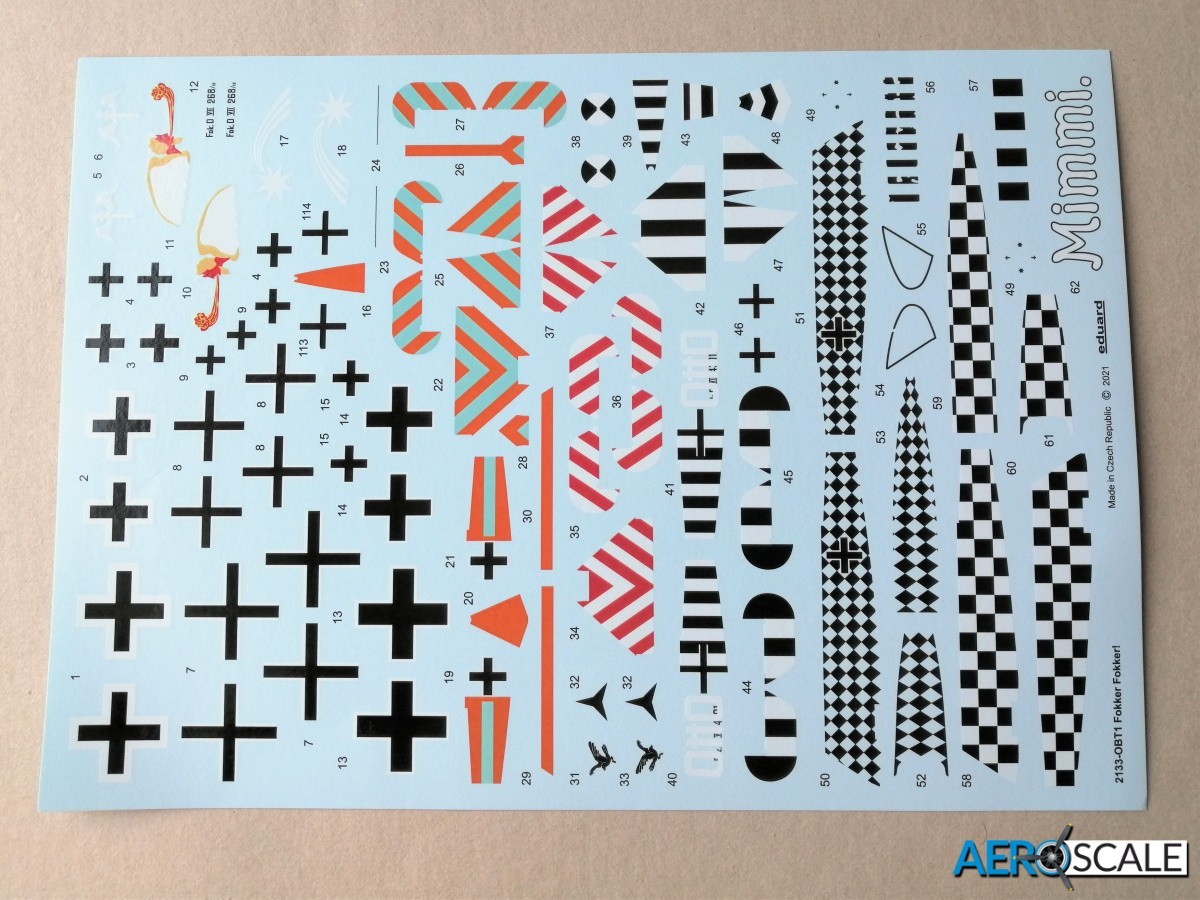 Both the upper and lower wings are one piece. There is absolutely no hint of ejector marks. The tape lines are raised and these will aid the placing of the decal tape later in the build. There are fifty rib tape decals to apply over both wings. No mean task, but essential if you want to make your model D.VII look more authentic. There is the merest hint of scalloping on the upper wing surfaces, but it looks very acceptable. The ailerons on the upper wing have PE actuators including the cable. 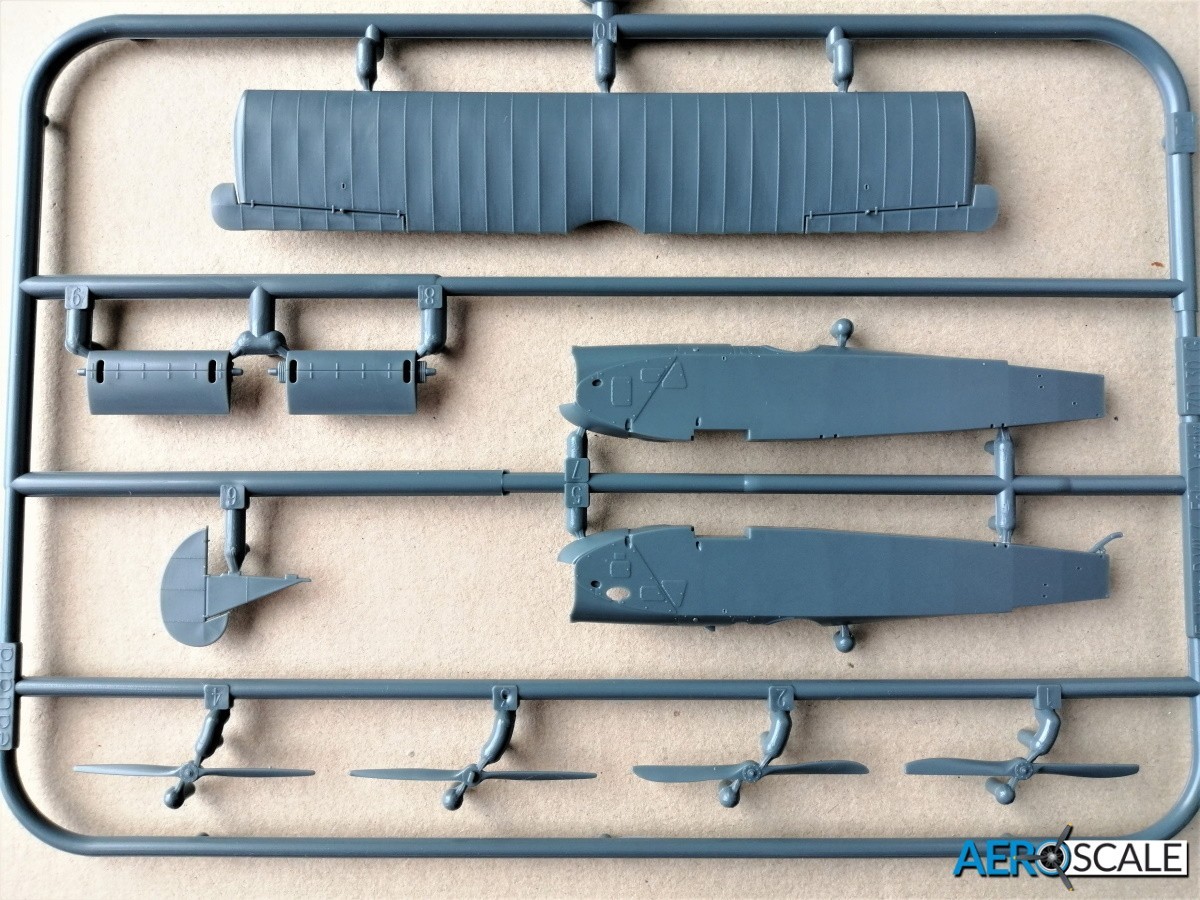 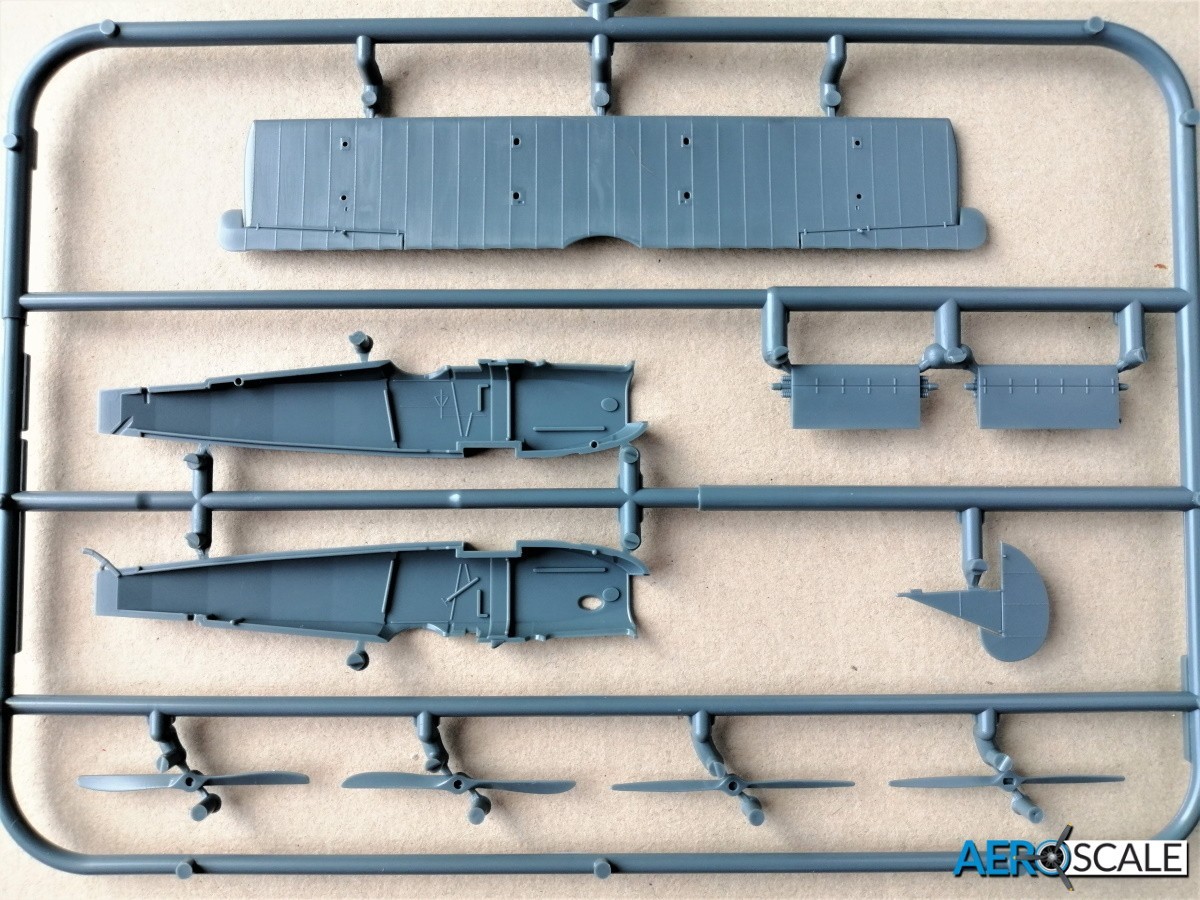 The horizontal tail and elevator are one piece and features raised tape lines. You might want to cut off the elevator and reset it dropped. The elevator has PE actuators including the cable. There are a few control cables to add as well as two bracing wires from the top of the fin to the end of the horizontal stabiliser. 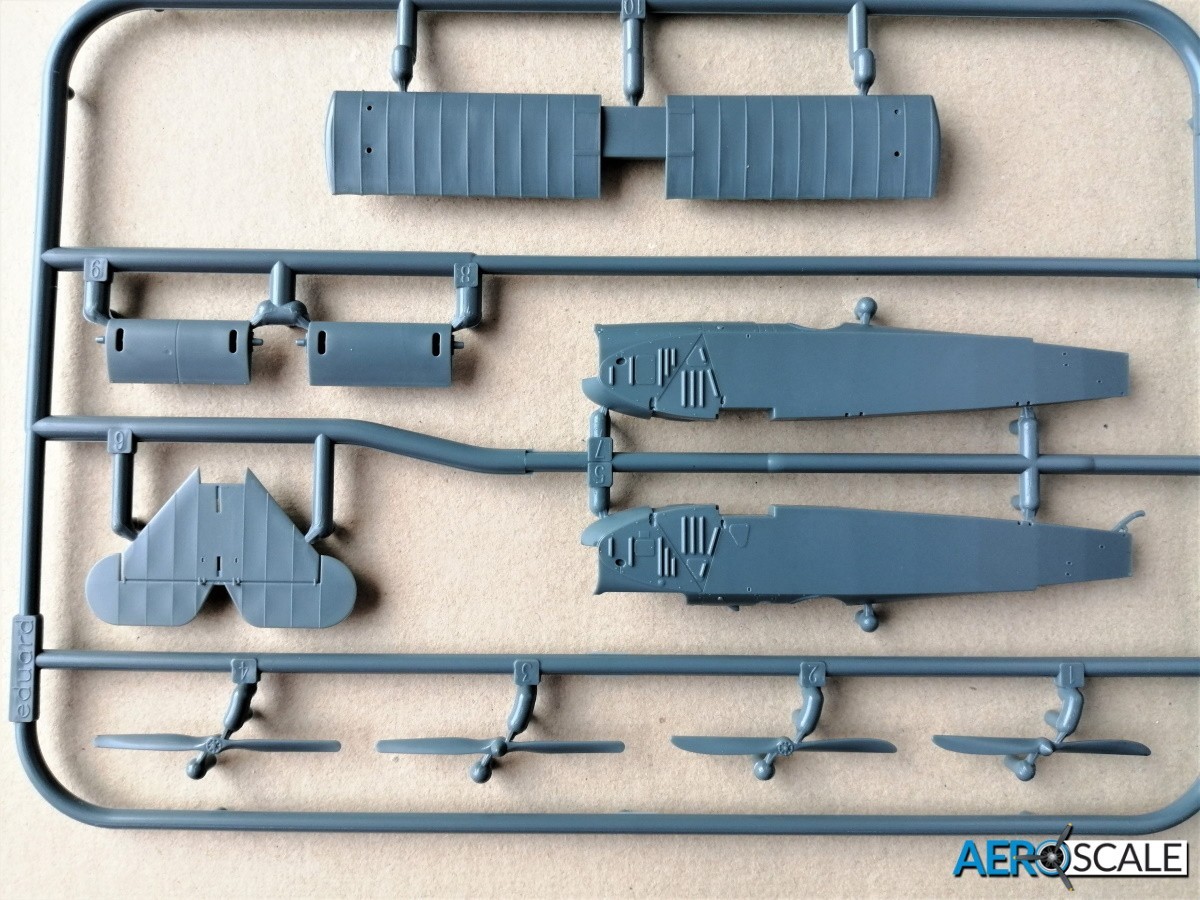 The section of aerofoil between the wheels is one piece. Only one of the six-wheel types is used. Wheels are each one piece and there are paint masks included. There are decals for the one example [F]that has a quadrant pattern on the hubs. Here there a couple rigging lines to apply, a couple of illustrations in the instructions indicate where to locate them. There are paint masks included for the wheels. 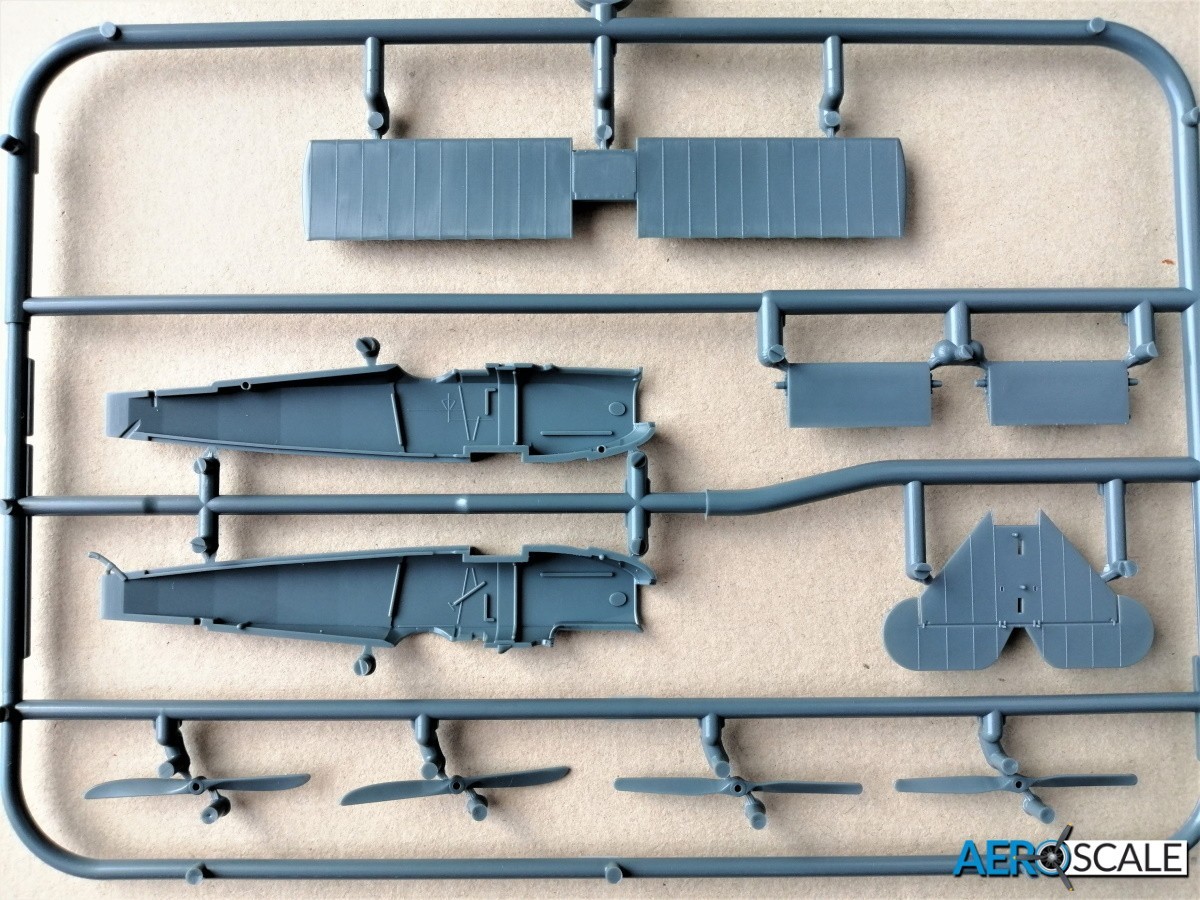 There are six decal sheets and they are printed by Eduard. Two sheets featuring the polygon patterns and the rib tapes. One nice touch is the marks in the polygon pattern where the holes for the struts are located. I really can’t say how accurate the colours are, but we know Eduard will have tried their hardest to get this right. The number of rib tapes is a little intimidating, but it looks as if one rib tape does both upper and lower surfaces of the wings. There are twenty-eight ribs on the upper wing and the lower wing has twenty-two. There are a few spare tape decals in case of mishaps. There is also tape for the leading and trailing edges and wing tips. Obviously,you will need a fair amount of your favorite decal setting solution handy as there will multiple decals placed over each other: polygon, rib tape and crosses. There is barely any excess carrier film even on the complex shaped Jasta markings. 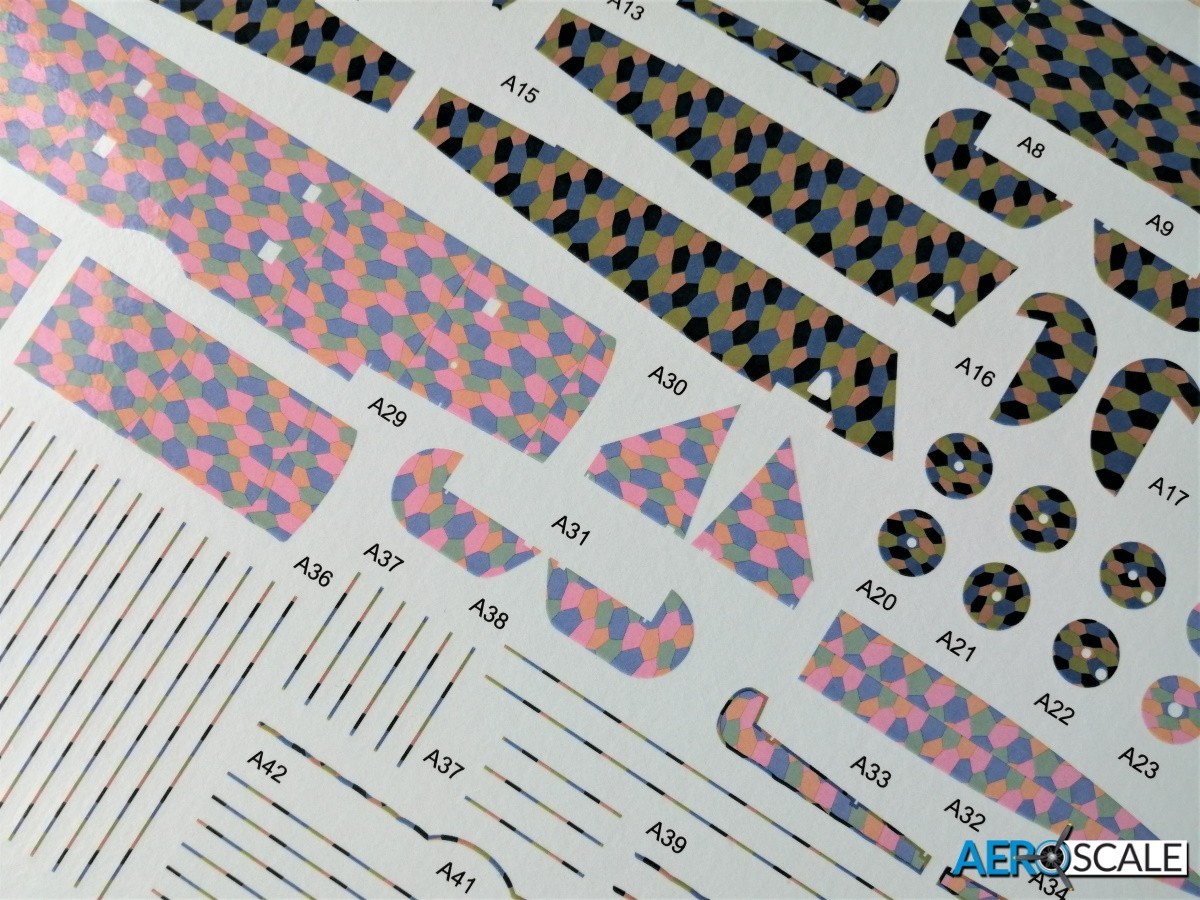 There are twelve very colourful marking options to choose from and there are a wealth of decals to help you depict the printed polygon fabric. 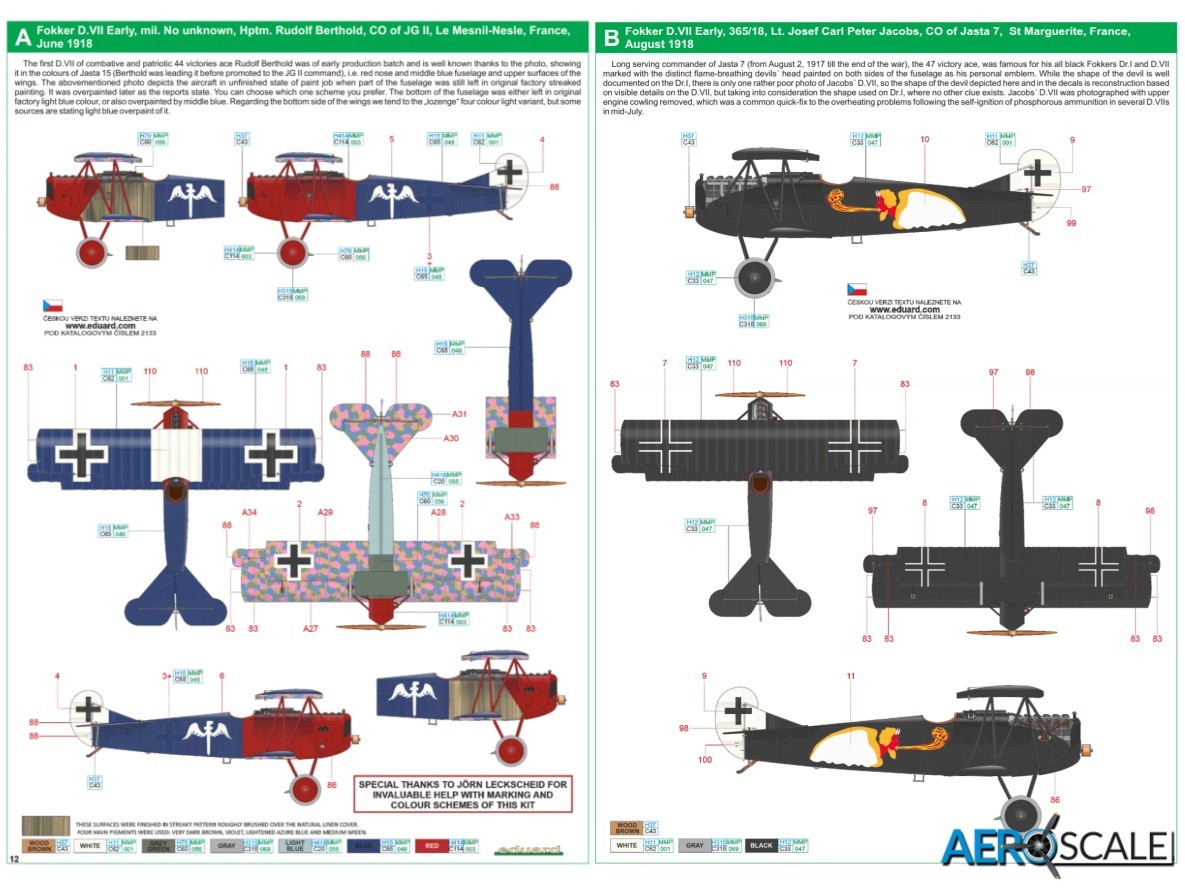 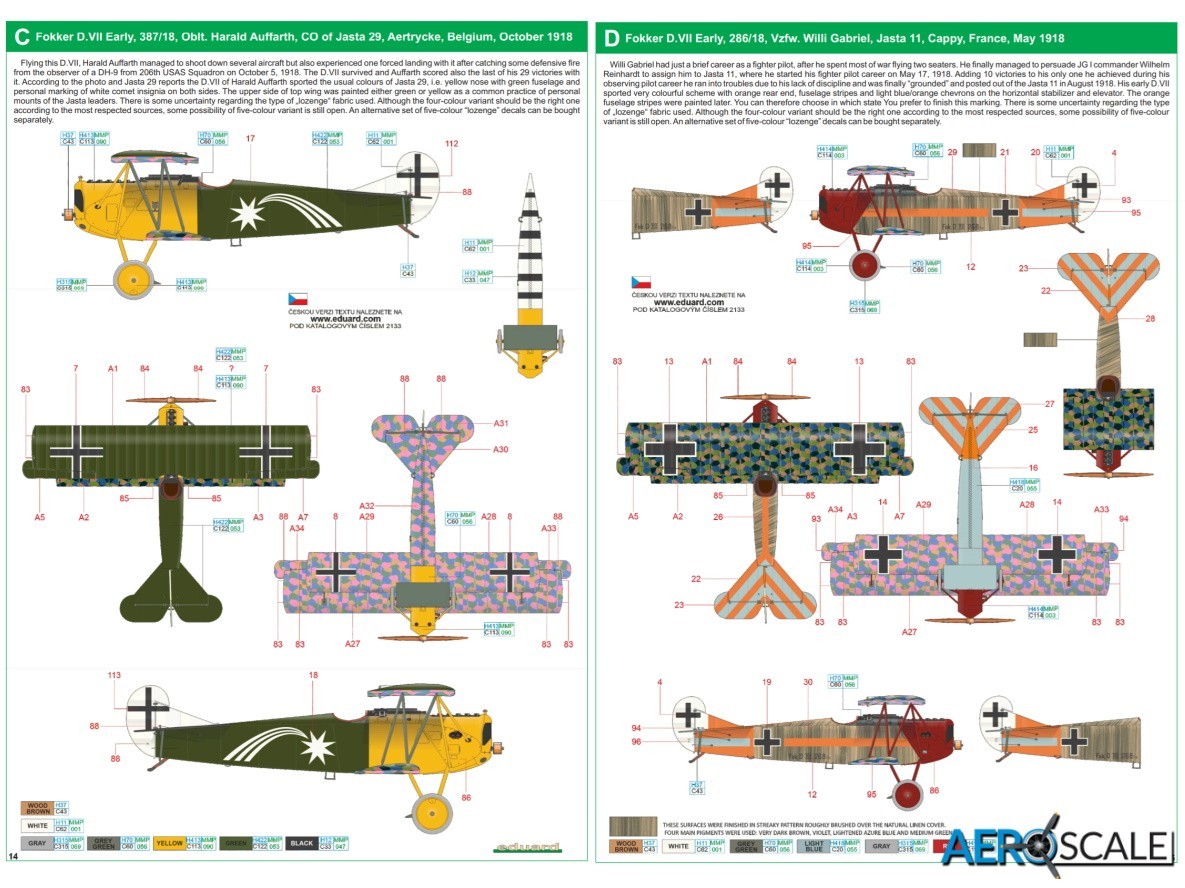 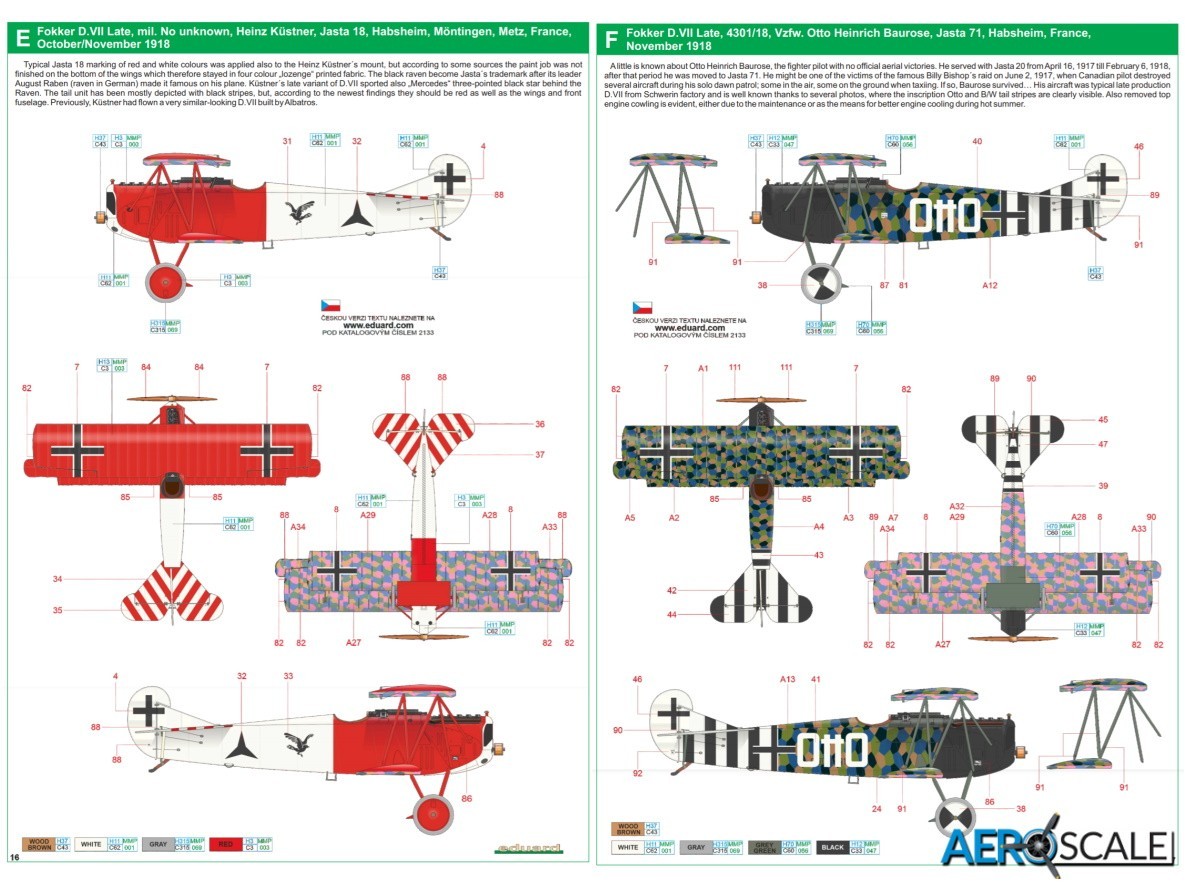 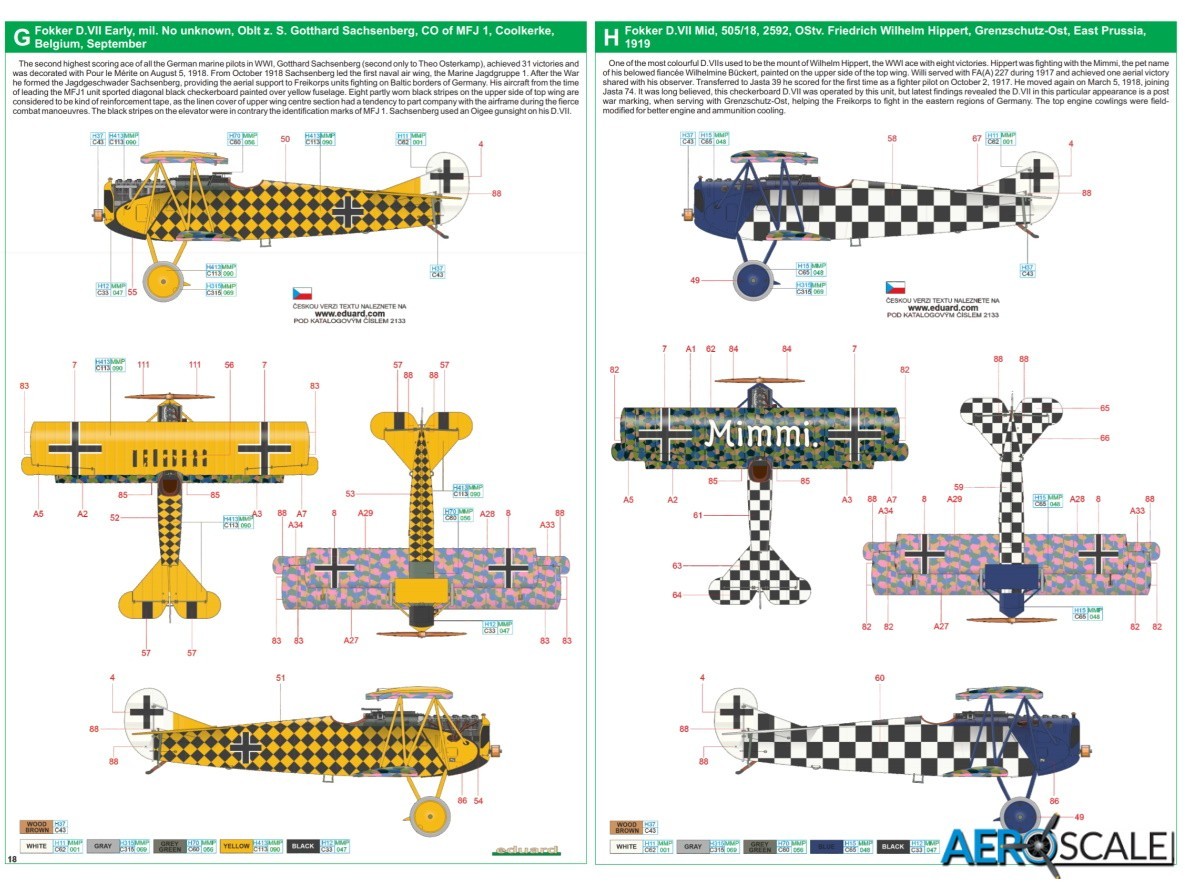 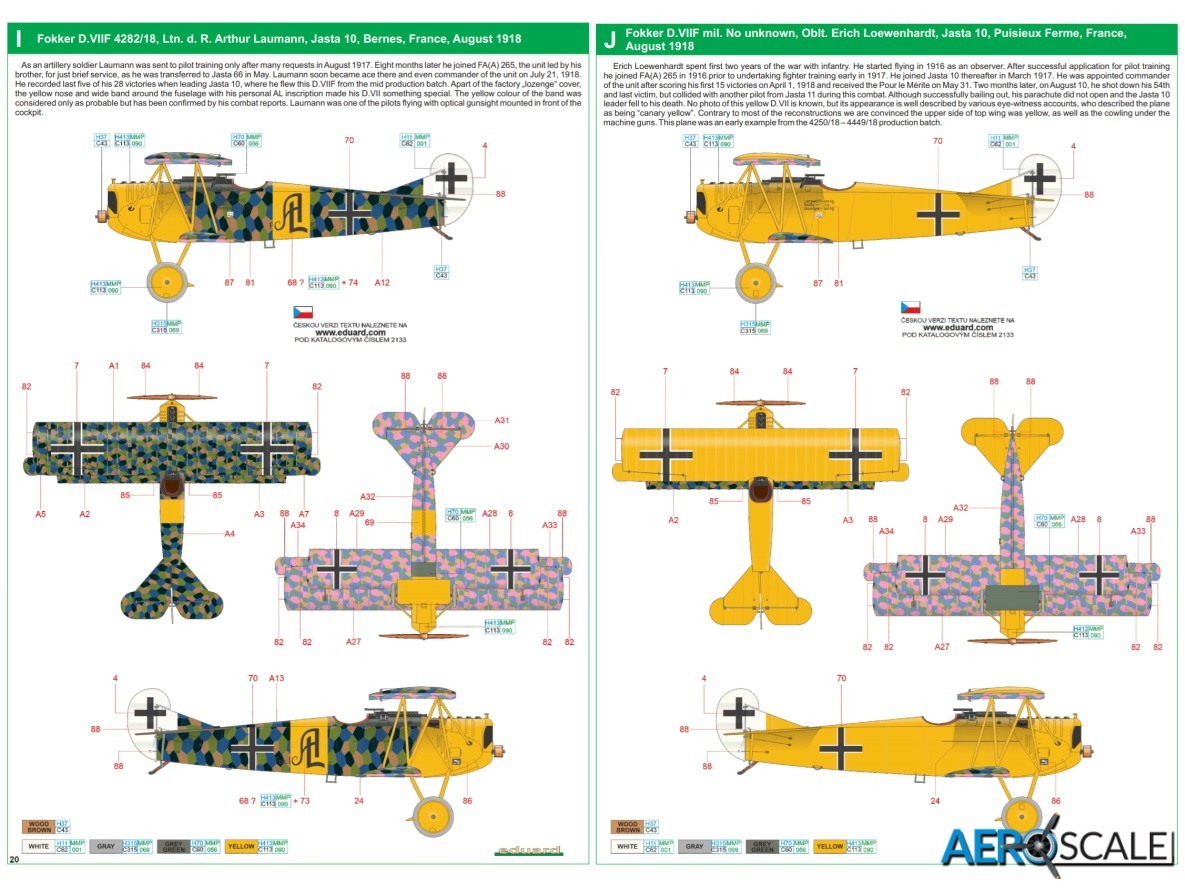 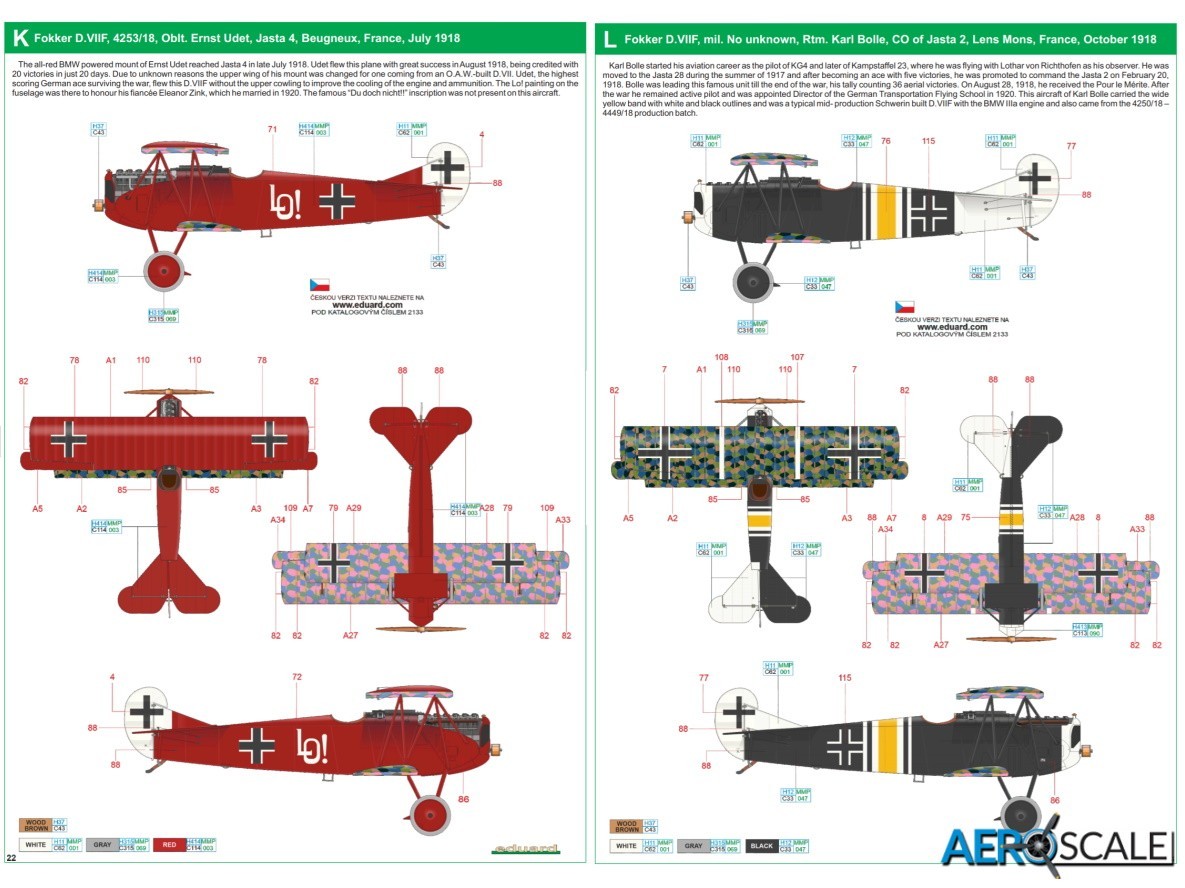 The A4 booklet has twenty-four pages half of which covers the marking options. There is a useful guide to the history of the Fokker DVII outlining many of the production variations. The variations in the airframe will certainly keep you on your toes as following the build guide will require your full attention. The painting guide is in colour and there are upper and lower plan views as well as both side views. There is a page specifically for the polygon pattern decals and the rib tapes. Gunze and Mission Models paint numbers are used for colour reference. 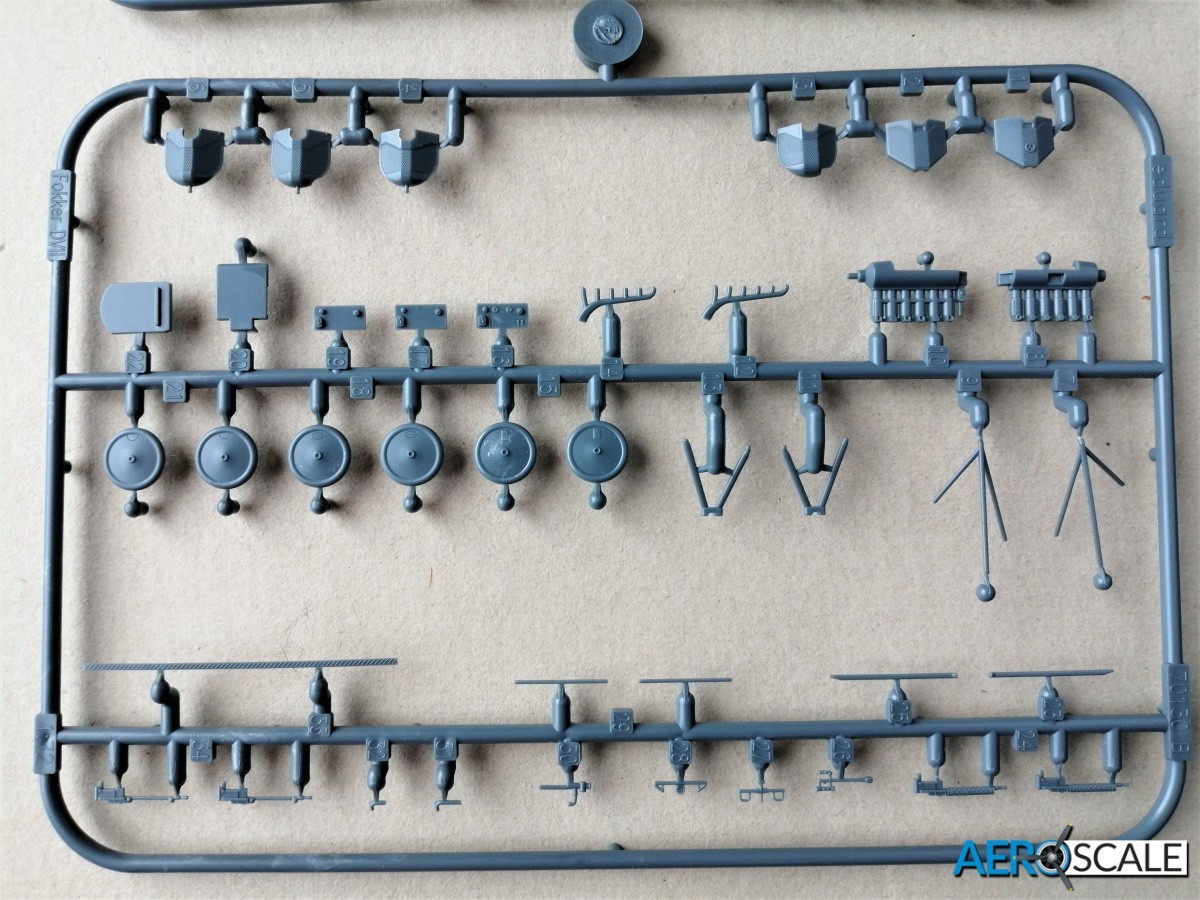 The model when built may be be diminutive, but the kit itself is packed with detail. There is a healthy mix of plastic, resin and photo etched parts, not to mention the huge number of decals for the polygon print and marking options. The lack of rigging will appeal to many that fancy dipping their toe into the world of WWI aviation. Eduard has produced the ultimate Fokker D VII in 1/72 scale. 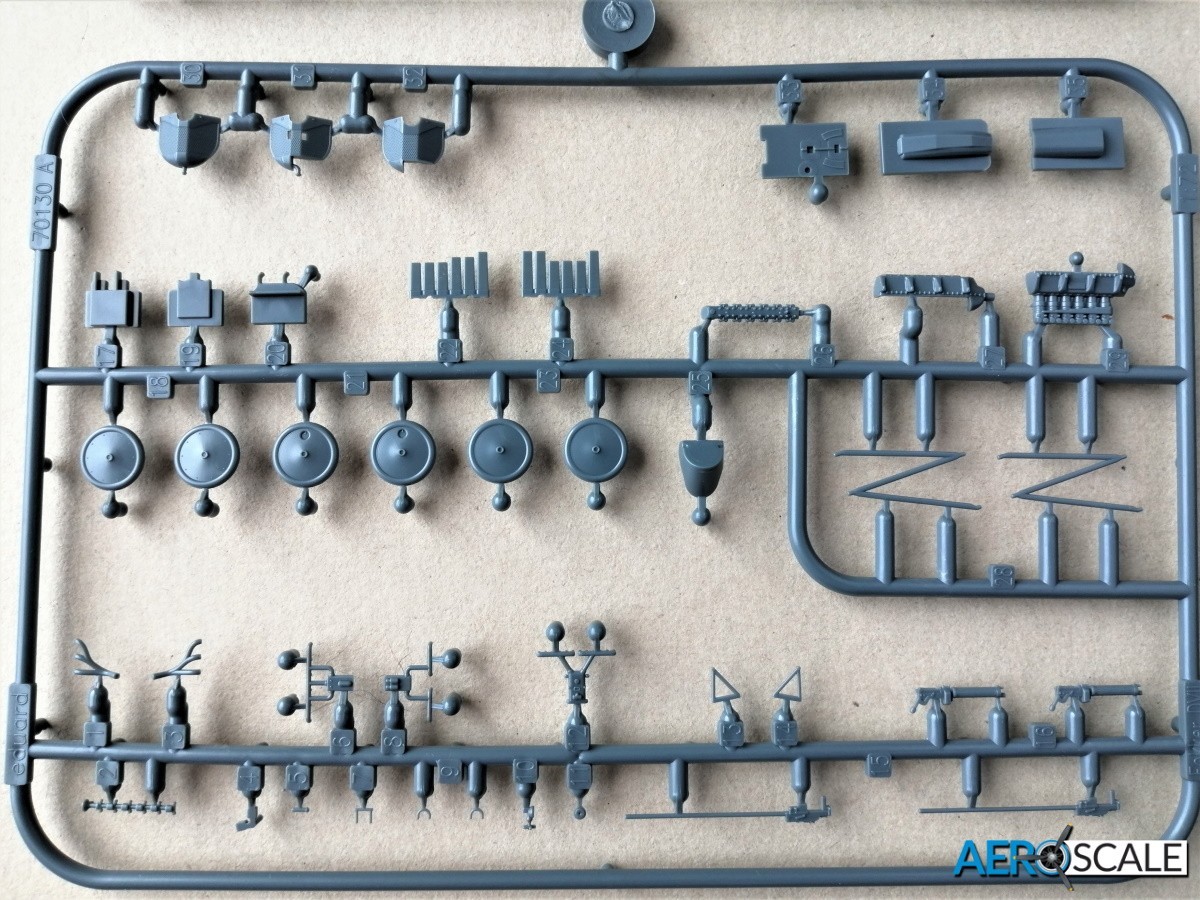 Our thanks to Eduard for this review sample.