Litespeed
Editor
posted on 2 weeks ago — updated on 2 weeks ago
579
views
ARMA Hobby has continued with its fine line of Grumman Wildcat 1:72 scale releases with the F4F-4, Tim Hatton takes a look 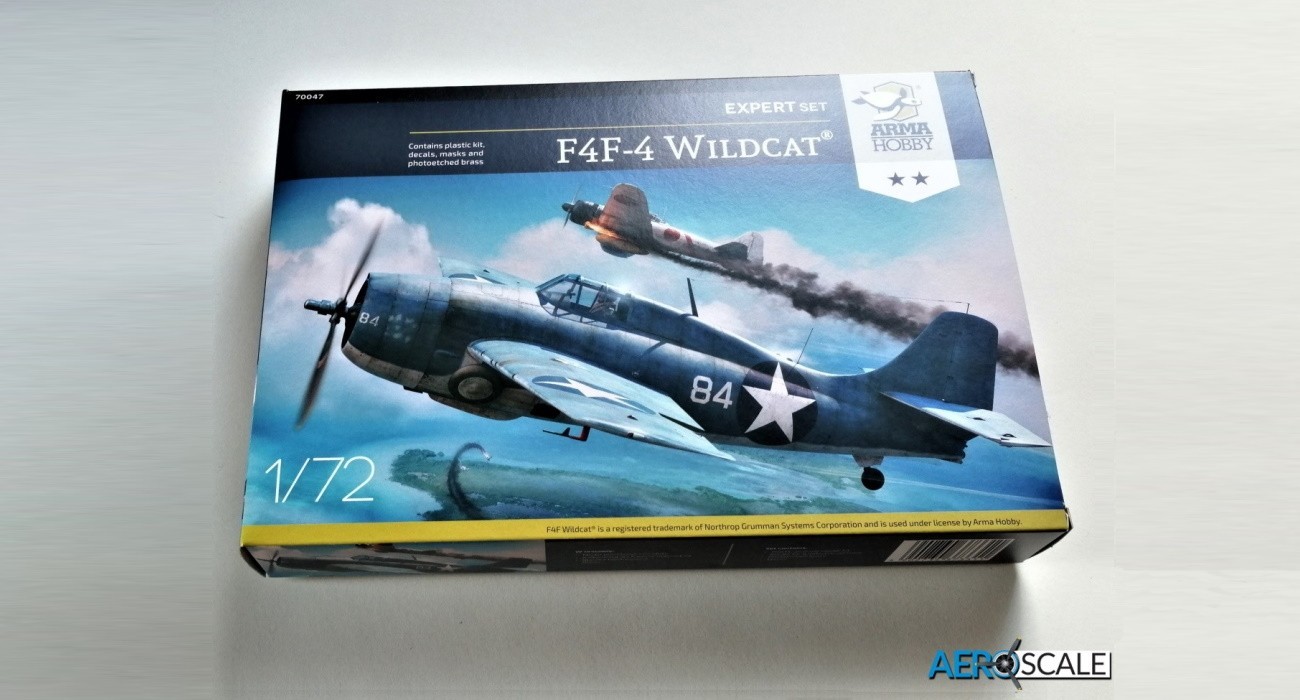 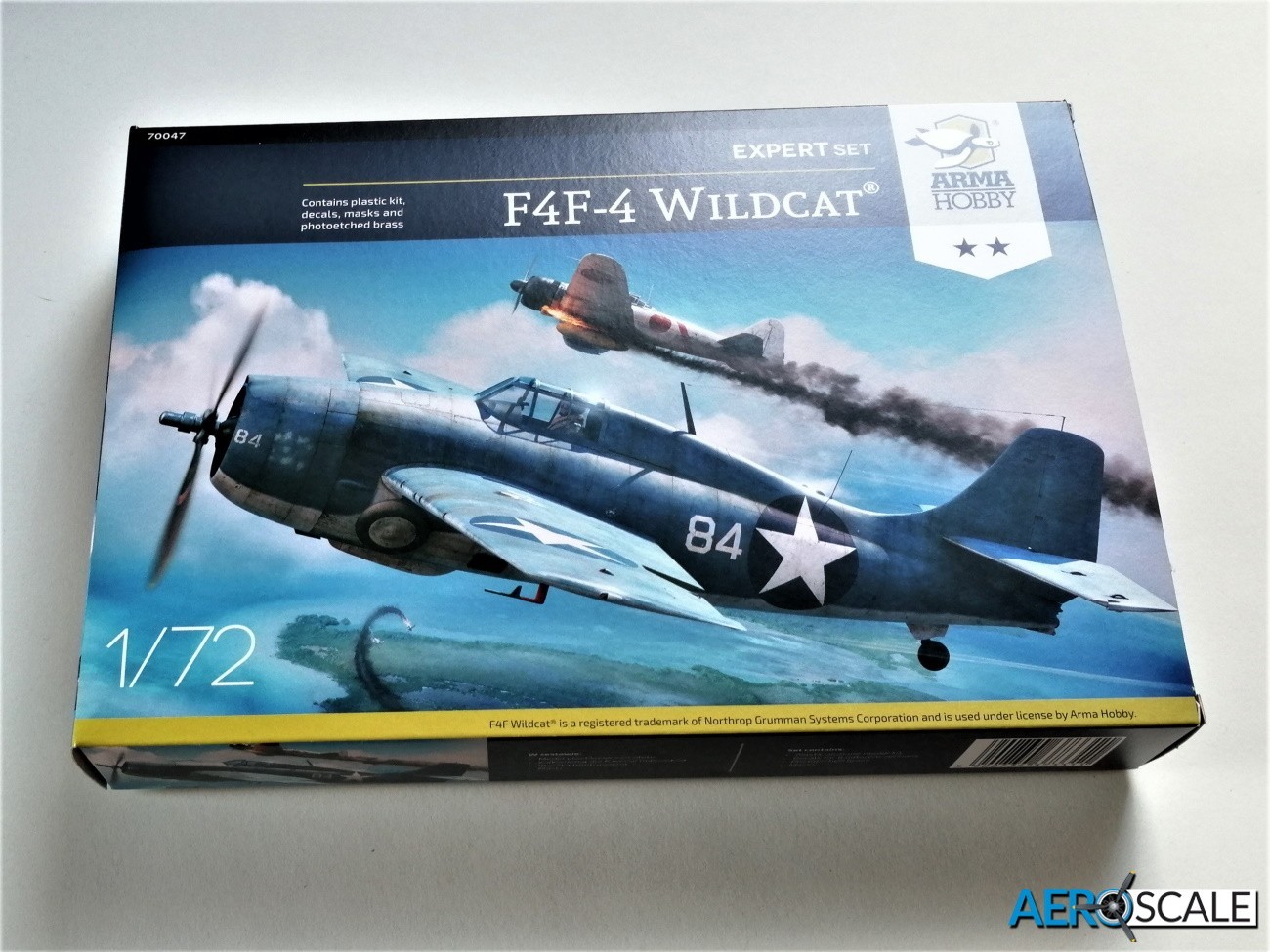 The Wildcat stemmed from a line of Grumman aircraft that served with the US Navy. Initially the US Navy ordered a limited number of the XF4F-1 as a backup in case the preferred choice of the Brewster Buffalo did not live up to expectations. Grumman went back to the drawing board and came up with the much-improved XF4F-3, with the new wings and tail and a supercharged version of the Pratt & Whitney R-1830 "Twin Wasp" radial engine. The improvement led to orders of the production model [F4F-3] from the US Navy, British Fleet Air Arm [FAA] and France. With the fall of Europe the aircraft bound for France were delivered to Britain and were subsequently named the Martlet. Later the FAA adopted the US Navy and Marine name Wildcat. It proved to be successful in the air war over the north Atlantic, shooting down many Luftwaffe raiders. Out in the Pacific against the Japanese Zero the Wildcat was very successful, despite the Zeros superior performance. Taking advantage of its better performance at altitude enabled it to be used successfully in the tactic of diving – hitting - running. In defence the Beam Defence Position or the Thatch weave was devised by John S. Thatch, a tactic that provided a highly effective against Japanese fighters. 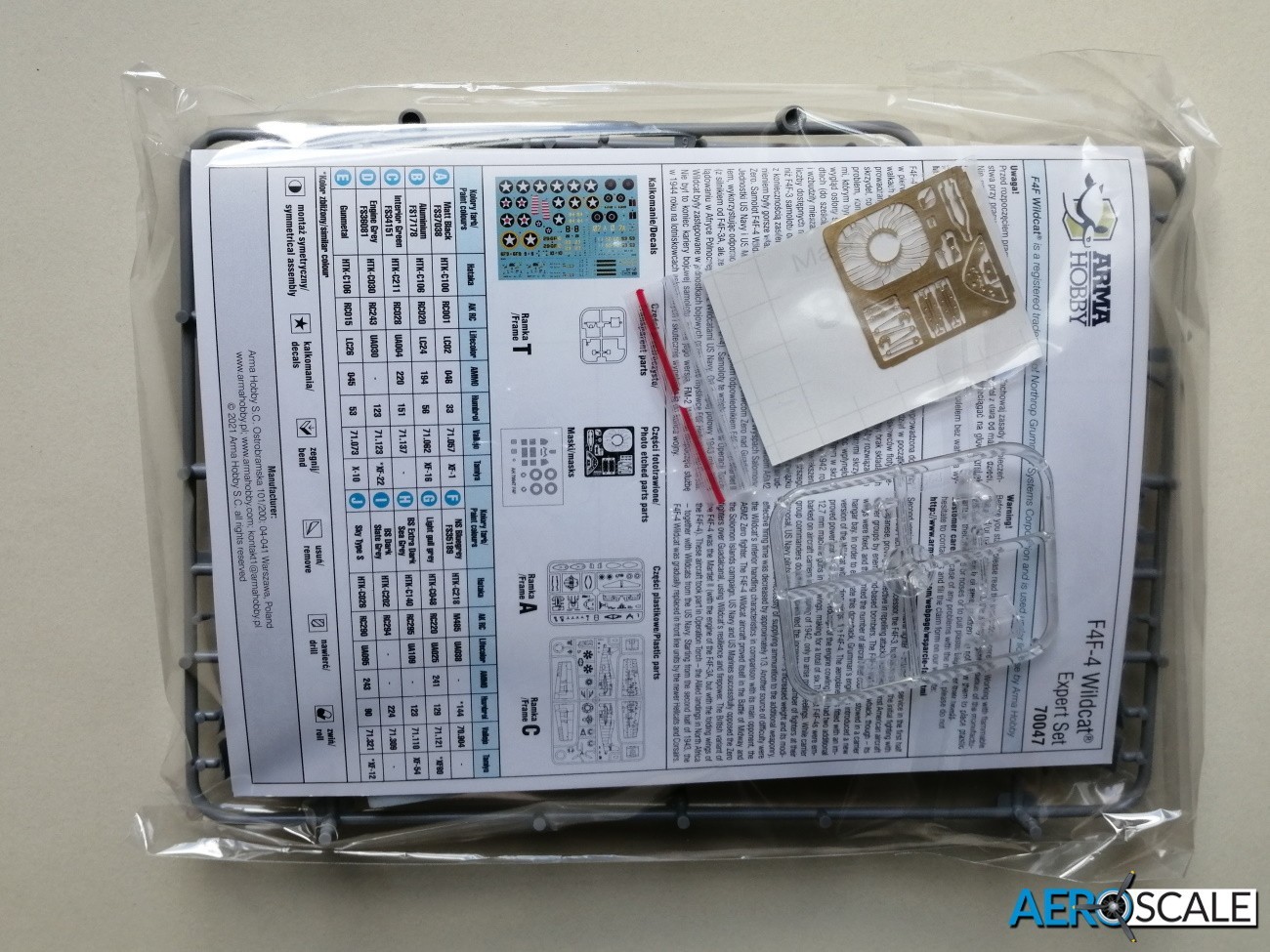 This kit by ARMA Hobby of the Grumman F4F-4 Wildcat was the first version to have folding wings. A huge advantage particularly on the small escort carriers from which the F4F-4 would operate.

One of the finest test pilots of the era Eric M. "Winkle" Brown had high praise for the Wildcat

“I would still assess the Wildcat as the outstanding naval fighter of the early years of World War II ... I can vouch as a matter of personal experience, this Grumman fighter was one of the finest shipboard aeroplanes ever created”. 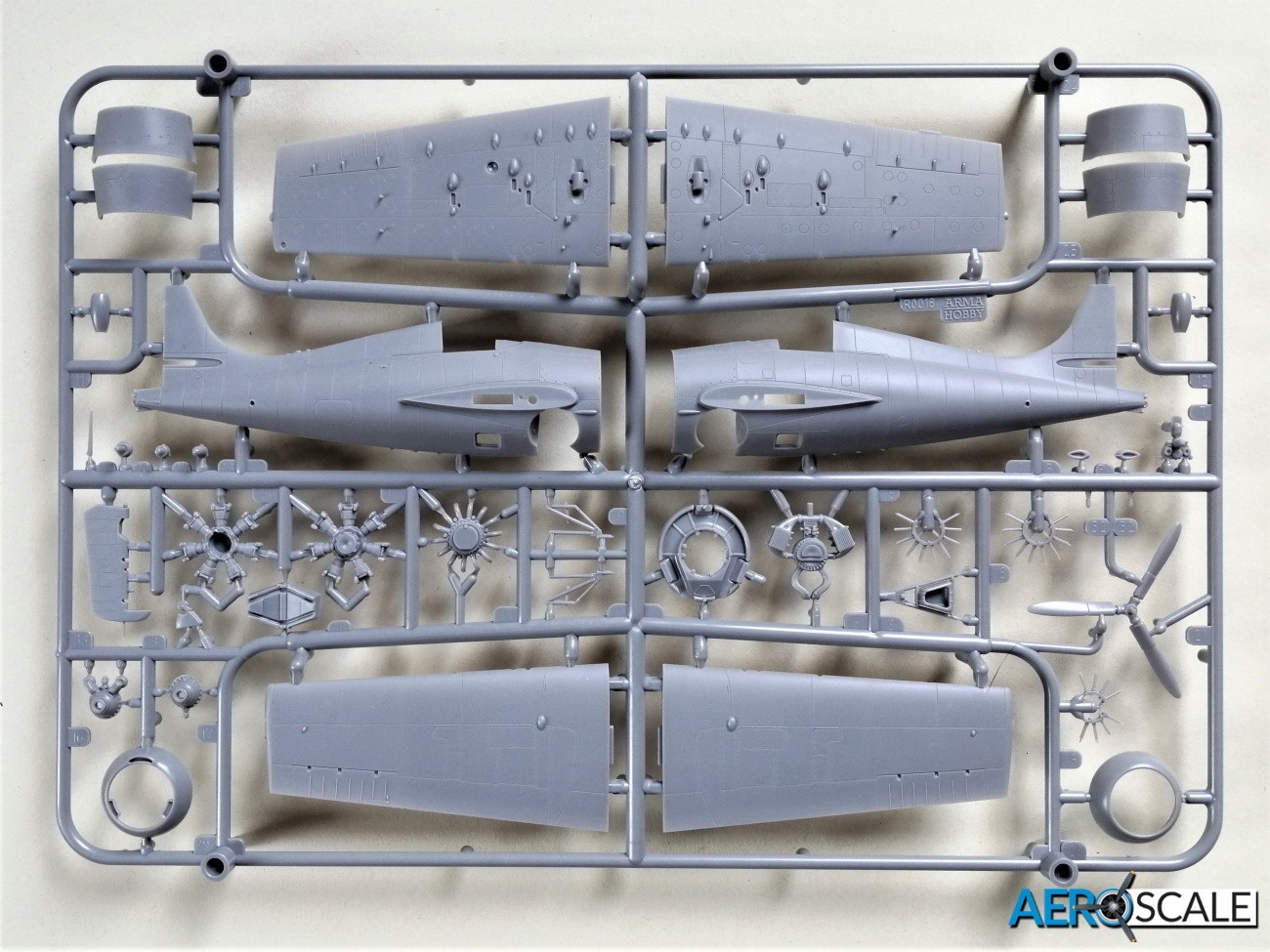 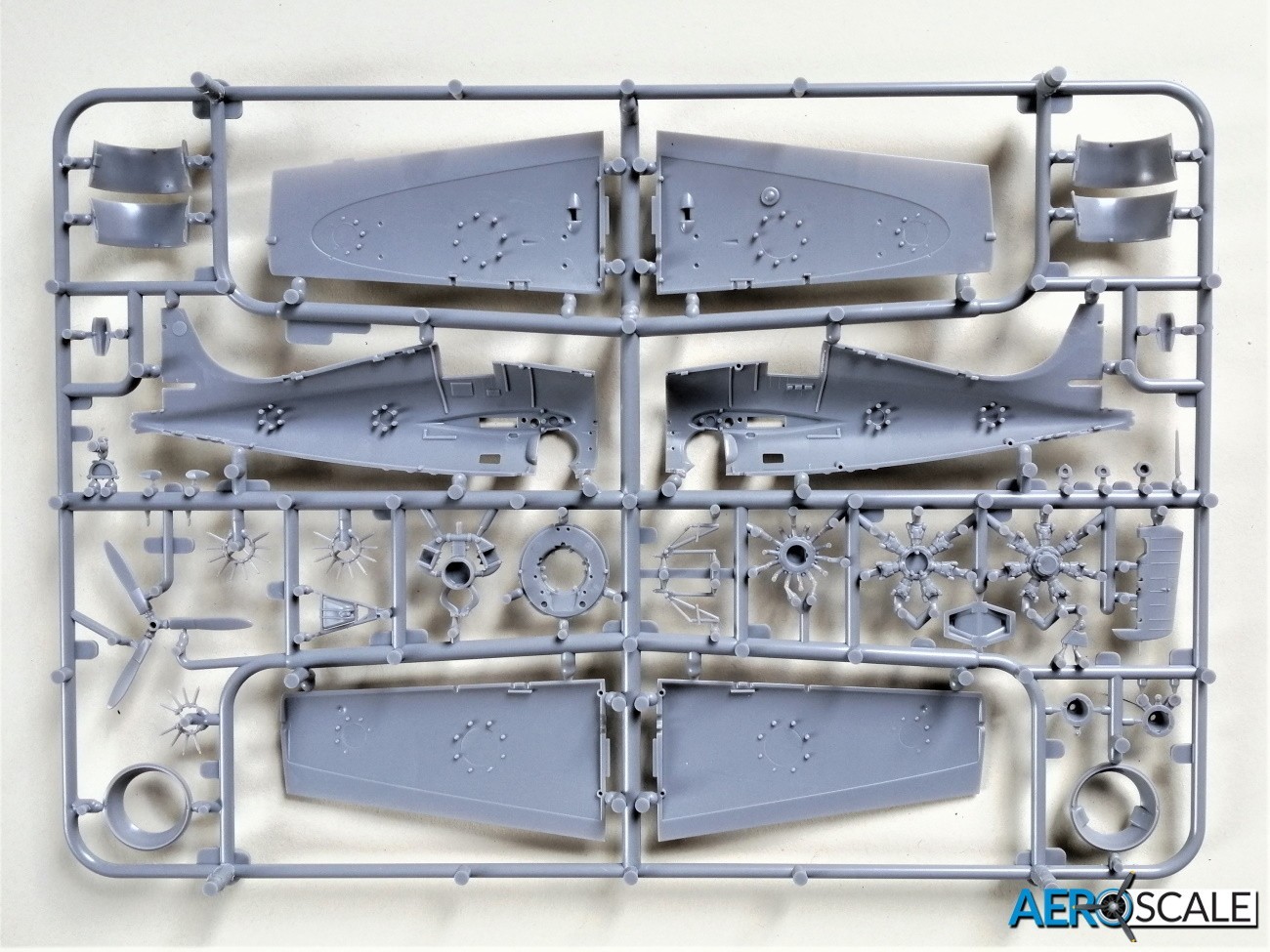 ARMA Hobby has quite a few 1:72 scale releases of the Grumman FM-2 Wildcat and Wildcat Mk. VI under their belts and now it’s the turn of the F4F-4 Wildcat. This is the Expert Set so contains a few additional goodies. Contents includes:

ARMA Hobby utilises side open boxes for their kits, though this looks more robust than the more flimsy ones used by other manufacturers. Everything is packed in one bag, though the photo etched parts and masks are in a smaller bag. The decals are placed within the instructions and the instructions separate the clear plastic parts from the rest of the sprues. 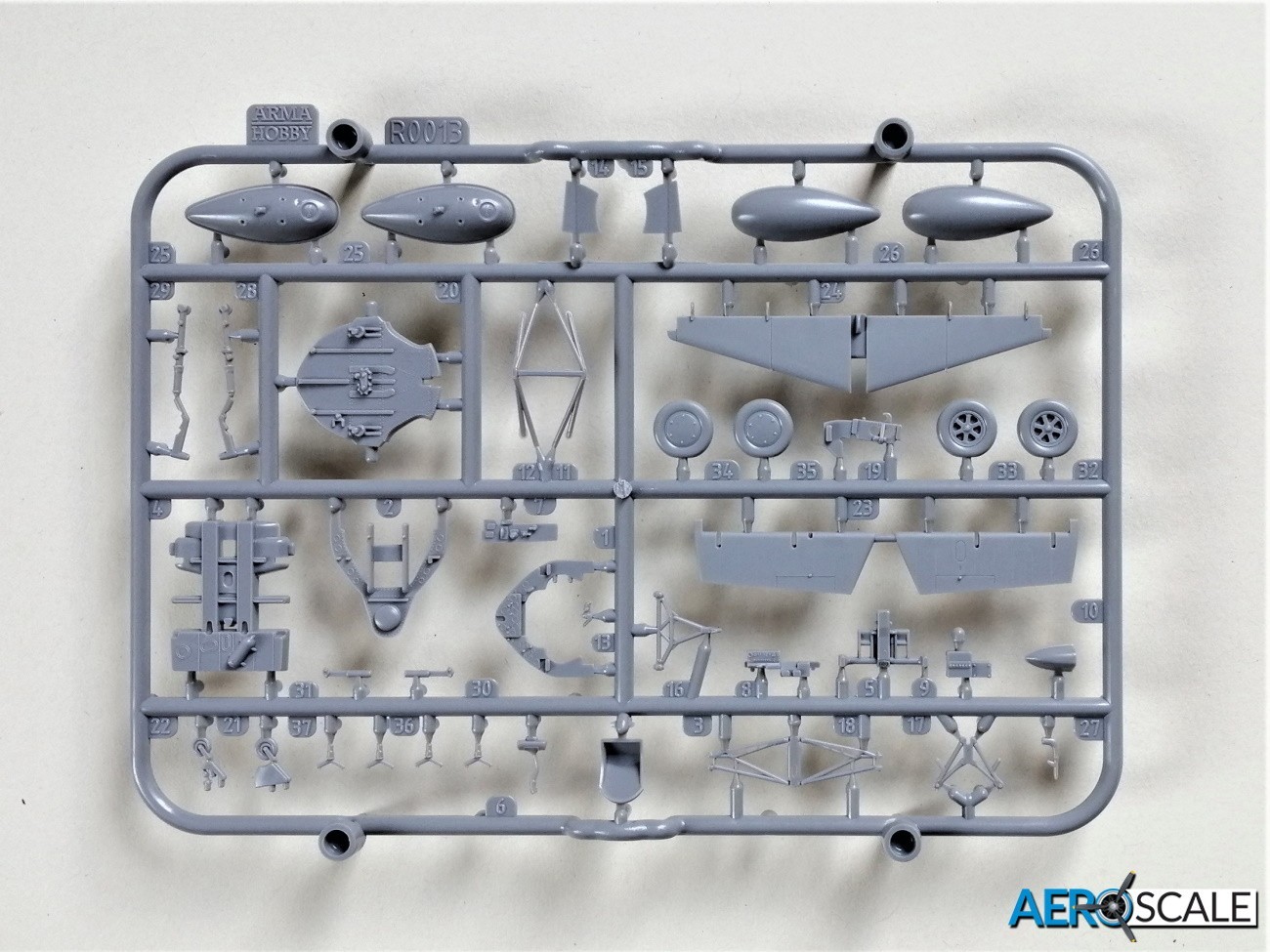 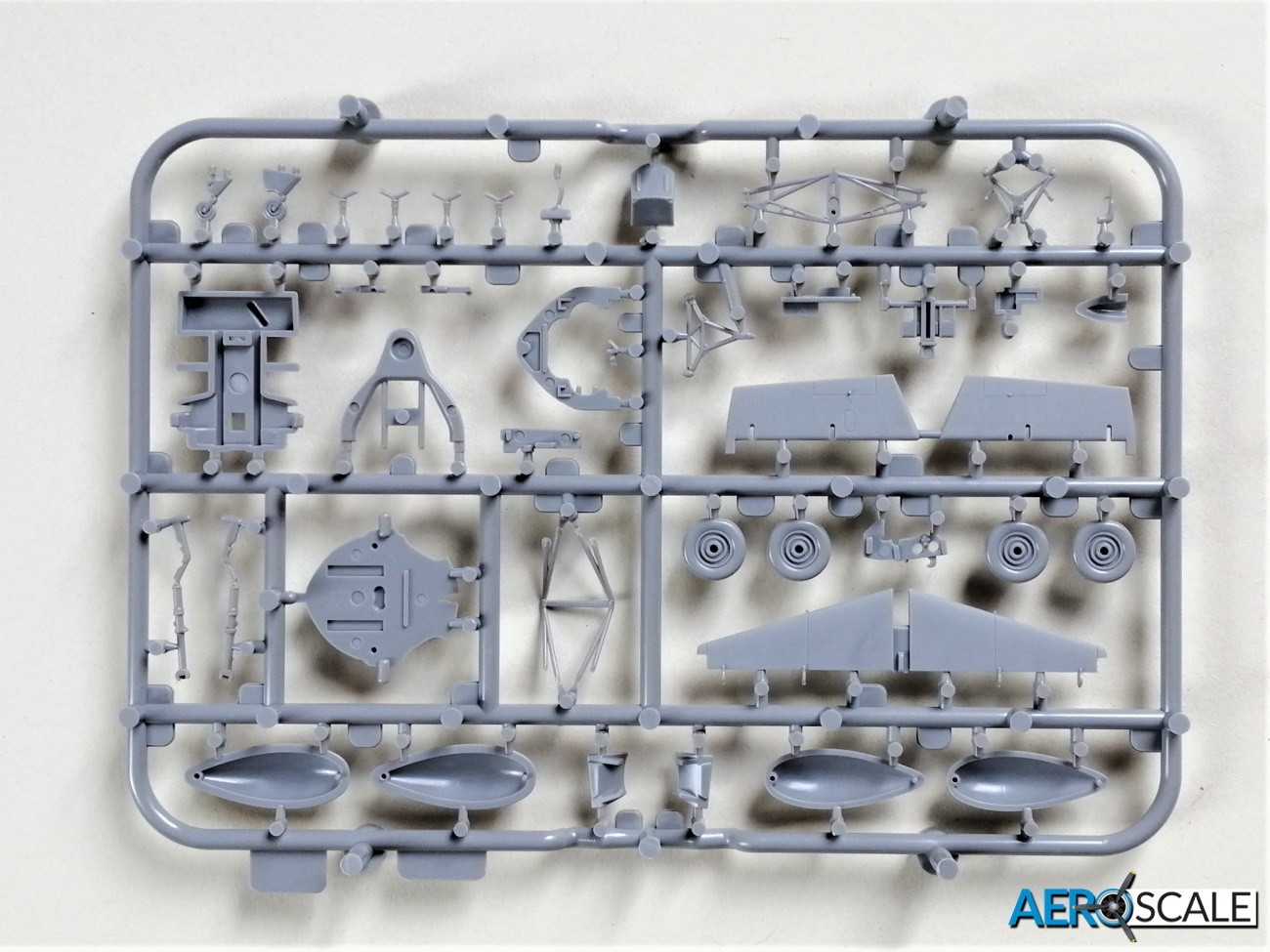 First impression on opening the box is extremely positive. The quality and consistency of the recessed and raised detail is quite superb. Even the piano hinges of the access panels are reproduced. There are around eighty parts on the two grey plastic sprues. There are locating pins on all the major airframe parts. The ejection marks on the inside of the fuselage and wings are unusual and interesting. As are the interlocking sprue spacers. I did check for any evidence of sinkage on the reverse sides to where the ejection marks are, but there is no sign at all. 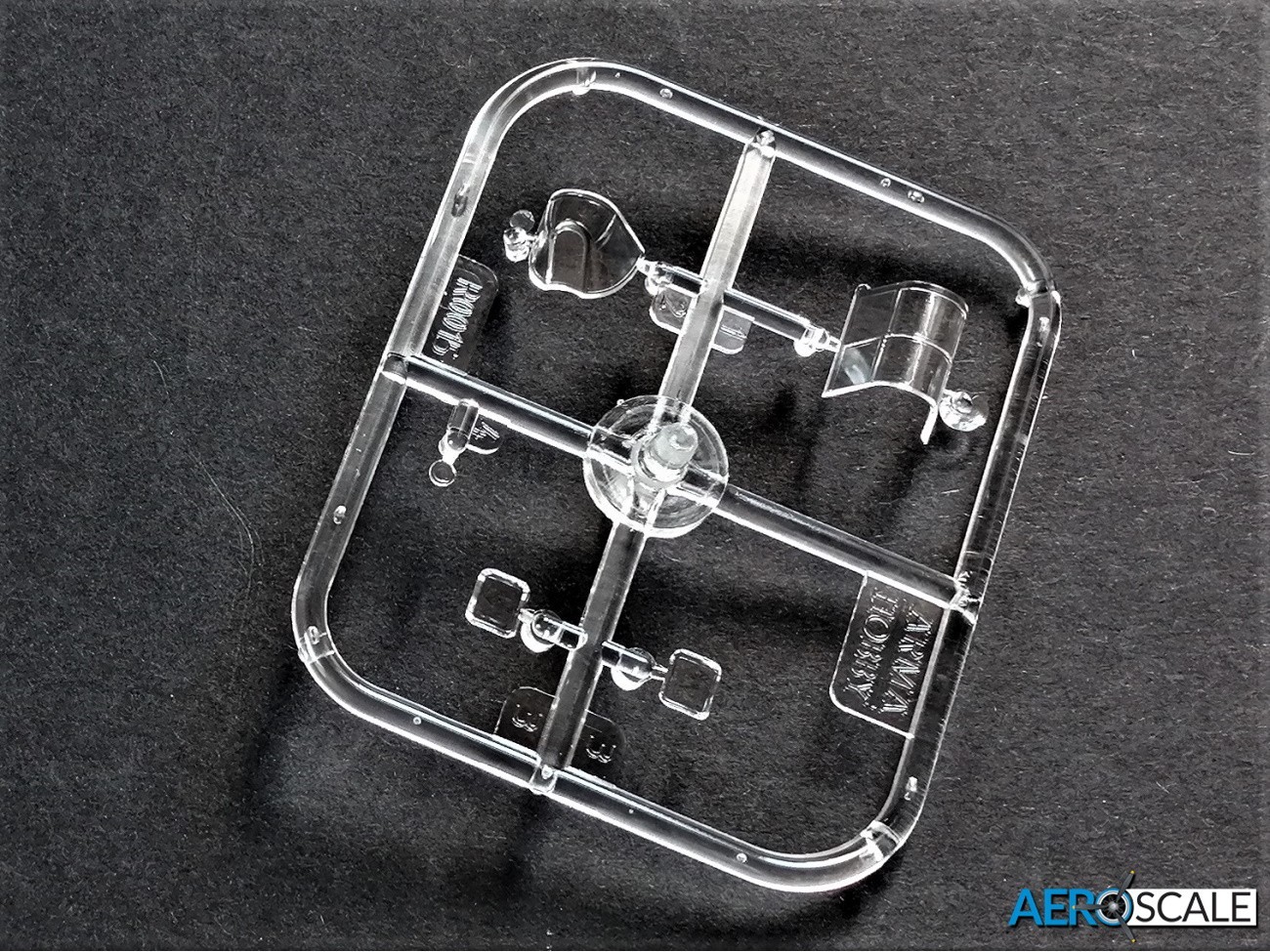 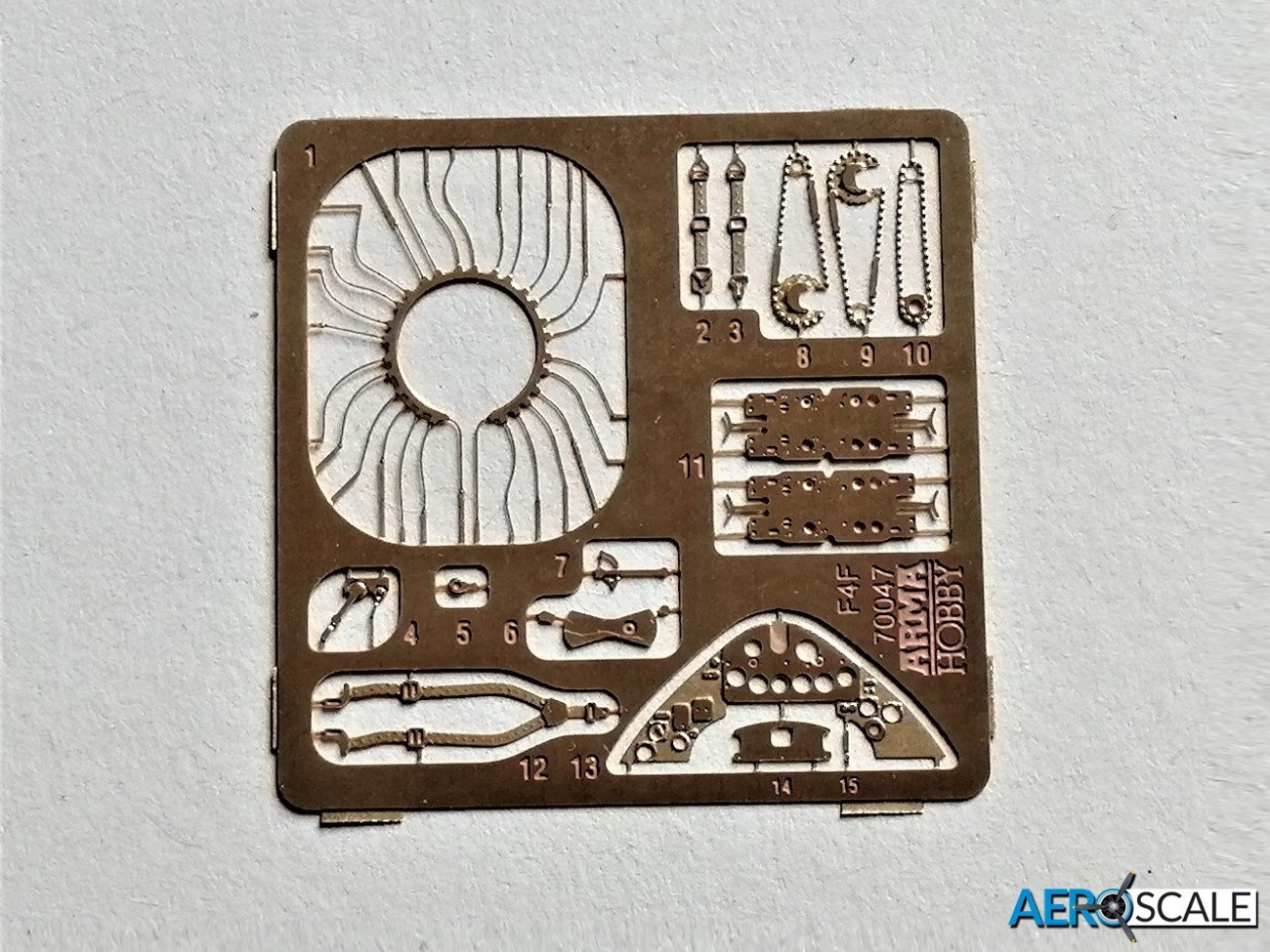 The detail on the plastic for the cockpit parts is superb. Detailing on the frame for the seat, cockpit floor and instrument panel [IP] is very good and some highlighting will pay dividends. The inside of the fuselage is also well detailed. There is a photo etched IP [unpainted], with instrument faces supplied as decals. The raised surface detail on the plastic IP will need to be removed if utilising the PE. There is also a three-part photo etched seat harness [unpainted] and there is also a harness set on the decal sheet. Three PE parts further detail the cockpit and there are decals representing the instruments and placards on the side panels. 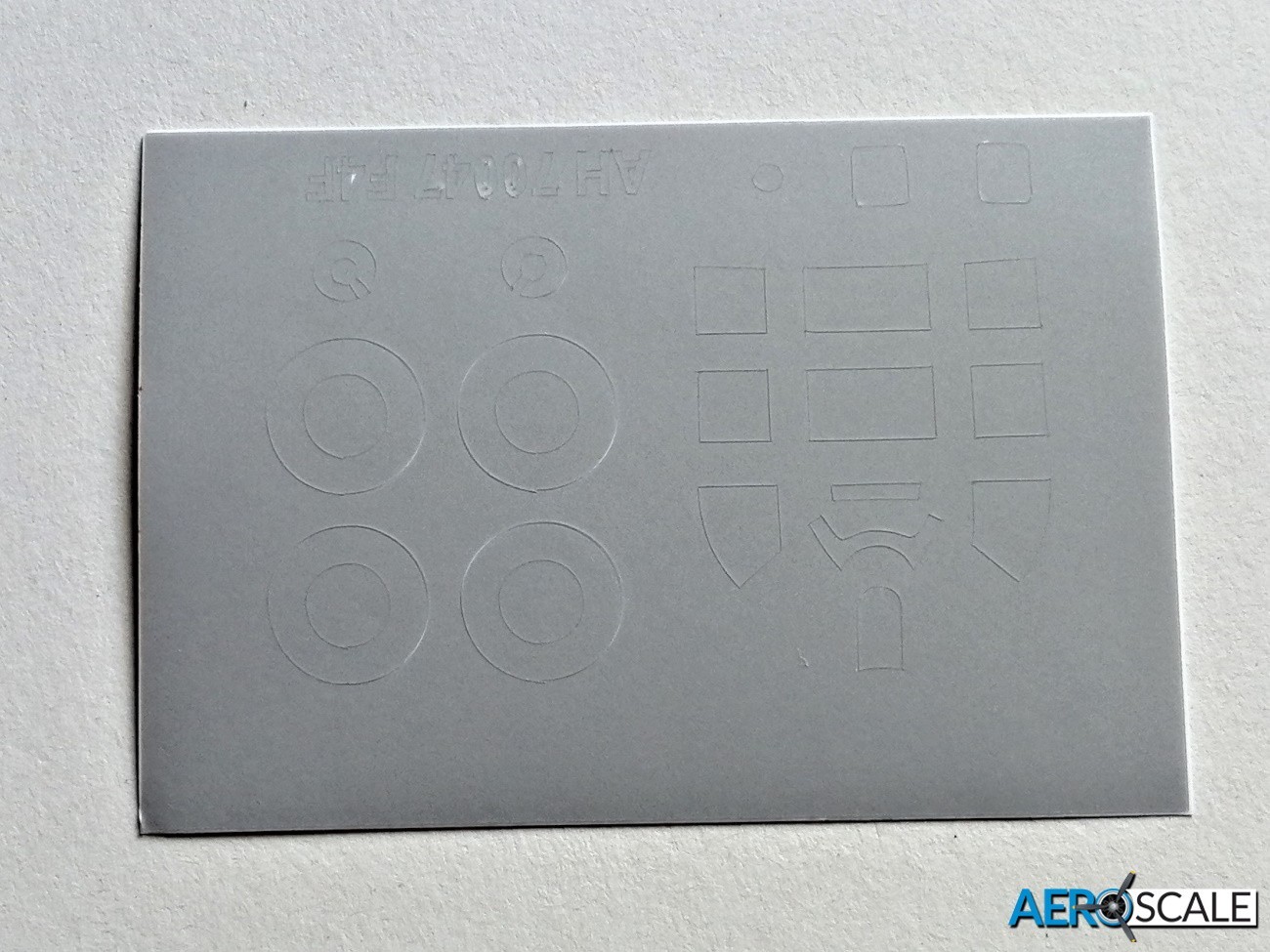 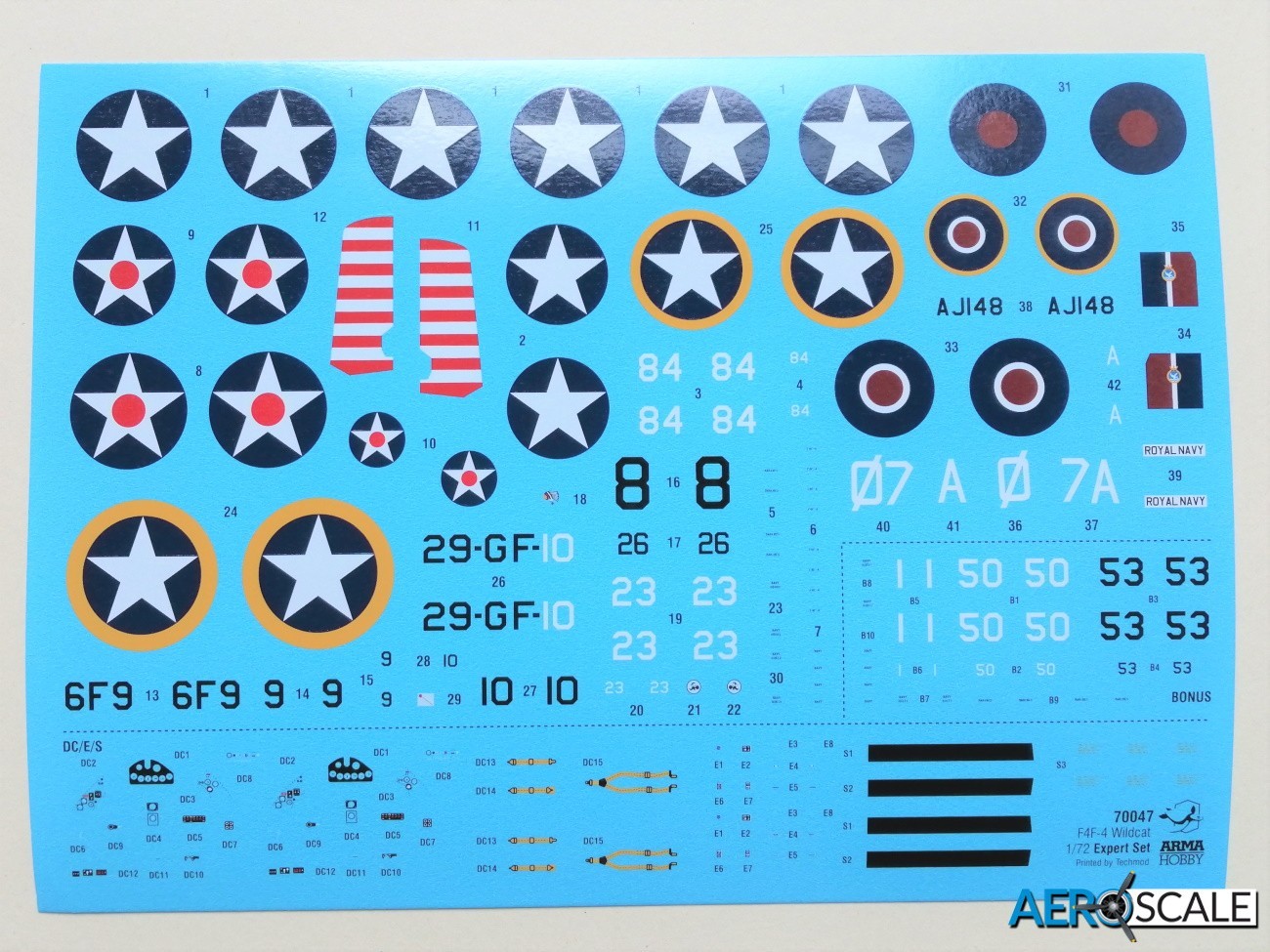 The main undercarriage bay is worthy of a special mention. The design of the ten-part undercarriage provides a fair bit of strength. Detail as well is very good, particularly with the addition of the photo etched cogs and chains. ARMA Hobby has included a jig to help set up some of the undercarriage structure. There are two choices of wheels: spoked or faired. Tyres have a hint of a flattened look and you can even just make out the Goodyear tyre manufactures name on the sidewall. There are paint masks for the wheels. The instructions have multi view images of the various phases of construction of the complex gear, and it does look very impressive when completed. In contrast the two choices of tailwheel are both one piece. 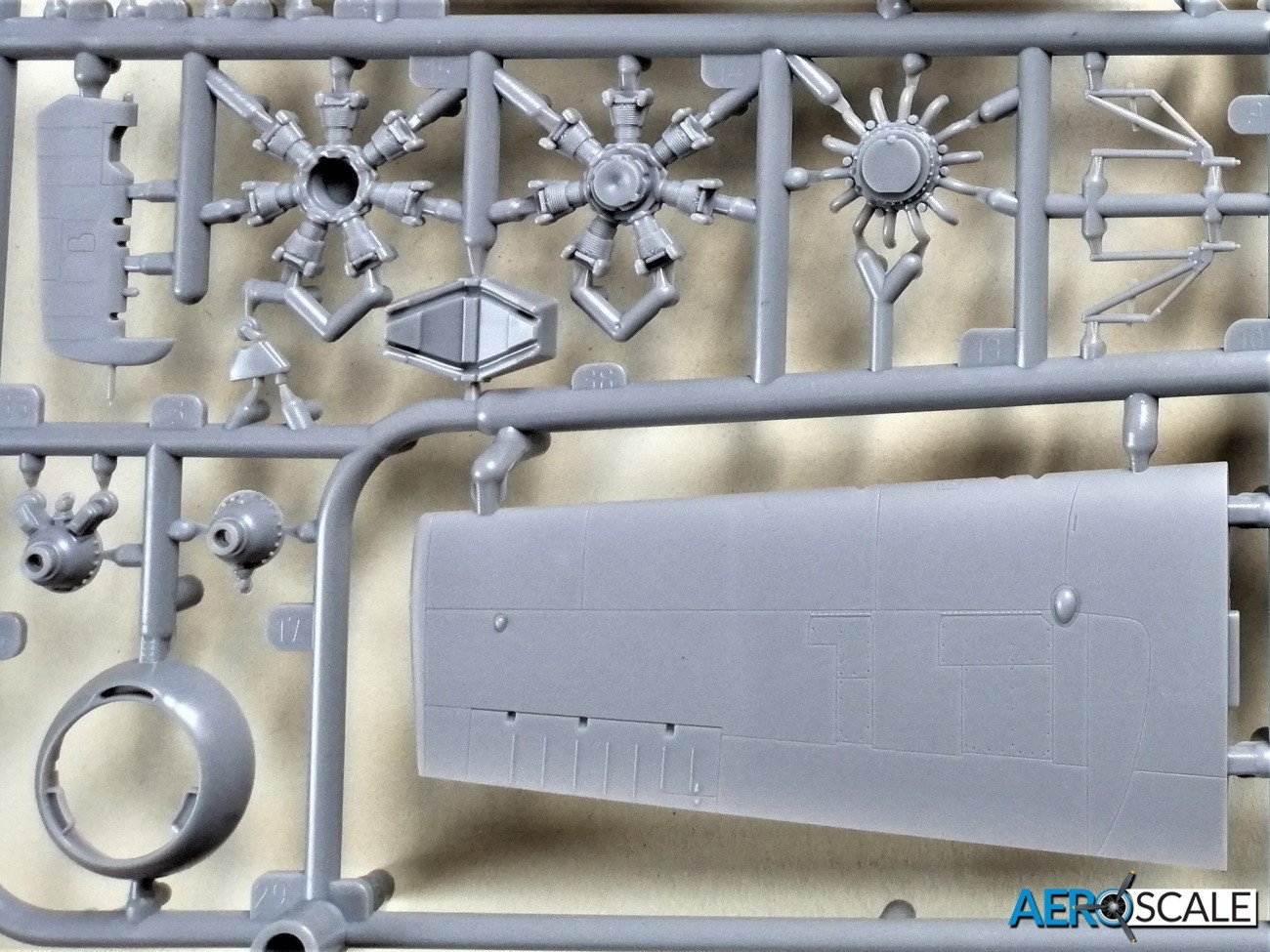 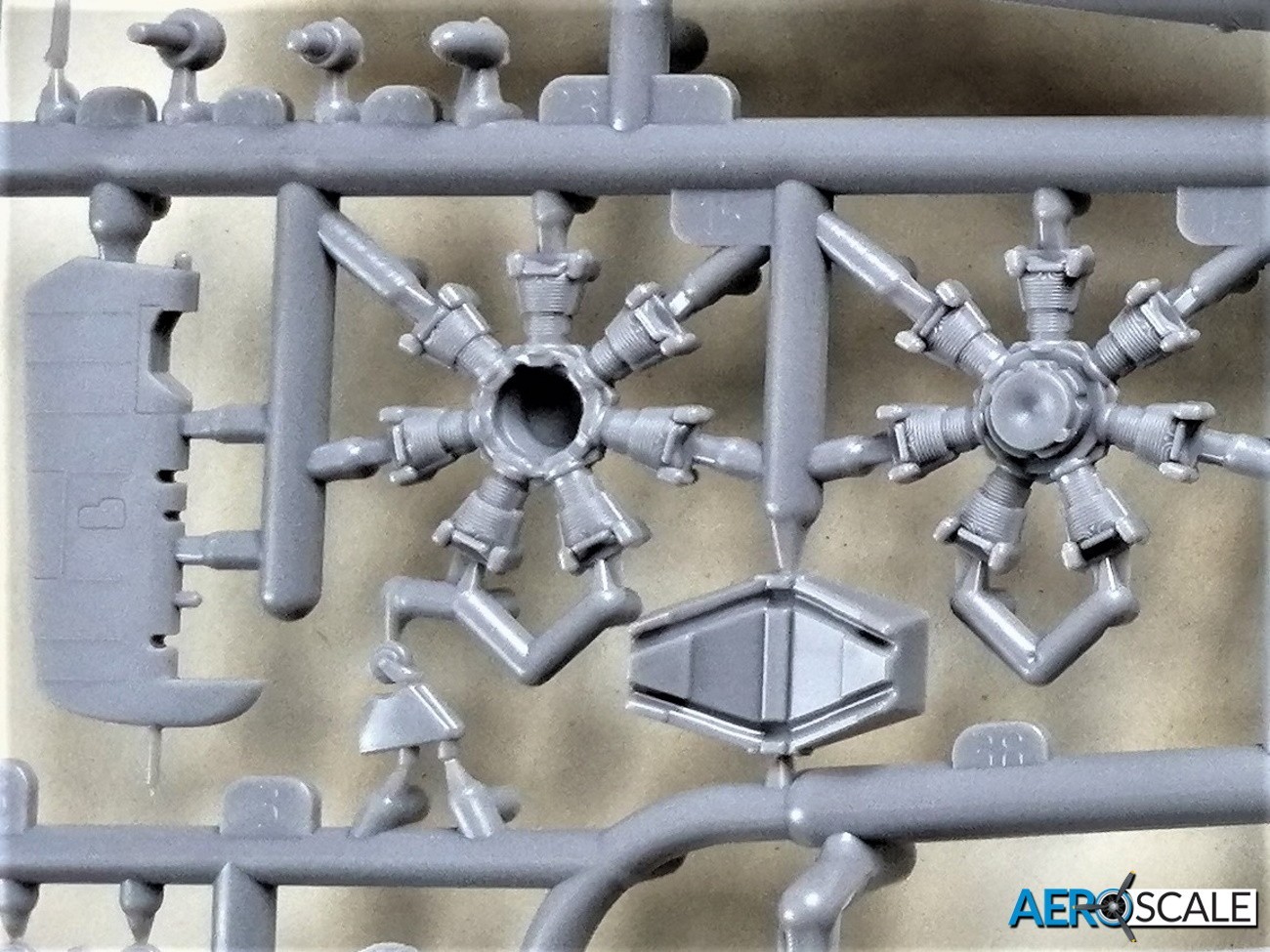 The engine bay is just packed with detail including twelve parts making up the P&W Twin Wasp and that’s not including the three-part engine mount. There is a PE enhancement in the way of an ignition harness. It’s the kind of attention to detail that would be found in1:48 or 1:32. There are two choices of cowling: the FAA Wildcat [option 6] cowling feature two cooling flaps while the other has eight cooling flaps as well as additional air intakes on the separate lip of the cowling. Also, the reduction gear casing looks slightly different depending whether you go for the FAA or US Navy and Marine options. 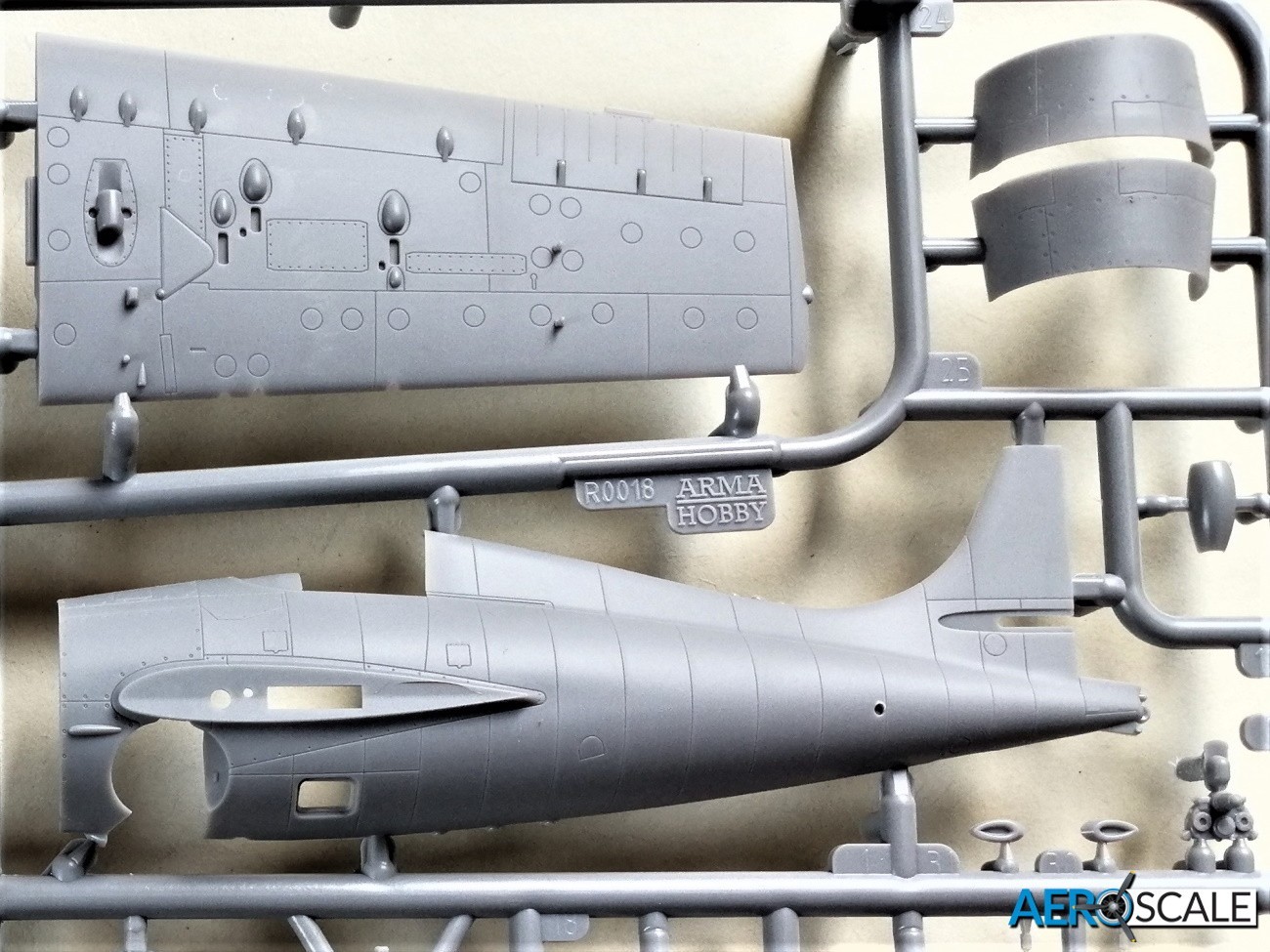 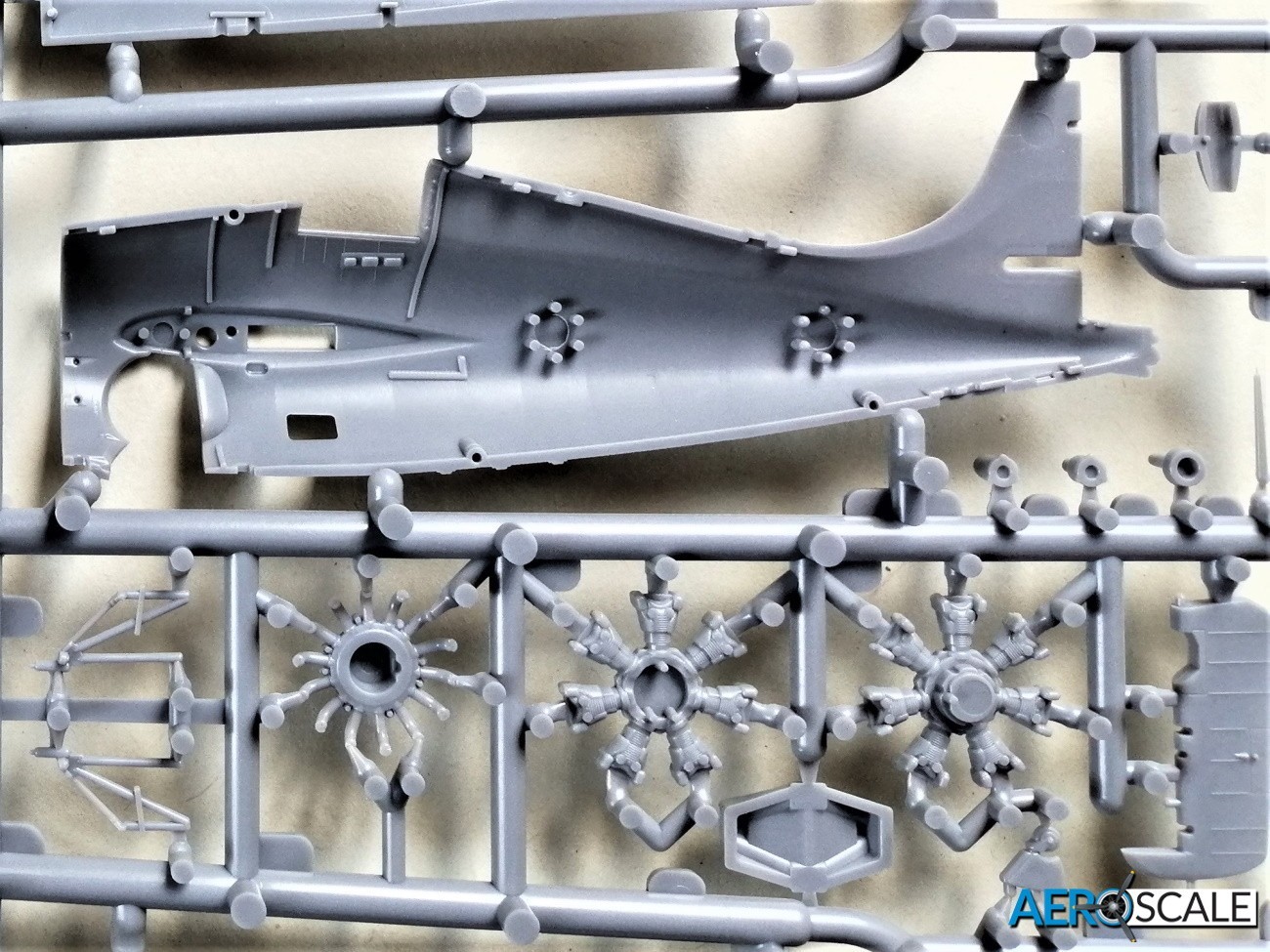 ARMA Hobby has captured the fuselage shape really well. The separate one-piece rudder has generous sized tabs to slot into the fin. The wings have beautifully thin trailing edges. A thoughtful touch are the pins on the under surfaces of the wings where the external fuel tank shackles are located. The horizontal tail has positionable one-piece elevators. 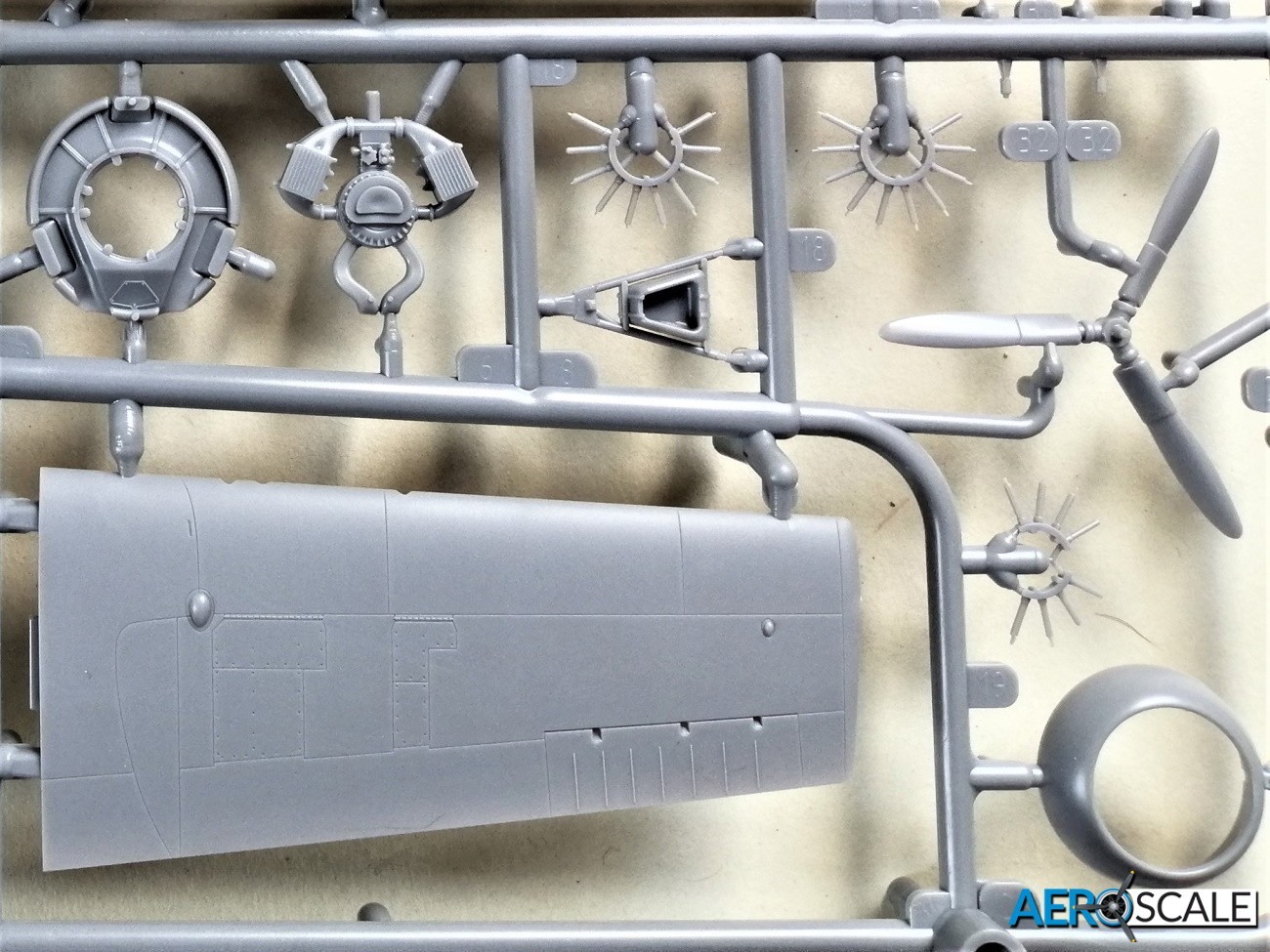 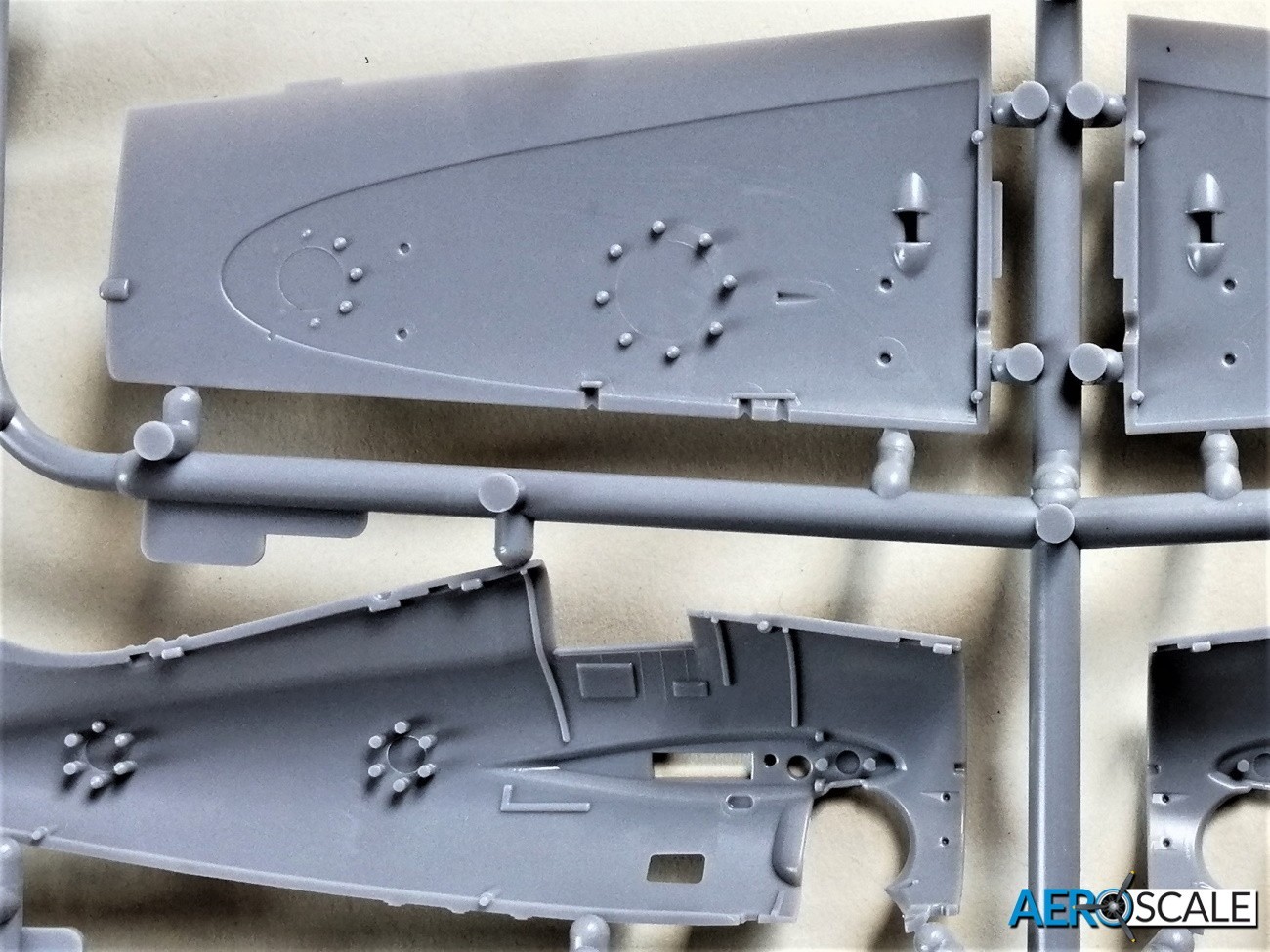 The clear parts are crystal clear, the canopy and windscreen are separate parts. The two small windows in the belly can be fitted towards the end of the build. There is a small sill in the recess to stop the clear panels being pushed right through. The canopy and wheel paint masks are not the usual Kabuki type, they have a more vinyl look to them. 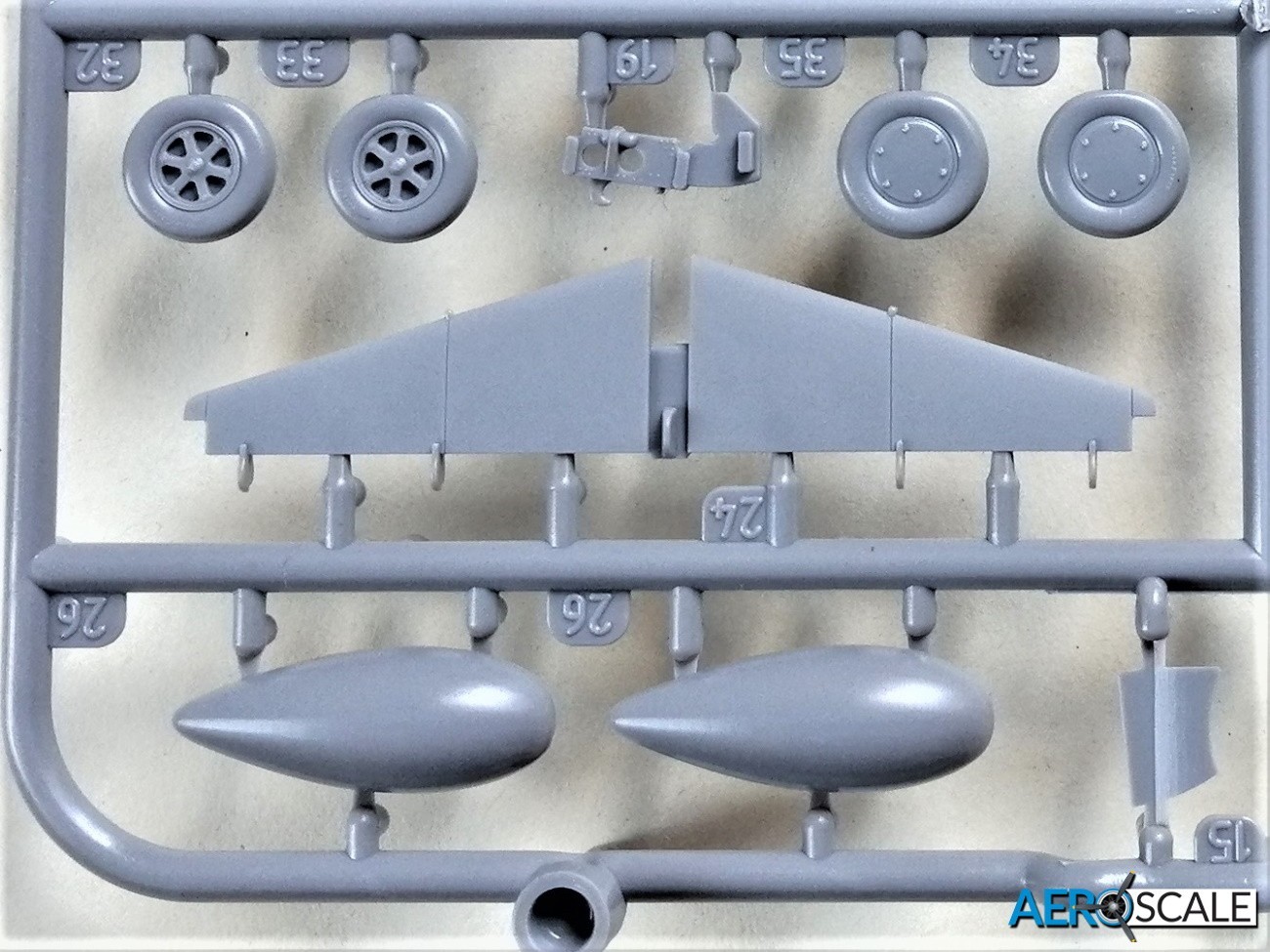 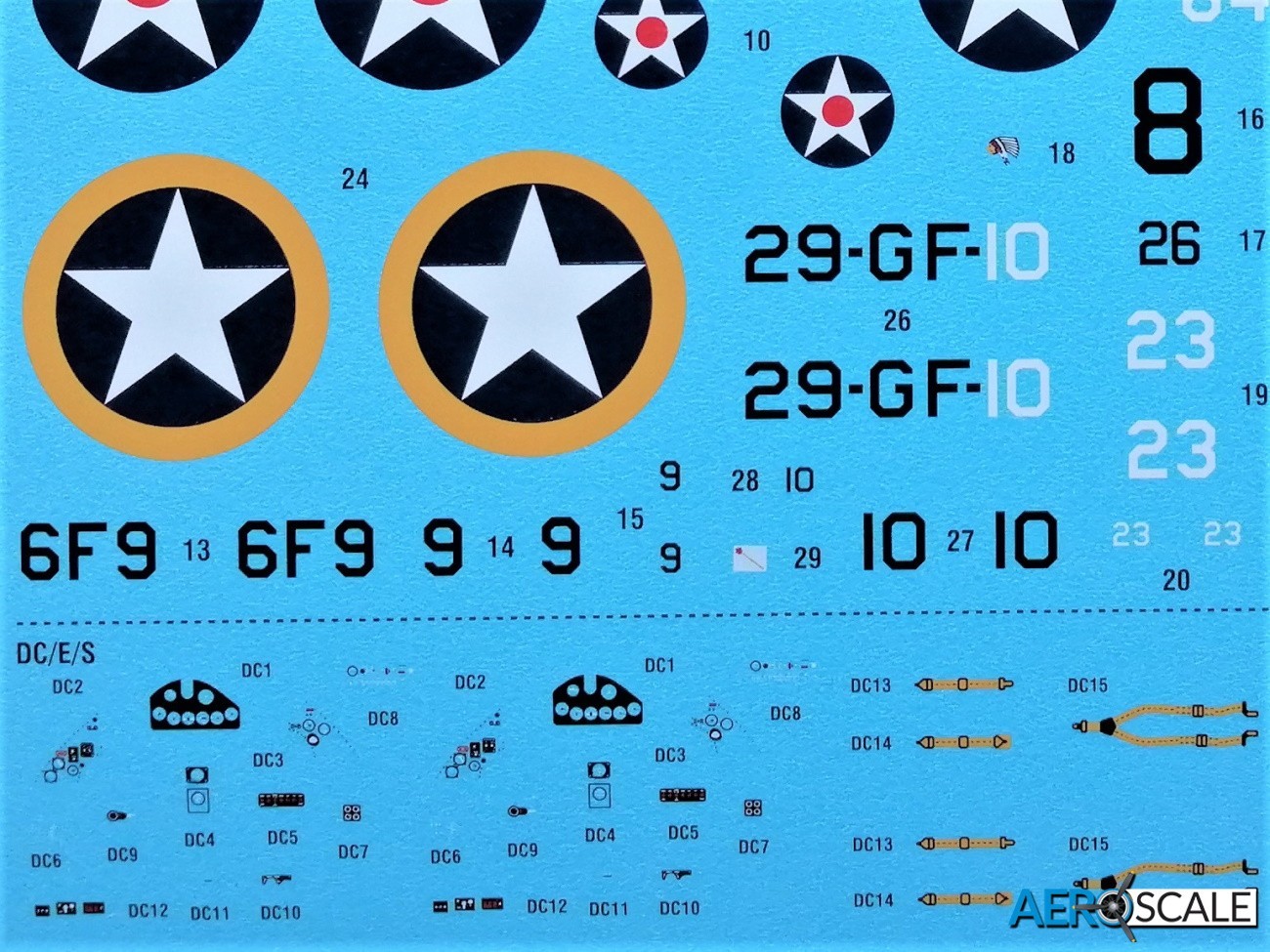 The decal sheet is printed by Techmod and looks comprehensive. As previously mentioned, there are IP and side panel instruments, placards and seat harnesses for the cockpit. Colour looks good and very glossy. Excess carrier film is kept to a minimum. 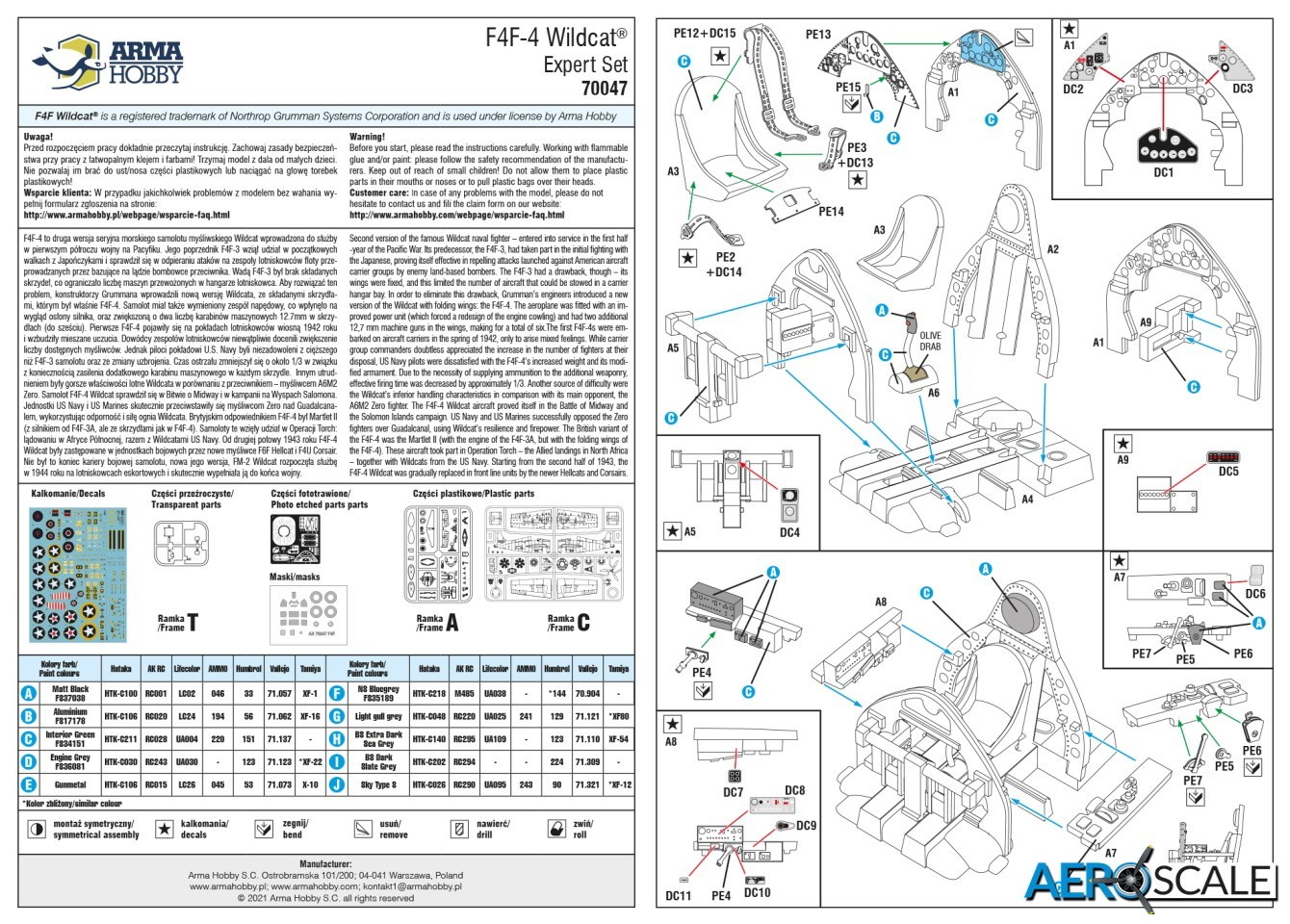 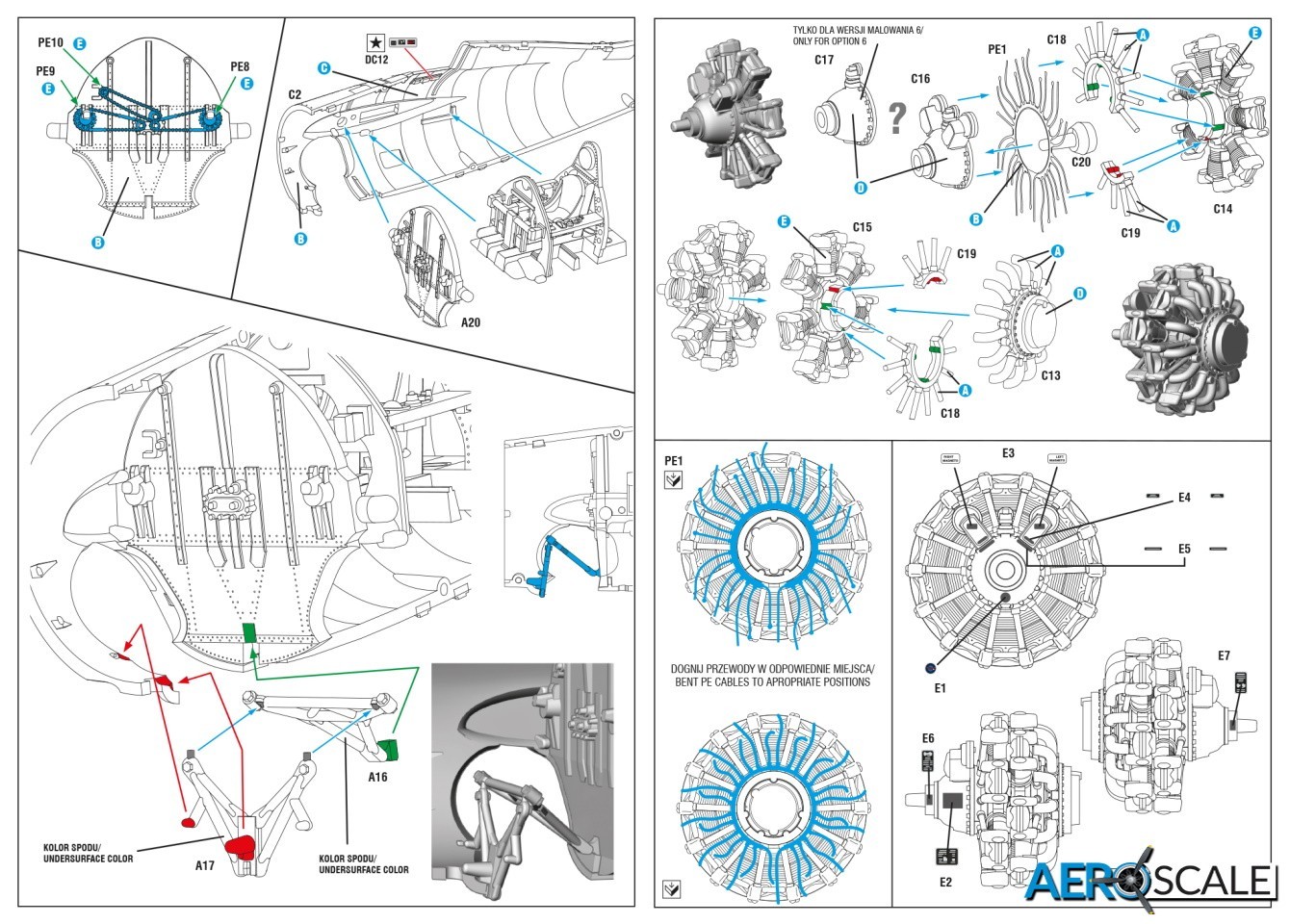 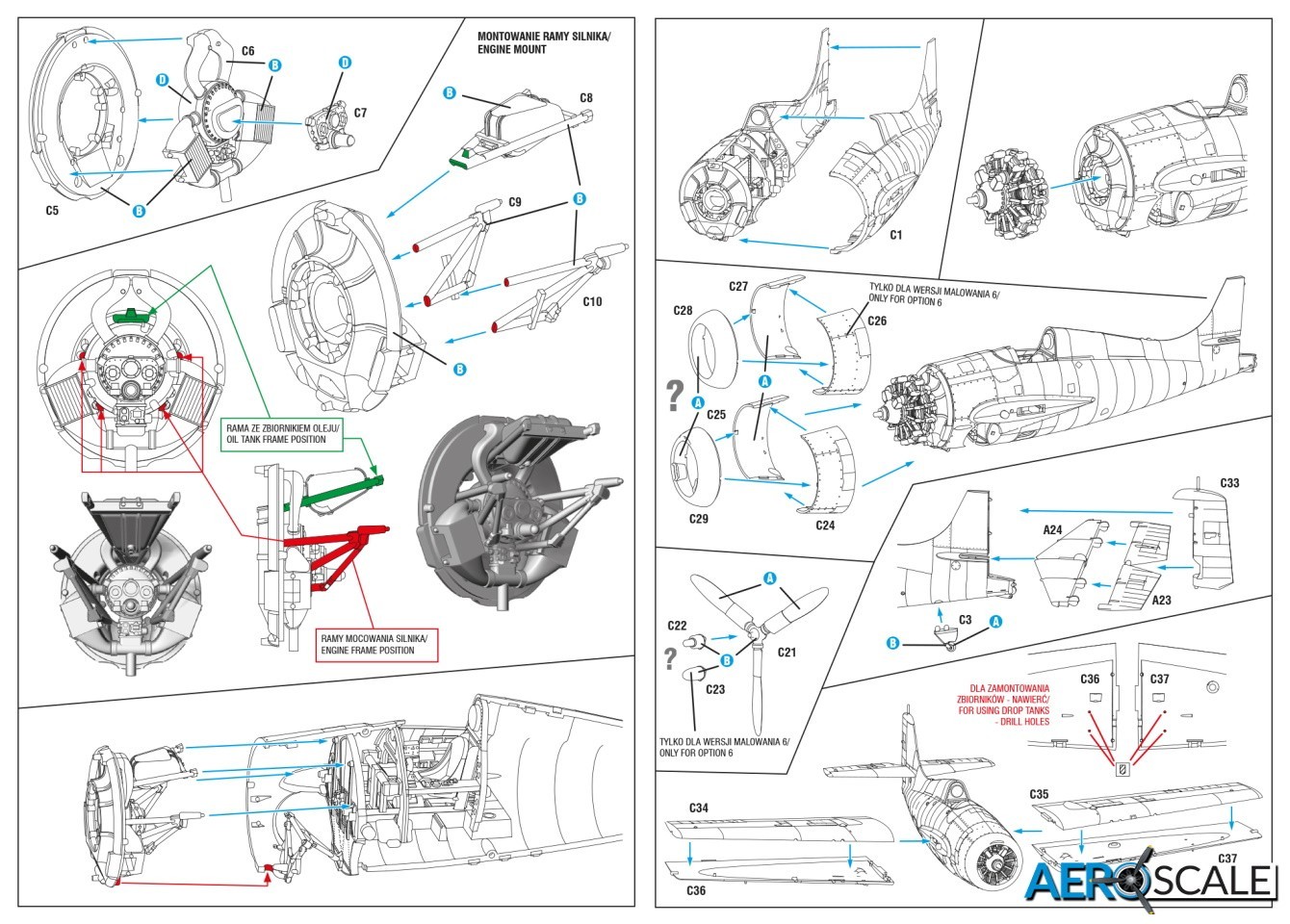 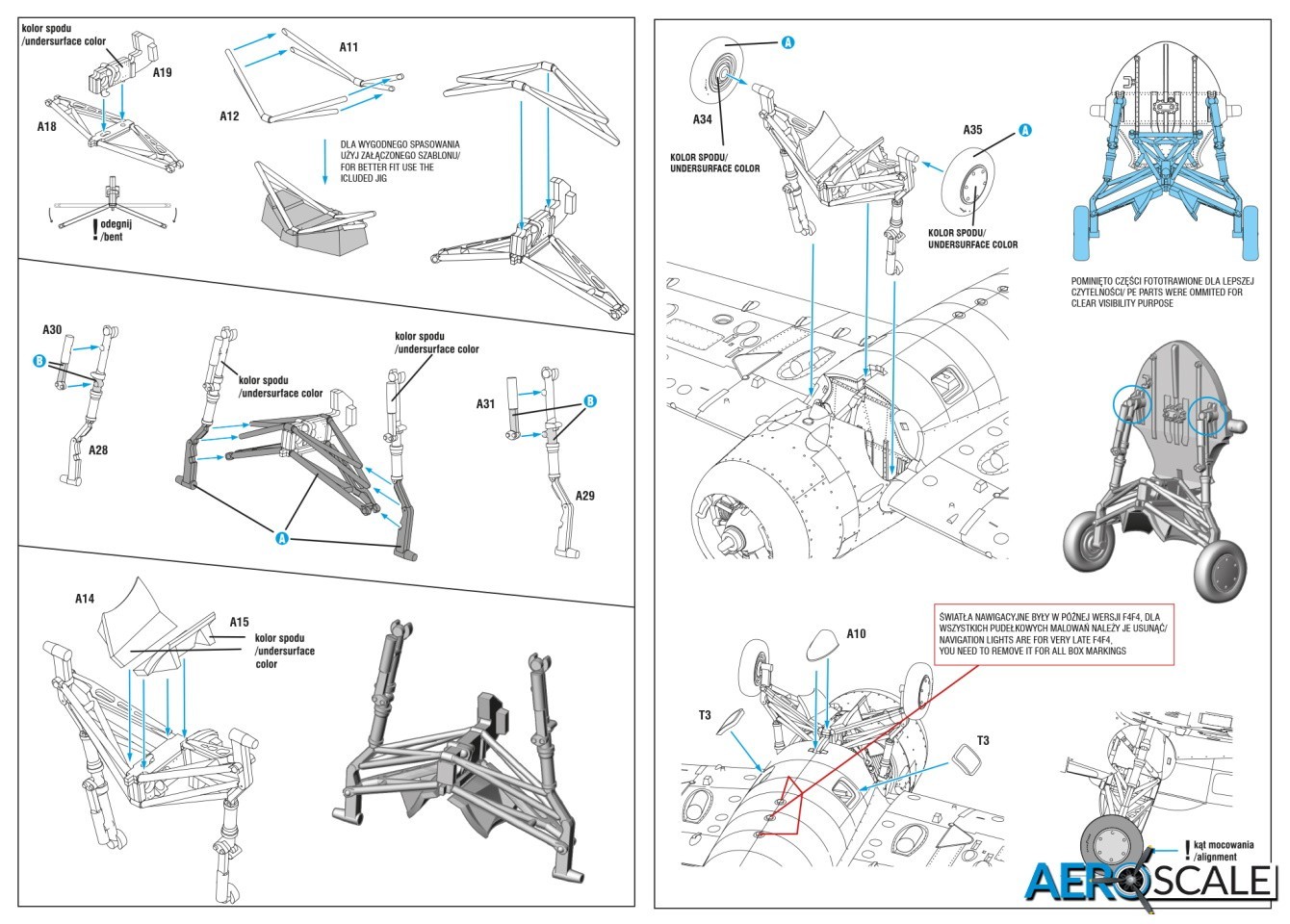 The sixteen-page A5 format instructions four profile full colour views of the six main marking options. Construction instructions are colour coded and a useful aid are the CAD images of the finished items: engine and undercarriage bays and the undercarriage itself. There are a number of paint manufactures referenced in the instructions including: Hataka, AK RC, Lifecolor, Ammo, Humbrol, Vallejo and Tamiya.

ARMA Hobby has also posted a useful guide to building this release from the designer of the kit Marcin Ciepierski: 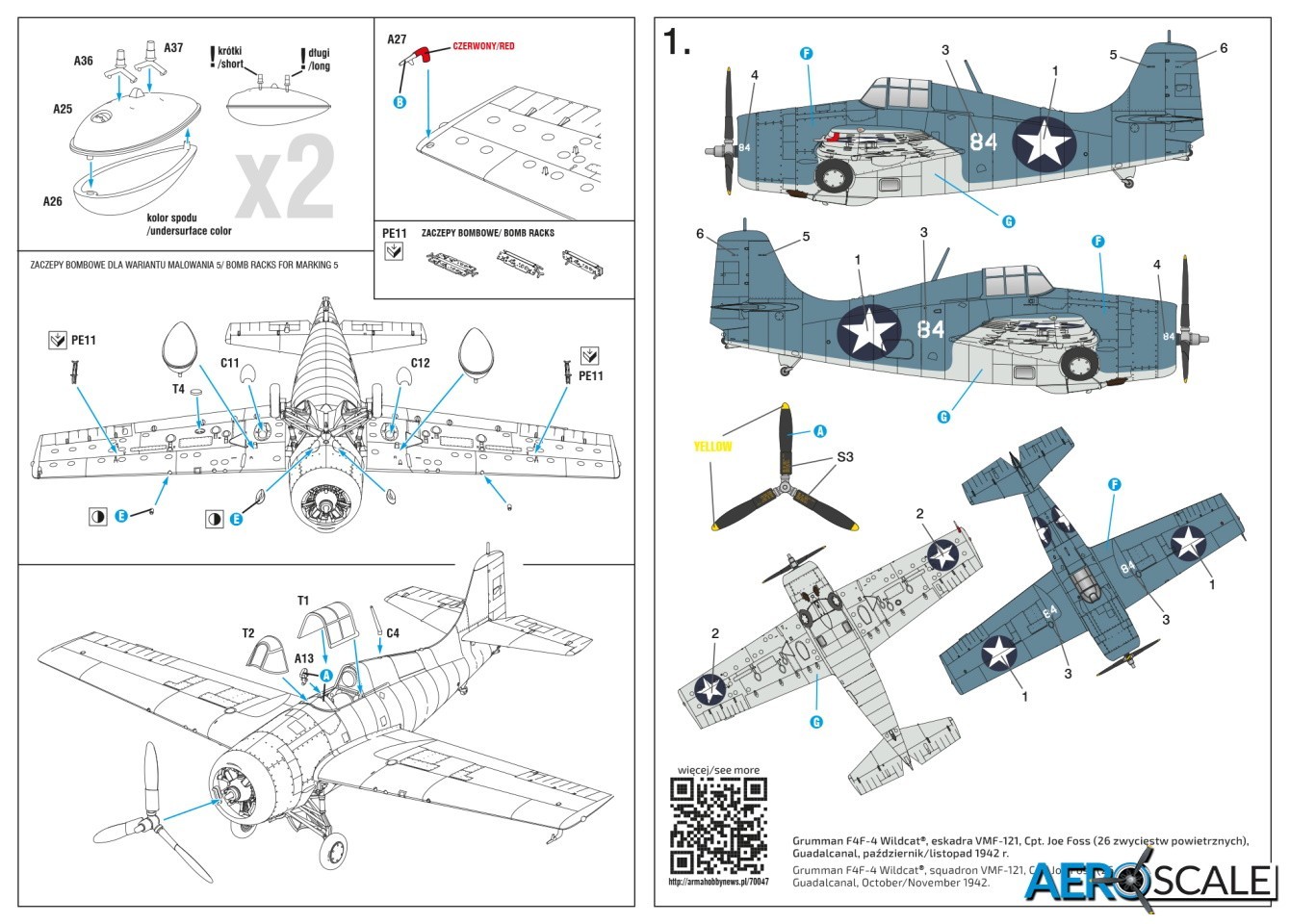 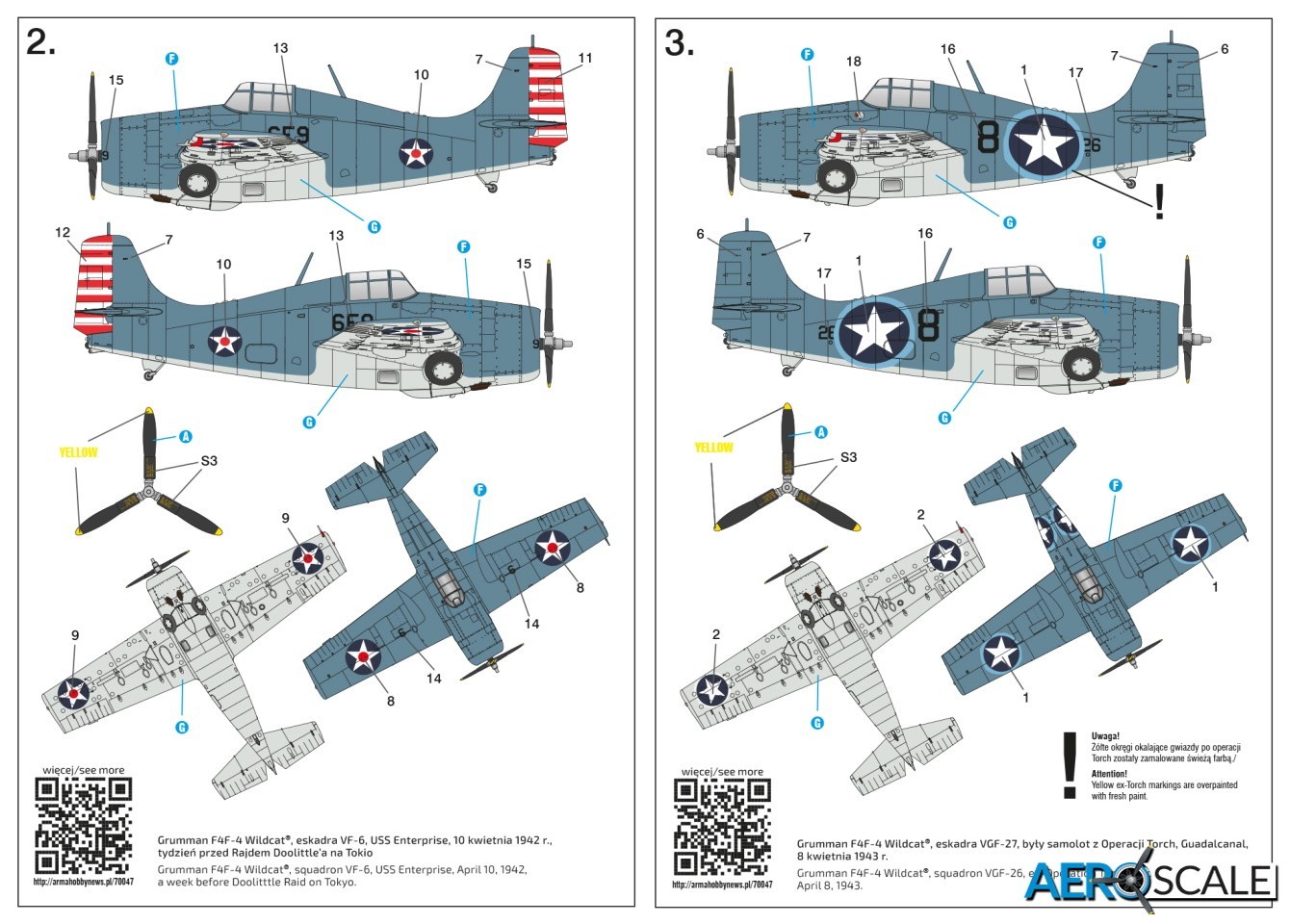 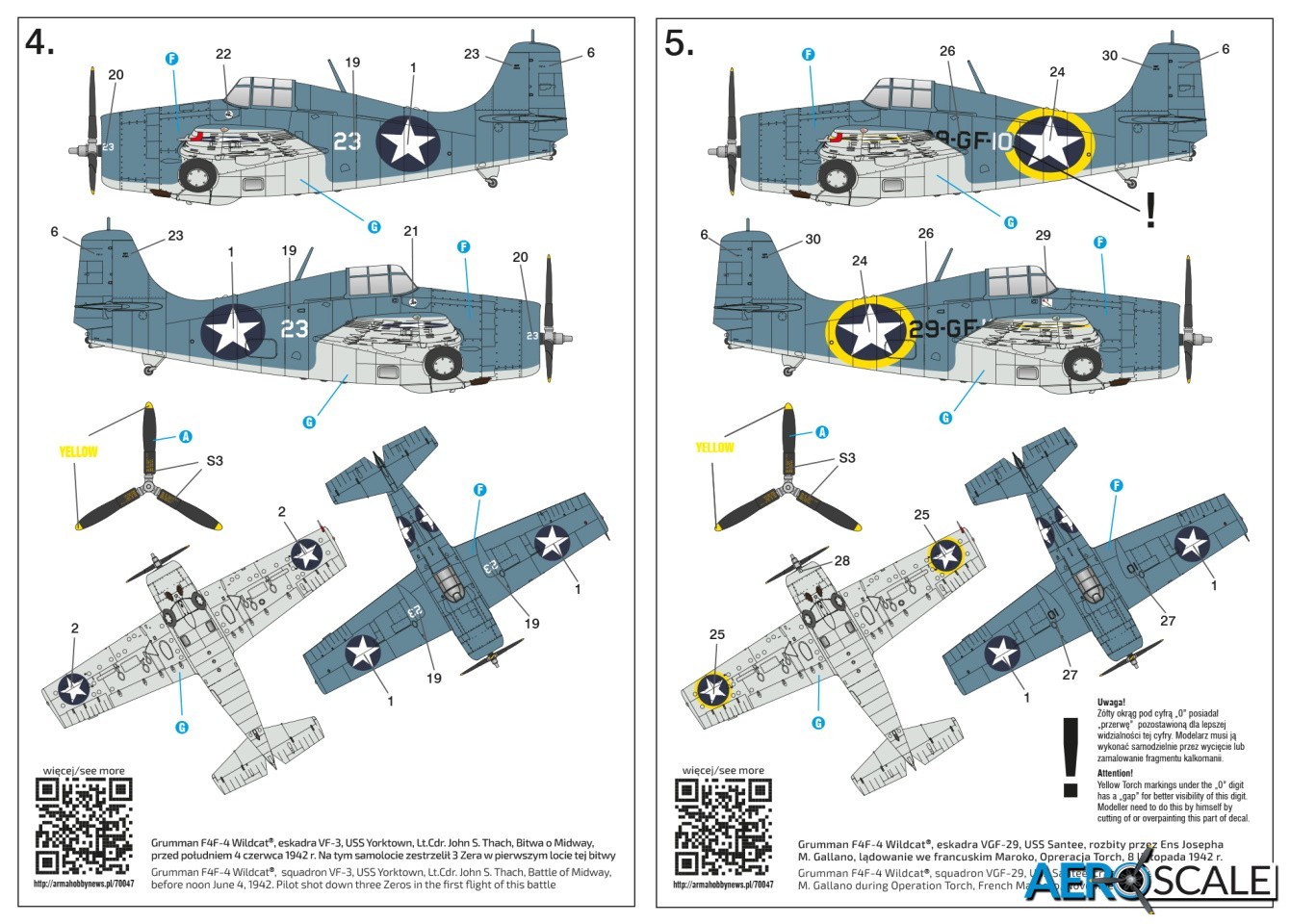 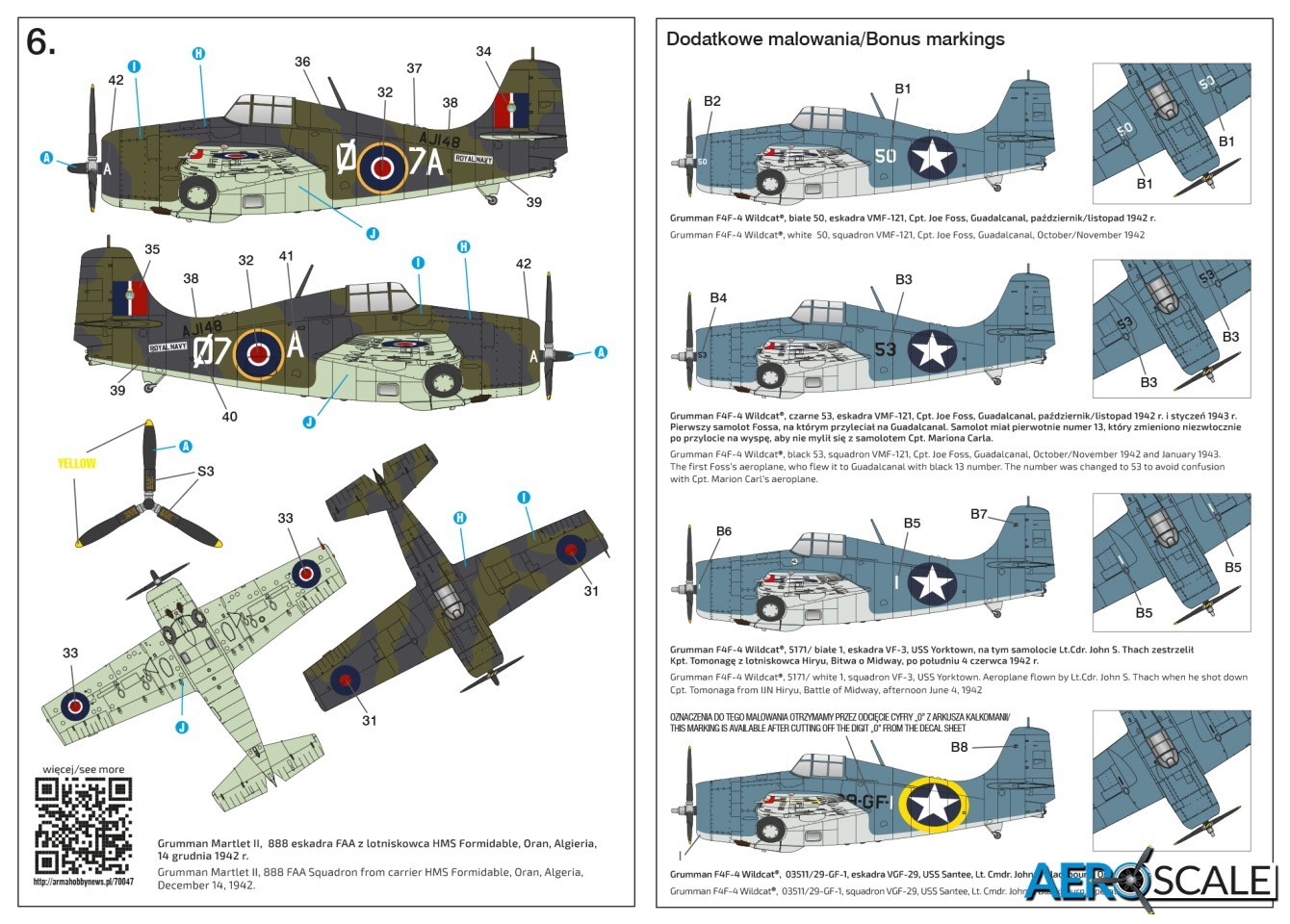 There are six marking options including US Navy, US Marine and a single British fleet Air Arm Wildcat or Martlet. As a bonus there are four more US Navy and Marine aircraft.

The amount of thought and care that ARMA Hobby’s has put into producing this 1:72 scale Wildcat is evident. It certainly raises the bar for other manufacturers to follow. Constant reference to the quality of the detail may be a bit repetitive, but never the less true. Included is a really interesting choice of marking options too. The price is very reasonable for a kit brimming with this much quality and one crying out to be built immediately. Very highly recommended.

Many thanks to ARMA Hobby for supplying this kit for review,