Robbo Roberts
Editor
posted on 1 year ago — updated on 1 year ago
1,104
views
Adie Roberts gets his second flight craft book from pen and sword this one is the Douglas DC-3 to see what was so good about this aircraft, see what information and detail the book contains for the modeller. 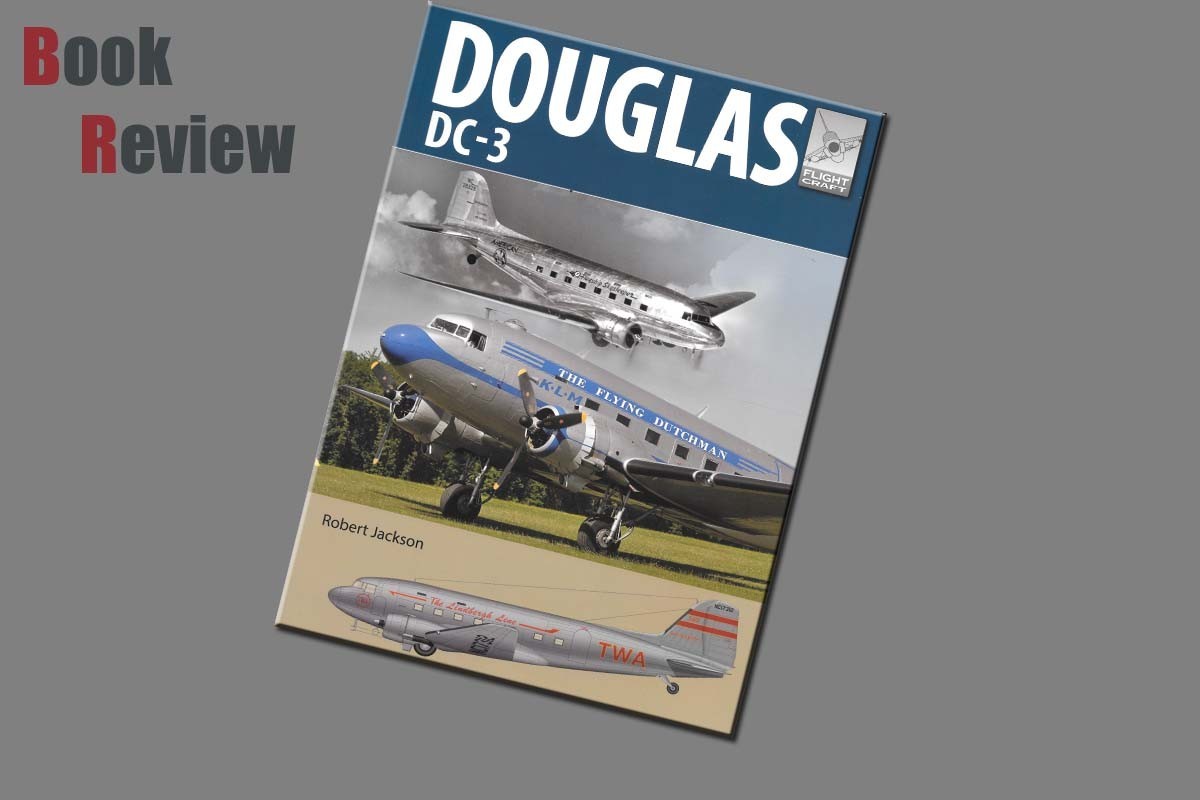 "DC" stands for "Douglas Commercial". The DC-3 was the culmination of a development effort that began after an inquiry from Transcontinental and Western Airlines (TWA) to Donald Douglas. TWA's rival in transcontinental air service, United Airlines, was starting service with the Boeing 247, and Boeing refused to sell any 247s to other airlines until United's order for 60 aircraft had been filled. TWA asked Douglas to design and build an aircraft that would allow TWA to compete with United. Douglas' design, the 1933 DC-1, was promising and led to the DC-2 in 1934. The DC-2 was a success, but there was room for improvement.

American Airlines inaugurated passenger service on June 26, 1936, with simultaneous flights from Newark, New Jersey, and Chicago, Illinois. Early U.S. airlines like American, United, TWA, Eastern, and Delta ordered over 400 DC-3s. These fleets paved the way for the modern American air travel industry, which eventually replaced trains as the favoured means of long-distance travel across the United States. A non-profit group, Flagship Detroit Foundation, continues to operate the only original American Airlines Flagship DC-3 with airshow and airport visits throughout the U.S.

During World War II, many civilian DC-3s were drafted for the war effort and more than 10,000 U.S. military versions of the DC-3 were built, under the designations C-47, C-53, R4D, and Dakota. Peak production was reached in 1944, with 4,853 being delivered. The armed forces of many countries used the DC-3 and its military variants for the transport of troops, cargo, and wounded. Licensed copies of the DC-3 were built in Japan as the Showa L2D (487aircraft), and in the Soviet Union as the Lisunov Li-2(4,937 aircraft).

After the war, thousands of cheap ex-military DC-3s became available for civilian use. Cubana de Aviación became the first Latin American airline to offer scheduled service to Miami when it started its first scheduled international service from Havanain 1945 with a DC-3. Cubana used DC-3s on some domestic routes well into the1960s.

The DC-3 in post-war years.

Author Robert Jackson was born in 1941, Robert Jackson was educated at Richmond School in Yorkshire. He is a full-time writer and lecturer on aviation, naval, military, and scientific topics, and was a defense and science correspondent for North of England newspapers. A former pilot and navigation instructor, he was a Squadron Leader in the RAF volunteer reserve. He is the author of thirty novels and Seventy non-fiction works.

This book from pen and sword is a softback book from their flight craft range it has a glued spine and pagination of 84.

In the United States, after the end of the 1914-18 war aviation military and civil alike had slipped into the doldrums, mainly because of a steadfast refusal by Congress, under President Coolidge, to budget any funds for its development. Neither was there much incentive to develop new types of aircraft, as the market was flooded with thousands of surplus military machines, most of them in mint condition and they were eventually sold off to anyone who wanted them at ridiculously cheap prices.

On the 31st of March 1931, a Fokker F 10 Trimotor off TWA crashed in Kansas during a thunderstorm after a wing collapsed, killing all eight on board. The accident caused great concern throughout the whole of the United States.

As a consequence of this accident, all commercial aircraft of wooden construction were subject to stringent and costly checks. All TWA trimotors were grounded, and later destroyed TWA found itself in desperate need of a new airliner and thus the Douglas DC-1, 2, and 3 came into being.

This offering from pen and sword on the Douglas DC-3, for me, is fantastic I have always felt that the DC-3 is an amazing airframe, as a child when playing war with my friends it would be either the DC-3 or Short Stirling bomber as my aircraft of choice.

The commercial aspect of the air service industry brings the Douglas DC-3 in detail explaining about the DC 2 even before it had become firmly and effectively embedded in commercial service in the US and Europe, a requirement had been identified for a more advanced high-capacity development that could generate profitable revenue from the carriage of passengers alone. One of the amazing facts that I found out about the DC- 3 was the ability to have sleeper berths on this particular aircraft, a picture from the book shows a stewardess serving breakfast to a female passenger. Within three years of its introduction, the DC-3 accounted for 95% of all commercial air traffic in the US.

At the pre-war peak, thirty foreign airlines operated the DC-3. On the Eve of war, the aircraft’s scheduled flights represented 90% of international air traffic. Civil DC-3 production ended in 1942 after 607 aircraft had been built, and with America now in the war, the Douglas production lines turned to the manufacturer of military versions, the C- 47 Sky train, and the US navy's R4D. More than 10,000 were built and were used by the armed forces of many countries, the RAF and Commonwealth Air Force naming the type Dakota. Including the versions built in the USSR and Japan, production rose to over 16,000.

The first Dakota to experience enemy action was a DC-2 operated by CNAC, which were operating fast Mail and passenger services between some 20 Chinese cities when the Sino - Japanese war erupted in 1937. Showing just how tough the DC-2 was, a flight with 14 passengers onboard piloted by an American Hugh Woods, only a few minutes after take-off from Hong Kong, 8 Japanese fighters pounced on the plane strafing along the fuselage, the Japanese fighters killed nine of his passengers and, severely damaged, Woods dived through the cloud and ditched the aircraft in a river. The Japanese continued to strafe the aircraft as it floated and there were only three survivors, including the pilot. The aircraft was salvaged from the River and repaired.

The Douglas airframes saw action in most of the theatres of war during World War Two, particularly in the D-day landings.

Another outstanding wartime story of the Dakota's and one pilot in particular Ken Cranfield born in Ealing London in May 1922, he enlisted in the RAF in February 1941 and trained as a pilot in the USA. Ken flew his Dakota on many dangerous missions supporting the invasion of Normandy on the 5th and 6th of June 1944. During Operation Market Garden the famous airborne operation to capture a series of bridges in the Netherlands, especially the bridge at Arnhem.

Beginning on the 17th of September 1944, Warrant Officer Cranefield was the captain of 22 Dakotas of 233 squadrons that toed Horsa Gliders, carrying soldiers, to Arnhem. As the situation at Arnhem deteriorated, the resupply of the 1st airborne division's beleaguered positions became critical. on the morning of the 23rd of September, 233 squadrons were tasked with dropping more supplies into the heavily defended area with 17 Dakotas. Cranefield was the captain of one of them on approaching the drop zone the Dakotas met with heavy anti-aircraft fire Ken later recalled it sounded like peanuts raking the length of the fuselage.

His aircraft was struck by a high explosive shell that made a large hole in the starboard wing setting it on fire and tearing away part of the aileron. Although the Dakota was difficult to control, he continued onwards towards the DZ. The Dak was hit again and Cranefield was gravely wounded in the knee and thigh, refusing treatment he remained at the controls until the paniers were dropped successfully. Only then did he allow the co-pilot to take control and fly the aircraft back to base. He was awarded the distinguished flying cross for his actions. only the shear strength of the Dakota and the determined aircrew managed to bring it back home thus showing the strength of the aircrew and remarkable aircraft.

As with all the Flightcraft books, they are full of photographs and profile pictures of the DC-3 the book continues onto the Douglas DC3 after the war and its continuing service with various airliners and plenty of these wonderful aircraft still fly to this day. They have a section for the modeler I am incredibly pleased to say that in this particular book it is quite a large section, this, of course, could be due to the fact that the DC-3, C- 47, or Dakota are a very popular model for modelers to build. A very large amount of model manufacturers does include the DC-3 in their model list, these include such companies as Airfix, Esci, Italeri, Minicraft, Roden, and Trumpeter to name but a few these include all popular scales from 1/144th scale to 1/48th. The amount of aftermarket products is a huge list that includes resin, engines, photoetch, weighted wheels, decals, etc.

There are several very good builds of the different model Dakotas in this wonderful book so should make for a good reference book for any budding modeler.

I am not going to lie to you I am a massive fan of the Douglas DC3 and especially its military variants so for me this book really is a must. Putting my review head back on I have found this book from pen and sword to carry a lot of information on this particular subject. It is very well written with some very detailed photographs, some amazing modeling that ticks all the right boxes I just wished that all of their series of modeling books would have as much if not more of a modeling section as this book. 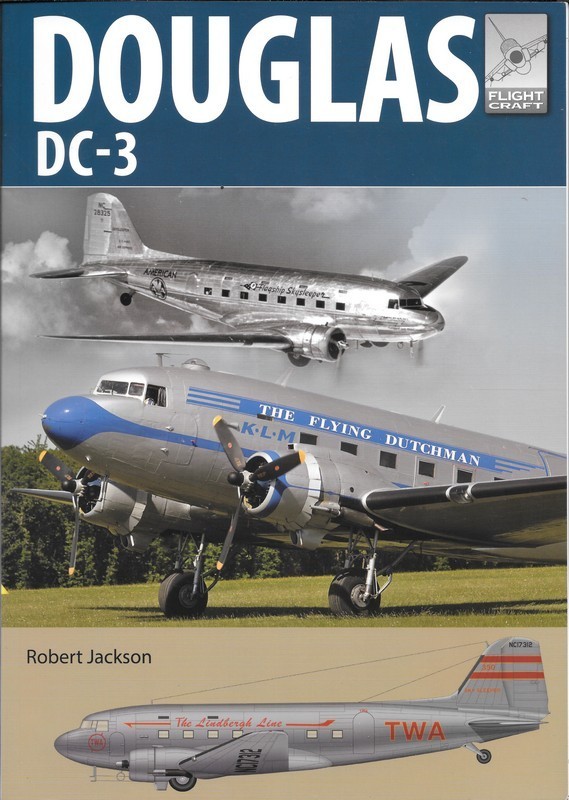 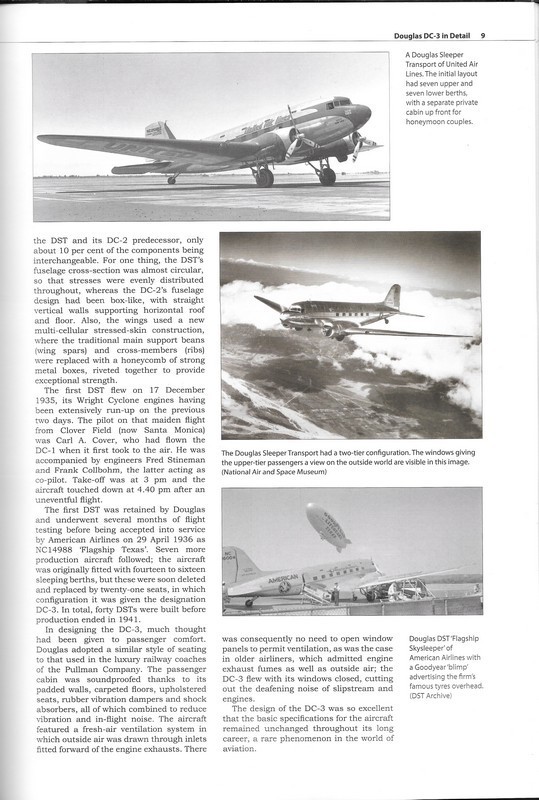 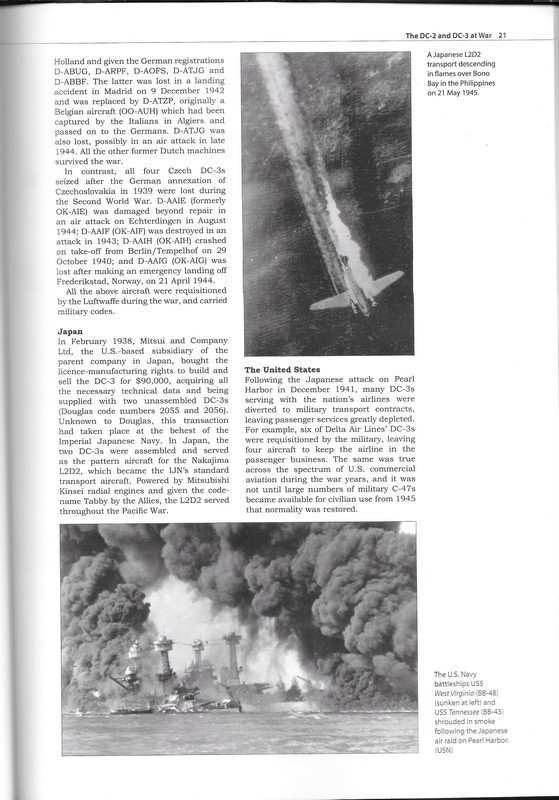 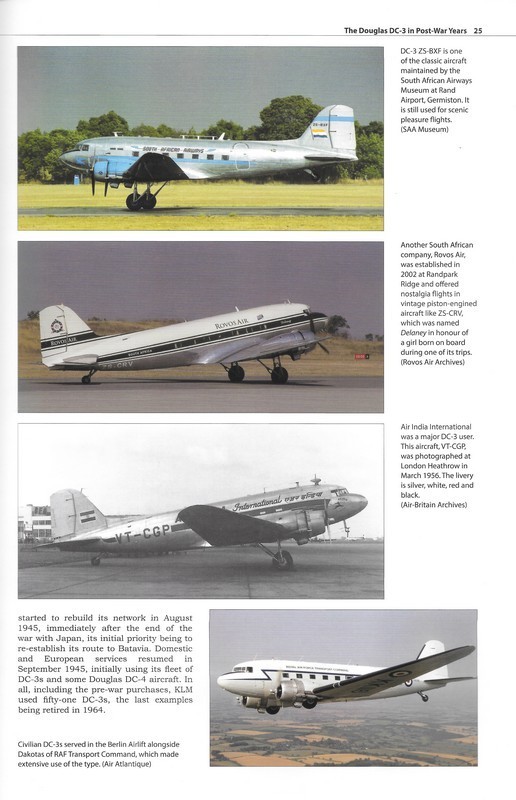 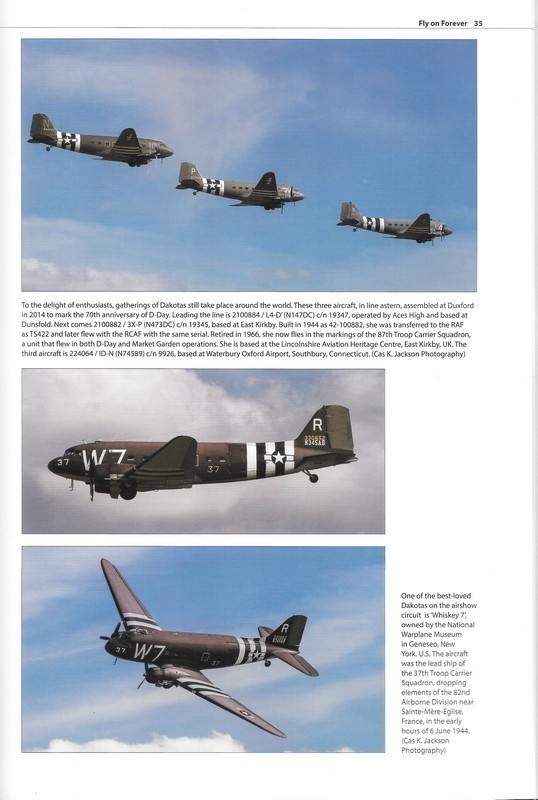 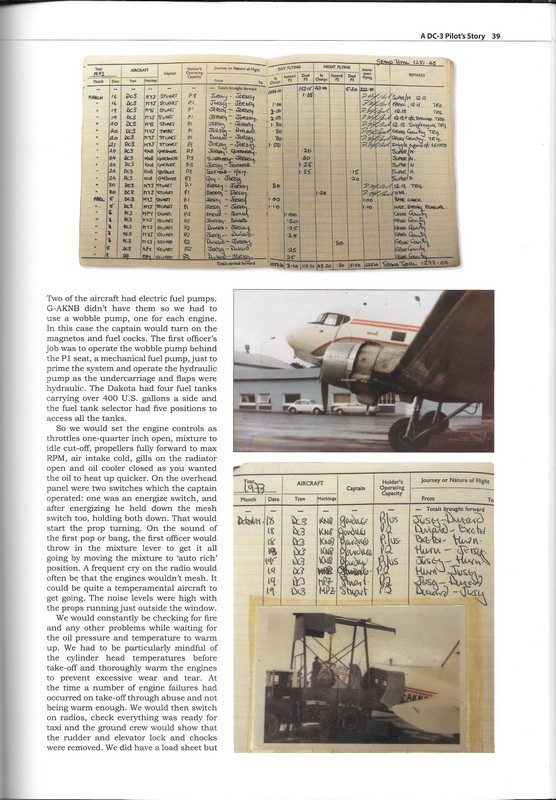 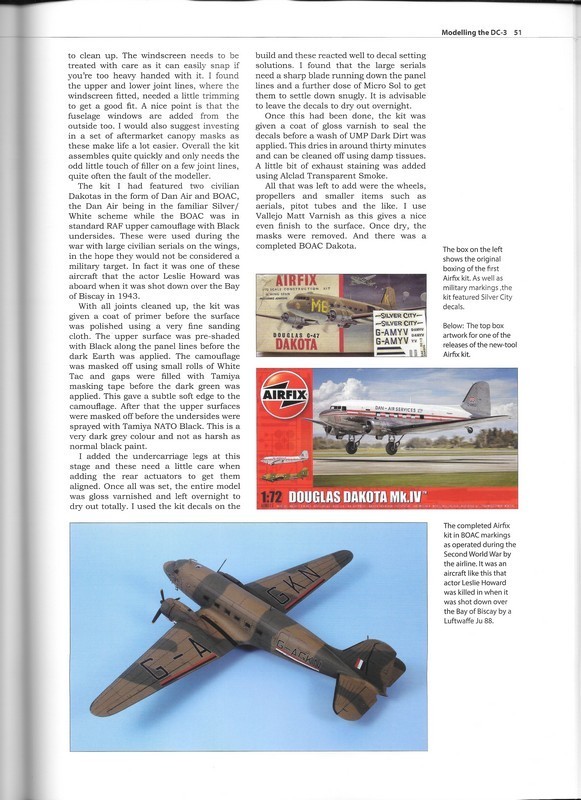 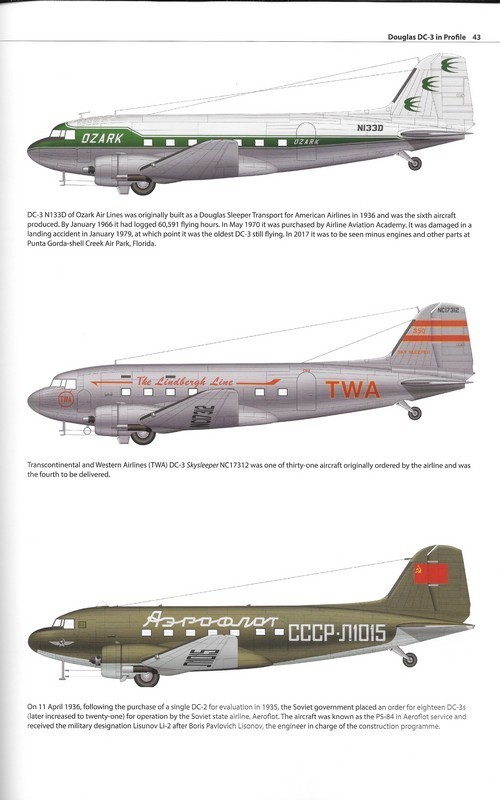 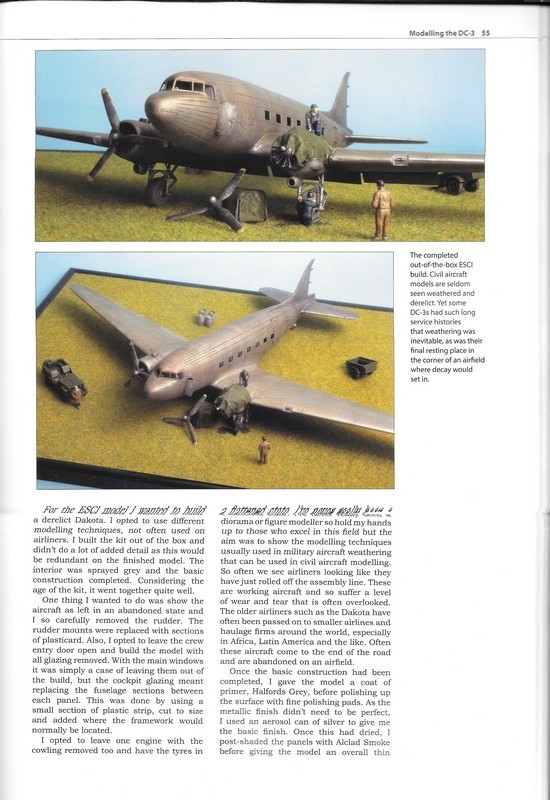 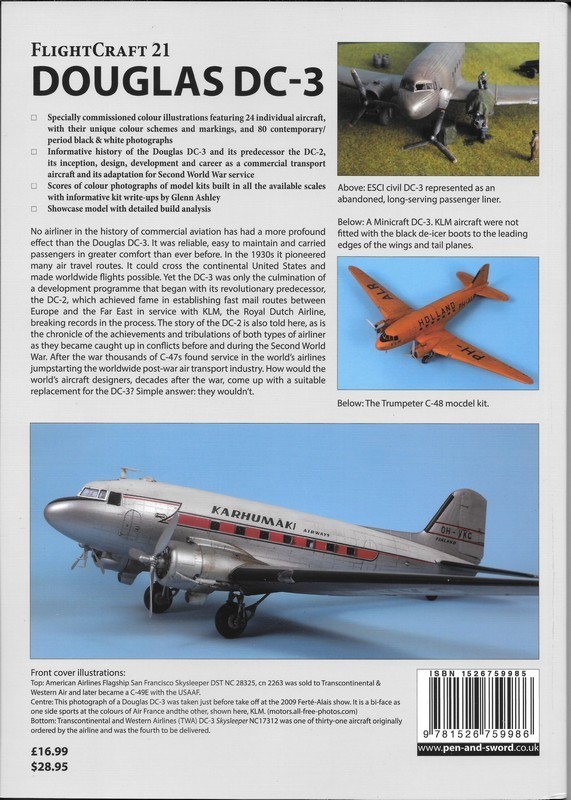