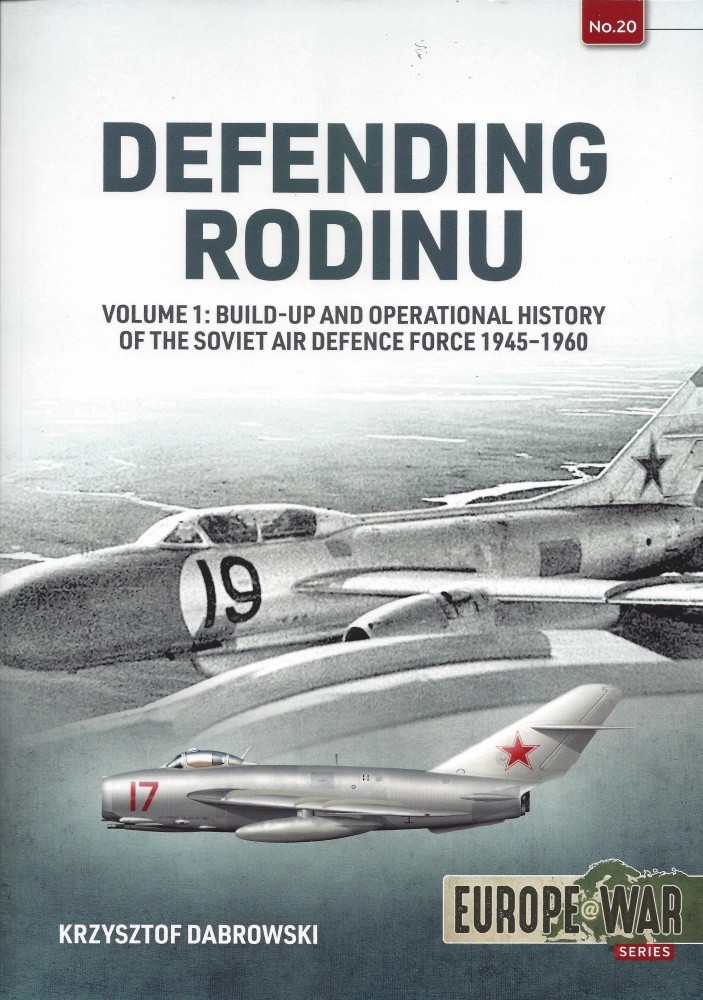 Defending Rodinu, Volume 1: Build-Up and Operational History of the Soviet Air Defence Force 1945-1960 by Helion and Company is their twentieth title of their series Europe @ War.

Casemate Publishing provided this copy for review and you can find it on their site at Defending Rodinu, Vol. 1

Why do you build the models and read the histories which you do?  While that is a causal “chicken or the egg” question, I develop interests for some models from histories, and seek histories because of some models I’ve built.  I find subjects like Defending Rodinu to fill both reasons.  This book is particularly interesting to me because my path to USAF included contemplating how to penetrate the Soviet Air Defence Force (PVO).  There were many uncertainties and I remember a couple of stories by pilots who may or may not have had first-hand experience against the PVO.   By the time I started learning of the subjects in this book, many were in their twilight or retired but they were the ones I grew up worrying about.  Thus, I received this book containing post-Cold War revelations with hopes of learning facts of the past.  The publisher describes this book thusly:

Volume 1 of Defending Rodinu examines the development of the Soviet air defense forces from the immediate aftermath of the Second World War up until 1960. It looks at the development of dedicated interceptor aircraft, surface-to-air missiles and the radar network needed to support these, along with a detailed history of the attempts, successful and otherwise, to intercept and destroy Western aerial intruders.

Modelers and historians of post-war/Cold War soviet aircraft and missile systems should find this an interesting subject.

Defending Rodinu, Volume1 is told through 80 pages with 21 chapters and sections:

10. Overflights Continue and the U-2 Enters the Game

Throughout this book organization and technical terms are presented both in Russian and with their English translations, i.e., Radiotekhnicheskiye Voyska (‘radio-technical’), as are equipment designations and ASCC/NATO codenames, i.e., P-20 radar ‘Bar Lock.’  For simplicity, I will refer to the associated Soviet air defense organizations as PVO: protivovozzdushnaya oborona (‘air defense’).  Beyond the factual and technical, the author occasionally includes editorial comments, i.e., the travesty of keeping the fate of crewmen secret from their families for decades.   The author includes amazing information, e.g., the soviets adopted a British paint standard and colors to camouflage aircraft.

Birth of the Post-war Soviet Air Defence Force and the following two chapters recount the early problems the Soviet Union (USSR) had keeping Western aircraft out of their sky, resulting in the reorganization order of 14 June 1954.  Bureaucratic organization of the Soviet air defenses is explained.  We are treated to Soviet experimentation and development of surface-to-air missiles (SAM), their transitions from propeller-driven fighters to jets and guns to air-to-air missiles (AAM).  I am especially surprised by the revelation of a huge Soviet heavy anti-aircraft gun.  The author discusses Soviet weapons and contrasts them with Western weapons.  Detection and guidance systems including data links, and system, are covered as well.

Starting with The Game is On, the majority of the text covers Western and neutral country intelligence gathering around – and over – the USSR.  With the fall of the USSR, many archives were opened and revealed the results of many clashes.  There are still some events that are mysteries, and the author discusses whether or not he found any clues, or if some facts are probably lost to history.  One poignant story chronicles a shoot-down over international waters; denied for years by USSR until confirmed by Khrushchev, he and the Western Prime Minister agreed to keep the event secret, the truth not publicly announced until the fall of the USSR.  These chapters explore the years of successes and failures of the PVO efforts to protect Soviet airspace from prying eyes and sensors of Western intelligence agencies.  Specific soviet pilots involved in events are often identified, including some of their testimonies after fall of the USSR.

Western aircraft are documented, frequently with serial numbers, unit markings.  Crews are identified and what is known of those shot down is revealed.  Specific operations are identified, and some anecdotes are related, i.e., upon return to base from a covert mission with cannon damage, a crew chief remarked to the pilot about the size of the bird the aircraft hit.  Cases of PVO fratricide are also explored.

Special operations are recounted in good detail, and several surprised me.  One in particular involved deep penetrations into the soviet hinterlands with aircraft provided by one country, crewed by allied crews and bearing their national insignias.

Geopolitical situations are explored, such as the soviet rejection of Eisenhower’s Open Sky treaty proposal, and how that lead to further Western willingness to conduct overflights.

And then came the U-2.   The U-2 provided the hardware that led to one of the tensest situations of the Cold War.  U-2 flights are covered in good detail, including Red failures to stop them, close calls, fallout from the missions, and the watershed event that ended U-2 missions.  The End of an Era and The PVO Learns to Walk reviews and summarizes the events recounted in the book, and the fruits of the soviet learning curve.

I was hoping to find an account of a story I was told long ago by a pilot of this era of the Cold War - a story about a RAF Canberra scoring multiple MiG kills on a single mission: the Canberra would penetrate soviet airspace, PVO would scramble, RAF turned back for Iran, and PVO fighters returned to base; then the Russians shot down a Western aircraft and a RAF crew plotted revenge.  On their next mission they took off and penetrated soviet airspace as planned, triggering a PVO scramble.  As usual the RAF turned back for Iran and PVO turned back to base.  Then the Canberra crew turned around towards Russia and pushed the throttles forward.  The fuel-depleted MiGs were ordered to turn around and intercept, and when they got close, the Canberra turned and raced for the border.  The RAF crew landed safe and sound but the short-legged MiGs ran out of gas and became gliders.  A good story but apparently not true enough to be included in this book.

I find this book to be well organized, well detailed, engaging, and fairly easy to read.  I think it will pique the interest of early Cold War aviation modelers and provide source material for them.

A gallery of pertinent and informative photographs support the text.  Most are of aircraft and other air defense hardware.  Many photos of soviet or Western crews support specific topics. Image quality varies from heavily retouched grainy soviet examples to professional portraits, but each image illustrates the subject at hand.  Several are taken from soviet military manuals.  Several fascinating photos include:

·       MiG-19 in tight formation with an reconnaissance aircraft

Original artwork by Tom Cooper including aircraft in profile:

1.     Map of Europe 1945-1992: Iceland to the Ural Mountains to the western Caspian Sea across North Africa to include Portugal.

5.     S-25 SAM-system: organization and composition of the S-25 SAM system which defended Moscow. 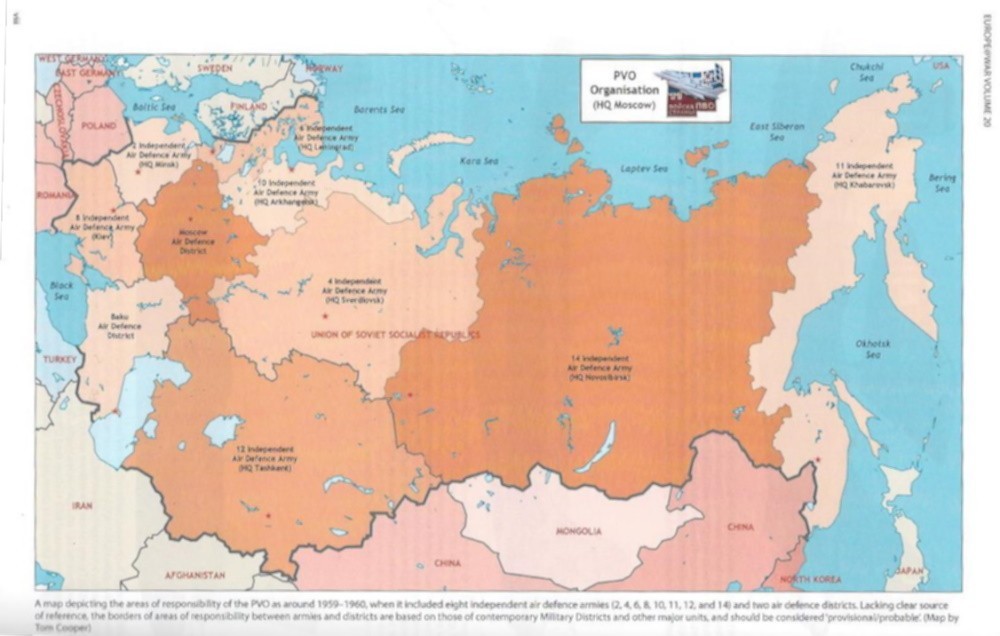 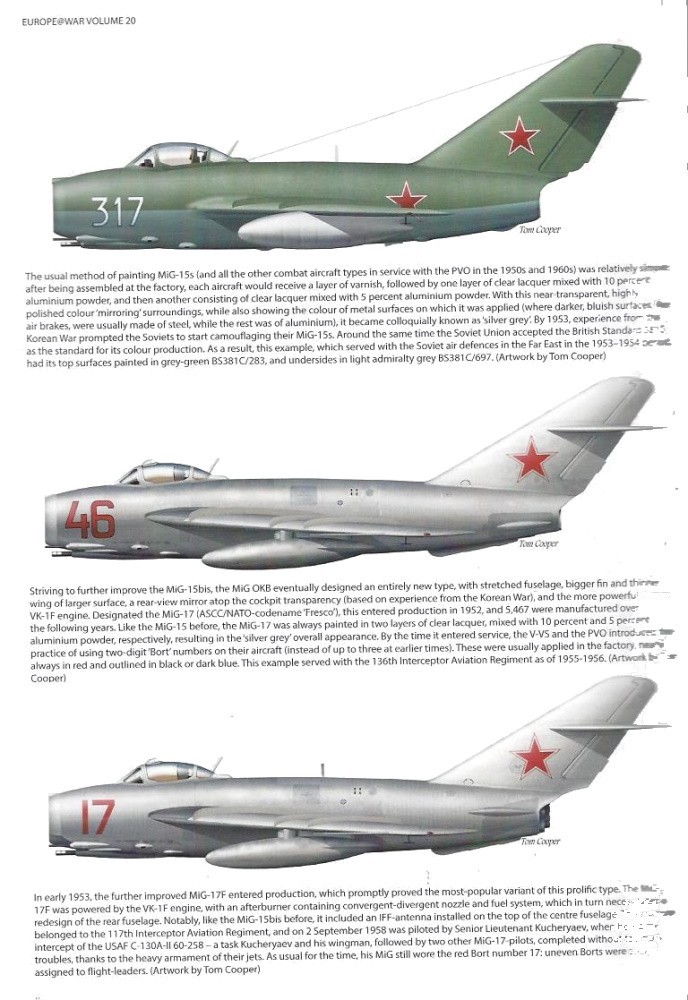 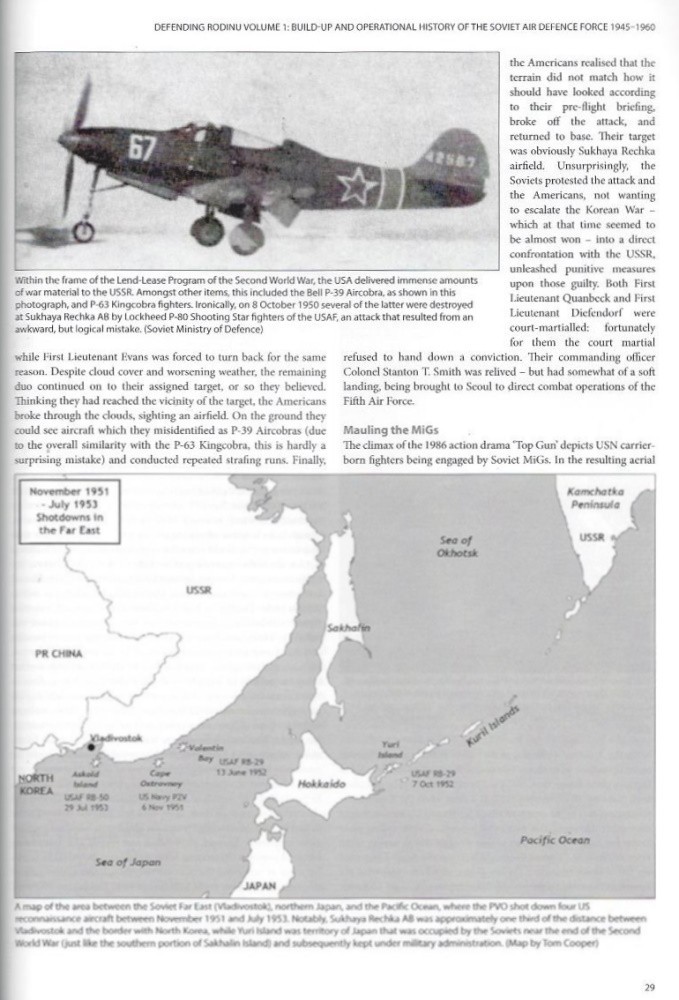 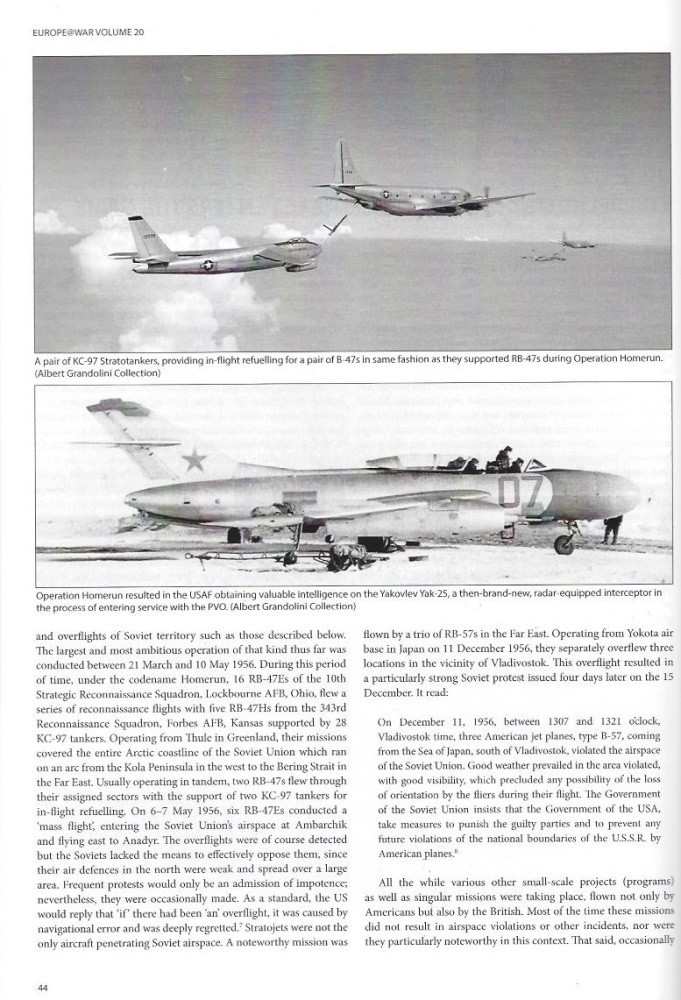 I am not disappointed by Defending Rodinu Volume 1: Build-Up and Operational History of the Soviet Air Defence Force 1945-1960.  Helion and Company provides a detailed primer which presents the organization, equipping, and combat history of the early Cold War PVO.  Accounts of soviet attempts – and successes – to intercept western aircraft  are illuminating.  The gallery of photographs and artwork with informative captions enhances the text.

Mr. Dabrowski has created a detailed and informative account of soviet attempts to deny Western intelligence gathering of the USSR. Many of the stories are poignant and a few are exasperating.  I have a better understanding of this chapter of the Cold War and recommend this book to others with this interest.

Thanks to Casemate for sending this book.  Please remember to mention to vendors and retailers that you saw this product here - on AEROSCALE.