JPTRR
Editor
posted on 3 months ago — updated on 3 months ago
507
views
Bf 109D/E BLITZKRIEG 1939-40 is the third title in OSPREY's new series DOGFIGHT.  It examines the development, use, tactics and effectiveness of Messerschmitt's iconic fighter - and key pilots - from the Kondor Legion of the Spanish Civil War, through the Battle of France. 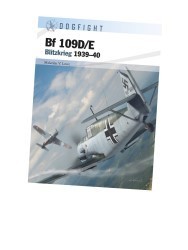 Bf 109D/E is the standard Dogfight format of 80 pages, catalogued with Osprey's Short code: DOG 3; this review is of the paperback, catalogued with ISBN 978147285031.  It is available in ePUB and PDF with different ISBNs. Malcolm V. Lowe is the author and the book is illustrated by Gareth Hector and Jim Laurier. You can view the book on Osprey's website, here.

While the Bf 109 is well known with thousands of pages written about it, new research or different aspects of its history often shed new light on discounted conventional wisdom and unknown stories.  Mr. Lowe richly enhances the technical aspects of this book with first-hand pilot reports and reminiscences from Werner Mölders, Adolph Galland, Theo Osterkamp, and Helmut Wick, et. al.

This book presents first-hand experiences of the pilots who flew the Bf 109E, the aircraft which first featured a Daimler-Benz DB 601 powerplant, and which was in the front line in the skies over Poland, the Low Countries and France, and the older Bf 109D, still in use in the Polish campaign.

In a rigorous and engaging new analysis, Luftwaffe aviation expert Malcolm V. Lowe examines and assesses the Bf 109 as a fighting machine from the perspective of the Luftwaffe at the forefront of the German blitzkrieg. Contemporary photographs and specially commissioned artwork, including a dramatic battlescene, armament views, technical diagrams and ribbon diagrams illustrating step-by-step each battle tactic of the main dogfights explored in the book, bring the experiences of the Bf 109 pilots vividly to life. 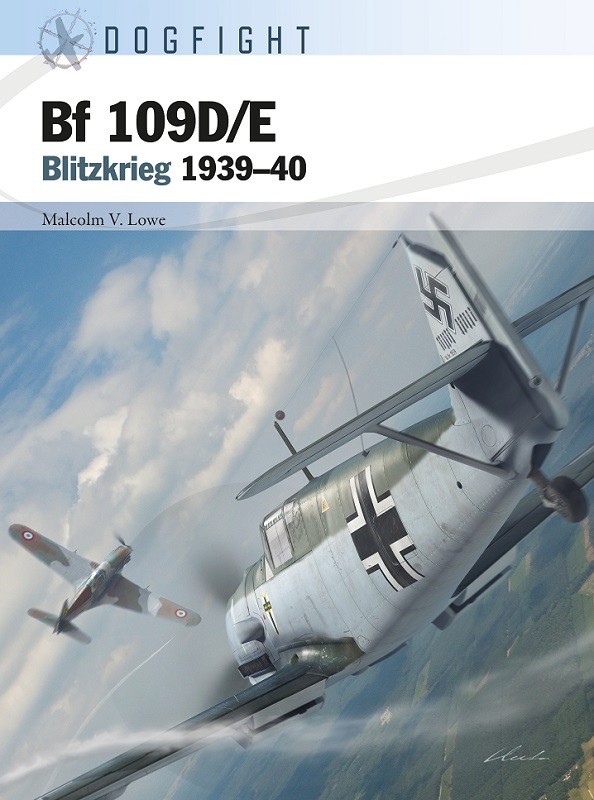 With 80 pages from title page though the index, much information is presented through six chapters and supporting sections:

Chapter 1
In Battle
Two case studies of aerial combat in the opening phases of World War II, these being the initial actions over Poland and the start of the Battle of France

Chapter 2
Setting the Scene
Design, development, production, early actions, the Polish campaign explained leading to detailed analysis of the Bf 109E's participation in the Battle of France against French and British aerial opposition

Chapter 3
Path to Combat
Charting the careers of two Luftwaffe pilots who flew the Bf 109E in combat during the opening phases of World War 2, including Johannes ‘Hannes' Trautloft who the author has studied in depth

Chapter 4
Weapon of war
A brief technical appraisal of the Bf 109E-1 and E-3, detailing their development and the weaponry they employed

Chapter 5
Art of War
Tactics for Bf 109E units at the start of World War II were in their infancy, and drew on combat experience during the Spanish Civil War and the actions of the Legion Condor. This chapter will look for example at the employment of the revolutionary ‘finger four' combat formation, and how it revolutionized fighter combat to the point where all other air arms eventually adopted it as a standard offensive formation. The ‘Split S' manoeuvre and the evolution of the Rotte and Schwarm tactical formations will also be explained.

Chapter 6
Combat
In this chapter, Bf 109E pilots explain what it was like fly the ‘Emil' in combat against the widely differing opposition that was encountered in the opening months of World War 2, from such obsolete, but highly agile, types as the Polish PZL P.11 to the French Morane-Saulnier MS.406 and British Hawker Hurricane fighters that had comparable performance to the ‘Emil'.

Mr. Lowe has created an interesting and informational book as you read in the contents above.  However, some parts must have been left on the editor’s floor as Johannes ‘Hannes' Trautloft is not profiled, and only appears in one photograph and caption.  There is no appendix listing early Bf 109E units, aces or performance data, but there is an aftermath and selected sources sections. Regardless, this book offers more than I have previously read in so many other Bf 109 books.  In Battle introduces the Bf 109 beginning with its first Second World War shootdown on September 4 during British raids against German shipping along the German north coast.  The author includes that of the first two '109 pilots to shoot down RAF bombers, Nazi propaganda chose the second one as making the first kill, and includes Gruppenkommandeur Schumacher's acknowledgement that the other pilot was first.  We also find the first of pages of first-hand accounts:

When we approached we saw they were twin-engine Wellington bombers.  Two saw us, and at once flew towards the low cloud.  I approached the third.  When he was right ahead of me I closed to 100m to make certain that I could hit him.  I began firing, and closed to 50m.  His port wing broke up and fell away.  Flames came out of the fuselage.  I closed to 20m, but by then the bomber was engulfed in flames.  The tail broke away and I was lucky because it passed just above my head.

The importance of radar and other German organization is covered in this chapter.

Next, Settling the Scene discusses not only the technical development of the Bf 109, it also looks at Nazi ascent to power, Luftwaffe airfield construction, use over Spain and Poland, pre-war international jousting, and formation of units and changes to their designations, to name a few subjects.  Again, quotes from '109 aces support the text, i.e., Adolf Galland's 1953 interview with the RAF's Air Historical Branch, and by the pilot who scored the first kill for I./JG 77.  It explores Mölder's refinement of early of modern fighter tactics.  Osterkamp's account of a kill against a Dutch fighter is included along with his musing of returning to base in the first World War with, "...'only' 68 bullet holes in my bird."

Path to Combat begins describing the Luftwaffe's fighter pilots - Jagdflieger - and profiles Osterkamp, Mölders, Galland, and Harry von Bulow-Bothkamp.  This chapter features Mölder's account of his first kill, as well as shooting down a Blenheim, his being shot down in a dogfight with a Ms 406, and his assessment of the Spitfire and Hurricane after flying captured examples.  Early dogfights by Galland are chronicled, too.  This chapter hosts the first of several tactical ribbon diagrams and battlescene art .

Weapon of War begins with tracing the origins of the Bf 109, and its development with different powerplants and weapons.  Technical data is included giving the reader a better understanding of the Bf 109 developments and changes.

Art of War again explores the type in Spain and continues with Mölders’ development of tactical formations.  Pilot training is touched upon.  Strengths of the Bf 109 compared to Allied types are touched upon, although the author's description of the '109's ability to shove over into a negative-G dive without starving the engine of fuel due to its fuel injection is not explained correctly.

Combat wraps up what we learned in the previous chapters into the appreciation of the '109 at work.  As such, more focused detail is able to be included within the 80 pages of this format.  More ribbon diagrams are used to recount the attack on a Dutch airfield, and tearing up a French fighter formation.  While references to the Battle of Britain are included, the story in this book ends at the capitulation of France.  I have read many books on the Bf 109 in general and the early Bf 109 in particular - including biographies of some of the pilots spotlighted in this book - and yet found bits of new material I was not familiar with.  Now we will look at the graphics that support the text.

Modelers, historians and artists will find a strong gallery of photographs reinforcing the text.  You may see some you have seen before but I found many that are new to me.  Modelers will find several excellent images suitable for researching camouflage and markings, and several worthy of dioramas.  I noted many I will use as reference material for engine and armament detail, cockpits, internal structure, and external treatments.  Portraits of the pilots are useful, especially when they are in or around their aircraft.  To in particular are of Werner Mölders and his specially marked Bf 109E-3 during the Battle of France - I won’t say why one is particularly interesting to me other than to hint that I won’t drive myself crazy trying to perfectly align decals any longer.  Others are studies of sponge-painted camouflage on JG 2 ‘109s.  Another unique scene is an air-to-air shot of a pair of Bf 109Ds dogfighting.  Yet another is of a schwarm that clearly displays variations in the application of dorsal camouflage.

Original artwork by artists Gareth Hector and Jim Laurier fill in views and scenes that the camera missed.  The tactical ribbon displays (TRD) diagram the complexity of an aerial engagement (even simple ones) although one must concentrate on them to fully absorb what they depict.  Each ribbon display is accompanied by a multi-step narrative and each illustration has a caption  and description.

1.  TRD: 0450 hrs, 10 May 1940 illustrates through 11 key events a strafing attack against the Netherlands De Kooy Naval Air Station which evolved into a dogfight.

6.  Clash of Aces: 2-page battlescene of Werner Mölders getting shot down by a Morane French ace.

As previously mentioned, there is no listing of early Bf 109E units, aces and performance data, as advertised on Osprey’s website. 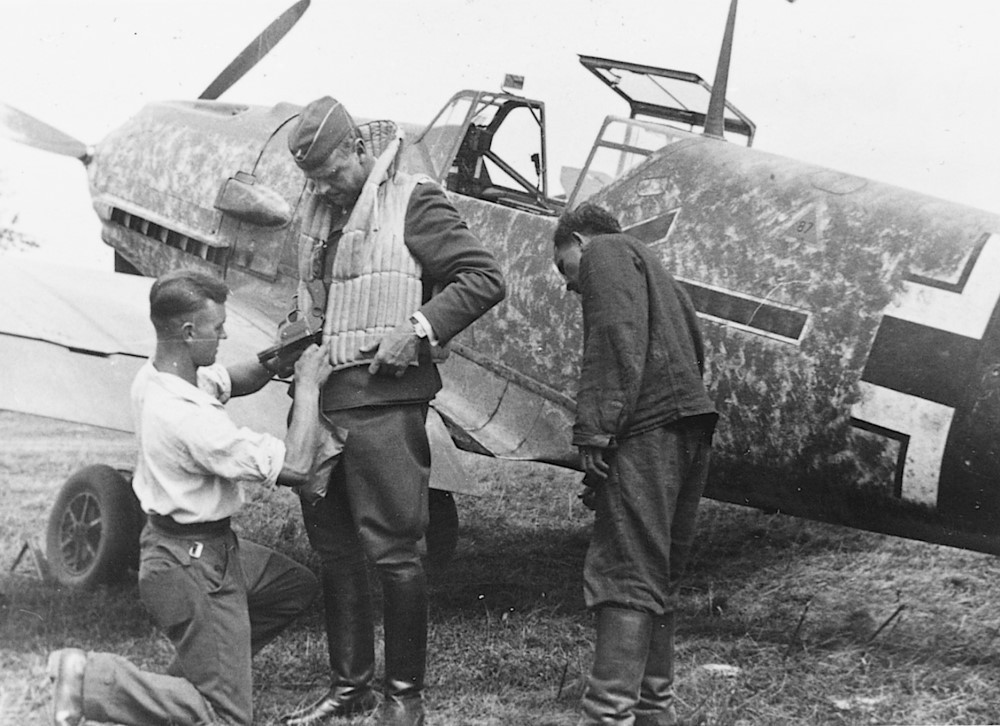 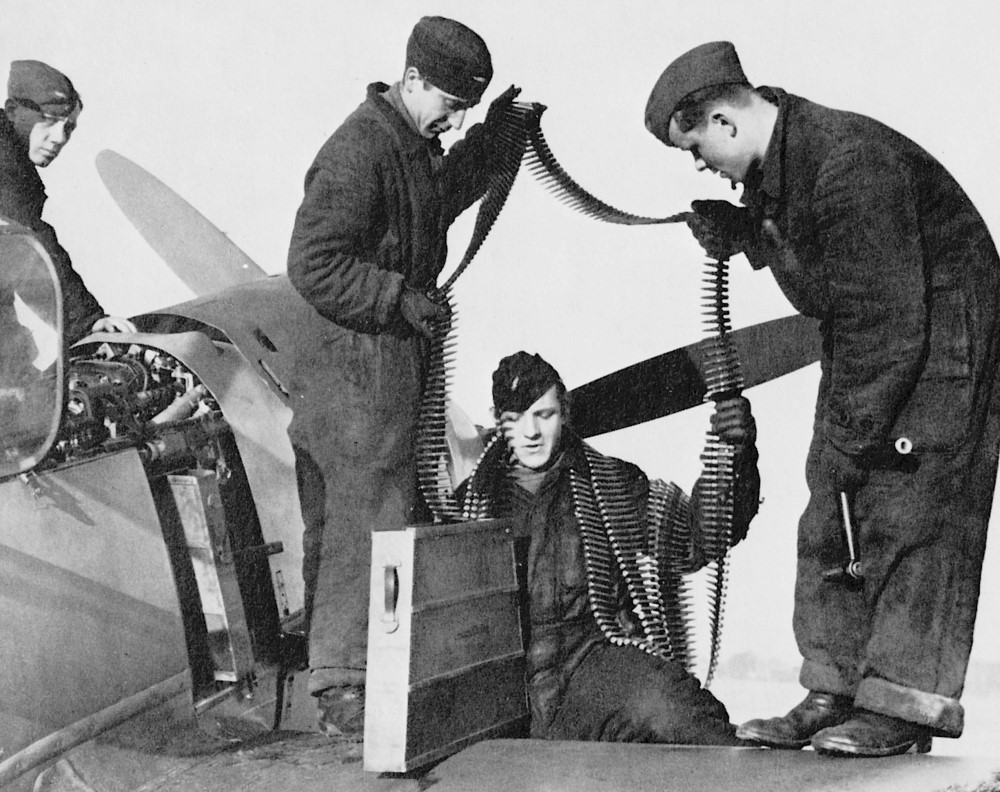 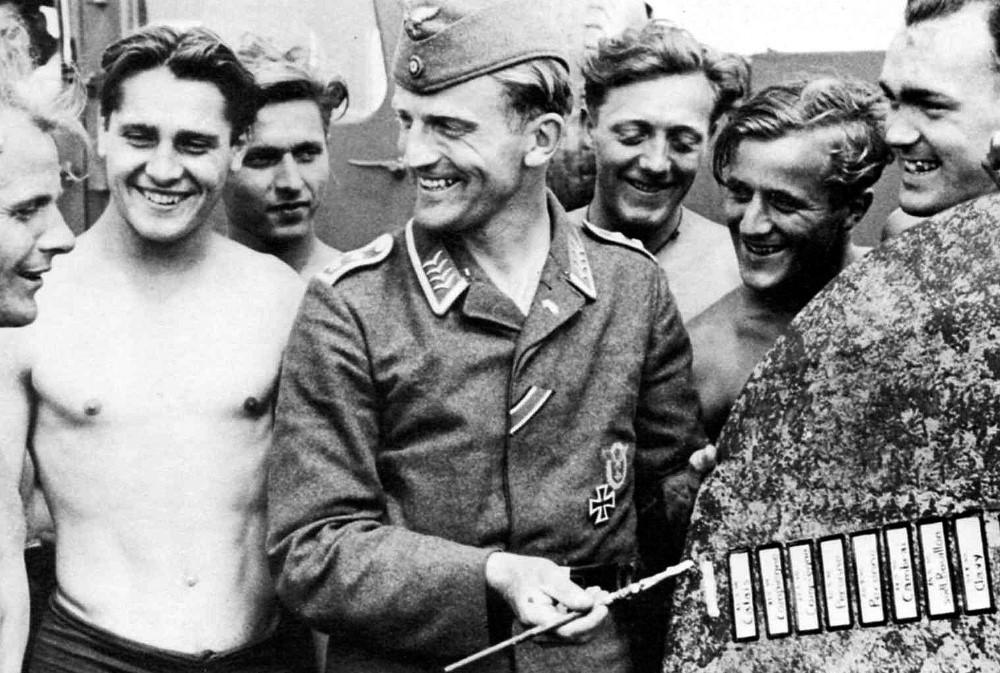 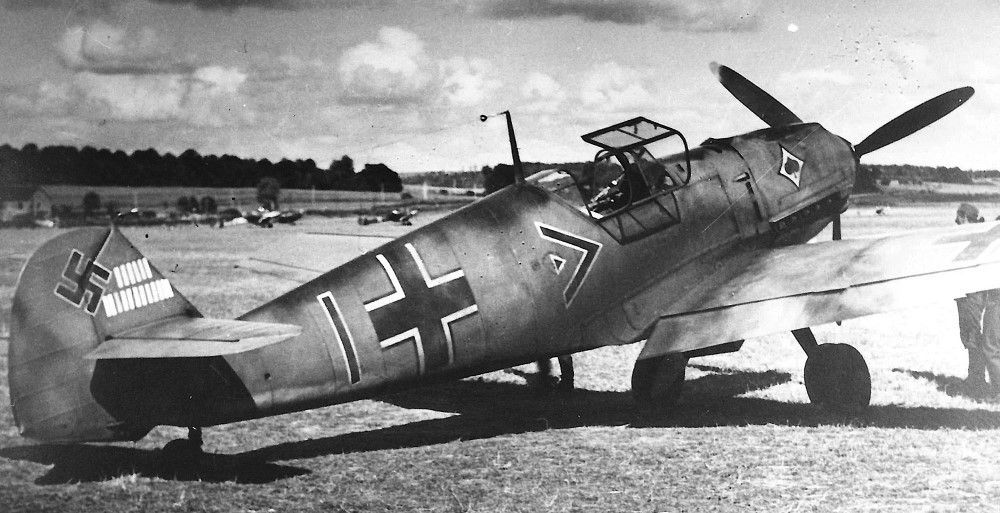 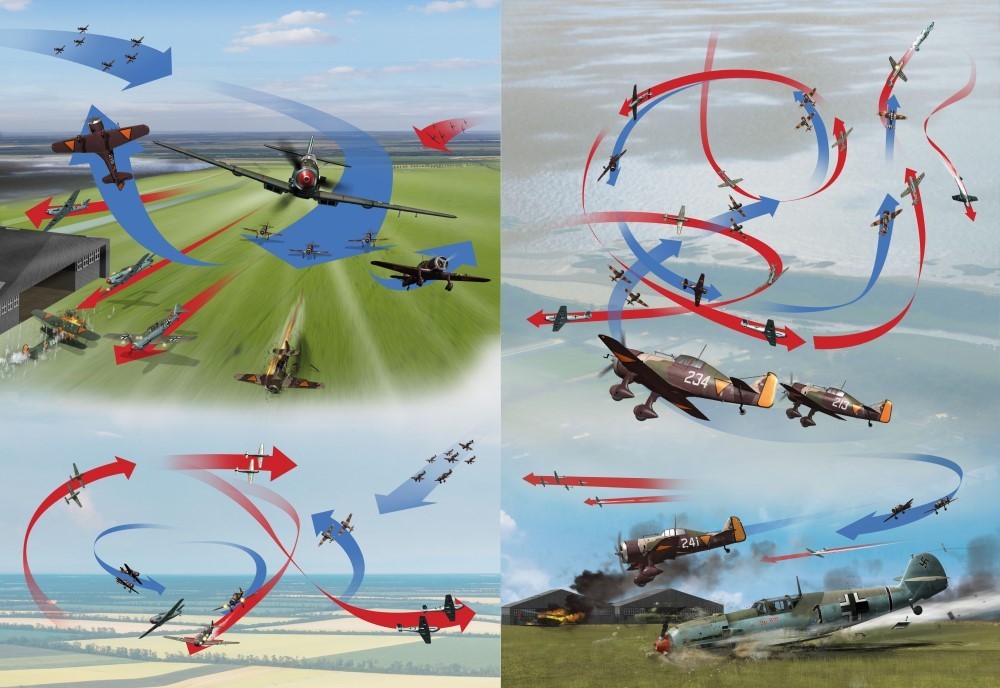 Bf 109D/E Blitzkrieg 1939-40 is another good title in Osprey's new series Dogfight.    Like the first title Focke-Wulf 190D-9, it presents scholarly material full of first-hand Bf 109D/E pilot reports and accounts focused on "There I was," as well as technical details.  Modelers, historians and enthusiasts of the  Bf 109 should find this book to be a concise, useful and unique part of the aircraft's history.  Modelers may find source material and inspiration for their early-war Bf 109 model.  A useful gallery of photographs and artwork provide support to the text.

I thoroughly enjoyed learning about the Dora and Emil variants of Messerschmitt's Bf 109 and the legendary pilots who flew them.  I look forward to the next subject in the series: F-86A Sabre, Korea 1950–51 (Dogfight 4).  Recommended.