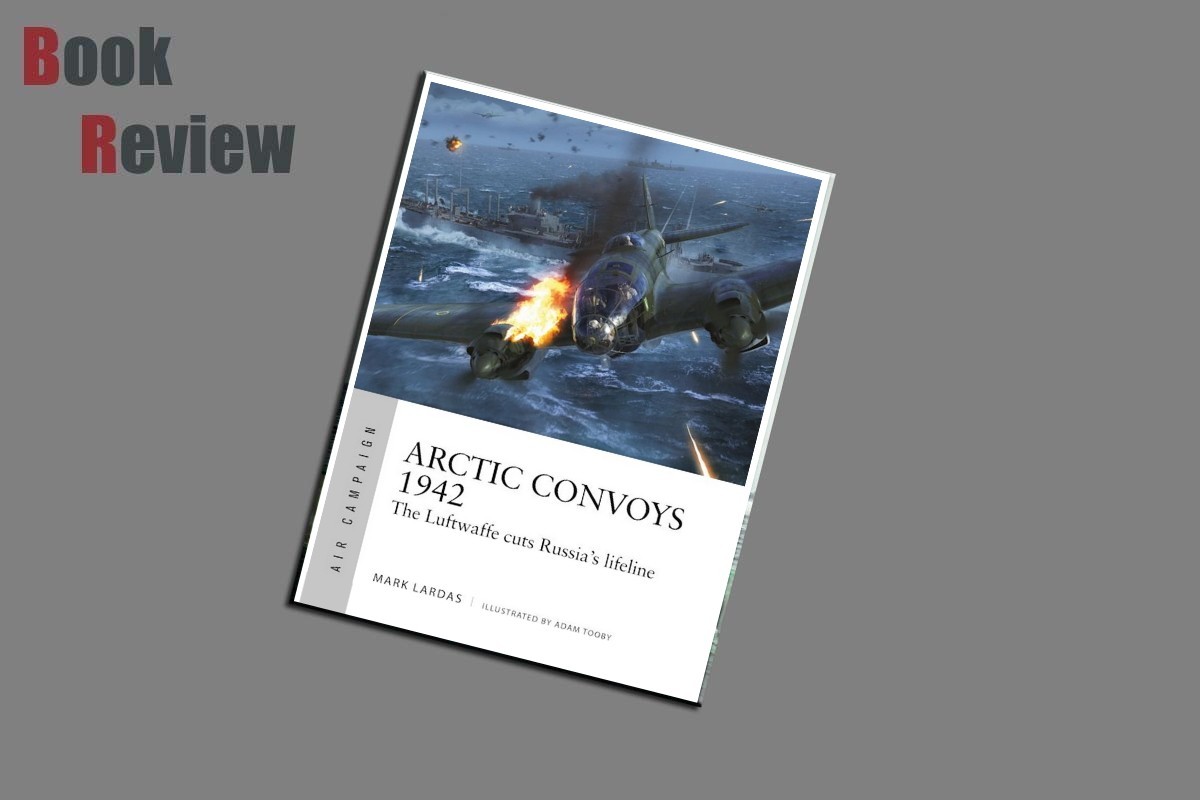 ARCTIC CONVOYS 1942 THE LUFTWAFFE CUTS RUSSIA'S LIFELINE  is title 32 in Osprey’s series Air Campaign.   You can see it through this link.

Authored by Mark Lardas and illustrated by Adam Tooby, it is 96 pages from cover to cover. The softback is cataloged with ISBN 97814728 62434. It is also available in PDF and ePUB. Air Campaign books are known for their battle scenes, bird's-eye views, maps and diagrams and in-depth analysis.  Osprey describes them as How history's greatest air wars were planned and fought, and why they were won and lost.  I've read several of them, and think well of the series.

A new history of the most crucial few months of the Arctic Convoys, when Germany's air power forced the Allies to retreat to the cover of winter.

Between spring and autumn 1942, Germany was winning the battle of the Arctic Convoys. Half of PQ-15 was sunk in May, PQ-17 was virtually obliterated in July, and in September 30 percent of PQ-18 was sunk. The Allies were forced to suspend the convoys until December, when the long Arctic nights would shield them.

In this book, Mark Lardas argues that in 1942, it was Luftwaffe air power that made the difference. With convoys sailing in endless daylight, German strike aircraft now equipped and trained for torpedo attacks, and bases in northern Norway available, the Luftwaffe could wreak havoc. Three-quarters of the losses of PQ-18 were due to air attacks.  But in November, the Luftwaffe was redeployed south to challenge the Allied landings in North Africa, and the advantage was lost. Despite that, the Allies never again sailed an Arctic convoy in the summer months.

That last line is a surprise to me. I always assumed that as our strength grew in 1943 and 1944, that we ran our convoys anywhere, anytime we wanted. It is surprising to me that we never did sail convoys north to Russia in summer for the rest of the war.   So, with that piquing my interest, I cracked open the book and started reading. Here's what I found. 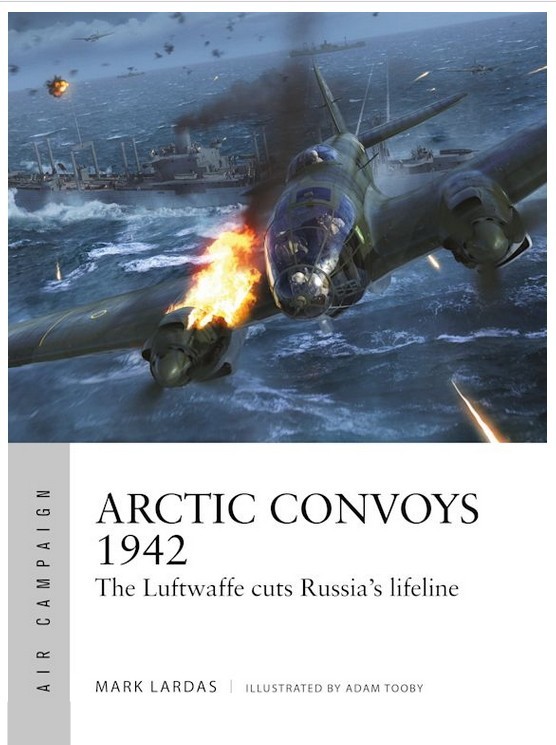 Arctic Convoys 1942  follows the format of Air Campaign books, those standard topics being:

I think the book is smartly organized and easy to read. The author does a good job with descriptions and setting up the scene for major occurrences and plans. Introduction starts in February 1942 discussing the Allied convoys to keep Russia in the war. The German Kriegsmarine is always a menacing shadow with their battleship and pocket battleships, ready to sally forth to engage the convoys with big guns.  Plenty of war material was available from the Western Allies but getting it to the Soviet Union was the problem. Russia had two northern ports, Murmansk and Arkhangelsk. There were two other routes to Russia but they were long and slow. The Arctic was the shortest and fastest way and, as usual, the most dangerous. Not at first but it quickly became so.   A useful chronology then follows with dates that shows that fact.

Attackers capabilities begins with introducing the Luftwaffe’s maritime strike assets.  It provides a good concise description of the Junker Ju 88,  Heinkel He 111, He 115, Blohm & Voss BV 138, Focke-Wulf Fw 200 and Stukas. These brief descriptions include the capabilities of the aircraft and a short paragraph of their wartime histories. Next, the author examines the facilities and infrastructures the Germans used and the sighting of facilities with regard to the impact of the elements. Next, weapons and tactics are discussed, describing the various bombs and torpedoes the Germans used, including their technical qualities such as explosives used for the warheads and the fuel used for torpedoes. Even machine guns and cannons are discussed. How to deliver the weapons are covered, i.e., conventional bombing, glide bombing and dive bombing, torpedo bombing, advantages and drawbacks of each attack are presented.

You can't have the attackers without defenders and Defenders capabilities starts off with fighting power of the convoy.  Like the attackers, this chapter starts with analyzing the aircraft: Sea Hurricane, Fairey Albacore, Fairey Swordfish, Hampton  and Catalina.  They are covered in the same manner as the German aircraft - a brief account of their history and a brief description of their capabilities.  I was surprised to learn a few things in this section. Next, facilities and infrastructure of the Allies are covered as the German’s.  It's interesting to read about the procedures of loading the cargo and where the convoys originated from, and the makeup of escorting warships.  I don't know why it surprises me but the coverage of the use of oiler ships for the convoys is eye opening.  Weapons and tactics then examine what the Allies had to try to stop the Germans.  Also covered is that unique peculiar supplement to aircraft carriers, the Catapult Armed Merchantman.  Fans of the American Wild West may get a laugh out of the author's description of the CAM.

Campaign objective starts in the area of Norway to Russia with both Allied and German objectives and plans. While these should be obvious, the depth at which the author covers them is enlightening as it touches upon political-economic considerations. Goering’s Luftwaffe versus Dönitz’s U-boats in particular. Trials and tribulations the Allies faced are focused upon, too. Keep in mind that when these convoys were formed and run, the United States was not producing a Liberty ship every 42 days, and in one instance, the SS Robert E. Peary was laid down and launched in less than 5 days.

The Campaign starts out with the origins,  August 21, 1941, through late February 1942.  Interesting is the fact that Stalin had to accept British fighters to help protect his ports. This chapter focuses on what assets each side had, and how they were or were not significant for some or all of the campaign. Sub-chapter Enter the Luftwaffe gets to the heart of this book, especially subsections The Torpedo Bomber Appears and The Luftwaffe Ascendant. The Empire Strikes Back recounts how the Allies upped their game with more gun escorts and enhanced aircraft carrier capability.  Again, for me, an interesting revelation concerns surface units provided by the United States Navy before they were needed in the Pacific.  Finally, Three More Years of War narrates the effect on Allied psyche that German air attacks on the Arctic convoys achieved, and the effects on moving material to save Russia. It examines German and Allied losses, re-equipment, new weapons and tactics, and whether it made a difference for Arctic convoys. Aftermath and Analysis discusses what the Allies and Germans did right, what they did wrong, what equipment that they had that was worthwhile, and how those factors played into the conduct of the rest of the war. It states how many tank corps and mechanized rifle corps were deprived the Russians as well as aircraft, leaving one to speculate how 1942 could have turned out different. This chapter also touches upon what became of the surviving aircraft and ships, including a bomber that was shot down and rediscovered in 1991, to be recovered and taken for restoration in a museum; a fine color photograph displays that aircraft.  The author discusses that of the various machines of war used in this campaign, and how many still exist either in whole or in pieces, in museums and collections.

Overall, this has been a very interesting read of a part of the war I'm not well versed on. Hundreds if not thousands of pages have been written about the Arctic convoys over the years. This book is not a comprehensive retelling of that part of the war, rather a detailed overview.  I think it does a very good job of whetting the reader's appetite if they want to seek out more in-depth subjects. Still, I learned some things, and some of them are surprising.

The book is well Illustrated with black-and-white photographs and custom artwork. There are photos that I've seen before but there are a lot of photos that, having not read a lot on Arctic convoys previously, are new to me. Several are very interesting.  Some of them put a shiver down my spine such as a photograph of the horrific ice buildup on all exposed portions of a ship on the Murmansk run.  The quality of the photos span the gamut from grainy newspaper or motion picture images, to professionally composed and exposed images, even from the convoys.  For modelers I think some of these photos will inspire the desire to build a model of the subject, and there are a few that are good for source material for markings and camouflage.  While I think it's difficult to make dioramas of subjects as large as ships, especially in ports, I know that it is achievable and there are some scenes that I would like to try to recreate.

Artist Mike Tooby created some amazing scenes of what the camera missed. I doubt any of you buy these books just for the battle scenes but some of these are the most remarkable and exciting illustrations that I recall from this series.

4. Bird’s-eye view: Defending an Arctic Convoy With Anti-Aircraft Artillery presents an aircraft view of a battle, keyed to seven British assets and five German. It analyzes what altitudes the Germans flew, when the Allies could expect to detect them, and the ranges went various weapons were employed.

5.  Battlescene: Hurricat in action with a half-page narrative of a two-page illustration showing a Hurricane harvesting a Ju 88 in twilight.

9. Battle scene The Survivors is half a page of narrative accompanying a two-page illustration as seen from the deck of a transport sailing through icy waters under a midnight sun. (Okay, I know this isn't why you buy books, but this really is a beautiful piece of artwork.)

11. Battlescene Death of the Mary Luckenbach – half-page of narrative for a dramatic two-page illustration of the ship just before being struck by torpedoes, seen from ahead of the launching aircraft that is just been set ablaze from anti-aircraft. Air Campaign books feature some amazing artwork and this is one of the most dramatic illustrations I've seen. 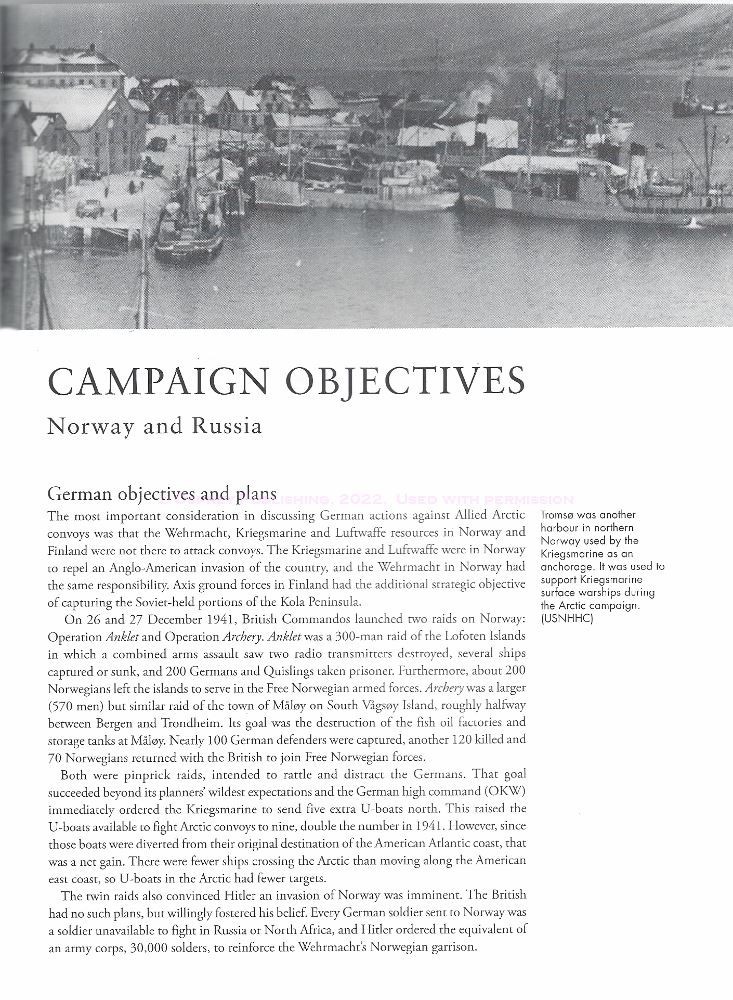 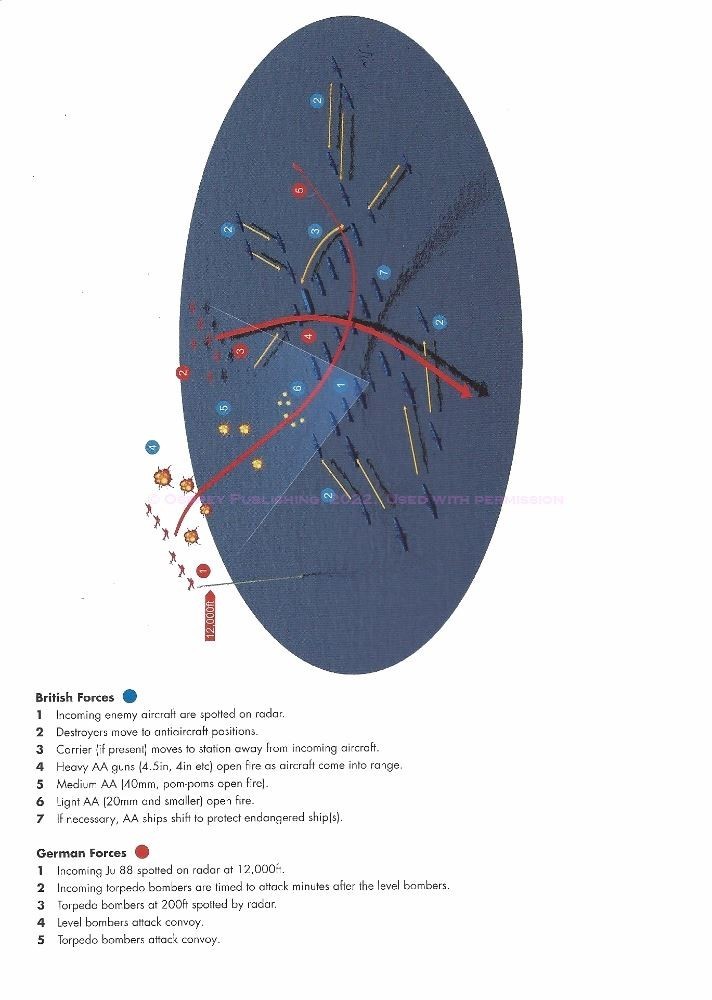 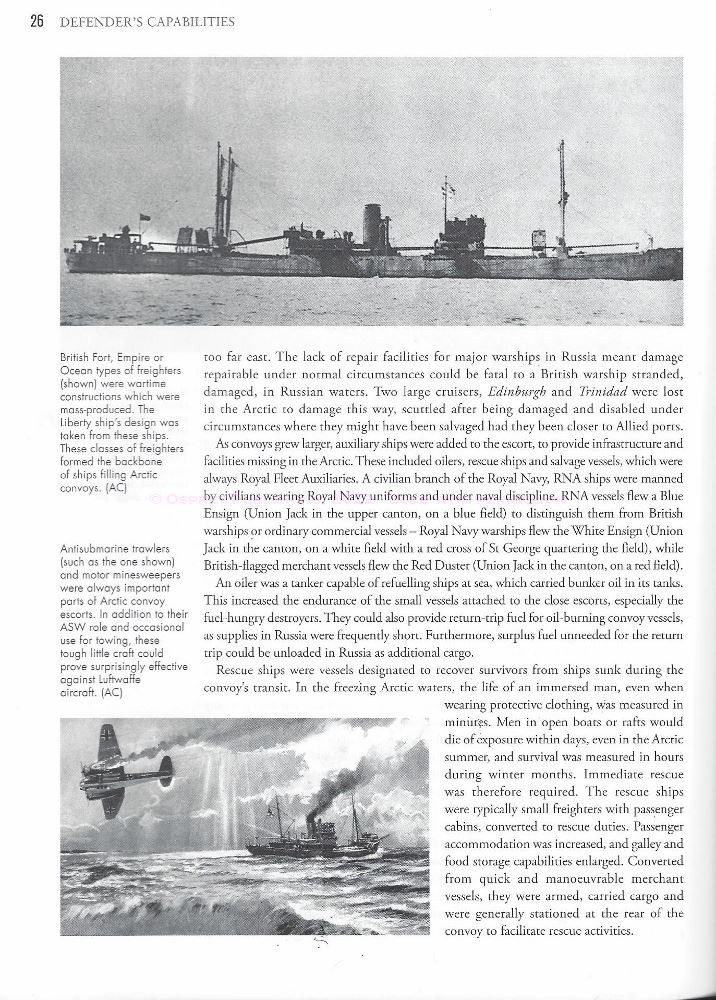 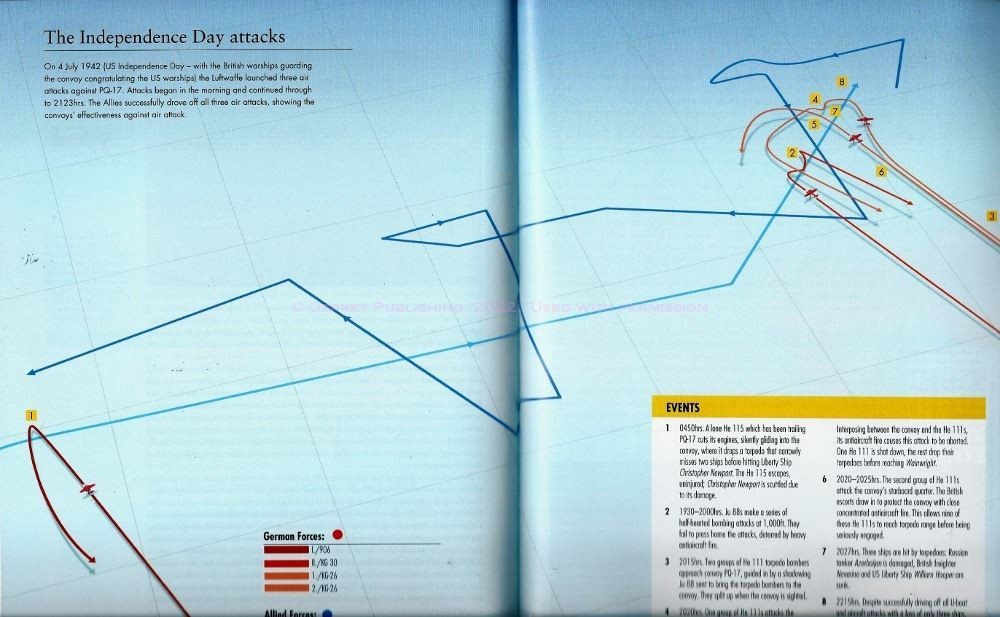 Arctic Convoys 1942 from Osprey pleases me as a thorough introduction to this essential campaign of the war.  While no doubt thousands of pages have been written about it either in an overview or about specific events and participants, it's new for me and it has answered some questions while cultivating more, and giving me an idea where to start finding answers.  With a gallery of supporting photographs and excellent artwork and graphics, the book possesses fine visual support.

Please remember to mention to Osprey and retailers that you saw this product here - on Aeroscale.