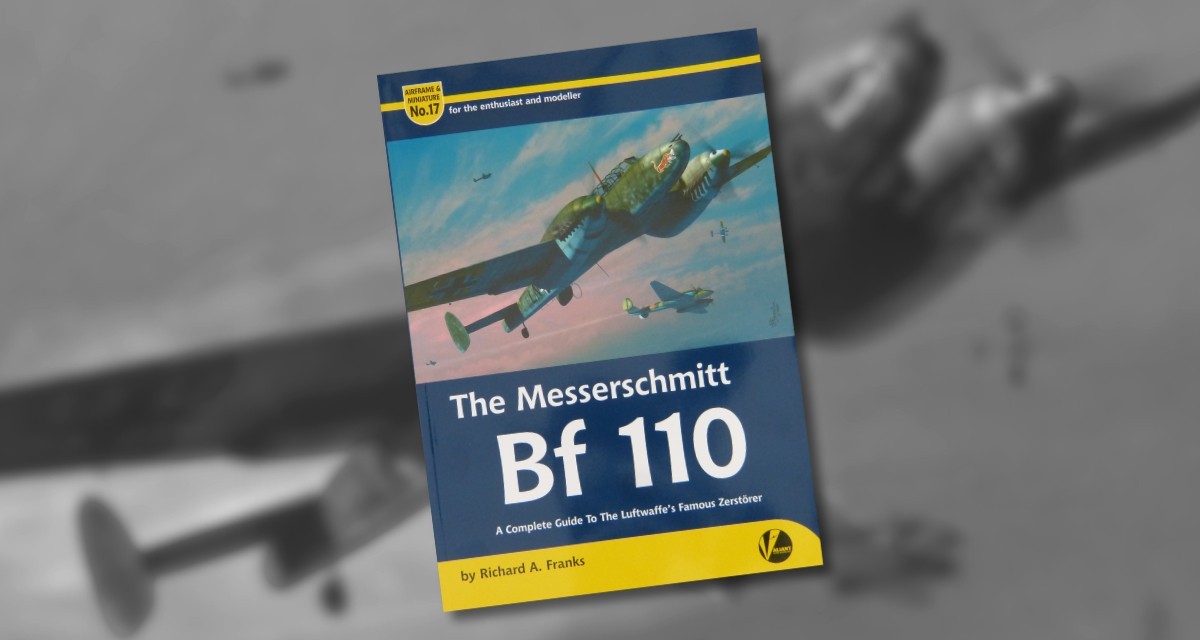 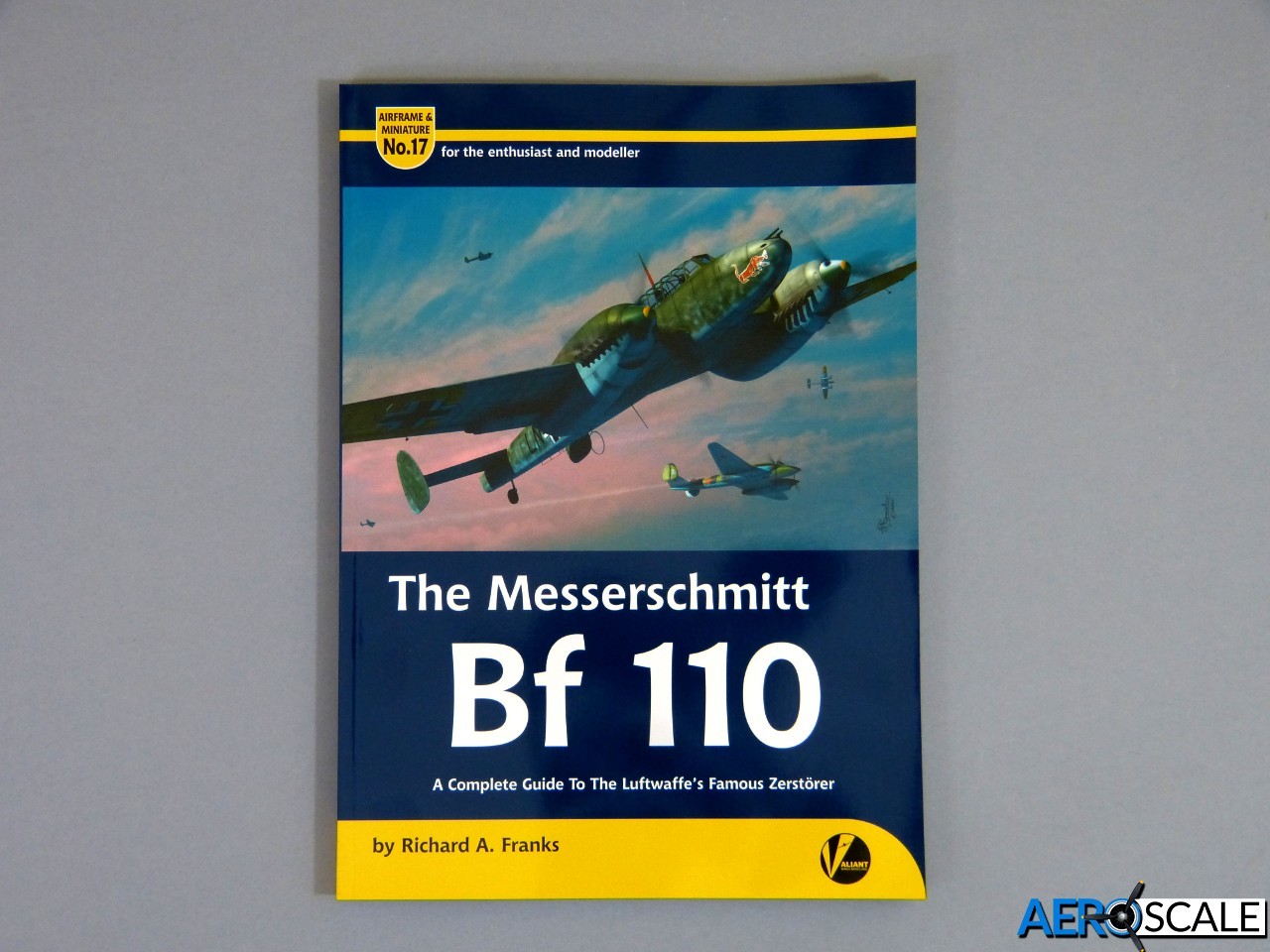 In the latest addition to Valiant Wings' series of highly useful combined reference/modelling guides, Richard Franks describes the  Messerschmitt Bf 110. The aircraft famously struggled as a heavy fighter when faced by modern single-seaters, but  went on to serve with distinction in a variety of roles far beyond what was originally envisaged.

The 256-page soft-bound book contains hundreds of vintage and modern photos and illustrations, and breaks down into two main sections - Airframe Chapters and Miniature Chapters - followed by a series of Appendices.

Preceding the main coverage is a 33-page introduction. Describing the section this way really doesn't do it justice, because it is quite a comprehensive history of the design and development of the Bf 110, followed by its service history. The chapter begins with an overview of the Zerstörer concept and the designs from competing firms in response to the original Luftwaffe specification. When one considers the mauling that the Bf 110 received at the hands of the RAF during the Battle of Britain, it hardly bears thinking about how its  lumbering competitors in the trials would have fared.

All the major milestones of the aircraft's career are covered, backed up by plentiful contemporary photos, and the section goes on to describe the BF 110 in foreign service along with the airframes captured by the Allies, ending with a list of the sadly few surviving examples and components. 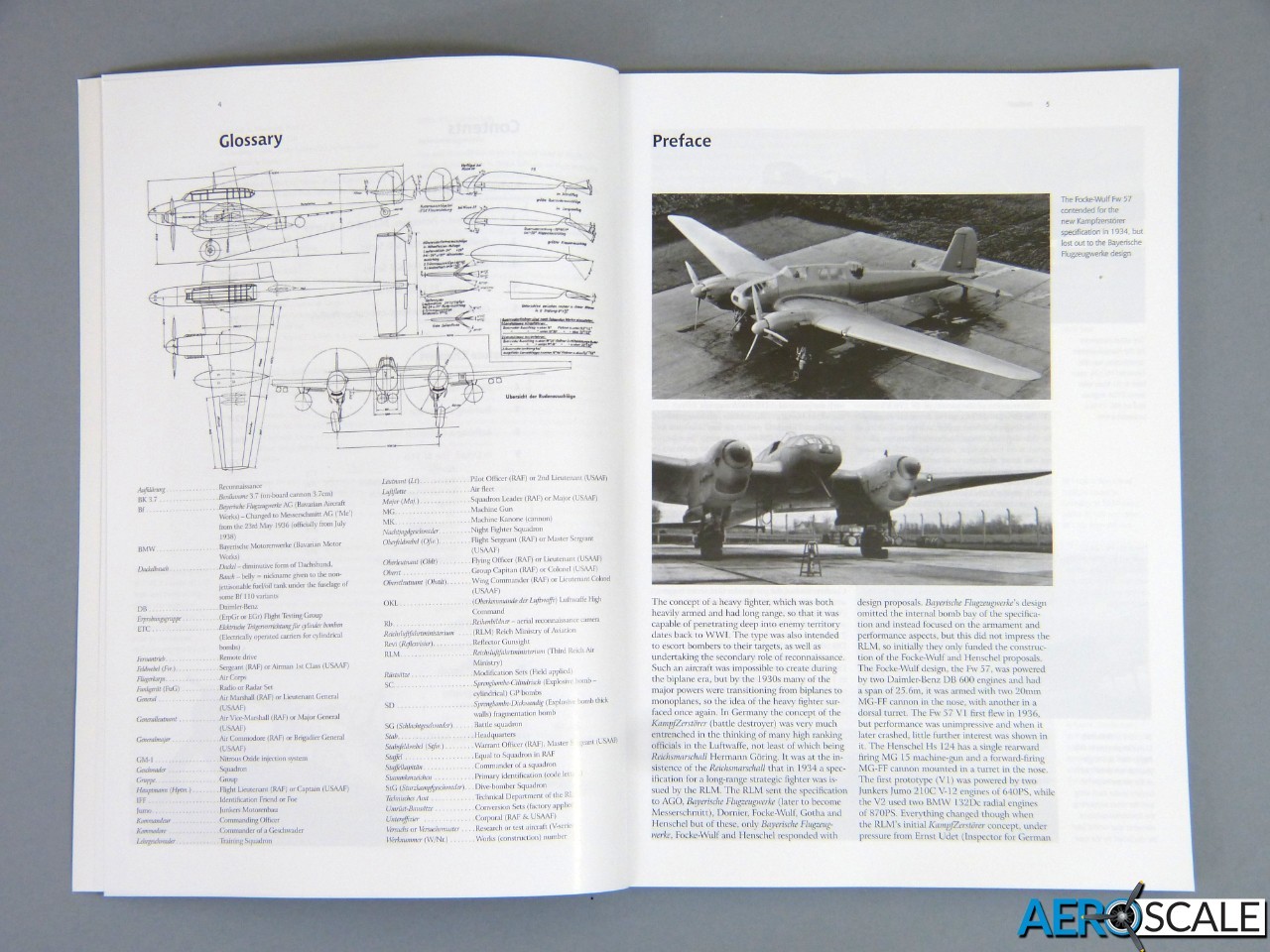 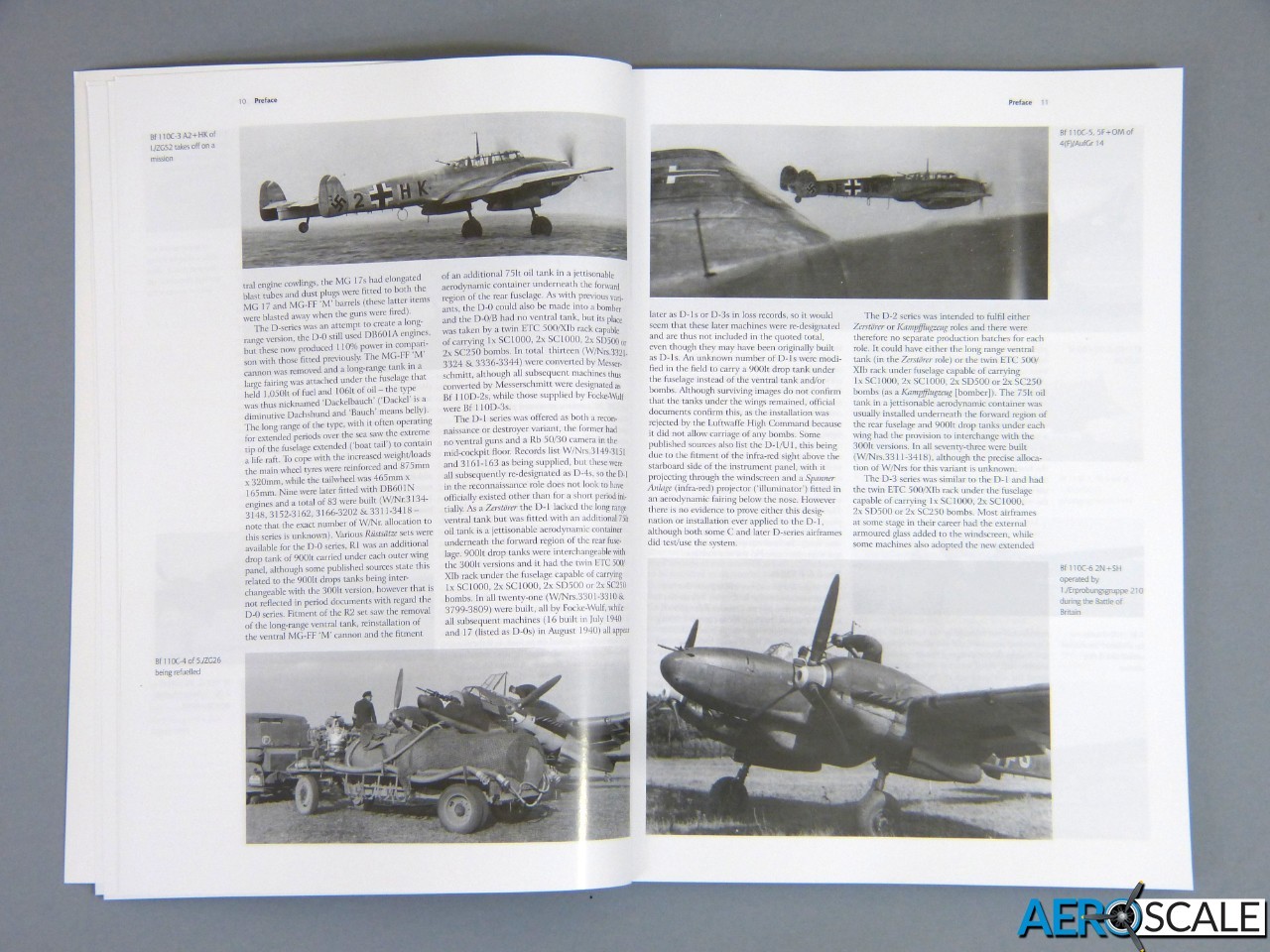 Spread over four chapters, Evolution covers the Bf 110 from the prototypes through to the final unbuilt 'H series. Each variant is described succinctly, listing the changes and developments, with the text accompanied by period photos and useful side-view diagrams by Juraj Jankovic. 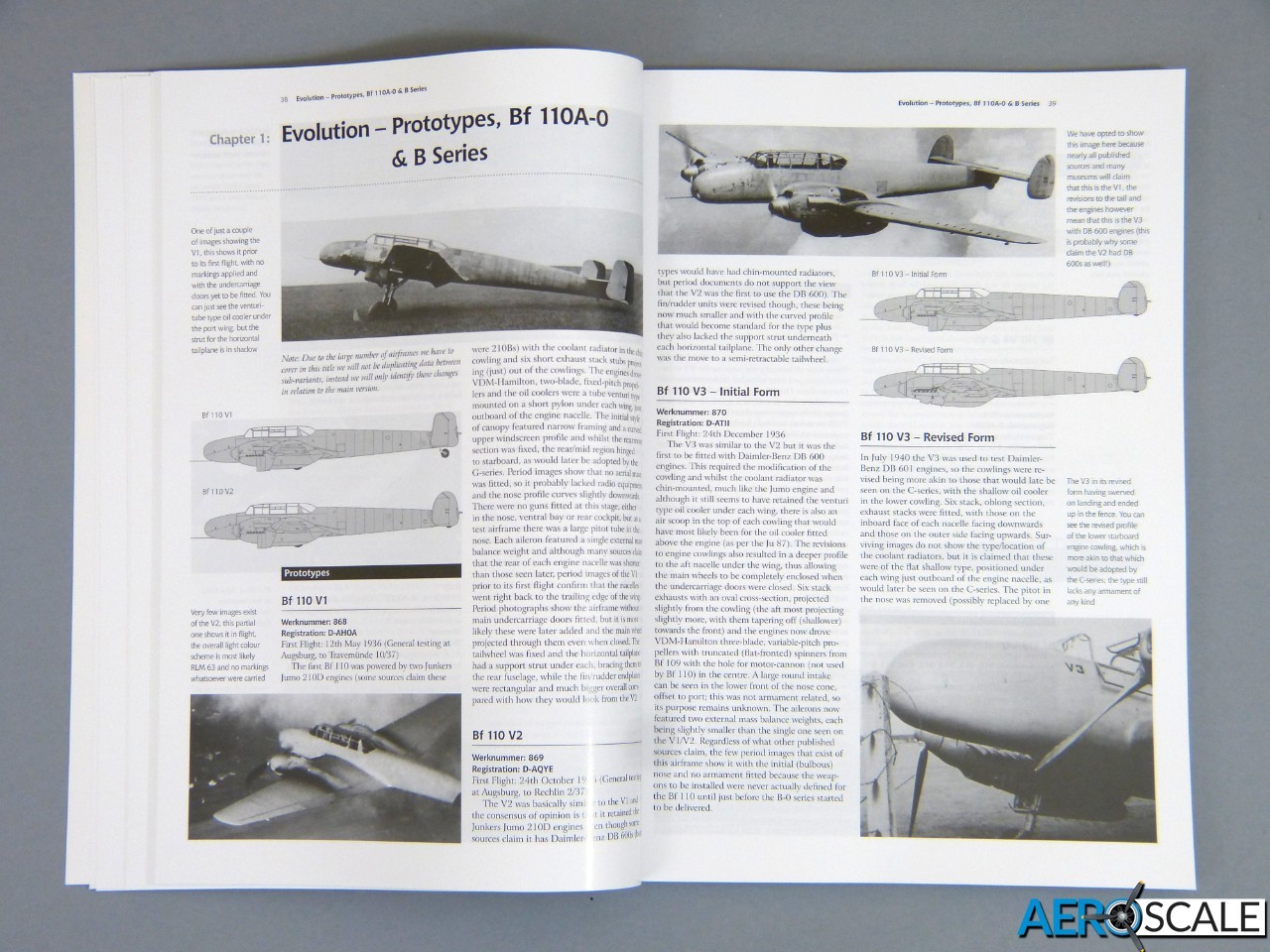 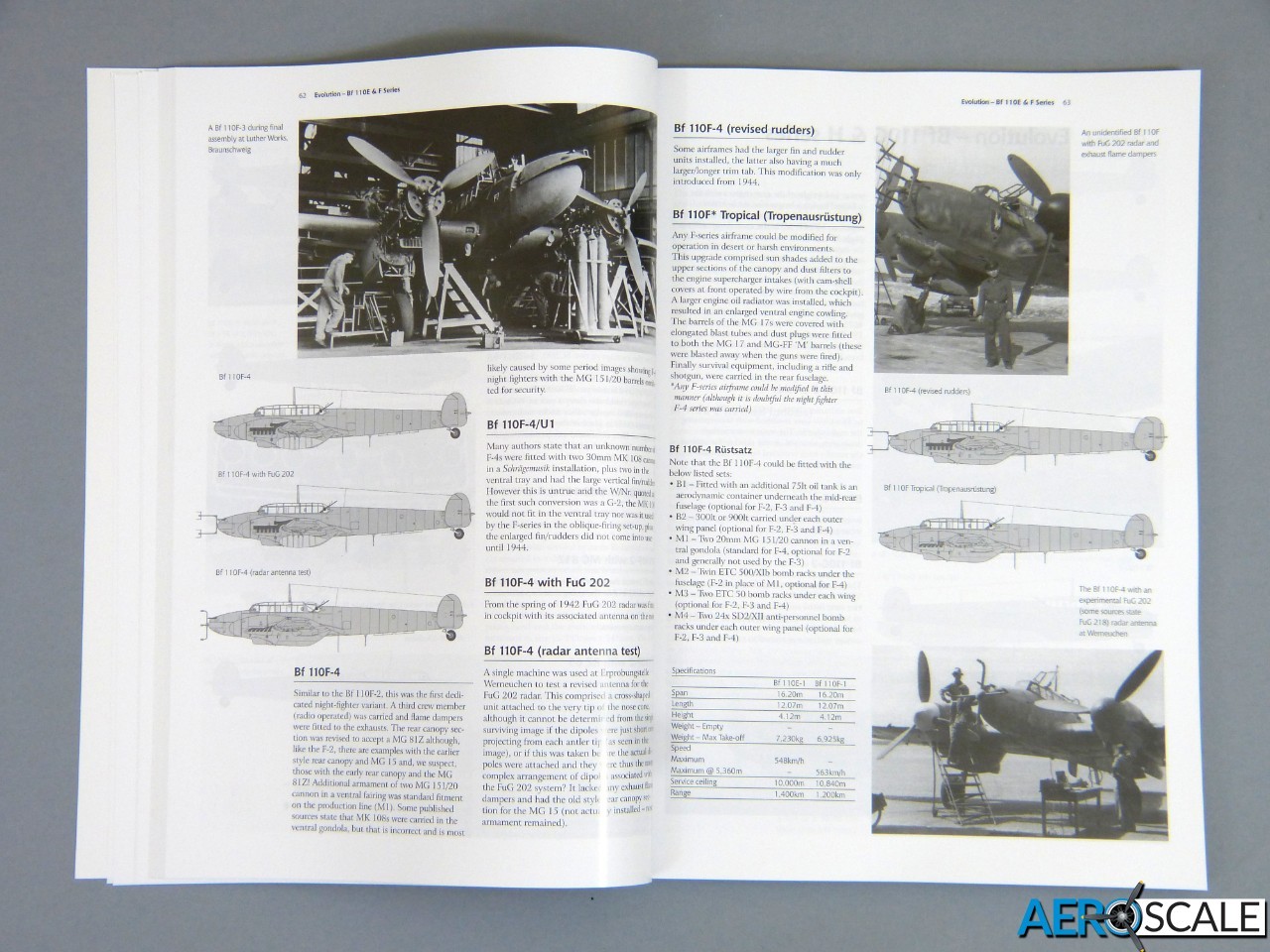 In Camouflage & Markings, the author covers a lot of ground, describing day and night colour schemes, plus the aircraft operated by Germany's allies and captured machines. Colour profiles by Richard Caruana whet the appetite for some interesting builds, and there are some useful period photos. As usual, the author precedes his description of the schemes with a warning of the perils of basing one's conclusions purely on the study of vintage photos - usually B&W and taken under varying conditions with unknown film-stock. So, it's particularly useful where a sprinkling of original colour photos have been included too. One which caught my eye is of an Italian-operated Bf 110C, as it gives a very useful idea of the tonal contrast of what appears to be somewhat weathered RLM 70/71 splinter camouflage. It's certainly easier to differentiate between the colours than is frequently the case in B&W shots, and also greater than in the accompanying profile illustration. The pronounced sheen of the black undersides is also noteworthy.

The section includes a useful page of stencil marking placement details.  Obviously, there will always be field-applied exceptions which are beyond the scope of the article, but Valiant Wings provide an excellent general guide to what to look out for when interpreting colour schemes. 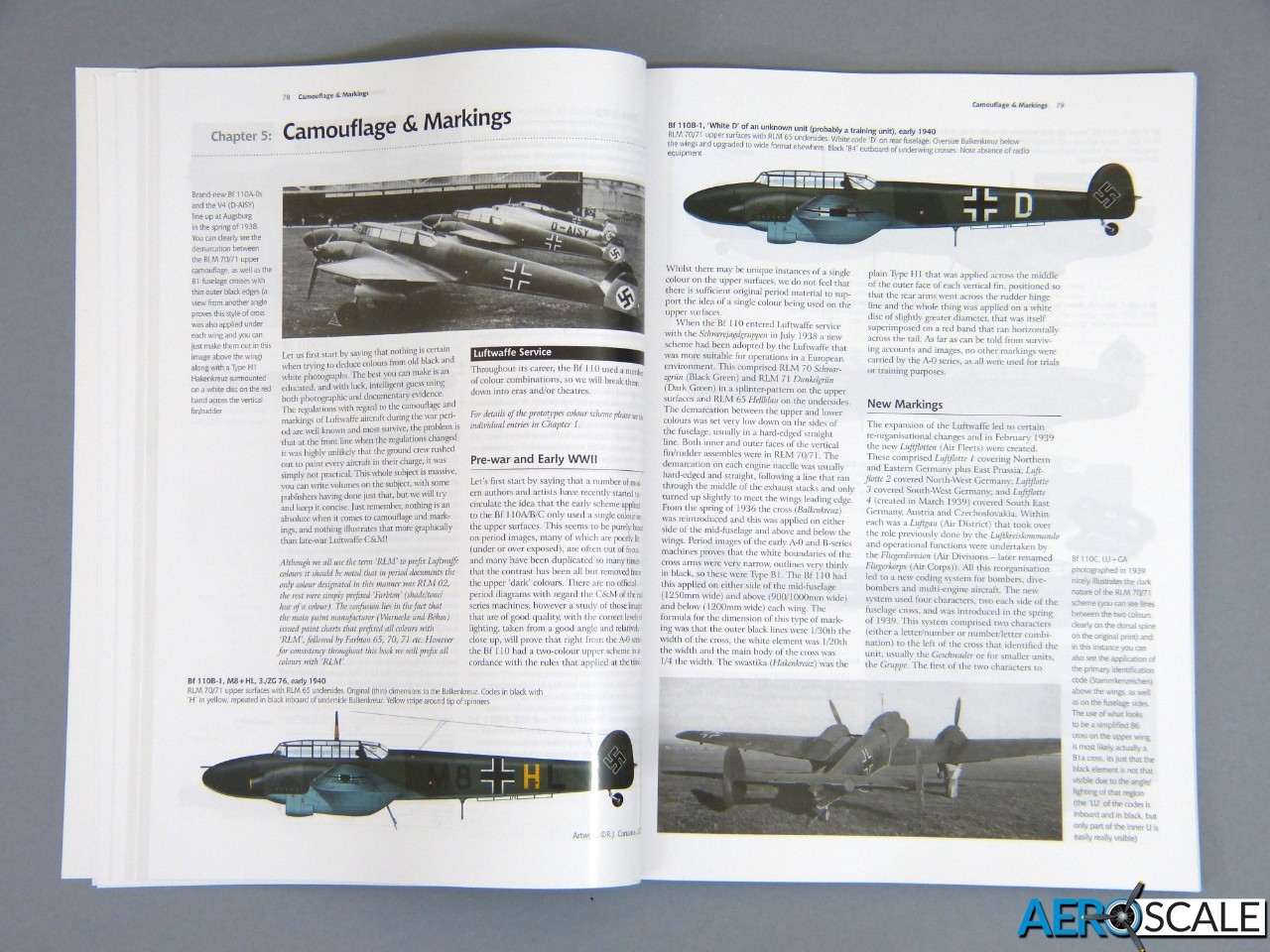 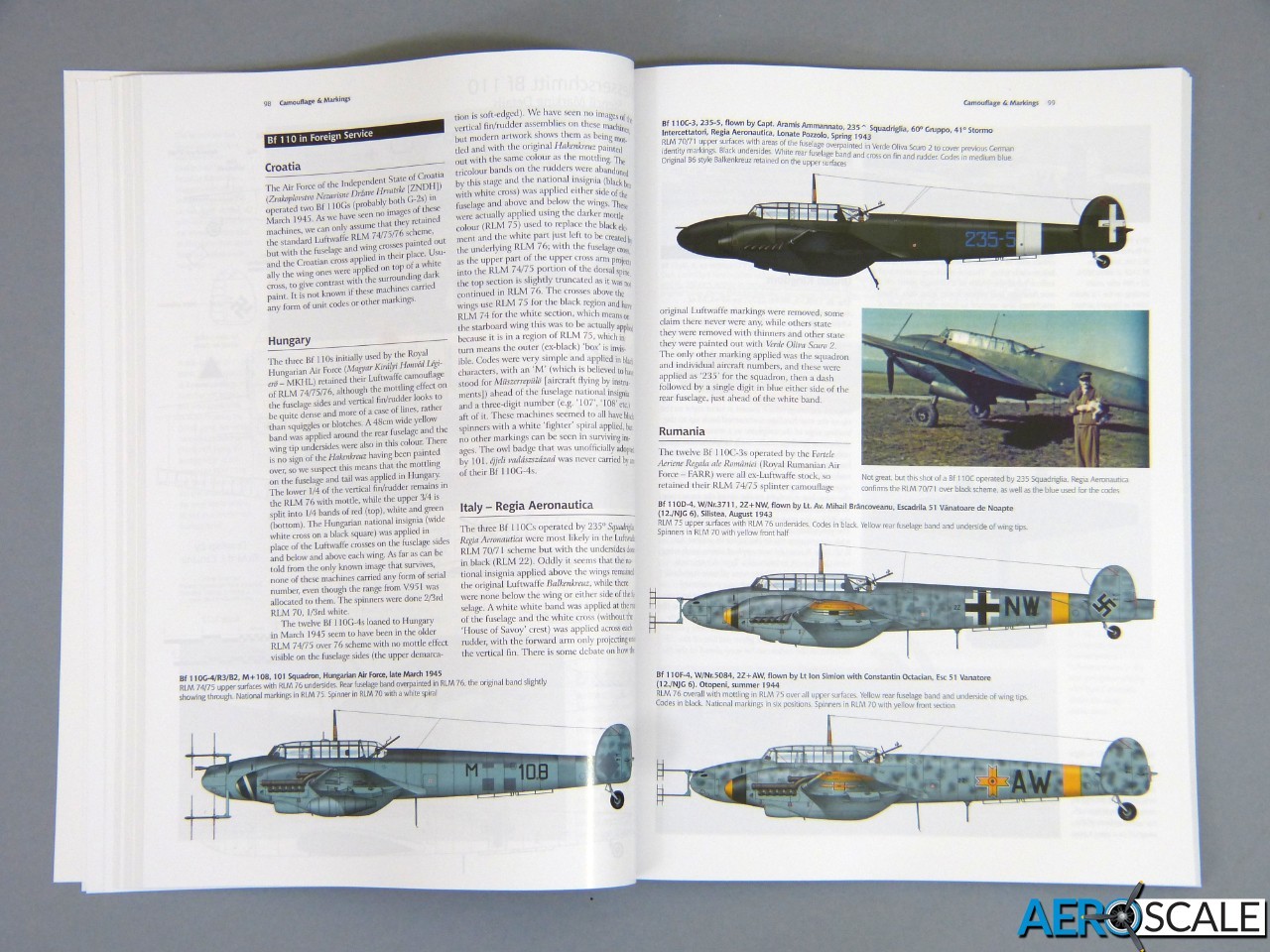 The modelling section begins with a useful selection of reviews of the many kits of the Bf 110 which have appeared over the years. 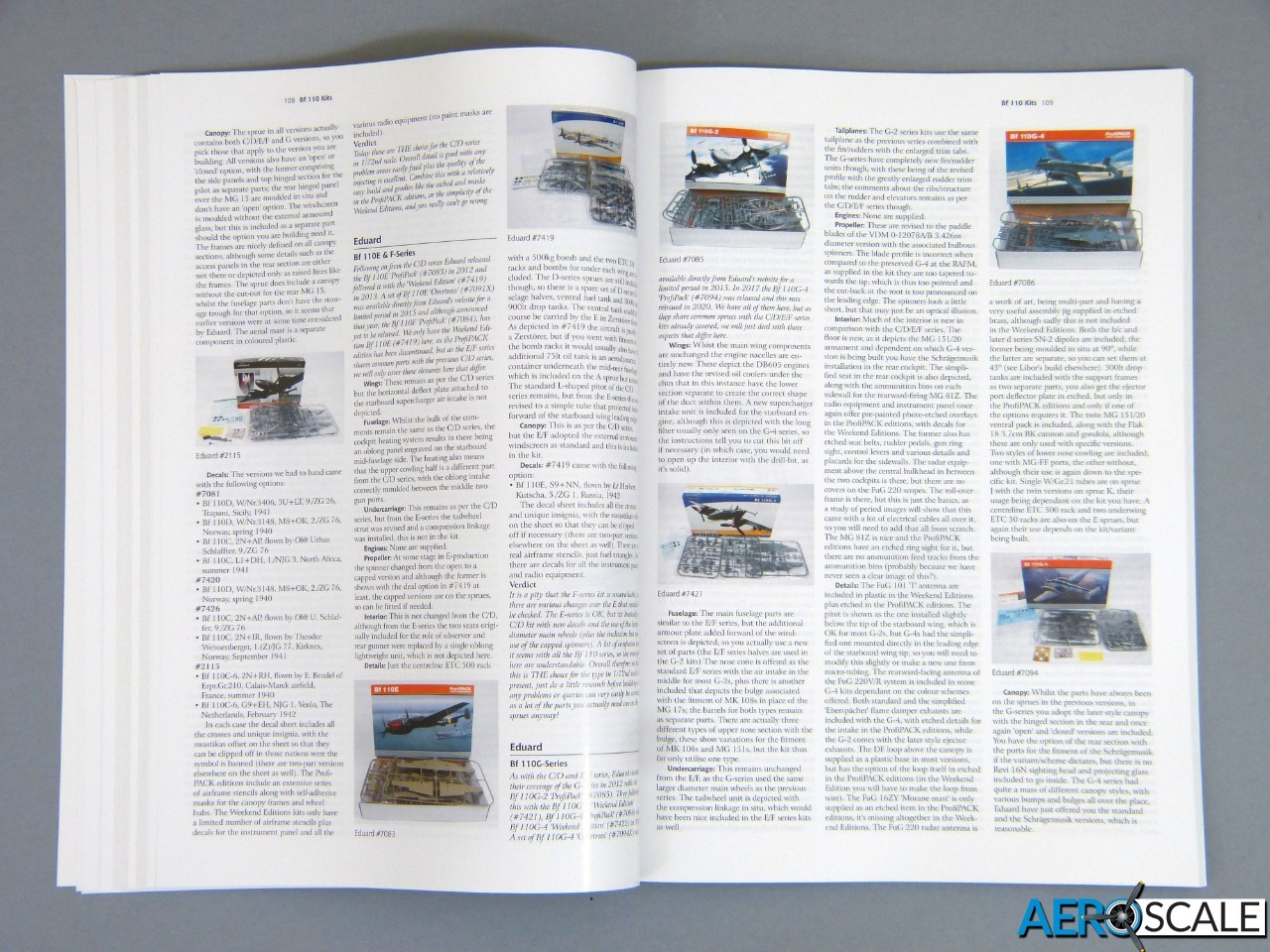 In Building A Selection, Libor Jekl tackles the 1:72 Eduard Bf 110G-4. As usual, Libor does a wonderful job in this smaller scale, with the finished model easily being mistaken for a larger scale. For good measure there's a page of photos at the end of the chapter showing Eduard's 1:72 Bf 110D/D and 'G-2.

Steve Evans builds two models. The first is in 1:48 and, perhaps, a rather surprising choice; the classic Revell-Monogram Bf 110G which tends to overlooked these days. Steve does a great job and demonstrates what an attractive model the kit builds into.

The second model is in 1:32; Dragon/Cyberhobby's big Bf 110C-2/C-7 (in this case the Revell re-boxing). Having played a small role liaising with Dragon during the development of their '110s, I can vouch for how well detailed they are, and Steve's finished model shows just how impressive the kit is.

The trio of models is a great source of inspiration, spread as it is across three scales and showcasing different modelling styles and techniques. Each of the builds includes excellent step-by-step coverage, with plenty of colour photos to make everything clear. 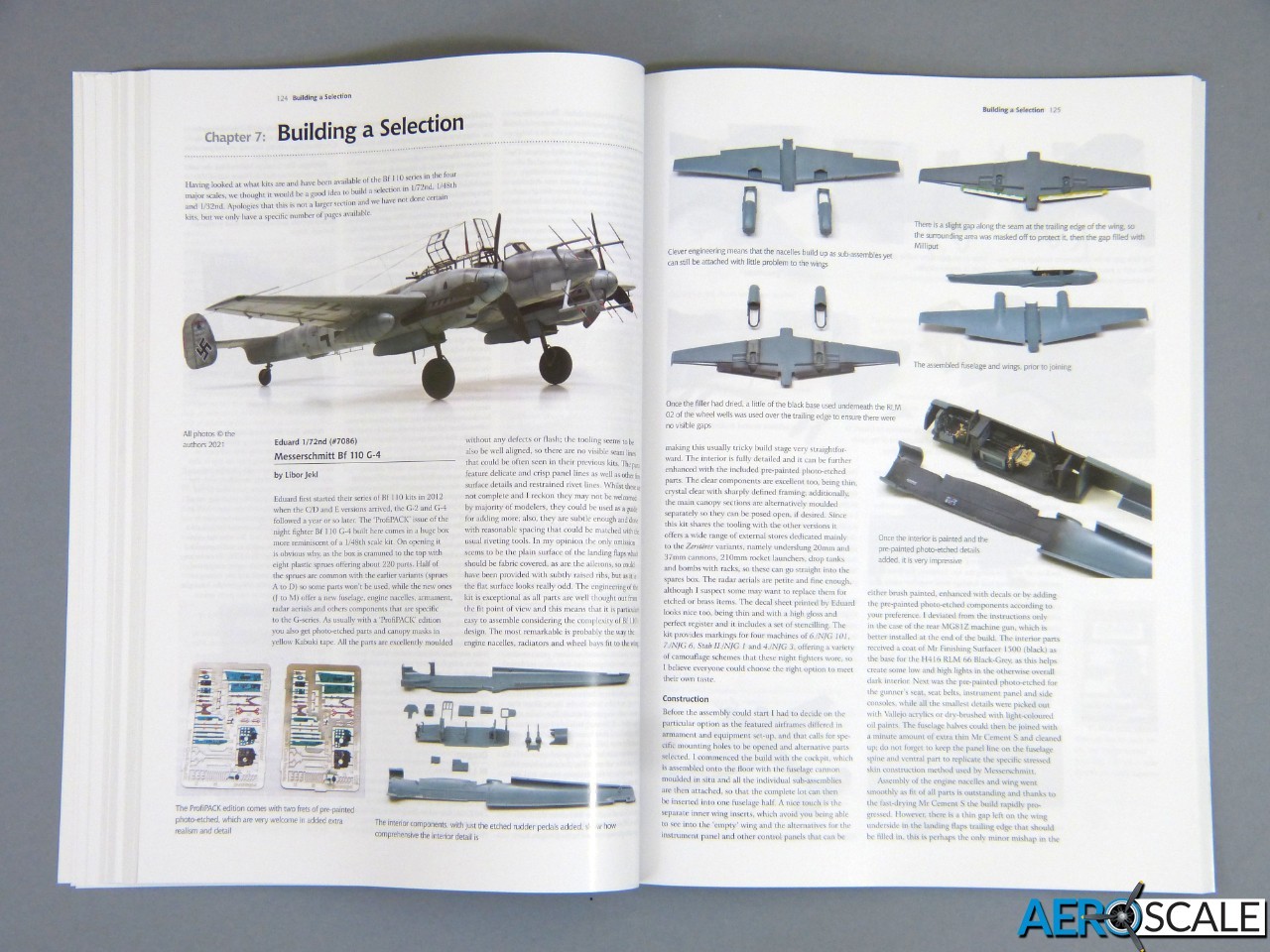 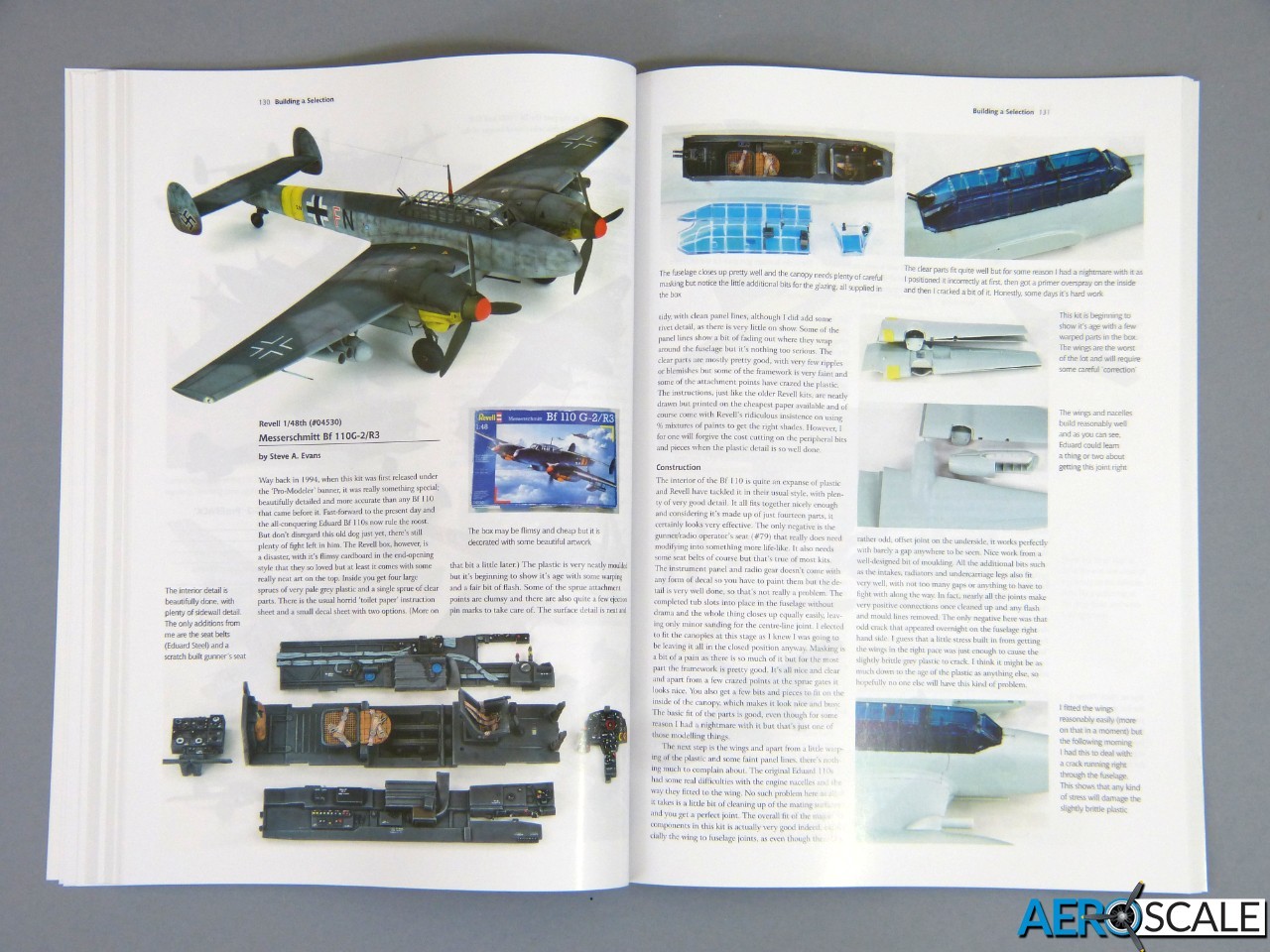 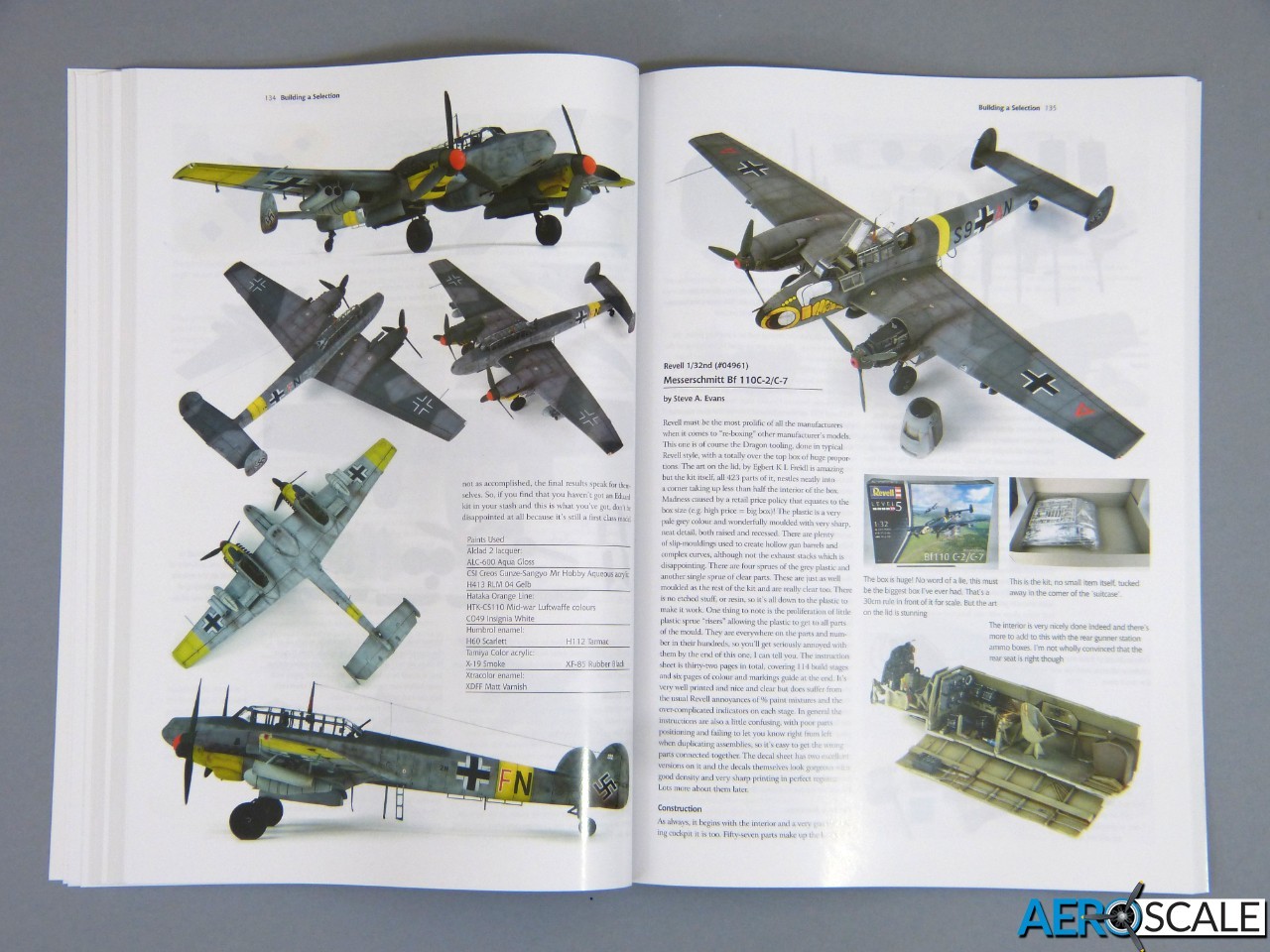 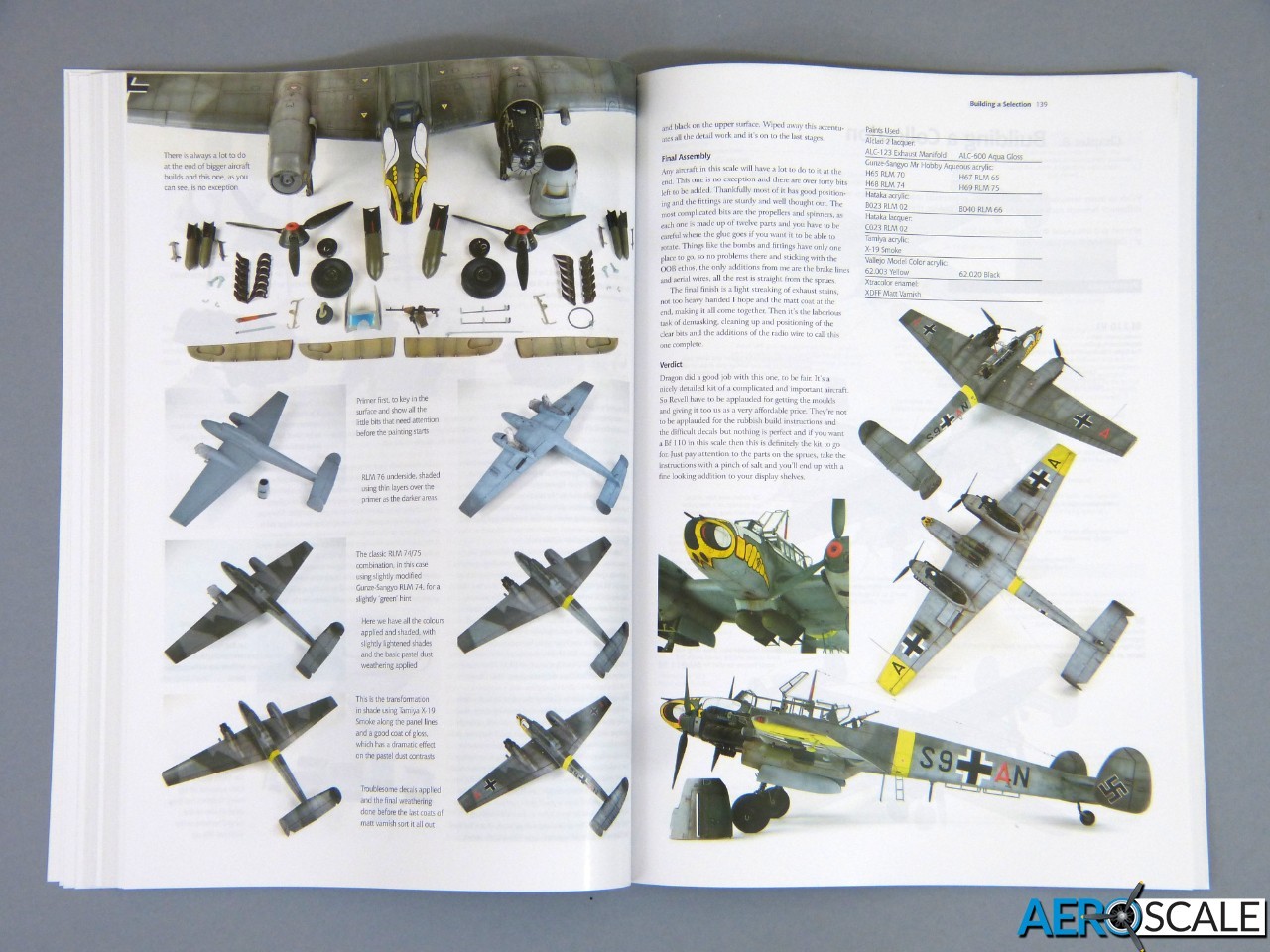 Building A Collection covers a lot of the same territory as Evolution, this time describing the variants with annotated isometric views by Wojciech Sankowski. While both approaches are useful, I find it frustrating flipping back and forth between them and I'm always left wishing the two sections could be combined into a single chapter that included all the information "under one roof", so to speak. 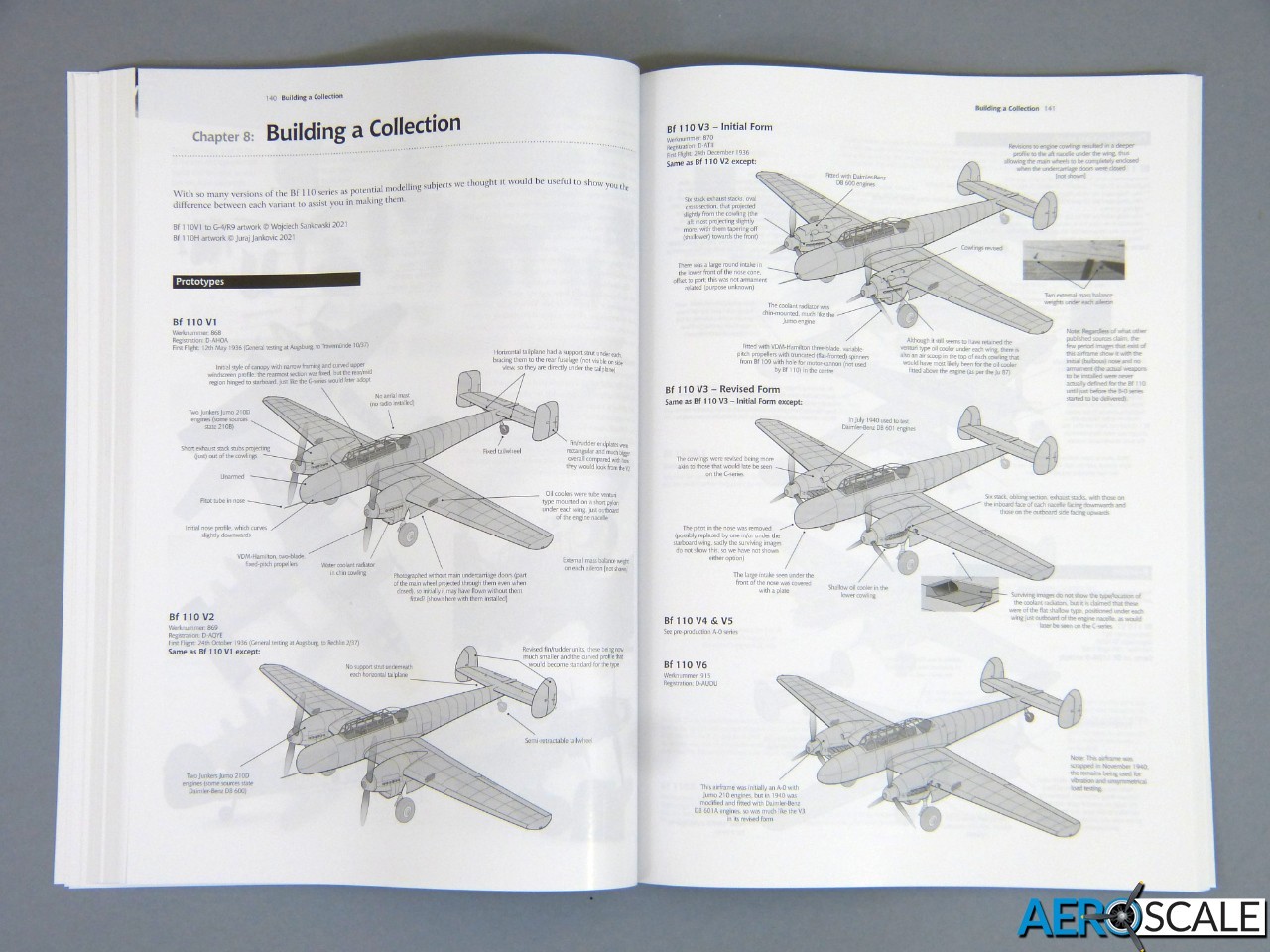 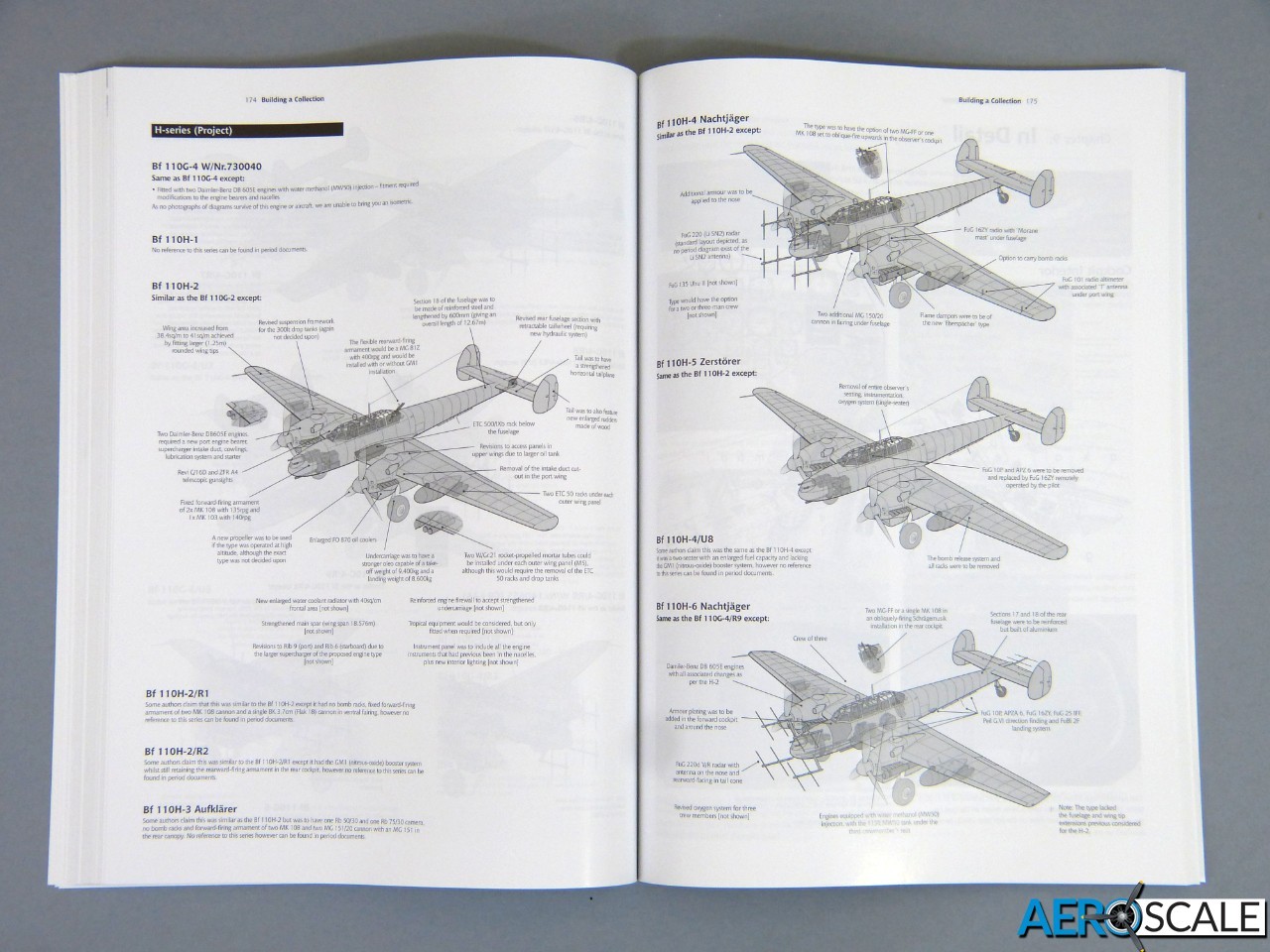 In Detail: The Bf 110 is a superbly comprehensive 66-page "walkaround", comprising a mix of vintage photos and illustrations from technical manuals with modern colour shots of preserved airframes.

The detail is exceptional and is clearly broken down into easily accessible sections.

Each section is further divided into sub-sections, combining to cover the Bf 110 in greater pictorial detail than in any reference which I've seen to date.

While you could justifiably argue that the walkaround belongs with the Airframe chapters, it is undoubtedly the reason many modellers will purchase the book, and it certainly doesn't disappoint, covering the variants of the Bf110 in considerable detail. 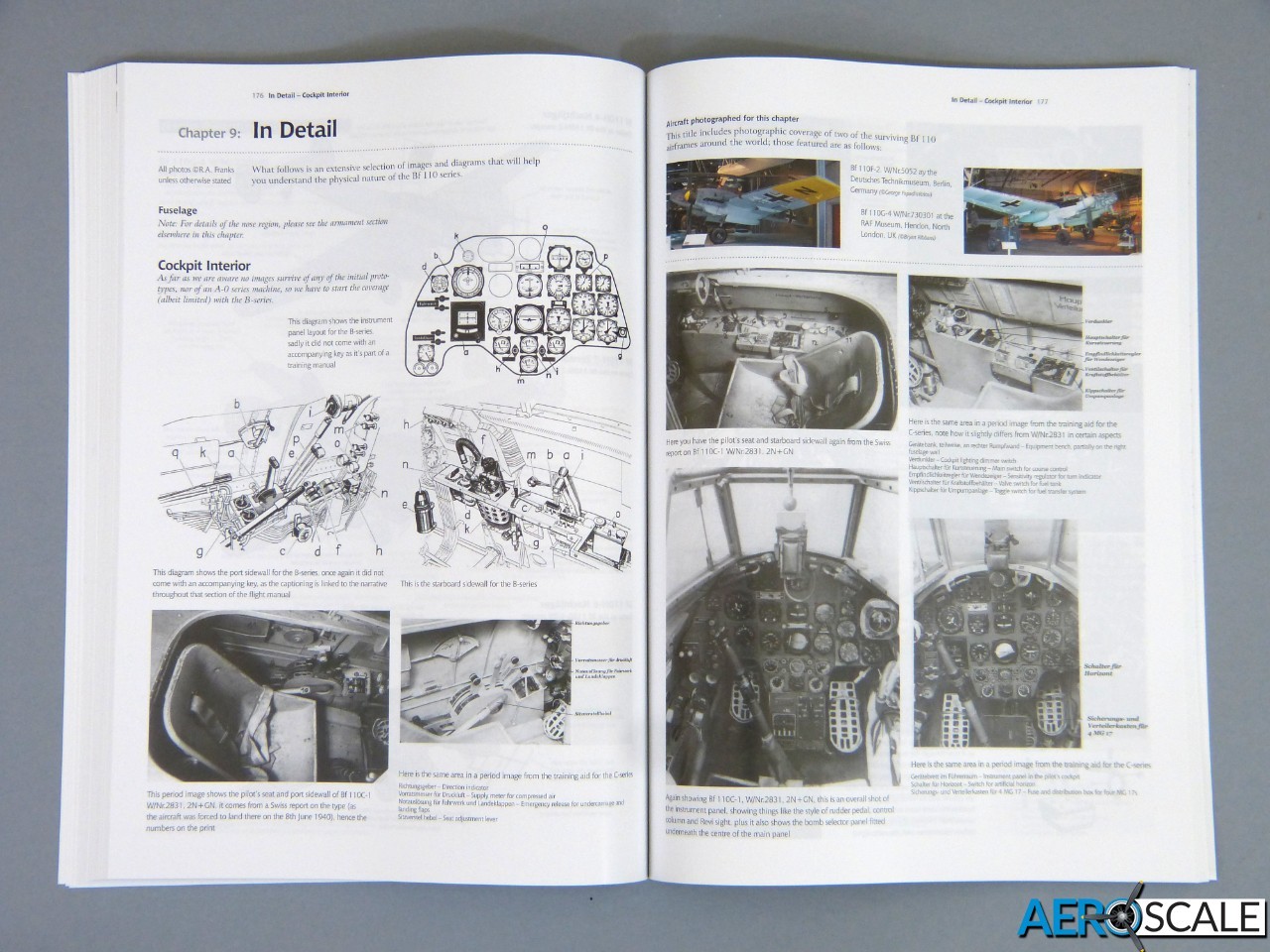 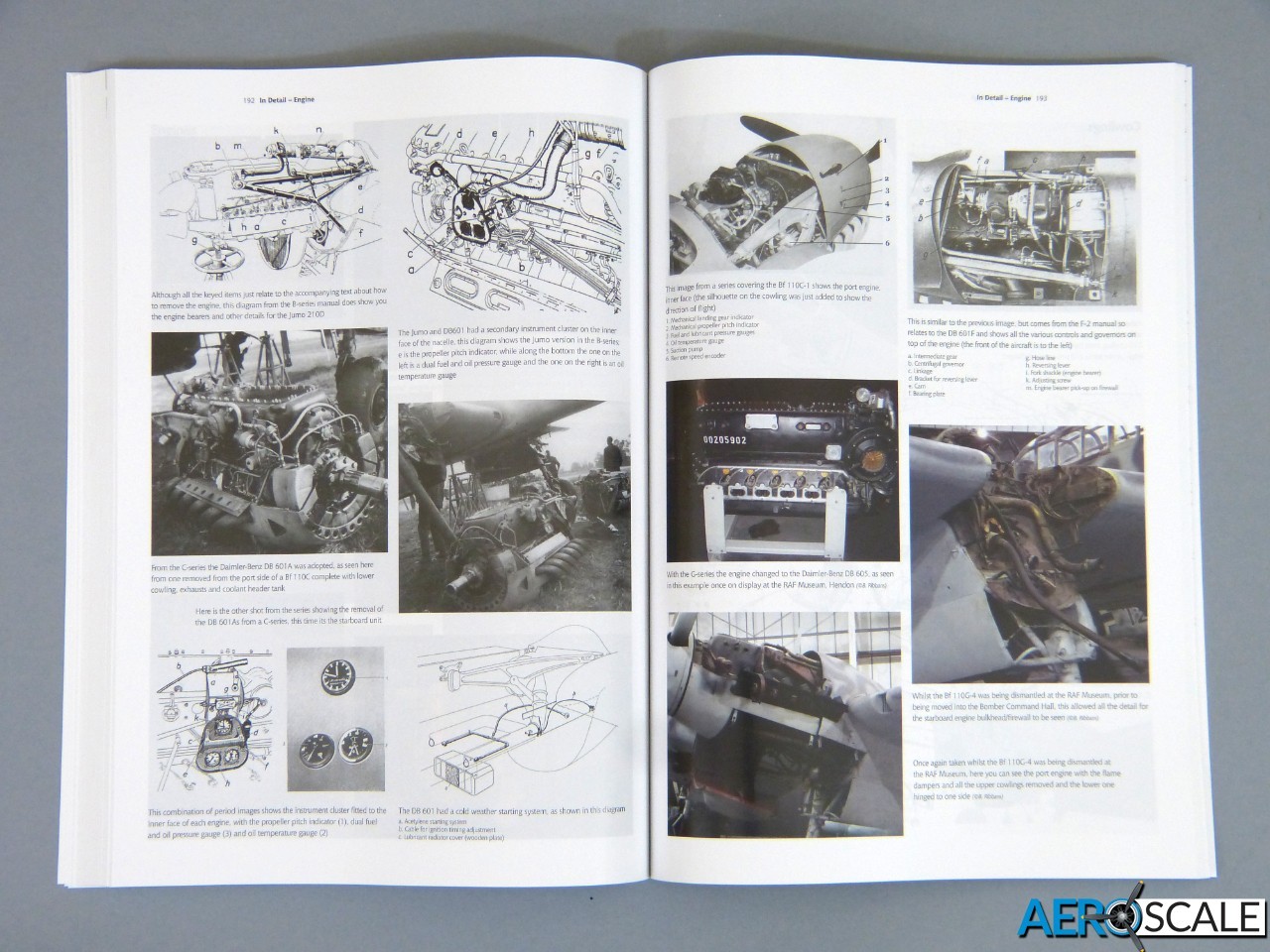 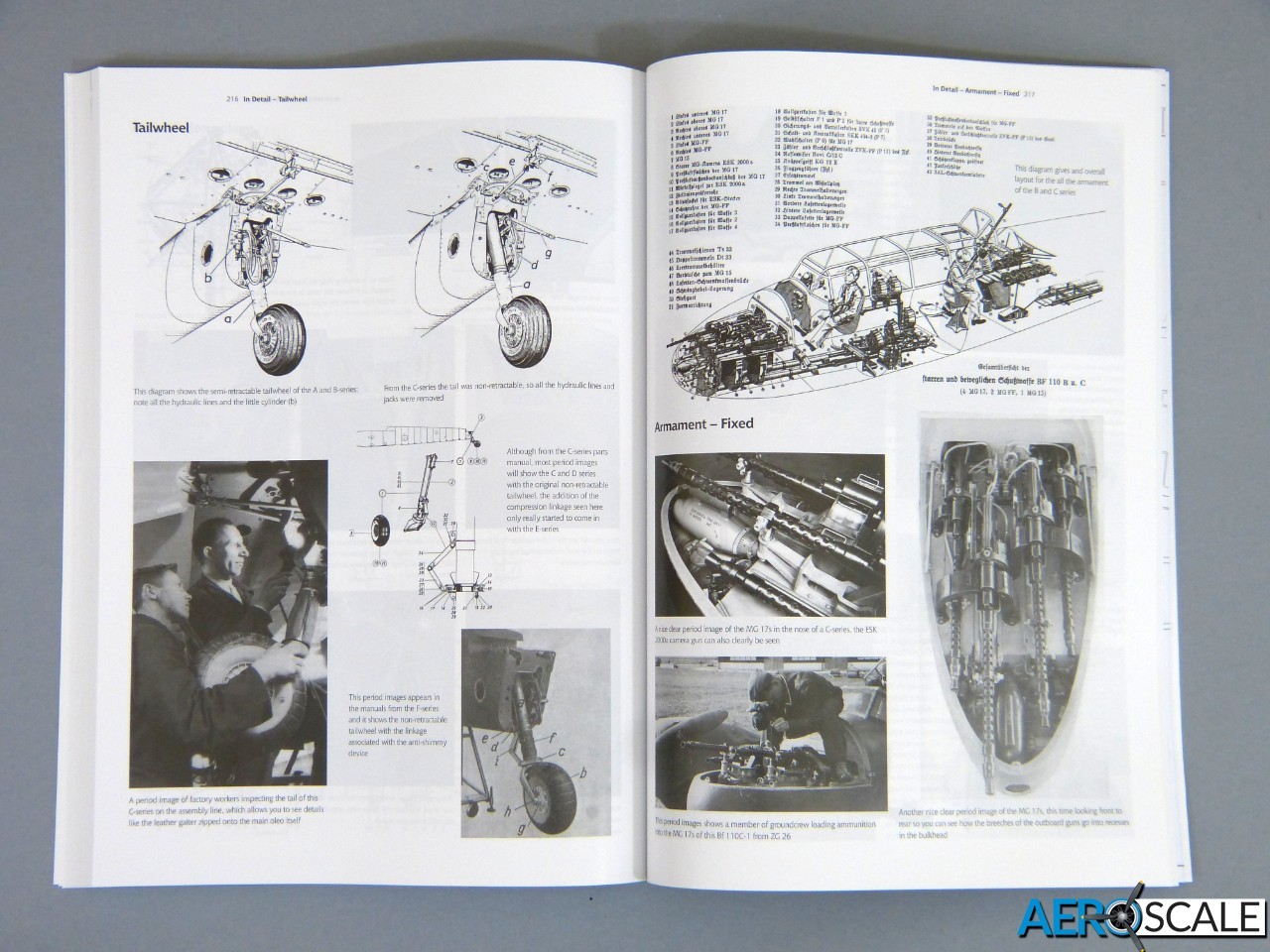 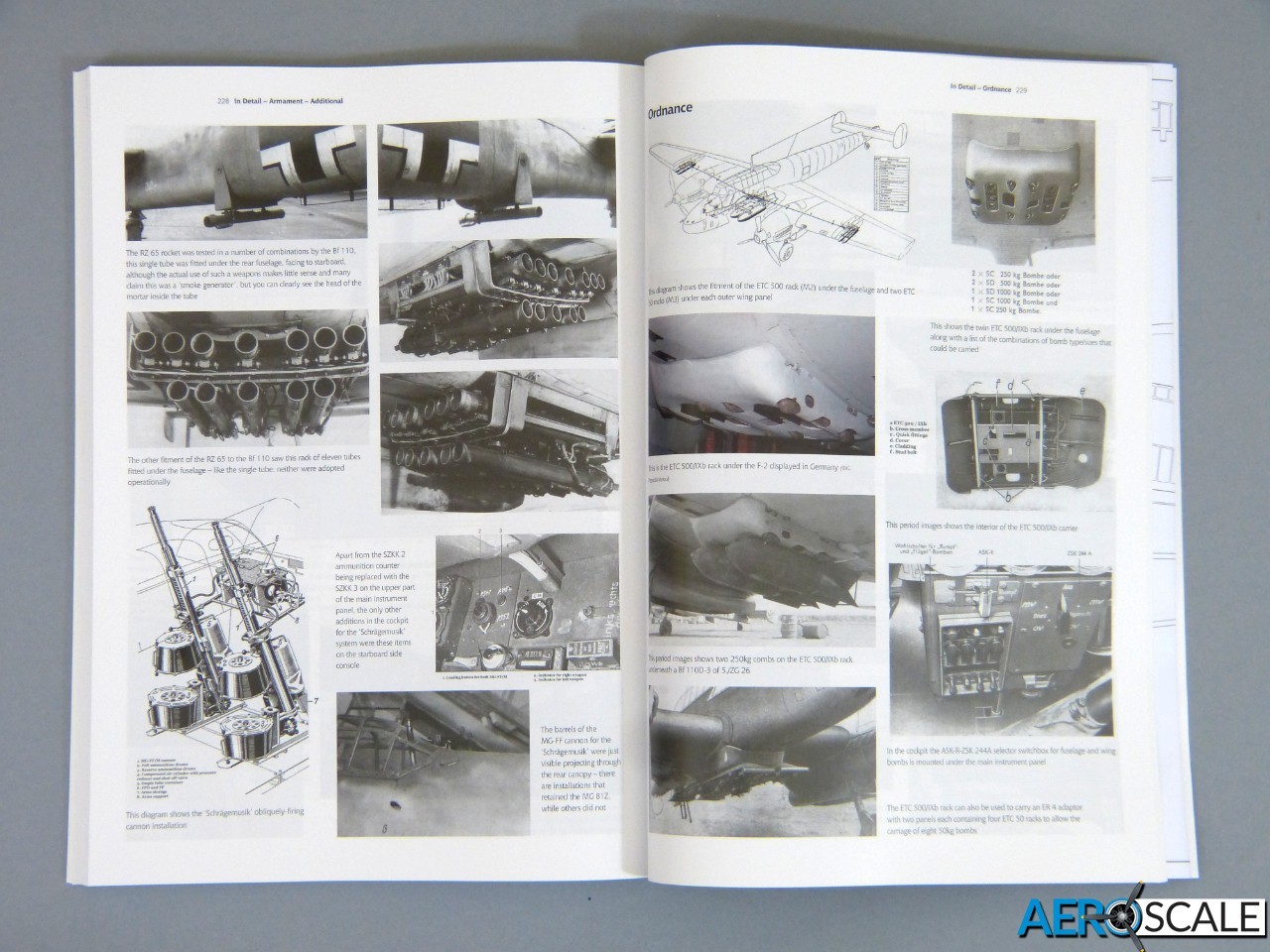 The Appendices contain comprehensive lists of the many Bf 110 kits and accessories that have been released over the years - some undoubtedly collectors' items now - plus a useful Bibliography for further reading. 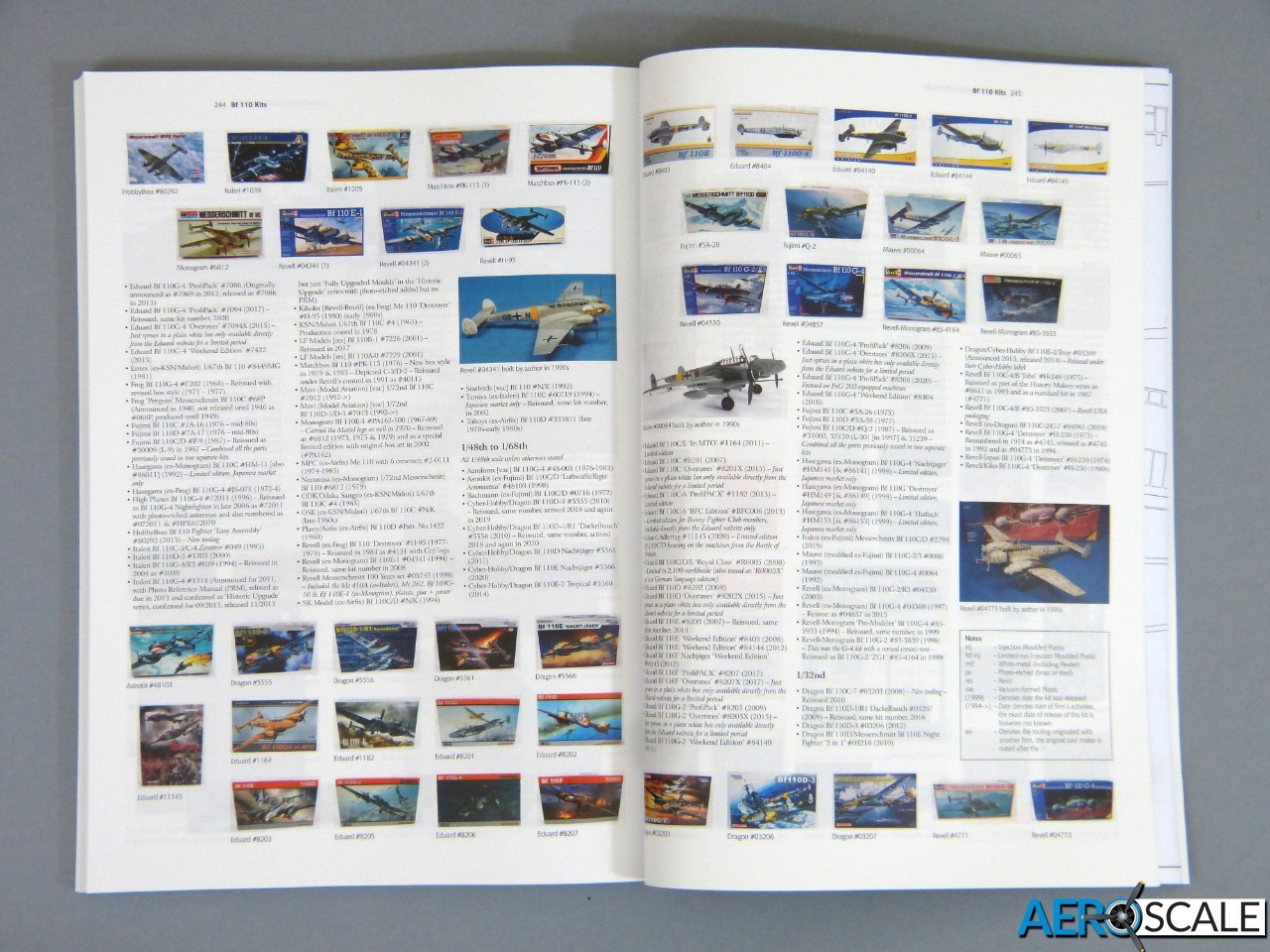 Completing the book is a fold-out spread of 1:48 scale drawings covering all the major variants. It's good to the fabric-covered flaps are clearly shown - something which kit manufacturers somehow seem to miss. 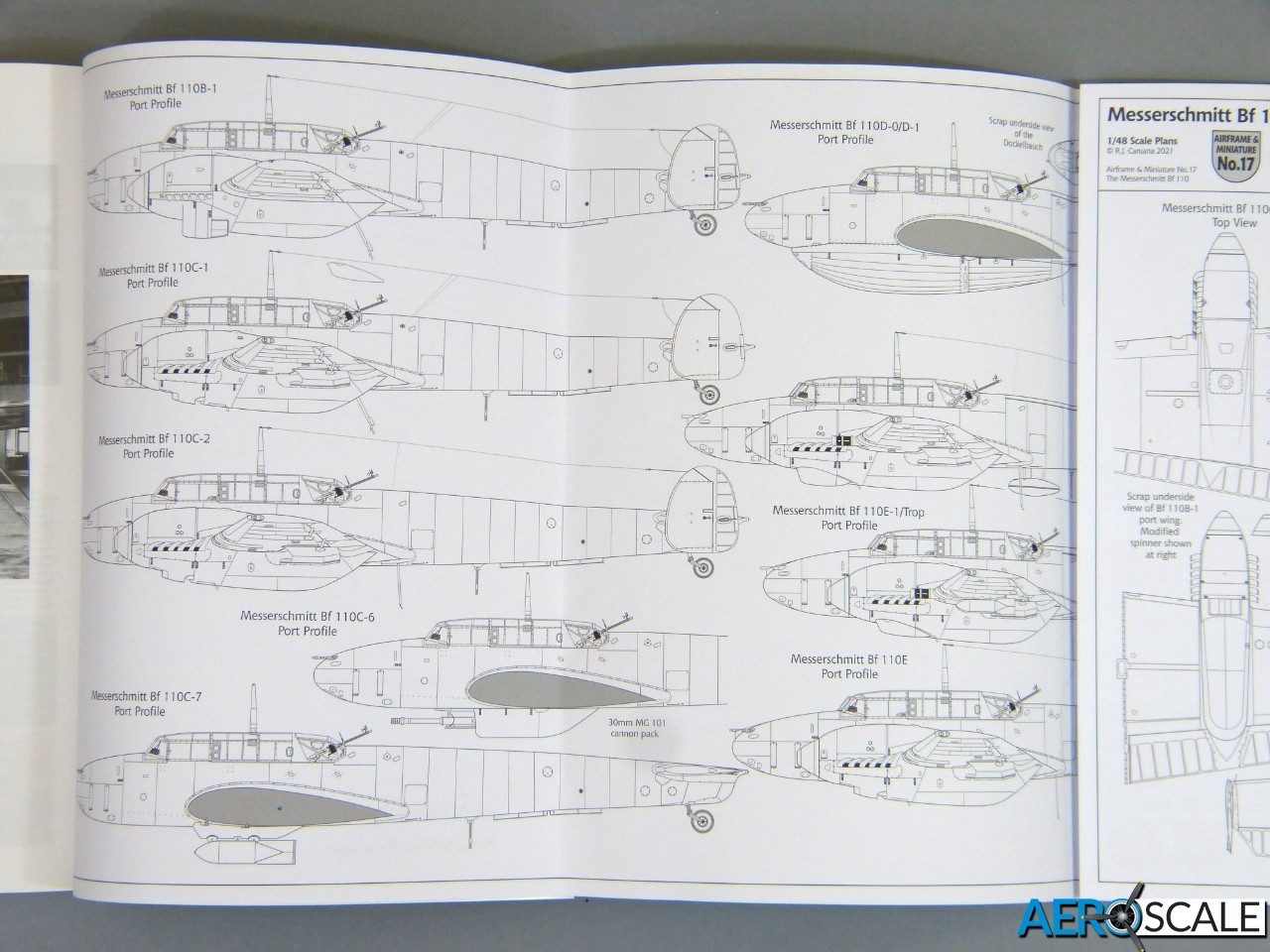 Valiant Wings have done a great job producing a Bf 110 study that will appeal to both aircraft enthusiasts and modellers alike. Its different approach and combined focus ensures that it will sit usefully alongside existing references which you may already own - and the highly detailed walkaround section is justification in itself to warrant a place on the bookshelf for anyone interested in Messerschmitt's famous aircraft.

Many thanks to Valiant Wings for providing the review copy.