Air Campaigns
Want to start or join a group build? This is where to start.
Hosted by Frederick Boucher, Michael Satin
OFFICIAL: Those Radial Fighters Campaign

Chaz and Collin, I didn't look over your shoulders!

Base coats on, and the instrument panel getting there!

Just gotta get the MiG 21 to make a little room around here!

I just finished my build! I've been making such incremental progress the last few weeks that I guess I forgot to take pictures along the way...oops. I also have to figure out my photography situation since my DIY photocube didn't exactly survive my recent move.

REPLY & QUOTE
SGTJKJ (Jesper) said
Beautiful work on the cockpits, Colin and Chaz! It is like twin builds in different scales

REPLY & QUOTE
YankeeSteve (Chaz) said
I was looking over your shoulder..... LOL

REPLY & QUOTE
SGTJKJ (Jesper) said
Welcome back, Raj. Seems like a nice rebound kit to get the mojo flowing!

I have added a metallic coat and some chipping fluid. First time I try the AK heavy chipping fluid, so it will be interesting to control and see the final result. 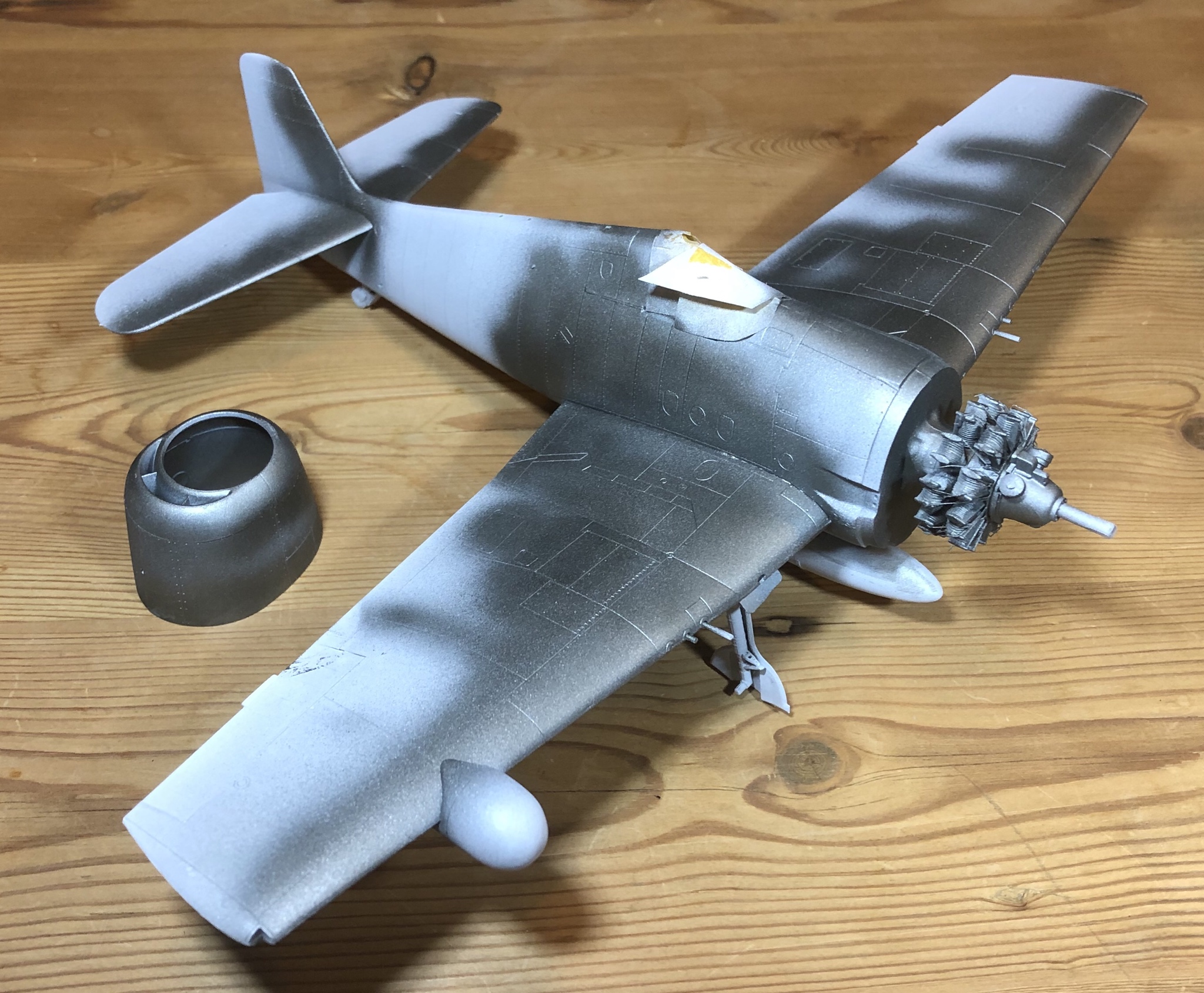 This will be my entry for the Campaign. Been suffering from severe loss of Mojo and I hope this will bring me back to the bench with full flow. 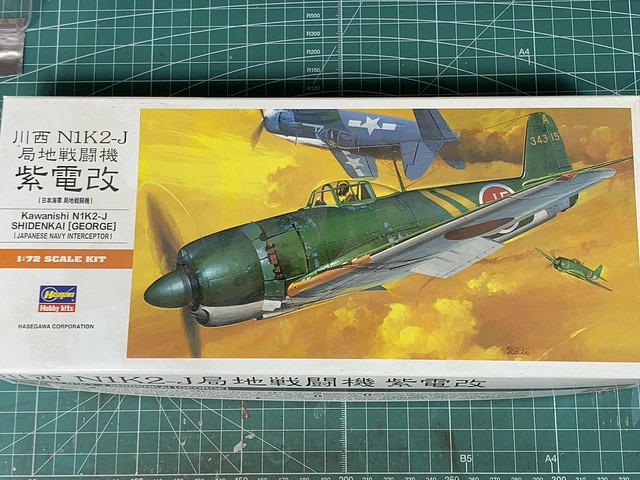 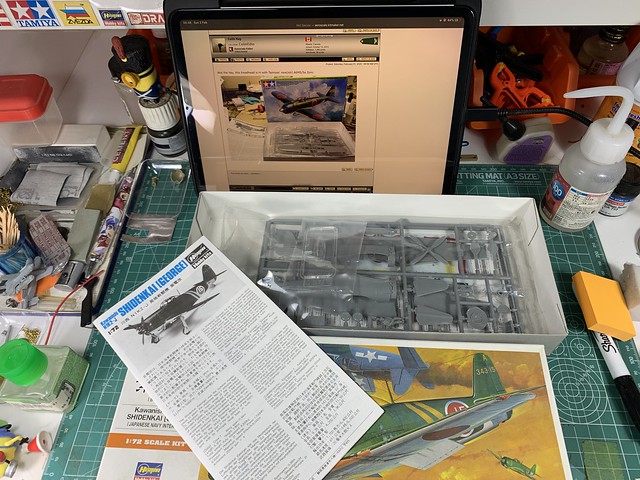 REPLY & QUOTE
On the Bench:
A Big mess 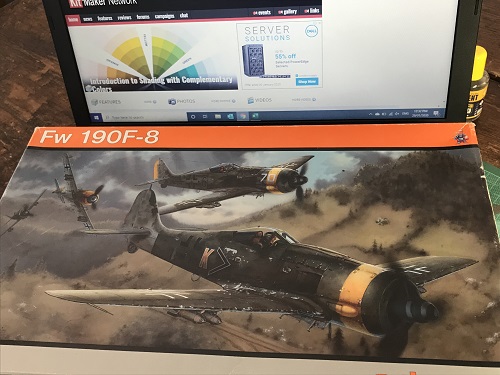 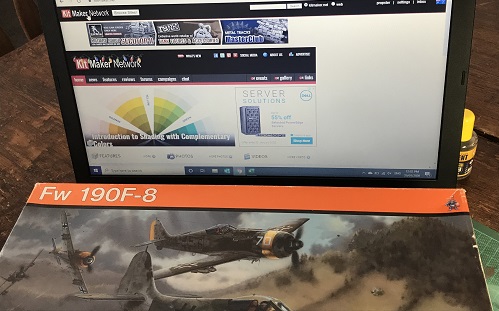 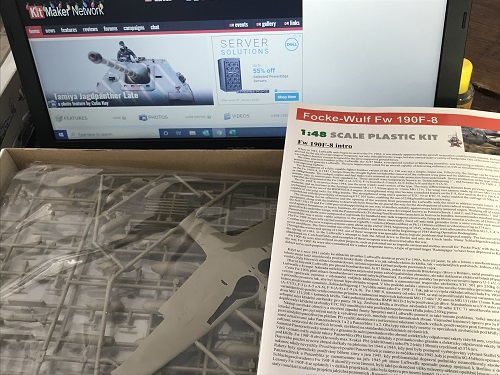 Franck your build is really coming out nice. I too am wondering how the Mig product compares to regular poster tack. Looking forward to seeing more.
Take care,
Don "Lakota"

For 4 years i've used poster tack for a couple of armor models. And when i have peeled the tacks, the paint came off and had a lot of shadow traces.

And I discovered this mig putty and it works like a charm: no shadows, adheres properly and removes perfectly without damaging the paint.

REPLY & QUOTE
HGBARNES (HG Barnes) said
I can offer a lower priced option which is the same as "panzer putty/MIG". It's called "HAND PUTTY". I bought my tin of it for 4 or 5 bucks from bang good in china works better than blu-tac in some cases. For your consideration. The powder blue color takes longer to droop.

REPLY & QUOTE
stoney (Eric Johnstone) said
would seem like its close to silly putty then?

I also wonder how the Mig stuff compares to plain old poster tack.

The Mig stuff is more like the slime toy that kids play with; poster tack is much firmer and has to be kneaded to soften it up. Now, the Mig can get tangled in PE and stuff but you can work it out if you are careful.

REPLY & QUOTE
Buckeye198 (Robby) said
Franck, that is outstanding! How tight can you get the borders when you use the Mig putty? The pictures you posted look like there's a nice hard edge with minimal to no overspray...exactly like what I was going for but couldn't achieve with frisket film haha! I also wonder how the Mig stuff compares to plain old poster tack.

First: masking, chipping with masking fluid on the wings edge and a coat of tamyia XF-62 And here is the result ! maybe it's a bit late, but I would like to participate in this campaign with this nice little kit

The model will be build OOB, but I hope that it will capture the look of the real Hayabusa when finished.

My Hellcat is coming along. It is based and ready for camouflage. More to follow 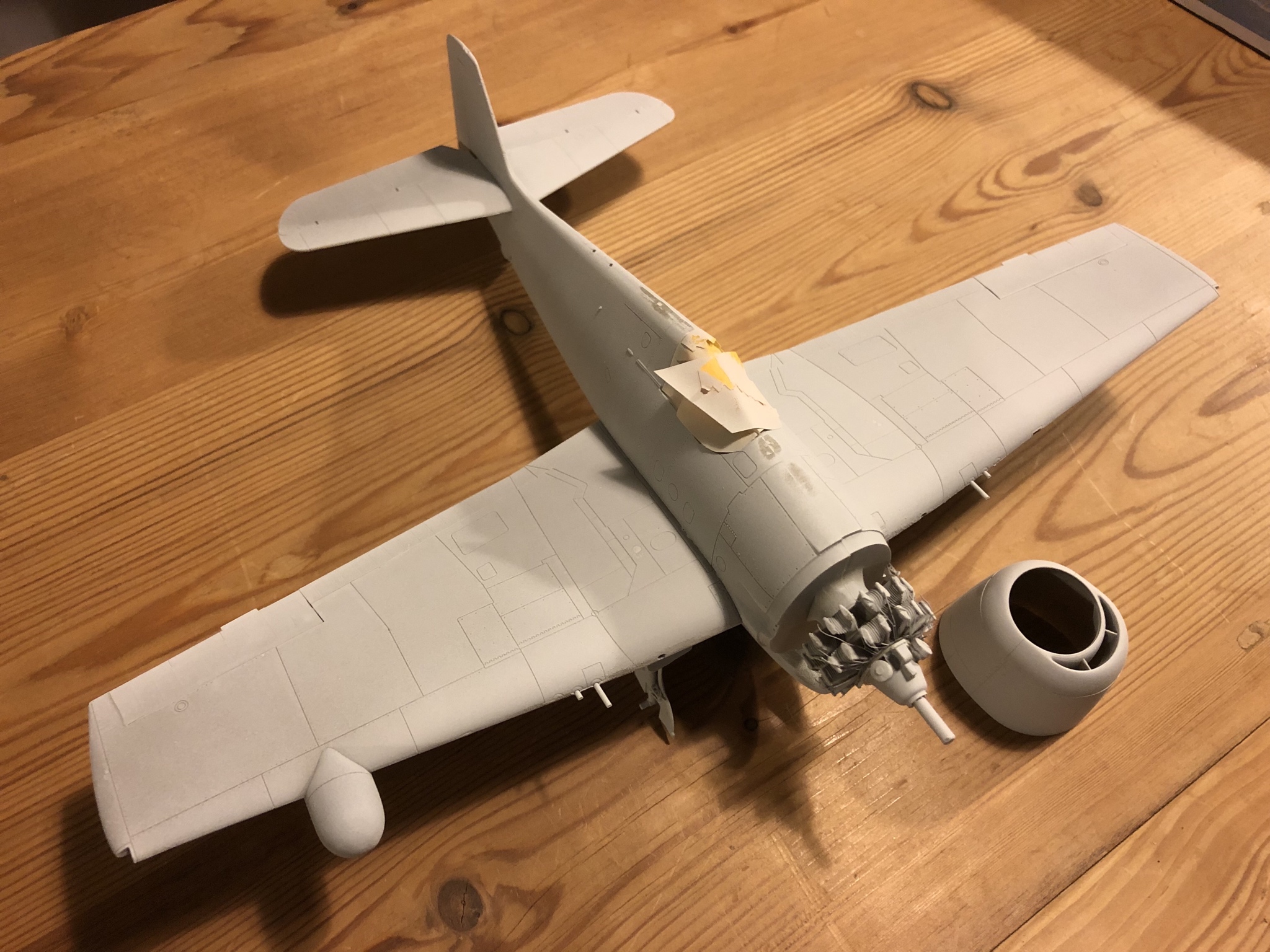 Franck, who's Buffalo is that? I'm pounding away on the old Airfix bagged kit. Not nearly as nice as yours.

It's the brewster Buffalo from Tamiya in 1/48th.

The cockpit is painted in flat aluminium.

it'll be really apparent when I'm all done and the markings are finalized, but for now just know that I'm NOT going for 100% historical accuracy nor 100% building perfection. And now, back to the update

So the underside patches were sanded lightly and resprayed with white primer and then the blue. Honestly did not turn out too good, but again, see the above paragraph! It's good enough for me right now, and I'm not planning on setting this on a mirror-base anyway. The patches that remain along the leading edges will be touched up with aluminum, reflecting the few parts of the plane that were metal. The landing gear assemblies were then put into position; without real guides molded onto the pieces, it's a real guessing game where the gear covers are supposed to go. I just aimed for symmetry, and I think I accomplished that. 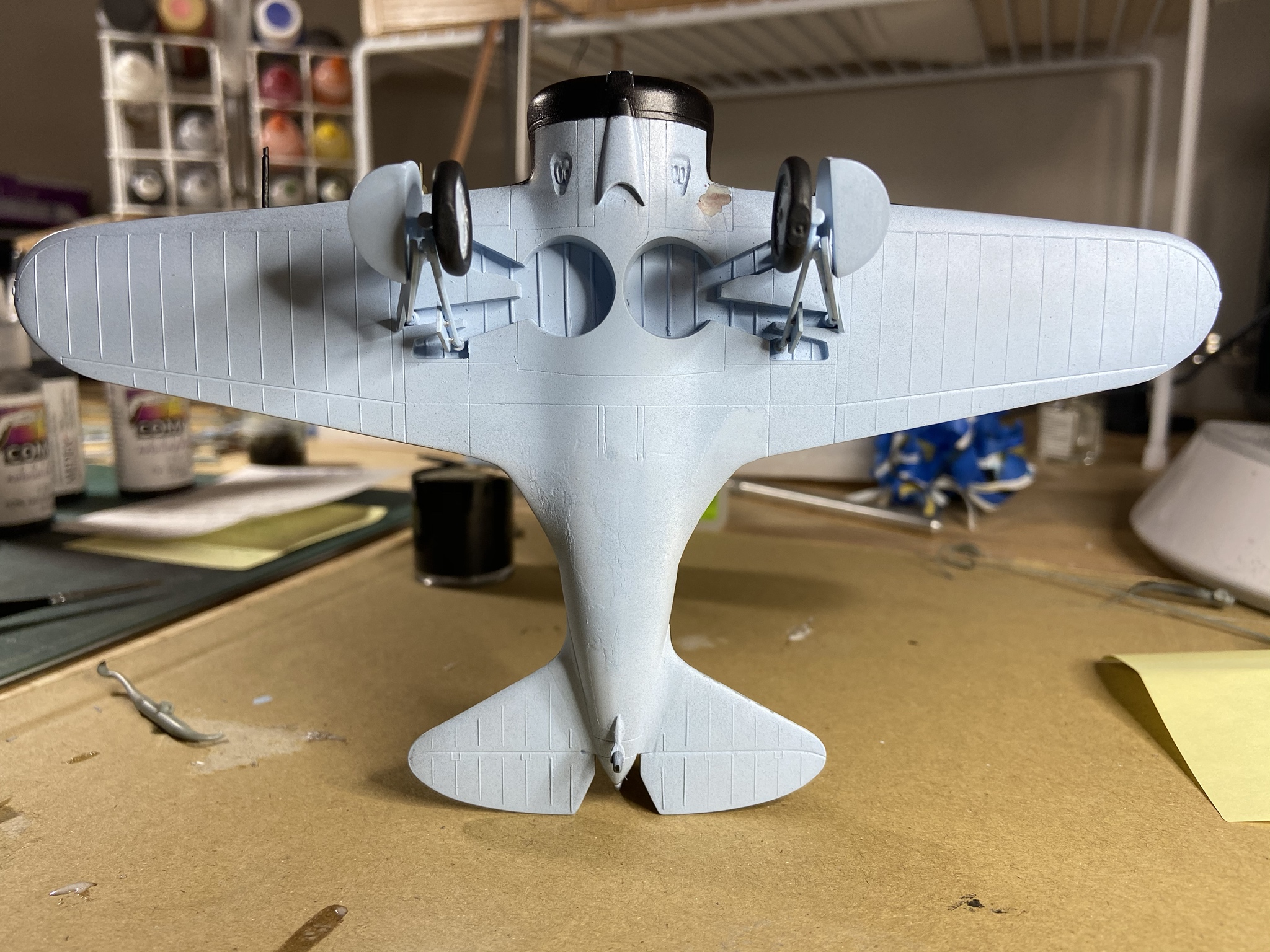 I also touched up topside. After struggling with the masking, I just did what made me happy and sprayed over the black patches freehand/soft-edge. It really turned out well, though I'm a tad upset that I still won't have a hard-edge camo model on my shelf. 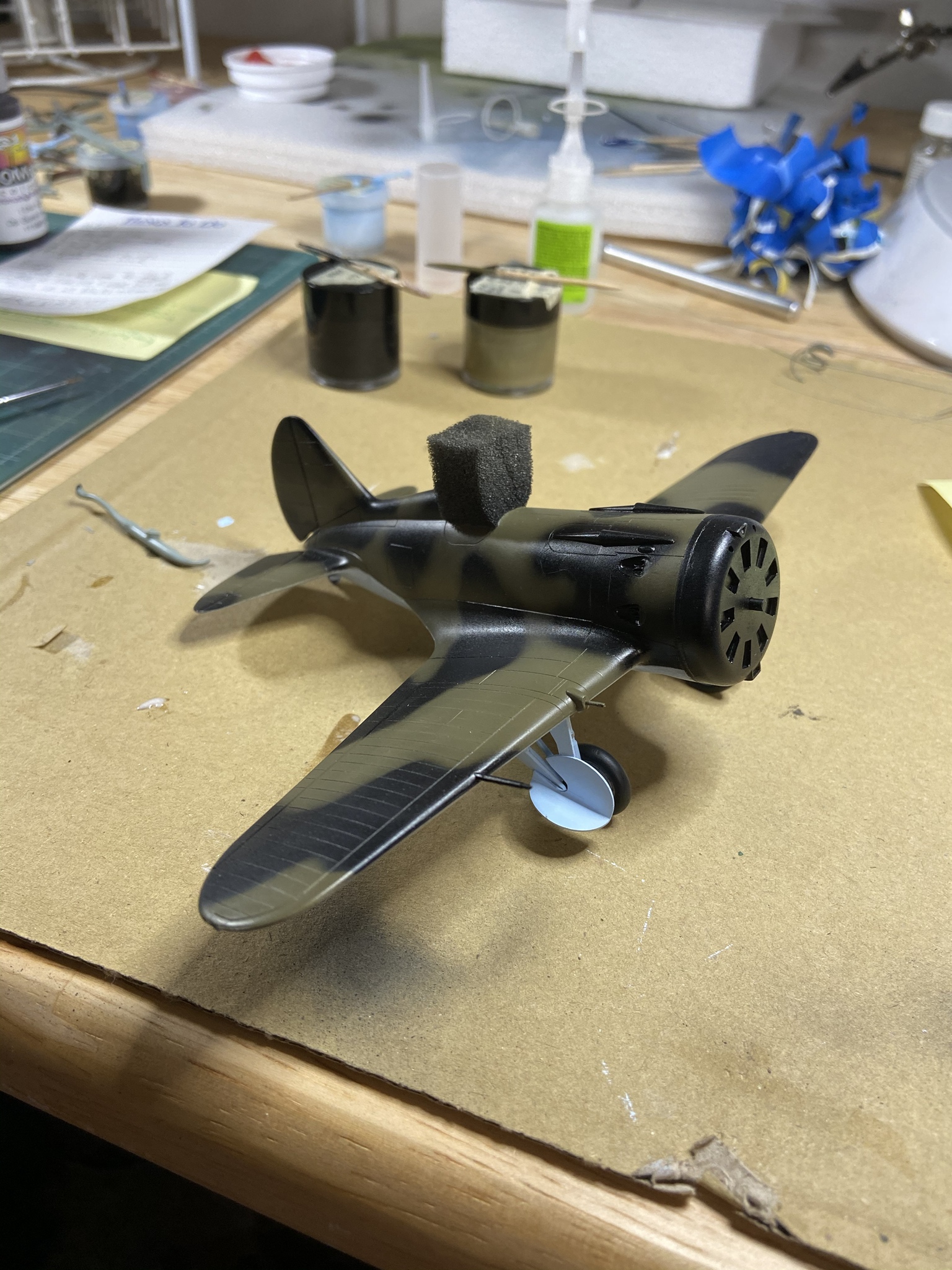 Almost ready for decals, weathering, and the final touches!

REPLY & QUOTE
md72 (Mark Doremus) said
Franck, who's Buffalo is that? I'm pounding away on the old Airfix bagged kit. Not nearly as nice as yours.